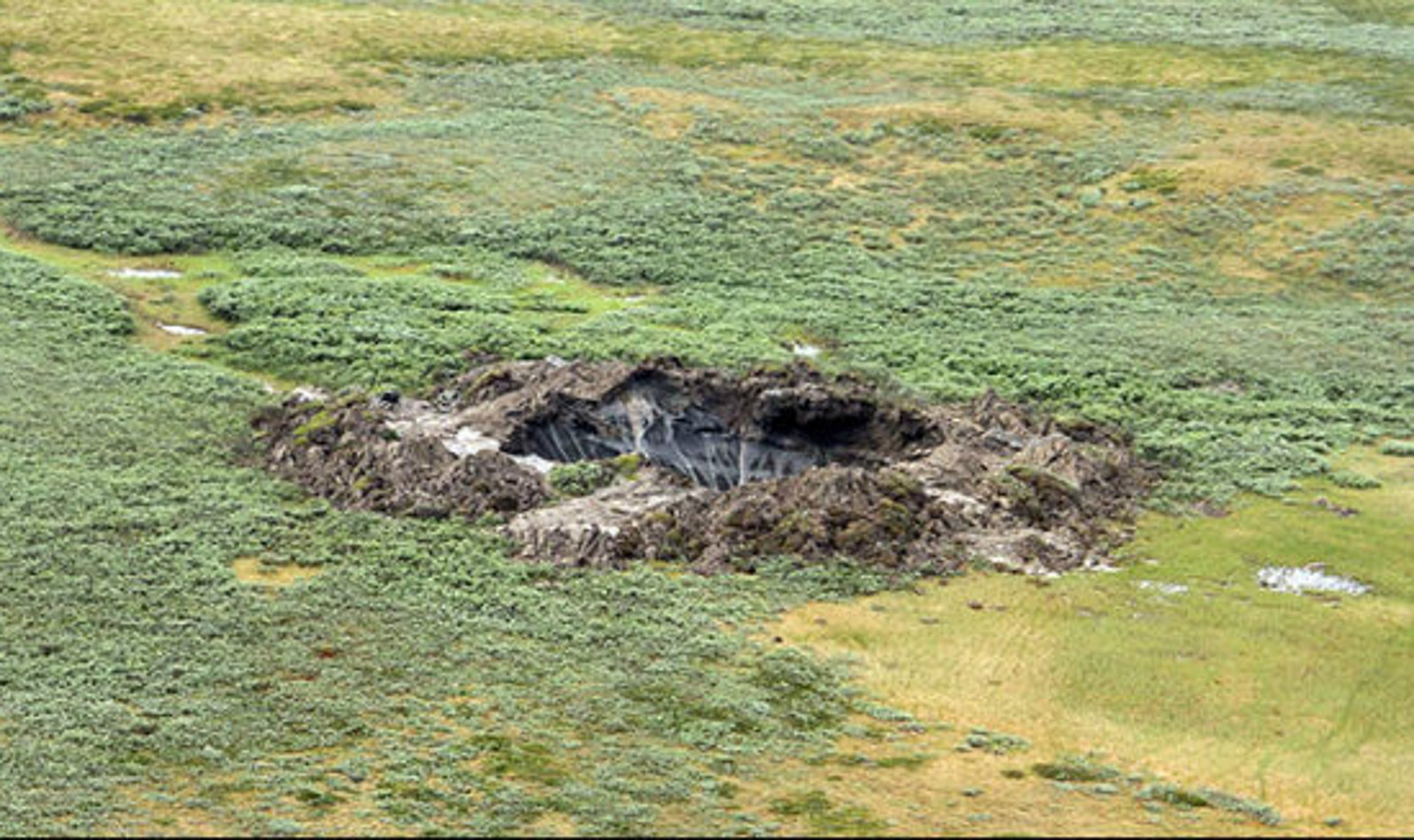 It was a ticking time bomb.

For decades with rising global temperatures, scientists have been anticipating an abrupt release of stored greenhouse gases from melting Arctic permafrost.

The investigation following the recent discovery of a Siberian crater bigger than an Olympic-size swimming pool is revealing that deep permafrost thawing – and thus the release of greenhouse gases trapped within – could now be happening.

That speeds up warming in the short-term while committing our planet to warmer temperatures for centuries.

And it makes the discovery of the seemingly bottomless crater in Siberia so much more concerning – especially as two additional, smaller holes were found in the same remote area soon after. 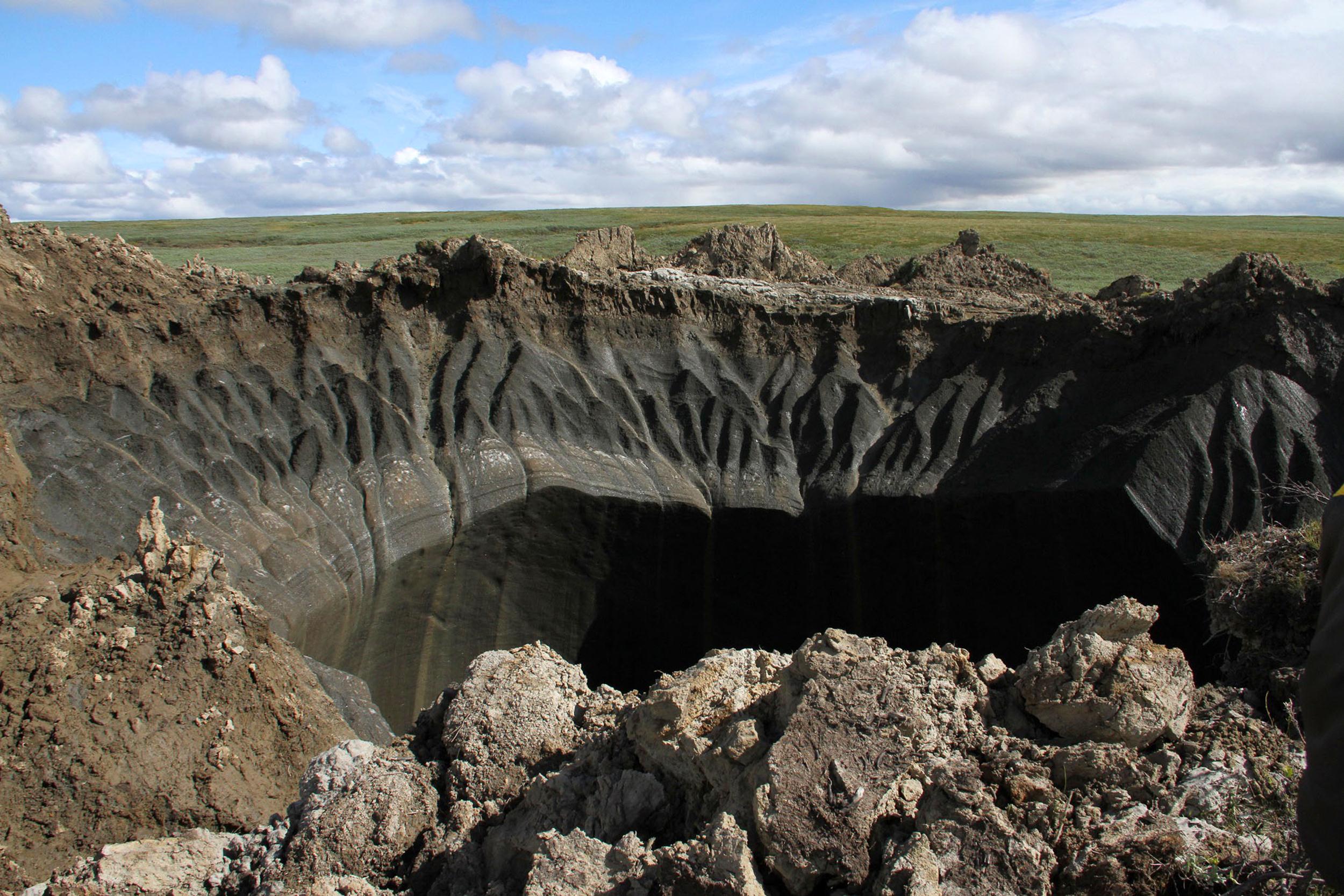 What Created Huge Holes in Siberia?

Permafrost is soil that’s been frozen year-round for at least two years, and it can be as deep as 5,000 feet. Nearly a quarter of the Northern Hemisphere is covered by permafrost.

We’re now learning that those eerie craters in Siberia were likely caused by thawing permafrost:

The Arctic is warming at a remarkable pace – twice the rateof the global average.

Because the permafrost depends on air temperature, it gets warmer as the Arctic warms.

Climate projections suggest extensive permafrost loss over the next century, anywhere between 10 and 90 percent. The wide range is due to uncertainty in model simulation of soil and snow process, but regardless, the melting would be irreversible on human timescales.

Why Melting Permafrost Affects our Climate

When the permafrost thaws, previously preserved organic material (plant and animal remains) decompose. This releases the heat-trapping gases carbon dioxide and methane into the atmosphere.

Further, large deposits of methane gas known as methane hydrates are trapped in ice at deeper depths than the organic material, and become unstable at higher temperatures causing an eruption of methane.

Scientists say the Siberian crater in Yamal is at least 150 feet deep, meaning that it’s possible it was caused by a massive methane hydrate eruption.

Emissions of methane from melting permafrost is bad news. Methane traps 84 times more heat than carbon dioxide during its first 20 years in the atmosphere.

But because methane is so potent and yet breaks down rather quickly, it significantly accelerates warming in the near-term. If the pace of warming is too quick, organisms can’t adapt or shift their habitats quickly enough and this can threaten their survival or entire ecosystems.

A faster rate of climate change can trigger irreversible events such as a collapse of the Greenland and Antarctica ice sheets.

When permafrost melts it also releases carbon dioxide which – unlike methane – doesn’t break down over time.

Organic material frozen in permafrost is estimated to contain nearly twice as much carbon than is currently in the atmosphere. Half of it is contained within the top 10 feet of the soil.

A third of the Earth’s soil carbon is contained in the Arctic permafrost and if released it could increase Earth’s temperature by nearly 10 percent.

While some carbon dioxide is taken up by the land and ocean, 40 percent is still there 100 years later, and 20 percent will be there after 1,000 years.

As carbon dioxide builds up in the atmosphere and traps more heat in the Earth’s system, it commits our planet to warming for centuries to come, and thus causes even more melting of permafrost.

Is There an Upside to the Siberian Craters?

Just as massive hurricanes, though devastating, can trigger climate action, the discovery of the craters may serve as a big wake-up call for policymakers.

The realization that permafrost is melting can also motivate nations to reduce short-lived climate pollutants now, alongside carbon dioxide reductions. That can significantly slow down the pace of warming in the near-term and help us make progress in our lifetime.