The Cost of Captivity: Similarities in How Farm and Zoo Animals Suffer 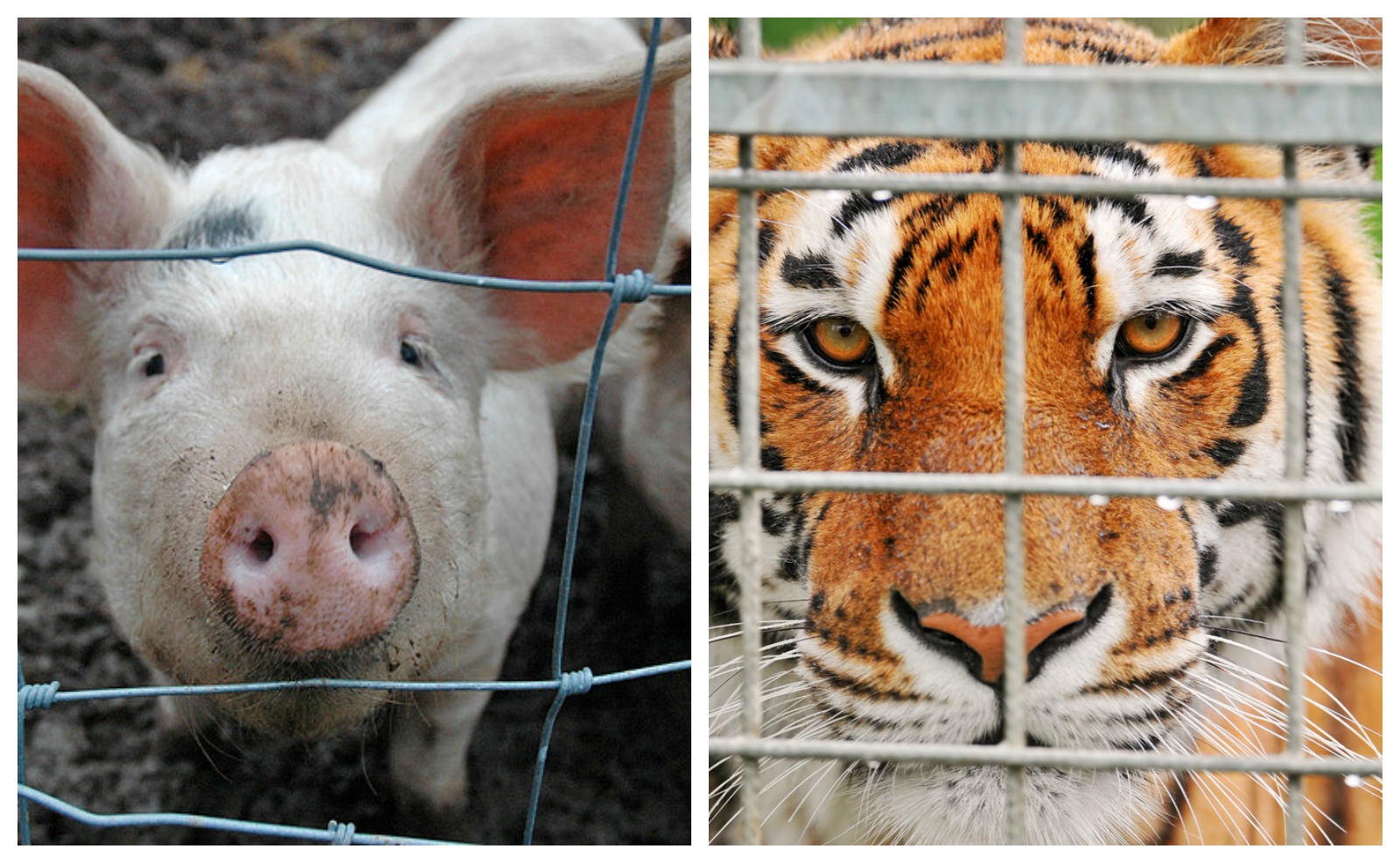 When we think of a dog or cat, we think of a member of the family. However, this is the only group of animals that we allow into our inner-circle, while others we view in terms of their use to us. Pigs and cows are for food; lions, tigers and elephants in zoos are for entertainment. These animals become commodities and as a result we take them out of their natural habitats, put them in cages and cease to see them as living, feeling creatures.

There are obvious differences between how we treat zoo animals and how we treat farm animals – one could arguably thank the glass walls in zoos for that – but when we put these animals in captivity and deprive them of the ability to express natural behaviors, they all begin to exhibit the same signs of mental and physical distress.

In the wild, animals exhibit a series of behaviors that assist in their survival. When they are taken out of nature and put in captivity, they are deprived of the ability to perform these behaviors.

In factory farms, animals are packed into filthy sheds where they live crowded with thousands of other animals. This environment completely inhibits their ability to perform natural behaviors, which triggers a stress response in animals that leads to heightened levels of cortisol. Cortisol can wreak havoc on the body’s immune system and as a result, animals are more prone to becoming sick. Given the fact that 99 percent of U.S. factory farm animals never get to exhibit natural behaviors, it is no surprise that 80 percent of pigs have pneumonia when they go to slaughter.

Animals who are kept in zoos are often held in environments that attempt to mimic their natural habitats, but fail to provide the same amount of space or mental stimulation. In addition to this frustration, animals are constantly subjected to visitors yelling and tapping on glass. A study published in the U.S. National Library of Medicine National Institutes of Health found that cortisol levels in zoo animals were noticeably heightened when large groups of visitors were at the zoo. Similar to farm animals, zoo animals seem to be more prone to illness and premature death is common.

Self-mutilation, sadly is exhibited by both farm animals and zoo animals as a coping mechanism for the extreme levels of stress, frustration and boredom they face in daily life,

Pigs, cows and chickens are all highly intelligent and social animals. While we might think they don’t feel pain or understand their own emotions, they possess all the same abilities to feel pain and fear and can even anticipate future suffering. This bleak existence takes a toll on the mental well-being of farm animals and self-mutilation has been exhibited in virtually all forms of factory farm animals. To limit the damage animals can do to themselves, their teeth, claws and beaks are often removed.

For zoo animals, self-mutilation is defined as a stereotypic behavior that is thought to be a symptom of great mental distress. Over-grooming, biting themselves, or pulling out hair are the sad signs of an extremely unhappy animal. Chimpanzees are highly self-aware, intelligent and emotionally complex. They are especially susceptible to these behaviors, and captive dolphins and orcas are also know to have resorted to self-mutilation, caused by the mental distress of being confined to tanks.

In the wild, aggression has its place. However, in captivity, animals who are normally only aggressive when provoked become incredibly aggressive towards one another, as well as their human caretakers. When you mix stress and frustration, aggression only seems to follow.

If you were crowded with thousands of other people who were constantly invading your personal space and stepping on you, you’d act out aggressively too. To limit the damage that animals do to one another in factory farms, chickens and turkeys are debeaked and their longest toe is cut off. Pigs have their teeth clipped and cows are dehorned.

Aggression in animals like lions and tigers is more common than others, due to their predatory nature. However, other animals who are considered relatively docile, like elephants become highly aggressive in zoos. There has never been a single documented case of orca aggression against humans in the wild, but at SeaWorld alone there have been over 100 logged incidents of orcas acting out aggressively towards humans, some of which tragically ended with fatalities.

Bar biting is another stereotypic behavior exhibited by captive animals who chew incessantly on their cages.

Bar biting is especially common amongst pigs who are kept in cages. Female pigs are often confined to gestation crates which are so small they can’t turn around for their entire lives. When the only thing you know is life in a cage and the cage is the most entertainment you get, it is no wonder pigs take to biting on the bars.

Zoo visitors often mistake animals biting on their bars as a sign that the animals wants to “say hello.” This is actually a sign of mental distress and many animals bite so hard on their cages they break or wear down their teeth.

In the wild, animals would have no reason to pace, they are able to roam at will and are constantly reacting to external stimuli. Pacing back and forth is another known stereotypic behavior.

The majority of animals on factory farms do not have the luxury of space that would allow them to pace – sad, huh? But free-range chickens are allowed a relative amount of space to move around. People often think hens pace because they have “bird-brains” and don’t know what they’re doing. In reality, hens pace back and forth and vocalize high-pitched calls when they’re stressed and frustrated.

You have probably seen every animal at the zoo pace back and forth, but it is especially prevalent in tigers, leopards and other big cats. These animals are incredibly active, but zoo environments are small and incredibly boring. It is estimated that lions in zoos spend 48 percent of their time pacing. A serious sign of distress.

When we put zoo animals next to animals in factory farms, the consequences of captivity become incredibly clear. We are able to distance ourselves from the reality of the cruel way we treat animals when we think of them as commodities, or justify their use because it adds value to our own lives in some way … but we can’t deny that there really is no reason why we need to do these things.

Using animals for food and keeping animals in zoos are choices that we have made. Neither are critical to our own existence. Once we come to terms with this reality, we can start to reshape how we think about animals and change the way we treat them for the better.

No animal deserves to spend their life suffering the ways these animals in captivity do.