How Palm Oil Production Has Changed Life for the Orangutan

Palm oil is a vegetable oil that can be found in around 50 percent of all consumer goods. This singular oil may appear to be an unassuming additive, but when you look down the supply chain to the regions of the world where palm oil is grown, this oil becomes rather devious. Palm oil production is one of the leading causes of deforestation in the Indonesian islands of Borneo and Sumatra. In Sumatra, approximately 10.8 million hectares of tropical forest have been cleared to make way for palm plantations, and the circumstances in Borneo are no better.

The process most favored by the palm oil industry for clearing space for palm plantations is the slash and burn technique. A rather self-explanatory process, palm producers hack away at the existing fauna present in the rainforest, then set what is left on fire to create a flat, unadulterated plain. This process destroys any living being, plant or animal, in sight. Palm oil is a highly profitable crop, meaning many companies are willing to turn a blind eye to the damage that is caused in its production.

Sadly, however, there are many casualties of the palm industry as the result of this vicious practice, one of the most prominent being the orangutan.

The Stark Reality for the World’s Orangutans

The orangutan could once be found across the rainforests of the Southeast Asia, but in modern times, Borneo and Sumatra have become the only native habitat for the species. But, as palm oil production advances through the rainforests of these islands, the orangutan is running out of time. In the past two decades alone, nearly 20,000 orangutans have lost their lives at the hands of the palm oil industry. With population totals teetering around the 60,000 range, if their rate of decline continues as such, the orangutan only has about 30 more years before they could become extinct.

This is what living in competition with palm oil production is like for the orangutan.

Life for the Average Orangutan

Orangutans are the world’s largest aboreal (lives in trees) animals. They spend around 60 percent of their days foraging for food, which is largely found in the rainforest canopy, making the tree tops a natural home for these mammals. Infant orangutans learn to forage for food and nest from their mothers. 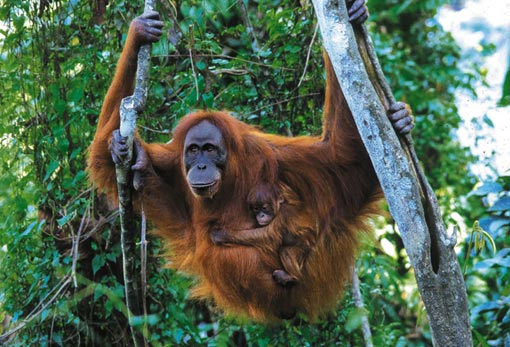 For the first two years of an infant orangutan’s life, they are completely dependent on their mother for food and transportation. It is not uncommon for an infant to be carried by their mother until the age of five, and some even stay by their mother’s side until they are eight. Most orangutans become fully independent around the age of 15 or 16, but always return home to visit their mothers when they get the chance. The average lifespan for an orangutan in the wild is between 30 and 40 years. Females typically live the area where they were raised for the bulk of their lives, but males have been noted to travel up to two miles a day. 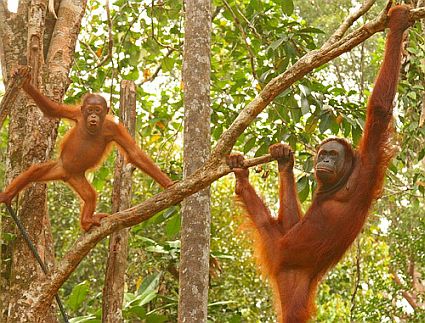 Orangutans are incredibly intelligent primates, who share 97 percent of the same DNA as humans. They have been known to make tools, some groupings of orangutans even make the same kinds of tools in a sort of “cultural tradition.” These incredible, unique cultural traits have been exhibited in varying populations of orangutans, illustrating the ability of these animals to learn and pass down knowledge between generations. 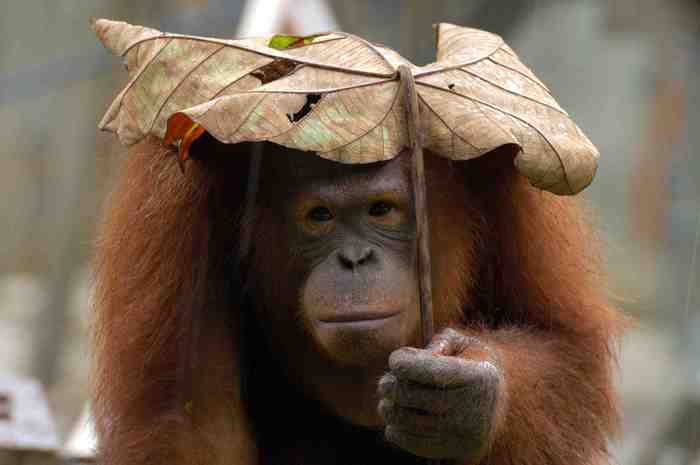 How Palm Oil Alters the Life of the Orangutan

As you can see from the natural behaviors of the orangutan species, they are a group of animal that is largely dependent on the homes and lives they have built for themselves in the trees. They are highly dependent on one another, and exist in a tight-knit, carefully learned organization. 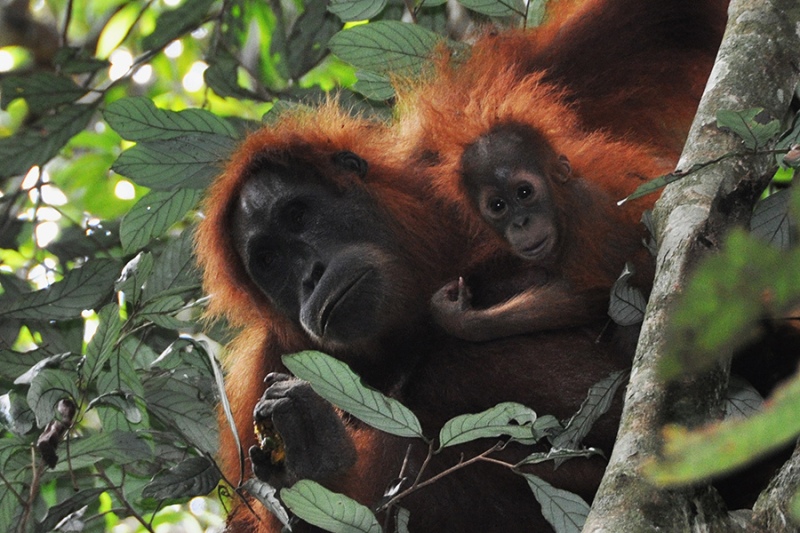 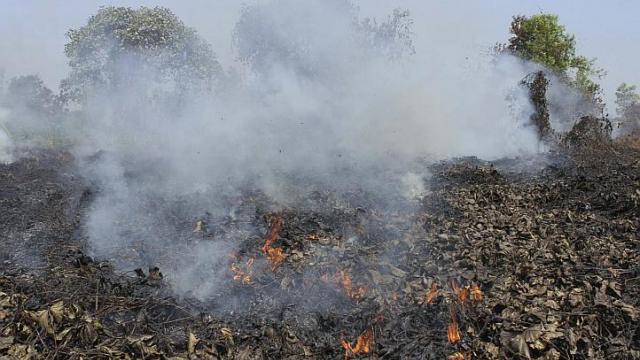 When the tree tops that the orangutan calls home are cut down and destroyed, a few things can happen to the orangutan. Orangutans are considered pests to palm oil producers. When palm plantations intersect with the forest, orangutans can find themselves in the middle of a palm field when out foraging for the day. Unfortunately, palm farmers will resort to clubbing or shooting orangutans if they find them in their fields. Palm workers will also kill orangutans who manage to survive the slash and burn process. In 2006, a reported 1,500 orangutans were clubbed to death by by palm workers. In the past decade alone, 20,000 orangutans have died at the hands of the palm oil industry. 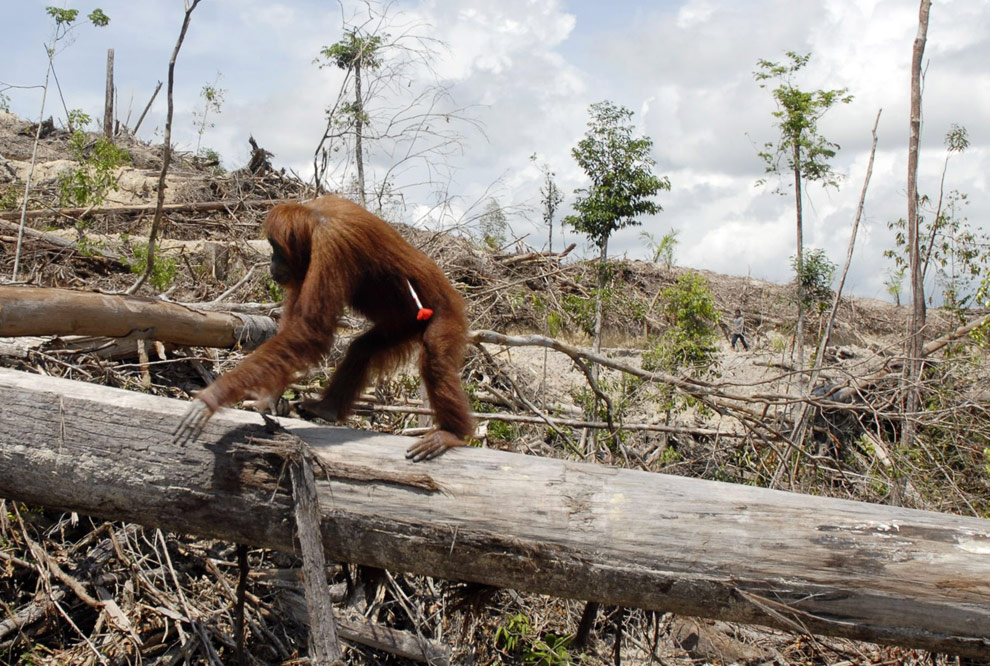 As the orangutan’s natural habitat disappears, these animals are forced into closer contact with humans, which usually ends poorly for the orangutan. Historically, orangutans that have been discovered by palm producers, adjacent villagers or poachers and survived, wind up being sold into the illegal pet trade or the entertainment industry. According to Borneo Orangutan Survival Australia, around 1,000 orangutans are smuggled into Indonesia or transported overseas.  Sold into zoos, circuses, or even to be used for movies and television. 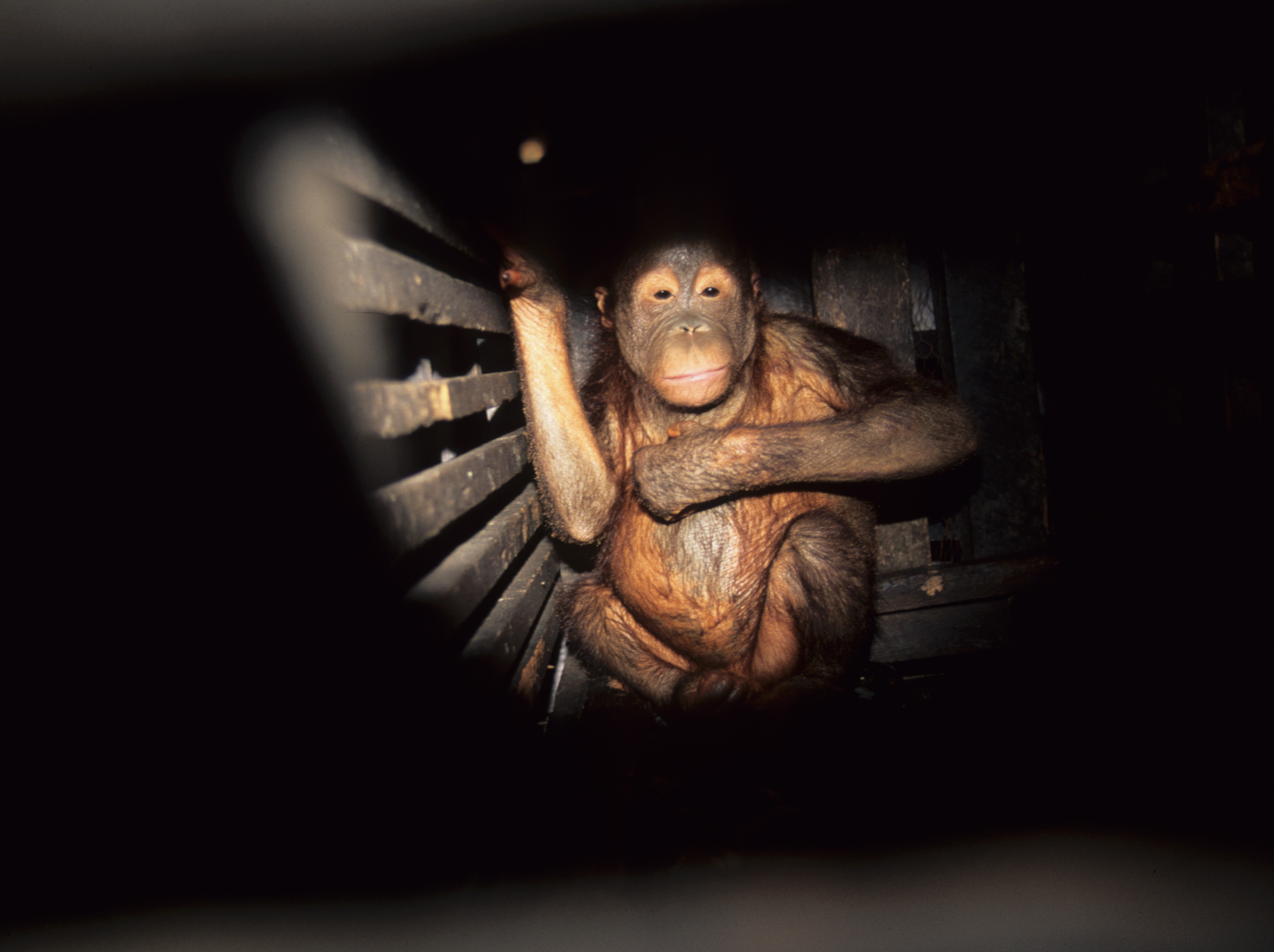 While there are many organizations working to protect the orangutan species, the majority of orangutans in Borneo and Sumatra will not find their way into sanctuaries.

One of the most powerful actions you can take to protect the orangutan is to share information about how palm oil is causing the rapid loss of the orangutans habitat. As consumers we can influence companies that use palm oil to become more accountable for the damage caused in their supply chains. Many companies have made a commitment to source 100 percent deforestation free palm oil for their production, but there are still many more that could do better.

The orangutan can not exist without their native habitat and the more we chop down their environment, the less likely it is that they will survive through the next three decades. Being a mindful consumer who makes the connection between the snack food on their kitchen counter and the animal across the world who has suffered as the result of that same snack’s production, is an incredibly important trait in today’s global society. Check all the products you buy for palm oil, or opt for an alternative like these ones. The cost of losing the orangutan species is not worth any consumer good. So please remember the orangutan in your shopping cart!