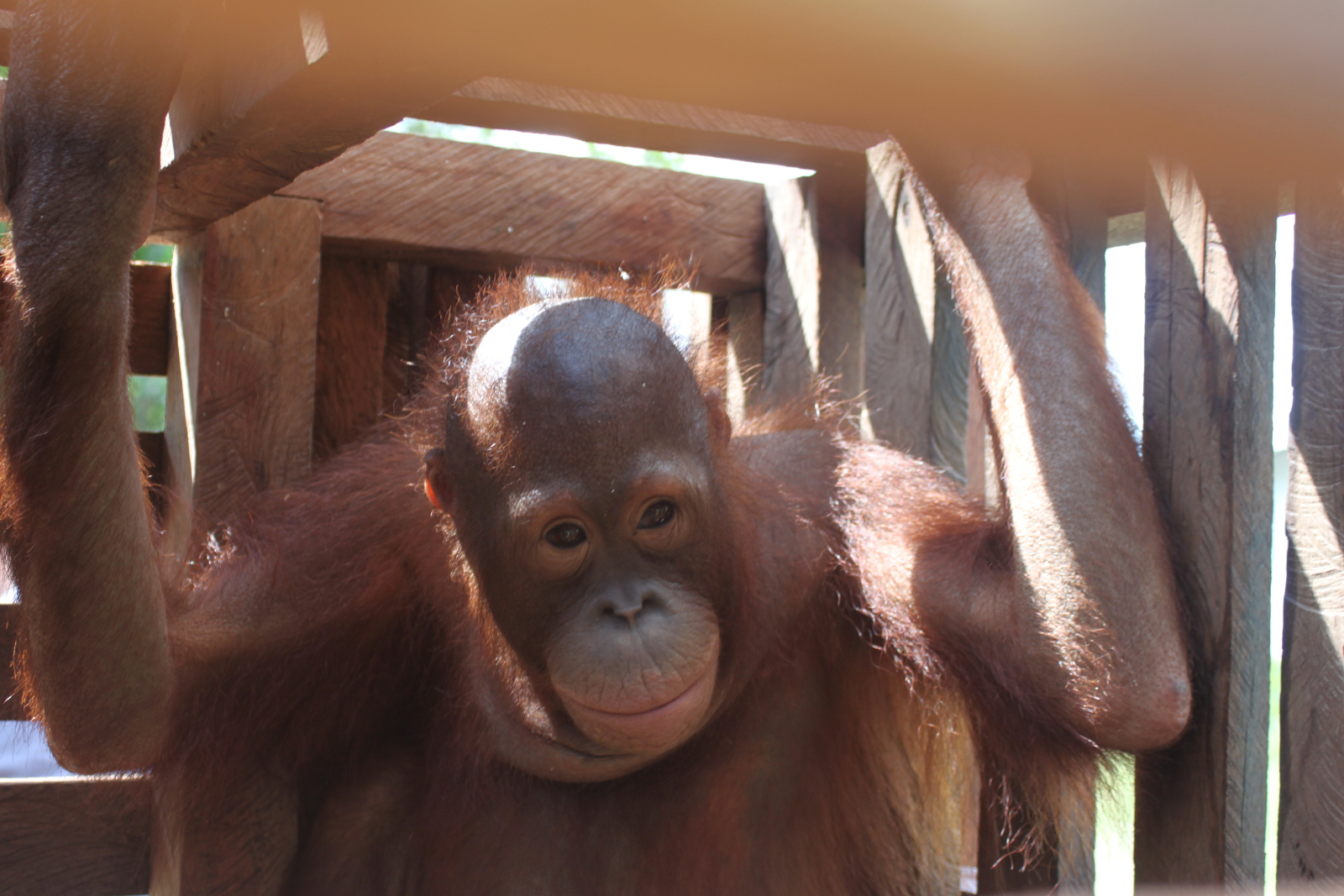 If you have ever looked at the back label of your jar of peanut butter and noticed the ingredient “palm oil,” and wondered what that was, you are not alone. Palm oil can be found in a myriad of consumer goods, from snacks, laundry detergent, and beauty products. For the ubiquity of this particular additive, most people do not even know it exists. Or further, the damage that it is doing to the environment.

Due to the high demand for palm oil, a cheap alternative to trans-fats (yes, that is one of its better selling point) forests across Indonesia are being completely leveled to build palm oil plantations. It is estimated that 300 football fields of forest are cleared every HOUR for palm oil production. Due to the fact that most Americans are unaware that palm oil is being used in their consumer goods, this practice is allowed to continue at a highly unsustainable rate.

The Animal Side of the Story

But, you see, when a forest is cleared, trees are not the only things that are lost, the animals that call these forests home are also lost. The orangutan species is especially effected by the loss of thick, old growth forest, as they call tree tops their home. The process of clearing a forest is not an easy, painless task either–most producers utilize a “slash and burn” technique that not only displaces orangutans but more often than not kills them on sight.

Across Borneo and Sumatra, nearly 80 percent of orangutan habitat has been lost to palm oil production in the past 20 years. At this rate, it is estimated that the orangutan population will be extinct within a span of 25 years. Yikes, is right!

Luckily, International Animal Rescue is helping to ease the plight of orangutans that have been orphaned, displaced, or injured at the hands of the palm oil industry.

Obi and Muria are two such orangutans that have been rescued by International Animal Rescue. Both were rescued from homes in West Borneo where they were being kept illegally.

Obi was discovered chained inside a family’s bathroom where had been kept for 10 months. Although the family was aware that it is illegal to own an orangutan, Lis Key of International Animal Rescue tells OGP, that the family, “thought it would be ‘nice’ to have an orangutan.” 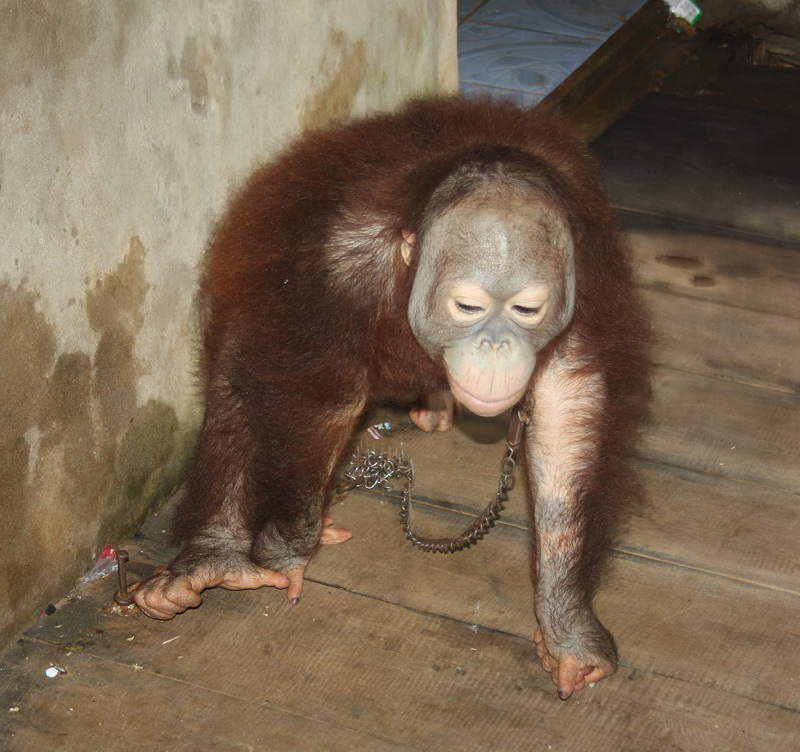 Key explains, “It was claimed by Obi’s captors that he had been found by a farmer in Sungai Padu next to a palm oil plantation,” after which he was taken in as a “pet.” 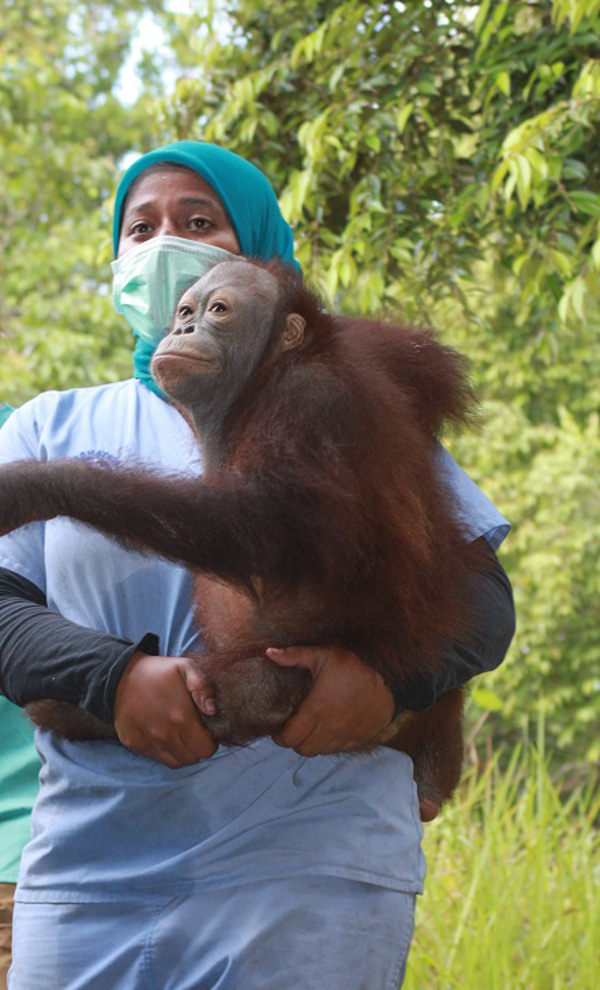 Muria similarly came to live as a pet as the result of the encroachment of humans into the Bornean forest.

Key tells OGP, “Muria had been kept as a pet for three years by a stallholder. Her owner’s stall was at the edge of the forest and Muria reputedly strayed from the forest one day. The stallholder returned her to the forest but she re-appeared within two hours and he took pity on her and took her home.”

Both these young orphaned orangutans were deprived the natural upbringings they would have been able to enjoy if not for the expansion of the palm oil industry. 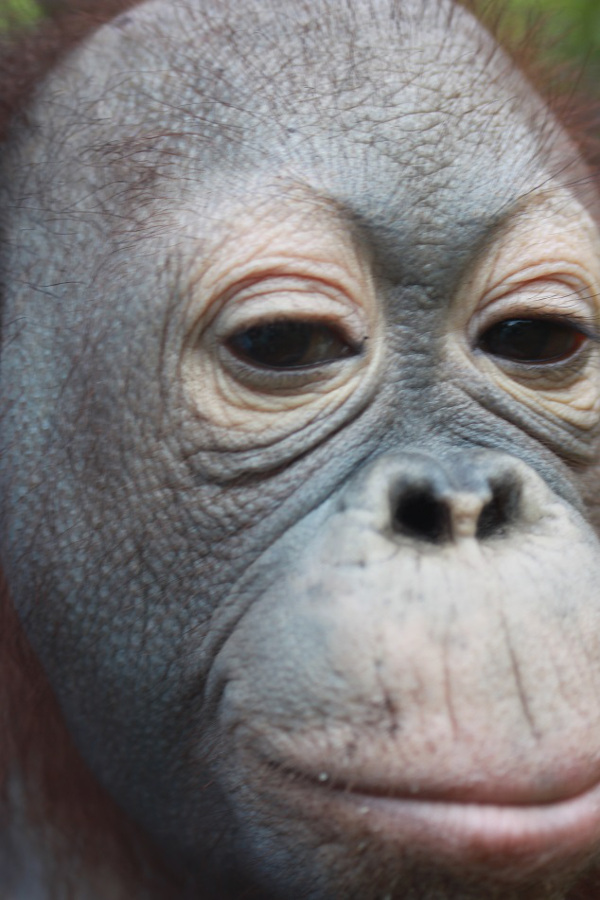 According to Key, “their situation and their rescue has everything to do with deforestation for palm oil plantations…Destruction of the orangutans’ habitat leaves them without food and shelter and pushes them into increasing conflict with local people when they stray onto farmland or close to villages,” she continues, “Adult orangutans are often killed – and even eaten – while their babies are taken and kept or sold as pets. If deforestation didn’t happen, the orangutans would have everything they need within the forest to survive and they wouldn’t have to stray onto agricultural land in search of food.”

But the sad reality it that the global demand for palm oil has made this sort of natural life impossible, and it is unlikely that–even with the increase of sustainable palm initiatives–the damage that is wrought on the orangutan’s natural habitat will be undone in our lifetime. However, this does not mean that all hope is lost for little Obi and Muria.

A Future to Grow Into

International Animal Rescue is caring for Obi and Muria in Orangutan Rescue and Conservation Centre.

Key explains, “They have been introduced to a diet suitable for orangutans and undergone a number of checks and tests to establish that they are free from diseases before they are moved out of quarantine and introduced to other orangutans at the centre.”

But aside from this, the pair are in good health and spirits. Having grown-up around humans, Obi and Muria are calm and even “placid” around their human caretakers. For these orangutans to be able to one day be released back into the wild it is imperative that they learn to be self-sufficient and not rely on humans for care. 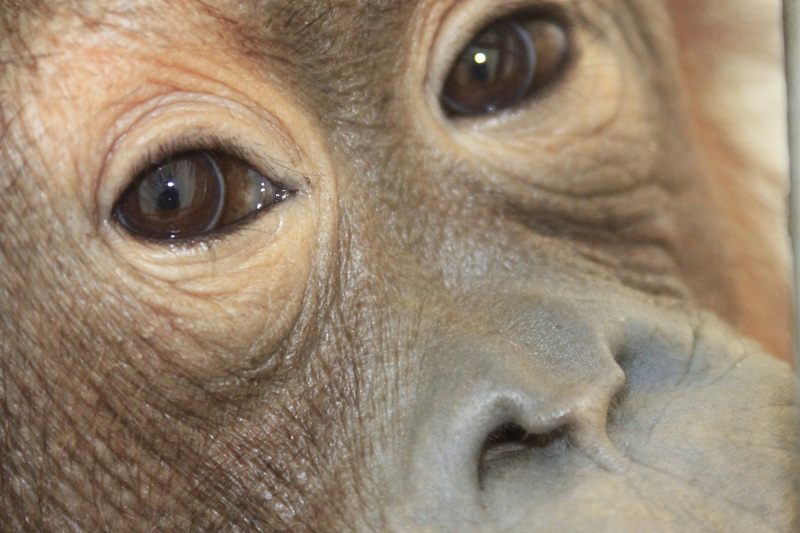 This process is being started with a series of “enrichment” activities that include making nests with branches and learning to climb up trees. Having spent so much time on the ground within their owner’s houses, these little orangutans are “adept” at climbing, a skill all orangutans should be expert in!

Key tells OGP it may take years to rehabilitate Obi and Muria before they can be returned to the wild, which is the ultimate goal for all the orangutans that enter the facility, “Obi and Muria who have lost the strength and the skills to climb and fend for themselves in the wild.” 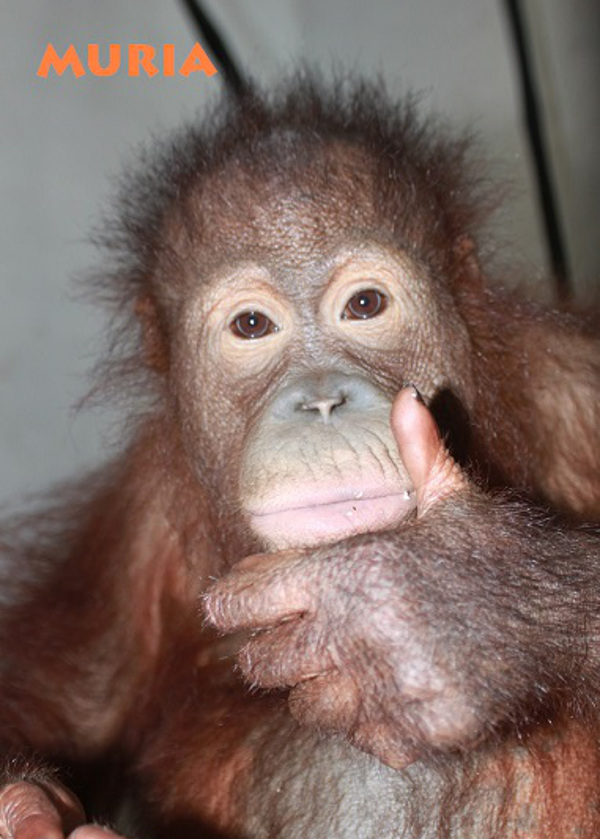 So to learn these important skills, “Both orangutans will go to Forest School to learn from the other orangutans how to behave in the wild – how to build nests to sleep in at night and how to find food in the trees during the day,” Key explains, “It will require time and patience to help the orangutans on their journey back to freedom but it is vital that they are fully prepared for the challenges that they will face if they are to survive back in the forest.”

But Key and the International Animal Rescue team are willing to take all the time it takes to help rehabilitate these two orangutans.

How YOU Can Help

Muria and Obi would have never had to have been rescued by International Animal Rescue if not for the massive deforestation caused by palm oil production. While the struggles of the Bornean orangutan may seem far out of your reach, you may be surprised to know that a solution can be found at the tip of your fingers.

By selecting products that do not contain palm oil, you are doing your part to ensure that your consumption habits are not fueling mass deforestation in Indonesia and causing orangutans like Obi and Muria to become orphaned and shuffled into the illegal wildlife trade, or worse. For more information on alternatives to palm oil, check out this article.

To help the animals that have already fallen prey to deforestation, support the work of International Animal Rescue. For information on how you can donate to help them save many more animals, click here.