Are You Eating Dirty Oil? The Environmental Impacts of the Palm Oil Industry 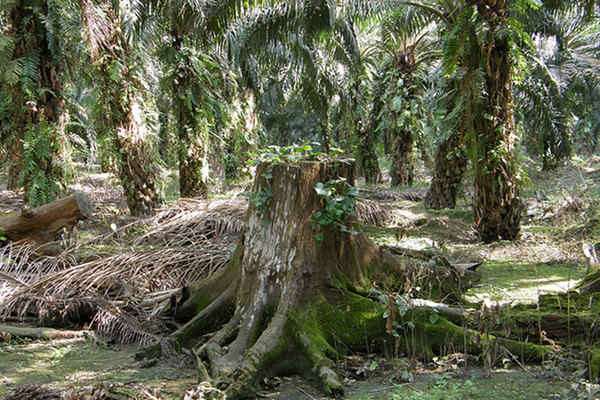 Borneo is the third largest island in the world, and forty years ago it was covered with dense rainforest. As you read this, loggers in the Borneo rainforest are chopping down the trees, acre by acre. They will burn the wood, which will release huge quantities of greenhouse gases into the atmosphere. Then they will plant a palm oil plantation, use the fruit and kernels to make oil, and sell it to massive corporations who will use it in every commercial product imaginable, from washing powder, to chocolate, to soap. It sounds like a straightforward commercial enterprise. So what’s so ‘dirty’ about palm oil?

The deforestation of the Borneo rainforest involves draining its natural peat swamp forests which store huge amounts of carbon that are released into the atmosphere when they are dug up. According to Greenpeace’s in-depth report on the palm oil industry in Borneo, titled Cooking the Climate, the incineration of South East Asia’s peat forests has released 1.8bn tonnes of greenhouse gases into the atmosphere. In statistical terms these gases count for 4% of climate-change emissions globally, from only 0.1% of Earth’s land. Most of the cleared land was used to grow palm oil plantations.

In addition to this, the mass clearing of trees for farmland disturbs the ecosystem of the rainforest by decimating rare and exotic flora and fauna. With the planting of a single crop plantation, the natural biodiversity of the rainforest is lost. The mono-crop culture that has long-plagued environmentalists in the west displaces or destroys most of the species in a single sitting, as they are unable to adapt to living within vast acres of a single crop. The environment, habitats and species that are destroyed have lived together since the dawn of the rainforest, and the damage caused by palm oil farming is irreversible. In the words of WWF employee Junaida Payne, transporting this type of agriculture to the rainforest creates ‘biological deserts’.

According to a report by the United Nations Environment Programme (UNEP), the deforestation that has already taken place in Indonesia for palm oil, and the illegal logging that is still occurring there now, indicate that most of the country’s rainforest will have been destroyed entirely by the year 2022.

A more widely-discussed topic in relation to the ills of the palm oil industry is the loss of endangered species. The orangutan, Asian elephant, Sumatran rhino, and Sumatran tiger are all species whose survival hangs by a thread, to name a few examples. The orangutan’s natural habitat is within the trees of the rainforests of Borneo and Sumatra, and without these they cannot survive. Serge Wich of the US Great Ape Trust states that: ‘Unless extraordinary efforts are made soon, it could become the first great-ape species to go extinct.’

The mass deforestation that goes hand-in-hand with the palm oil industry also displaces native peoples. They lose the land they have always lived on as well as a precious symbiotic relationship with the rainforest environment. Indigenous groups are evicted from the land to make way for palm oil plantations, and they are powerless to fight back, particularly since much of the logging that takes place is illegal.

In 2010, Unilever was named as the world’s biggest buyer of palm oil, counting for 3% of total world palm oil production. Other large investors in this environmentally destructive industry are food companies Kraft and General Mills, HSBC bank, agribusiness giant Cargill, and food manufacturer Nestle. Corporations that have been leading palm oil expansion into Indonesia’s peatlands include Gillette, Burger King and McCain.

Other popular brands are also huge investors in the palm oil industry. If you buy products such as Kellogg’s cereals, Hovis bread, Cadbury’s chocolate bars, Flora margarine, Persil washing powder, or anything from Premier Foods, you are likely contributing to the devastation of the rainforests and all its inhabitants, because in many products palm oil is an unlisted ingredient. It can simply be listed as ‘vegetable oil’. Australian citizens have been putting pressure on their government to make it a law for manufacturers to clearly list palm oil as an ingredient in their products. Although the amounts found in individual products are small, they add up to large swaths of rainforest destruction and habitat and species depletion in the Borneo rainforest.

Until recently, palm oil was being added to fuel, as per the EU Biofuels Directive initiative, however due to warnings from several major environmental bodies, a moratorium has been placed on this directive. The impact of this dirty industry is clear.

Spread the word. Share this article. Tell your friends. Bring it up in conversation with family members. Despite much media attention being given to the subject of palm oil, many consumers are still unaware of the profound destruction that is being caused by this industry to our planet. If things don’t change soon, Borneo will have no rainforest left.

Boycott all palm oil products. Ditch the dirty companies. Consumer power counts for everything when it comes to palm oil. You can use this list to ascertain which products to support instead (note: not all the products on this list are vegan-friendly).

Put pressure on manufacturers to source sustainable palm oil or to not use it at all. Write to companies, start local campaigns, organize direct actions. Sign the petitions that are already available online- go here and here, for a start.

If you are a manufacturer, source your palm oil sustainably, or not at all. Local companies are more likely to adapt to these demands if asked to do so by the customers, or if they already have an ethical manifesto. The British cosmetics company Lush has stopped using palm oil altogether, opting to use coconut oil in its products instead.

Put pressure on the government to pass a law stating that products containing palm oil must be clearly labeled. Write to your local MP/governor to see what he or she is doing about the unclear labeling. Start a petition. Gather support. Make a noise about it.

Support rehabilitation projects in Borneo such as the Borneo Orangutan Survival (BOS) Foundation. One of their reforestation projects transformed a 2,000 hectare wasteland into a thriving forest within just a few years. Give them your spare change, start a collection for them, or stage an event to fundraise for them and spread awareness of their cause.

The list goes on. There is a huge amount of work to be done to rectify the decades of environmental impact that the palm oil industry has had on the rainforests of our world. The points listed above are just a start. Other demands that must be made include protecting the peat swamp forests that remain, supporting the displaced indigenous peoples and animals back into their natural environments, and ending the corruption that allows this environmental atrocity, which includes mass illegal logging, to take place in the Borneo rainforest. What will you do?