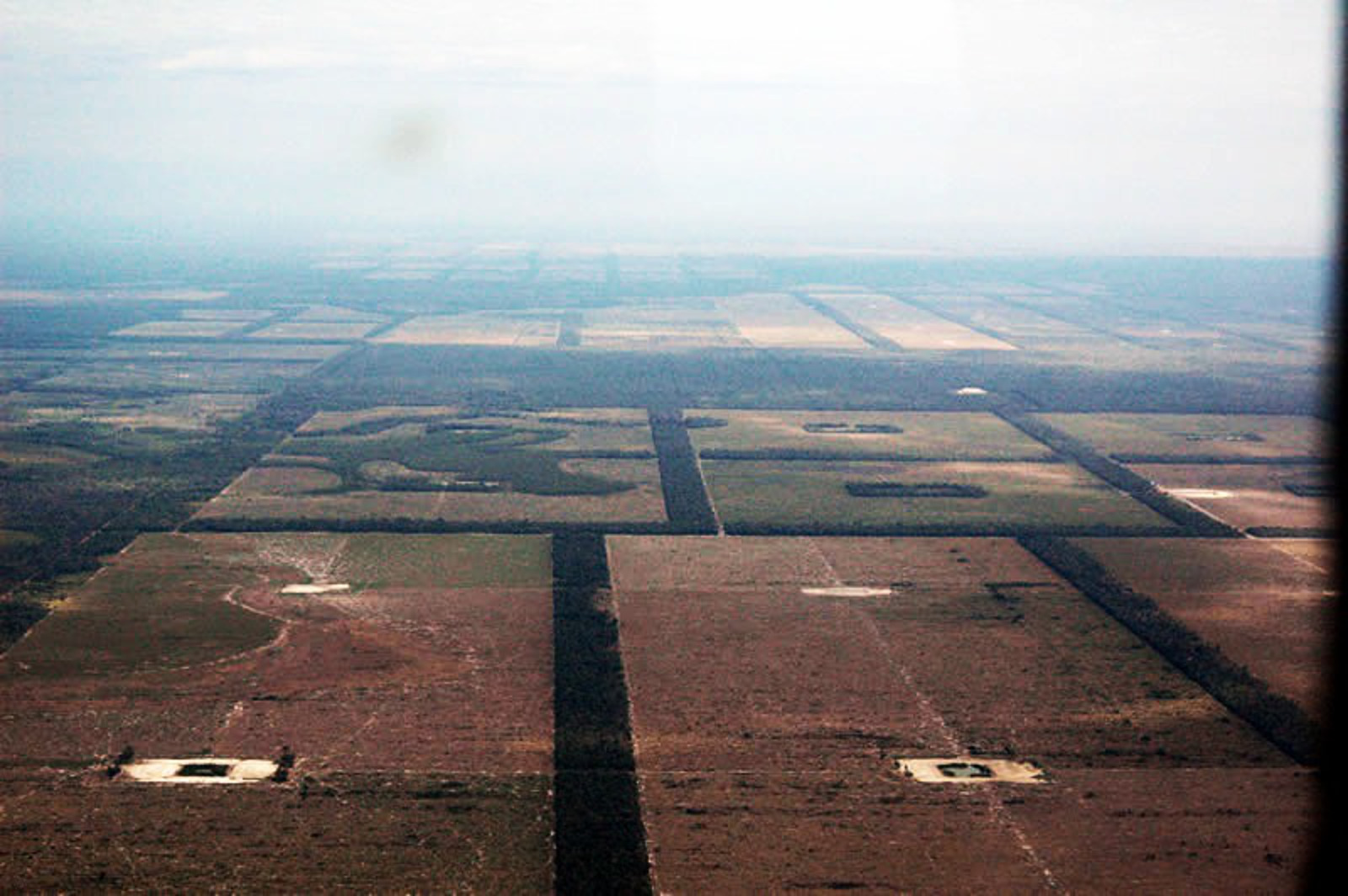 Cargill is the largest privately held company in the world. Grossing an annual earning of $1.8 billion dollars with a presence in 67 different countries, it is not far off to say that Cargill is one of the most powerful corporations on the planet. And funny enough, you have  probably never even heard of Cargill.

If you have ever gone shopping in an American supermarket or visited a fast food restaurant, chances are you have purchased or consumed food containing ingredients sourced by Cargill. You see, Cargill is not known by its personal brand, but makes an appearance in thousands of brands you do know across the world. Without a doubt, Cargill dominates the American food system. Some would even argue it virtually controls it via their business in trading, purchasing and distributing grain, and other agricultural commodities, such as palm oil and soy. Cargill also supplies some of the top food producers with ingredients such as glucose syrup, vegetable oils, and fats that are used in processed food. In addition, Cargill supplies about 22 percent of the U.S. domestic meat market. 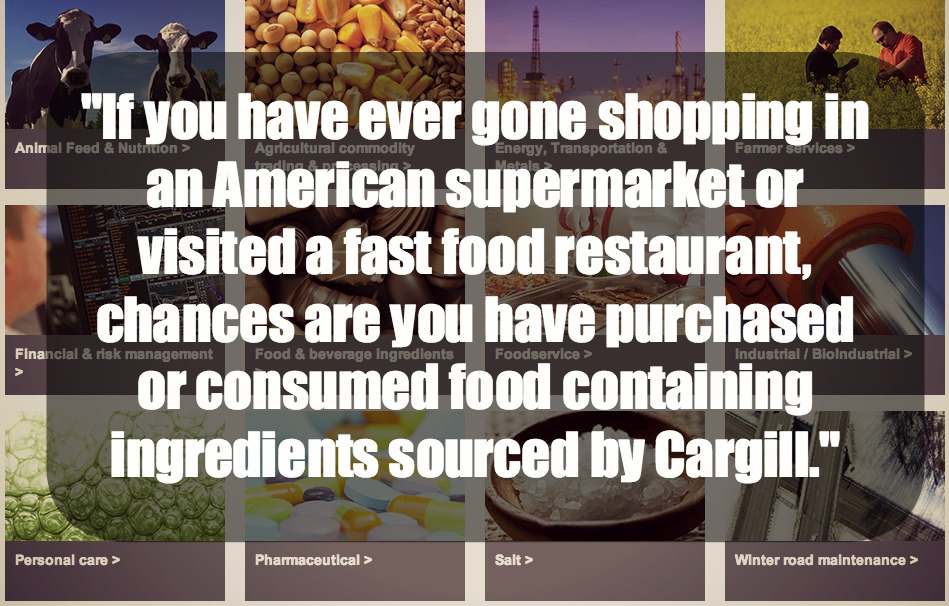 And with great power, comes the expectation of great social corporate responsibility. Cargill has been the subject of numerous environmental and animal welfare campaigns run by Rainforest Action Network, The Humane Society of the United States, and many others. Two of the largest commodities sourced by Cargill are palm oil and soy, both of which carry a less than stellar reputation in the world of environmental and animal rights.

Cargill is the largest importer of palm oil in the United States, and this title does not come without consequences. Palm oil is responsible for more deforestation, environmental degradation, and species loss than most people realize. Showing up in a variety of consumer goods, palm oil is cheap, versatile, and incredibly lucrative.  To give you an idea of how huge palm oil is: consider that this particular oil accounts for one-third of vegetable oil consumed world wide, equaling out to a steep 50 million metric tons per year.

Palm oil is produced primarily in Indonesia, Malaysia, and Papau New Guinea. Nearly 85 percent of palm is grown across these regions and as a result, 8.7 million acres of forest has been converted into palm oil plantations. And this flagrant destruction is not going unnoticed.

As more attention is brought to the role of palm oil plantations in the disappearance of rainforest and congruently species such as the Sumatran and Bornean orangutan, consumers are beginning to demand action from Cargill to improve standards within their supply chains. Recently, Cargill answered this demand, announcing that they would no longer purchase palm oil from sources associated with deforestation, peat land conversion, or social conflict.

Seeing the incredible damage that palm oil plantations have wrought on the planet, this is a groundbreaking step in the right direction. Every effort to improve a bad practice should be rewarded and we do commend Cargill for making this landmark decision. However, it may appear that the publicity raised by this improved policy is overshadowing a more serious issue that Cargill is not yet willing to address.

The Gran Chaco region of South America, covers an area of over 210 million acres, extending across Argentina, Paraguay, and Bolivia. Second only to the Amazon in biodiversity, the Gran Chaco is a composed of low forests and savannas, a dry forest as opposed to the Amazonian rainforest. Endangered species such as the jaguar, tapir, and giant armadillo, call Gran Chaco home, although as their native habitat disappears their survival becomes evermore precarious.

Unsurprisingly, human industry is a driving force behind deforestation and habitat degradation in this little known area. Where palm oil is the number one culprit in Indonesia, soy is largely behind the rapid degradation of the Gran Chaco.

According to John Burton, the chief executive of World Land Trust, “Nearly a million acres of Chaco forest” was cleared in 2013, and further, in a single month, “three acres of forest were cut down every minute.”

Literally watching the forest of Gran Chaco disappear by the minute, there is no denying that the deforestation crises in this region. In fact, Gran Chaco has the world’s highest deforestation rate. 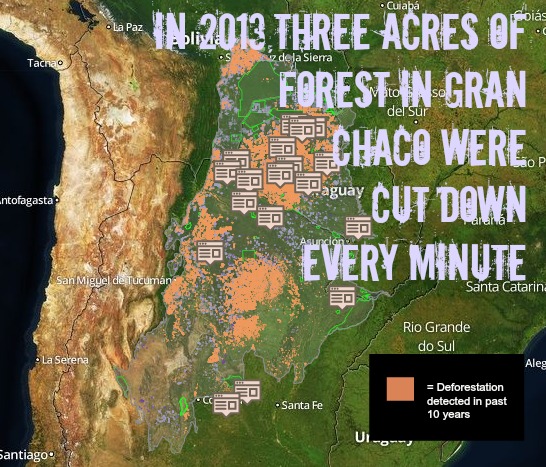 Why Is Cargill Growing so Much Soy?

Like palm oil, soy is an incredibly versatile crop that is produced in enormous quantities to meet a variety of needs. Like palm oil, soy can be found in consumer goods from peanut butter, to chocolate; however, the majority of soy is grown for animal feed. American livestock consume over 30 million tons of soybean meal every year. It is important to note the high-stakes Cargill has in the beef industry.

In Paraguay, soy plantations cover about 80 percent of cultivated land. Although other corporations such as Bunge and ADM also export soy from Paraguay, Cargill exports the most by far. In 2008, it is estimated that Cargill exported 1,268 billion dollars worth of soy, while ADM totaled 487 million, and Bunge at 261 million.

As you can see soy is a highly lucrative business for Cargill, but this corporate pay out comes at an incredibly high cost to the environment. On a global scale, 283.8 million metric tons of soybeans were produced in the 2013-2014 growing season. As with palm oil, this incredible demand for product has lead the industry giants to resort to “any means possible” tactics when it comes to supply chain. 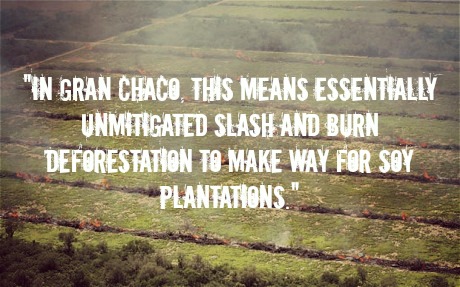 In 2006, Cargill was the target of a campaign from Greenpeace entitled, “Eating Up the Amazon,” that brought attention to the large-scale deforestation that Cargill’s soybean suppliers had caused in the Amazon rainforest. This campaign put Cargill in the spotlight, and consumers took note.

In the article, Green Going Gone. The Tragic Deforestation of the Chaco, journalist Christine MacDonald writes that in response to the spread of Cargill’s ties to deforestation in the Amazon,  the 2010 edition of “Cargill News,” reported, “The global response from consumers and customers … ranged from concern to outrage.”

And as the result, Cargill put a voluntary “Soy Moratorium” in place where they vowed to not purchase soy from sources linked to deforestation, much as they are now doing in Indonesia with palm oil. Cargill also partnered with The Nature Conservancy and set up a third-party review process to ensure their commitment to zero-deforestation soy.

However, although it appears Cargill learned their lesson in the Amazon, their actions in Gran Chaco reveal that their “commitment” to sustainable production only applies when someone’s watching. 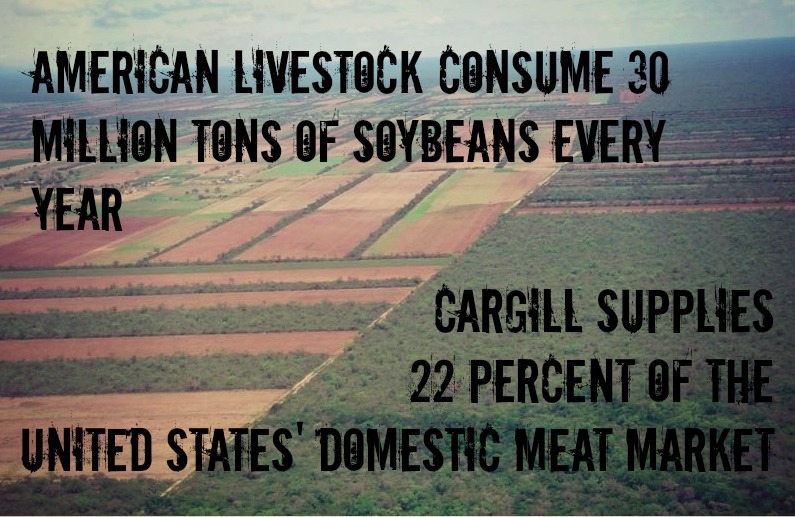 Where Cargill has Failed Gran Chaco

The deforestation in Gran Chaco is undoubtedly fueled by the interests of Cargill and a few other corporations that include soy from this region in their supply chain.  Exporting soy crops is a hefty source of income for Paraguay,  Argentina, and Bolivia.

The downstream consequence of this surplus from soy is that these governments do very little to regulate its production, factoring into the ability of Cargill suppliers to destroy the local habitat at will.

Cargill is incredibly proud of their reputation for taking measures to protect the environment and the people where their supply chains exist, but it is clear that this only holds true when they are put in the spotlight.

As MacDonald writes, “Big Ag concerns like Cargill hold the key to developing the country without further unsustainable environmental degradation.”

Cargill has a veritable blue-print of how to do this in Gran Chaco given the measures they have already instated in the Amazon and those they are rapidly introducing in Indonesia, so their failure to do the same in Gran Chaco is nothing short of unacceptable.

An Opportunity for Change

Cargill is a privately held company, meaning they don’t have shareholders to influence decisions the company makes in regards to environmental standards and policy. In fact, the Cargill family still owns 88 percent of the company.

To Cargill, however, their reputation among consumers is enormously important, and acts in the stead of shareholders to influence their decisions. In the case of palm oil, once consumers were made aware that their snacks and consumer goods contributed to mass deforestation in Indonesia, they raised their concerns and Cargill listened. Given Cargill’s history and willingness to change destructive practices based on consumer response, the ending of the story for Gran Chaco and soy deforestation is not set in stone. If consumers Cargill responsible for their actions in Gran Chaco – just as they have for Cargill’s actions in Indonesia – a real positive change for Chaco is possible.

Being an aware and informed consumer is essential in our globalized world. Seeing the connection between the products we purchase, and the negative environmental impact that even a single ingredient – such as soy – can have, opens up an enormous window for change. It is time we stood up as consumers and held Cargill accountable for their actions in the Gran Chaco.

If history serves this is the most powerful tool we have for regaining control (or even partial control) of our reckless food system.