The Essential Guide to Cooking Mushrooms

Mushrooms hold a place on my way-too-long list of foods I wouldn’t eat as a kid. I absolutely hated mushrooms and would pick them off my plate if any sneaky ones found themselves there. It wasn’t until later in life that I saw the light. I had a Portobello mushroom cheesesteak and it was amazing! It was beefy, meaty, savory and my feelings towards mushrooms changed. Now I love mushrooms. I put them in my gravy, in my scrambles, I make stuffed mushrooms, sautéed mushrooms, all kinds of mushrooms and yes, mushroom cheesesteaks are still a favorite dish of mine.

While white button mushrooms and Portobellos are delicious, there are so many other types of mushrooms, each with their own texture and flavor. They add umami to dishes and are a great replacement for meat. Mushrooms are versatile, healthy and delicious. If you’ve been wanting to cook with mushrooms more, this guide will tell you about the different types of mushrooms and how to use them. 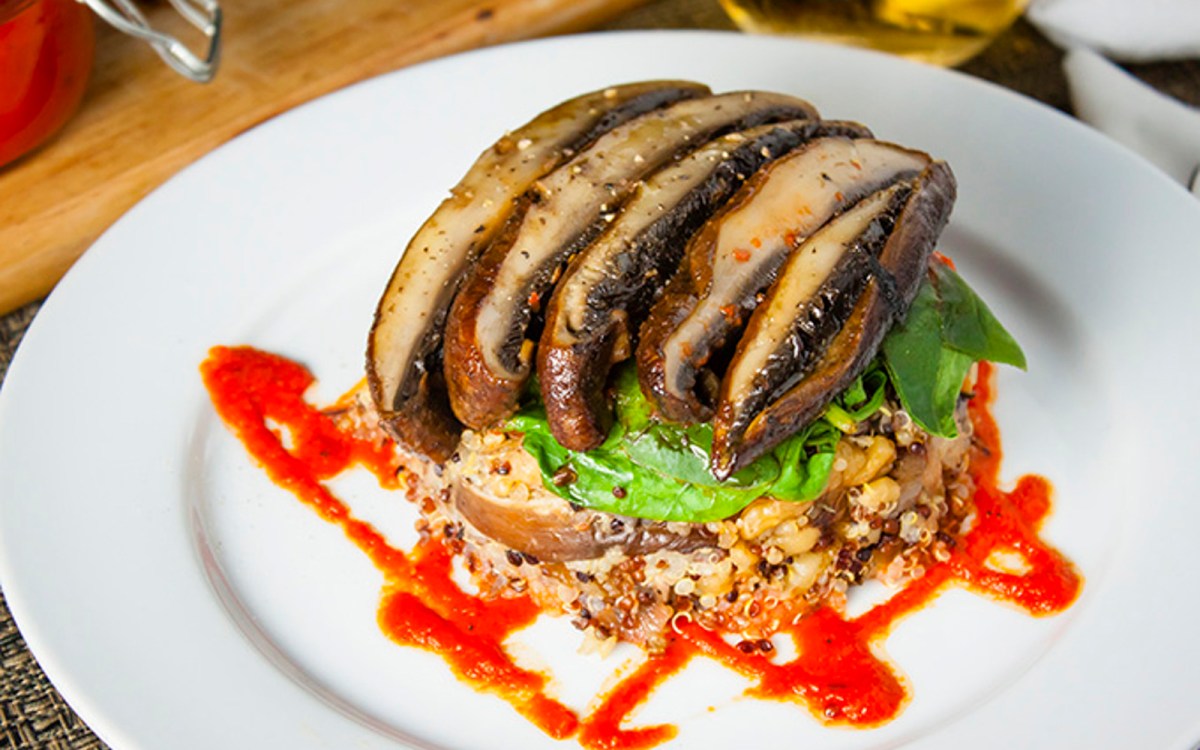 What exactly is a mushroom? Mushrooms are part of the Fungi family though not all fungi are mushrooms. They are a separate Kingdom from plants and animals. We may call mushrooms vegetables but they are not actually plants even though their parts have similar names. They have stems (the body), seeds (spores) and caps which are like the fruit or flower of the fungus. Mushrooms can grow above or below the ground; they do not need sunlight. They get their nutrition from breaking down and “eating” dead plants.

There are about 10,000 described types of mushrooms. Of those, it is estimated that only 25 percent are edible and of those, only four percent actually taste good. Mushrooms provide umami, the fifth basic taste, thanks to certain chemicals like glutamate that occur naturally in food. That savory taste is why mushrooms make great replacements for meat. 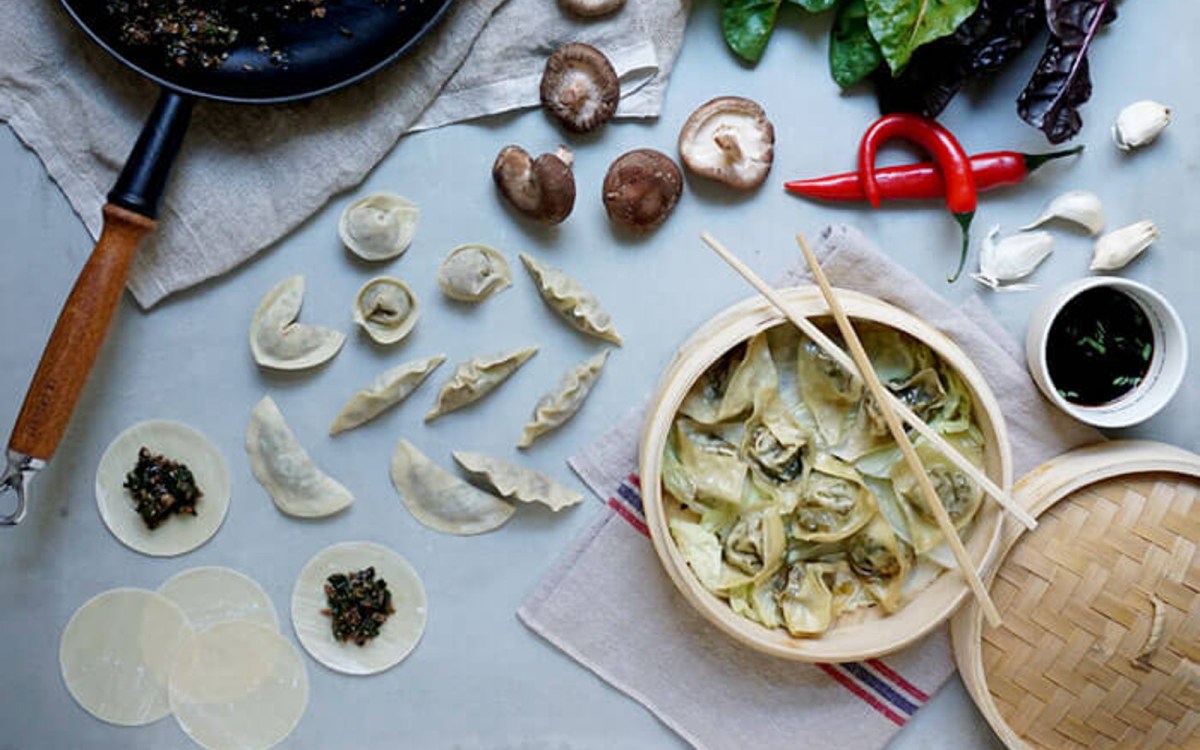 Mushrooms can be purchased loose or packaged. Obviously, it’s easier to select good mushrooms when they are loose and you can see them all. Try to choose mushrooms that are firm with a fresh, smooth appearance. They should not be moist nor should they be dried out. Avoid any mushrooms that are moldy.

Store mushrooms in a paper bag in a cool, dark place or in the fridge for up to a week. Keep them dry and do not freeze them unless they are cooked first. Use your fingers or a damp towel to wipe any dirt off the mushrooms. Avoid running them under water or soaking them as they will absorb the liquid. 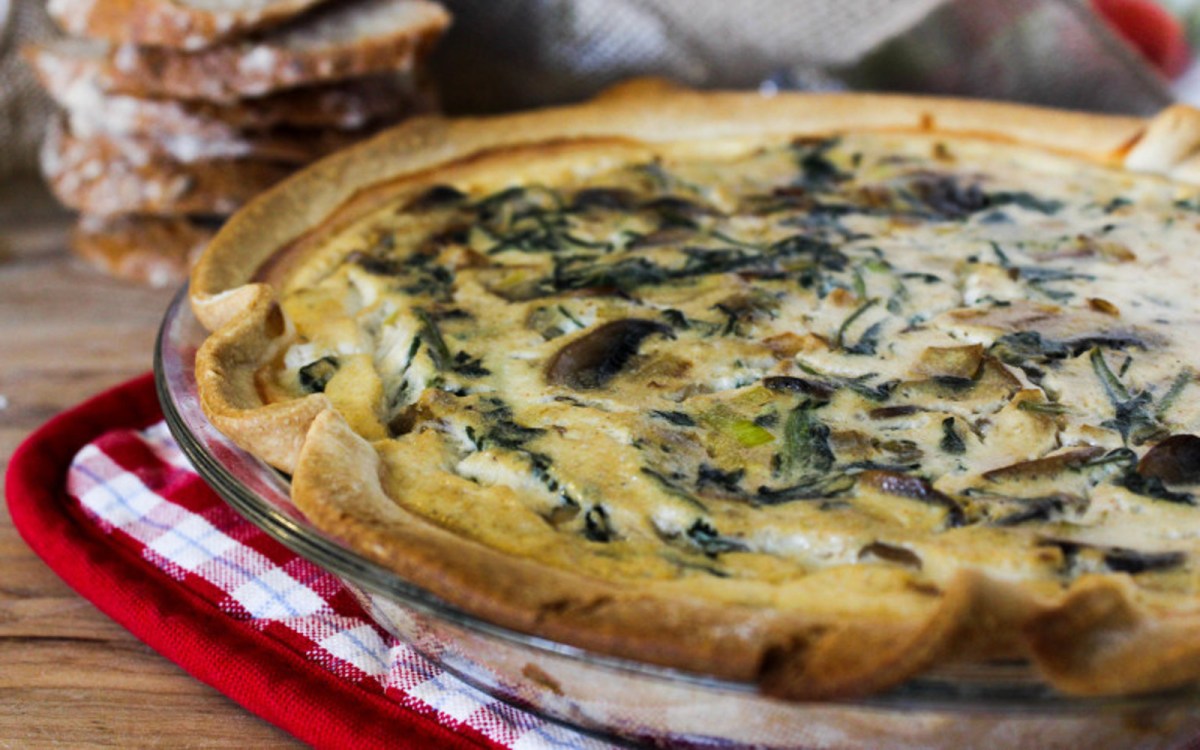 White Button mushrooms are the most common ones. They are also known as Table mushrooms and in France, they are called champignon which makes them sound very fancy. They are mild in flavor, can be eaten raw or cooked and you can eat the entire mushroom including the stems. Don’t count these simple mushrooms out. They’re great in salads, on pizza or in any recipe including gravies and stir-fries. Just be sure to season them well to amp up the flavor. Mushrooms love herbs, especially thyme and oregano.

Try these in this Button Mushroom and Leek Quiche, Zucchini Mushroom Veggie Burgers, and Pan Fried Tofu tossed with Ginger Spinach and Mushrooms. 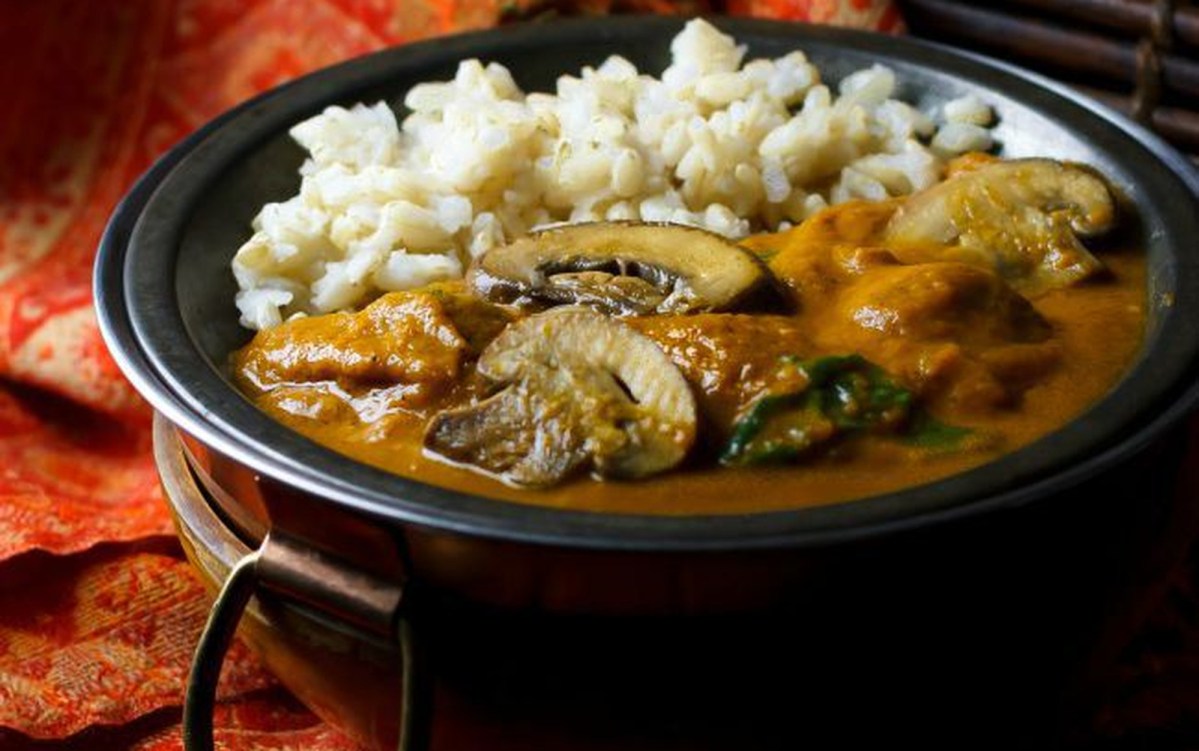 Cremini mushrooms look like white buttons except they are light brown in color. They are also known as brown mushrooms, Roman, classic brown, golden Italian and baby bellas since cremini mushrooms are young Portobellos. One mushroom is called a cremino. Cremini are more flavorful than white mushrooms with an earthy flavor. They usually cost a little more than white mushrooms but it’s worth it. You can eat the entire mushroom, including the stem. They are delicious sautéed until brown with olive oil, garlic and a bit of tamari, balsamic vinegar or vegan Worcestershire sauce. 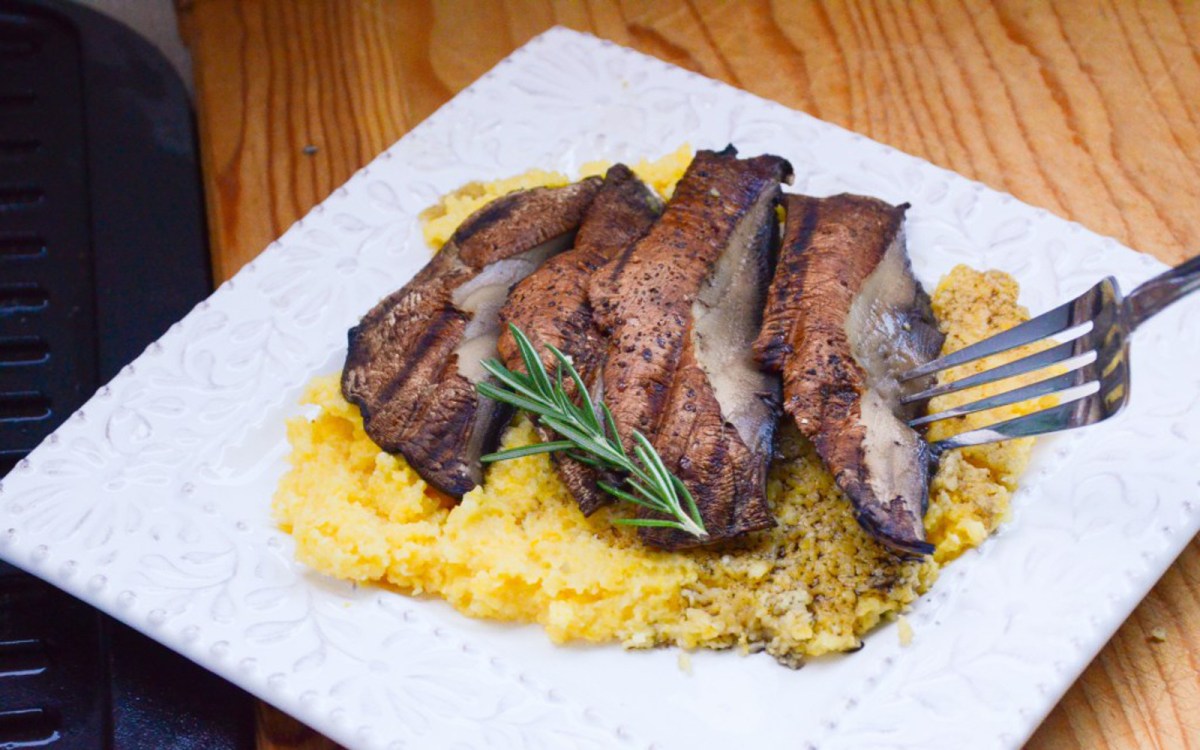 Portobello mushrooms are probably the most recognizable, especially to plant-based eaters. This mushroom is the most mature stage of the white button mushroom. Also called Portabella, field mushrooms, and open-cap mushrooms, these mushrooms are big, rich and meaty-tasting. They are probably used most often to substitute for meat in burgers and other dishes. When sliced, they have a taste and texture pretty close to steak. The large caps are perfect for grilling and can stand up to a marinade. The stems and gills are edible though some people remove the gills to make the mushrooms more attractive, to make room for stuffing or to avoid blackening a dish. Use these for burgers (or as the buns), mushroom-centric dishes like stroganoff and of course, for meatless cheesesteaks! 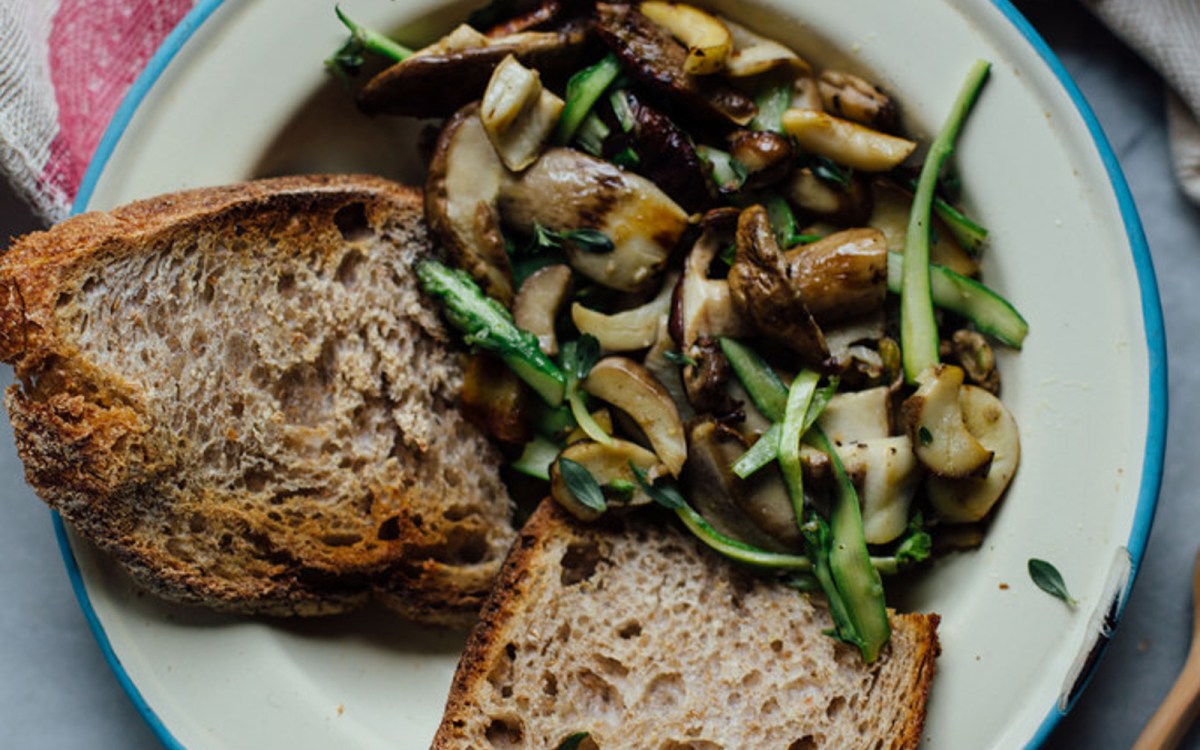 Porcini mushrooms are one of the most popular types of wild mushrooms. They are also called Cèpes, boletes, and Polish mushrooms. Porcini (the singular is porcino) are reddish-brown and have a smooth, creamy texture and aromatic, woodsy flavor. They are popular in Italian and French cooking. They are most often sold in dried form and are reconstituted by soaking in hot water. A little bit adds a lot of flavor. Porcini are perfect in pasta sauces, risotto, soups and other dishes. The water they are reconstituted in can also be used to add mushroom-y flavor to dishes.

Use porcini mushrooms to make this Buttery Porcini Mushrooms and Asparagus on Toast, Cabbage Rolls, and these Potatoes and Porcini Mushroom Ravioli in Broccoli Cream Sauce. 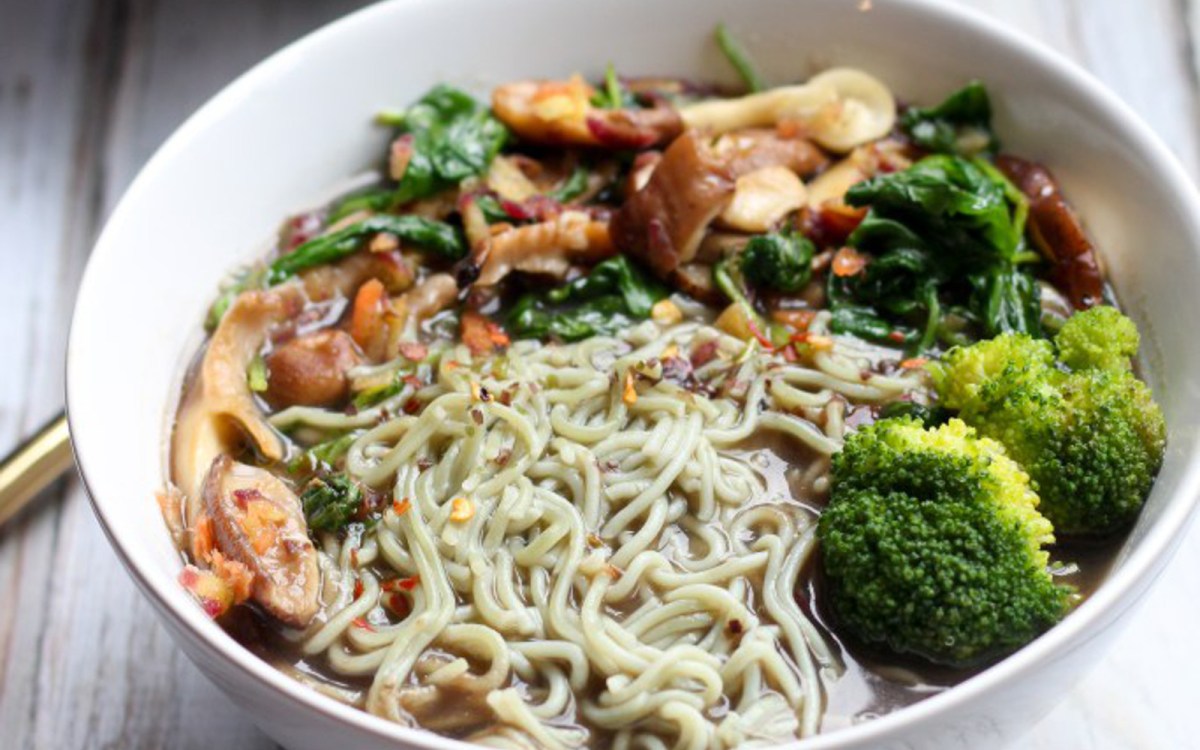 Shiitake mushrooms grow wild in Japan. The name is Japanese for “oak fungus.” They are also known as black forest, black winter, brown oak, Chinese black, and black mushrooms. They have distinctive brownish-black caps which curl under a bit. Their flavor and aroma are a bit smoky, woodsy and savory-rich while the dried shiitakes are even more intense. The stems are too tough to eat but they can be used to flavor soups and sauces. Shiitakes are great for stir-fries, tacos, and pilafs.

Oyster mushrooms are named that because they are white and fan-shaped like oysters. They are also called tree oyster, angel’s wings, pleurotte en huître, shimeji and abalone mushrooms. Delicate and lacy, these mushrooms have very little stem and a mild flavor and aroma. Oyster mushrooms get very tender and moist when cooked but can be eaten raw as well. They are very common in Asian cuisine. Use these when you really want the mushrooms to stand out and be seen. 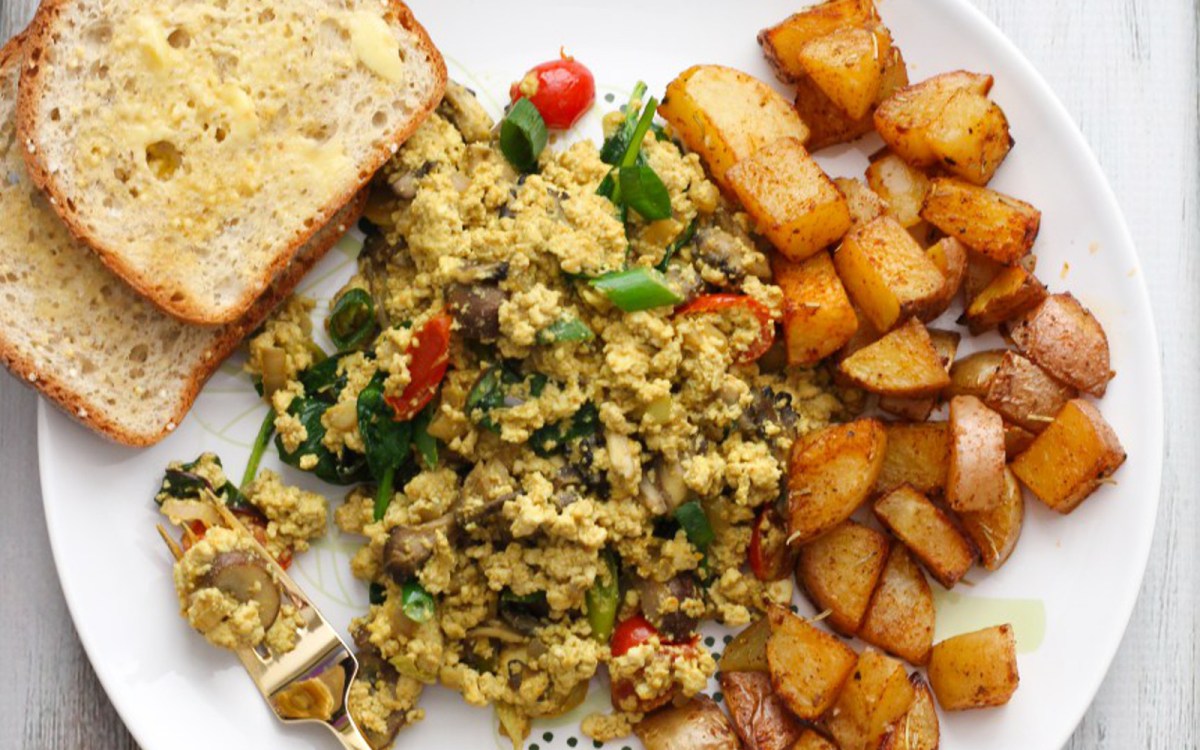 Maitake mushrooms are also known as Hen-of-the-Woods, ram’s head or sheep’s head mushrooms. Maitake actually means “dancing mushrooms.” They grow at the base of trees and look like little cabbages. They are often sold in clusters like a little bouquet of feathery caps. Maitakes have an earthy flavor and aroma. Maitake mushrooms are the subject of a lot of research as they are believed to be extremely healthy for our immune systems. Use them in soups and stir-fries and anywhere you want serious mushroom flavor. 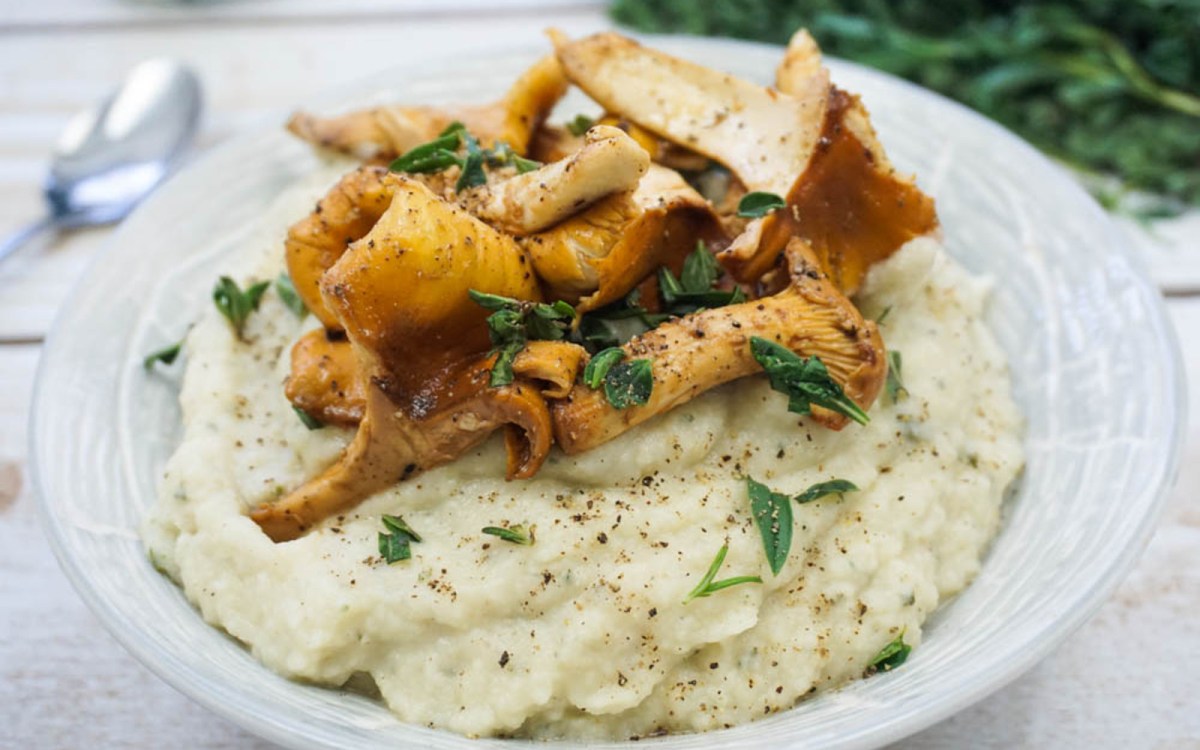 Chanterelle mushrooms look like trumpets. They are also called golden chanterelle, egg mushrooms, and girolles. Chanterelles are fleshy and firm and smell a bit like peppery apricots. They are commonly used in European dishes. Chanterelles can last up to ten days in the fridge which is longer than most other mushrooms. Let these mushrooms stand out by simply sauteeing them with garlic and herbs. 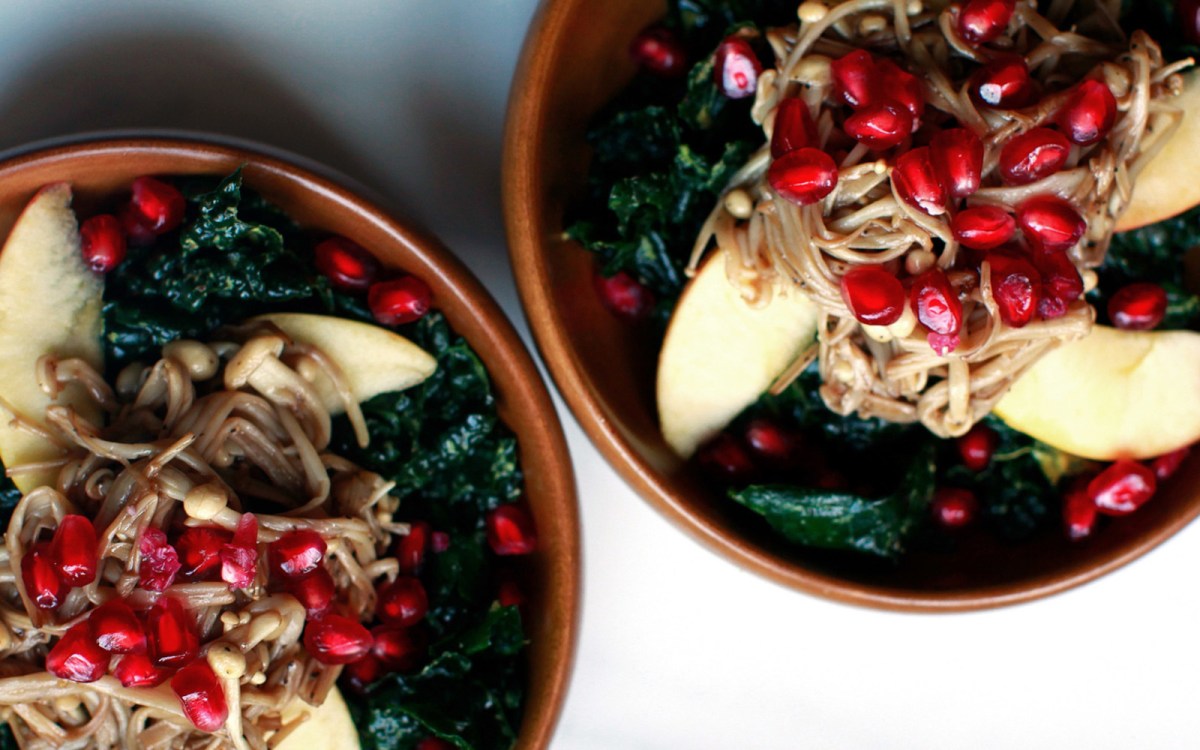 Enoki mushrooms, also known as golden needle mushrooms, are common in Asian cuisine. They are long, with little caps and have an almost crunchy texture. Most of the stems can be eaten after trimming off the tough end. Enoki can also be bought canned. Enoki are good for stir-fries and can also be eaten raw.

Get to know enoki mushrooms by making this Kale and Enoki Mushroom Salad. 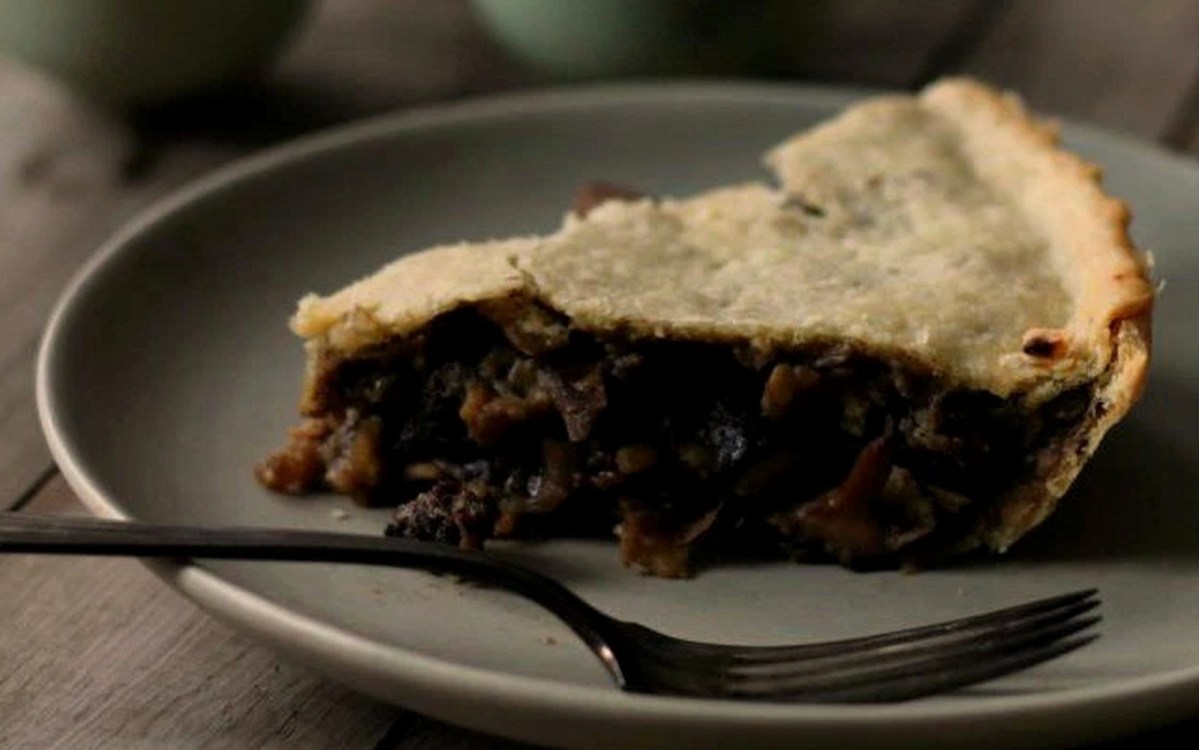 Morels are expensive mushrooms, up to $20 per pound, and highly prized by chefs. They have a characteristic honeycomb top, a spongy, chewy texture, and a delicate, savory, nutty flavor. Because they absorb liquids, they are good for gravies and sauces. Morels can also be bought in dried form which is much less expensive.

Try morels in this Tourtière (French Canadian Savory Pie) which uses the dried type plus a few other mushrooms. 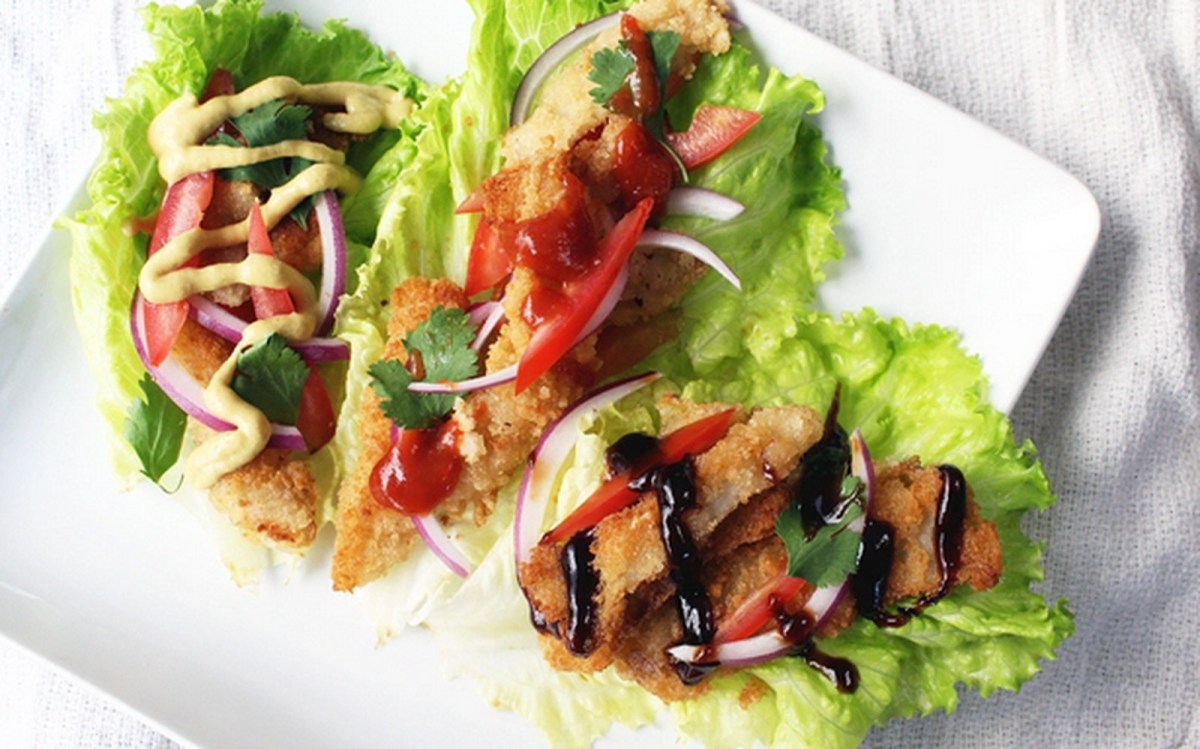 Black Trumpet mushrooms are actually a type of chanterelle. They’re shaped like a funnel and come in a brown, gray, or black color. Their flavor is said to be similar to black truffles with a smoky, rich flavor and a pleasant, fruity aroma.

King trumpets are actually in the same family as oyster mushrooms. They have thick, meaty stalks and caps that hold up well to cooking. The flavor is buttery and sweet. Try this Trumpet Mushroom ‘Calamari’ for a vegan version of a seafood favorite.

Mushrooms are healthy, versatile and delicious. With so many types of mushrooms, there’s always something new and exciting to try. For more recipes, see 10 Delicious Ways to Cook with Mushrooms, Stuff Yourself with These Stuffed Mushroom Recipes, Big and Small, and 21 Ways to Enjoy All Kinds of Mushrooms.