15 Comforting and Creamy Chowders to Fill Your Cravings 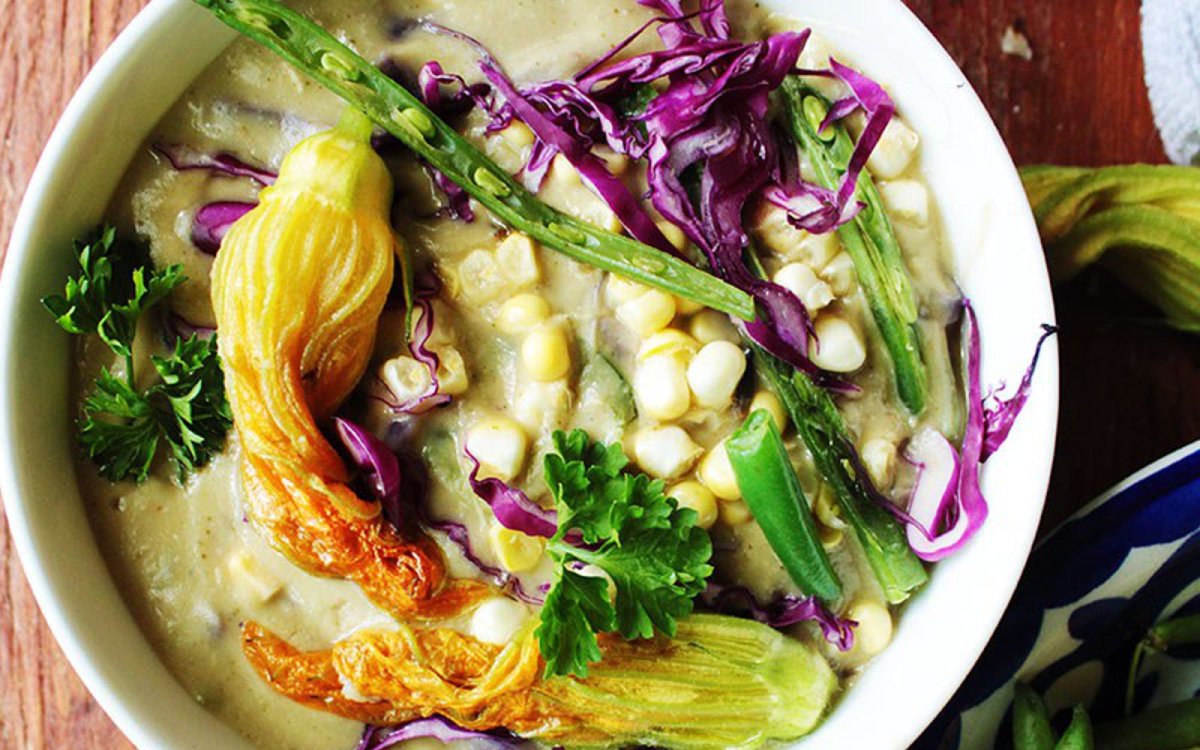 Some days all you want is a big bowl of happiness, also known as creamy, delicious, and filling soup! The best part about soups is that the variations are endless. So whether you want a crunchy chowder full of healthy veggies, or a simple one for lunch, you can make it at home with the right recipe. We have gathered 15 creamy chowder recipes for inspiration from the Food Monster App!

Have you ever though about mixing corn and coconut? Well, here is your chance. This soup is both fun, creamy, and so yummy! The Coconut Corn Chowder by The Whole Foods Diet can easily become your new favorite if you give it a shot.

A smoky soup to keep you warm the coldest of the nights. This Smoky Corn and Potato Chowder by Dora Daily has grilled corn in it, and are loaded with celery, onion, potatoes, and blended until it’s smooth and creamy. Top it with extra corn and spices, and add some bread on the side, and you’re all set for a bowl of goodness!

Have you seen anything so creamy looking before? This soup definitely has it all, it’s delicious, hearty, and packed with vegetables like carrots, potatoes, broccoli, and kale. The creaminess comes from a blend of raw cashews and almond milk. Yes, you are allowed to drool over the Loaded Vegetable Chowder by Erin Beccia!

A rich base of red potatoes is added to this soup, including raw cashews and hemp seeds. The Creamy Potato Chowder by Cheri Alberts is totally indulgent and creamy, and will keep you full for a long time.

This is a vegan version of the New England clam chowder, where the oyster mushrooms really make an appearance as a flavorful experience. Potatoes, onions, and celery are also added, including a creamy, cashew-based broth (that is homemade!). The Clam-Free Chowder With Homemade Vegetable Broth by Veganize It! is a soup different from any other you have made, so you should definitely give it a try!

When you’re craving a little extra from your soup, top it with totally plant-based bacon made out of coconut! The Winter White Bean Chowder With Kale and Coconut Bacon by Christine DesRoches is so dreamy (and creamy!) that you’d wish you made more!

Red proteins gives this soup a lot of protein and flavors, and the best part about it is that it doesn’t take you more than 30 minutes in total to make this filling soup! The Red Lentil Corn Chowder by Kristen Genton is for sure the perfect weekday dinner!

Glam it up with the Manhattan Glam Chowder by NYC Vegan is red and tomato-based, and you can find it all over Manhattan. But, it’s so much better when you make it yourself! Stock up all the ingredients and eat the iconic New York City soup for your next meal.

Forget about the winter weather for a while, and escape into this comforting, Smoky Potato Corn Chowder by Molly Patrick! It is also super easy to whip up, and the mix of corn, potatoes, delicious herbs, makes a perfect and flavorful soup!

Add some corn, sweet potato, and top it all with chips, and you’re almost there! This comforting, indulgent soup has natural sweetener to make the perfect blend of sweet and savory. The Creamy Corn Chowder by Margaux Mouton is perfect for any day you’re craving some real comfort!

A perfect soup for any time of the year! Corn, red bell pepper, and a whole bunch of spices makes a delicious soup filled with flavor that you’re gonna love! Top the Creamy Corn Chowder by Diane Smith with some cilantro for the perfect finish!

Get a taste of summer with the Summer Vegetable Chowder by Anne McGee! The soup is creamy, rich, and so velvety. It gets its texture from a rich array of produce, along with a fat scoop of cashews, and added with potato chunks, onions, corn, garlic, nuts, and squash for the yummiest combination.

Make the soup, and eat the bowl too! Yes, we’re not kidding. The Potato and Corn Chowder Taco Bowl by Florian Nouh are placed in a crunchy tortilla bowl, which you can break off in pieces and dip in the yummy soup that has creamy potatoes blended with coconut milk and simple seasonings like salt, pepper, and chili powder.

Some nights are just calling for a creamy chowder like the Creamy Not-Clam Chowder by Kathleen Henry! This totally plant-based, smoky mushroom clam chowder is super-duper creamy and so thick, which makes it very rich and hearty.

Haven’t tried raw soups just yet? Then this is the perfect recipe to get you started! The Raw Corn Chowder by Mark Reinfeld combines macadamia nuts and fresh corn which makes it creamy and light. If you want an extra crunch, add some red bell peppers and top it all with black sesame seeds.

Decisions, decisions. It’s true what they say, the more choices you have, the more difficult it is. But, we’ll make it a little more difficult for you, and remind you to download the Food Monster App, which is available for both Android and iPhone, and can also be found on Instagram and Facebook. The app has more than 15,000 plant-based, allergy-friendly recipes, and subscribers gain access to new recipes every day. Check it out!