Vegan Latkes and More: 18 Recipes for a Festive Hanukkah 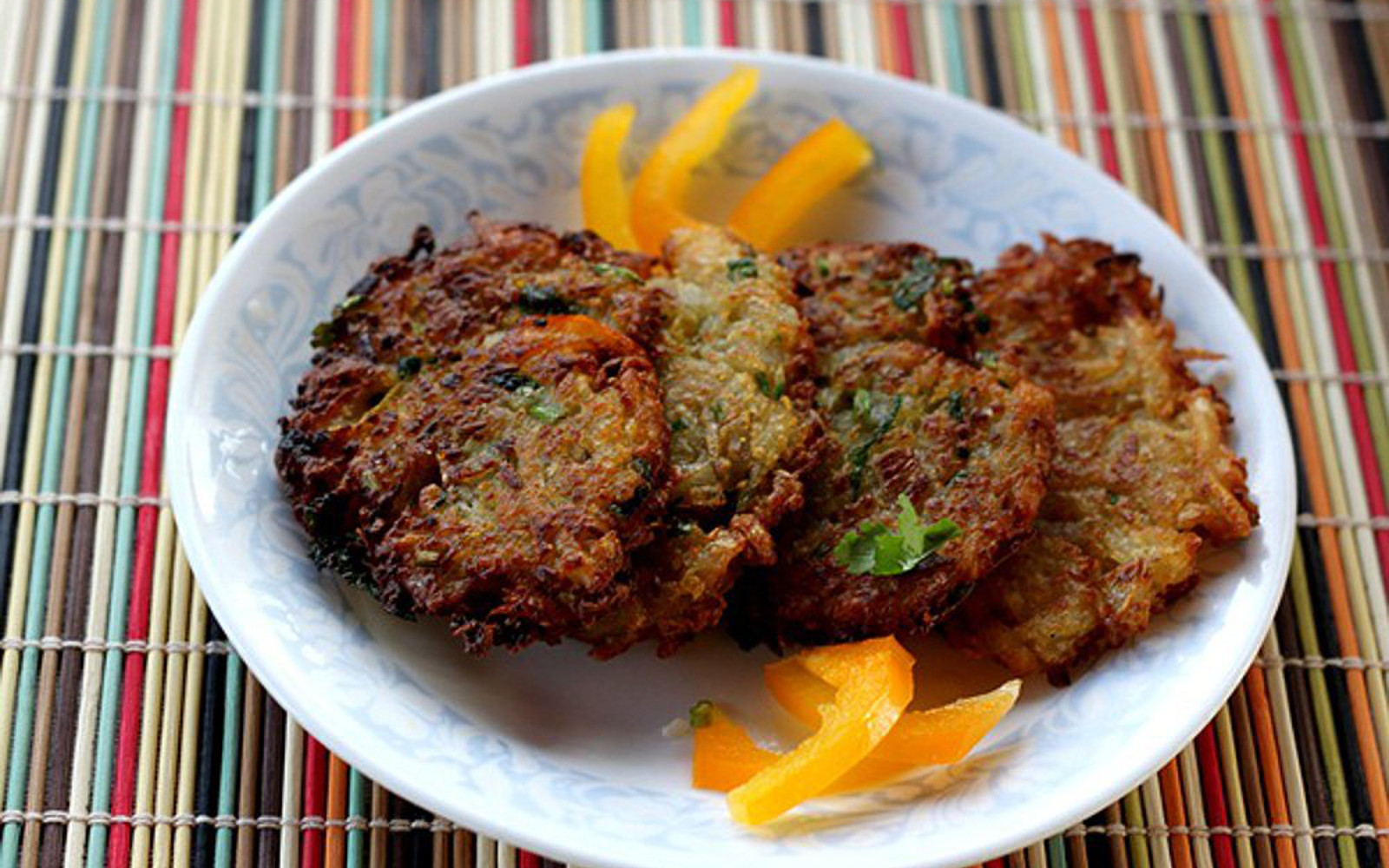 Hanukkah is here and that means lots of traditions – playing with dreidels, lighting the menorah, and eating lots of fried foods! Hanukkah celebrates the victory of the Maccabees, the rededication of the Holy Temple in Jerusalem, and the miracle of oil lasting eight nights when there was only enough for one night. It’s because of this miracle that we celebrate the holiday with lots of oil in the form of fried foods. Latkes (potato pancakes) and sufganiyot (doughnuts) are both traditional Hanukkah recipes.

Of course, you can also have a healthier holiday and not fry everything. With a few substitutions – sweet potatoes for latkes and raw doughnuts — you can also indulge in all the holiday goodies without guilt. We have lots of recipes to make your holiday festive. See 8 Ways to Make Your Hanukkah Miraculously Delicious and Celebrate the Festival of Lights With These 18 Vegan Hanukkah Recipes. Then, read on for lots of latke recipes and other delicious dishes that will make your Hanukkah festive and joyous. 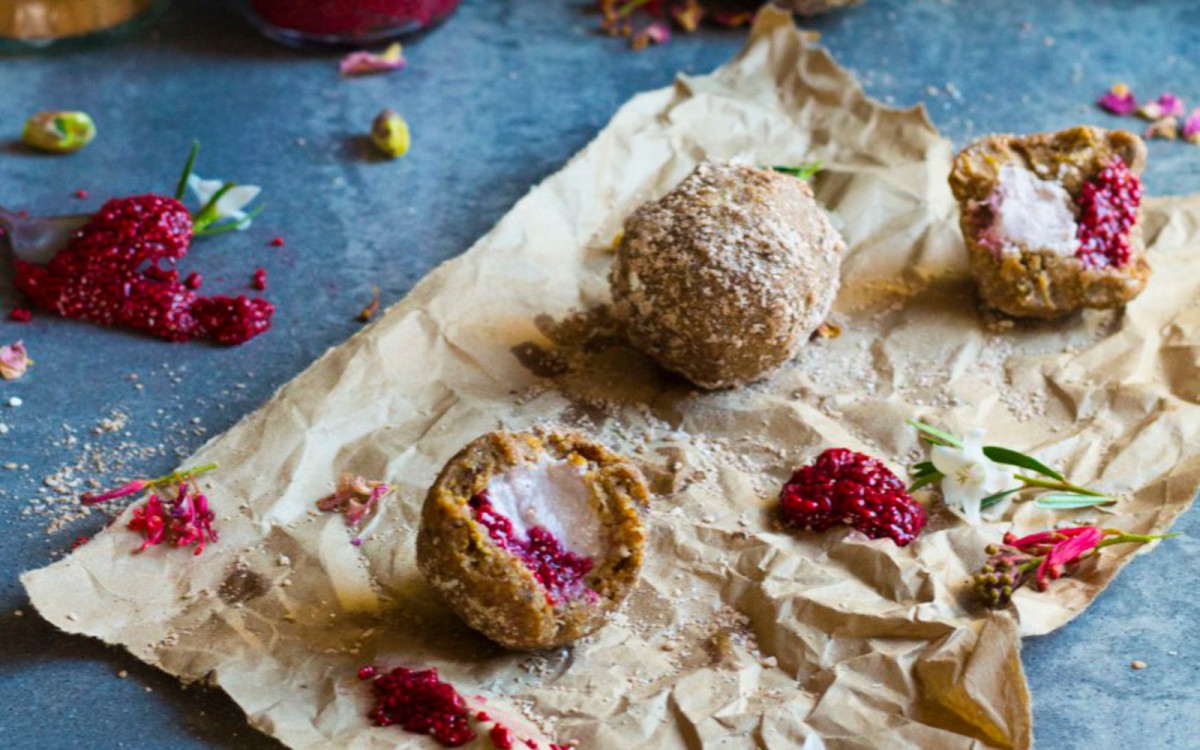 Anthea Cheng‘s Raw Cinnamon Jam-Filled Doughnut Bites are filled with creamy cashew ice cream and gooey strawberry chia jam. Every bite is bursting with flavor! We recommend making a big batch of them for those afternoons/evenings where you just want something delicious. 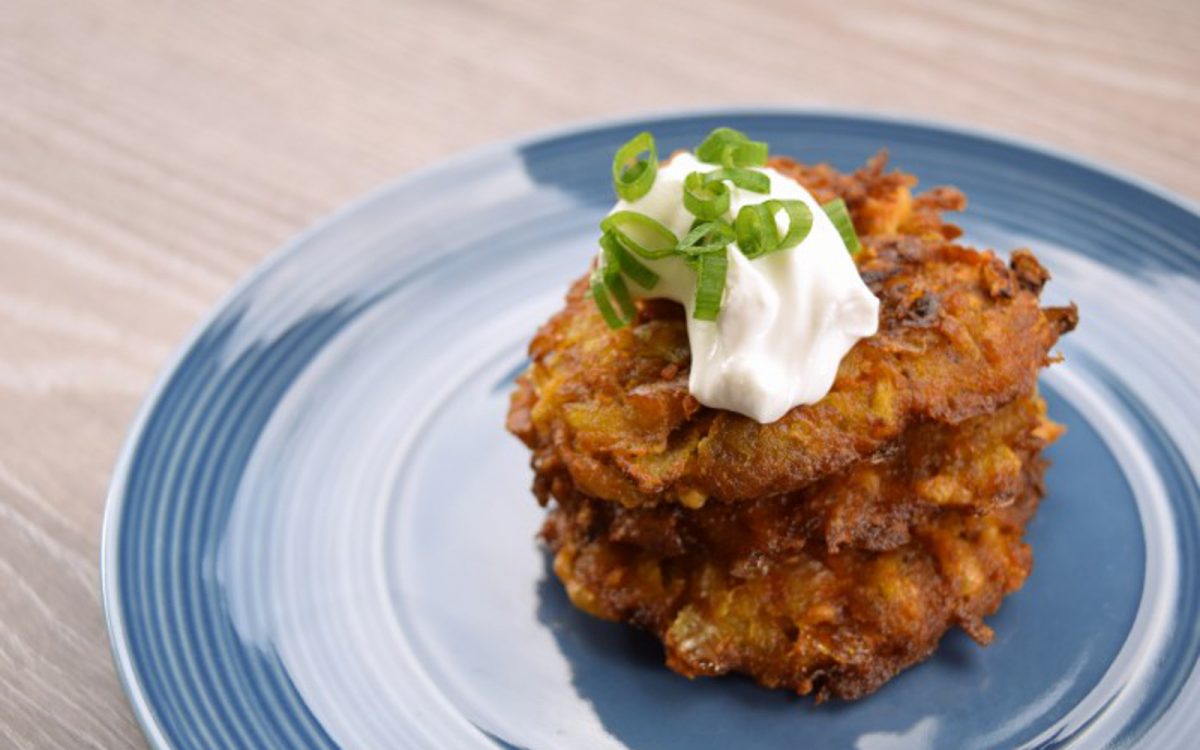 An unexpected fall twist on a traditional dish is surprisingly delicious! Pumpkin is the perfect complement to potatoes in Sarah and Rocco Pirri‘s Pumpkin-Spiced Latkes. Subtle hints of nutmeg, cinnamon, and clove mesh perfectly with the pumpkin and potato base of this latke. Top it with sour cream and onion to make it even more interesting! 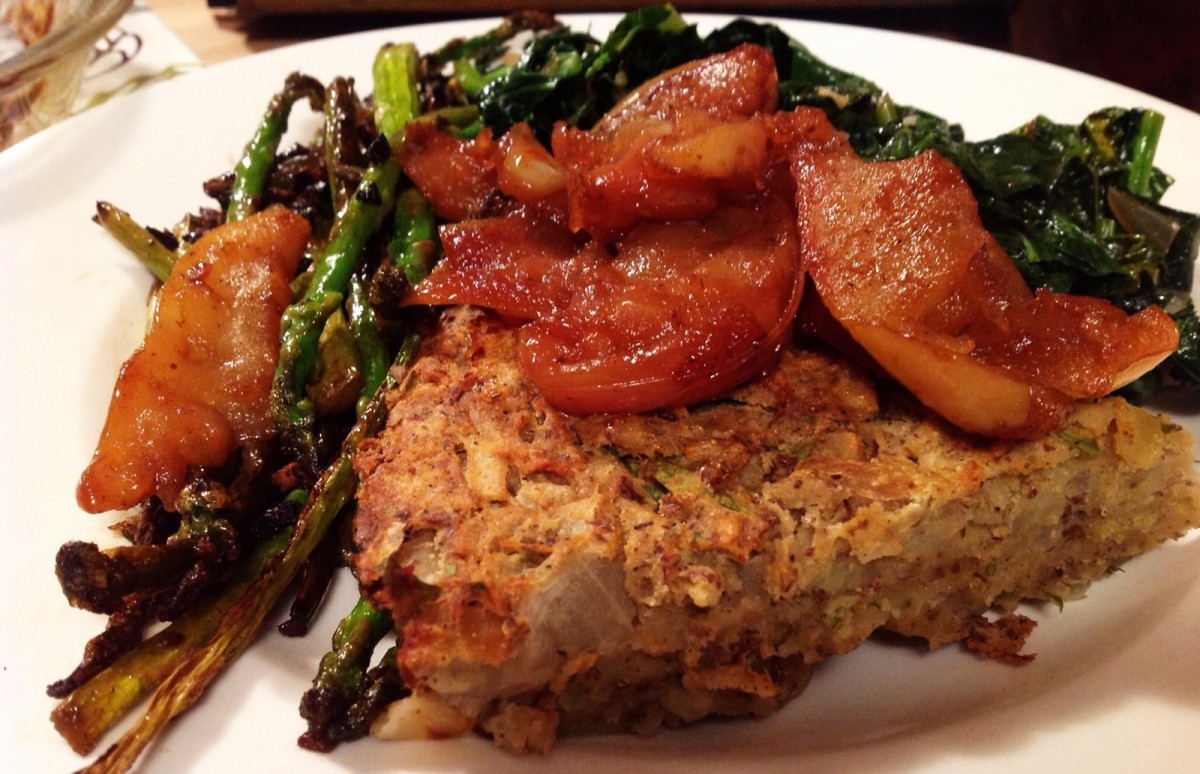 Kugel is like a giant latke pie! It’s certainly easier to make and healthier than frying up a bunch of latkes. This Potato and Onion Kugel by Rhea Parsons is topped with sauteed apples instead of the usual apple sauce, but you can serve it with vegan sour cream as well. Bake this in muffin tins for individual servings. 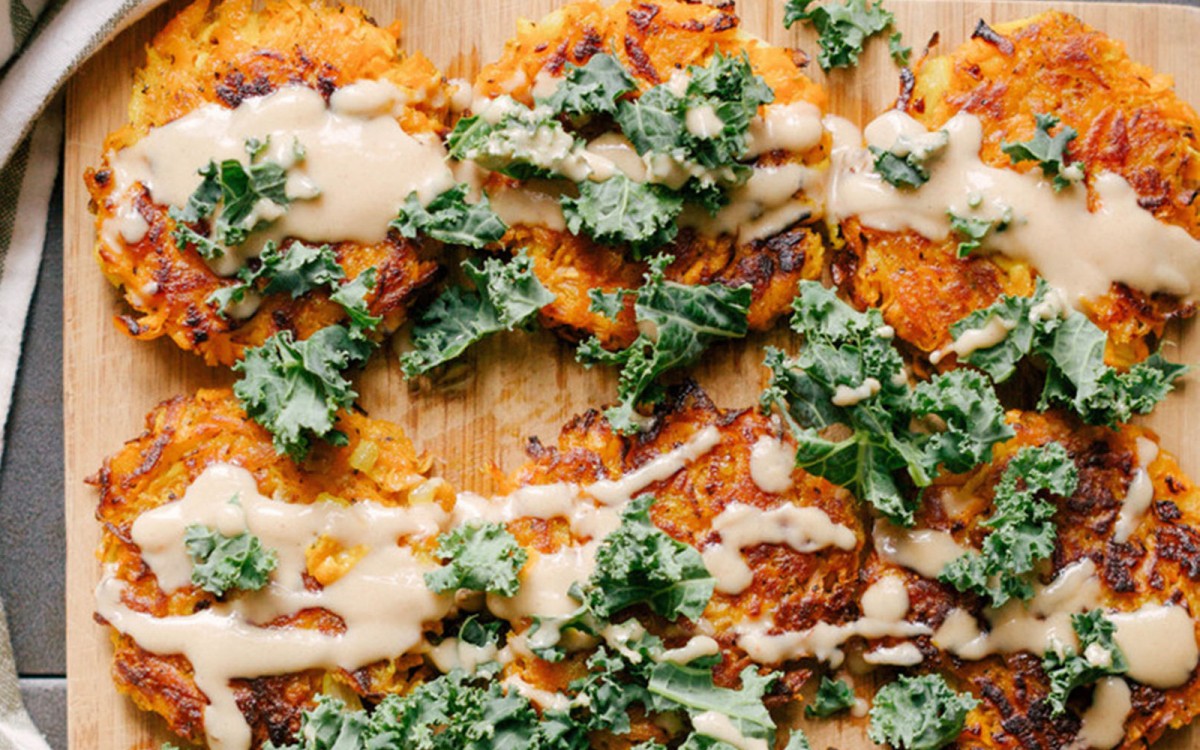 In this recipe for Sweet Potato and Apple Latkes by Maya Popovich, sweet potato and apple are shredded and combined to form crispy and unique latkes. The latkes are a little sweet and a little tangy from the added onion and they’re perfect when paired with the creamy lemon tahini sauce. These can be ready in little to no time, so they also make a fantastic snack! Serve with kale if you’re craving leafy greens on the side. 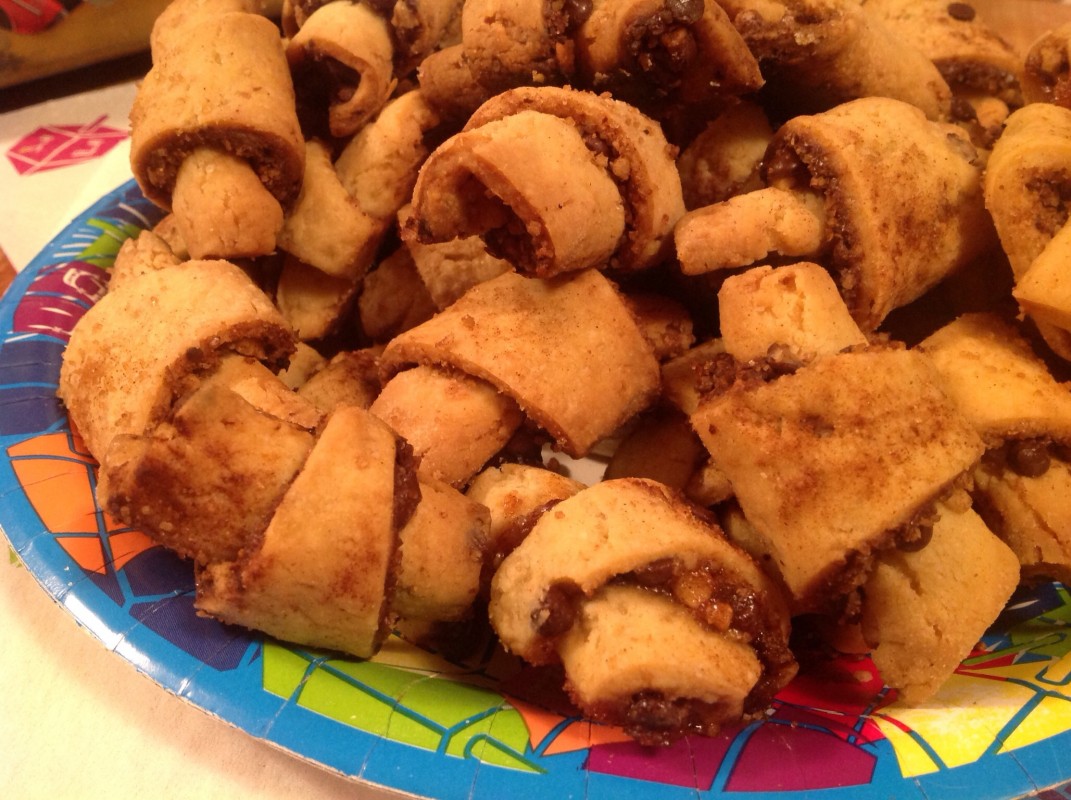 These vegan Chocolate Hazelnut Rugelach by Rhea Parsons are tender, crunchy, and delicious. And the chocolate hazelnut filling inside is incredible. The rugelach is so pretty and yummy; they would make a perfect gift for friends and neighbors. 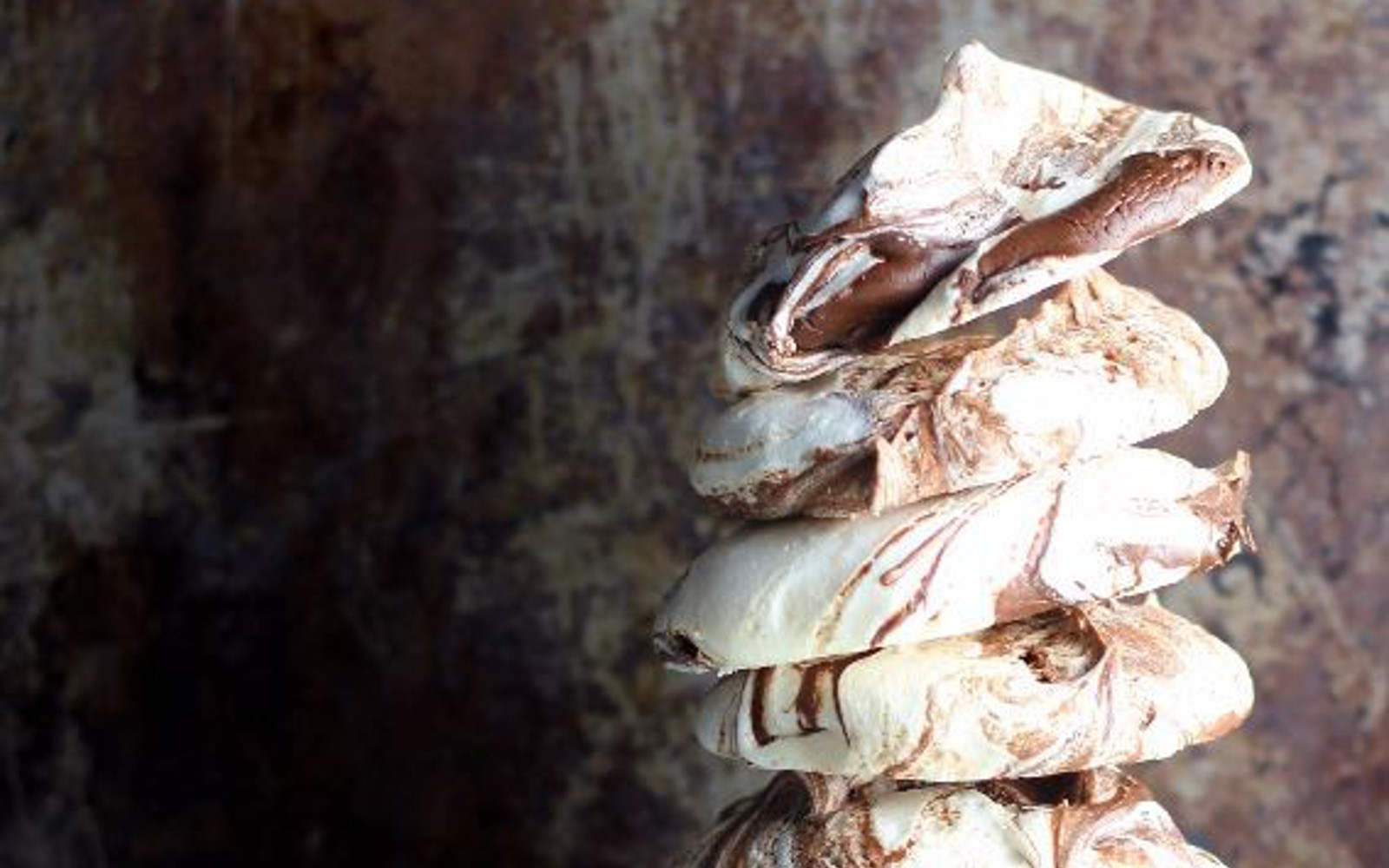 Source: Chocolate Swirled Meringues
How do you make meringues even better? You add chocolate, of course. Sheri Silver‘s crispy, light-as-air Chocolate Swirled Meringues have melted chocolate swirled into the batter. Sweet and sugary, they’re melt-in-your-mouth good and so easy to make. If you’ve never worked with aquafaba before, these are a must-try. 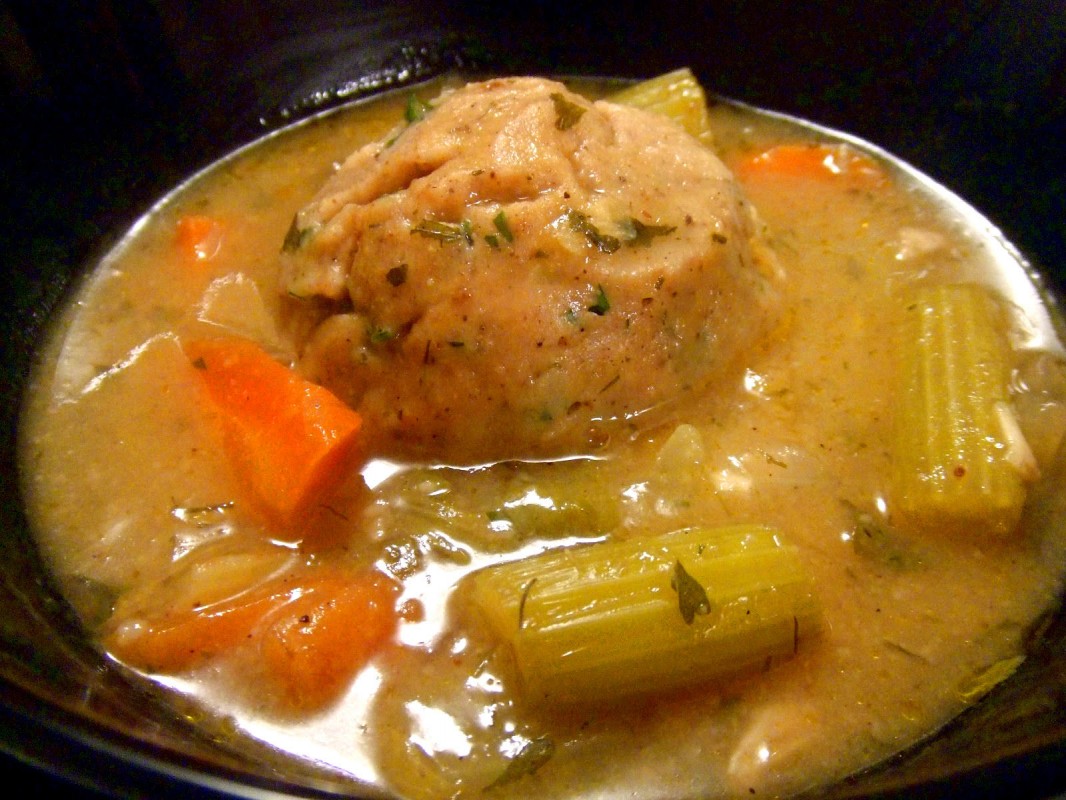 Holidays, family, and memories – they go together like “chicken” soup and vegan matzo balls. This Matzoh Ball Soup by Rhea Parsons may not be exactly the same as the traditional version but sometimes it’s good to break from tradition a bit. Have eight matzo balls – one for each night! 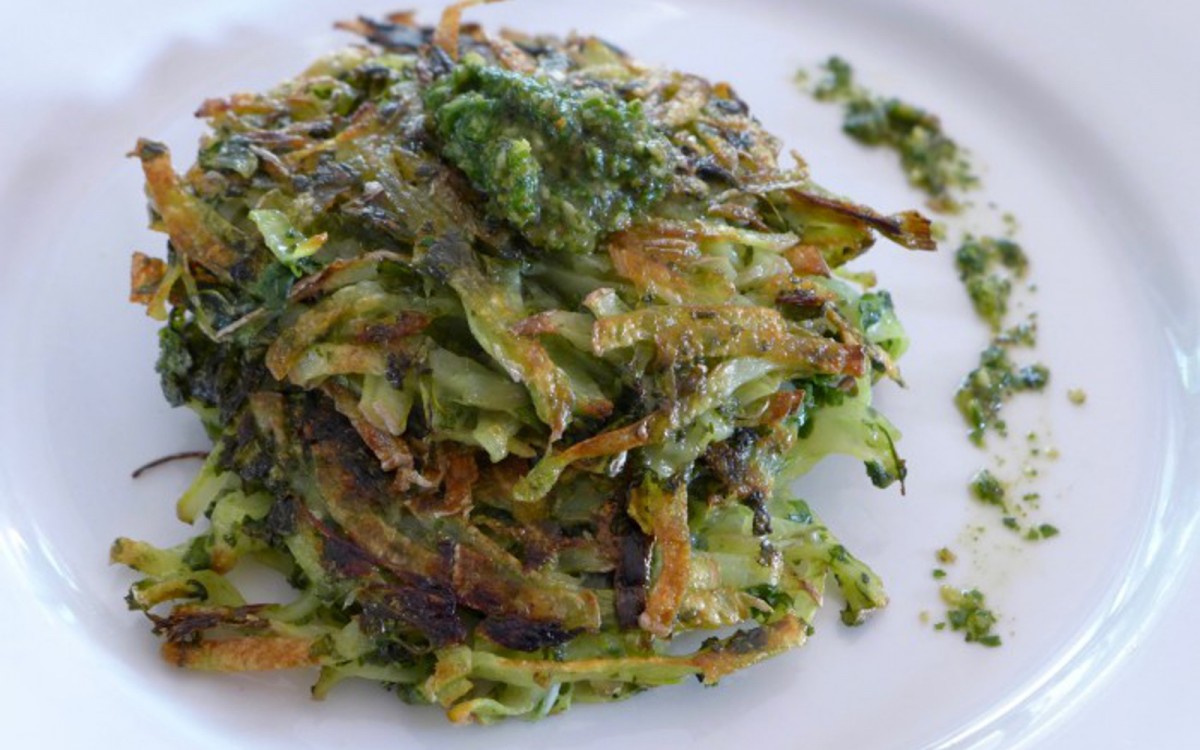 Just one ingredient is all that it takes to breathe new life into an old recipe. Rosalie Livingstone‘s Potato and Kale Latkes have all the goodness of the traditional dish, with the added goodness of fresh kale! Frying them makes them perfectly crispy. Serve them as a side to a tofu scramble or as a snack on their own! 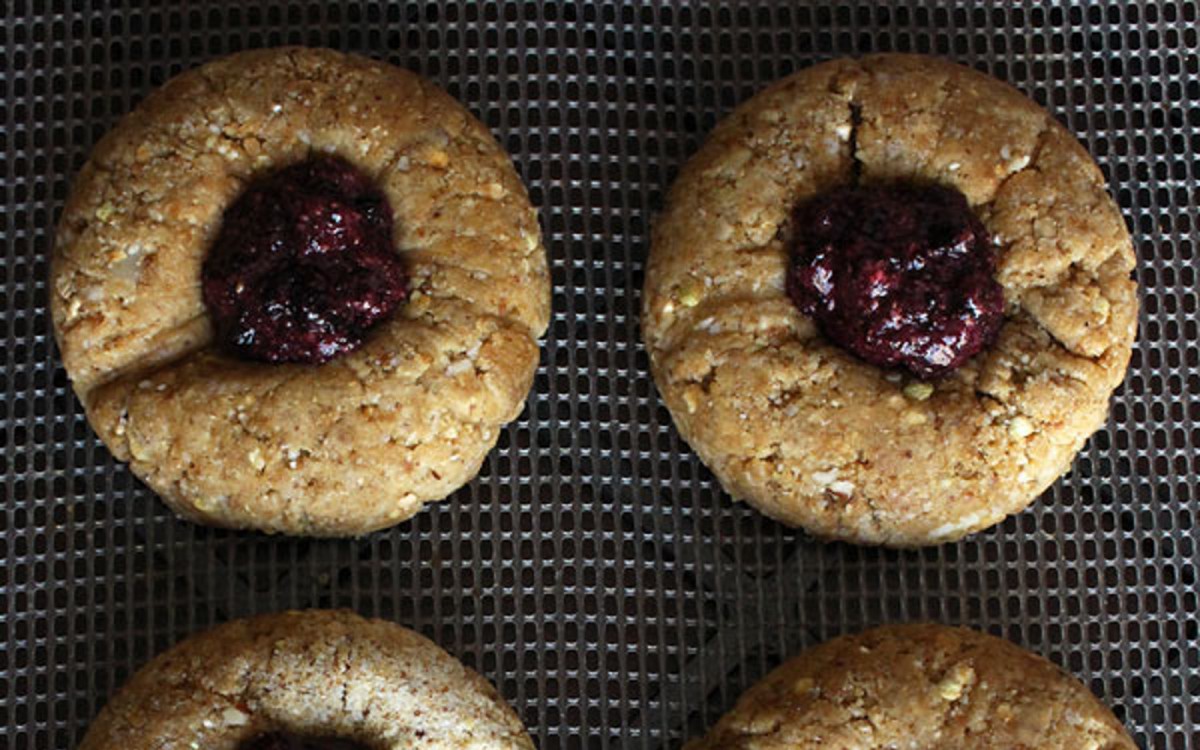 These no-bake, soft, and fluffy Jelly Doughnuts by Amanda Nicole Smith are made from nuts, seeds, dried fruit, and coconut sweeteners. With a dehydrator, these healthy and decadent treats only take about an hour or two. In fact, the hardest problem you’ll have with this recipe is resisting the urge to eat all the batter while waiting! 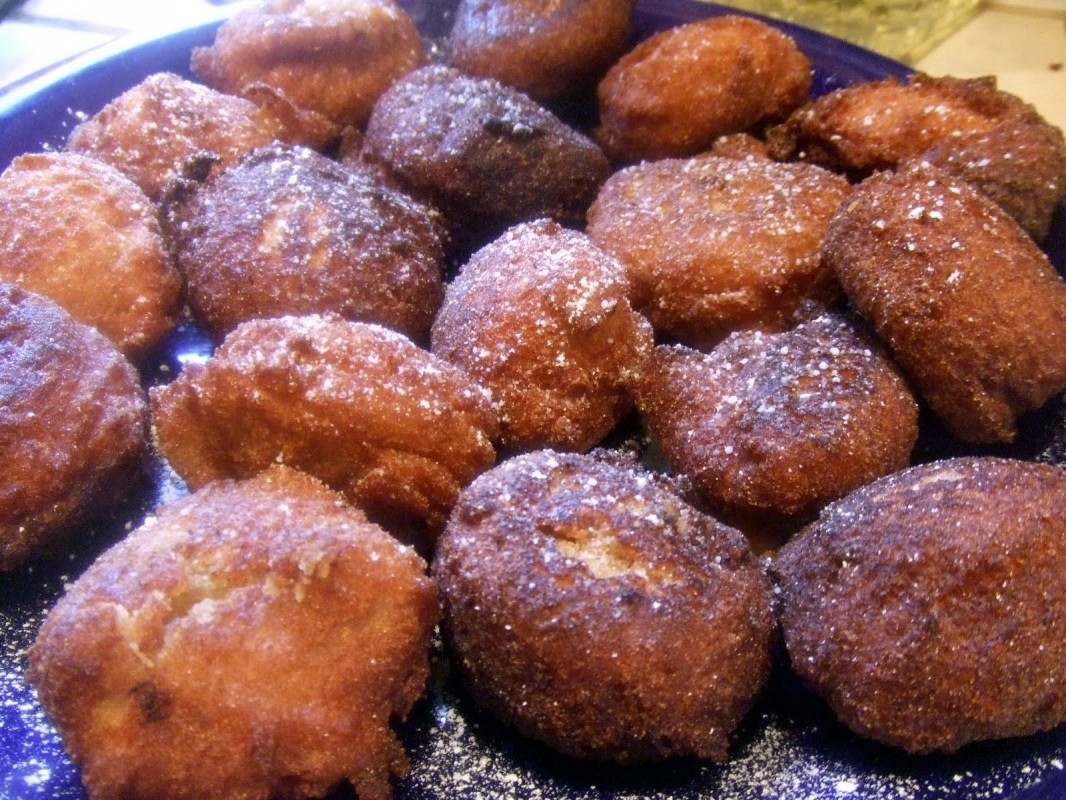 It is tradition to eat sufganiyot on Hanukkah. Instead of doughnuts, try these Banana Beignets by Rhea Parsons. They are fried dough filled with banana. They’re vegan, gluten-free, and really easy to make. And while you can certainly have them for dessert, they are perfect for breakfast or brunch as well.

11. Latkes With Fennel and Avocado Tartare 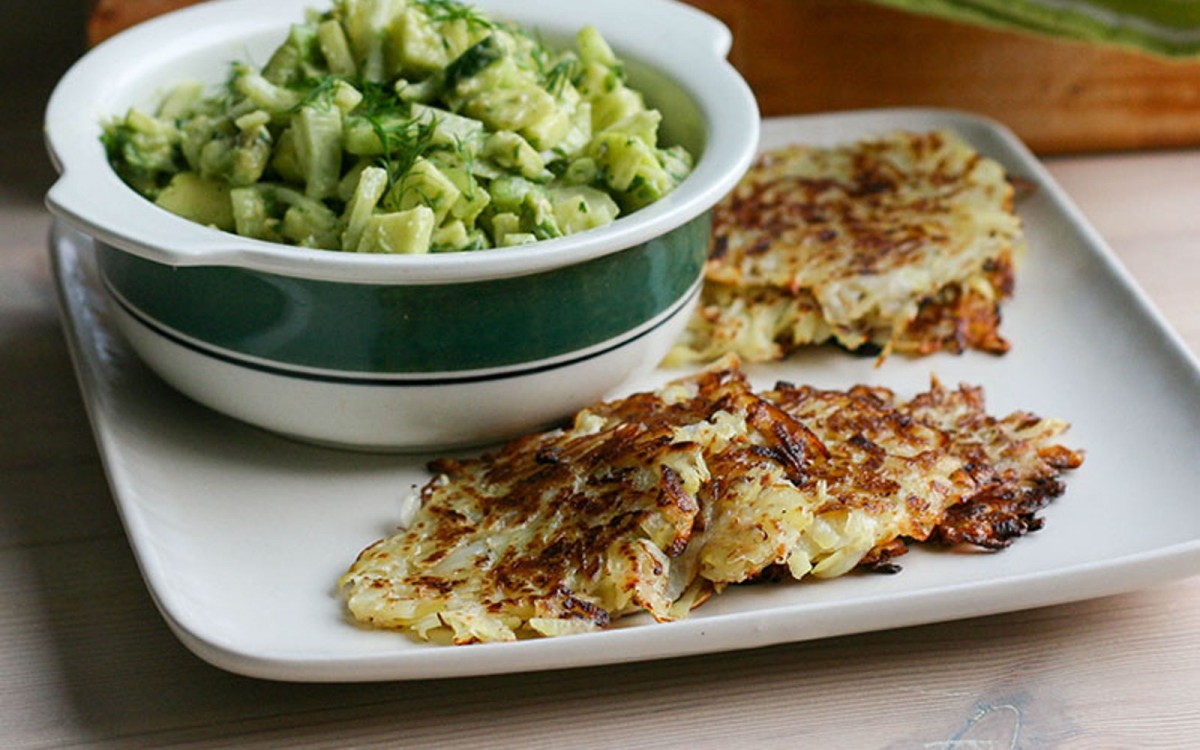 Maikki Vasala‘s recipe for Latkes With Fennel and Avocado Tartare breathes newness into the German style of eating latkes with creme fraiche and applesauce. The fresh flavors of fennel, dill, green apple, and horseradish balance the creaminess of avocado and the crispiness of the latkes. The leftover tartare is also the perfect spread for a sandwich or wrap! 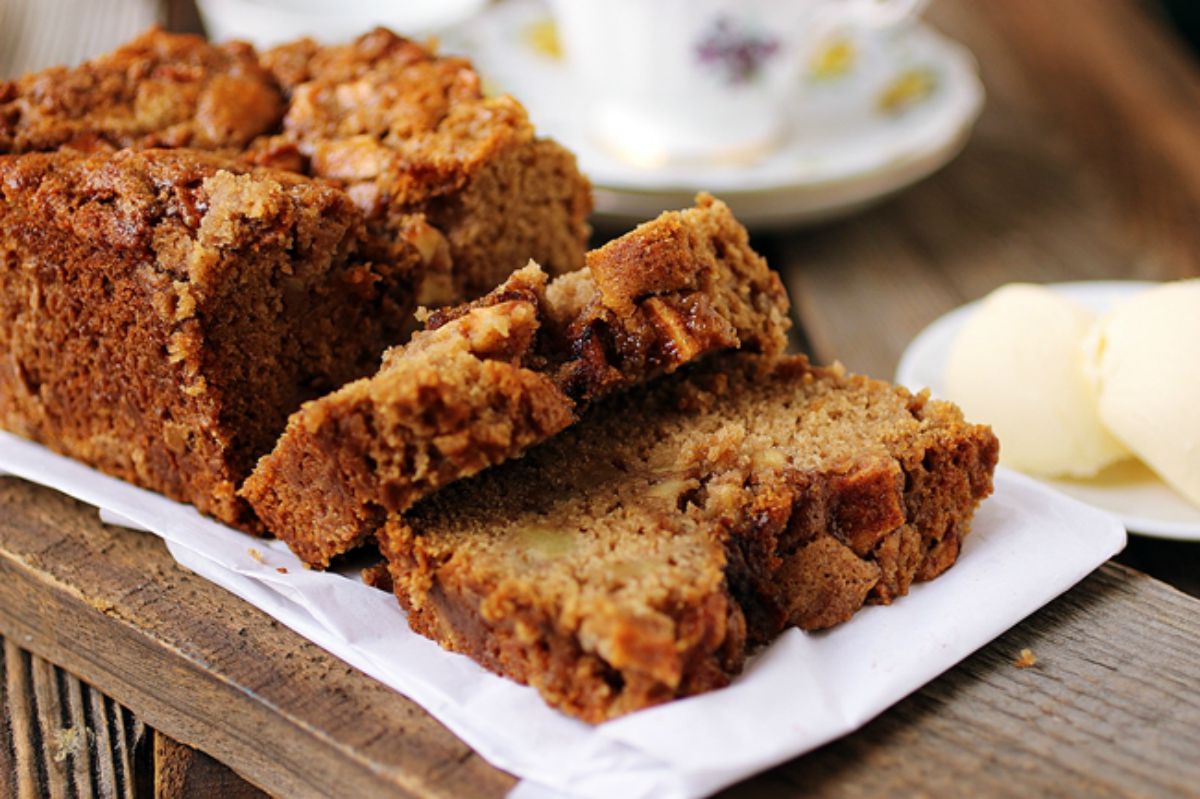 Dora Daily‘s Apple Loaf Cake is sweet and moist and full of apple goodness. The ingredients call for apple butter which you can make yourself or you can use store-bought. You can also use applesauce if that’s what you can find. Top a piece with some vegan butter for a snack any time, or go crazy and top with a scoop of vegan vanilla ice cream for a special holiday dessert. 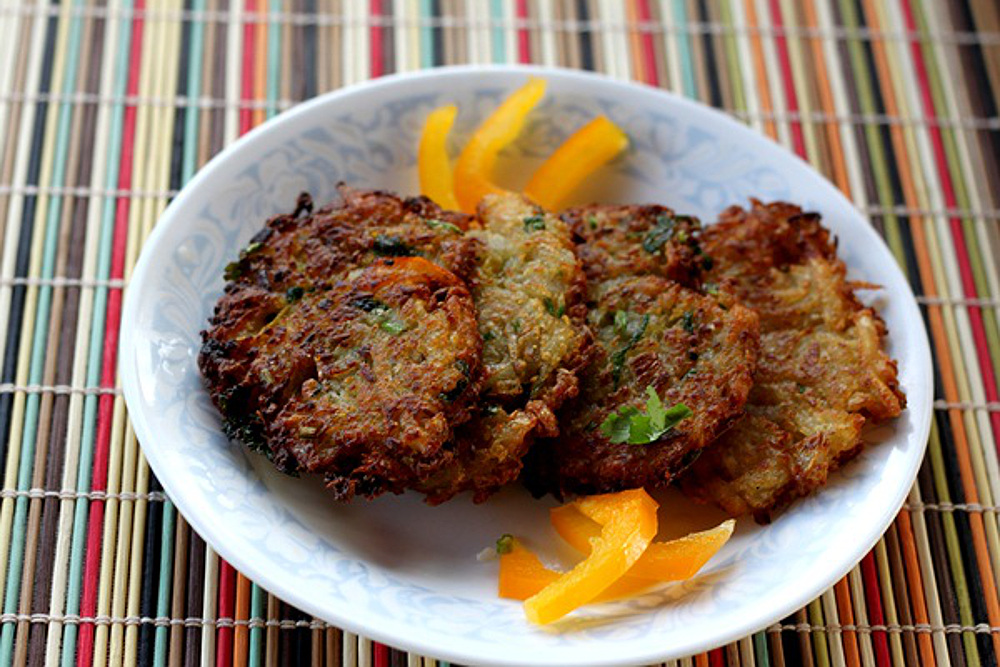 Rinku Bhattacharya‘s Harvest Latkes are a crisp and spicy take on traditional potato pancakes. They’re made with potato and rutabaga with a touch of caraway seeds. They’re crispy, delicious and colorful for a beautiful presentation. 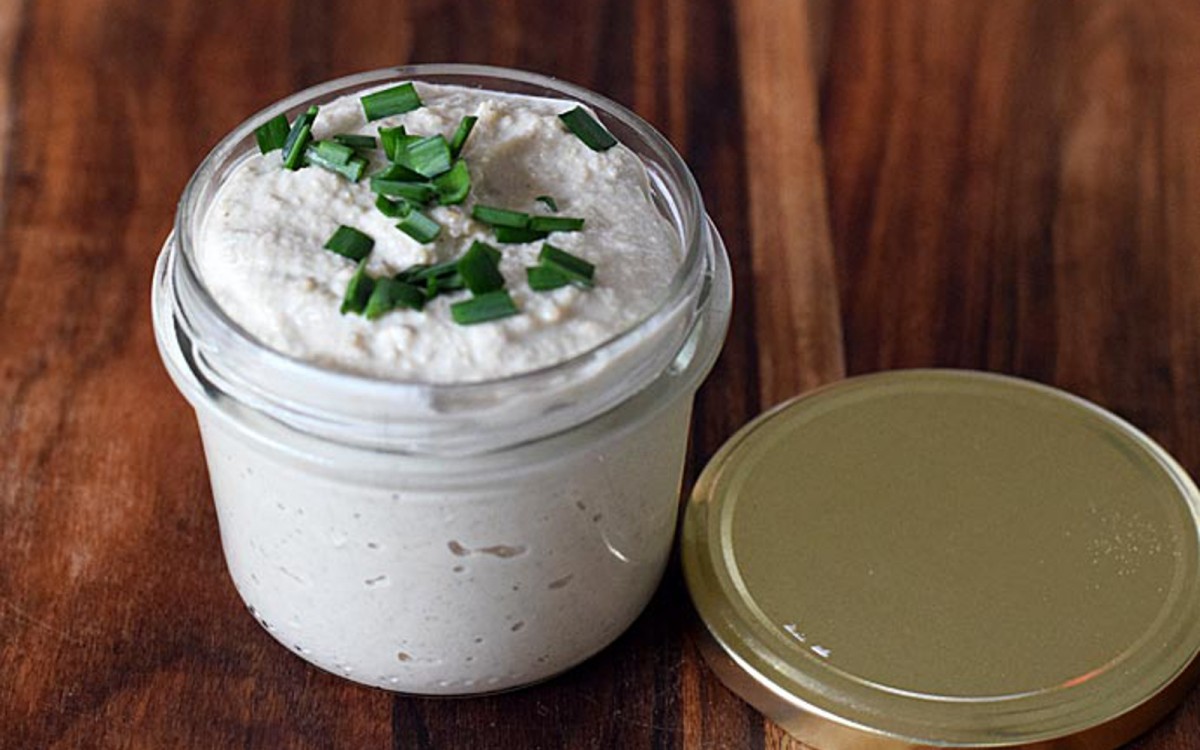 Heidi Turunen‘s Cashew Sour Cream is almost too good to be true. Made with cashews, water, lemon, apple cider vinegar, and a handful of spices, you can likely make this dip right now out of items already in your pantry. Enjoy this with your latkes and kugel. 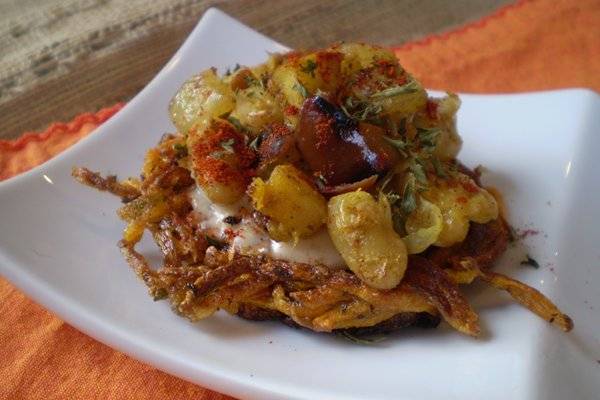 Latkes get all fancied up with Betsy DiJulio‘s Sweet Potato Latkes With Chutney Sour Cream and Curried Onion Apple White Bean Topping. These are golden, delicious, filling, and festive with bold flavors that make them extra-special. 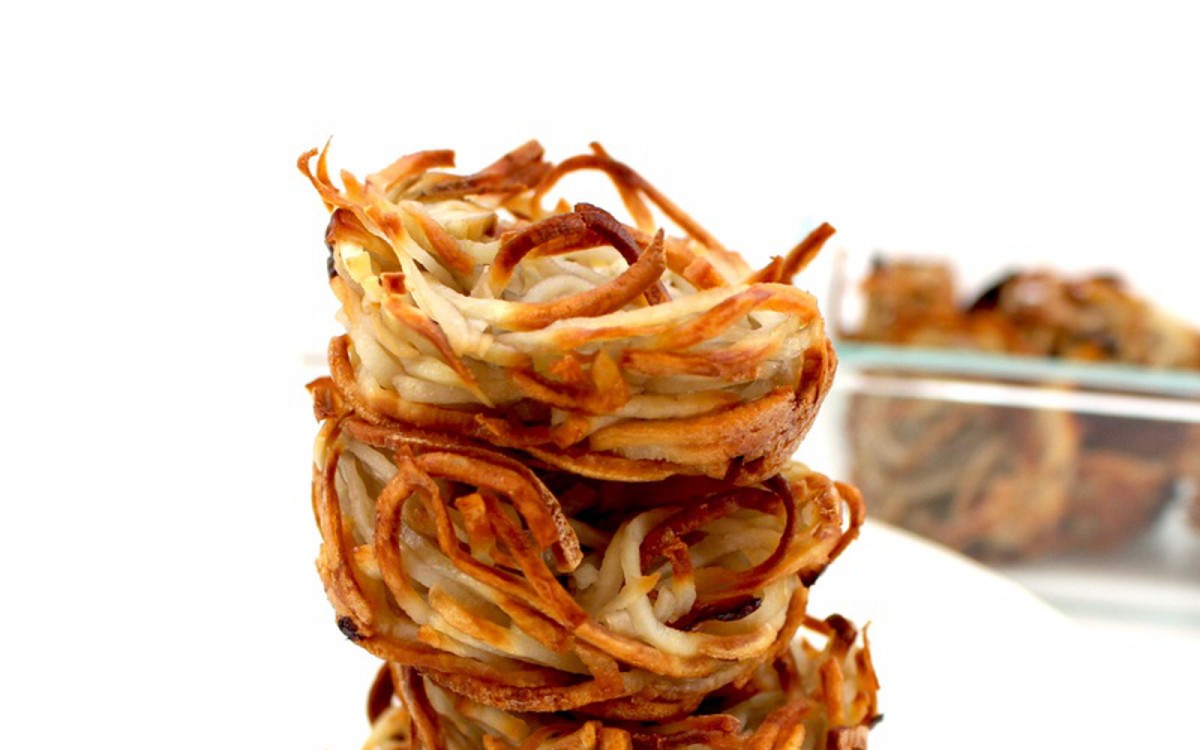 A traditional kugel is a casserole made from egg noodles or potatoes. These lightened-up, oil-free mini Potato Kugel Cups by Annie Markowitz are made by spiralizing potatoes and combining it with onion, garlic, paprika, and cornstarch to hold it all together. They’re easy to whip up, savory, and satisfying. 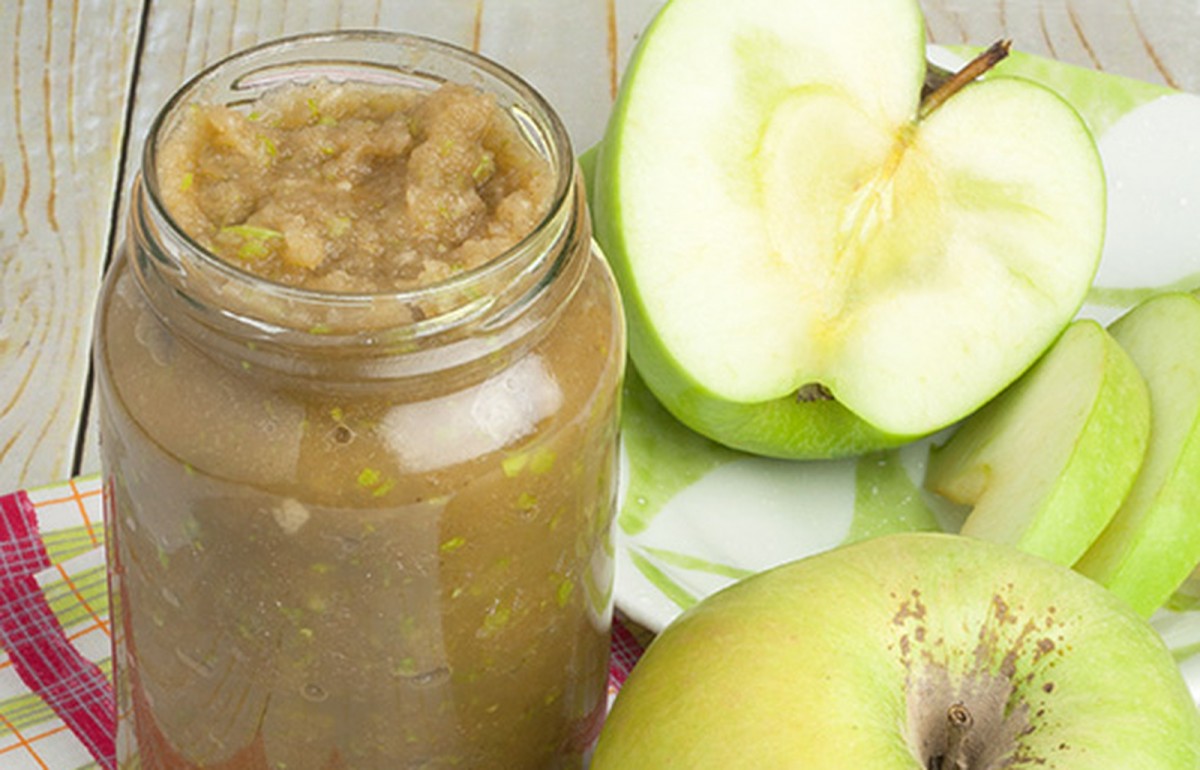 You have to have apple sauce to dip your latkes in. Instead of buying jars, make your own Raw Apple Sauce. Alison Murray‘s recipe is fast, easy and you can flavor it any way you want. This one has a pinch of warm cinnamon. Yum! 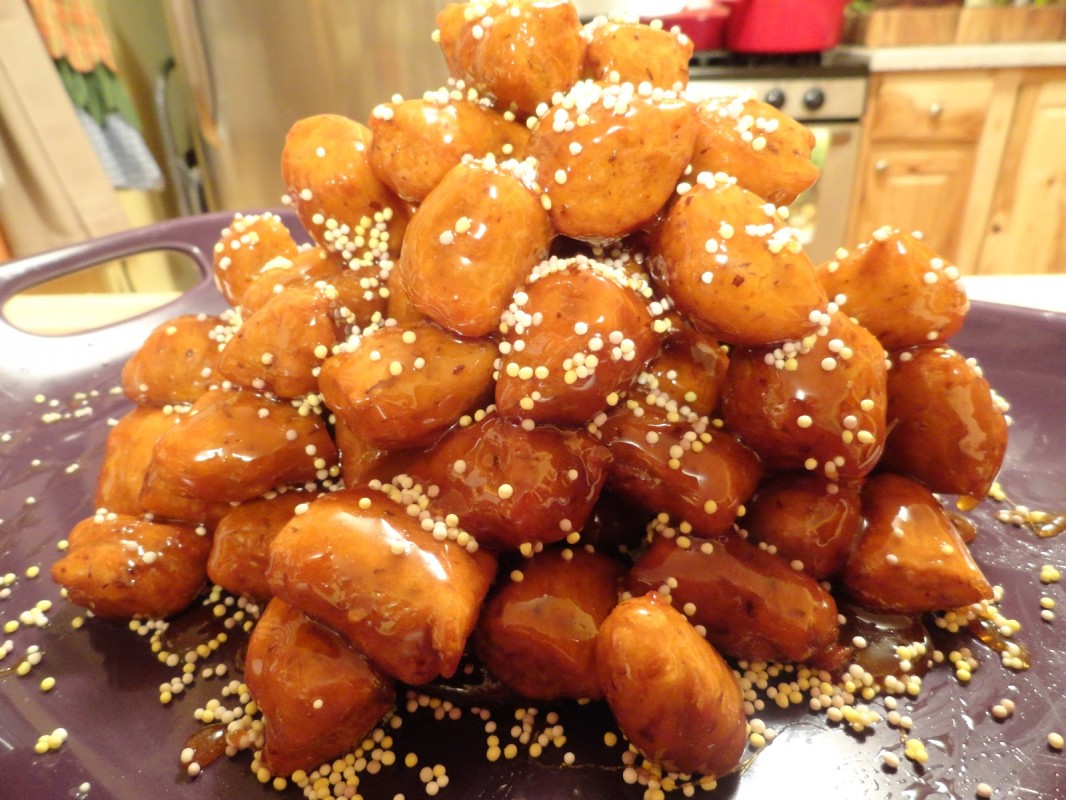 These treats by Rhea Parsons are called Jewish Bimuelos but they’re also called Italian struffoli. Whatever you call them, we call them little puffs of heaven. Fried dough doused in vegan honey and covered with sprinkles, these are pretty and delicious.

Hanukkah is a celebration of fried foods. Even if you go the healthier route and bake your latkes and doughnuts, your Hanukkah will still be sweet and delicious. Happy Hanukkah!