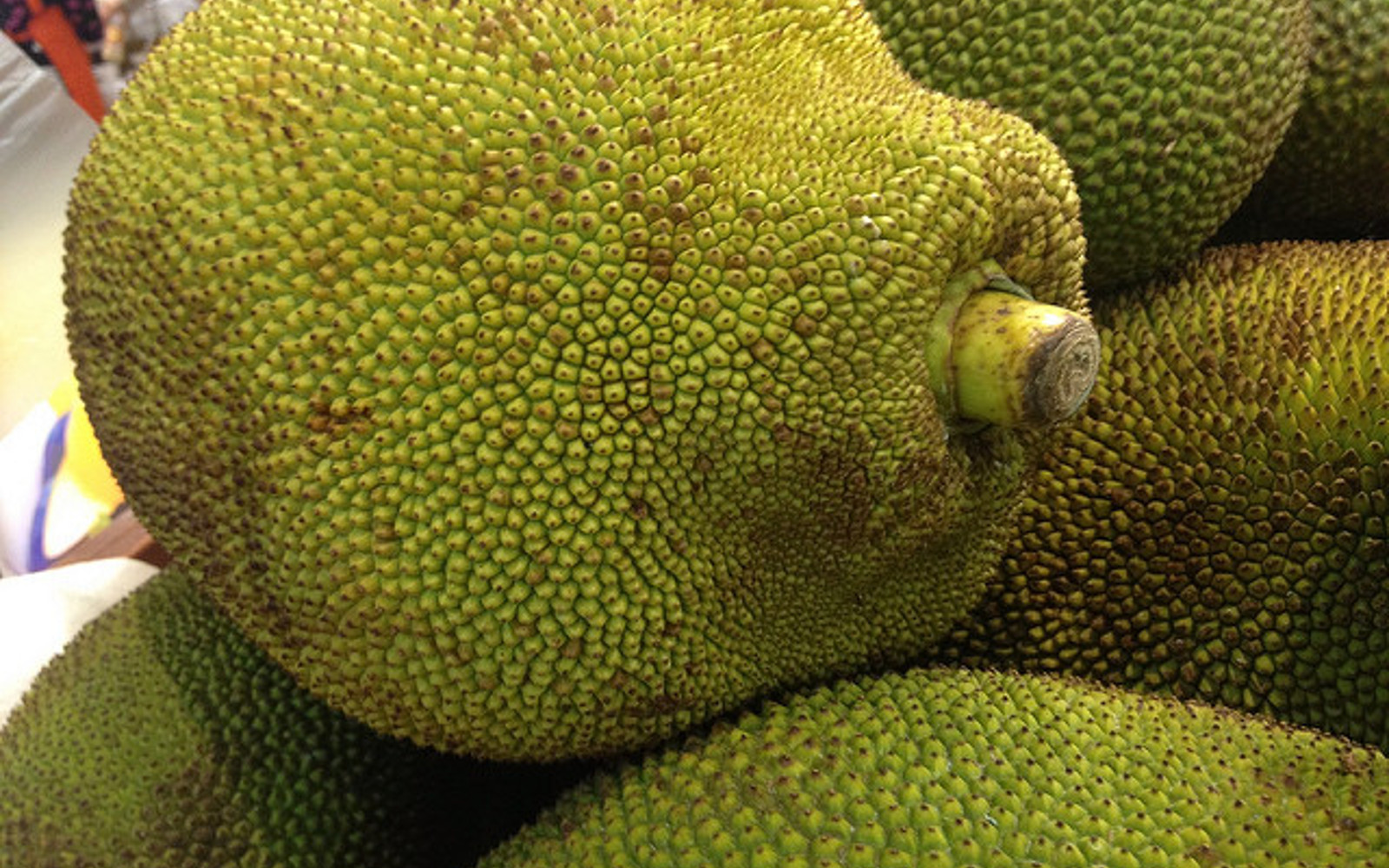 When I joined our local vegetable co-op, I did it because I thought it would be a good way to reduce my foot print and get organic produce. I had no idea that every week would bring a new game of “Identify that Veggie.” Each box went well beyond the expected tomatoes and carrots and usually included some sort of alien life form. If you’ve ever seen kohlrabi, you know exactly what I mean. Here are some of the strange and interesting vegetables you might find in your co-op box and some ways to use them in your every day cooking. 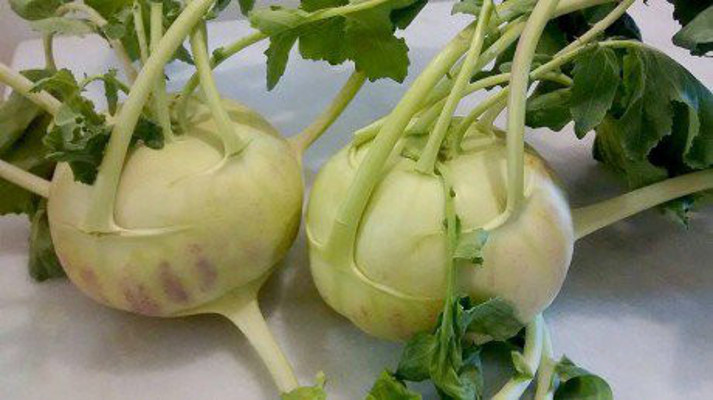 Kohlrabi is the weird cousin in the cabbage family. It is white or purple, but the inside of either is usually the same; a creamy white color. The bulb, as well as the protruding stalks, can be eaten. It is mild and sweet, and tastes almost like broccoli and turnips had a strange looking baby. We love this Kohlrabi Schnitzel Burger, and this Kohlrabi Spaghetti alla Foriana. Raw or cooked, they taste a bit like broccoli stems, but milder and slightly sweeter. For a quick side, line a pan with some parchment paper. Cut the bulb into fries, toss with olive oil, salt, and pepper, or your favorite spices. Bake until tender at 400 degrees (usually around 40 minutes), flipping once halfway. You can also shred the bulbs and sub or add into your favorite fritter recipe. The leaves can be tossed into a salad. 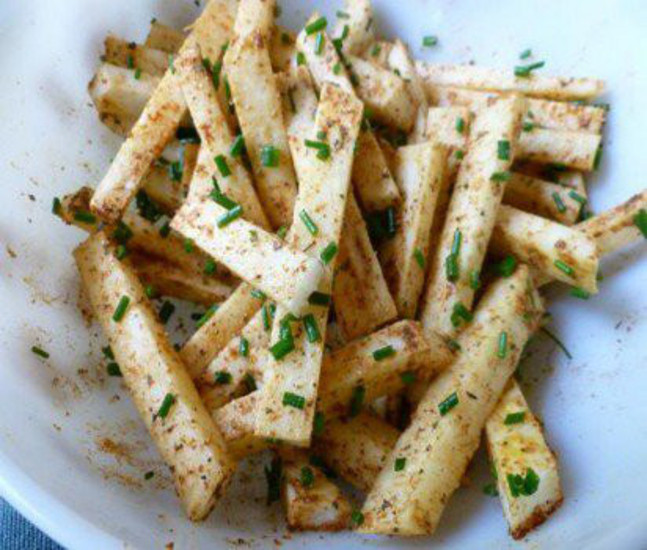 Jicama is part of the bean family and a root vegetable. It is often referred to as the yam bean. It is high in fiber and vitamin C, and minerals like iron and calcium. Only the root is edible (raw or cooked), and unlike the sweet potato, the peel is not. Jicama tastes sweet, almost like a nutty apple, and becomes more potato-like as it grows. Cube and sauté some with some olive oil and veggie broth or even throw it into your favorite salad. Try these Red Cabbage and Jicama spring rolls or these Raw Spicy Jicama fries. Since I am always looking for an excuse to have a burger, I also love this Jicama Burger with Cumin. 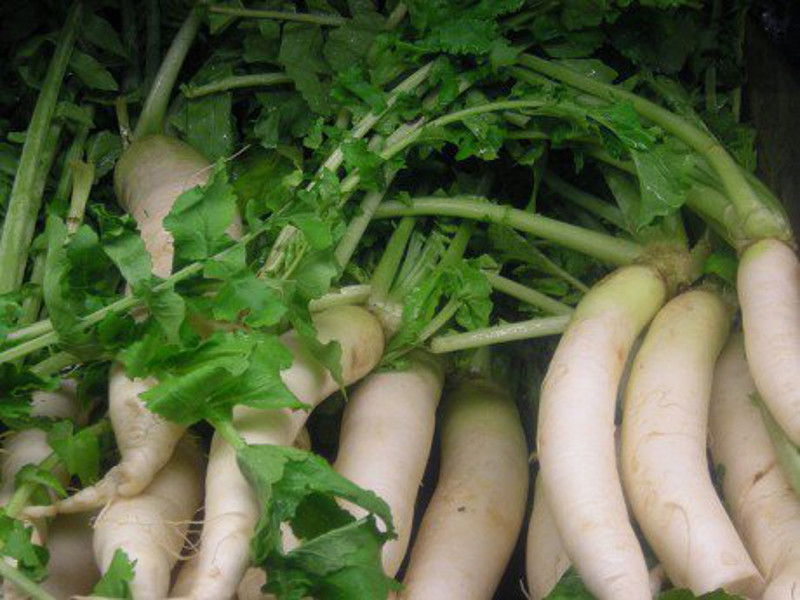 Is that a white carrot? No, it’s daikon, and it’s a radish. It’s loaded with Vitamin C, fiber, and Copper. You could eat it raw depending on its size but you want to cook it once it has grown larger and more mature.  It has a mild taste, with a little bit of the bite you’d expect from a radish. It can be added to soups or stews, but this recipe for Daikon Patties really accentuates its tangy flavor. We also love this Gingery Carrot and Daikon Salad. For an easy pickled daikon, thinly slice one daikon, sprinkle it with salt, and let it sit for a couple of hours. Boil 1/2 cup of sugar, 1/2 cup of water, and 1/2 cup of rice vinegar until sugar is dissolved, and let it cool. Squeeze the remainder of the moisture out of the daikon and set it into a glass container. Pour the mixture over it cover it and let it sit for two days. Voila! 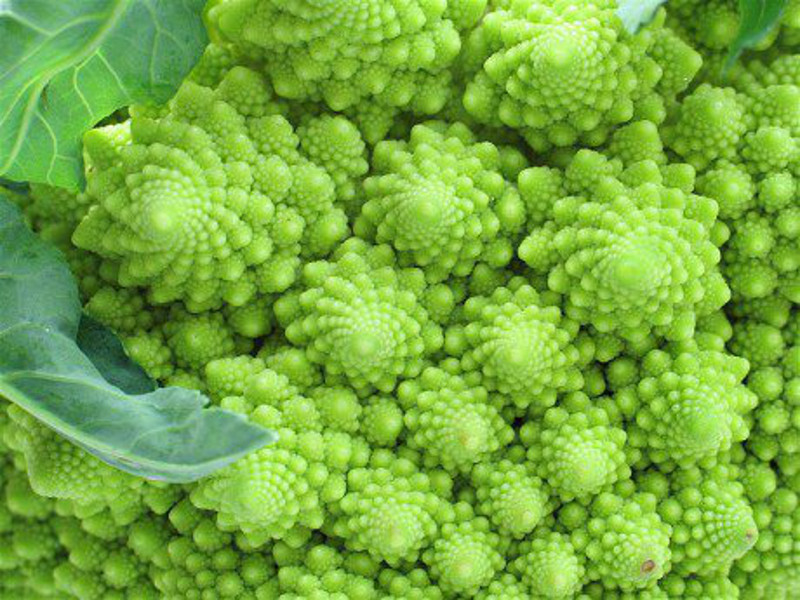 Strange and bright, cauliflowers abound in the co-op box. I was shocked by the purple and orange cauliflower- but when I got to the romanesco, I was taken aback. Romanesco is a beautiful green, bumpy cross between cauliflower and broccoli, both visually and in taste. It is a great source of Vitamins like C and K, fiber and carotenoids. It is beautiful (and of course yummy) in this Teriyaki and Romanesco Beet Bowl. For an easy roasted romanesco, toss with some olive oil, salt, pepper, and garlic powder and place it in the oven at 425 degrees for around 15 minutes or until tender. If you are short on time, throw it into your favorite salad. 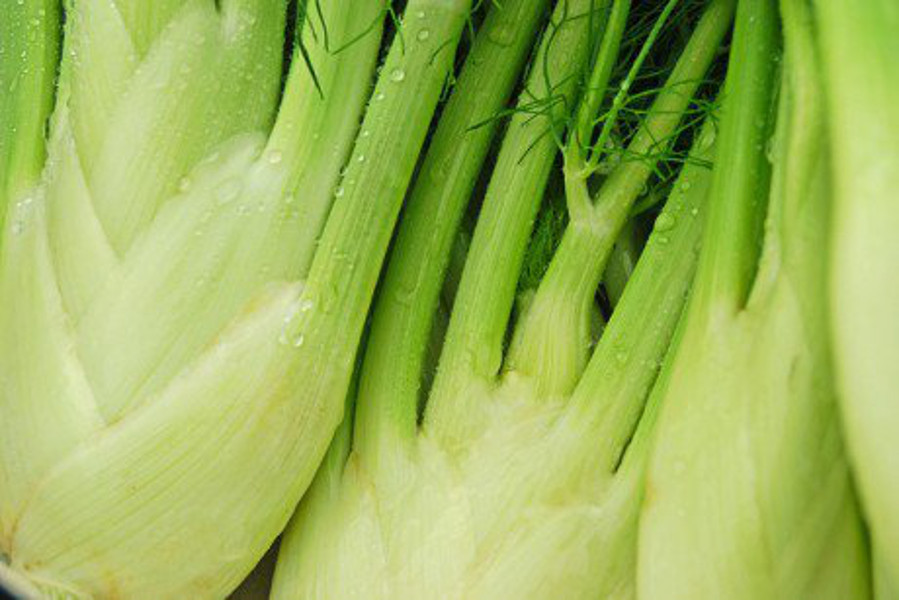 Fennel is a member of the carrot family. You can use pretty much the whole thing (it also has stalks and leaves), but for most people the bulb is the main attraction. For a simple fennel side or snack, slice the bulb, brush it with olive oil, sprinkle with salt and nutritional yeast and bake at 350 degrees until tender (about 20 minutes depending on how thin you slice it.) This recipe for fennel pies makes a great lunch on the go. Other fennel favorites include this Warm Fennel and Pomegranate Salad, this Beet, Fennel, and Lime Vegan Pate, and these Roasted Balsamic Beet, Sausage and Lentil Bowls. 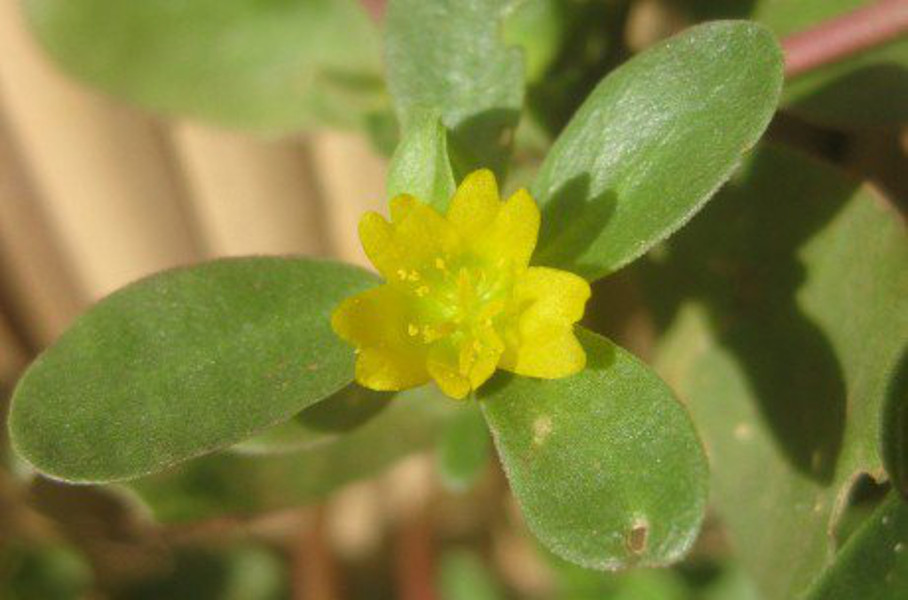 I can’t really say I had never seen Purslane before it showed up with my weekly delivery.  I had seen it in my front yard, growing around my sidewalk. Yes, it’s an edible weed (although I’ve never eaten the purslane from my yard.) While that may not sound too appetizing, it’s actually really good and full of omega-3 fatty acids. It tastes a bit like watercress or spinach, but also slightly peppery and at times a bit lemony. Take a handful and throw it into your favorite smoothie or try This Quinoa Salad with Figs, Purslane and Goji Berries the next time you are looking for something interesting to serve to guests. 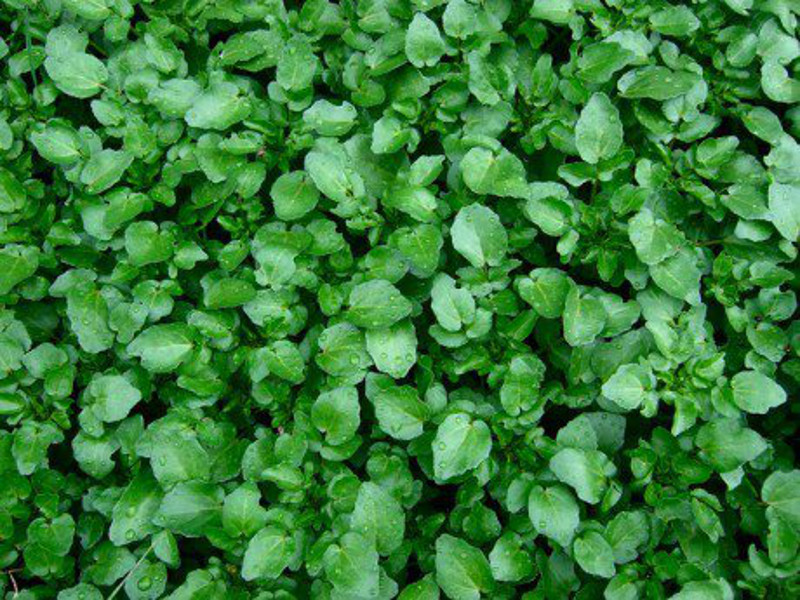 Watercress gets its name from where it grows naturally – in water. It looks a bit like cilantro or parsley, but with slightly larger leaves. It boasts many health benefits including high levels of vitamins C and K, and was originally used to treat bruising and cold symptoms like cough and runny noses. Its anti-inflammatory properties were used in treating arthritis and gout, and it is also a diuretic used to treat water retention. It has been called a superfood, and according to Life Extension Magazine, it may even contain anti-cancer properties!

It can be used in smoothies, but lends a bit of a spicy, almost bitter flavor. Try this Watercress Soup, or for a more filling meal, this Heart Shaped Beet Gnocchi with Watercress Pesto. 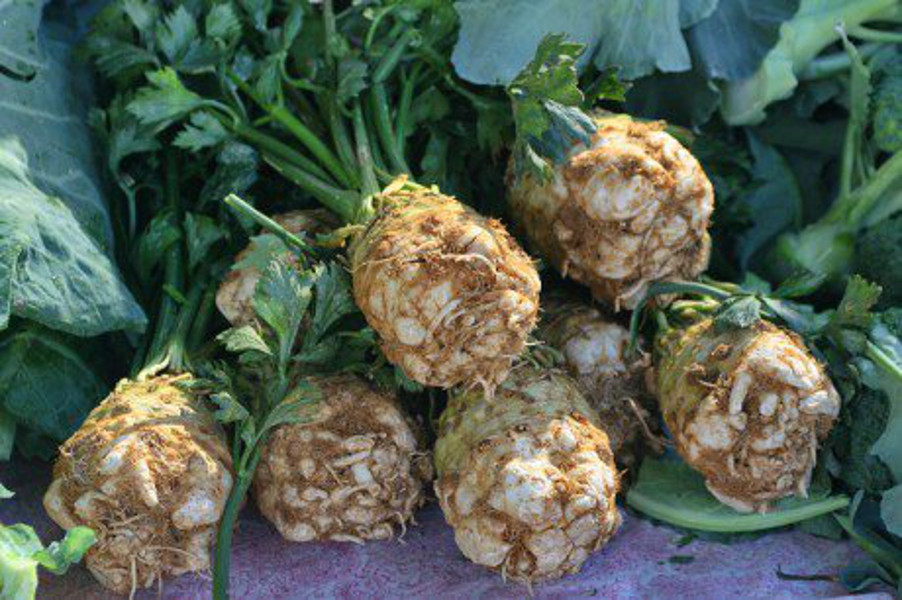 Celeriac, as the name suggests, is part of the celery family. It looks very much like celery as well, but unlike celery, only the root is used in cooking. It also tastes similar to celery, but the white flesh is also a bit bland.

Celeriac is versatile and can be used much like you would use a potato; you can roast it, use it in soups or juices, and make fries with it. 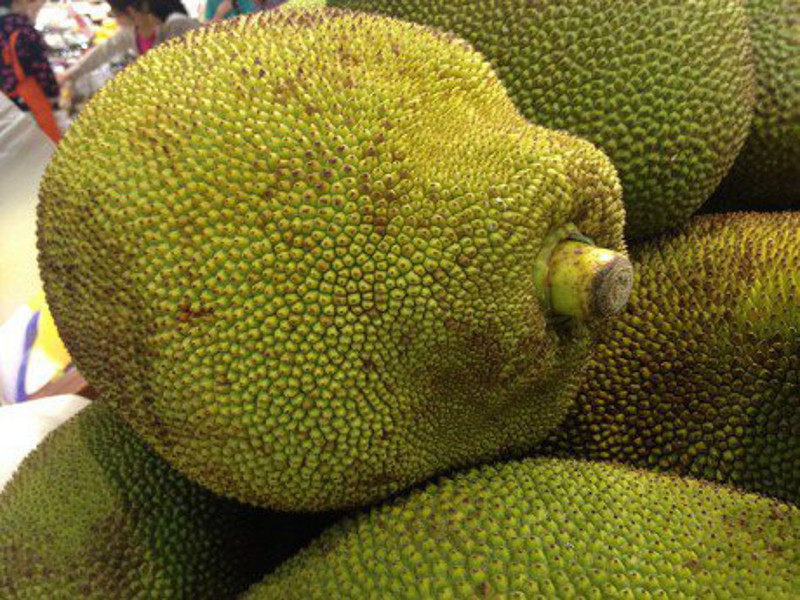 If you are lucky enough to receive jackfruit in your co-op box, it may just be the only thing in the box. They grow surprisingly large and heavy, and can even be a few feet long! You may be more likely to find it at a local co-op that you can visit, or a grocery store that carries unusual fruits and vegetables.

The most surprising thing about this fruit is the flavor it takes on while it is cooked. Because of this amazing capability, many people decide to cook jackfruit by marinated it in spices and barbecue-flavored sauces. Cooked like this, it can be mistaken by even the most hardcore of meat-eaters as pulled pork!  Additionally, its size and versatility makes it easy to get a lot of bang for your buck.

Jackfruit is commonly used in recipes like this one for BBQ Jackfruit, but it is also a great substitute in many meals that traditionally call for meat like this Jackfruit Pot Pie. If you are still looking for more ways to use jackfruit, try one of these great recipes. 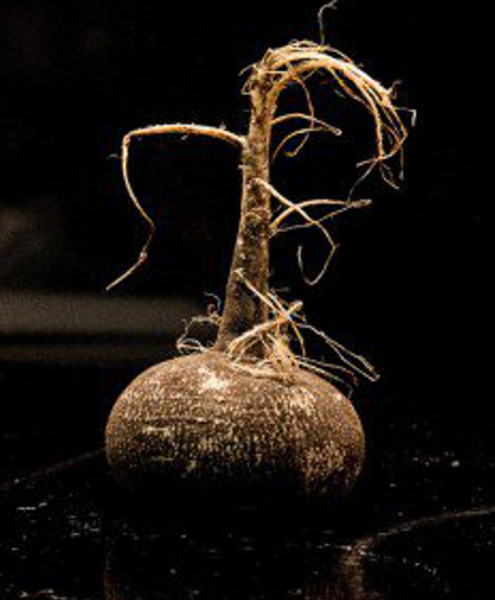 Black Radishes are just what their name suggests, but most people are unaware of what they are when they see them. They are darker, and usually larger than the more commonly known pink or purple ones, and their flavor is typically stronger and more bitter. Their flesh can also be firmer making them a bit more difficult to work with.

They can be used in the same ways you would use a traditional radish. They can be used in salads, pickled, and cooked with other root veggies. If you are a newbie to radishes, check out Radishes 101: How to Make the Most of These Delicious Spring Vegetables.

Co-ops are a great opportunity to introduce some new foods into your kitchen and make them less intimidating. Have you made an unusual discovery in your co-op box? We’d love to hear about it and what you are using it for!