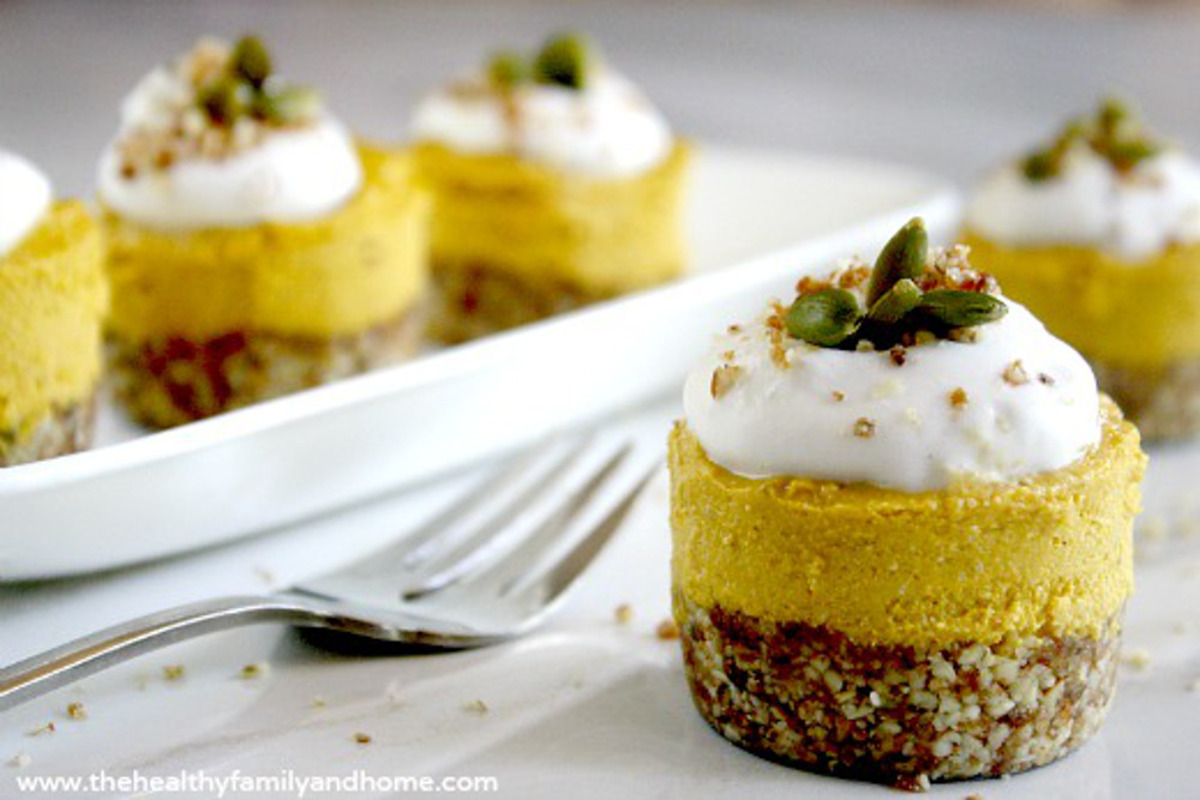 Pumpkin spice can be used in all sorts of recipes, not just coffee though you can learn How to Make Your Own Pumpkin Spice Latte Without Nasty Ingredients. You can also add it to your oatmeal, muffins, cookies, breads, and cakes. And of course, pies. See How To Make a Gluten-Free, No Bake, Low Sugar Mini Vegan Pumpkin Pie. Use it to spice up nuts, whipped cream, yogurt, and roasted fall vegetables like sweet potatoes, carrots, squash and Brussels sprouts. Mix pumpkin pie spice with sugar to make a streusel topping.

So in this season of celebrating all things pumpkin, let’s take a moment to celebrate, not just pumpkin pies and pumpkin cheesecakes (though we will celebrate those too) but also pumpkin spice. Read How To Make a Gluten-Free, No Bake, Low Sugar Mini Vegan Pumpkin Pie. Then check out these 12 recipes will help us savor pumpkin pies and cheesecakes as well as the flavor and aroma of the spice blend that is the epitome of autumn. 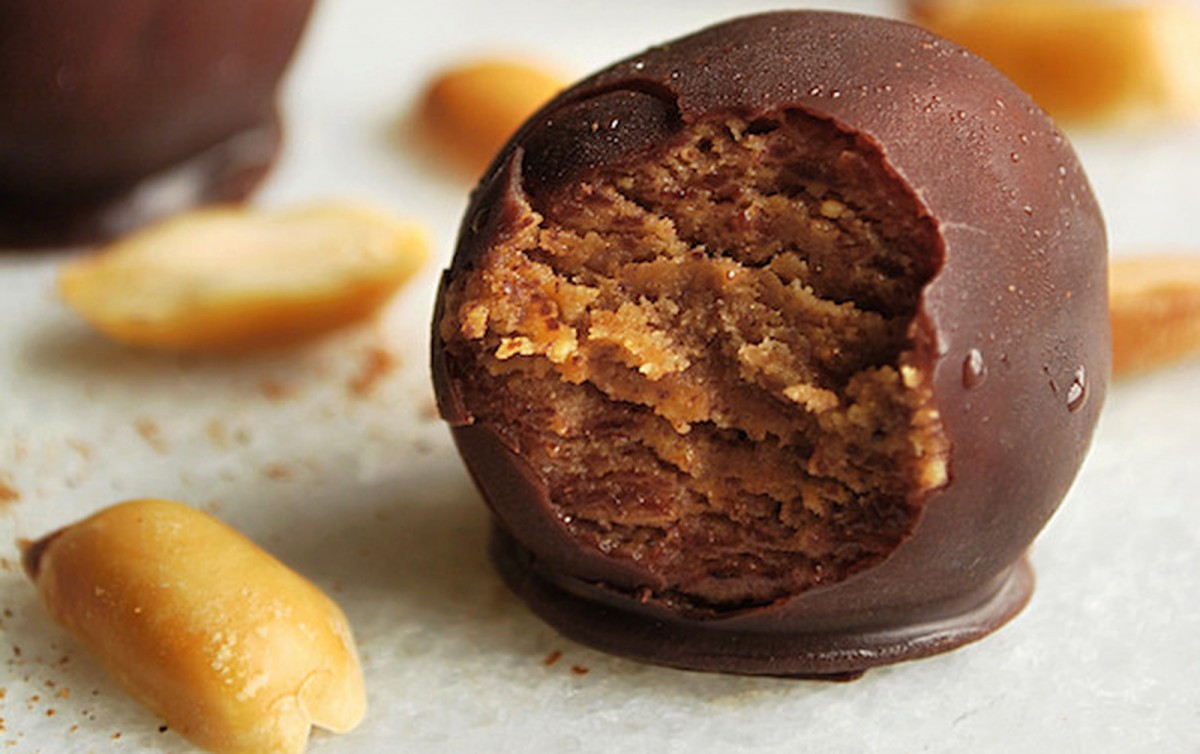 It’s official: the only way to make peanut butter any better is to add some pumpkin spice. Taking a bite out of these Pumpkin Peanut Butter Truffles is like taking a bite out of the best orange-leaved, scarf-wearing fall day you’ve ever had. Warming cinnamon, nutmeg, and cloves. Rich, creamy peanut butter. Cozy maple syrup. Homemade pumpkin-kissed chocolate. Oh, and they totally melt in your mouth. 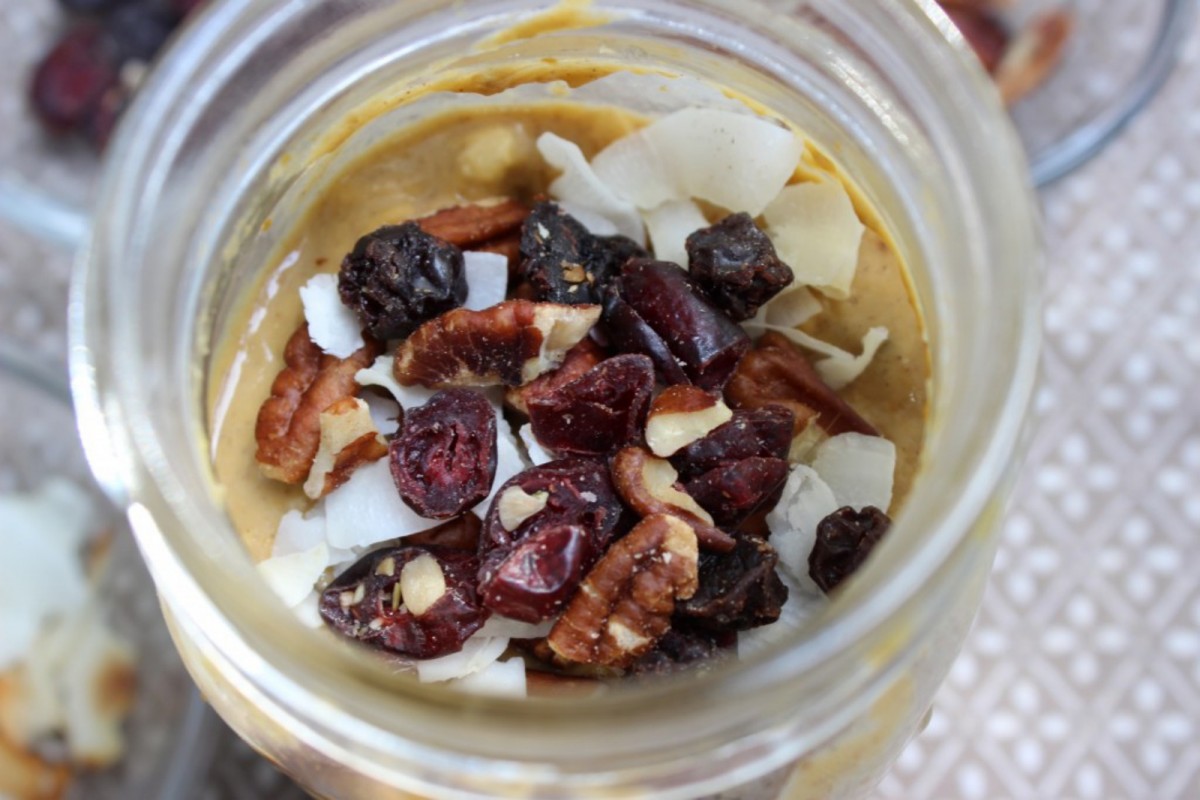 Vegan Pumpkin Pie Overnight Oats are a great way to start your day. Bananas, pumpkin, pumpkin butter, and oats are seasoned with all the spices of fall – cinnamon, nutmeg, cloves, and ginger. It’s part nutritious powerhouse, part decadent dessert – what could be better than that? 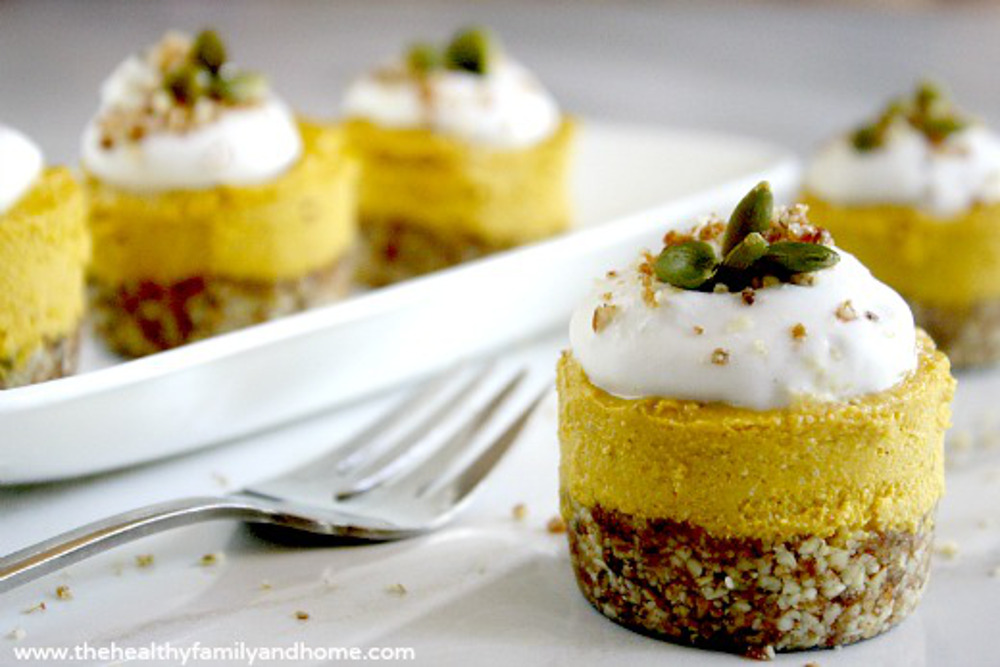 These healthy Raw Vegan Pumpkin Mini Cheesecakes will be a sure winner this fall because not only are they a guilt-free dessert, but one that everyone in the family will surely enjoy. The crust is made from nuts and dates and the filling has pumpkin, cashews and all the spices that sing autumn. 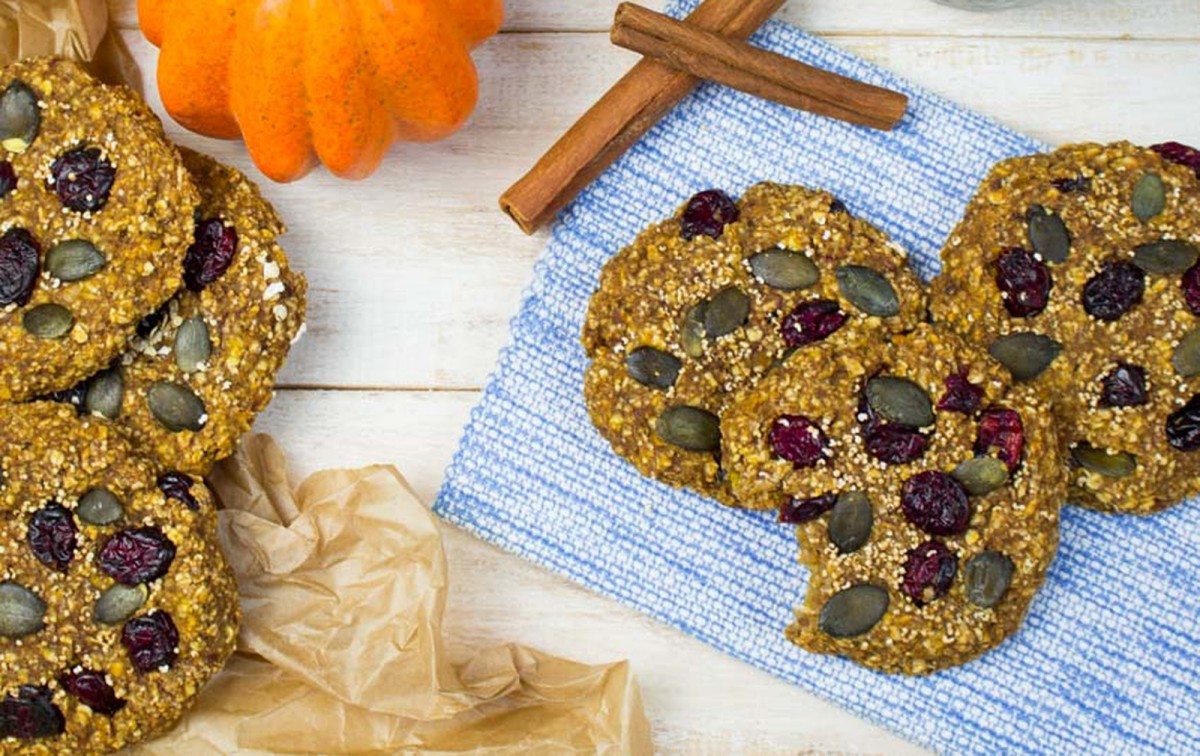 Not only are these Pumpkin Spice Breakfast Cookies delicious and good for you, they’re also incredibly easy to make! They come together in one bowl and you’ll have warm, pumpkin-y cookies ready in less than 30 minutes. This is the perfect excuse to eat cookies for breakfast more often! 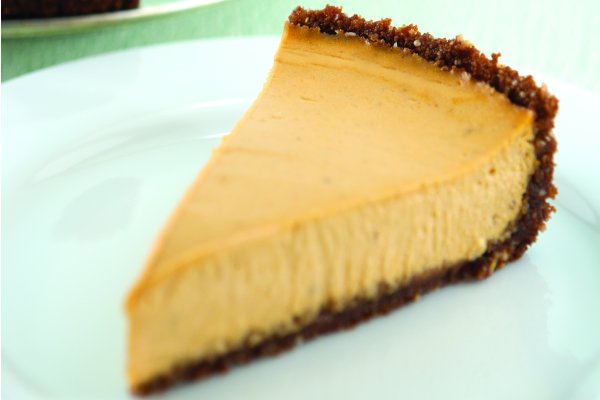 The best thing about fall just may be this Pumpkin Cheesecake! The crust is so gingery and snappy and the filling is so good, you can eat it on its own. Of course, you can serve this at any holiday gathering with pride. It will give you an opportunity to be social and explain to your friends and family why you don’t need cheese in cheesecake. 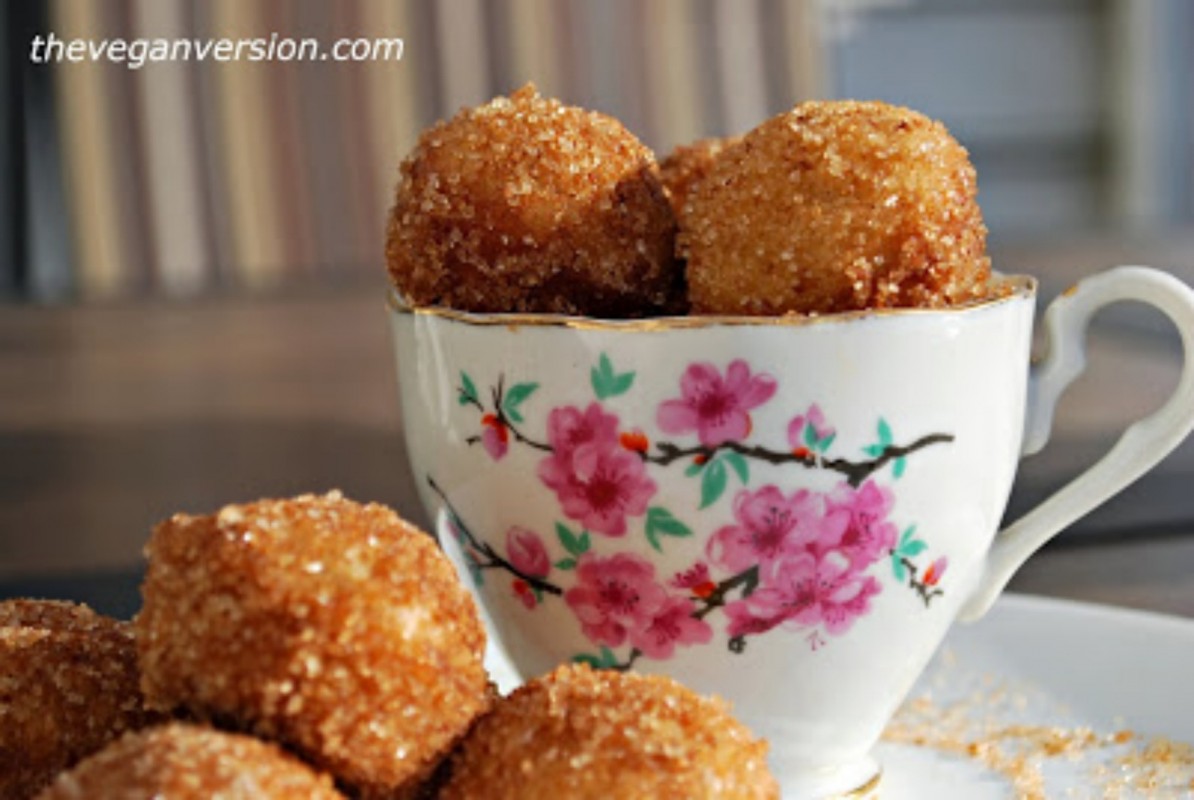 Get ready for a double dose of pumpkin spice. These Pumpkin Spice Doughnut Holes have warm pumpkin pie spices plus pumpkin spice-flavored coconut milk. These are like having pumpkin pie wrapped into a little dough ball. Yum! 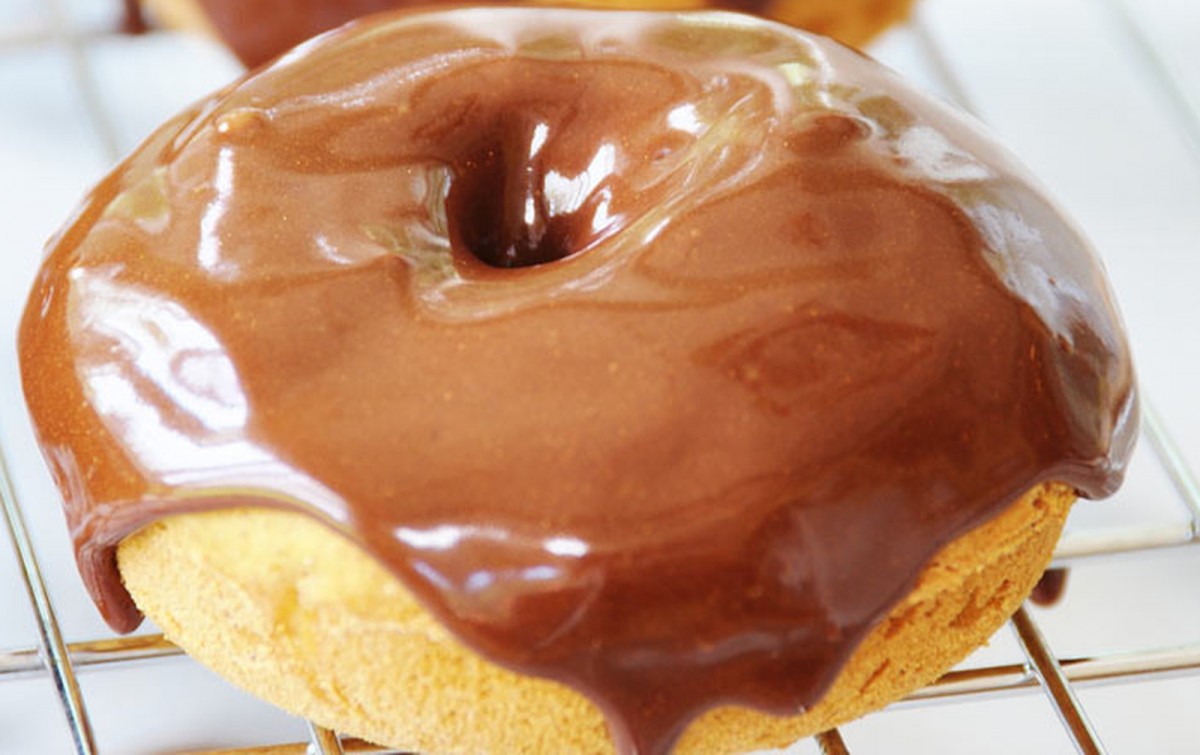 When you taste these vegan Baked Pumpkin Spice Doughnuts, you’ll understand how amazing they are. First, the doughnut: it’s exactly what a doughnut should be – firm, a little spongy, cake-like, and moist. And if the pumpkin spice flavors aren’t enough to make you swoon, there’s the dark chocolate and cinnamon icing that covers the top and drips down the sides. Pure pumpkin chocolate heaven! 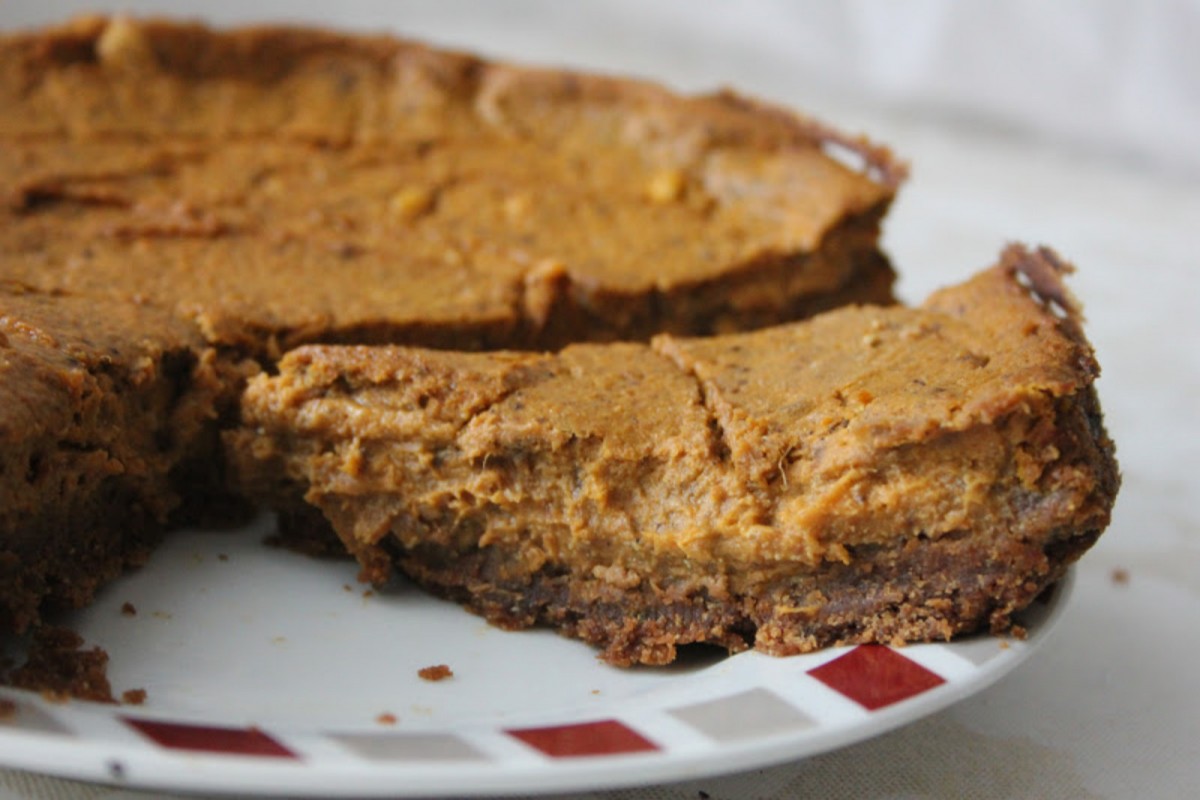 This Pumpkin Pie with Speculoos Crust takes tofu, pumpkin, and pumpkin spices and brings them together to form a deeply satisfying creamy texture, along with autumny flavors and color. The crust is made from speculoos biscuits for a crispy contrasting texture. 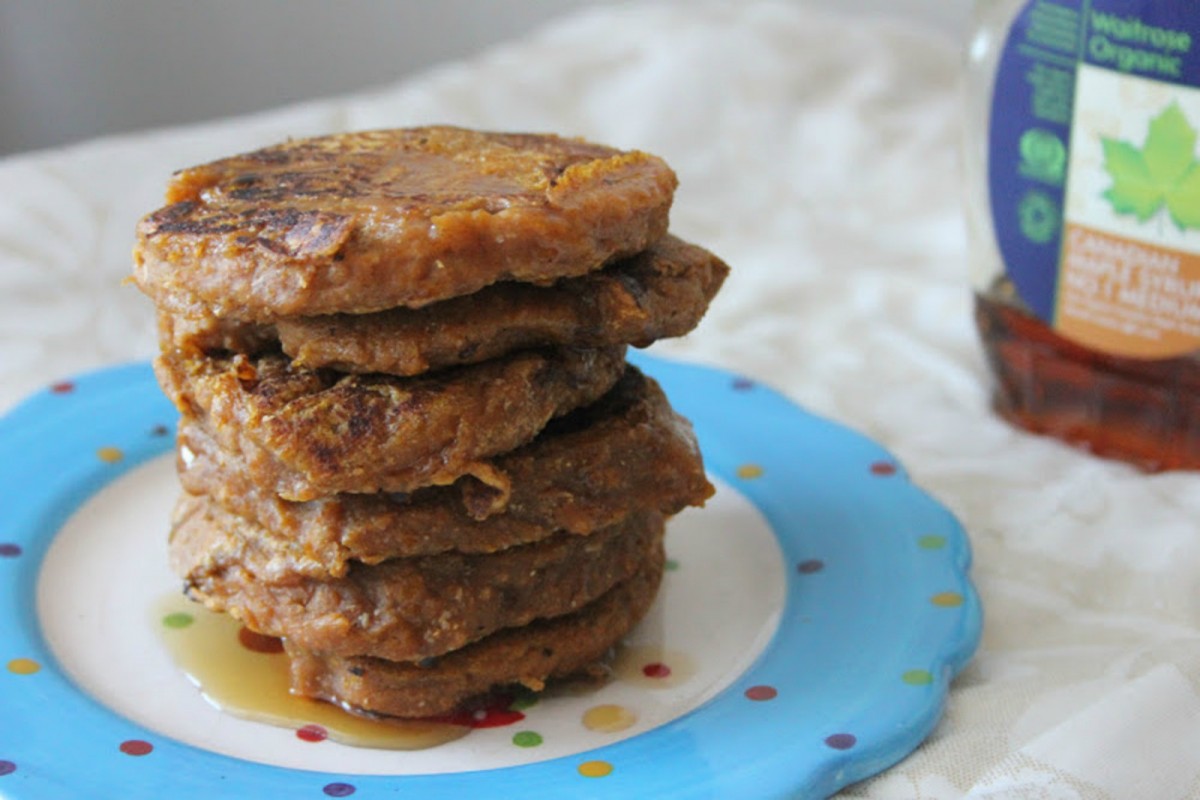 Pumpkin pie for breakfast? You bet. These Pumpkin Pie Pancakes are reminiscent of that classic autumn pie, using pumpkin puree and warm, fragrant pumpkin spices. The aroma alone will get you out of bed and the taste will make you stick around for seconds.

10. A Pumpkin Pie Recipe EVERYONE Will Love 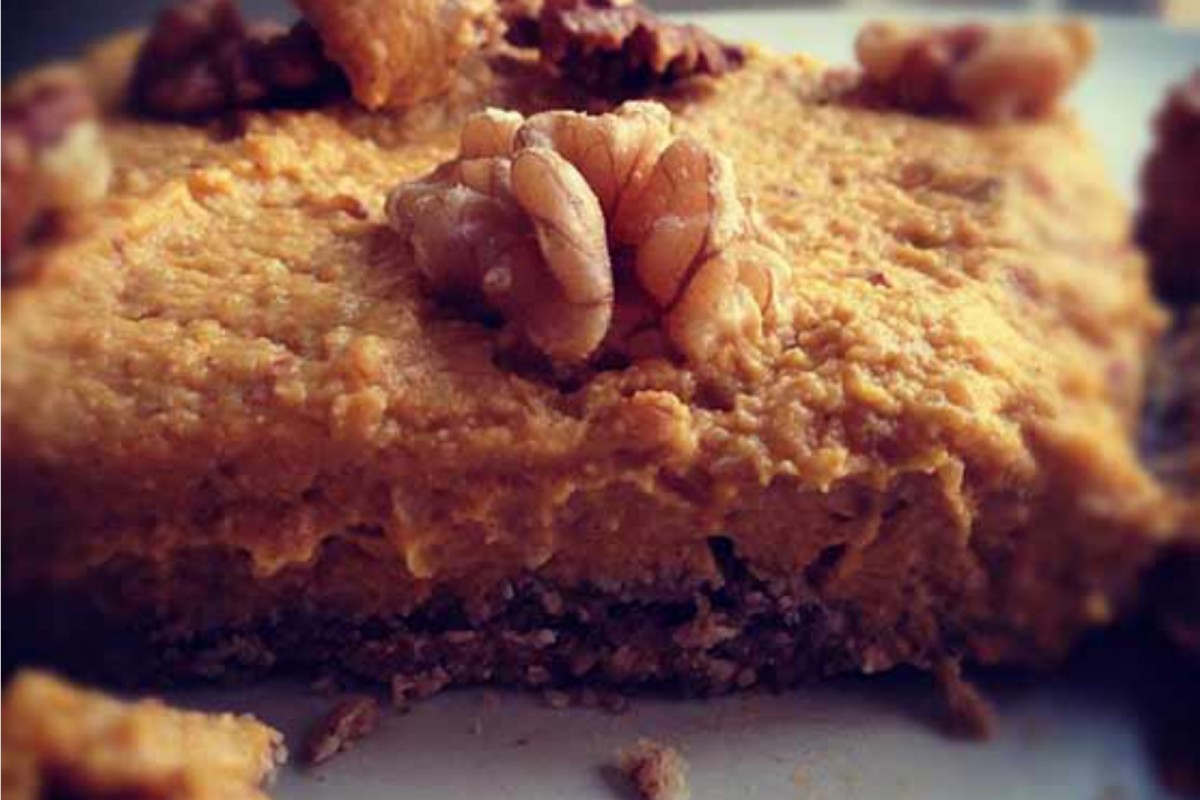 It’s fall and that means it’s pumpkin season. This is a simple Pumpkin Pie Recipe that everyone will love! The crust is made from nuts, oats, and flax. The filling is made with pumpkin, banana, coconut, and nuts. It’s creamy, delicious and we guarantee everyone will love it! 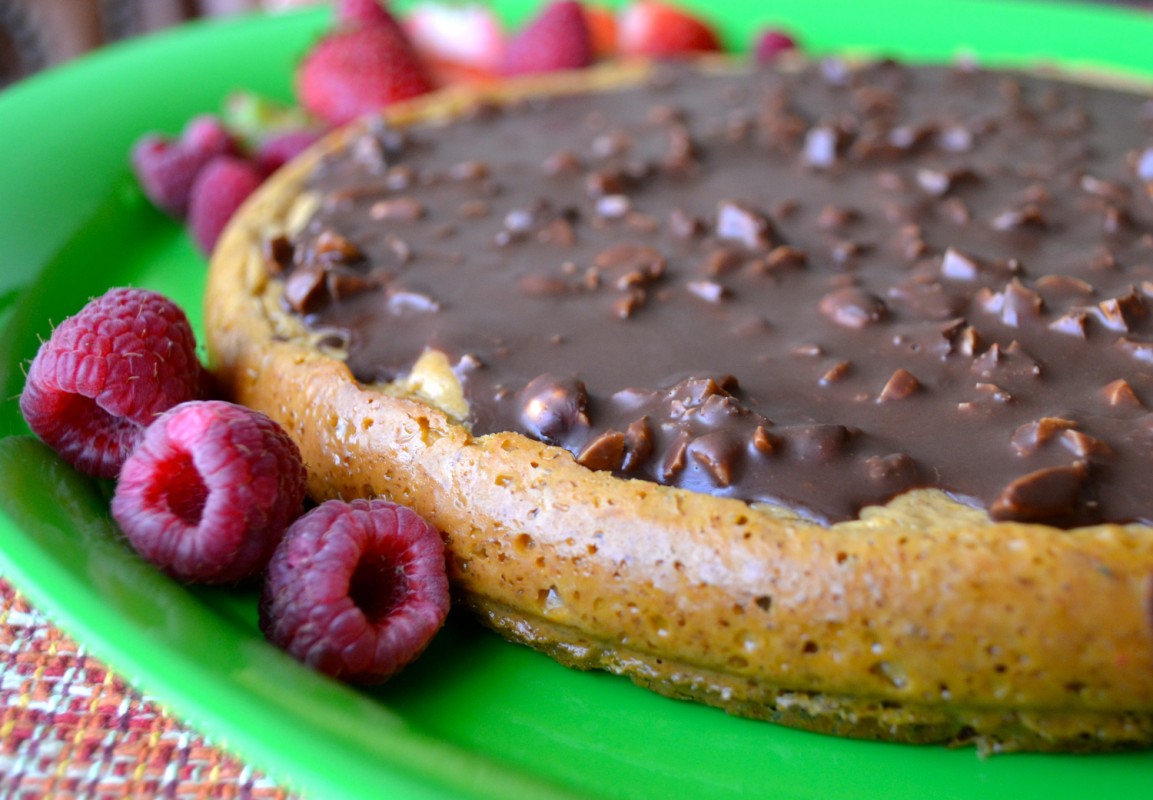 This Hazelnut Pumpkin Cheesecake is a mishmash of several cheesecake recipes because there’s so many ways to enjoy cheesecake, it only makes sense to put everything together. It has a sweet tofu ricotta and the chocolate hazelnut topping will be a big hit with kids, young and old. 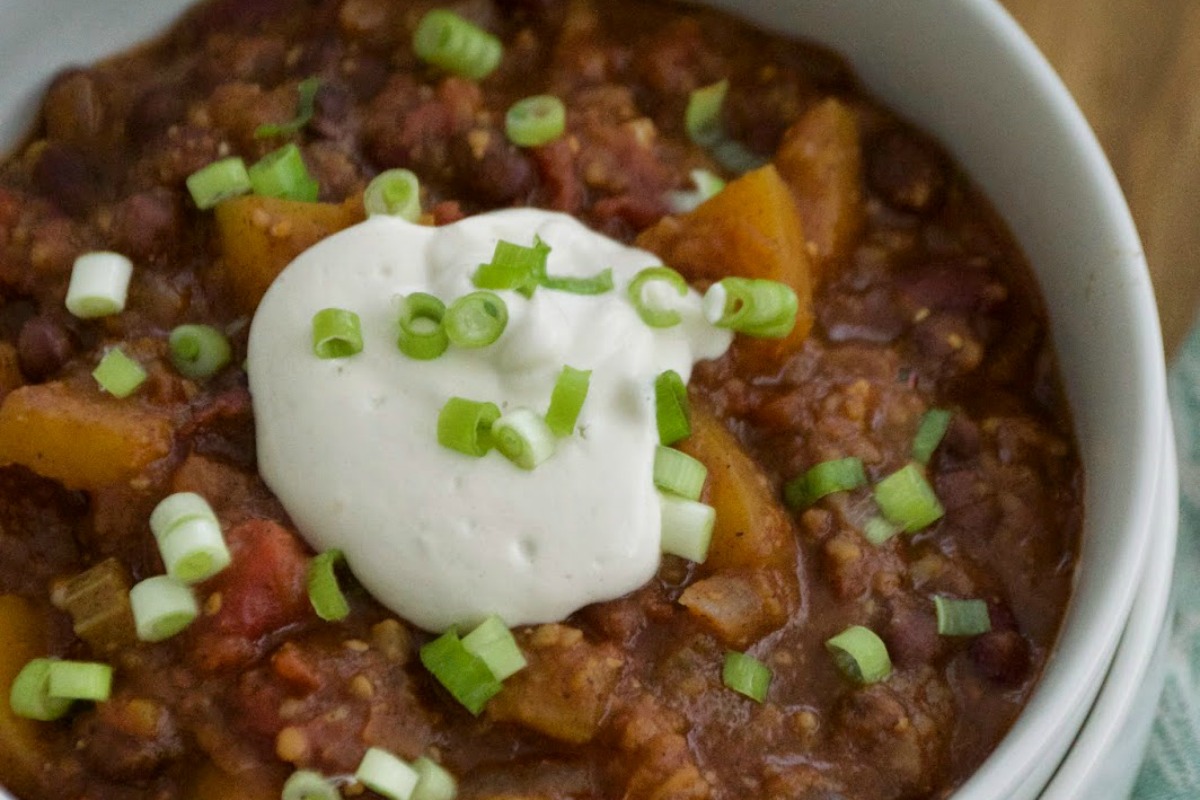 Pumpkin spices can be used in savory recipes too. This Sweet and Spicy Pumpkin Chili not only has pumpkin, but it has cinnamon, cloves, and allspice. Add lots of veggies and some cayenne and you have a filling, hearty meal. Top with homemade cashew sour cream.

Pumpkin pie, pumpkin cheesecake, and pumpkin spices – three delicious reasons to celebrate! Whip up a batch of pumpkin spice blend and add it to everything this fall.