You’ve most likely heard about the condition, maybe even experienced it yourself, yet how much do we really know about the seemingly mystical condition that is restless leg syndrome?

Characterized by the uncontrollable urge to move your legs — inspired by a nervous crawling feeling — this condition is incredibly common and yet widely misunderstood.

The National Institute of Neurological Disorders and Stroke found that 10 percent of Americans are affected by the condition and “80 percent of people with RLS have a related condition called periodic limb movement of sleep (PLMS).” This related condition adds yet another horrible layer to the situation as it causes the “legs to twitch or jerk during sleep,” oftentimes occurring “every 15 to 40 seconds and can continue all night long.”

As you can see, these conditions are hard-hitting, especially for sleep. Plus, RLS and PLMS aren’t one-hit-wonder neurological conditions. They can last an entire lifetime!

Yet, it’s not all trouble and turmoil!

While there are medicines developed specifically for RLS and PLMS, all you may need are a few simple lifestyle and dietary changes. For one, it’s been discovered that certain nutritional deficiencies may be an underlying cause of the condition.

What is Restless Leg Syndrome?

Ever had that creepy-crawly just can’t stop moving feeling in your legs? You’ve probably experienced some form of restless leg syndrome (RLS).

Also called Willis-Ekbom disease, restless leg syndrome (RLS) is a neurological condition “that causes an uncontrollable urge to move your legs, usually because of an uncomfortable sensation.” While RLS can happen pretty much at any time, it “typically happens in the evening or nighttime hours when you’re sitting or lying down.”

While this may sound annoying, RLS can be severely debilitating interfering with “sleep, causing daytime sleepiness and fatigue,” which have been shown to lead to “health problems, including depression if not treated.”

Even though RLS is characterized specifically by the almost uncontrollable urge to move your legs, this condition can also be accompanied by other symptoms.

First and foremost, the sensations of RLS “begin after you’ve been lying down or sitting for an extended time, such as in a car, airplane, or movie theater.” This is one of the large reasons RLS is so severe at nighttime, yet this can also be indicative of an associated condition called periodic limb movement of sleep that “causes your legs to twitch and kick, possibly through the night, while you sleep.” Another telltale symptom of RLS is relief of the sensation with movement “such as stretching, jiggling our legs, pacing or walking.”

Oftentimes, RLS is described as crawling, creeping, pulling, throbbing, aching, itching, or even an electric feeling.

Wonder why I’ve referred to restless leg syndrome as a mystery? Well, because when it comes to diagnosing what caused or is causing the condition, many doctors come up blank. With that said, there are a few triggers such as a genetic predisposition, an environmental trigger, or, most recently discovered, a nutritional deficiency link.

When it comes to genetics, it’s been found that “more than 40 percent of people with RLS have some family history of the condition” and there are actually “five gene variants associated with RLS.” Environmental triggers that may intensify or cause an onset of symptoms include caffeine and alcohol, as well as certain medications that are used to treat “allergies, nausea, depression, and psychosis.” Another possible cause could be other health conditions such as “neuropathy, diabetes, or kidney failure.” There is also a connection found between RLS occurrence and low levels of iron in the brain, as well as a possible “disruption in the dopamine pathways in the brain.”

Unfortunately, these are simply theories that help doctors find the right treatment that may lessen the symptoms of RLS, but no cure has been found.

When it comes to RLS and nutritional deficiencies, researchers have found a connection between the condition and low levels of iron and vitamin D.

An analysis put together for the Frontiers in Aging Neuroscience entitled Restless Legs Syndrome: From Pathophysiology to Clinical Diagnosis and Management outlined several studies that have shown how “iron supplements can help ease RLS symptoms.” Specifically, it was discovered that “low serum iron levels … presented in 25 [percent] of patients with severe RLS” and “43 [percent] of patients complaining of ‘leg restless’ were found to be in the condition of iron deficiency.”

The real kicker when it comes to diagnosing low iron levels in connection with RLS is that oftentimes you can have a normal range of iron in your blood tests and still have a deficiency. This is because the “brain does not respond to peripheral variations in iron status.”

Along with iron, vitamin D deficiency has also been “linked with RLS” per a study conducted in 2014. The study performed by the Sleep Medicine and Research Center in King Abdulaziz University published their results in a paper entitled The effect of vitamin D supplements on the severity of restless legs syndrome. The conclusion of the study found that “vitamin D supplementation improves the severity of RLS symptoms” and sums up that “vitamin D deficiency is conceivably associated with RLS.”

In short, while research is still fresh on the subject, the connection between nutrition and restless leg syndrome is an avenue that should be explored when seeking aid. 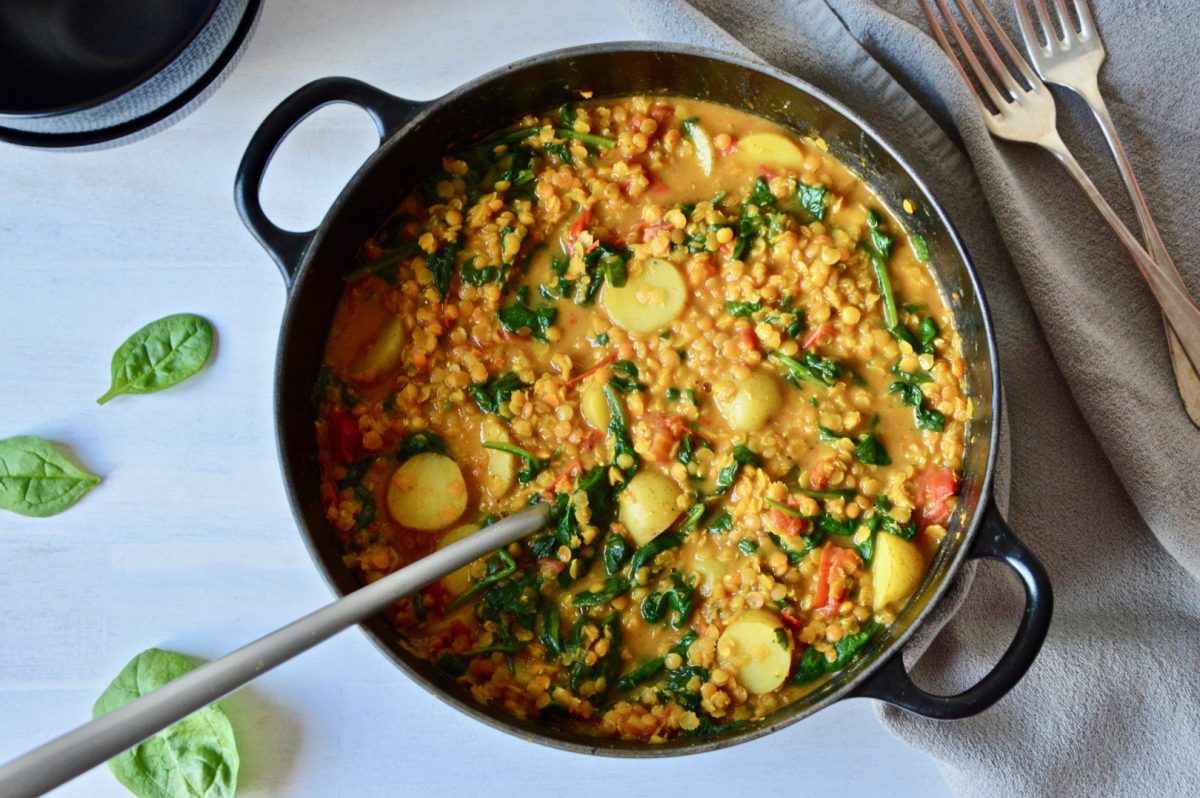 Alright, you’ve spoken with your doctor about the potential that your RLS may be caused by a deficiency in either iron or vitamin D. Now, it’s time to get that vitamin boosted in diet! First off, it’s important to note that there are two types of iron — heme, which is sourced from animal products, and non-heme, which comes from plant-based foods. While non-heme is a bit harder for the body to absorb on its own, most plant-based foods also contain other vitamins and minerals that boost iron absorption, such as vitamin C. 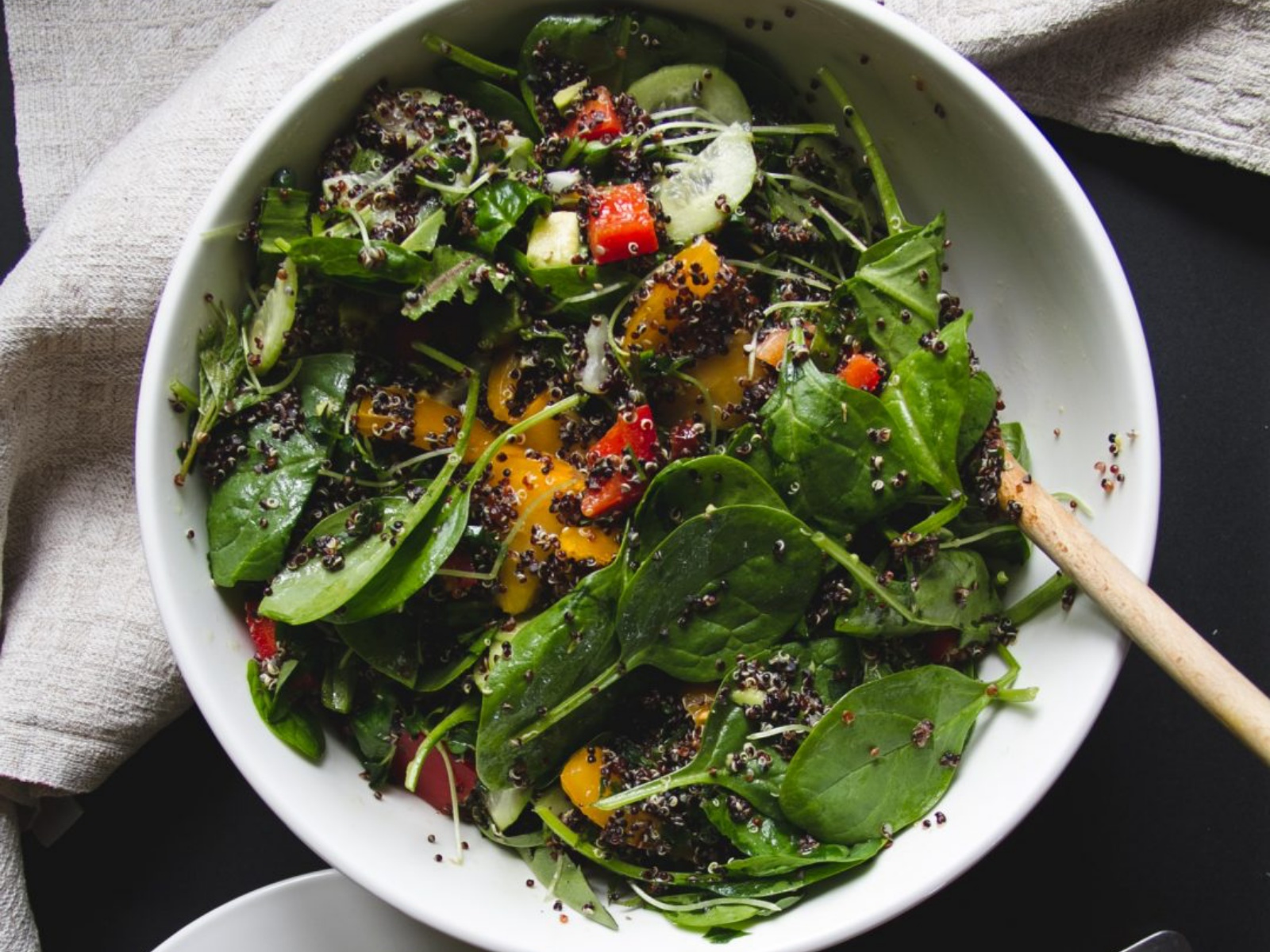 Spinach happens to be one of those amazing plant-based foods that are not only incredibly versatile but also neutral-flavored meaning it’s super easy to add to your diet. Plus, spinach is one of the best plant-based sources of iron — “100 grams of raw spinach contain 2.7 mg of iron, or 15% of the DV [daily value].” Spinach not only has iron, but it’s also a rich source of vitamin C, which means you’re body can absorb all the goods! 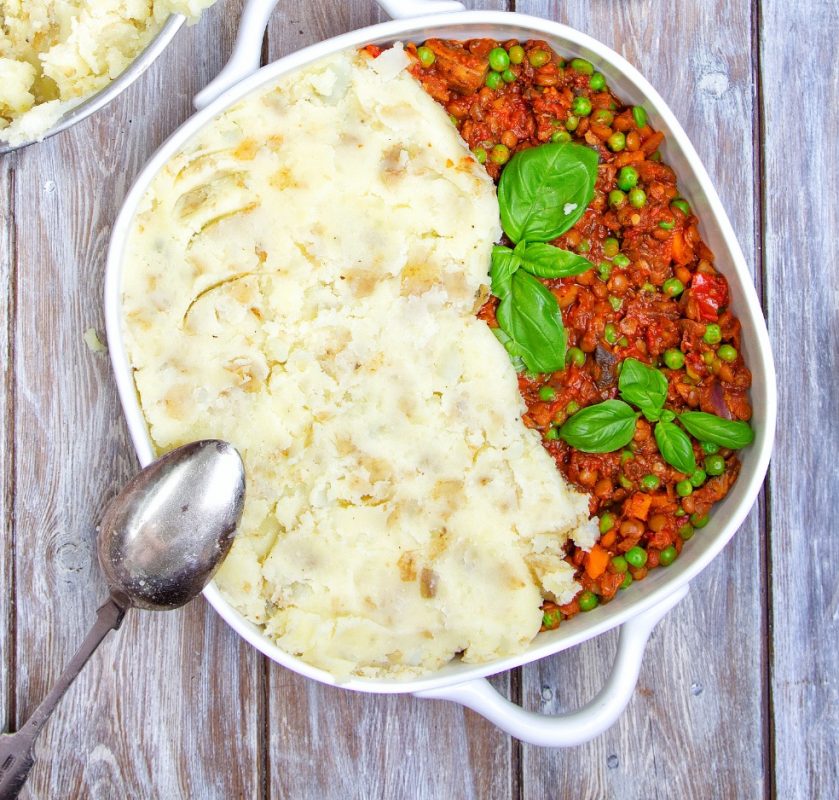 Another plant-based staple, lentils are loaded with iron, folate, magnesium, and potassium. For instance, “one cup (198 grams) of cooked lentils contains 6.6 mg, which is 37% of the DV.” Lentils are commonplace in a plant-based kitchen as they’re a great ingredient for meatless recipes such as vegan patties, meatloaf, and even meatballs. With that said, to get the most absorption of iron from lentils, make sure to match your lentil recipe with “foods high in vitamin C, such as tomatoes, greens, or citrus fruits.” 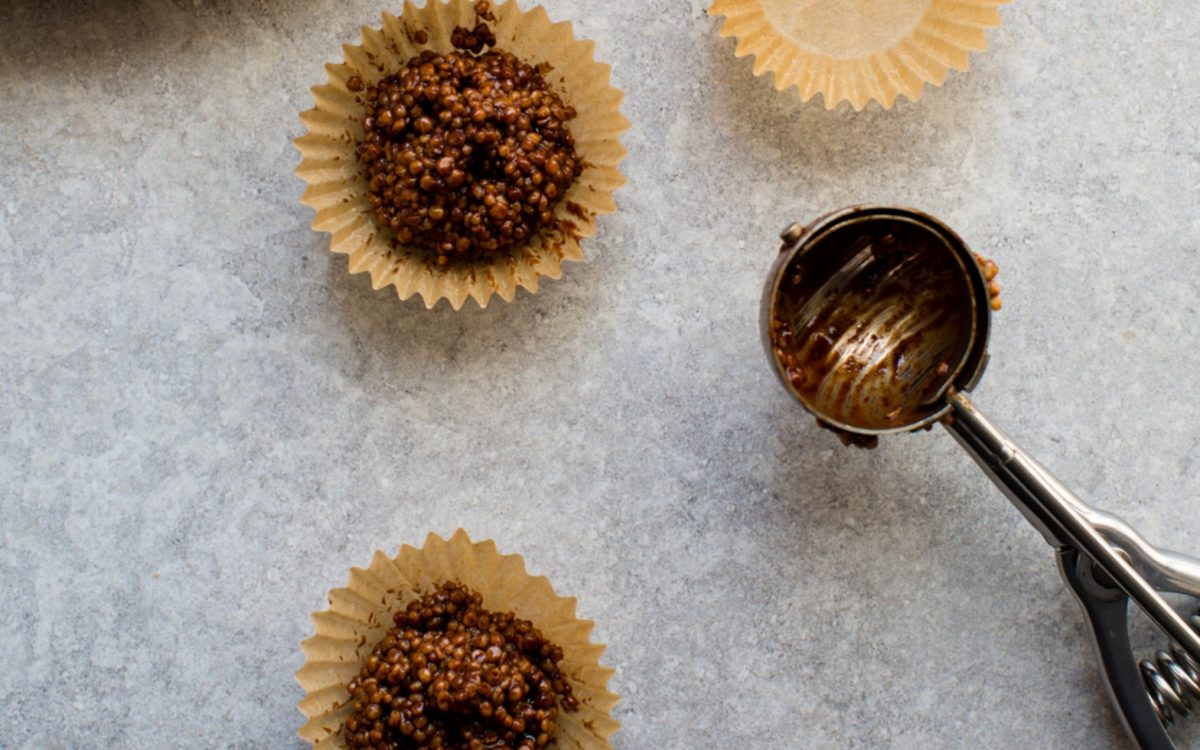 It may seem that quinoa ends up on almost every plant-based nutrition-rich food list and that’s for good reason! Quinoa is an ancient food, commonly mistaken for a grain, but it’s actually a seed. This means that quinoa is not only incredibly nutrient-rich, but it’s also gluten-free! When it comes to iron, one cup of cooked quinoa “provides 2.8 mg of iron, which is 16% of the DV.” Plus, you’ll also get a powerful dose of protein, folate, magnesium, manganese, copper, and fiber.

While I’d love to say that vitamin D is also incredibly easy to source naturally from plant-based foods, it’s not. Pretty much the only food that offers a natural source of vitamin D are mushrooms and while these are a wonderful ingredient, slipping mushrooms into every meal every day may be a challenge. You can also turn to fortified cereals and plant-based milk options, which oftentimes include doses of vitamin D. Yet if you’re looking to up that vitamin D intake, you may want to look into supplements! 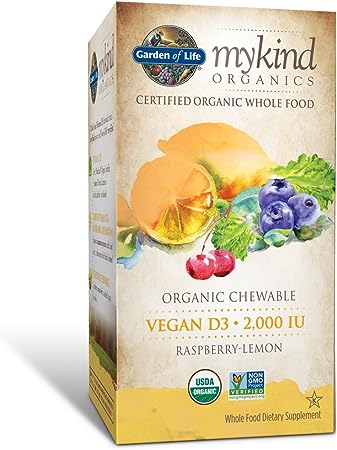 Garden of Life is a highly trusted supplement brand due to their passion for offering non-GMO, USDA certified organic, and vegan-friendly supplements. This Garden of Life Vegan Organic Vitamin D3 supplement follows all the same strict quality guidelines sourcing its vitamin D from vegan-certified lichen and 10 organic mushrooms. Plus, this supplement offers a lovely organic raspberry lemon flavor without the unwanted added sweeteners such as sugar or stevia. A 30-tablet bottle costs $11.96. 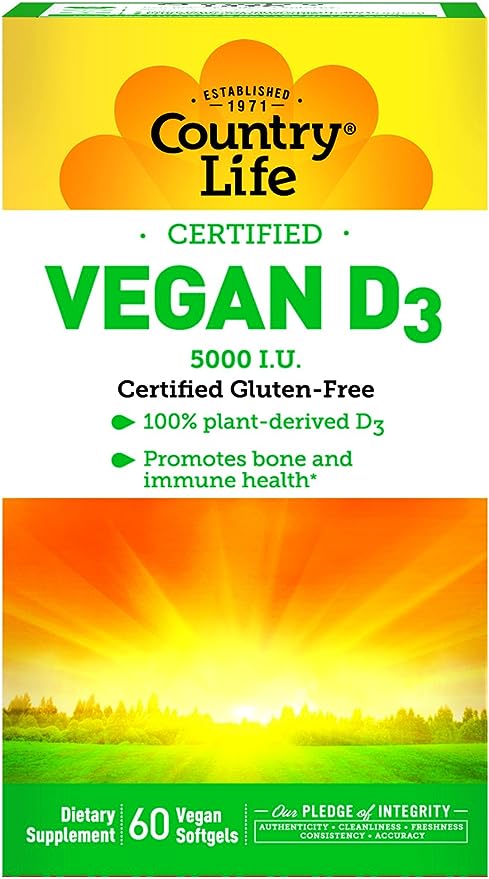 Looking for a bit more bang for your buck? This Country Life Vegan D3 supplement is not only AVA certified vegan and 100 percent plant-derived, but it also sources the recommended form of vitamin D, cholecalciferol, which is the type of vitamin D that the body naturally makes from sunlight. For a 60-capsule bottle, you’ll shell out only $21.55. 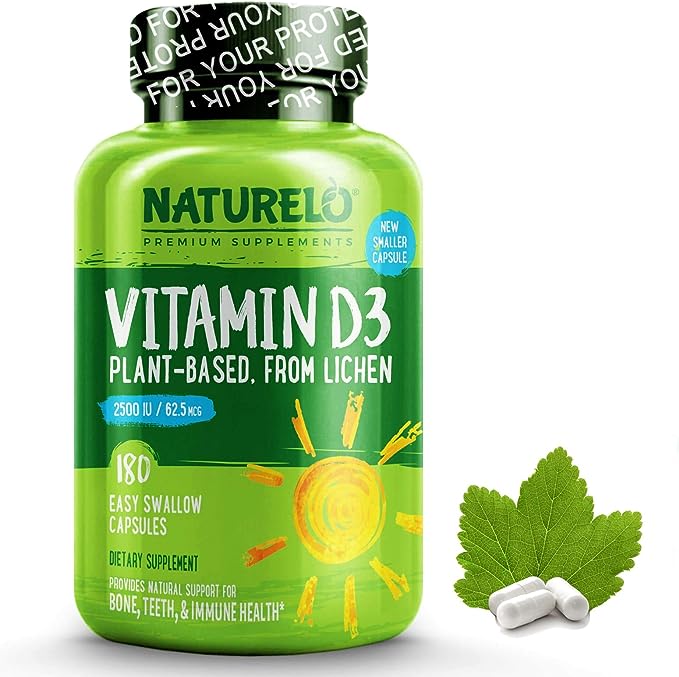 If you’re in it for the long haul, you may want to try NATURELO vitamin D supplements. One bottle generally contains a whopping 180 capsules! Plus, they follow many of the same strict quality guidelines as the other two brands. This NATURELO Vitamin D supplement is vegan-friendly, 100 percent plant-based from wild-harvested lichen, nong-GMO, and is free of gluten, soy, dairy, corn, nuts, additives, preservatives, or coloring. For a 180-capsule bottle, you’ll be spending $21.95.