By Leif Cocks, Founder of The Orangutan Project 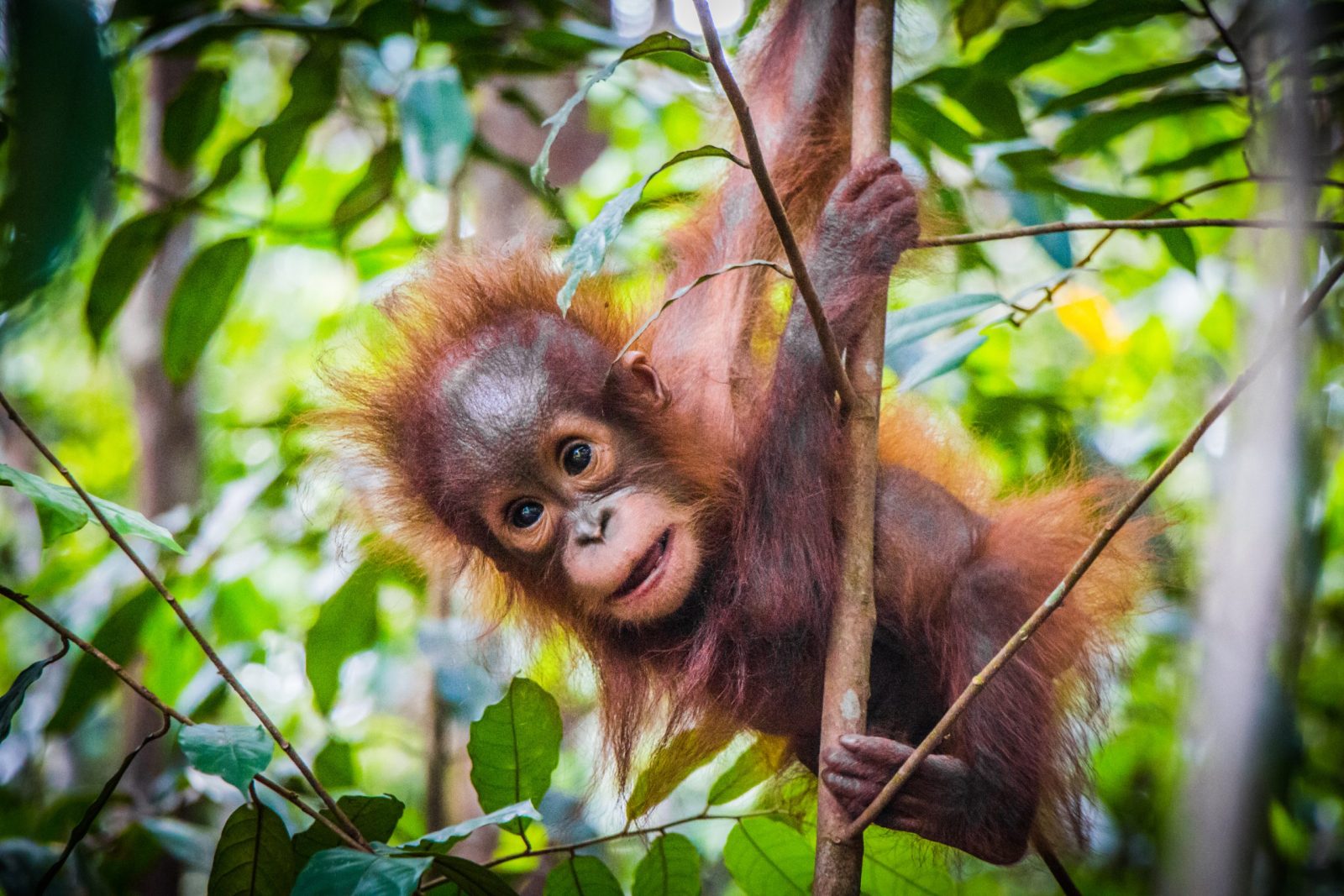 Baby orangutans are prized possessions on the illegal black market, where many other critically endangered species are trafficked. Aman is just one of many infant orangutans who were stolen from their mothers in the past couple of years, but his story highlights the extent of the illegal wildlife trade and the trauma that young orangutans suffer.

An infant orangutan cannot be taken from its mother without force. Mother orangutans will fight to the death to save their babies. To feed this insidious illegal trade, the mothers are almost certainly killed, often with machetes or guns. Not only are the infants traumatized and smuggled far from the forest, but the whole species is also robbed of future generations through the brutal murders of female orangutans.

Once captured by wildlife criminals, the babies are typically forced into boxes, crates, or even postage bags to be smuggled through or out of Indonesia, often to far-flung places like Thailand, the Middle East, Europe, or Singapore. Many also end up in small wooden cages, hidden away in homes across Indonesia. Owning a baby orangutan is seen as a status symbol, even though the practice is illegal in both Indonesia and Malaysia.

Regardless of where these highly intelligent beings end up, their freedom is gone forever unless they can be rescued. They are often fed the wrong food, are unable to climb or make nests in trees, and can become unwell and experience mental health issues. Some, like Aman, will carry the physical reminders of their early trauma for the rest of their lives.

Aman’s Story – From Trauma to Safety

Aman is missing the tops of his fingers on his left hand. His rescuers in Borneo believe his fingers were most likely hacked off while he clung to his mother as she was killed. It’s almost impossible to imagine what this young orangutan has been through in his short life: from being torn from his mother’s arms and experiencing her murder, to the pain of losing his fingers, to being shoved into a chicken coop and forced to look out at the world through wooden slats.

Aman was rescued in June 2020 by the Bornean Orangutan Rescue Alliance (BORA) from a family home in Berau in East Kalimantan, Borneo. The BKSDA (Nature and Conservation Agency) contacted the BORA rescue team to notify them about an illegally held orangutan, who they believed was about two years of age, and asked the team to help confiscate him.

The team immediately set to work and prepared an enclosure in their rescue center for the pending arrival at their vet clinic of the rescued orangutan. They loaded a transport cage into their vehicle, left early one morning, and traveled to the home in Berau, where they found the young orangutan peering up at them through the slats of a chicken coop. They learned he’d been fed mostly on bananas, water, and candy, and as soon as he was in their transportation crate, he was given leaves to rest on and fruit to eat. The confiscation and transport back to the rescue center went smoothly, although that is not always the case.

Within days of being rescued, the young orangutan was recovering, learning to eat leaves and twigs, and finding simple joy in his freedom. Soon after he arrived at the rescue center, the team at The Orangutan Project, one of the BORA partners, contacted a bequestor to ask for a new name for the young orangutan. The name Aman was chosen as it means ‘safe’ in Indonesian.

Nearly two years later, Aman still occasionally struggles to climb trees or open fruit, but he never gives up. Through the love and kindness of the orangutan carers, the good diet of fruit, leaves, twigs, and termites; and the opportunity to learn from older orangutans and carers how to climb trees, swing through the branches and build a nest, Aman is flourishing.

Jungle School was a new experience, but despite his missing fingertips, Aman is not daunted and is learning how to climb, swing through the trees, and forage for his food. He is a sweet, courageous young orangutan who gives everything a go. Aman’s story is a testament to the resilience of young orangutans who have been orphaned by the illegal wildlife trade, as long as they are one of the ‘lucky’ ones to be rescued from a life of captivity.

The Most Trafficked Great Ape

Orangutans are one of the most heavily trafficked critically endangered animals sold on the black market. International orangutan conservation organization, The Orangutan Project, estimates that only one in six orangutans are rescued. Of the hundreds that the organization and its partners care for, there are thousands more that have been killed.

Surprisingly, some baby orangutans are even bought and sold online through sites such as Facebook, Whatsapp, and Instagram. At a price tag of $1,000 or more, baby orangutans are highly prized within the illegal wildlife trade, which is also responsible for poaching tigers, elephants, pangolins, rhinos, and many more species.

As the forests of Borneo and Sumatra are destroyed, critically endangered species become more accessible to poachers. This, in turn, helps drive biodiversity loss throughout the remaining fragmented habitat. These dense, rich forests are healthiest when species like orangutans, elephants, and tigers are flourishing.

Less than Ten Years to Save the Orangutan

I believe, along with many other scientists and primatologists, that there are less than ten years to save orangutan populations from becoming too small, vulnerable, and fragmented to stop them from spiraling towards extinction. Without urgent action to safeguard the remaining rainforests of Indonesia, many species will die out. As forests are cut down for timber, mining, and unsustainable monocultures such as palm oil, pulp paper, or rubber trees, orangutans and other species become easier prey for wildlife traffickers.

There are still forests in Borneo and Sumatra. There are still orangutans, tigers, and elephants living wild and free in these forests. But without massive injections of funds to safeguard the remaining ecosystems, it won’t matter how many orangutans are rescued from the illegal wildlife trade. While being rescued matters to individuals like Aman, this highly sentient species will have no forest habitat to return to without intact ecosystems.

We might save individual orangutans, but if we don’t save the right size, type, and shape of the forest, orangutans will become extinct in the wild. In 10 years, we might still have some forest left but not enough to sustain orangutan populations. We might have some orangutans left, but their numbers will be too low to secure the future of the species. And zoo populations are too small and too problematic to provide meaningful help.

The most important act we can take now is to safeguard the remaining forests of Sumatra and Borneo. The Orangutan Project aims to protect eight key ecosystems across Borneo and Sumatra through legally binding agreements that put a stop to legal deforestation, unsustainable monocultures, and mining in those forests. At present, this world-renowned international organization has formed partnerships that have helped secure the future of two key ecosystems: the Bukit Tigapuluh Ecosystem in Sumatra and the Sebangau Ecosystem in Borneo.

Working with key partners in Borneo and Sumatra, The Orangutan Project is approaching the problem from all sides. To ensure these forests stay intact, they employ teams of wildlife rangers to patrol the ecosystems to reduce all illegal activities such as logging, hunting, and snares. Their teams work closely with local communities, supporting economic development projects that provide incentives for forest conservation.

They engage with and empower indigenous communities in Borneo and Sumatra, responding to their immediate, expressed needs and aspirations with projects that support strength, resilience, and education. The evidence is encouraging; everywhere these rangers patrol the forest and engage local communities, illegal activities reduce over time, and farmers, children, and villagers become protectors of the forest.

All these efforts – from rescuing and rehabilitating orangutans like Aman to patrolling vast tracts of forest and educating and empowering communities – require significant funds each year. Without funds from donors all over the world, such as Australia, the United States, Europe, and more, these activities would not be possible. Without support, many more orangutans would be poached and illegally traded, and the richly biodiverse forests of Sumatra and Borneo would not be protected.

Although actions now save orangutans like little Aman, these steps taken will also bear fruit in the future – in 10, 20, or more years. Some of us will not be alive to see the outcomes of our actions and support – but we know that if we are part of this solution, we are helping bring about long-term survival, not only of orangutans but also of tigers, elephants, rhinos and the local people who live in and near the forests.

Conservation is a Marathon, Not a Sprint

The Orangutan Project and its partners are in it for the long haul, with the hope that all orangutans like Aman will one day live wild and free in large, sustainable rainforests, safe from smugglers and deforestation.

You can support The Orangutan Project through monthly giving, which is the most effective way for the organization to plan and act for the future. You might choose to adopt an orangutan or provide a monthly donation to the Save Forest campaign. All support makes a long-lasting difference to Critically Endangered species – and us all.