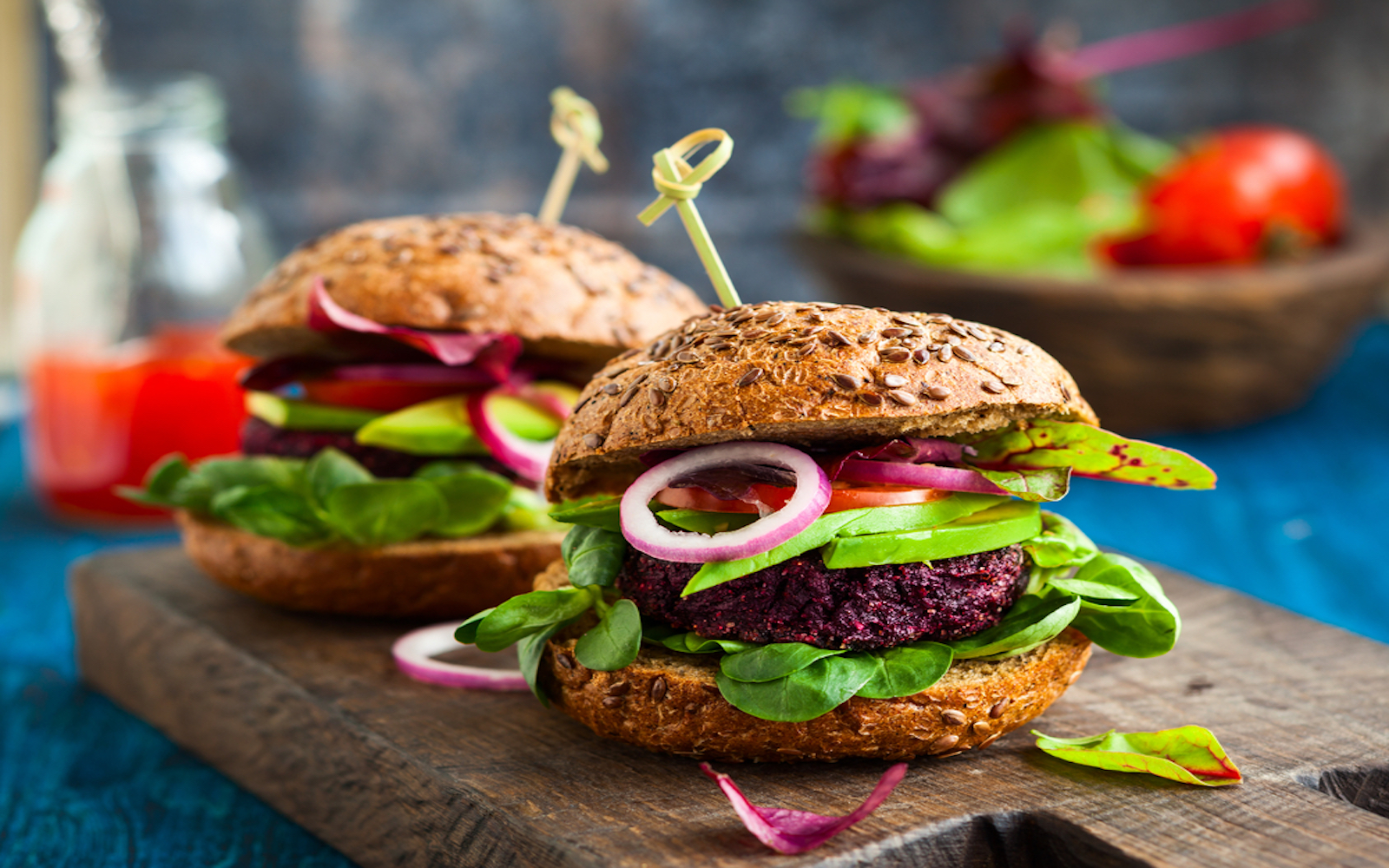 It wasn’t too long ago when it was difficult to find a good veggie burger. If this was a few years ago, you would have ordered one at a cafe and most likely received a defrosted hunk of black beans held together in a mushy patty. But as plant-based diets have grown in popularity, and more meat eaters grew to enjoy plant-based burgers, the options have skyrocketed along with the unique techniques used to create a delicious veggie burger.

What started as a basic vegan fast food option has grown to become a culinary phenomenon for both meat-eaters and vegans alike. Here are 10 of the best kinds of veggie burgers in 2018, so far.

Umami burgers are a chipotle black bean patty, with a variety of ingredients inside, and is a true thing of beauty. The standard version comes with guacamole, pickled veggies, cilantro and cotija cheese. You can get it topped with trademark “umami” ingredients: roasted tomato, shiitake mushrooms, house-made ketchup and caramelized onions. A high-brow and sophisticated concept started by Adam Fleischman, his goal was to recreate the “craving he gets for his two favorite burgers: the In-N-Out Double Double, and The Father’s Office burger.”

If you want to make this burger at home, try out this Umami Burger, topped with vegan bacon bits and the chipotle aquafaba cheese. This Mushroom and Zucchini Burger With Radicchio Slaw will also suffice.

Hopdoddy, an Austin-based chain that serves spectacular burgers, gave the La Bandita Burger its claim to fame. This burger is made of corn and black beans, and is topped with avocado, cheese, arugula, cilantro, chipotle mayo, onion and tomato and served on a whole wheat bun. Basically, this is the ultimate version of a southwest burger.

If you aren’t going to be in Austin anytime soon, try this Black Bean, Corn and Walnut Burger, this Black Bean Burgers With Cilantro Lime Sauce, or these Chipotle Maple Sweet Potato Burgers.

Bareburger changed the game with their quinoa veggie burger. It’s a patty made from tons of grainy quinoa, held together with different cheeses, usually on a brioche bun. It tastes best with onions, loads of sauce and spinach leaves. Ultimately it makes for a healthy, protein-packed alternative that everyone from all walks of life, and diets, enjoys.

We have a pretty serious love for quinoa here, and this Healthy Black Bean Quinoa recipe is one of our favorites. These Italian White Bean Quinoa Veggie Burgers are also super delicious and filled with beans and quinoa, which provide LOADS of protein.

Chicago Diner, a go-to place for any plant-based foodie, is the place that put the cauliflower burger on the map. Their Cauliflower Kale Burger is a patty made with cauliflower, kale, curry, arugula, and apple chutney. It’s only one of the three veggie burgers on the menu, but the cauliflower’s unique taste in a burger makes it a coveted favorite. Another restaurant favorite is The Flying Cock in New York, which offers a spicy meatless burger that is made from cauliflower, and a chipotle mayo.

Cauliflower burgers are becoming increasingly popular. This Cauliflower Lentil Burger is made from roasted cauliflower and lentils are mashed together and combined with breadcrumbs to form a nicely textured pattie. And this Spicy Cauliflower Chickpea Burger is smothered with buffalo sauce, filled with veggies, and piled with amazing toppings.

We already love mushrooms as they are; whether raw or grilled or sauteed but when it comes to incorporating them into a veggie patty, boy are we on board. When cooked just right, mushrooms can taste meaty and filling on a bun. The mushroom burger gained popularity after By Chloe, one of the top plant-based restaurants, featured their portabello mushroom burger, topped with grilled pineapple, onion marmalade, and a bourbon barbecue sauce. Yum.

If you want to make one in your own home, try this Portobello Burger With Caramelized Onions and Tempeh Bacon, a burger made with homemade avocado mayonnaise, savory Portobello mushroom, smoky tempeh bacon. These Portobello Mushroom Burgers are also a good option, as well as this Raw Mushroom Burger recipe, which puts a spin on the bun.

We all enjoy a classic veggie burger, one that resembles old favorites from fast food drop-in’s, but plant-based of course. These classic burgers have a veggie pattie, but often include vegan cheese, tomato, and lettuce or some sort of meatless bacon. Blossom, located in Chelsea New York, has a soy bacon “cheeseburger” that is simply to-die-for. At the vegan café, find a soy patty toppling with meat-free bacon, vegan mozzarella, caramelized onions, and mushrooms.

After having a burger at Blossom, you’ll surely want to make one for yourself. These Red Bean and Mushroom Cheeseburgers are easy to prepare, add a wallop of protein to your meal, and can be served alongside almost any side dish. This Super Simple Veggie Big Mac will surely make your mouth water with its crisp shredded lettuce, sweet, creamy sauce, and vegan cheese.

We adore a lentil burger, too! Try this Foolproof Mega Lentil Burger, or this Lentil Burger With Mustard Sauce, and then this Hearty Lentil and Brown Rice Burger, which is hearty, flavorful, and goes well with barbecue sauce.

Seitan is a great plant-protein, that can be used in a variety of ways. (Think pot roast, bacon, and sausage!) It gained popularity recently and became another great option for a veggie burger to contain. The Gochujang burger at Cinnamon Snail is topped with sautéed kimchi, pickled red onions, black-sesame gomashio, sriracha mayonnaise and peppery arugula and is a fan favorite.

These Crispy Seitan Burgers are made from seitan and beans, so they’re big on protein and all the seasoning gives it that “meaty” taste. And these Schnitzel Burger’s are made from a thin seitan cutlet and then layered with vegan mayo, arugula, red onion, and plenty of horseradish.

Beet burgers might seem unusual at first, but when cooked the right way and topped with the right amount of ingredients, these have quickly become another perfect way to enjoy a veggie burger. The veggie burgers at Hillstone’s in Manhattan are a mix of beets, brown rice, and black beans, dressed with sweet soy glaze and melted Jack. Skip the jack of course. This burger has rave reviews, even from meat eaters. The 5 napkin veggie burger at 5 Napkin Burger is built with beans, barley, brown rice, and beets. Their fans have called this, “the best veggie burger I’ve eaten!”

It’s for good reason too. Beet burgers are delicious! These Beet and Black Bean Burgers are topped with sprouts, fried onion, and mushrooms. These Smoky Pinto Bean-Beet Burgers add a nice kick and these Beet Burger With Chipotle Mayo has a sweet and savory patty.

Last but absolutely not least, the chickpea burger. Let’s face it; chickpeas taste good in everything from pasta to hearty burgers. The gourmet veggie burger at ABC Kitchen in New York City is chickpea-based and deep fried. Once people tasted this crunchy, filling burger, they were all for chickpeas. The phatty burger at Smorgasburg is another fantastic dine-out option. Besides being an excellent vegan source of protein and fiber, chickpeas also contain exceptional levels of iron, vitamin B-6, and magnesium. Did we mention that they’re delicious, too?

This Chickpea Burger With Avocado Mayo will blow your mind with its mix of herbs, a dash of hot sauce, and nutritional yeast. These Beetroot and Chickpeas Burgers are an incredibly healthy option and this Curried Chickpea and Kale Veggie Burgers With Baked Sweet Potato Fries recipe will be the sure favorite at your next gathering.

If you enjoy a unique plethora of veggie burger recipes like this, we highly recommend downloading the Food Monster App, it’s available for both Android and iPhone and has free and paid versions. The app is loaded with thousands of allergy-friendly & vegan recipes/cooking tips, has hundreds of search filters and features like bookmarking, meal plans and more! The app shows you how having diet/health/food preferences can be full of delicious abundance rather than restrictions!