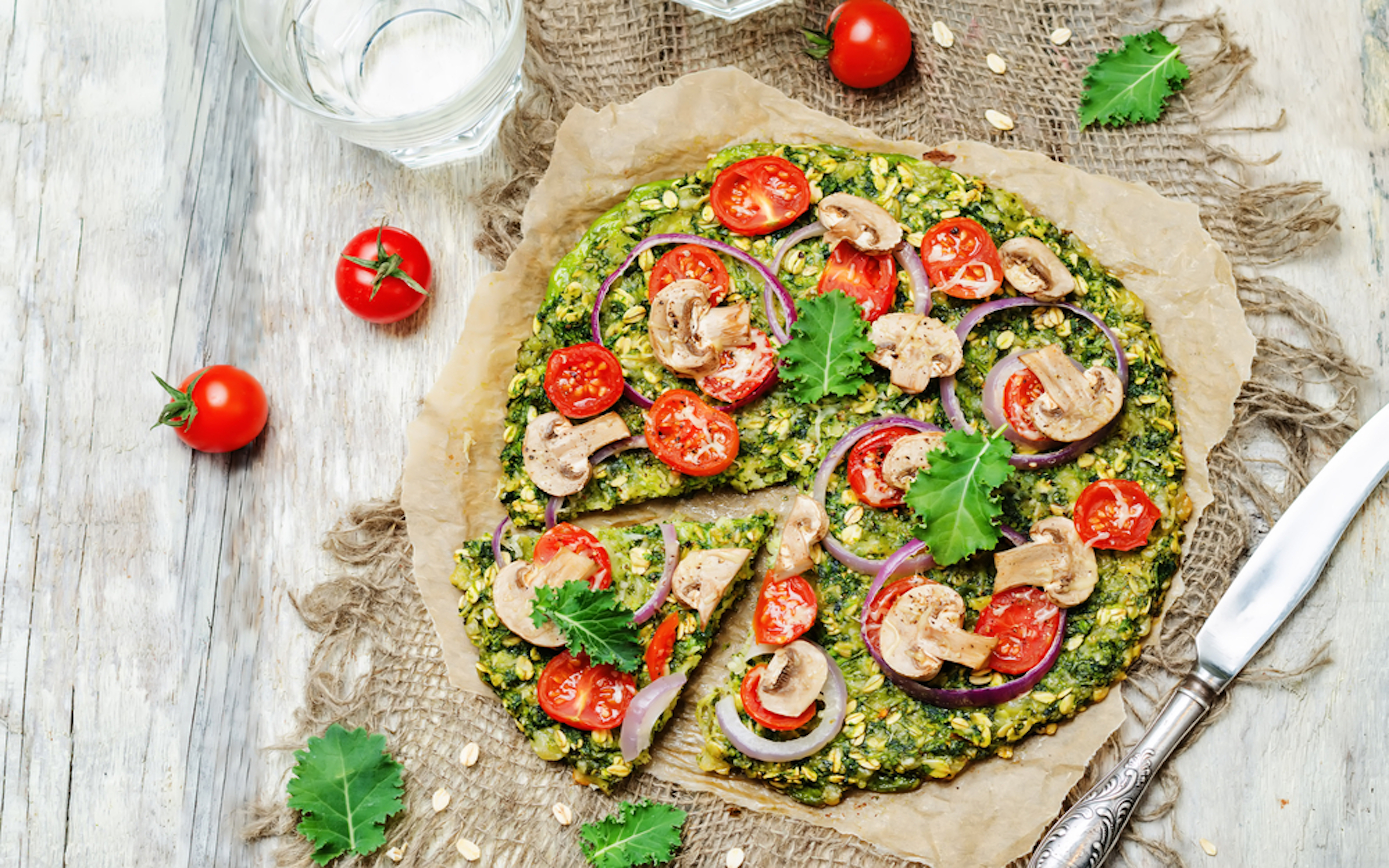 A traditional New York slice of pizza is comprised of a thick crust, tomato sauce, and tons of oozing, steaming dairy-filled cheese. What happens when you cut out a major, major ingredient, like cheese for example? Wait…nothing happens. Vegan pizza is taking over New York because it’s so, so good and doesn’t result in a stomach ache. 10 pizza spots are offering up vegan takes on quintessentially New York pies, and the results are delicious. 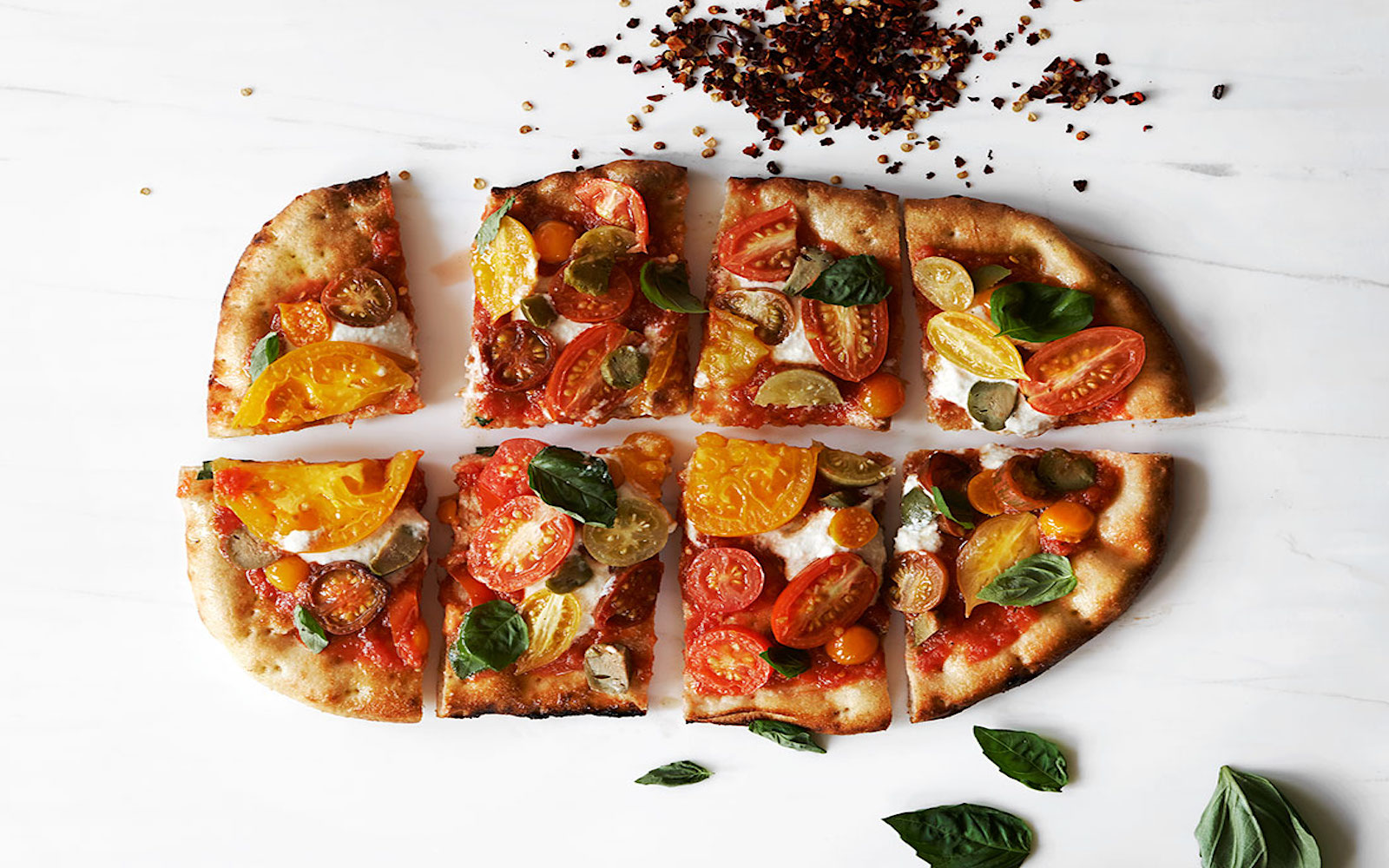 Of course, number one on our list is owned and curated by vegan chef extraordinaire Matthew Kenney. If you aren’t already vegan, then Double Zero will easily convert you. The East Village plant-based pizza shop offers 9 different pies that use nut-based cheeses. Options include a fennel pizza with cashew mozzarella, a spicy marinara topped with shiitake bacon, a truffle cashew cream pizza, and even some zucchini lasagna. Until their Philly opening, you can find this spot at 65 Second Avenue, New York City, 10003. 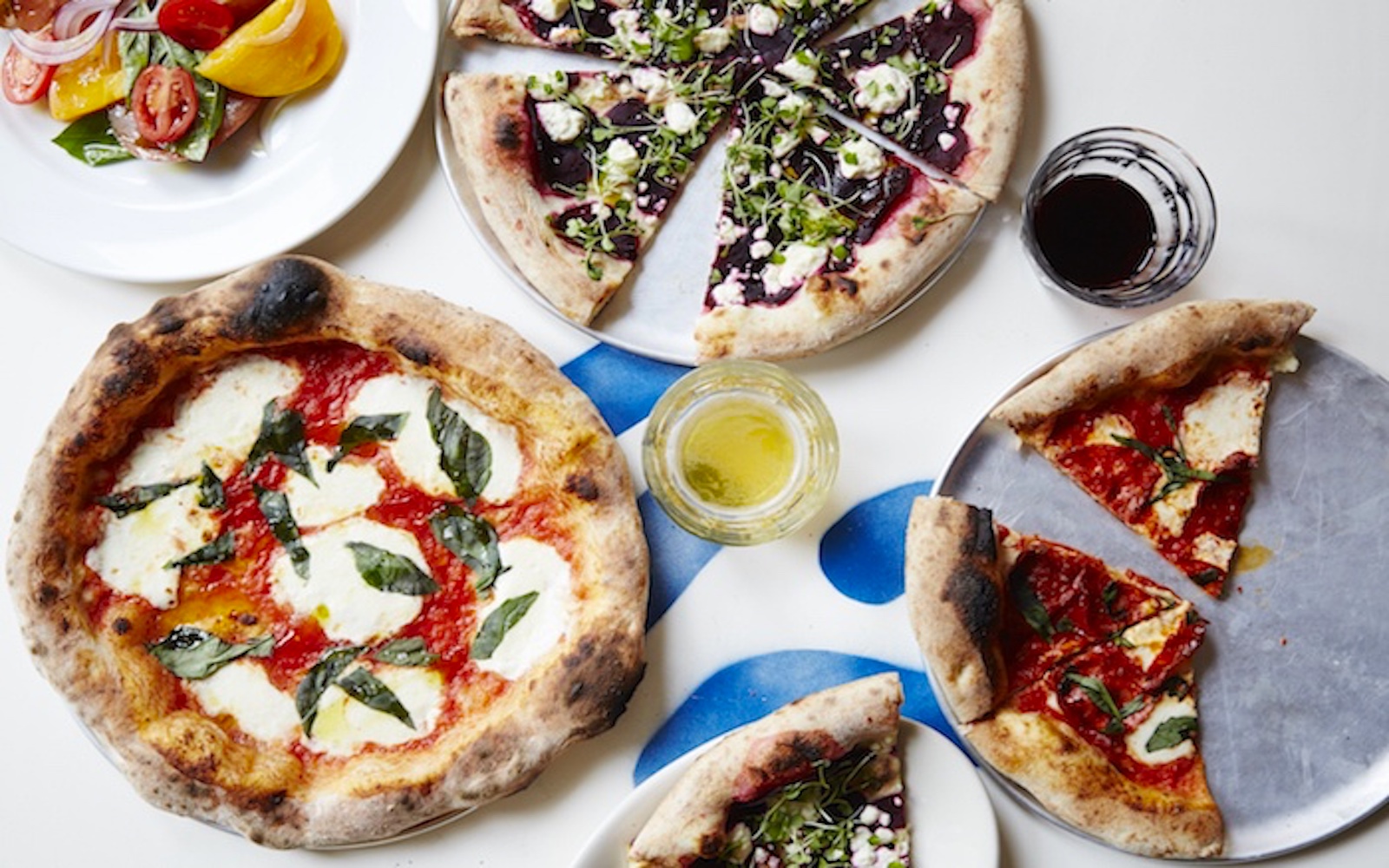 Besides the fact that Madonna is a regular here, Pizza Beach also offers up some tasty slices for vegans and nonvegans alike. Executive chef Eric Kleinman makes sure of that. This American restaurant and bar featured wood-fired Neapolitan pizzas, Daiya cheese, and gluten-free crust options. While you bite into a flaky, filling slice, you’ll enjoy beach-inspired surroundings and funky tunes. They’re located on the Upper East Side and West Side. 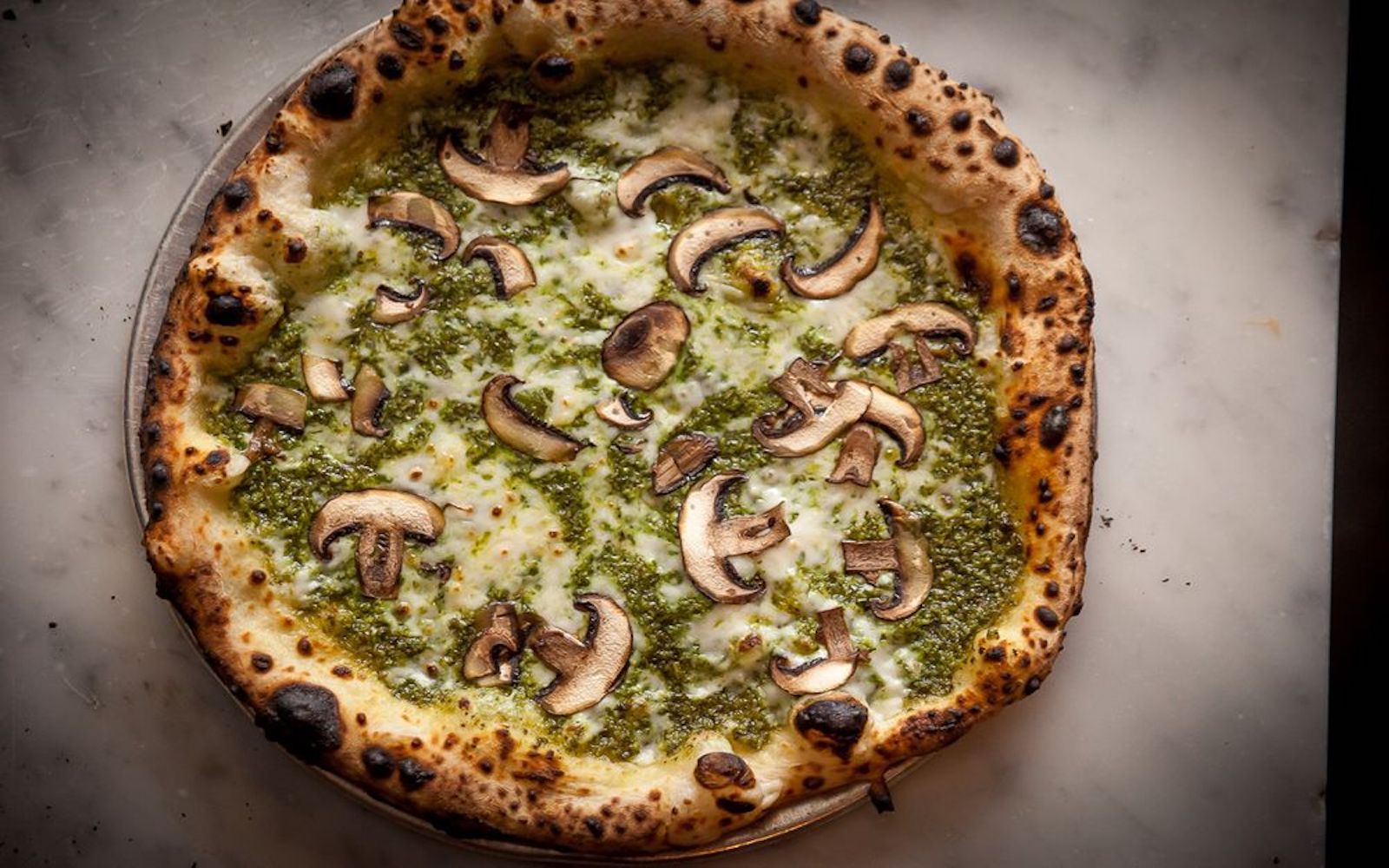 There are plenty of quirky menu options at Paulie Gee’s, a popular Brooklyn spot. One of the most ordered menu items here is this In Ricotta Da Vegan, which is a made of special vegan tomato sauce, vegan sausage, and house-made cashew ricotta. They also have plenty of fresh salads, and a pizza topped with sliced cremini mushrooms and NUMU vegan mozzarella. They’re located at 60 Greenpoint Avenue Brooklyn, NY 11222. 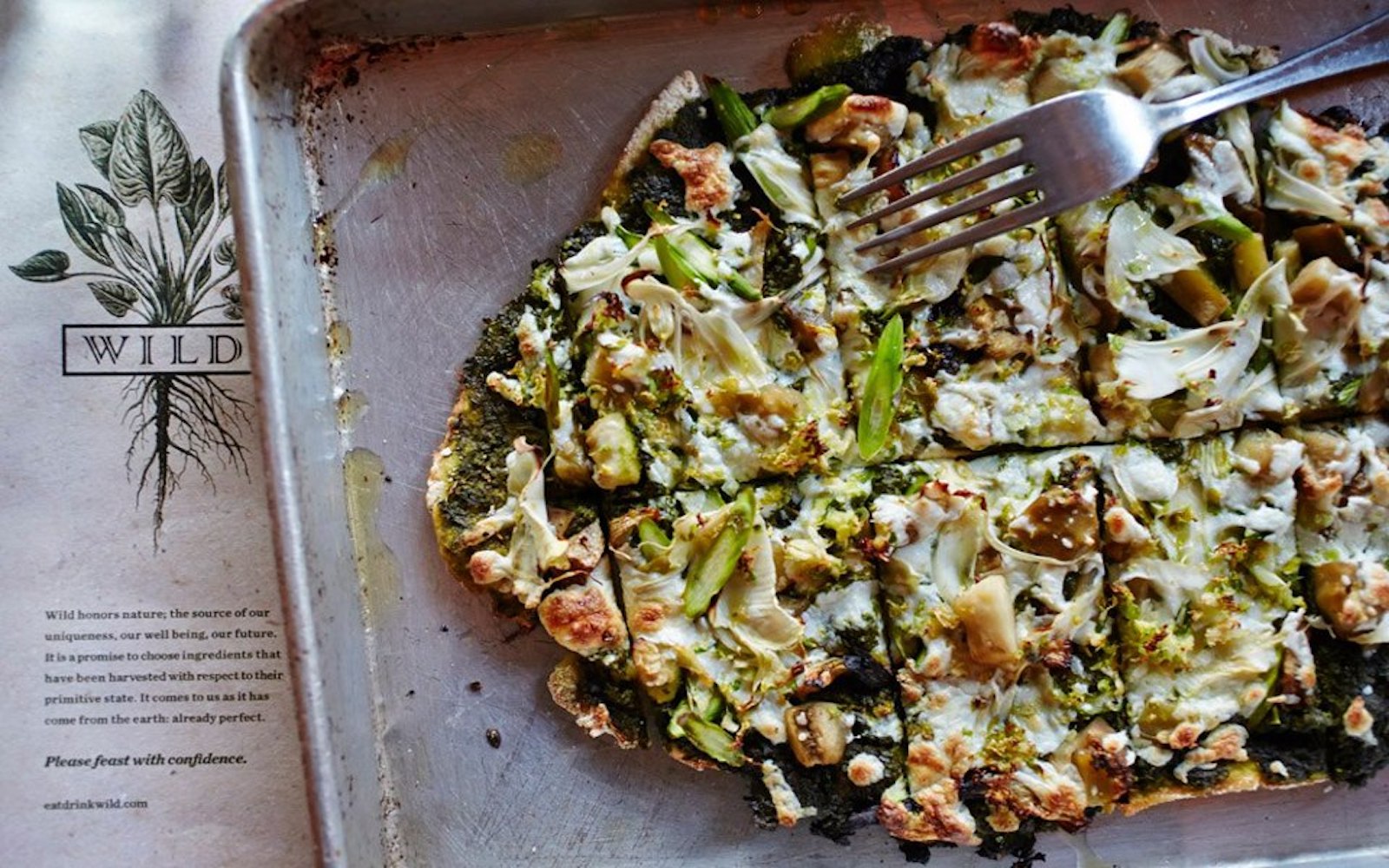 Paul McCartney, Sarah Jessica Parker, Donna Karan, Julianne Moore, and Meryl Streep have all eaten at Eat Drink Wild. And why? Because they have perfect gluten-free, plant-based pizza slices after 10 years of trial and error. They offer sustainable, healthy and tasty options for everyone. Their coveted Skinny B**** pizza has tomato sauce, grilled zucchini, eggplant, cherry tomato, and pesto. They also have plenty of other options like evoo mashed potatoes, zucchini noodles and a variety of vegan desserts. 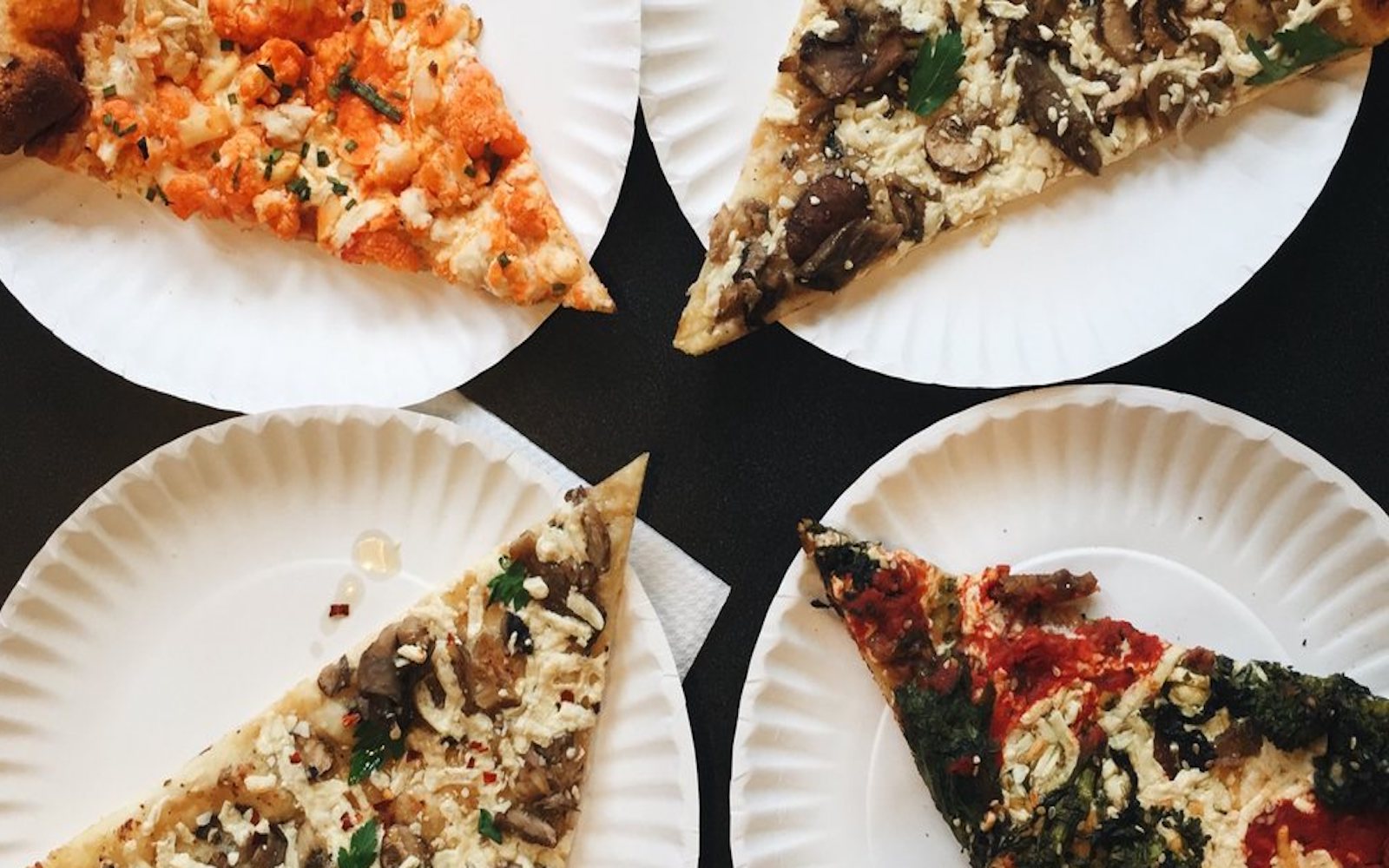 Screamer’s Vegan Pizzeria is the first ever all-vegan pizzeria in Brooklyn, and boy are we excited about it. There are so many Instagram worthy slices, that it’s actually hard to choose. On the menu, you’ll find deliciously cheesy plant-based slices, seitan pepperoni, house-made seitan sausage and almond parmesan toppings. Yes, we’re drooling as well.  They’re located at 620 Manhattan Ave, Brooklyn, NY 11222. 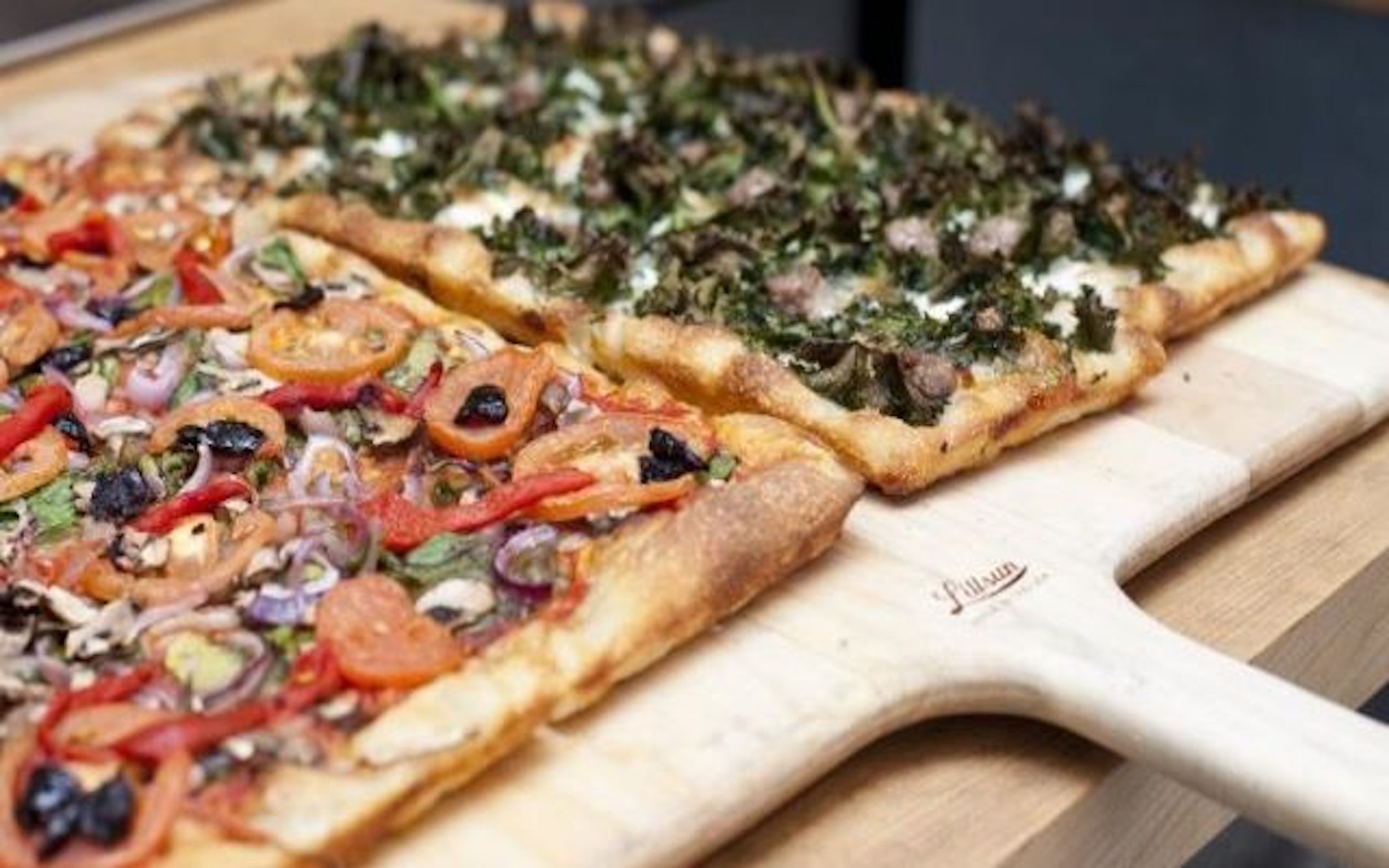 Although Williamsburg Pizza isn’t fully vegan, many vegans go here for their plant-based pizza options. Their vegan titled pizza is topped with tomato, garlic, red onions, spinach, mushrooms and fresh olives, making it a go-to for veggies everywhere. Besides the fact that they tested delivery with a drone, this is a great evening spot for a quick and delicious pizza dinner, without breaking the bank of course. Find them at 277 Broome St., and 265 Union Ave., Brooklyn. 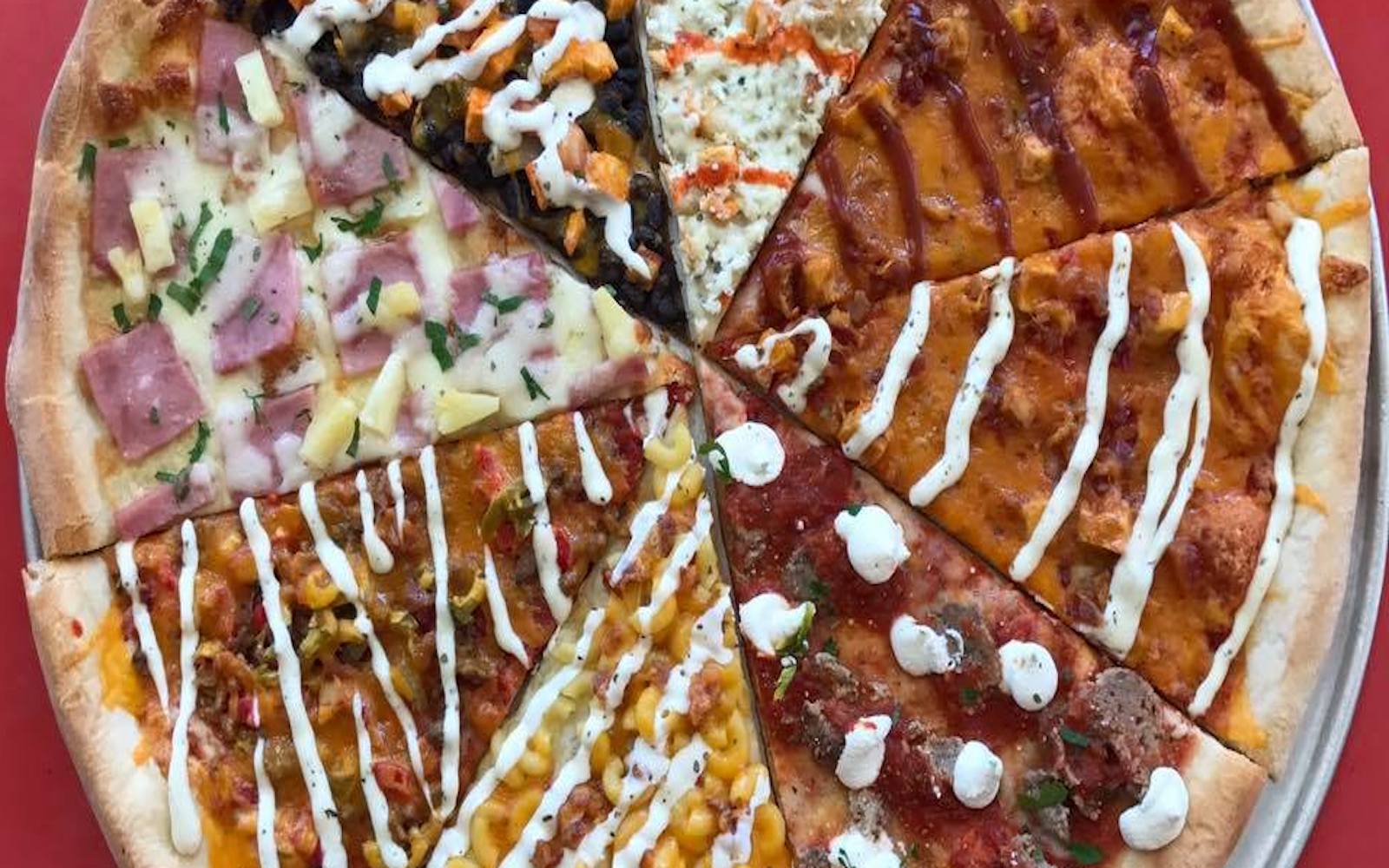 Vinnie’s Pizzeria, in two locations in Brooklyn, is as old school as it gets. Besides, of course, it’s vegan options. They have a truly extensive menu that has 100% vegan ingredients and delicious plant-based takes on classic pizzas like Margherita, eggplant parmesan, and cheesy white pies. They have a mixed veggie pie, a pie covered with sauteed spinach and broccoli, and a teriyaki ‘chicken’ pie that is simply to die for. Find them at 148 Bedford Ave., Brooklyn, and 253 Nassau Ave., Brooklyn. 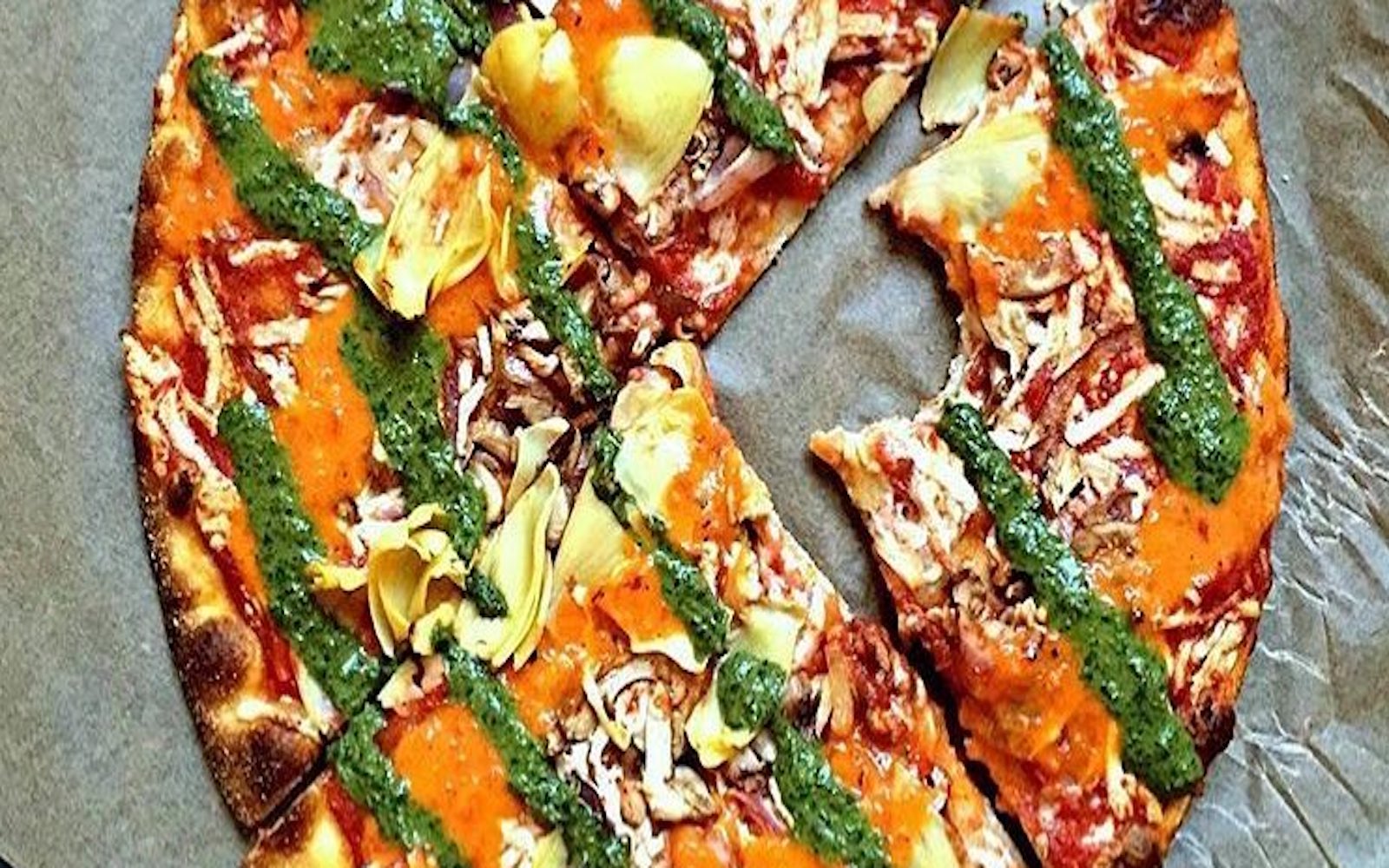 Two Boots is a New York staple for a thin, crispy, flaky vegan slice. The trendy and aesthetically pleasing spot has a few fresh vegan pies that are must-tries. They have quirky titles, like The Earth Mother which is a whole wheat Sicilian garden pizza, with plenty of fresh marinara and veggies. Another great option is their V for Vegan, titled after V for Vendetta. This pie is topped with artichokes, red onions, shiitake mushrooms, basil pesto and non-dairy cheese. They’re located in various colorful locations around New York. 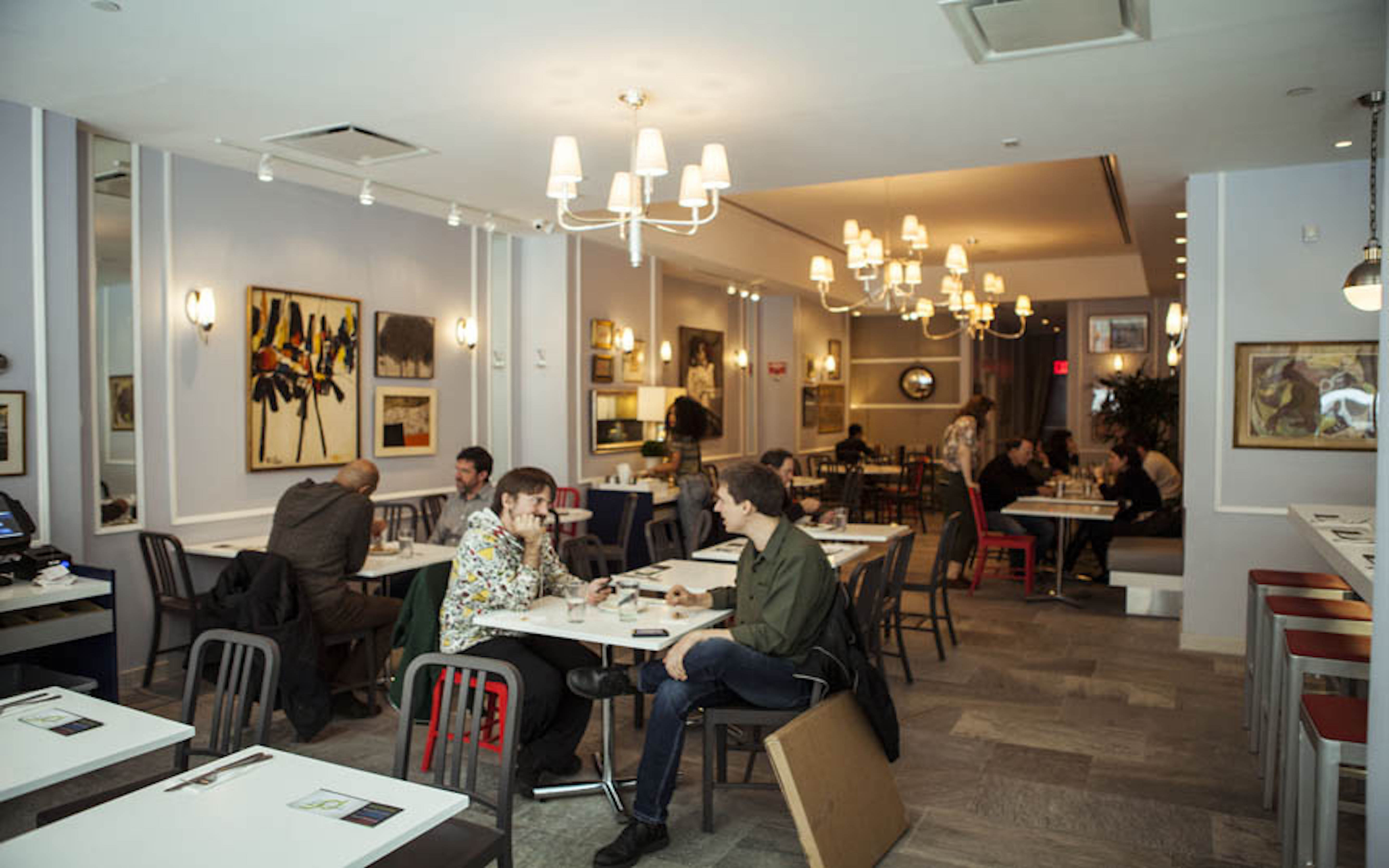 This homey little spot has become a serious staple for vegans everywhere. Besides the fact that Peacefood Cafe has plant-based pastries, raw sandwiches, and unique cookies, they have pizza too. They have a mushroom deluxe pizza, topped with roasted sweet peppers and zucchini. They have a roasted seasonal veggie pie, roasted potato pie and plenty of vegan cheese you can add on top. If you’re not in the mood for pizza, you can always have a veggie cheeseburger, tempeh avocado sandwich or baked soy nuggets. They’re located uptown and downtown. 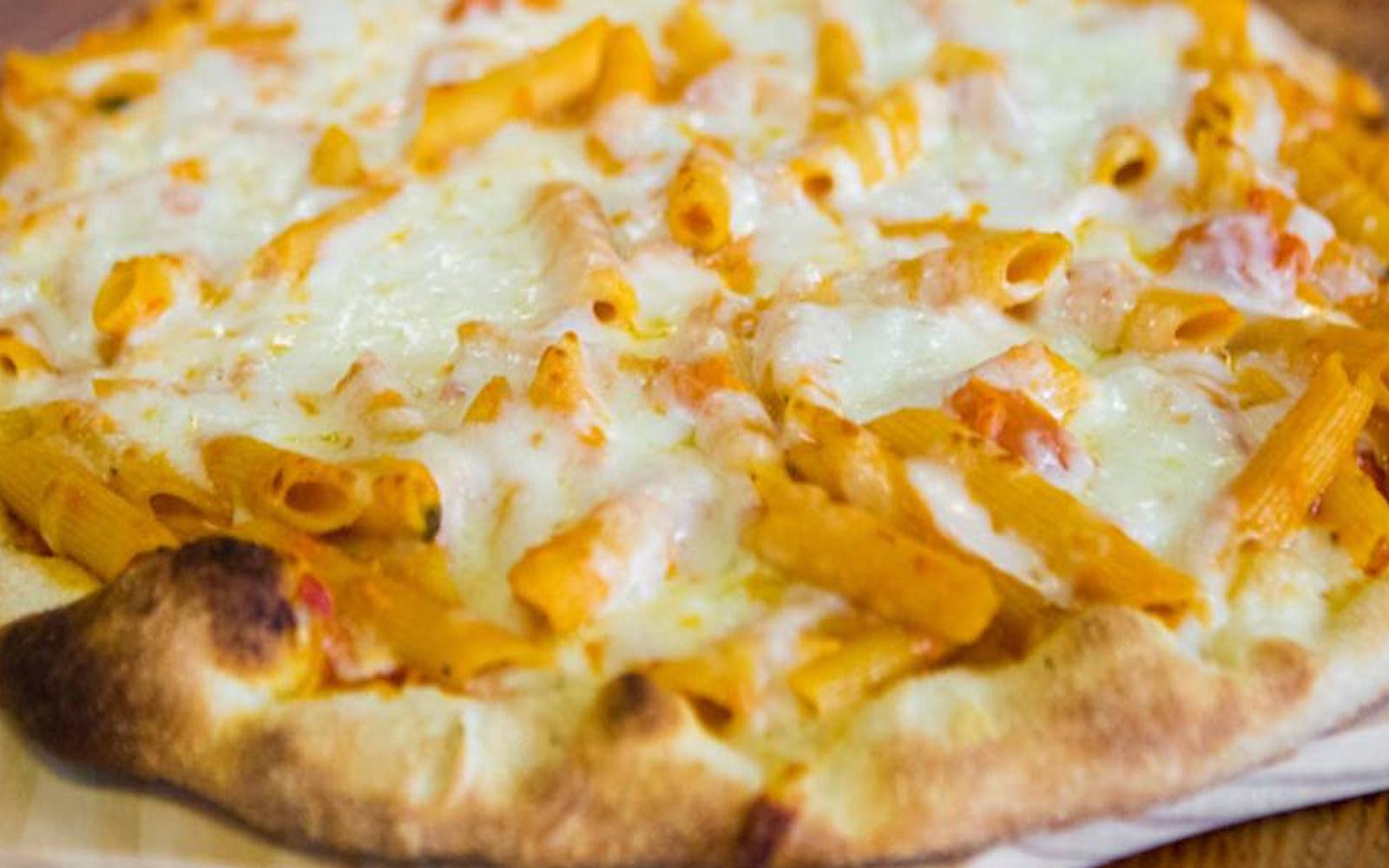 Last but definitely not least, Cafe Viva. This is one of our favorite, most coveted and delicious vegan pizza spots in New York. It’s so good, actually, that every Friday we order it for our editorial meeting. They have a pizza that can be topped with vodka pesto pasta if that says anything. They also have a Sicilian made with a thick crust, spicy marinara sauce, and no cheese. But wait! That’s not all. The menu also features a wheat free spelt crust with onions, kale, vegan pesto mayonnaise, vegan cheese, tomatoes, and lemon juice. So many options, so little time. Find them at 2578 Broadway, New York, NY 10025.

If you’re bored with basic pizza, use these 4 Creative Ways to Spice Up Your Vegan Pizza! You can also find plenty of vegan pizza options online, so you can just pop them out of the freezer and stick them in the oven. Use this Amy’s Roasted Vegetable Pizza after a long day, or make your own from scratch with this Paleo Pizza Crust. Also, these These 27 Vegan Pizzas Will Blow Your Mind. You can also learn How to Make Thick Pizza Sauce. Also, look to this 15 Incredible Homemade Pizzas With Veggie Toppings.