Ingredient Spotlight: Baobab, the African Superfood That Has Twice as Much Calcium as Dairy 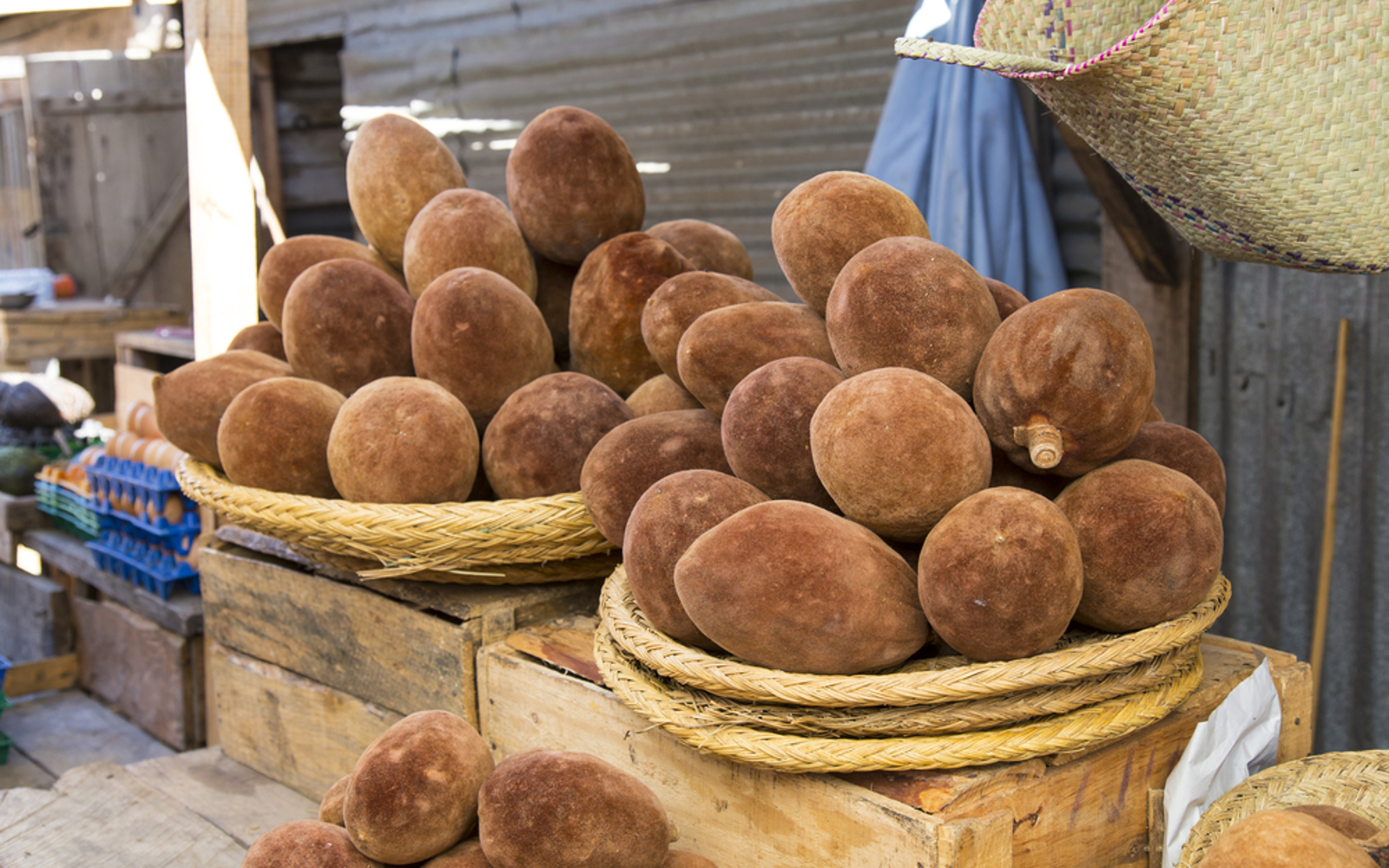 If you’ve never heard of baobab, we guarantee that you’ve seen a depiction of one at least once. Remember that iconic tree from The Lion King where Rafiki the baboon lived and performed shamanistic rituals? That is a baobab tree. It is also the iconic Tree of Souls in James Cameron’s Avatar. These stunning fictional portrayals of baobab aren’t too far from the truth — these trees really do grow to massive sizes and have been considered symbols of life for centuries. They are even known as “The Tree of Life” in some cultures. In recent years, the fruit of the baobab tree has been making its way into Western food — mainly in the form of powders. Let’s learn a little more about where baobab comes from, the health benefits, and how we can use baobab in the kitchen.

Baobab (pronounced bay-o-bab) is a prehistoric tree native to the African savannah that has existed for thousands of years, predating both mankind and the splitting of Pangea into different continents. Technically, baobab is a type of succulent, or a plant that is able to thrive by absorbing and storing water during the rainy season. Baobab trees have long, unusually thick trunks, which is where they store water. These massive trees can live up to 5,000 years and reach nearly 100 feet in height with a trunk circumference of up to 36 feet. However, the trunk of the Glencoe baobab may reach an impressive circumference of 165 feet — that’s the kind we see in The Lion King.

Today, most baobab trees grow in Madagascar, but they also grow in western, northeastern, Central and Southern Africa, Oman, and Yemen in the Arabian Peninsula, Malaysia, and Australia. During the dry season, baobab trees yield a large, nutrient-dense fruit about the size of a coconut. The shell has a velvety texture and the powdery white fruit inside has been described as tasting acidic and tart, with notes of grapefruit, pear, and vanilla. Baobab is not cultivated commercially, but wild harvested and then ground into a powdery white substance. 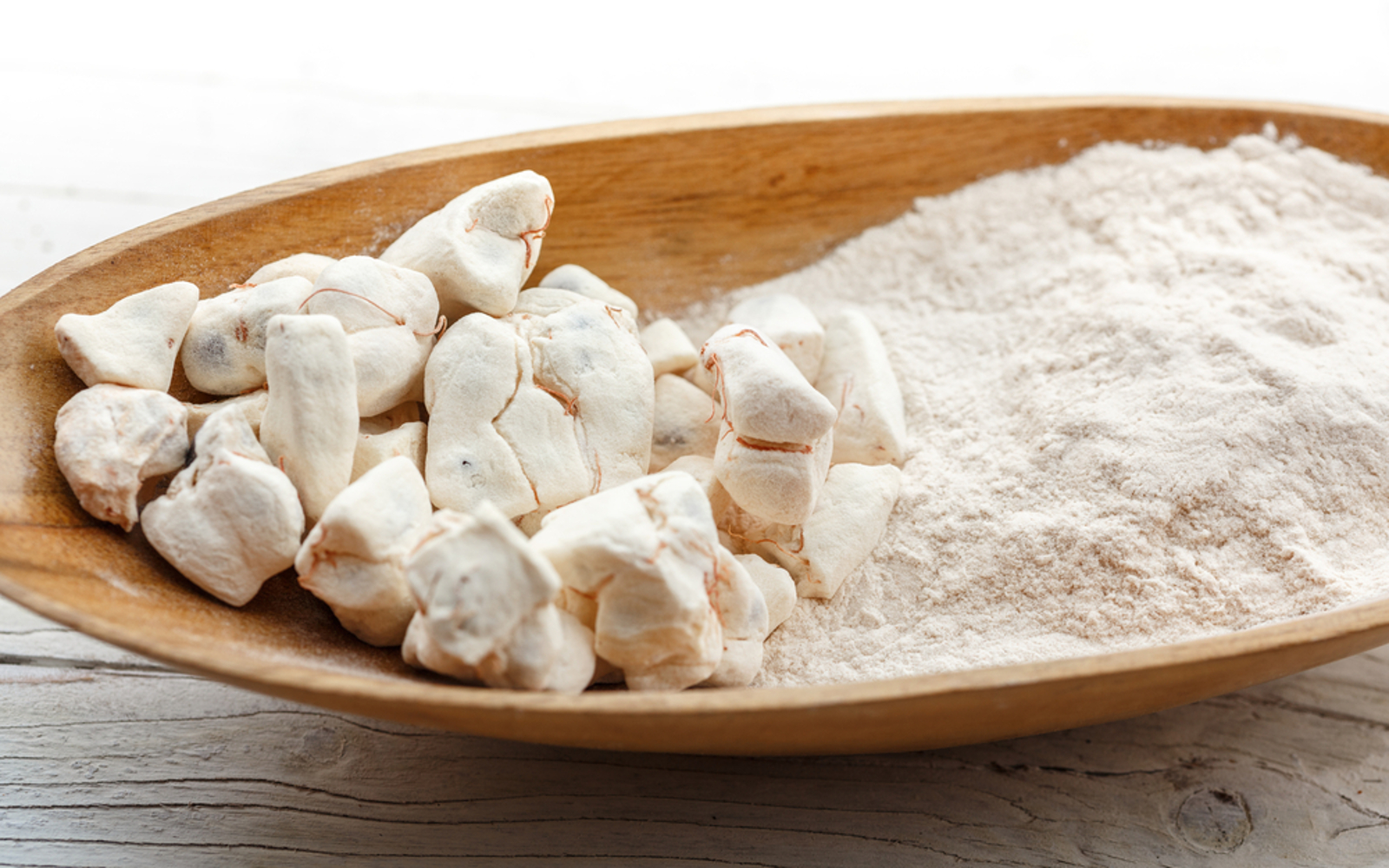 Baobab fruit are rich in nutrients, which is how they are earning a name as a superfruit. It is a good source of calcium, vitamin C, potassium, magnesium, zinc, vitamin A, thiamin, vitamin B6, and bioflavonoids. It also acts as a prebiotic and is high in fiber, containing 10 grams of fiber per fruit. It is said to have 10 times the fiber of apples, six times the vitamin C of oranges, two times the antioxidants of acai berries, two times the calcium of dairy milk, four times the potassium of bananas, and five times the magnesium of avocados. In addition to that, the white pulp of the baobab fruit is richer in antioxidants than blueberries, açaí, and goji berries.

Traditionally, baobab has been used in African populations to relieve symptoms of diarrhea, constipation, and dysentery. Some research has suggested that baobab fruit may reduce starch digestion and glycemic response in humans.

How to Use Baobab 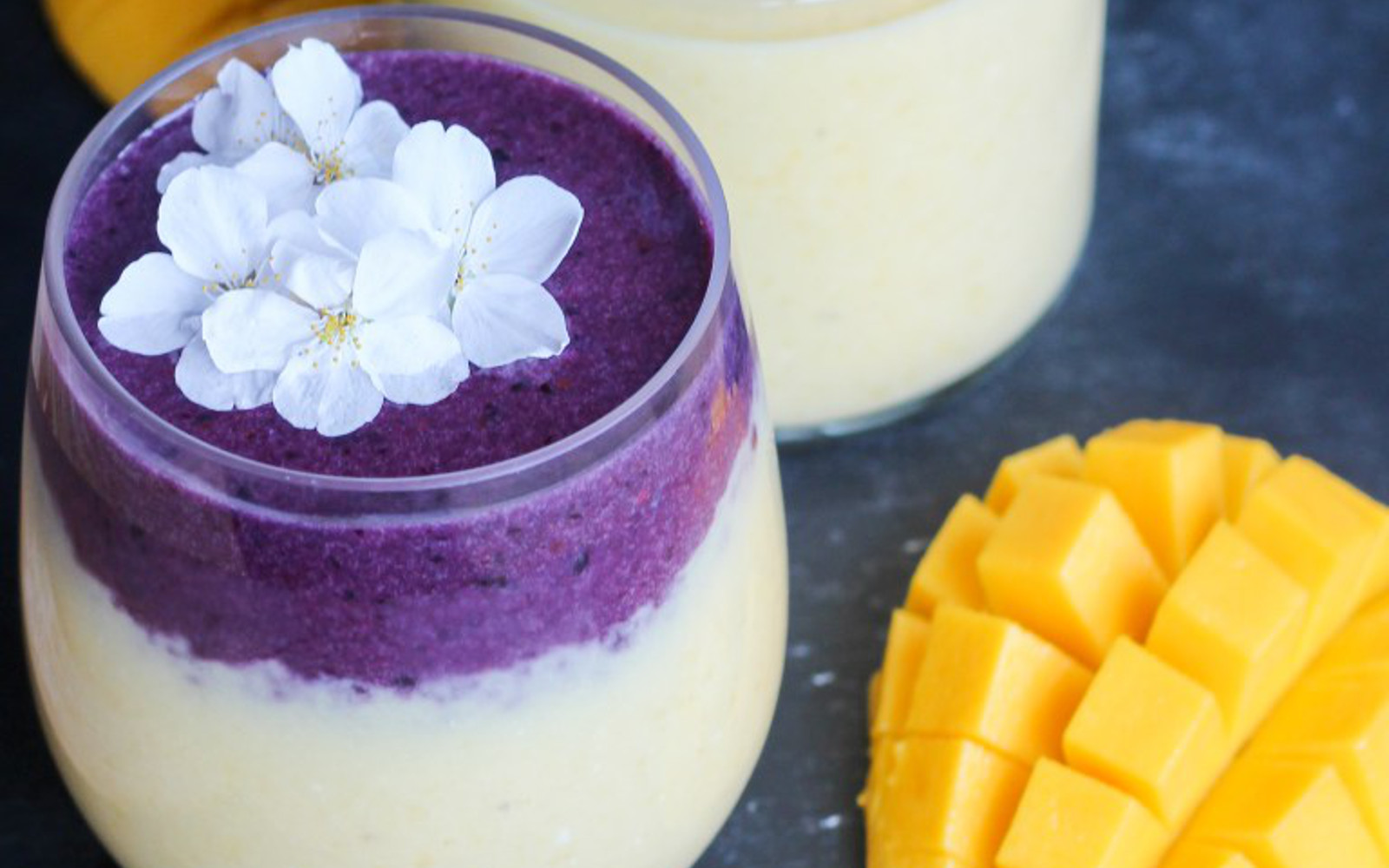 Because baobab is sold in powder form, it is incredibly easy to incorporate into your everyday diet. You don’t need much — just a teaspoon a day is enough.

For breakfast, try adding baobab to your oats or porridge, as in this Raw Baobab Buckwheat Porridge or this Banana Oatmeal With Hazelnut Butter, Raisins, and Baobab Powder. It would also be good in these grain-free recipes for Coconut Flour Porridge With Roasted Apricots or Coconut Almond Porridge or this tropical Grilled Pineapple and Dark Chocolate Oatmeal.

Try adding baobab powder to your smoothie. Its tart, tangy flavor will fit right in with any tropical-inspired flavors, like in this Dragon Fruit Pink Lady Smoothie, this Mango Lassi Blueberry Smoothie, this Tropical Turmeric Smoothie, or this Raspberry and Blue Spirulina Smoothie. See our vegan smoothie recipes page for more ideas. 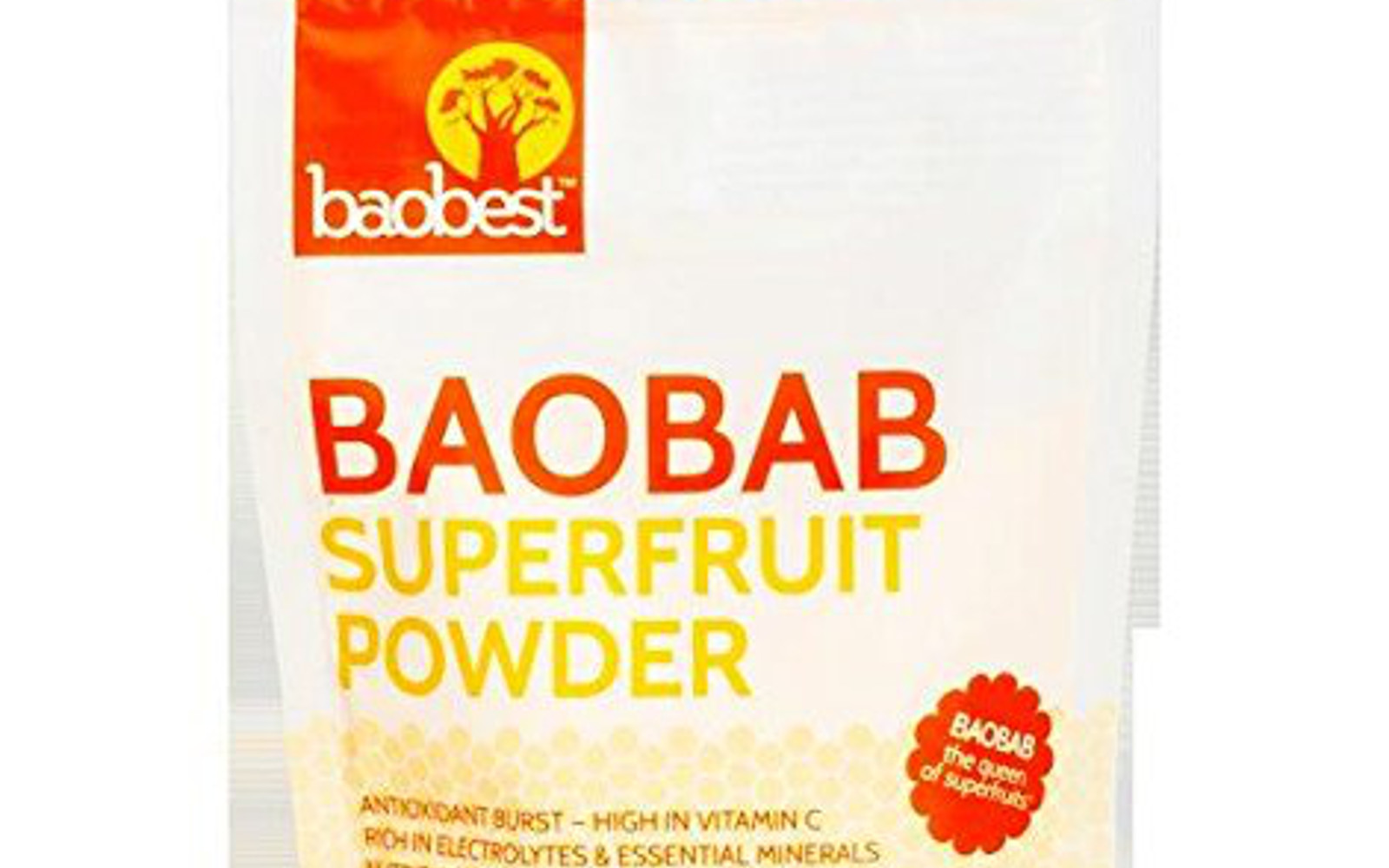 Luckily, baobab powder has become so popular in recent years that most grocery stores now carry it. Check the aisle where your local grocery store keeps other superfoods like goji berries and cacao powder. If baobab is not available near you, you can buy it online. This raw, organic Baobest Baobab Fruit Powder is perfect for adding to smoothies, oats, desserts, and more. You can pick up one 7-ounce bag for $13.99.

You can also get superfood snacks infused with baobab, like these Baobest Baobites Super Fruit Snacks. According to the product description, these dried fruit snacks have twice the antioxidants of dried blueberries, 3 grams of prebiotic fiber, and more potassium than bananas. They are also vegan, organic, non-GMO, gluten-free, and preservative-free.  Or, try these Bonga Foods Baobab Superfood Chews, which are non-GMO, free from added sugar, gluten-free, and vegan. One box comes with 12 individual 1.4-ounce packets (and you can choose from the flavors Pomegranate, Mango, Raspberry, and Strawberry) that are perfect for taking with you for school, work, or after the gym. 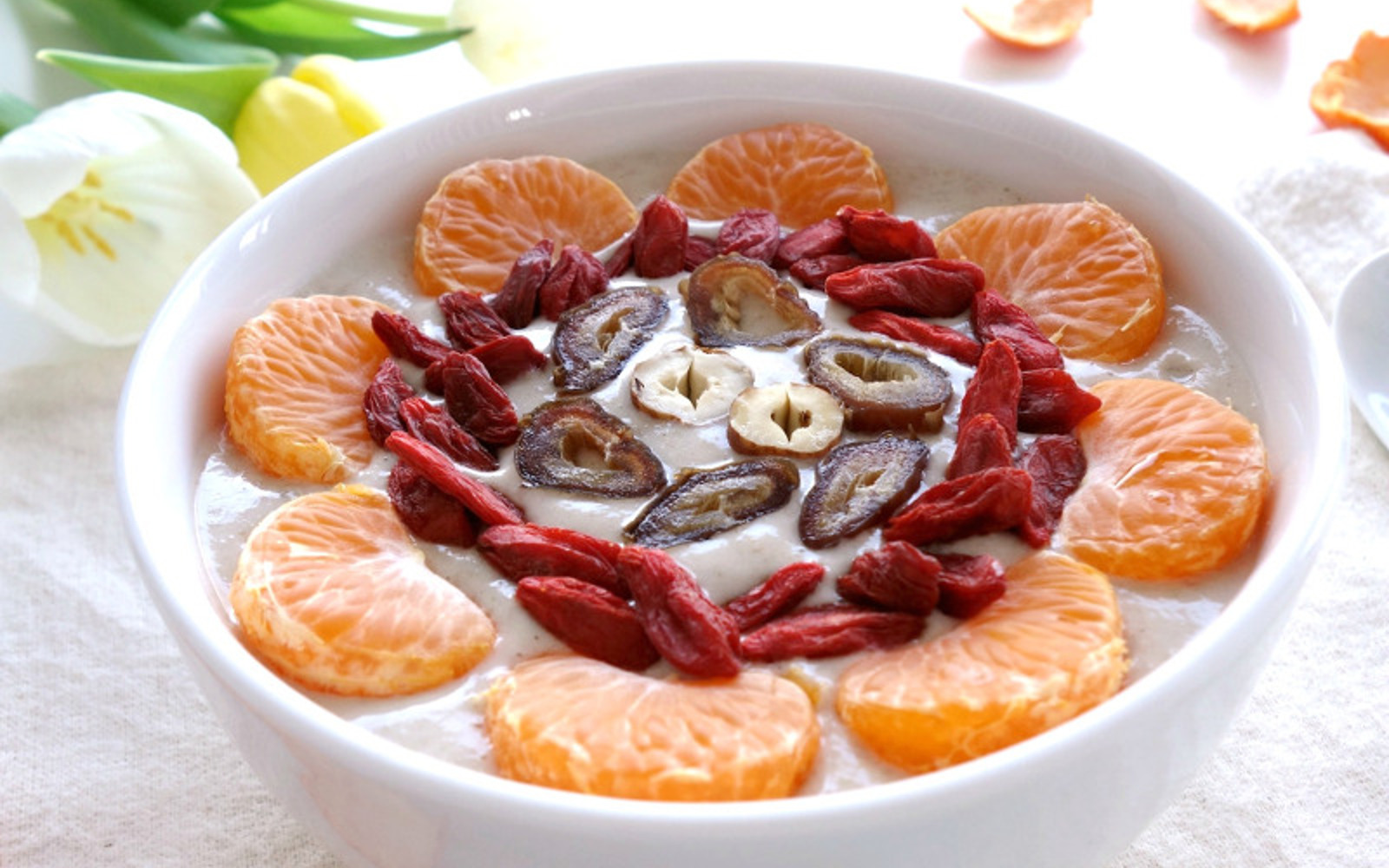