All About Artichokes: How to Select, Prepare, and Store Them 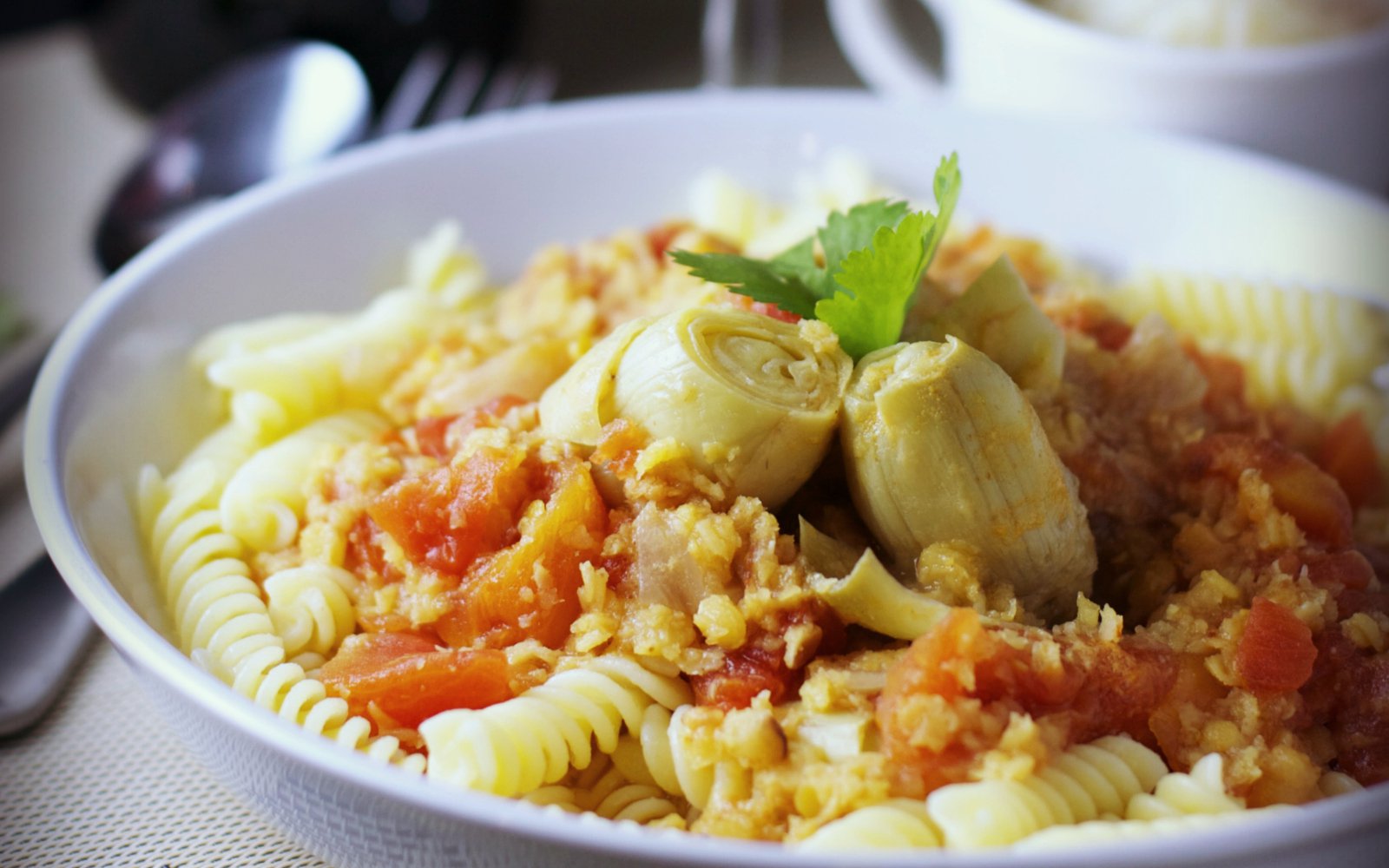 There are some vegetables that just don’t get the love they deserve. You see them in the store and think, “What do I do with that?” and keep walking. One veggie that often gets that response is the artichoke. It just looks … complicated. With all those tough leaves layered like hard shell, artichokes look more like hand grenades than food. But if you give edible flowers a chance, you’ll see that they aren’t hard to work with at all. They just need a little love, a little attention and they will reward you with a delicious dish that will leave you wondering why it took you so long to get on the artichoke train. Here are some tips on how to choose, prepare, and cook with the seasonal spring beauty that is the artichoke. 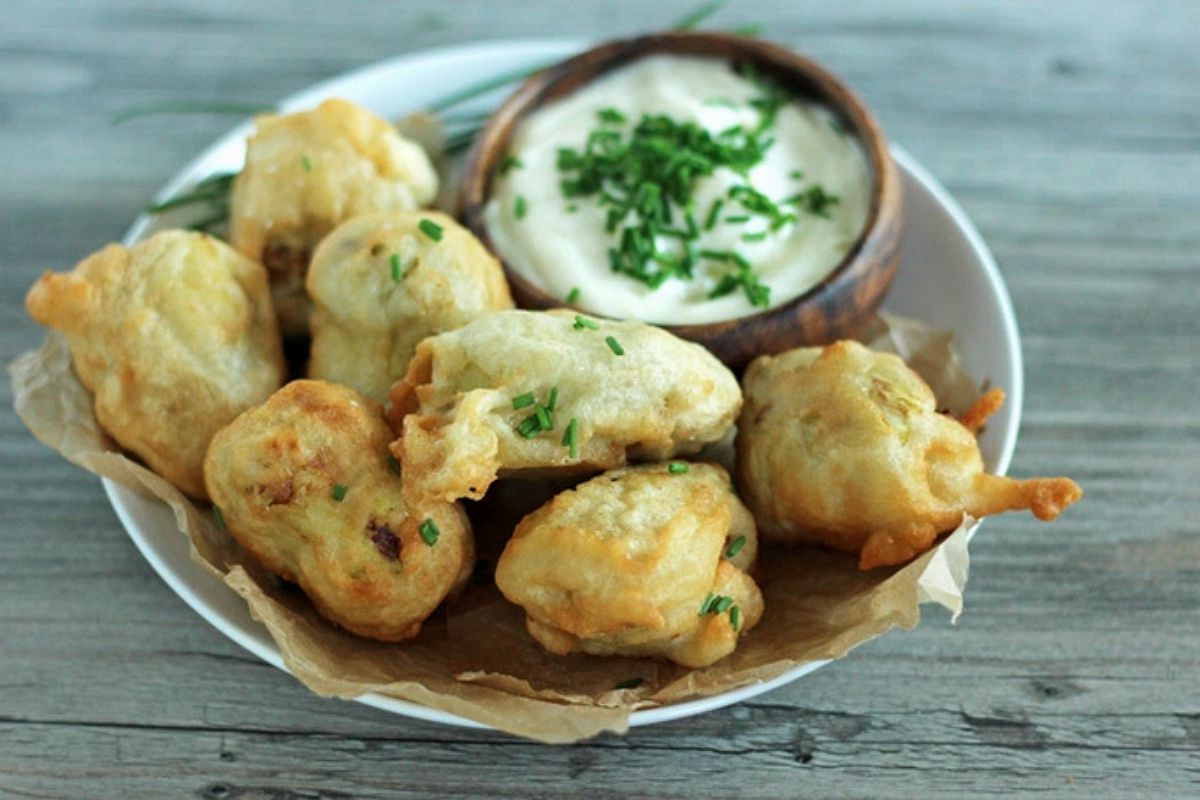 Artichokes come into season in March and stay through June. When choosing artichokes, pick them up and get a feel for the weight. Select ones that feel solid and heavy; they get lighter as they get older. The leaves should be thick, tightly closed, and a deep green color. When you rub the leaves, they should squeak. Older artichokes have opened, dry, or cracked leaves.

Does size matter? That depends on which part of the artichoke you care most about. If you love the leaves, small artichokes are more tender and sweeter. If the heart is your favorite part, larger artichokes have larger hearts. There are also baby artichokes which are not only adorable, but sweet, tender, and easier to prep.

Store the artichokes in the refrigerator, where they will keep for up to a week. 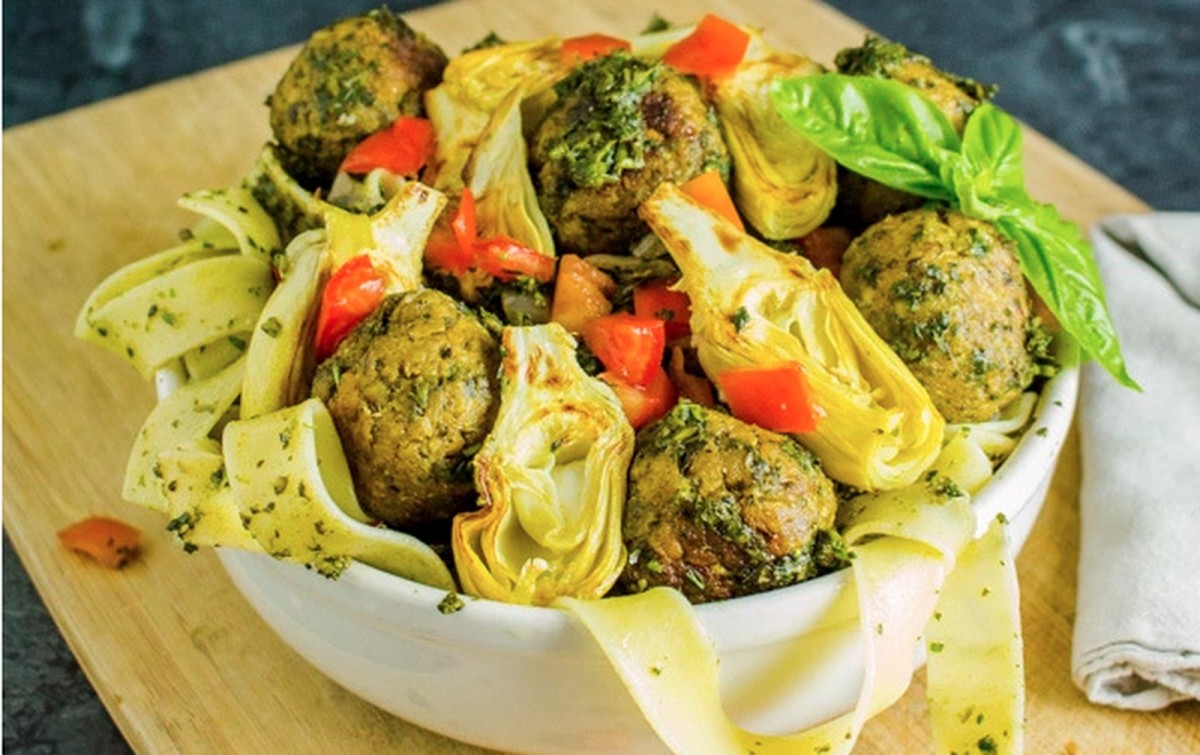 Prepping the artichokes isn’t hard, but it is a bit time-consuming. You will need both a sharp knife and kitchen shears. First, you want to rinse the artichokes in cool water to get out any grit hidden in the leaves. The best way is to fill a bowl (or the sink) with cool water and add a bit of lemon juice to it. Add the artichokes to the water and let them swim for a bit. Then, dry them well before continuing your prep work.

Next, work on the stems. Artichokes have thick stems. If you want to keep them, just trim them and peel off the hard exterior. Most of the time, however, people use a sharp knife to cut the stems off so the artichokes can stand up.

Now cut about 1 inch off the top of the artichokes. Pull off any dry, tough leaves around the stem area. Using your shears, trim about a 1/4 inch off the thorny leaf tips. Now, the artichokes are ready to stuff and/or cook. Submerge the artichokes in lemon water while you prepare the rest of them, and until you’re ready to cook. This will prevent the leaves from browning. Once you have your artichokes ready, you can get creative, like with this Pesto Papparadelle With Artichoke Chickpea Meatballs.

3. The Heart of the Matter 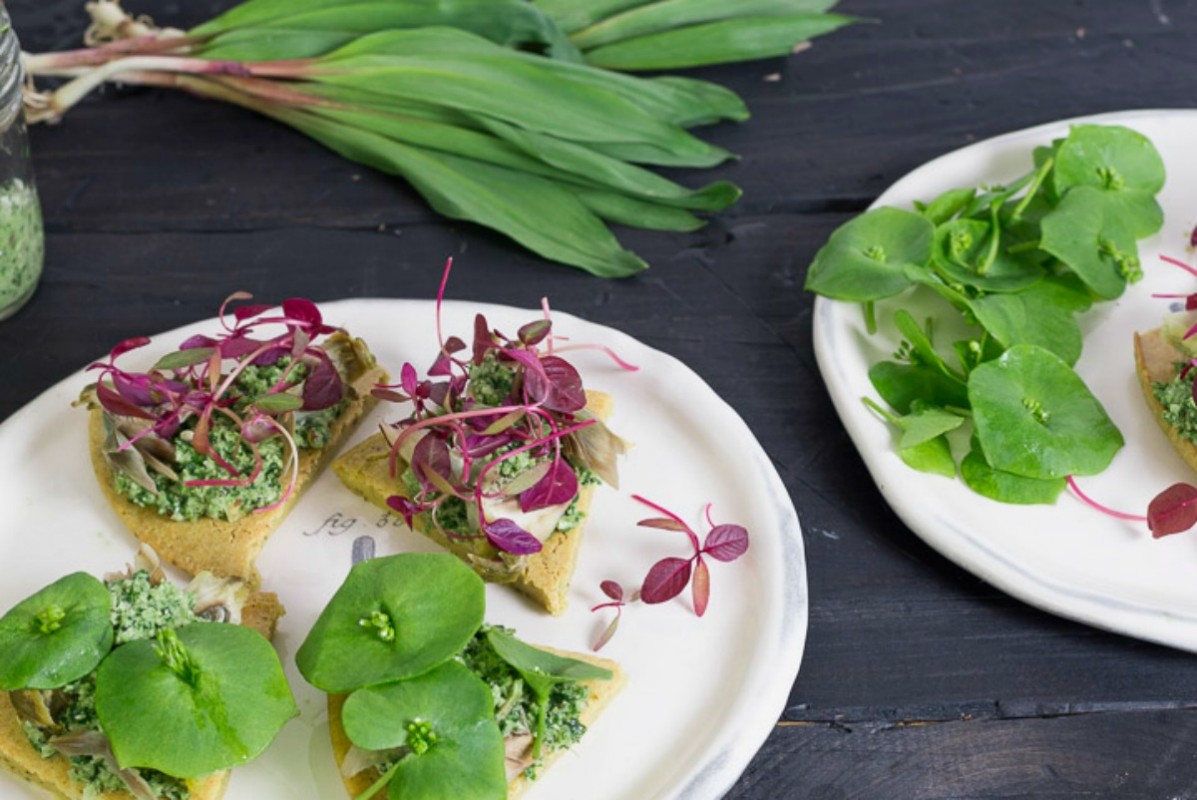 If you want to get to the hearts of the artichoke, there’s a little more work to do. The choke is a bundle of white and purple leaves and below those leaves lies a bed of hairy-looking filaments. You need to completely remove this choke, or it will make you choke … literally. You can remove the choke either before or after steaming the artichokes. 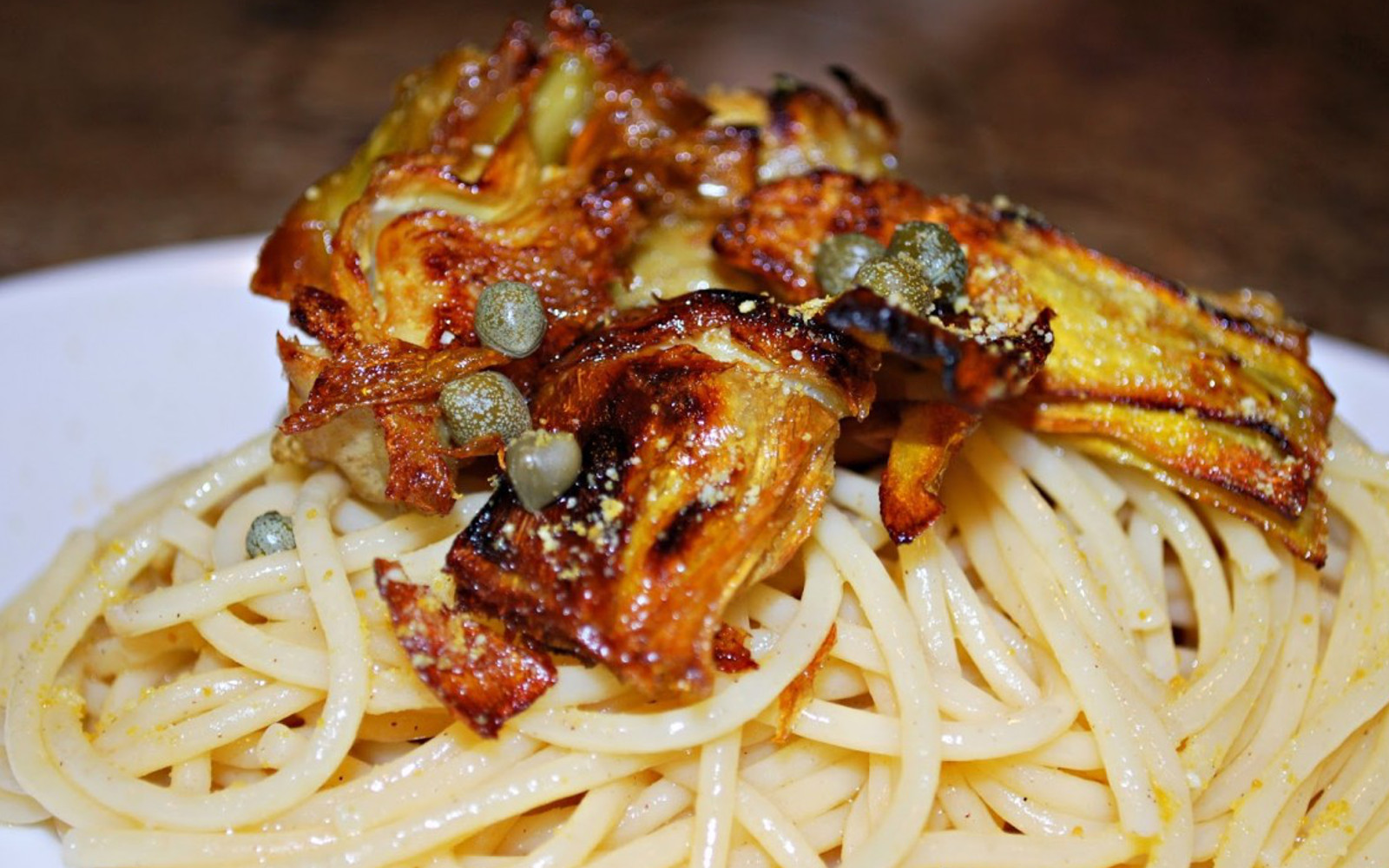 Artichokes are pretty tough, so they need to be boiled or steamed to make them tender before using them in recipes. You can also do this before getting the hearts out to make it a bit easier. To boil them, add the artichokes to a large pot of boiling salted water or broth. Reduce the heat and let them simmer, covered, for half an hour, or until you can easily pull a leaf out from the center or a knife goes into the center easily. If you want, you can also flavor the liquid the artichokes will cook in.

To steam them, set up a steamer basket over a pot of boiling water and place the artichokes in it. Reduce the heat to simmering, cover the pot, and steam them for half an hour or more until you can easily pull a leaf out from the center or a knife goes into the center easily.

Once the artichokes are tender, they can be used in other recipes or eaten as is. How do you eat an artichoke, you ask? Just pull off a leaf and scrape the “meat” with your teeth. Most people enjoy dipping the leaves first in a dipping sauce such as melted vegan butter or a roasted garlic aioli. Try your artichoke hearts in this Fried Artichokes Over Lemon Butter Pasta. Yum! 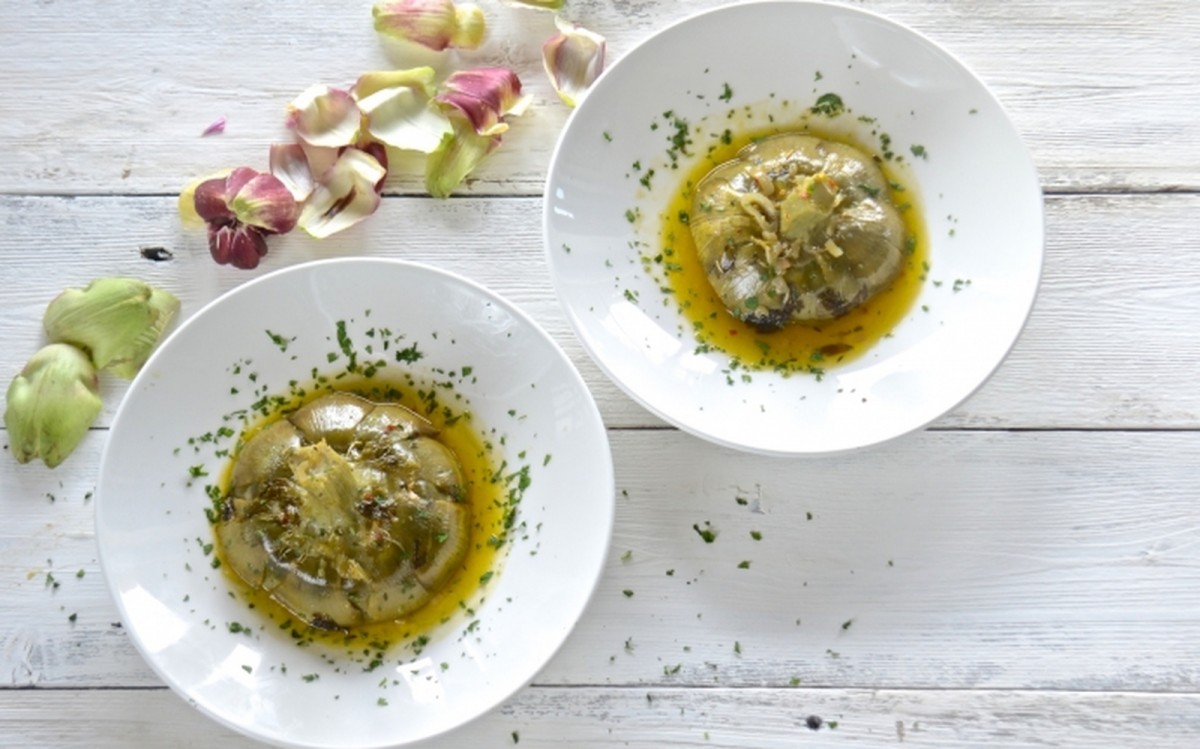 Braising is a great cooking method if you want to keep the artichokes whole (or halved) and make them flavorful and delicious. Since the artichokes will cook in a flavored liquid, you don’t have to steam or boil them first, though you can if you want them even more tender. Read Learn How to Braise Your Food for Maximum Flavor to get all the tips on braising.

Add your favorite aromatics into the pot such as onion, celery, carrots and garlic sauteed in a bit of olive oil. Season them with your favorite herbs and spices. Use water, broth or white wine for the cooking liquid. Cover the pot and let simmer until tender, about 30 minutes. The artichokes will be sweet and nutty, with the deep flavors from the aromatics they were cooked in. In this Carciofi alla Romana (Roman-Style Artichokes), the artichokes are cooked in broth flavored with lemon, garlic, herbs, and spices. After the artichokes are tender, the cooking liquid is reduced into a delicious sauce that gets poured over the artichokes. 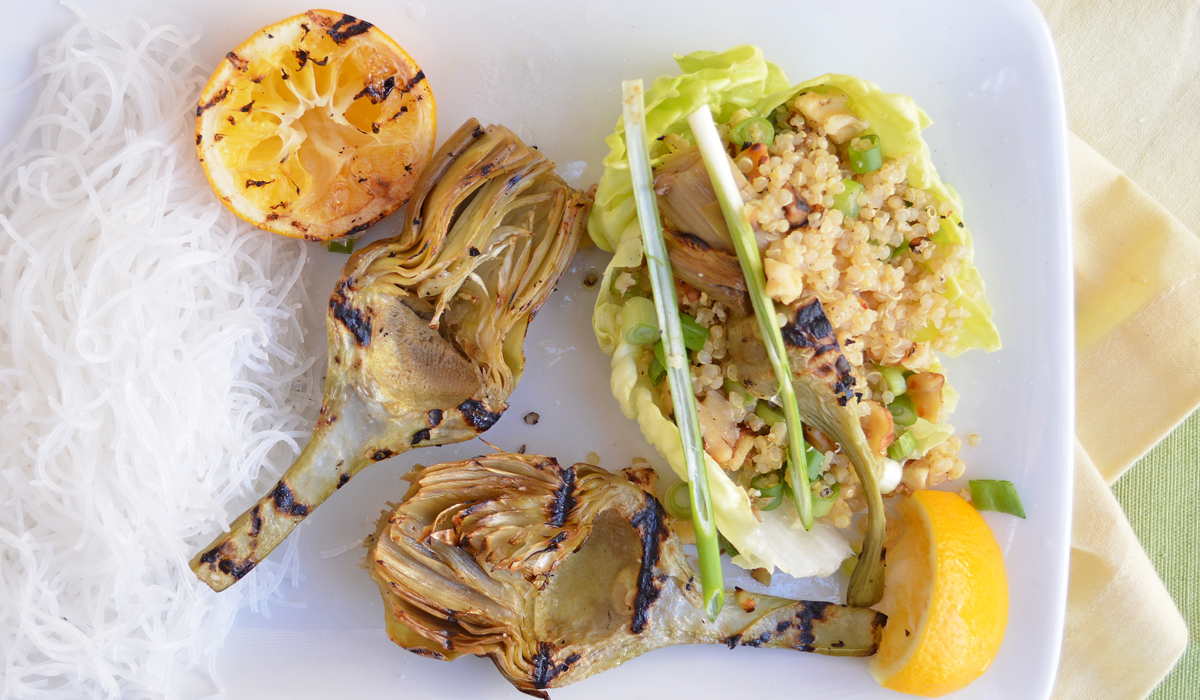 Once the weather gets warmer and you dust off the grill, think of artichokes for outdoor cooking. Grilling artichokes gives them a smoky flavor that’s irresistible. Of course, you can also grill them indoors using a grill pan. Check out How to Grill Tasty Veggies Indoors and Outdoors for awesome grilling tips.

The best way to grill artichokes is to slice steamed artichokes in half lengthwise and remove the choke. Brush the inside halves with olive oil and sprinkle salt and any other seasoning you like on them. Place them cut side down on the grill. It only takes about five minutes or so for them to brown. Turn and cook the other side until the artichokes are tender with a slight char. Use your grilled artichokes to make these Grilled Artichoke and Quinoa Lettuce Wraps. 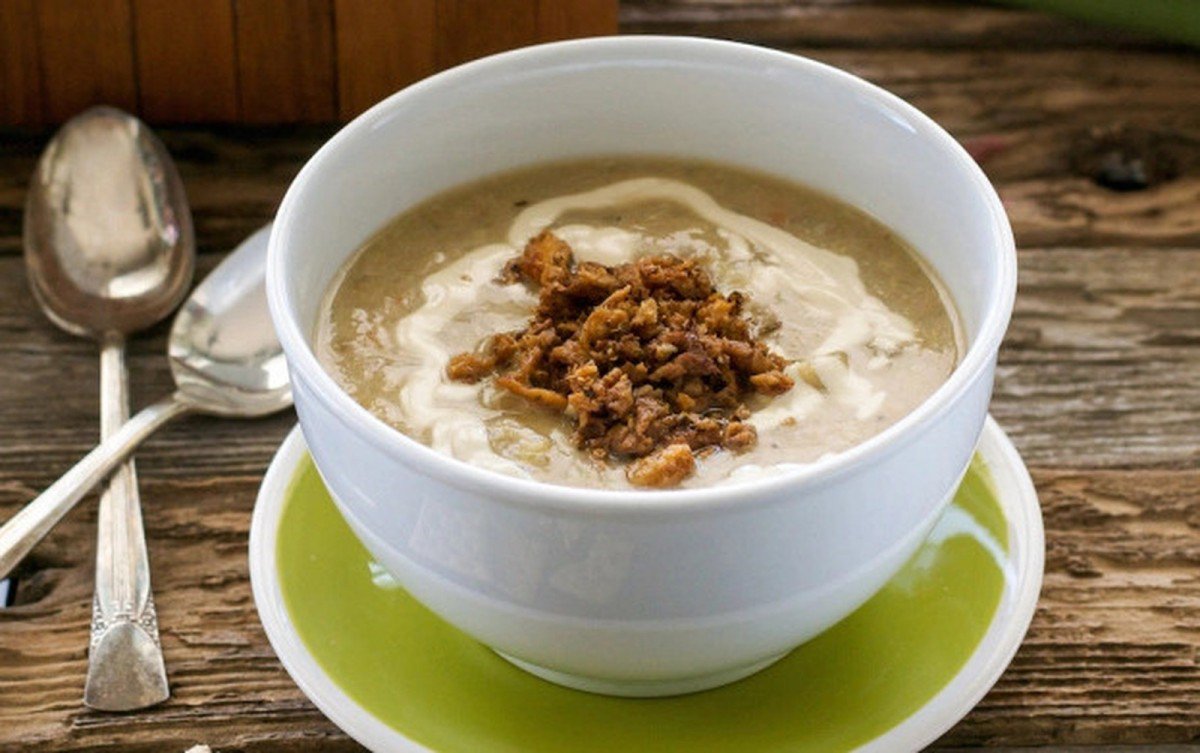 Growing up, it was a real treat when my mother would make stuffed artichokes. This was the only way I would eat them although if I’m being completely honest, I only ate the stuffing and avoided the artichoke. What do kids know? Today, I enjoy the whole thing. Just like bell peppers and other veggies, artichokes can be stuffed with whatever you like – vegan sausage, grains, nuts, and fruit – get more ideas in 25 Stuffed Veggie Dishes You Can Feel Good About Stuffing Yourself With.

To make stuffing easier, I use a trick: place each artichoke and place it top-side down on a cutting board. With your palm, press down gently on the base of the artichoke and the leaves will gape open for stuffing. Use a small spoon to fill the leaves with your stuffing. Be generous and let it overflow. My Overstuffed Artichokes have a vegan version of the classic stuffing. In this recipe, I sauté seasoned bread crumbs with garlic in olive oil and add vegan grated parmesan and fresh, chopped parsley.

For that great stuffed artichoke taste without the hassle that comes with preparing them, try this ‘Stuffed’ Artichoke Soup in the Slow Cooker. 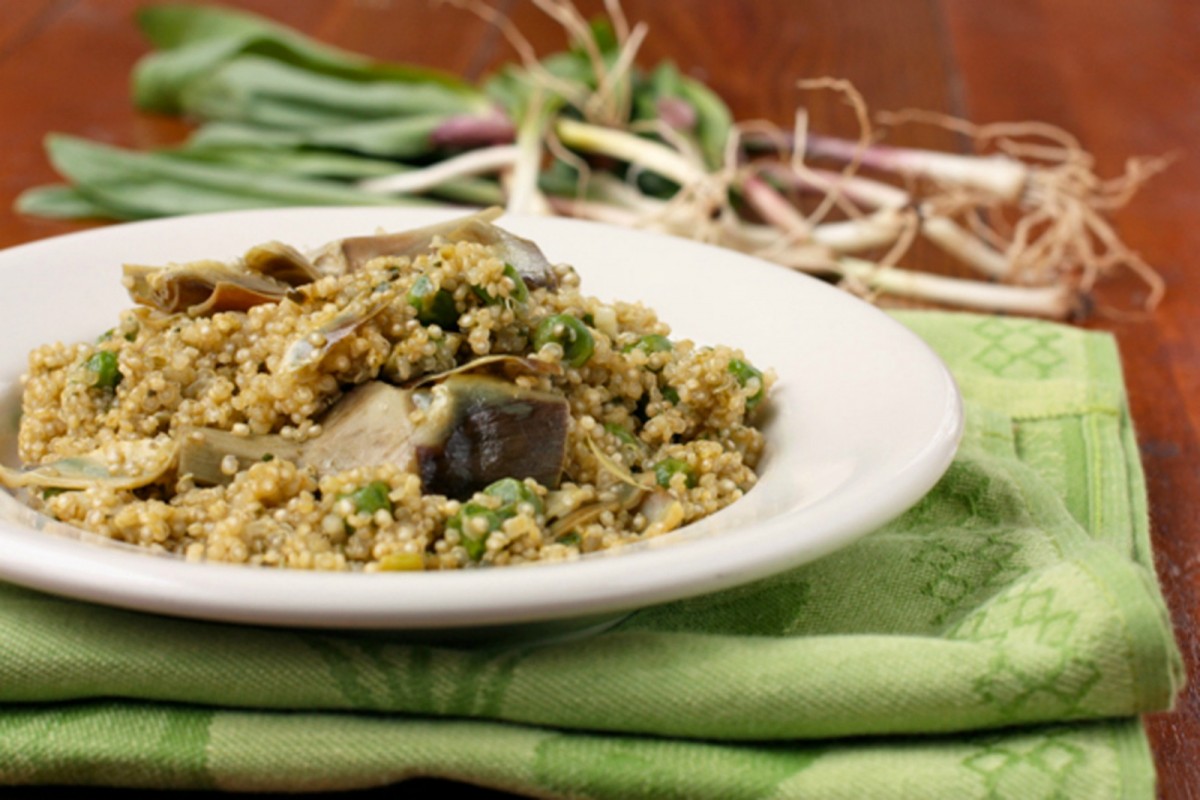 As mentioned, baby artichokes are cute, sweet, tender, and easier to prep than the full-size ones. Baby artichokes also cook faster since they are so small. This Artichoke Paella uses a bunch of baby artichokes that cook with the rice along with capers, olives, lots of Spanish flavors, and saffron.  In this Seasonal Quinoa Pilaf with Ramps, Artichokes, and Peas, halved baby artichokes are sautéed to become part of this delicious seasonal spring dish. 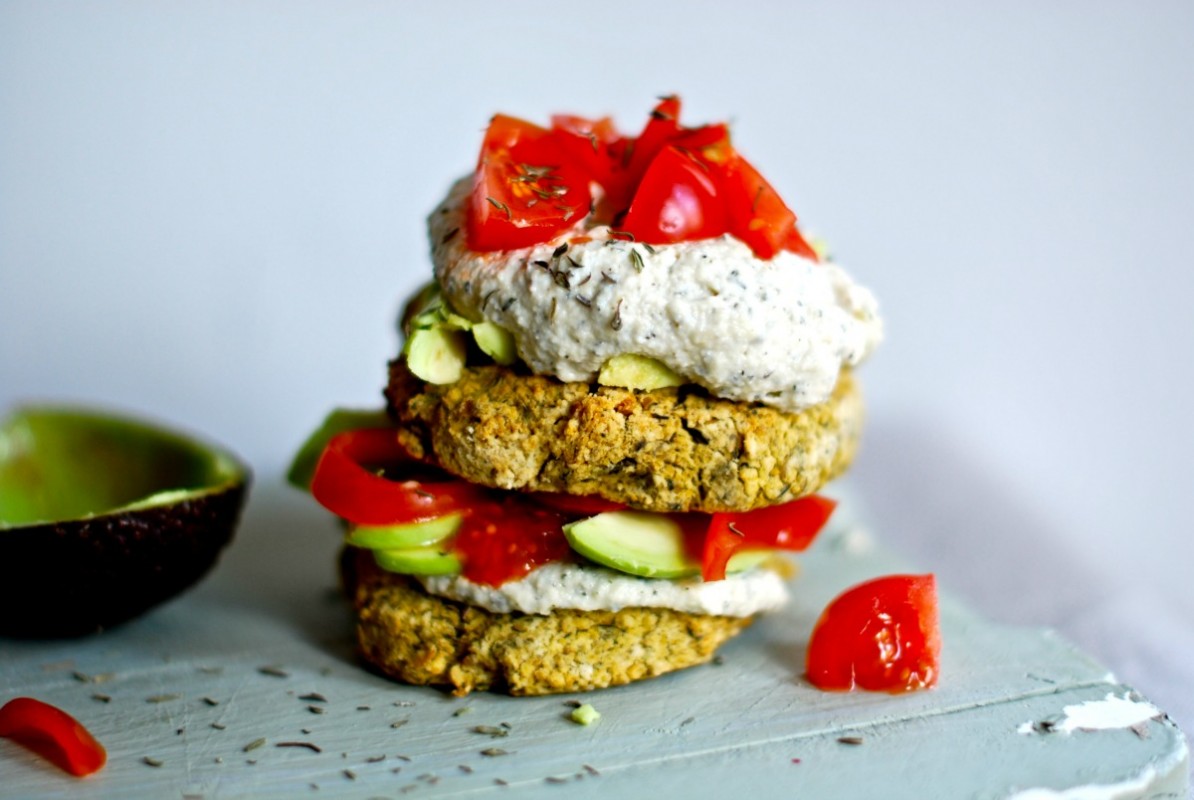 Artichoke hearts are perfect pizza toppings. Try this Artichoke and Olive Pizza and this Kale and Artichoke Pizza. When artichoke hearts are sautéed, they become creamy and spreadable, delicious on toasted bread for bruschetta. Or, toss them in a salad with Kalamata olives and sun-dried tomatoes for a Mediterranean treat. 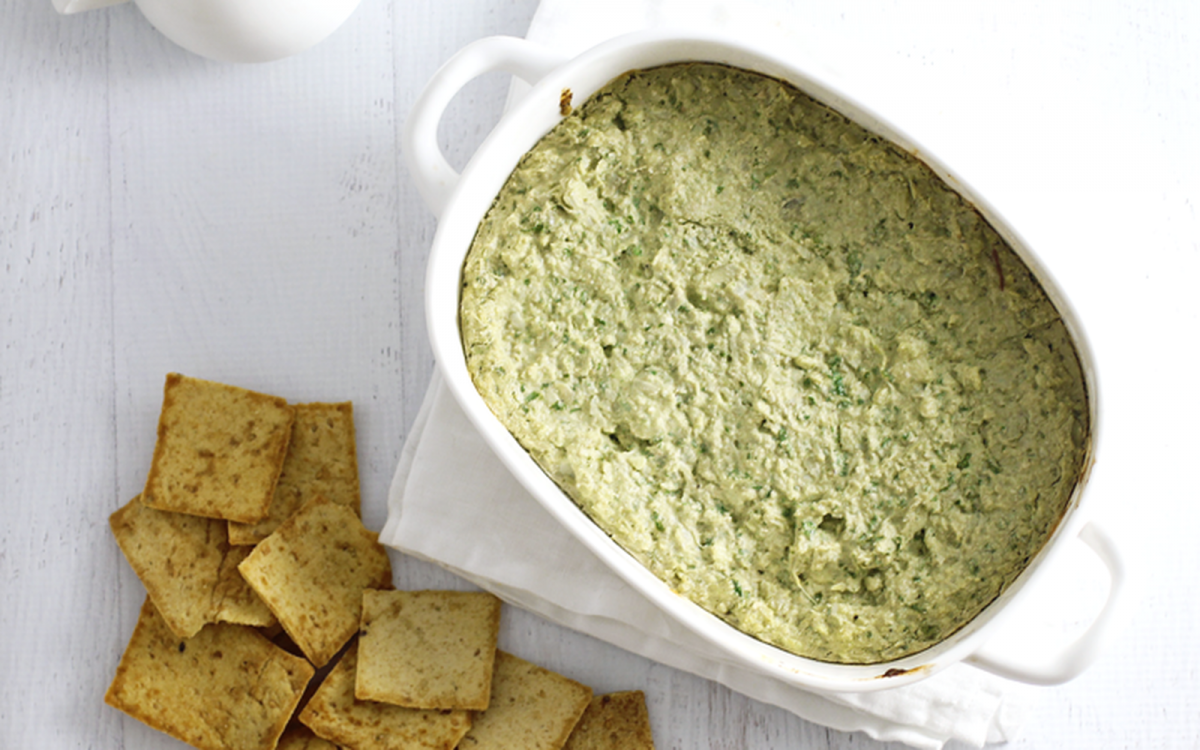 Spinach and artichoke are perfect together, like the savory version of peanut butter and jelly. Of course, the most classic use of this combination is to make the incredible dip that is a must at any party. Try this Hot and Bubbly Spinach and Artichoke Dip and Healthy Artichoke Dip. Get creative and swap out the spinach with a different green like this Cheesy Baked Kale Artichoke Dip, or use cauliflower and fire it up with this Buffalo Artichoke Dip.

Spinach and artichoke do more than just make great dips. Combine them to make this Spinach and Artichoke Soufflé, Artichoke and Spinach Risotto with Lemon Cashew Cream, and my Spinach, Artichoke, and Mozzarella Tofu Frittata.

Artichokes may look a little intimidating, but once you try cooking with them, you’ll see that they are well worth the effort. From the outer leaves to the sweet, tender hearts, make sure that artichokes are on your seasonal spring produce list.