Learn How to Braise Your Food for Maximum Flavor 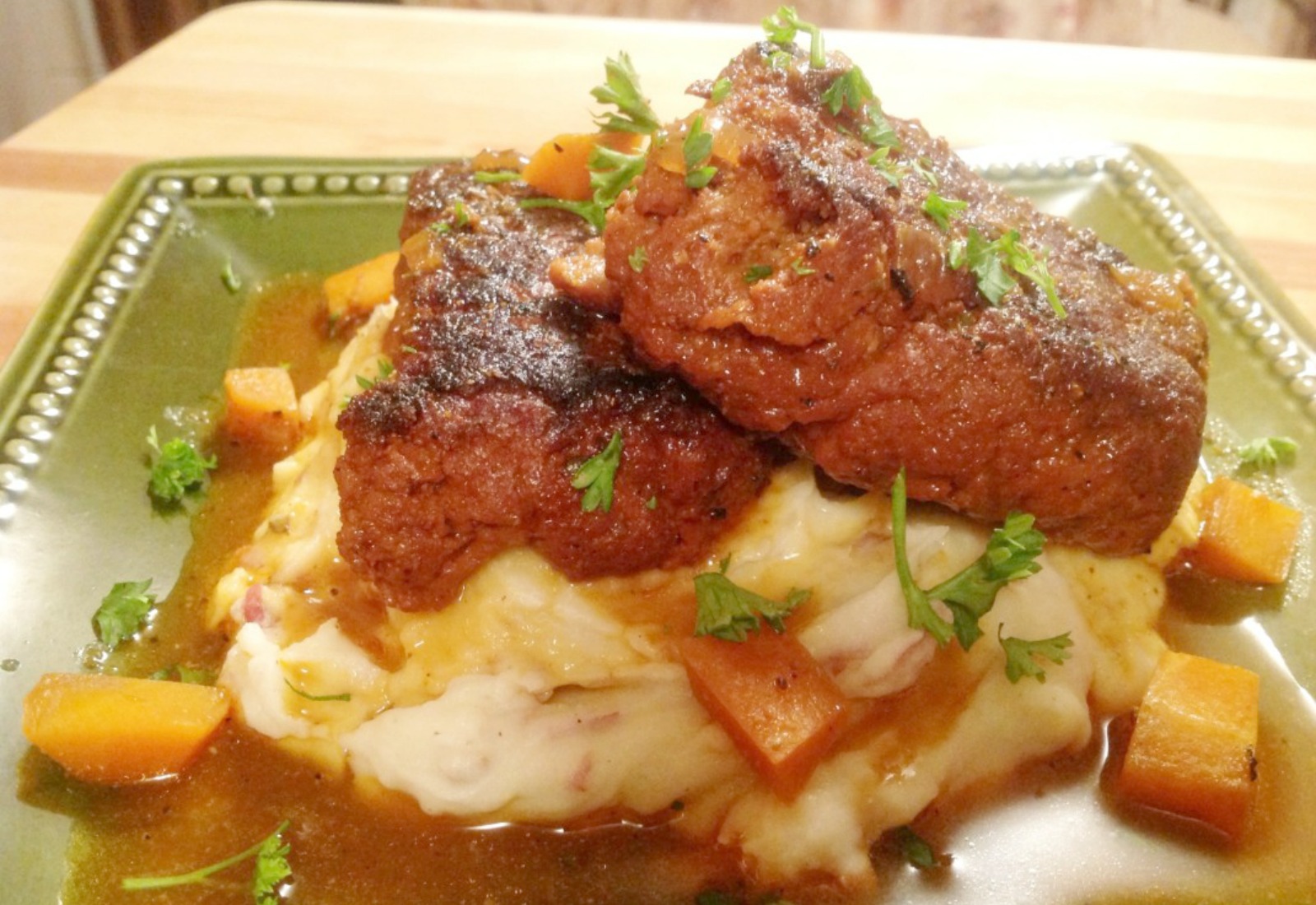 Talk about braising and most people will think you’re talking about meat. But braising isn’t just for meat. Braising is a great cooking method for tofu, tempeh, seitan, vegetables and even fruits. Dishes that are braised look elegant and complicated, but it’s really a simple process of browning food and cooking it in liquid until tender and flavorful. Braised food has deep, complex flavors and the braising liquid can be used as a sauce. If the idea of braised dishes sounds intimidating or you just need a few tips, here is everything you need to learn how to braise your food for maximum flavor. 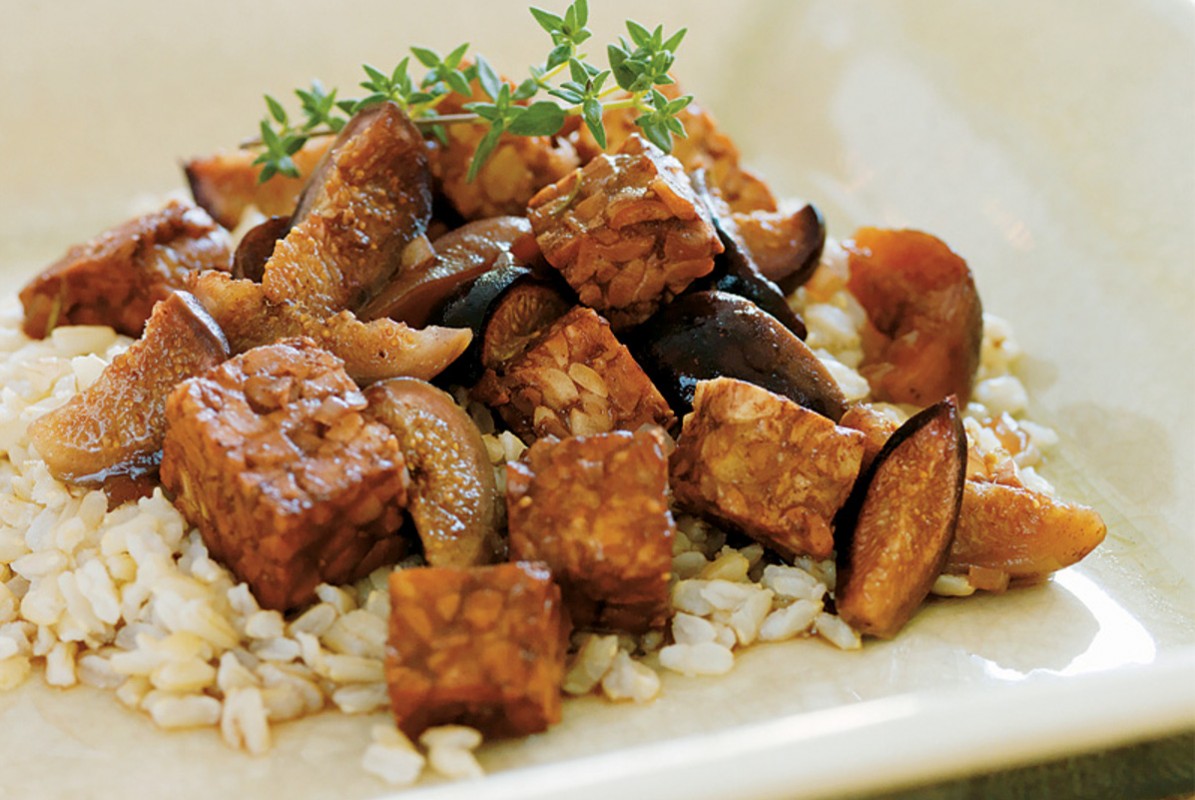 Braising is a cooking technique where the main ingredient is seared or browned in fat and then simmered in liquid on low heat in a covered pot. The cellulose in the veggies breaks down and you get tender vegetables with maximum flavor.

You can use a deep saute pan or skillet with a lid, a Dutch oven, pressure cooker or slow cooker. In this Slow Cooker Tempeh Braised with Figs and Port Wine, the tempeh soaks up the flavors of the wine, balsamic vinegar, broth and herbs for an amazing dish. Braising can be done in the oven or on the stovetop. After the food is browned and is braising, you don’t even have to pay much attention to it – just check it once in a while to make sure there’s enough liquid. You can make a whole meal in one pot so it’s also easy clean-up. 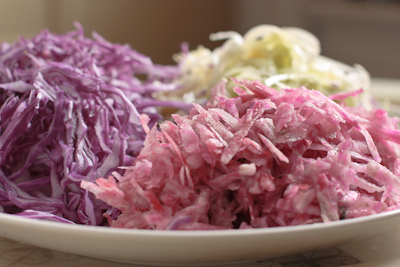 Pretty much any food can be braised but you want to choose hardy ingredients that won’t fall apart when cooked for a long time. Tofu and tempeh can also be braised and they will soak up the flavor of the braising liquid. When you braise seitan, you can turn a tough, chewy piece of vegan meat into a soft, delicate, melt-in-your-mouth indulgence. My Braised Seitan Short Ribs in Spicy Chile Sauce are tender to the point of almost falling apart. They cook in a sauce made from red wine, chile sauce, vegan Worcestershire sauce, “beef” broth, brown sugar and fresh herbs.

Beans and legumes, both dried and fresh, can be braised. Vegetables that are hardy enough for braising include carrots, potatoes, cabbage, leeks, parsnips, squash, kohlrabi, celery, fennel, sweet potatoes, sturdy leafy greens and onions. Beets and red cabbage are good choices for braising. In this Braised Red Cabbage with Beets, they are cooked in red wine with a hint of maple syrup. I braised kale with onion and garlic and served it with roasted sunchokes in this Roasted Jerusalem Artichokes with Garlicky Braised Kale. Fruits that are amazing when braised include apples and pears as in my Tofu with Apples and Onion Relish and Vegan Chicken with Onions and Pears in a Balsamic Reduction. Don’t choose foods that get mushy when moist such as broccoli or spinach.

3. How to Braise Food 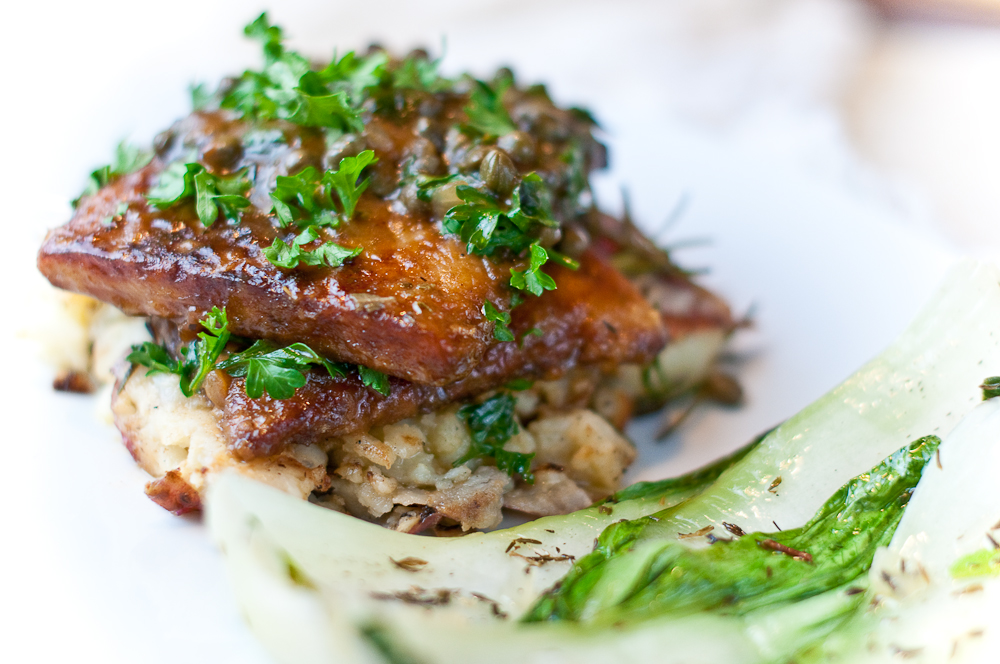 The basic directions for braising are as follows: heat oil or vegan butter in the pan. Cut whatever you are braising into same-size pieces with maximum surface area for browning. Season the food with pepper and whatever spices you are using except salt. Salt impedes the browning process. Arrange the food in the pan so that there is room between the pieces. If the pan is too crowded, the food will steam rather than brown. Saute the food in the pan on medium-high heat until it browns and begins to caramelize.

Once the food is browned, use a bit of liquid to deglaze the pan and scrape up any browned bits of food. Add your cooking liquid. This can be vegetable broth, water, vinegar, wine, or juice. In this Tempeh Piccata dish, the baby bok choy is braised in white wine and white miso. Food can also be braised in beer like this Braised Red Cabbage with Apples and Beer. You only want the liquid to come up to less than the half-way point of the veggies. If there is too much liquid, the food will just boil and steam. This is also when you add the salt and any other seasonings.

Cover the pan and either place in the middle rack on an oven at 300 degrees or keep on the stovetop over low heat. Cook just until the food is at your desired tenderness. Test it by sticking a paring knife into the food. If it goes in easily but the veggies are still firm, it’s done. You don’t want to overcook the veggies. When done, remove them from the pan. Reduce the liquid, uncovered, over low heat until you have a thickened sauce to serve over your braised food. 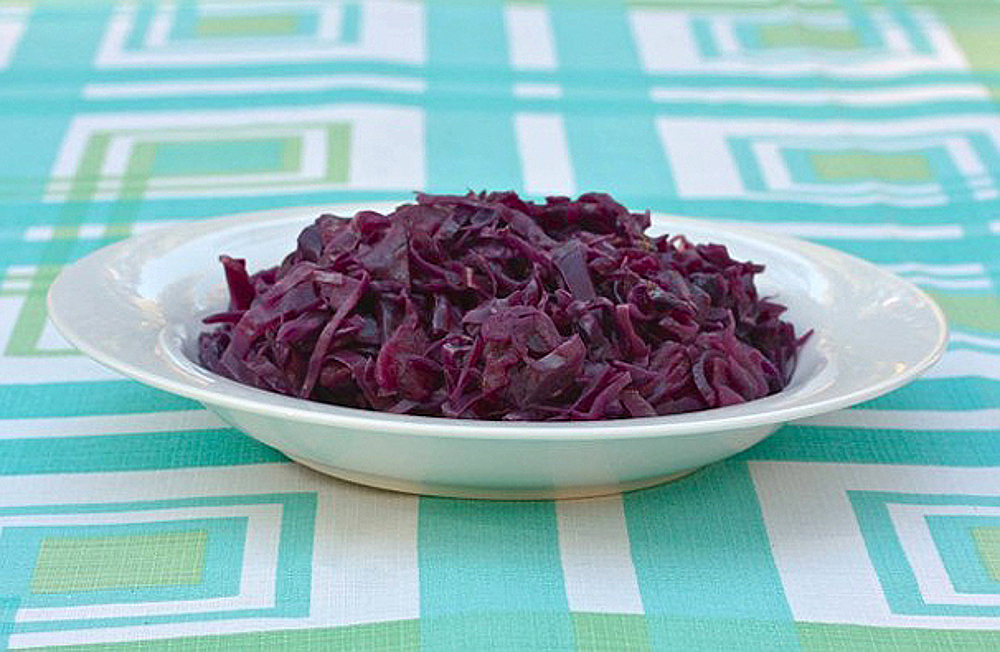 Now that you know what braising is and how to do it, here are a few recipes to get you started.

Braised Fennel, Carrots and Parsnips: slice 4 parsnips and 4 carrots diagonally into ½”-inch pieces. Cut 2 fennel bulbs into quarters, cut the core out and chop the fennel. Reserve the fronds. Heat 1 Tbs. oil in a deep saute pan and saute one chopped onion and 3 minced garlic cloves until softened. Add the parsnips, carrots and fennel to the pan and toss to mix with the onions. Add 1-2 cups vegetable broth, about ¼-inch high, and 1 tsp. dried thyme. Simmer covered for 25 minutes until the veggies are tender. Uncover and cook 5 more minutes. Garnish with the reserved fennel fronds.

Braised Turnips and Red Cabbage: Heat 2 Tbs. olive oil in a large saute pan that has a lid. Add four peeled and diced turnips and 1 head of thinly sliced red cabbage to the pan. Cook 6 minutes until the cabbage wilts. Add 1 tsp. mustard powder, ½ tsp. dill weed and ½ tsp. black pepper. Stir in ¼ cup apple cider vinegar and 1 cup water. Cover the pan and let the veggies braise for 20 minutes or until the turnips are fork-tender. Season with kosher salt to taste.

Braised Belgian Endive: Heat 1 Tbs. oil in a skillet over medium-high heat. Add ½ cup bread crumbs and 2 Tbs. fresh chopped parsley and toast until they are browned and crispy. Set aside. In a deep saucepan, add 1 Tbs. of oil and 1 Tbs. vegan butter. Cut 5 or 6 heads of Belgian endive in half, length-wise. Lay the heads in the pan, cut-side down. Cook the endive until it starts to brown, about 3 minutes. You may need to do this in batches depending on the size of your pan. Add 2 minced garlic cloves, 1 tsp. dried thyme, 1 cup vegetable broth and kosher salt and black pepper to taste. Cook for half an hour until the liquid evaporates, turning the endive every ten minutes or so. Transfer the endive to a platter and sprinkle with the toasted breadcrumbs.

Braised Celery: peel the stalks of a bunch of celery to remove the fibrous outer coating. Trim the ends of the stalks and slice them into 4-inch pieces. Reserve the celery tops for garnish. In a large skillet, heat 1 Tbs. olive oil over medium-high heat. Add 1 thinly sliced onion, 2 minced garlic cloves and the celery to the skillet and let it cook for 5 minutes, until the celery begins to soften. Add 1 cup of low-sodium vegetable broth and kosher salt and black pepper to taste. Bring the liquid to a boil and then reduce the heat to low and cover the pan. Let the celery simmer until tender, about 20 minutes and until most of the liquid has been reduced. Turn the celery halfway through. Transfer the celery to a serving dish and garnish with the reserved chopped celery leaves.

See, braising isn’t complicated at all. It’s a simple way of adding tons of flavor without having to stand over a hot stove all day. Try braising your favorite veggies today and see how amazing they turn out.