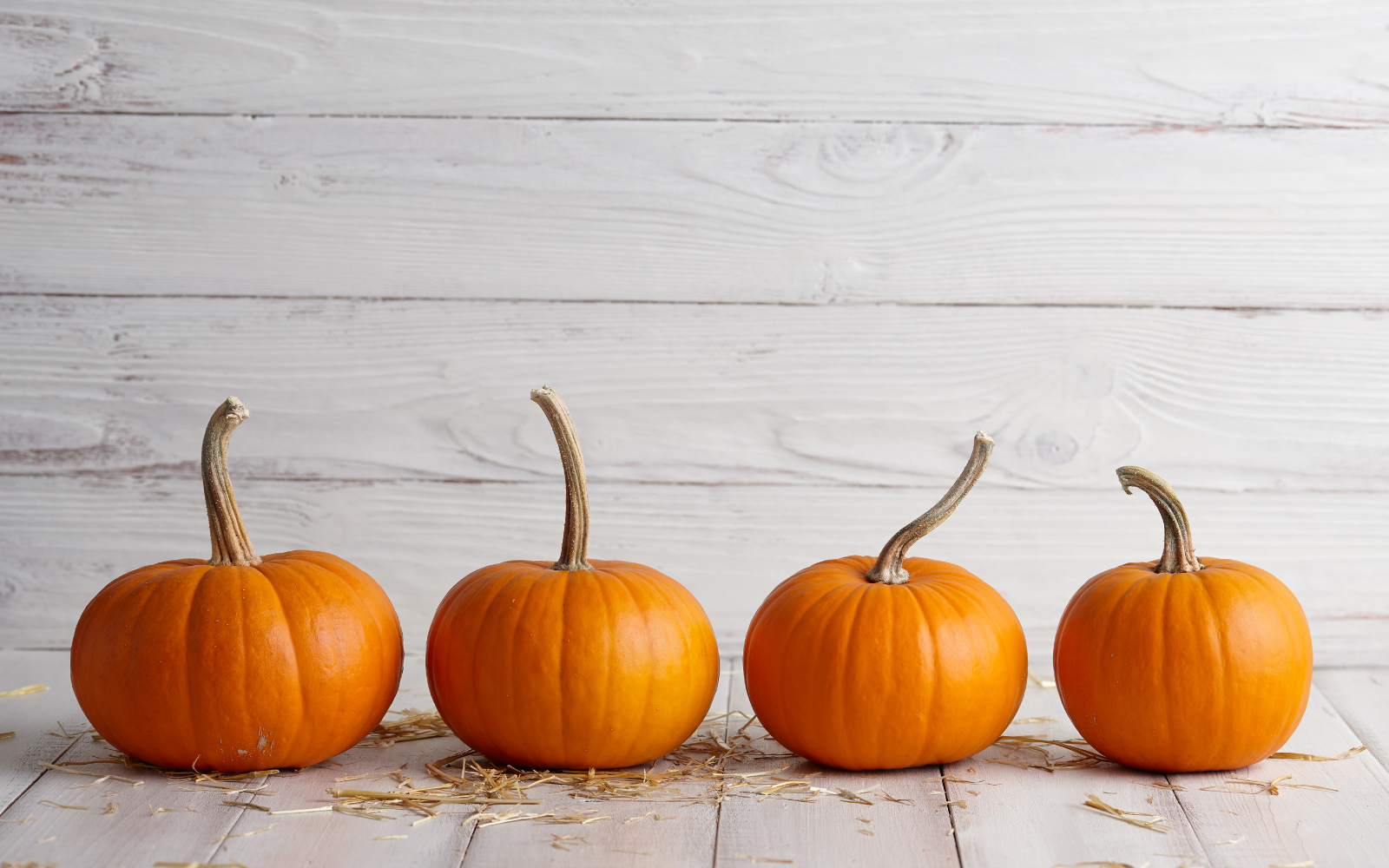 The pumpkin is one of the most recognized and favored seasonal vegetables. The arrival of this burnt orange, ribbed skinned squash in produce bins and at farmers markets hails the changing of the seasons and the coming holidays. Yet, the pumpkin’s origins, cooking versatility, and incredible health benefits are fairly unknown. From the Jack-o-Lantern on the doorstep to the baking dish in the kitchen, this cheery squash plays an integral role in both culture and health.

Pumpkins Through the Years

While their cultural heritage in the United States came from Britain and Ireland, where a tradition of carving vegetables into lanterns originated, growing pumpkins for eating is worldwide. Pumpkins are currently being cultivated globally on six of the planet’s seven continents. While the pumpkin’s origin country has yet to be identified, the oldest pumpkin-related seeds were discovered in Mexico and are dated between 7000 and 5500 BC. Therefore, theories circulate around both Mexico and North America as its origin country.

Even though the pumpkin is part of the squash family, it is also referred to as a cultivar, the “basic classification category of cultivated plants in the International Code of Nomenclature for Cultivated Plants (ICNCP).” Cultivated plants, as well as a few selected wild species, are designated under the term cultivar due to special characteristics that take place specifically during cultivation. We can thank the Greek philosopher and the proclaimed Father of Botany, Theophrastus, for this helpful classification.

Since that time, due mostly to the marketing of holidays such as Halloween and Thanksgiving, pumpkins have become one of the most popular crops in the states. Currently, 1.5 billion pounds of pumpkin are grown each year, a majority of these sprouting across farmlands in California, Illinois, Indiana, Ohio, and Pennsylvania.

Growing Your Own Pumpkin

Pumpkins grow both male and female flowers, which are fertilized in large part by honeybees. Originally, pumpkins were fertilized by squash bees, also referred to as Peponapis or Xenoglossia. Due to pesticide sensitivity, the population of squash bees has been dramatically reduced relegating the fertilization of pumpkins to the honeybees.

Pumpkin vines are aggressive with the ability to overtake an entire garden. With that said, the pumpkin plant, with the right care, is a great option for home or community gardens. While they are sensitive to cold weather, pumpkin plants are fairly independent and need minimal attention. Seeds are generally planted between late May and early July, depending on the climate, which allows for a harvest around Halloween. If you plan to grow your own, be aware of powdery mildew and squash bugs!

Plants are truly an essential part of any balanced diet. The practical magic of the plant comes down to its nutrient-rich design. As part of the squash family, pumpkins don’t disappoint! From better eyesight to cancer-fighting properties, the pumpkin is a powerhouse for any diet.

Pumpkins are high in dietary fiber and low in calories. For every half a cup of pumpkin, there are only 40 calories and yet 8 grams of dietary fiber. Pumpkin not only slows digestion via the dietary fiber, which also makes you feel full longer, but their low-calorie make-up means you can eat more of this delicious veggie. Dietary fiber not only stymies unwanted snacking, but it also “slows the rate at which sugar or glucose is absorbed by your body,” which stabilizes blood sugar levels and aids in avoiding unnecessary fat storage.

The key to a healthy heart is healthy eating. Incorporating pumpkin is a great way to reach that goal!

Pumpkins provide a natural source of heart-friendly vitamins such as C, E, and A, as well as magnesium and potassium. Dr. Stephen Sinatra of the Heart MD Institute elaborates on the importance of these essential vitamins stating that they “play a key role in keeping blood vessels flexible,” as well as improving circulation. On top of that, pumpkin seeds also have a large amount of healthy monounsaturated fats, which have been known to reduce inflammation and lower the risk of diabetes, both of which help lower the overall risk of heart disease.

While most of us are aware that carrots help with eyesight via beta-carotene, it’s not as well known that pumpkins do just the same!

Beta-carotene, a pigment that gives plants their color, is broken down by our bodies into vitamin A. About 200 percent of the daily recommended vitamin A can be procured from just one cup of cooked and mashed pumpkin. Along with improving eyesight, beta-carotene protects the skin from ultraviolet sun rays. Much like sunscreen, beta-carotene works from the inside out as a shield helping to keep the skin and eyes young and healthy!

When it comes to preventing and fighting cancer, one of the most important weapons is antioxidants. Antioxidants — vitamins, minerals, and flavonoids — are found in fruits and vegetables, red wine, teas, and supplements and are essential for protecting your body against many medical conditions.

Pumpkins are chock-full of beta-carotene, which is found in vitamins A and C, and which also happens to be a powerful antioxidant. While antioxidants don’t attack cancer itself, they block your cells from damage caused by free radicals, therefore lowering your risk for certain cancers.

While there are thousands of ways to cook pumpkin, many of which can be found on the Food Monster App, below are a few hand-selected pumpkin recipes for both the holidays and every day.

Pumpkin Alfredo With Spinach and Corn 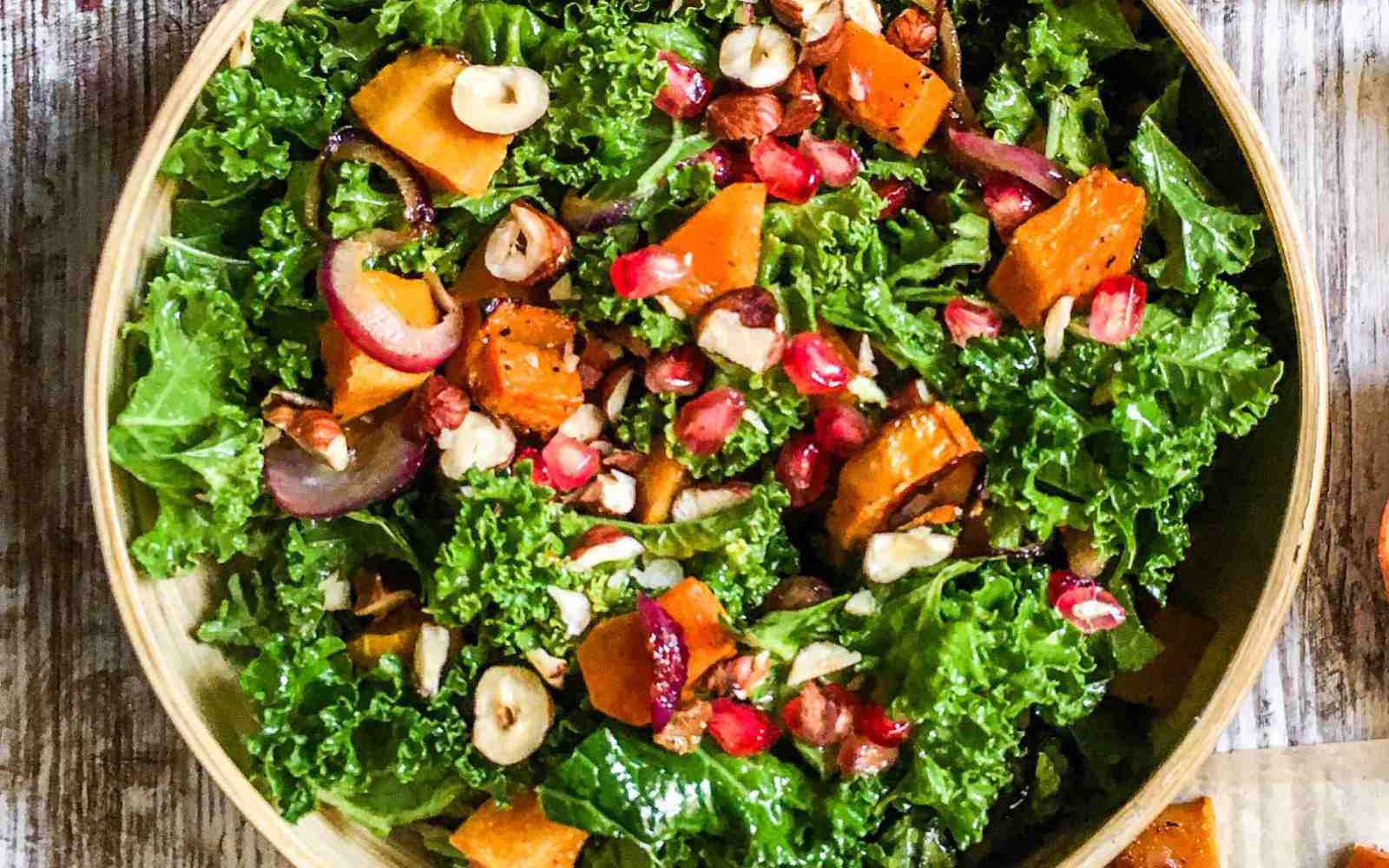 Kale is widely recognized as one of the healthiest vegetables on the planet, the leafy green packed with essential vitamins including vitamins A, K, C, B6, manganese, calcium, copper, potassium, and magnesium. As part of the cabbage family, kale has a crunchy and tough texture and offers a satiating bitter bite. This Kale and Pumpkin Salad by Maria Llamas is perfect for a power lunch or energizing dinner. It offers a plentiful bounty of nutrient-rich raw kale and pumpkin, a dash of sweet pomegranate seeds and agave syrup, and a hearty, yet sour, mustard-based dressing. 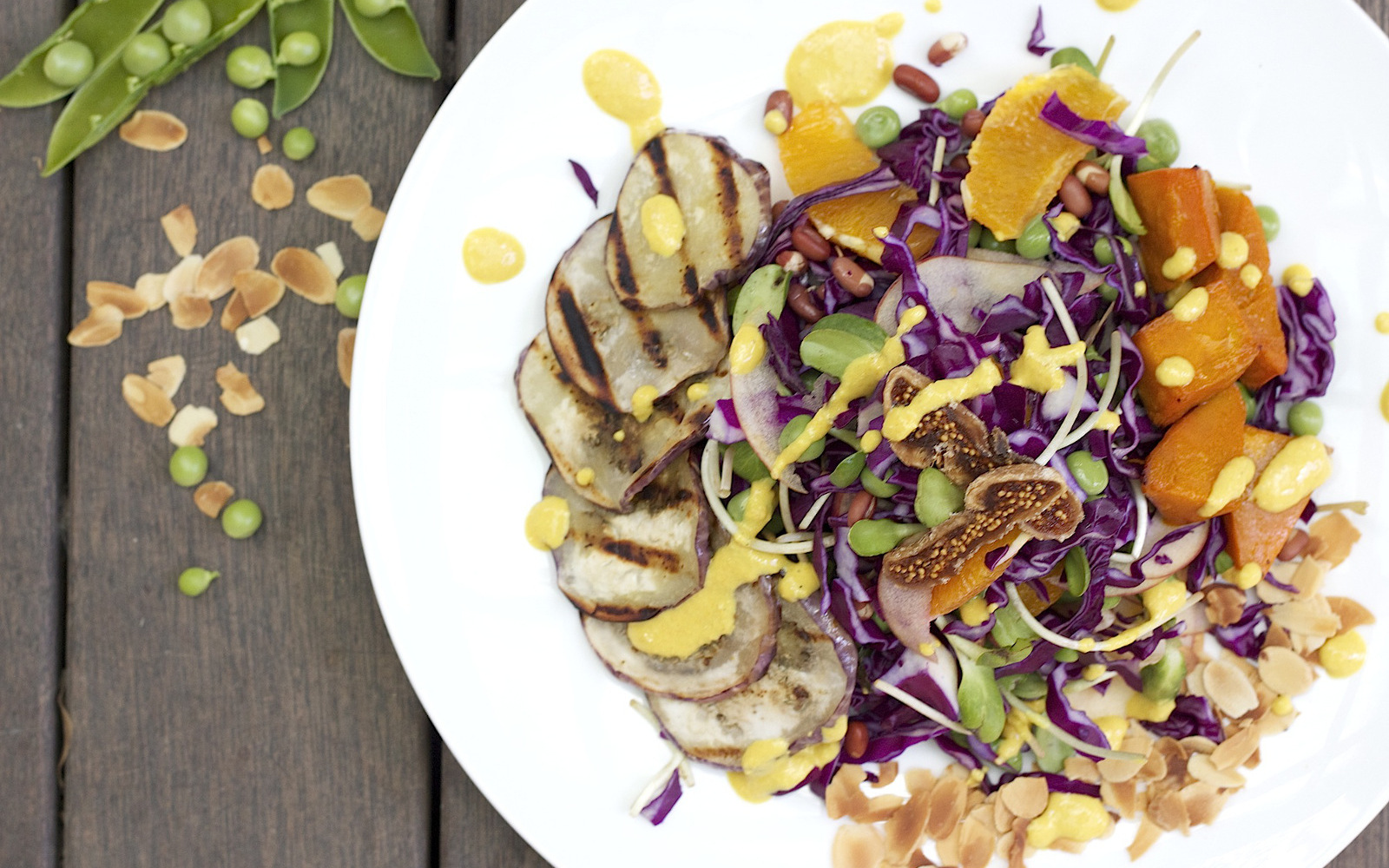 Simple, yet creatively nutritious, this Grilled Pumpkin With Spinach Cauliflower Pesto dish by Simona Malerba is a great example of how easy it can be to incorporate pumpkin into your diet. While pumpkin is meaty, it is also a fast griller. Start with the pesto, which uses the cruciferous cauliflower and rich spinach as a base, then move on to the grill. Adding a little bit of char to pumpkin gives it a smoky and meaty flavor that can be a great filler to any dish! 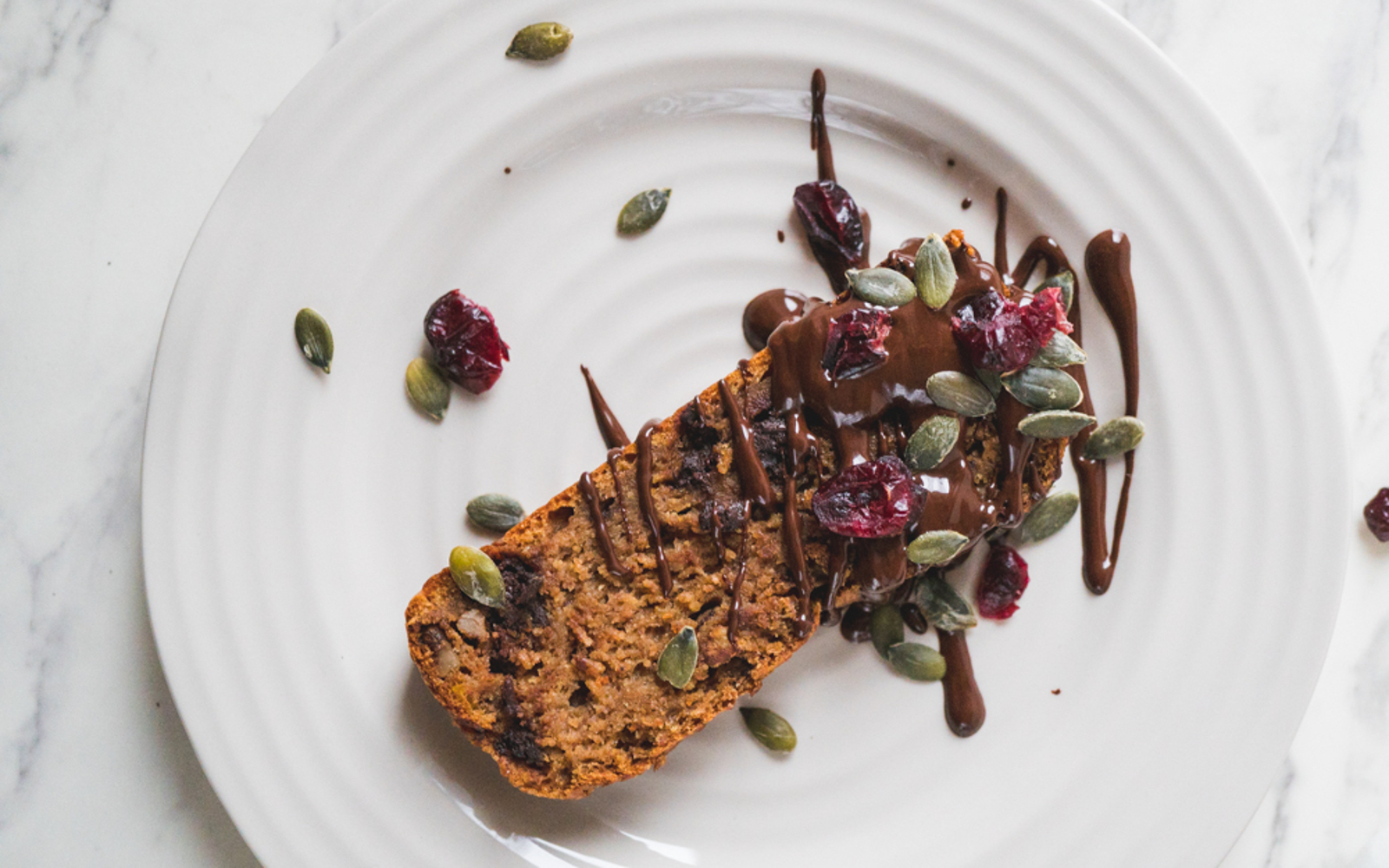 Pumpkin is a holiday staple, as well as a favorite for the cold winter months. This year, take your traditional pumpkin bread recipe one step further with this Chocolate Walnut Pumpkin Bread vegan specialty by Laine Rudolfa. This dish adheres to strict vegan rules by using spelt flour, non-dairy milk, flaxseed eggs, and vegan dark chocolate. Sweetened with coconut sugar and topped with a vegan dark chocolate-cranberry drizzle, this pumpkin bread will quickly become a seasonal favorite!

Holiday sweets don’t have to be chock-full of sugar. These Butternut Energy Bites by Natalie Yonan can be served next to your favorite treats, offering a delicious and healthy alternative. These buttery bites make the list due to their nutrient-rich base of raw coconut shreds, butternut squash, pumpkin, chia, and sunflower seeds, and fresh ginger.

This Pumpkin Pie With Coconut Whip and Candied Walnuts recipe by Gabrielle St. Claire is a vegan take on tradition. This dish doesn’t sacrifice flavor, yet incorporates healthy and vegan alternative ingredients. Its rich and sweet flavor relies heavily on coconut oil, milk, and sugar, which also offers a great source of healthy fat. While the sweet undertones rely on coconut products, this pie is all pumpkin with 14 ounces of pure pumpkin. 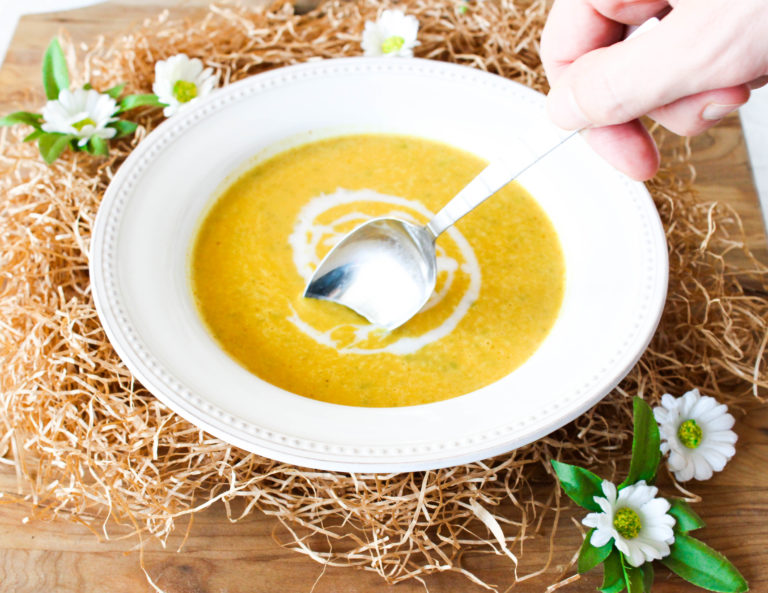