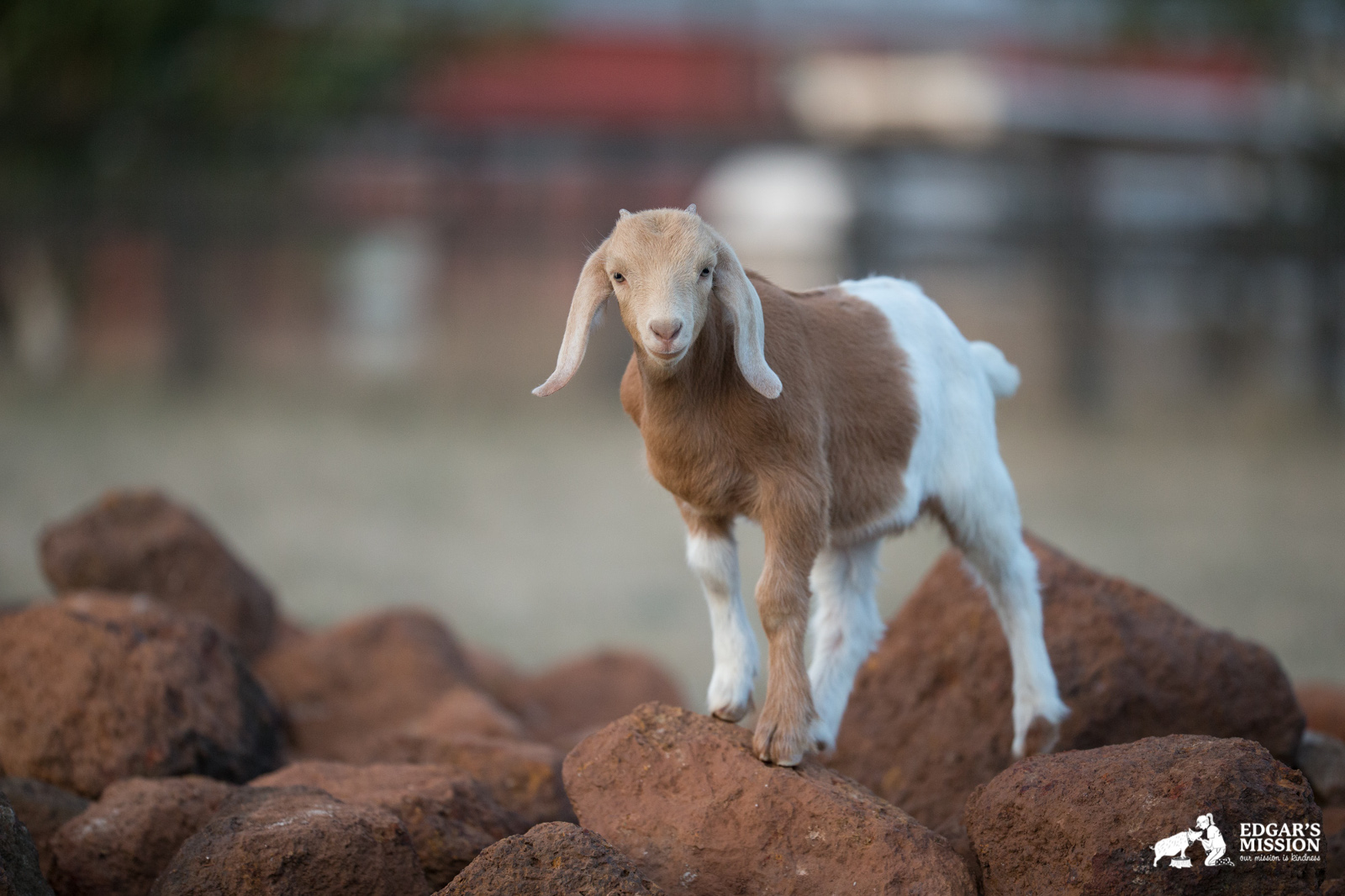 The bond between mother and child is not often recognized or respected in the world of animal agriculture. As animals become “commodities” to turn a profit for producers, they are completely stripped of their unique personalities and denied the basic ability to express behaviors as nature intended. The fact is, billions of farm animals across the globe are subjected to the cruel and inhumane industry that is factory farming, and because we never get a chance to see farm animals as anything other than “dinner,” we are perfectly unfazed by the incredible torture that they must endure to make this possible.

However, when we set aside our preconceived notions that farm animals are non-feeling beings who are incapable of understanding their own suffering, and look at these animals as individuals, suddenly these perceptions change. Goats are a prime example of farmed animals who are marginalized and categorized as “dumb,” insignificant beings. But if we take a step back and actually get to know a goat, or many goats, we find that this is far from the truth.

Many people avoid learning more about the animals they consider food because they fear that in doing so they will be inspired to change. (We know, how terrifying.) But when are you put face to face with the story of two goats, like Antoinette and Chrissy, it becomes inordinately difficult to ignore the truth any longer.

First There Was Antoinette

Antoinette was rescued by Edgar’s Mission Farm Animal Sanctuary in Australia along with two other goats who were rescued from the meat industry. The popularity of goat meat is on the rise in Australia (and sadly, in the U.S. as well), and it is believed that Antoinette was used as a breeding goat, meaning many of her offspring were likely sent to slaughter in her lifetime.

While the conditions that Antoinette and her two other rescued goat friends had endured before coming to Edgar’s is unknown, we are certain that when they arrived at the sanctuary their lives improved for the better.

Edgar’s Mission has a strict no-breeding policy, as their goal is to provide a life-long home for animals in need, not to proliferate their already existing animal population. However, soon after her arrival it was discovered that Antoinette was pregnant!

Goats are highly intelligent and emotional animals, they also make wonderful mothers. Even after years of separation, a mother goat will remember her baby’s call, illustrating the deep bond shared between these dynamic beings. Knowing this, we can only imagine the pain that Antoinette could have experienced in the past after hearing the call of her baby, only to see them taken away from her forever.

But now that she is in the care of Edgar’s Mission, Antoinette will never have to experience this suffering again. Antoinette gave birth to a little female kid, named Chrissy, in December and the pair have been inseparable ever since. 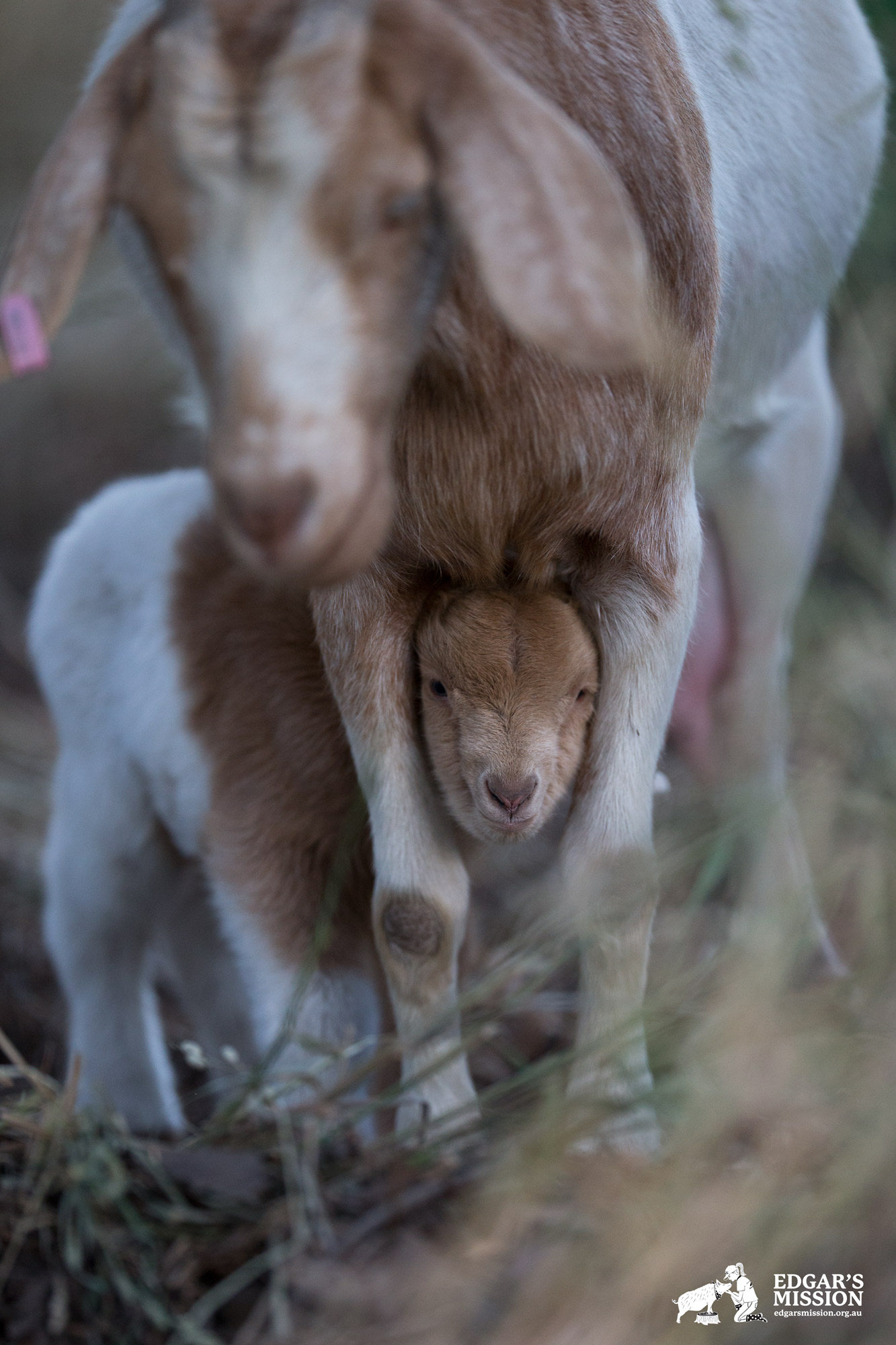 “Born to mum Antoinette, just a few days after Christmas, little Chrissy has already managed to capture hearts aplenty with her enormous ears, her cheeky smile and her adorable antics,” explains Pam Ahern of Edgar’s Mission. 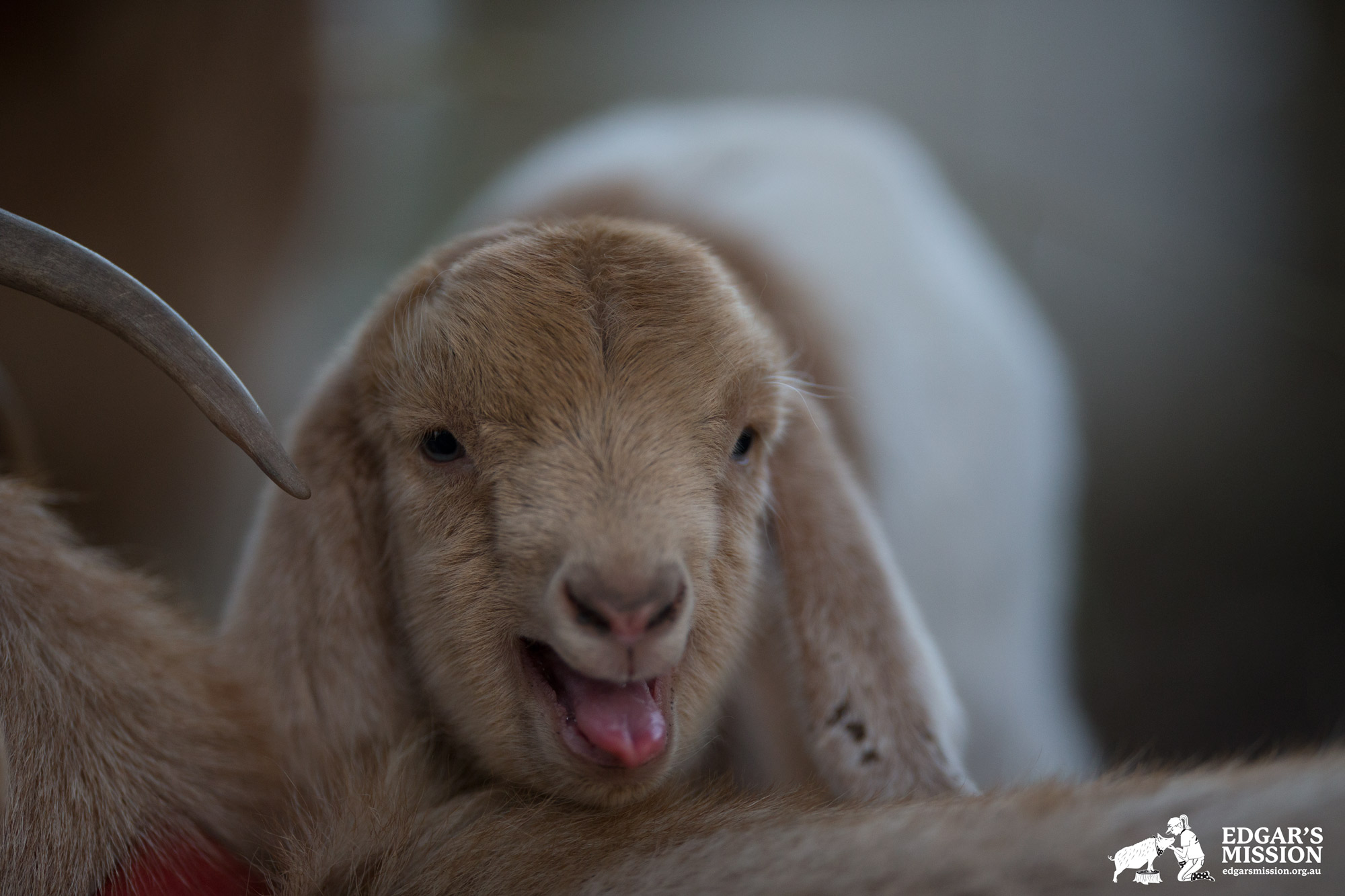 After so many years, Antoinette has finally gotten the chance to keep one of her babies and enjoy all the wonders of motherhood. “Mum Antoinette is as doting as any mother could ever be,” Ahern tells One Green Planet, “with the patience of a saint as her dear little girl merrily ‘jump jumps’ about the place, takes off at breakneck speed around their paddock for seemingly no reason and can spy a slightly ajar gate from a mile away.” 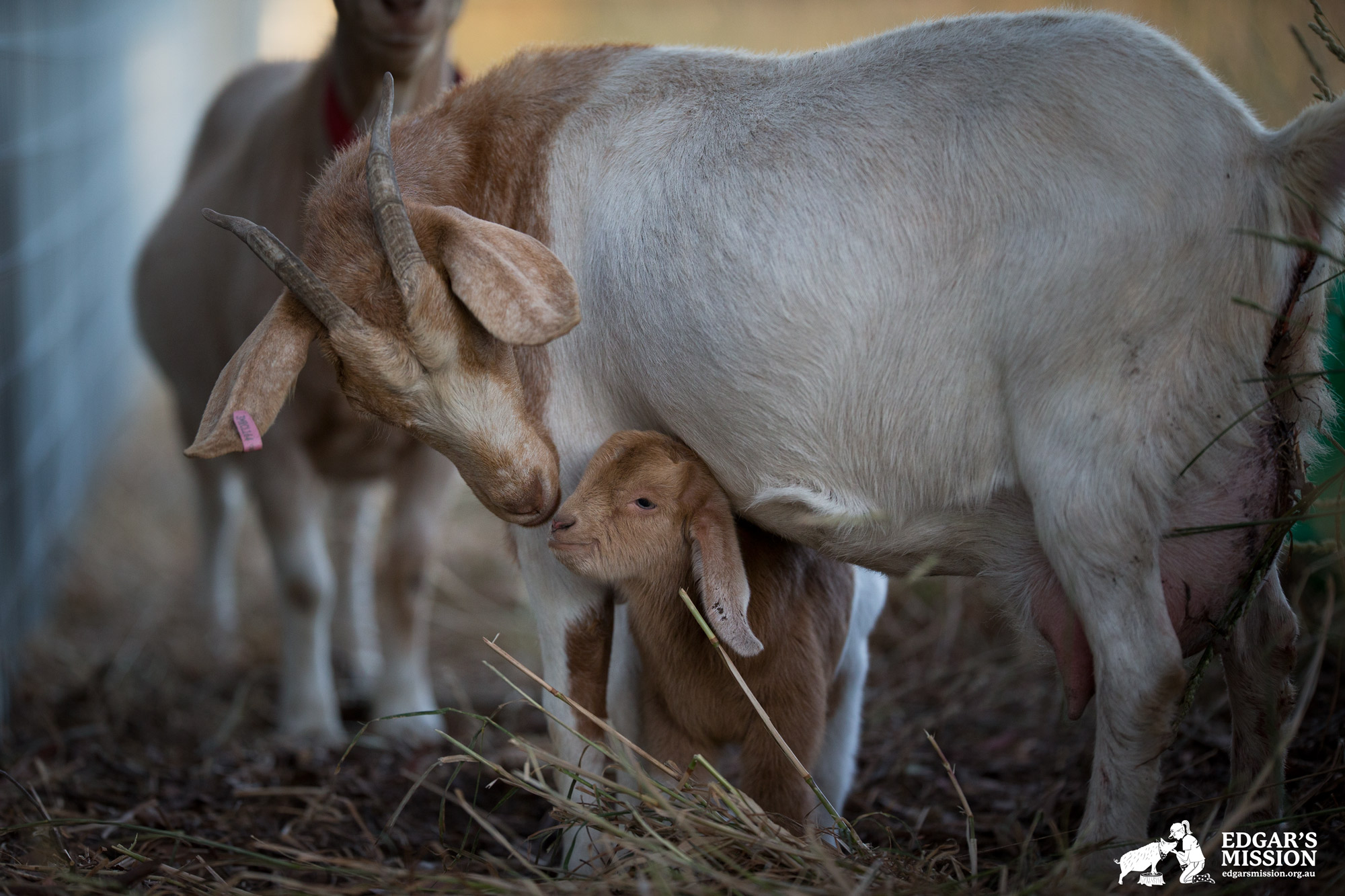 There is no denying that Chrissy is quite the handful. Baby goats are notorious for “just wanting to have fun,” and fun is certainly what Chrissy has had while at Edgar’s. She has recently taken to climbing on her human caretakers back! Due to their intelligence and problem solving abilities, goats have been known to climb onto the tallest limbs of trees to reach food … maybe Chrissy has learned that her food comes from these humans, so by climbing on them she’s really just following her natural goat instincts. 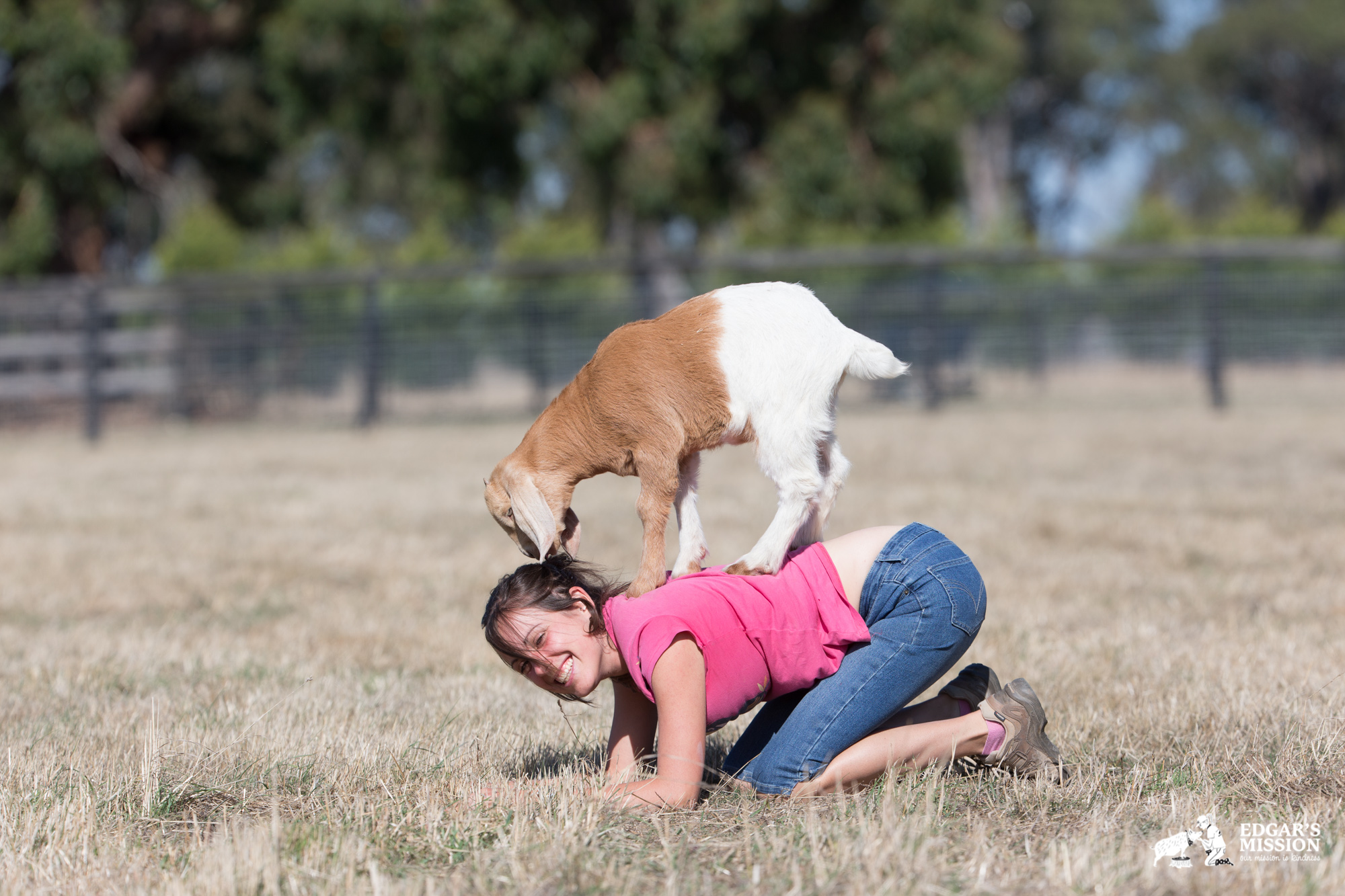 But no matter how far Chrissy jumps or climbs, she always comes running when she hears the sound of her mother’s bleat. Just like human mother’s and children, goats have specific calls for one another that allows them to always know when one wants the other. Even though she loves to look for trouble and play, it is clear that Chrissy’s favorite way to spend her days is to cuddle up with her mom.

Hope for Other Goats

“The joy that Chrissy has already brought to the sanctuary in her time on this earth reminds us of the kindness that is inherent in all human hearts,” says Ahern. “It took many kind hearts and kind acts for Chrissy’s mother Antoinette to find her way to our sanctuary and if just one person throughout this chain of kindness had not acted upon their instinct, dear Chrissy’s story could have been a starkly different one.”

If it weren’t for farm sanctuaries, like Edgar’s Mission, Chrissy and her mother could have easily become statistics in the animal agriculture industry. However, because some kind individuals saw these animals for the living, feeling beings they truly are, they have been given an entirely different experience of life. Chrissy has been shielded from the life in the meat industry that Antoinette has known too well and as a result, she will grow up never knowing the pain, stress and suffering that many other kids like her will sadly have to face.

“Here Chrissy is and here she will stay, determined to make the very most of her one precious and joyous life. And, it seems, she is intent on making sure we all do the very same.”

We can all learn from Chrissy and be inspired to share the joy and compassion that she has instilled in so many hearts. We all have the power to see farm animals for who they are, rather than what they can be to us and make choices that reflect that. By removing ourselves from the vicious cycle that is the animal agriculture industry, we can help more animals, just like Chrissy and Antoinette, experience the freedom and love they deserve.

As Edgar’s Mission’s motto reads, “If we could live happy and health lives without harming others … why wouldn’t we?”