How to Order a Vegan Pizza From Any Delivery Store 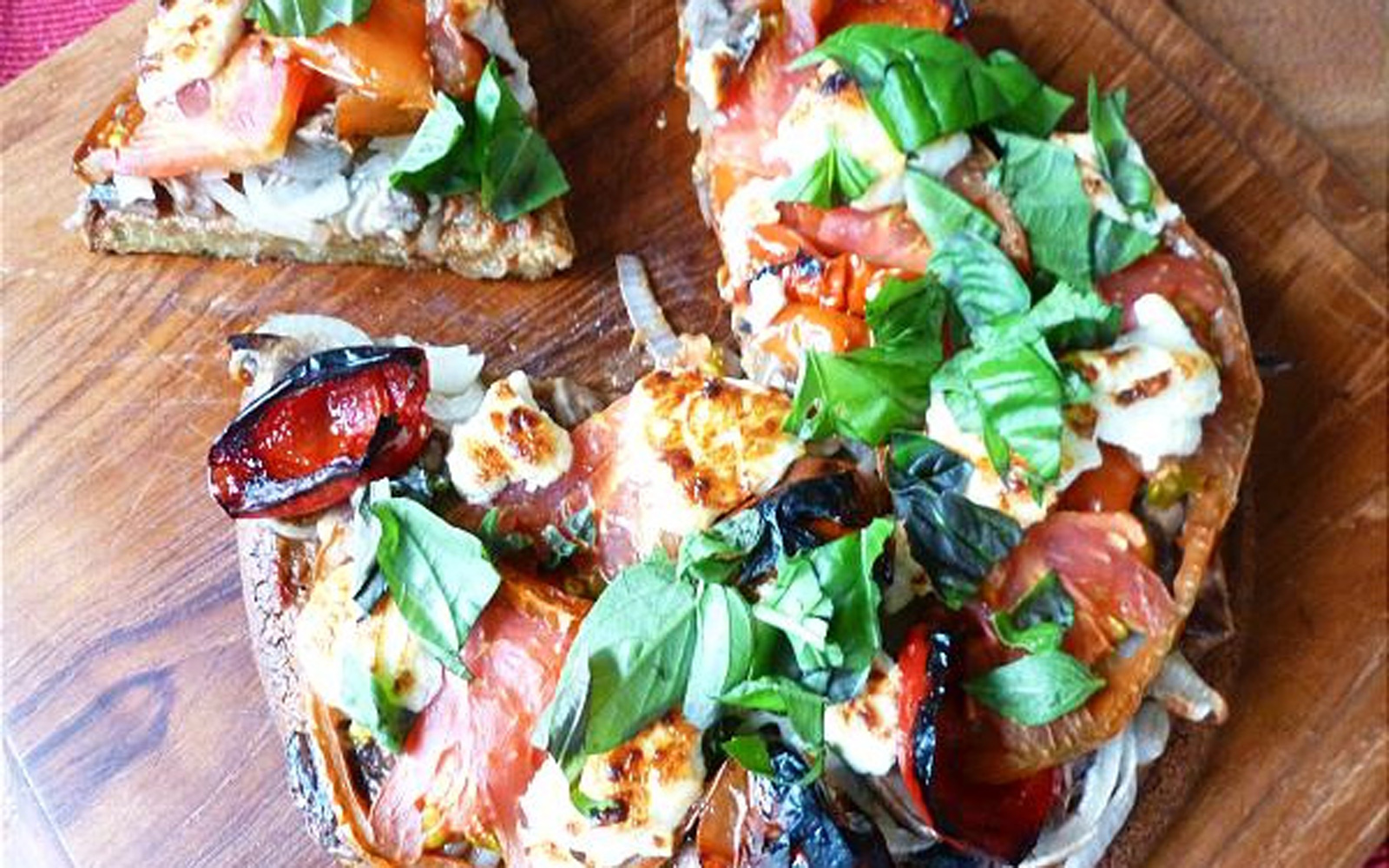 When I became vegan, many of my previously favorite foods were suddenly off the menu. Did that include pizza? Well, yes and no. Pizza, the way I had always eaten it – with extra cheese and pepperoni – was out, but I found that I could still order pizza from most of the stores I had always gotten it from. Today there are many pizzerias that have kept up with the times and put plenty of vegan options on their menus including pizza with vegan cheese and tofu. But when can’t get to one of those specialty places and you want to have a pizza delivered from the local pizzeria or chain store, how can you be sure that it’s vegan? Let us give you some tips on how to order a pizza that is vegan, delicious and on its way to your door in no time!

1. What Makes a Pizza Vegan…Or Not?

You might think that ordering a vegan pizza is as easy as requesting they leave the cheese off, and that may work some of the time, but the truth is, sometimes the crust and/or the sauce may contain animal products. That came as a surprise to me since the crust should just be flour, yeast, water and salt, and I couldn’t think of any reason why the sauce wouldn’t be vegan. However, some places use honey in the crust to activate the yeast and some put parmesan cheese in the sauce. That means you have to inquire as to whether the crust and sauce are free of animal products. If they are, then you are good to go, and your biggest decision will be which toppings to order.

Choosing toppings is the most fun part of ordering pizza. When I became vegan, I thought I would never like pizza without cheese, but it turns out I think pizza is better without it. There are so many delicious choices for toppings and without the cheese covering them up, you can actually taste them. Pizza places usually have long lists of veggie topping choices. Skip the meats and cheeses and choose from artichoke hearts, roasted red peppers, fresh basil, green olives, broccoli, pineapple, broccoli rabe, spinach, eggplant, tomato, roasted garlic, sun-dried tomato, zucchini, mushrooms, sauteed onions, sliced red onions, jalapeno peppers, banana peppers, and black olives.

Some stores may offer marinated tofu and vegan cheese. Read the list of gourmet or specialty pizzas. Many stores make pizzas with specific toppings that appeal to certain tastes. For instance, my local pizza place has a pie called “Nuevo Vegetarian” which has soy mozzarella, marinated tofu, broccoli, artichoke hearts, roasted red peppers, black olives, spinach, garlic, onions and tomato sauce. Sounds delicious, doesn’t it? Just make sure that each of the toppings is not cooked with any cheese or other animal products; sometimes greens may be cooked with pork for flavor.

Besides pizza, there are other items on the menu that may be vegan-friendly. Look for salads, steamed or sauteed vegetables, garlic knots, and pasta dishes like spaghetti or ziti. Again, be sure to ask about ingredients as some foods may be breaded or brushed with egg or milk or cooked with meat or cheese.

There are a lot of chain stores that sell and deliver pizza. Unlike local pizzerias, chain stores must all consistently use the same ingredients for each product in every store. That means you should be able to find their menus and product information online or at least an email address where you can contact someone to inquire about ingredients and vegan options. More and more of these chain stores are recognizing the demand for vegan products and offering more plant-based options. Here are some of the most popular chains and their vegan offerings (check online or ask in person as menus change without notice):

The chain offers vegan soups, salads and appetizers; they also offer seven types of pizza with a Neapolitan crust that is vegan when you leave off the cheese.

The Pizza crust and sauce is vegan, and they offer many veggie toppings. They also offer salads that can be made to order.

The thin crust pizza is vegan, as is the original pizza sauce. They offer many veggie toppings, as well as salads. Domino’s has launched a vegan pizza in Israel. Maybe the U.S. will be next? Let them know we want one!

Their pizza crusts, both regular and gluten-free, are vegan as is their red sauce. They have a large list of veggie toppings. They offer vegan cheese and tofu.

The original dough is vegan, but the thin-crust is not (it contains dairy). The sauce is vegan and they have a Garden Fresh Vegetarian Pizza which can be made without the cheese.

The crust and sauce is vegan; starting in spring of 2014, they offer a dairy-free, vegan-friendly pizza called “the Pianta,” which has spinach, chestnut mushrooms, pine kernels and artichokes on a spicy Arrabiata base. They also have dough balls that are vegan without garlic butter, a superfood salad (without the cheese) and raspberry sorbet. They invite customers to bring in their own vegan cheese in a sealed package.

Offers 2 vegan cheeses along with a lot of veggie topping options, the sauce and doughs are vegan. They also make gluten-free vegan brownies!

The Thin n’ Crispy and dessert crusts are vegan, as are the all-natural Old World and Sweet pizza sauces. They also have veggie toppings.

5. Add Your Own Toppings at Home

Whenever I order a pizza for delivery, I know I’m going to “doctor it” when it arrives. It’s probably not hot by the time it gets delivered, so at the very least, I will want to reheat it. While waiting for the pizza to be delivered, preheat the oven to 450 degrees. It only needs a few minutes to get reheated and crispy. You can also add your own toppings. Got homemade vegan Italian sausage? Slice it up and add it to the pizza. Add your own vegan mozzarella or grated parmesan. Make the pizza hearty with baked tofu, grilled tempeh or sliced seitan. Topping the pizza with your own chopped vegetables will not only ensure they are fresh, but it will be less expensive than ordering toppings from the store.

6. Don’t Be Afraid to Speak Up

Whenever you go to a restaurant or are ordering for delivery, don’t be afraid to ask questions. You are a paying customer and you have a right to know what you are buying. Inquire as to the ingredients in the menu items. If they are not vegan, be polite and let them know you don’t consume animal products. Ask them to consider adding more vegan options to their menu. If restaurants don’t know there is a demand, they will not supply vegan options. Let them know you will be a repeat customer (as will your friends when you spread the word) if you can order vegan dishes. Suggest brand names of vegan cheeses and meats as they may not be familiar with them. As plant-based eaters, there are always opportunities to educate others in a kind and friendly way.

7. Make Your Own Pizza

Getting pizza delivered is always fun and convenient, but it’s also fun to make your own pizza. Invite friends over and have a pizza-making party with lots of different sauces and toppings. For crusts, try The World’s Healthiest Homemade Pizza Crust, Quinoa Pizza Crust, Cauliflower Pizza Crust or this Gluten-Free Pizza Base. Sauce it up with My Mom’s Marinara Sauce, Spicy Red Wine Tomato Sauce, Creamy Cauliflower Alfredo Sauce, Vodka Cream Sauce or Pesto Sauce. Can’t live without the cheese? You don’t have to. Plus you can make your own vegan cheese. Top your pizza with Fresh Moxarella Cheese, Pepper Jack Cashew Cheese, Smoky Pesto Cashew Cheese or this Smoked Coconut Gouda that melts! For a delicious and decadent pizza, spread this Spinach Artichoke Dip on the pizza crust. Check out 27 Vegan Pizzas Will Blow Your Mind for more ideas and recipes.