10 Ways to Cook With Eggplant 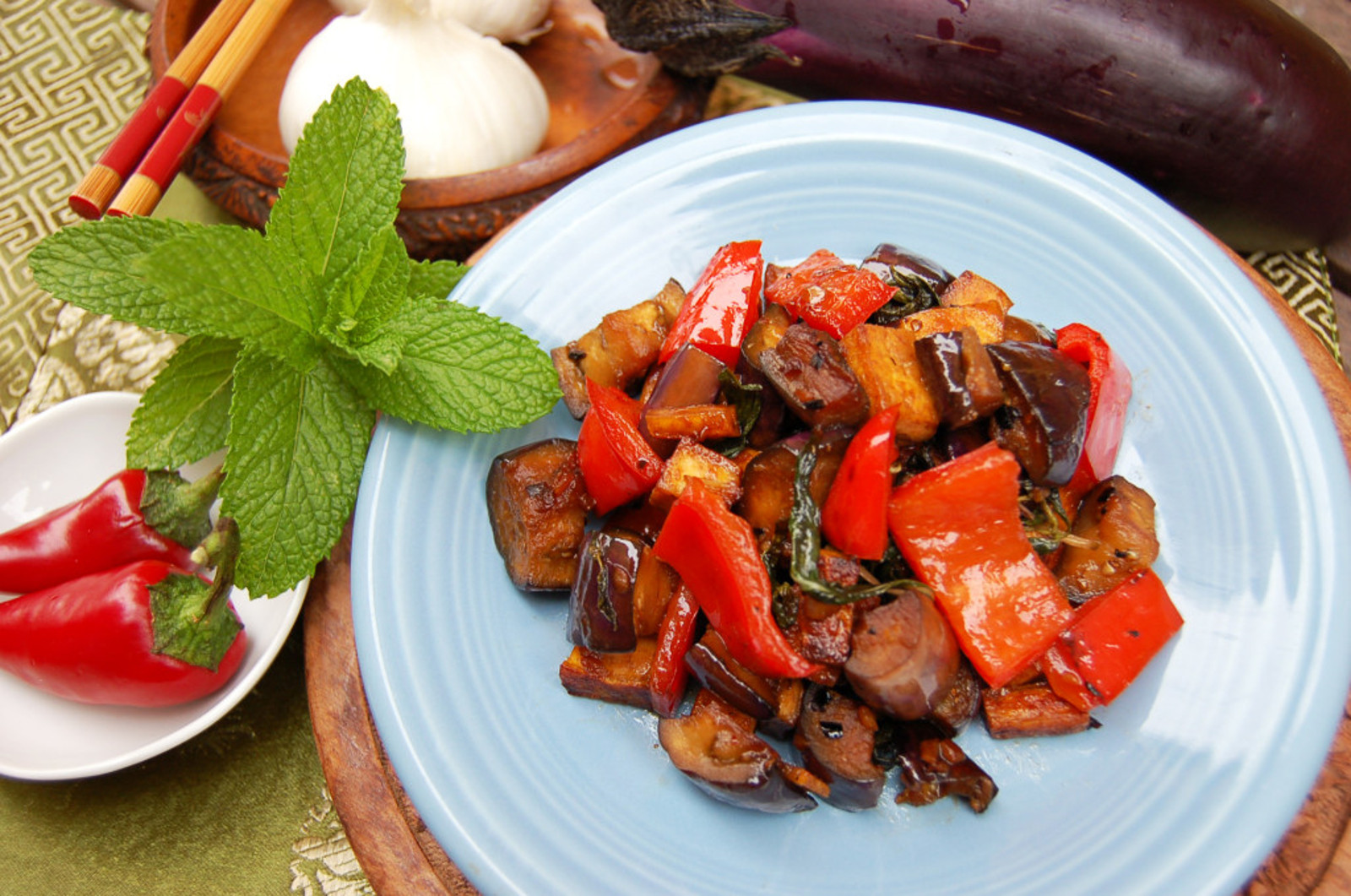 Sometimes when I sit down to write my articles, I worry whether I will be able to think of ten ways a certain vegetable can be cooked. Today, however, I am worried how I will limit myself to just ten ways to cook with eggplant. Looking through my recipes alone, I found over twenty eggplant dishes I have made, so now I am not only motivated, but hungry. Eggplants, which have their peak season between July and September, are so satisfying with their creamy texture and meaty flavor.

They are also really healthy as they are filled with antioxidants, fiber, vitamins and minerals while being very low in calories. Did you know there are 5 types of eggplants? There are tender baby eggplants, mild Asian eggplants, the familiar purple globe eggplants, the sweeter heirloom white eggplants and the very cool-looking graffiti eggplants. Each one has distinct characteristics that make it most suitable for specific recipes. And speaking of recipes, let’s get started with some tantalizing ways to use the gorgeous, versatile eggplant.

It only makes sense to start our recipe journey of eggplants with appetizers and meal starters. Eggplant is light enough to make a delicious first-course dish, while rich and flavorful enough to be completely satisfying. When eggplant is roasted, it becomes creamy, rich and perfect for dips and spreads. One of my favorite eggplant dips is Baba Ganoush (plus I love the name!). Just combine roasted eggplant with roasted garlic, tahini, lemon, cumin, cayenne and salt in a food processor and you have a decadent dip you will have to try not to eat by the spoonful.

Indulge in exotic flavors with this Moroccan Grilled Eggplant, Onion and White Bean Spread. Indian flavors make this Baigan Bharta or Char-Roasted Eggplant Dip spicy and delicious. Or, try this Spicy Eggplant Caponata for the Italian delights of red pepper flakes, garlic, tomatoes, capers and Kalamata olives. Eggplant appetizers don’t have to be dips and spreads, however. You can have all the fun of pub food with my Eggplant Fries with marinara dipping sauce. They are crispy on the outside and incredibly creamy on the inside. It is my duty to warn you: they are addictive.

One of the best soups I have ever made was a Roasted Eggplant Bisque. It was creamy, velvety and rich. To make it, roast an eggplant cut into halves along with some halved tomatoes and half a dozen garlic cloves. While they are roasting, saute some onions in a large soup pot. Add the roasted veggies to the pot along with thyme, cumin, oregano and red pepper flakes. Add broth, bring to a boil, and then let simmer for an hour. Blend the soup with an immersion blender, add ¼ cup non-dairy milk or cream and bring it back to a simmer. Season with salt and pepper and garnish with vegan grated parmesan, fresh basil and diced tomatoes. Trust me, this soup is amazing. Eggplant is also perfect for salads, light but satisfying. Try this Kale Salad with Grilled Eggplant, White Beans and Fresh Figs.

We all know that zucchini and carrots can be made into noodle shapes, but did you know that you can also use eggplant as a veggie-based noodle? Yes, you can! When I want to make a noodle-free lasagna, I simply slice an eggplant into thin, ¼-inch thick long slices and use them in lieu of the lasagna noodles. They soften in the oven just like the pasta does but they don’t fall apart so they work perfectly to keep the layered structure of the lasagna. Try this recipe for a Gluten-Free, Vegan, Noodle-Free Lasagna. If you’re handy with a spiralizer, try your hand at making these spaghetti-shaped Eggplant Noodles.

Nothing says comfort like a warm bowl of rich, hearty stew. Eggplant is a perfect ingredient for stews because even though it softens, it doesn’t fall apart when cooked for long periods. Stews, while satisfying, do not have to be heavy. Two of my favorite eggplant stew recipes are actually quite low in calories, though rich in flavor. My Ratatouille Stew is a big pot of eggplant, zucchini, yellow squash and bell peppers cooked in a rich garlicky tomato sauce with a salty and tangy kick from red pepper flakes, capers and green olives. Chickpeas add a crunchy texture to the stew.

When I’m craving an Indian stew, I combine eggplant, zucchini, carrots, potatoes and cauliflower with the fragrant spices of curry, ginger, garlic, coriander, cumin and garam masala. Topped with chickpeas, this Indian Vegetable Stew is delicious alone or over rice or quinoa, but our favorite way to eat it is wrapped in Chickpea Scallion Crepes with a dollop of vegan sour cream or non-dairy yogurt. For a raw stew, try this Moroccan Vegetable and Chickpea Stew with Spicy Orange Cauliflower Couscous.

Eggplant might not be the first vegetable that comes to mind when you think about making burgers or meatballs but it should be. When eggplant is roasted or sauteed until it is soft and creamy, it is the perfect vegetable to form into patties or balls (with the help of some flour or bread crumbs). This Baked Eggplant Burger is savory, filling and addictive. My Eggplant Crunchburger with Horseradish Mustard Mayo is the ultimate vegan burger. It is stuffed with vegan cheese and topped with potato chips for a fun, crunchy texture. For a Greek twist, try my Moussaka Burger with Béchamel Cream Sauce.

It’s a play on the classic eggplant and potato dish turned into a delicious and decadent burger. Just as you can make burgers out of eggplant, you can also make meatballs with them. After all, meatballs are sort of like little, round burgers. My Vegan Mozzarella-Stuffed Eggplant Meatballs are fun and easy to make. The eggplant gets a crispy crust when fried and when you bite into them, you are rewarded with ooey-gooey vegan mozzarella. These eggplant meatballs are perfect for subs, sandwiches or atop a big pile of spaghetti.

Speaking of spaghetti, eggplant is a very popular ingredient in Italy. One of my favorite Italian eggplant dishes is Baked Eggplant Parmigiana. Eggplant parm is probably one of the first dishes people think of or eat when they go veg. I choose to bake my eggplant rather than fry it when I make my parmigiana. I top it with marinara sauce, vegan mozzarella and fresh basil. Another favorite Italian dish is Eggplant Rollatini. I make a Spinach Tofu Ricotta and roll it up inside baked thin slices of eggplant. Put the little rolled-up treasures into a casserole dish, cover it with marinara sauce and vegan mozzarella and bake until the cheese melts.

Sometimes I use sauteed spinach and artichoke hearts rather than tofu ricotta to make a rollatini that is a play on spinach artichoke dip. Other times I cover the eggplant wrap with another wrap of Swiss chard for a beautiful, green rollatini. A Sicilian pasta dish named after the opera is Penne alla Norma which I veganize by sautéing cubes of eggplant with garlic, diced tomatoes and non-dairy cream. After seasoning with thyme, basil, salt and pepper, it gets tossed with penne and vegan mozzarella for a creamy and indulgent dish.

When I first became vegan, Chinese was the most common way I ate eggplant, besides Italian. My local take-out place made a dish that I tried to replicate, cooking cubed baby eggplants in a combination of chile sauce and tamari. A favorite Indian eggplant dish I make has cubed eggplant sauteed in chile-coconut yogurt sauce with onion, garlic, ginger, tomato paste, brown sugar and a blend of fragrant Indian spices. Another Indian eggplant dish you can try is this Bitter Melon, Potato and Eggplant Indian-Style Stir-Fry. My recent experiments with cooking Thai food led me to make a Thai Green Curry Eggplant with Basil. It has cubed eggplant cooked in a green curry sauce and coconut milk and topped with 20 fresh basil leaves. It looks, smells and tastes amazing. Use Japanese eggplants to make this incredible Stir-Fried Thai Basil with Eggplant and Tofu.

A thick, juicy steak does not have to be made out of meat. Eggplants can be sliced lengthwise into slabs that can be seasoned and grilled to make a healthy and satisfying meal. I love making Mediterranean Grilled Eggplant Steaks. Cutting each eggplant into 4 thick steaks, I season them with salt and pepper and cook them on a grill pan. While they are cooking, I saute roasted red peppers, garlic and spinach, adding nutmeg and Kalamata olives after the mixture is removed from the heat. Each eggplant steak gets topped generously with the spinach/pepper/olive mixture, topped with a few bread crumbs mixed with olive oil and parsley and then baked until the crumbs are browned and crispy. I usually serve this with a side of zucchini “pasta.” Eggplant steaks can also be made by roasting thick slices of eggplant after seasoning them with a mix of garlic, cumin, coriander, curry, turmeric, salt and garam masala. This is the perfect accompaniment for any Indian dish.

If I could have my choice of any hero right now, I would want an Eggplant Parmigiana hero. Vegan, of course, as the grilled eggplant slices would be covered with marinara sauce and vegan mozzarella, layered on Italian bread and put under the broiler to melt the cheese. Or maybe I would choose an Eggplant and Spinach Panini with grilled eggplant slices, fresh baby spinach, and vegan mozzarella on Ciabatta bread, pressed into a thin sandwich. Of course, there is also this Roasted Eggplant Sandwich with Caramelized Onions served with crisp greens on whole wheat buns.

Eggplant may be award-winning as the headliner, but it also gives an amazing performance when it’s part of a larger cast. Grilled eggplant rounds are one of my favorite pizza toppings especially with marinara sauce and fresh basil. In this Eggplant, Pesto and Mushroom Pizza with Tofu, the eggplant is marinated in a mix of tamari, olive oil and maple syrup. Eggplant is paired with rice, Purslane and peanuts to make this colorful and flavorful Eggplant and Purslane Pilaf. For an exotic experience that combines Middle Eastern flavors with a touch of Greek and Turkish ones, try eggplant in this Legendary Middle Eastern-Style Vegan Bake.

Whew! I knew I would have trouble limiting myself to just 10 ways to cook eggplant; there are over 30 ideas here. But who can blame me? When you have a vegetable like eggplant that can be sauteed, pureed, grilled, roasted, fried, sliced, diced, and cubed, and that can be used with almost any ethnic flavor profile and can make incredible appetizers, soups, salads, entrees and more, the possibilities are as endless as they are mouthwatering.