How to Make Your Own Spanish Food at Home 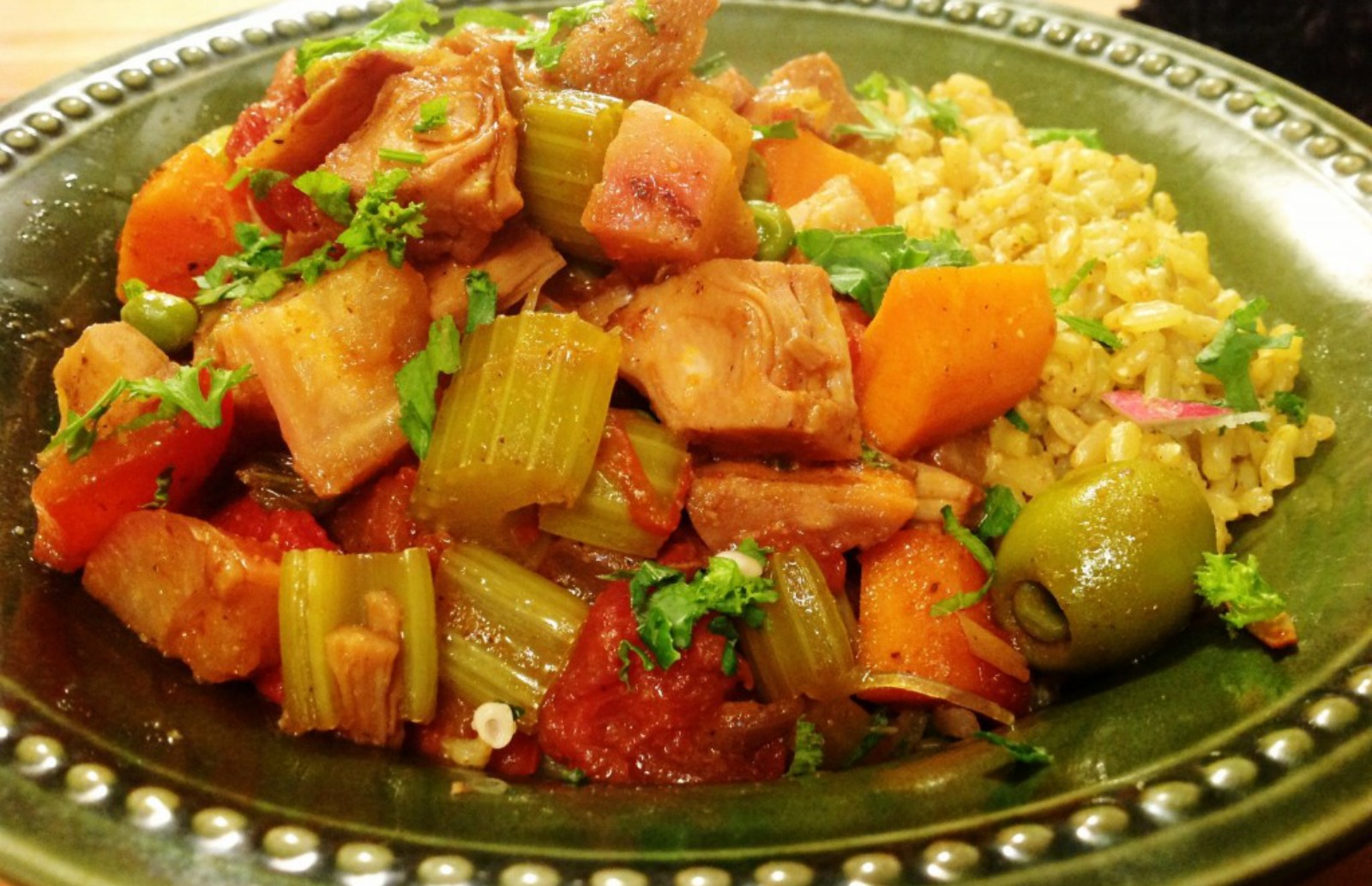 All cuisines with rice and spice make me happy, and among them, Spanish cuisine is at the top of the list. I was introduced to Spanish cuisine back in college when I dated a guy whose family came from Spain. One of the first things I learned was that while the term “Spanish food” gets used as a blanket statement, Spanish cuisine differs greatly from the others that get included under that blanket. For instance, even foods that share the same name, such as tortillas, are vastly different in Spain than in other countries. Spanish cuisine is often defined by the local availability of ingredients and regional crops. The foods and recipes are a testament to the long and rich history of Spain. The dishes are filled with fresh foods, tons of flavor and the pride of their people. Let’s take a look at Spanish cuisine and see how we can enjoy this style of cooking in our vegetable dishes.

1. Use Aromatics, Herbs and Spices

We start with herbs and spices, because they are what can make the same basic ingredient taste unique. Every culture has its own ethnic flavor profile, and knowing which herbs and spices to use can help us make flavorful Spanish dishes.

The three main herbs used in Spain are rosemary, thyme and oregano. Spanish paprika or pimenton is an integral spice in Spanish cuisine. Spanish paprika can be spicy or sweet, smoked or not. Saffron, the most expensive spice in the world, is the spice that makes rice yellow. Spain also uses cayenne pepper, garlic (lots of garlic), onions, cloves, nutmeg, cinnamon, mint, parsley, sage, bay leaf, basil and vanilla.

Spanish recipes are often cooked in olive oil, as olives are grown all over southern Spain. Learn how to infuse your own olive oil with herbs and spices for even extra flavor.

Contrary to what many people may think, cilantro is not used much in Spanish dishes. Spain garnishes their dishes with parsley. In fact, parsley is used so much in Spain that markets give it away!

In Spain, tortillas, known as Tortillas Espanola, are basically omelets or frittatas made of eggs, potatoes and onions. You can make your own vegan Spanish-style tortillas by taking any vegan omelet recipe and filling it with fresh veggies and Spanish spices. Cook this Silken Tofu Omelet or this Chickpea Flour Omelet with Spinach, Onion and Bell Peppers in Spanish olive oil and flavor it with paprika, garlic, rosemary and parsley. Alternatively, you can make a delicious Spanish-style Vegetable Frittata for your next brunch and impress your guests.

One of the best-known Spanish dishes is paella, which is rice mixed with seafood, chicken, sausage, vegetables, paprika and saffron. Paella was originally a dish cooked over an open fire on farmland in the countryside. The ingredients used were whatever was available, so it varied dish to dish. I love to make paella with rice, vegan sausage, tofu and lots of vegetables. Instead of saffron, I use turmeric to give the rice that golden yellow color. Try this authentic recipe for Artichoke Paella and understand why this paella is such a popular dish.

Beans and legumes are a staple of Spanish food, particularly in stews. You might not think of chickpeas when you think of Spanish food but chickpeas are an important ingredient in many Spanish dishes. In the winter, it is common to make stews with chorizo, sausages, vegetables and chickpeas. I like to make a simple but flavorful dish of Espinacas con Garbanzos or spinach and chickpeas that are cooked in an almond paste sauce.

Over medium-high heat, heat 2 Tbs. olive oil in a large saucepan with a lid. Add 1 cup of day-old bread cubes and 12 raw almonds. Cook until they are browned and crispy. Add 4 minced garlic cloves, 1 tsp. ground cumin, 1 tsp. paprika, ¼ tsp. black pepper and a pinch of cayenne pepper. Toss the bread and almonds with the spices and cook 1 minute until fragrant. Transfer the ingredients to a food processor and add 2 Tbs. red wine vinegar. Process until it becomes a thick paste. Return the paste to the pan and add in 2 cups cooked chickpeas and 1/3 cup tomato sauce. Mix everything so the chickpeas are coated in sauce. Add ¼ cup of water to make the sauce looser. Wilt in 3-4 cups of fresh spinach, adding it in batches and mixing it with the chickpeas. Season the dish with a pinch of nutmeg and kosher salt.  Taste for any seasoning adjustments that may be necessary. Serve with an extra drizzle of olive oil on top and crusty bread to dunk in the sauce.

Similar dishes that also have potatoes are this Warm Potato Salad with Spinach and Chickpeas and Chipotle Sweet Potato and Black Bean Chili. For a tasty tapas, make these Roasted Chickpeas with Chipotle and Lime.

Spanish food is filled with fresh vegetables, especially peppers, eggplant, zucchini, tomatoes and potatoes. Chile peppers or pimientos are a big part of Spanish dishes. They are dried and ground into paprika, sauteed with garlic and onions, roasted and stuffed or just eaten raw. Change up the spices in these Stuffed Peppers and this dish of Roasted Pepper Zucchini Pasta to make them into Spanish delights.

Tomatoes are used in many ways in Spain. One popular way of enjoying tomatoes is in cold soup like gazpacho. Gazpacho is filled with tomatoes, cucumbers, peppers and other vegetables.  Learn how to make your own healthy gazpacho and savor this refreshing soup. Tomatoes are also used to make sofrito, a basic tomato sauce that has onions, garlic, green peppers and olive oil. Try it in this Sofrito Zucchini Pasta with Beans and Lightly Fried Plantains.

Potatoes are popular ingredients in Spanish dishes. I love making Spanish-Style Potatoes that are crisp and golden like my Patatas Bravas which is a dish often served in tapas bars. The potatoes are cut into cubes, fried and served in a spicy tomato sauce. It is considered one of the spiciest dishes in Spain which explains the name; bravas means” fierce” in Spanish.

Fresh fruit or fruta fresca is often served as the last course and is eaten as healthy snacks in Spain. What is served depends on what is in season so enjoy what is available in these Raw Fruit Tartlets. Pomegranates or granadas are popular in Spain. Try them fresh or in this Delectable Cashew Citrus Cream Cake with Pomegranate.

Spain uses a lot of meat, seafood and cheeses in their dishes. They get baked, broiled, fried, grilled and put into stews. We can enjoy traditional Spanish dishes with a compassionate twist by using plant-based ingredients instead. Tofu, tempeh and seitan can stand in for the meat used in any recipe. Chicken gets swapped out for tofu in my Chile-Rubbed Tofu and Onions over Spanish Rice. Vegetables can substitute for meat as well. I make the well-known Spanish stew, Ropa Vieja, with vegetables instead of beef. Try this Mushroom Ropa Vieja and this Jackfruit Ropa Vieja and see how “meaty” a dish can taste without meat.

Spanish chorizo, which is made with garlic, paprika, cayenne, black pepper and cloves, is not the same as Mexican or Caribbean chorizo. You can use an authentic Spanish spice blend in a vegan sausage recipe to make your own chorizo or try this Tempeh Chorizo. Use your vegan Spanish chorizo to make this stew of Chorizo, Apple and Chickpeas with Fresh Kale and Cashew Sauce.

Spain is surrounded by water so there are a lot of seafood dishes in Spanish cuisine. We can make vegan seafood dishes without the fish. Use Spanish spices in this Tempeh “Fish” recipe to make a vegan version of pescaito frito or fried fish.  There are so many ways to make your own vegan cheese that you’ll wonder why anyone eats any other kind.

Spain is full of nuts…for eating, I mean. They are one of the top producers of almonds, hazelnuts and walnuts. It makes sense that these nuts feature prominently in the delicious recipes of Spain, particularly desserts. Almond nougat (turron) and almond cookies (polvorones) are popular desserts; try these Almond Joy Cookies, which are the best of both worlds. Hazelnuts are delicious in this Hazelnut Coffee Cake, this Hazelnut Cacao Torte and these Hazelnut and Goji Berry Cacao Truffles.  Custards and puddings are common desserts in Spain. Try this Coconut Plantain “Rice” Pudding for a healthier version of arroz con leche. Crema Catalana is a Spanish version of crème Brulee. Make this Vegan Crème Brulee instead. A traditional cake eaten on Easter is called Mona de Pascua. Try this Vegan Spanish Easter Cake at your next holiday celebration. Last but not least, a favorite dessert that’s also eaten for breakfast is churros or fried dough fritters. Rather than round-shaped like other fritters, churros are long with ridges. Usually served with hot chocolate, they can be topped with sugar and/or chocolate sauce as in these Churros with Coconut Sugar and Chili Chocolate Sauce.

This is just a sampling of how to make delicious Spanish food at home. Once you learn the flavor profile of the region, you can use Spanish spices, herbs and ingredients to turn any of your favorite veggie dishes into a Spanish feast. Buen provecho!