Meat Labels: What They REALLY Mean! 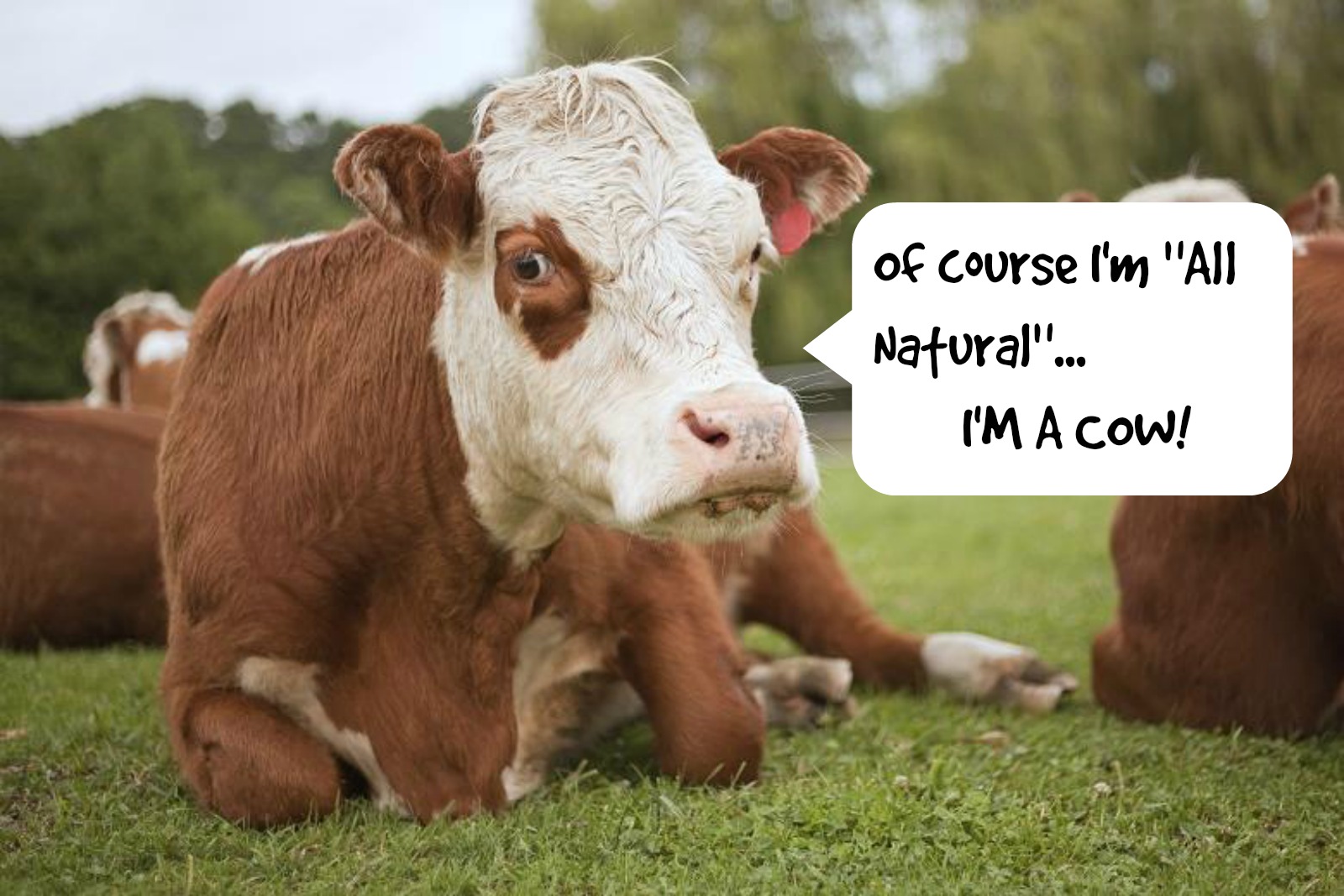 Since 1990 the FDA has required that commercially processed foods come with a nutrition label. This decision was made in an effort to allow consumers to make more informed choices about what they put into their bodies. Given that we make 200 food decisions in a day, one would think that any question surrounding a particular food could be easily answered by taking a quick gander at the label. Is it good for me?  What are all of the ingredients? How was it made? Does it fit with my ethics? Tragically, most food labels fail miserably in answering all of these questions, often leaving consumers even more confused than they were at the start.

Marketing labels for meat take this confusing message a step further. Loaded with buzzwords like “Natural” or “Pasture Raised”, these labels make the food sound wholesome and healthy but their definitions are often much less idyllic. Many terms have no official definitions at all! These labels are like candidates running for political office, they say a bunch of really fantastic sounding things but none of it adds up to anything actually relevant.

So what do these labels actually mean? Does “Grass Fed” mean the cows are treated better? Are “Humanely Raised” animals slaughtered humanely too (isn’t that a giant oxymoron)? It’s this type of confusion that allows people with even the best of intentions to make choices that they wouldn’t have if they’d only had better information. Of course, all of this confusion can be skipped entirely by ditching the meat along with the sketchy labels but for the curious, here are common meat label marketing buzz words and what they really mean to the consumer, the environment and to the animals.

Grass-fed beef is all the rage these days amongst proponents who tout its high omega-3 content and lower saturated fat, environmental positives and more humane treatment of cattle. The problem is, by itself, this label means nothing. Unless the grass-fed label is accompanied by an optional certification by either the USDA, the American Grass Fed Association or the Food Alliance, the beef could have been “finished” in a feedlot where it was fed grain or corn. This lowers the omega-3 content drastically and raises the fat content, thusly eliminating the health benefits you thought you were paying for.

Even with those certifications, however, this is still not the perfect food that the grass-fed trend would have people believe. Though certified grass-fed cows aren’t technically factory farmed, those certified under the USDA have no requirements for welfare, hormones, antibiotics or containment. Furthermore, the sustainability of grass-fed beef versus conventionally raised is questionable too. While fossil fuels used for transport and excess grain are not used, grass-fed cows produce 40 to 60 percent more methane gas than conventionally raised cows. They are also contributing to deforestation to clear the way for pasture lands, effecting biodiversity and the loss of our rainforests.

As far as the health claims go, it’s true that grass-fed beef is lower in saturated fat and higher in omega-3s than conventionally raised cattle. Do you know why? Because they’re eating grass! 60 percent of the fatty acids in grass are omega-3s. While four ounces of grass-fed beef supplies up to 3.5 grams of omega-3s, one quarter cup of flaxseeds supplies 6.3 grams. Wouldn’t it just make more sense to cut out the middle man here? 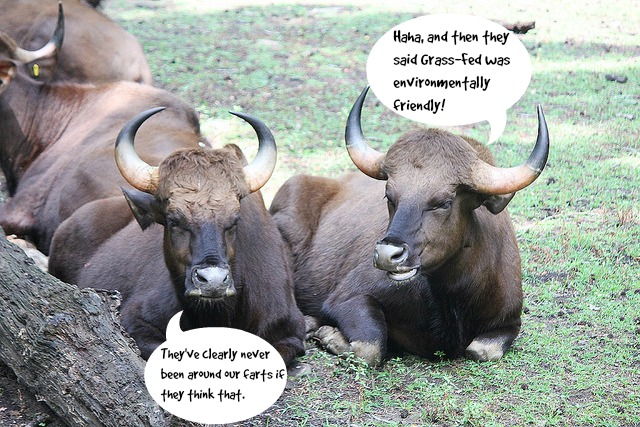 This label has so many layers of meaninglessness that it’s the onion of meat marketing labels. First, the term “Humanely Raised and Handled” in and of itself has no defined standards by the USDA. A producer decides what it means to them and then labels the product if they feel they’ve met their own standards. Though not required, they can take it a step further and ask the USDA to verify that they have met their own self set standards. If the USDA feels they have, they can then add “USDA Process Verified” to the Humanely Raised and Handled label.

Yes, you read that correctly. A meat producer can define what they think is appropriate treatment and label their product as Humanely Raised and Handled. They can then elect to have the USDA come in and verify that they’re, in fact, acting in accordance with their own definition of what’s humane and the USDA will award them with a verification that they’re, basically, doing whatever they want. Did you ever know that kid that started their own club and then elected themselves president? It’s kinda like that. 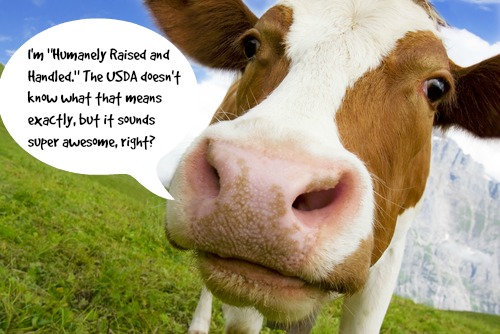 This label has more meaning than the previous two in that it requires a third-party to provide the certification. Overseen by Humane Farm Animal Care, strict protocols are in place for space and treatment of the animals in order to obtain the certification. This makes it seem like the perfect choice for someone who still wants to eat meat, but doesn’t want to contribute to the mistreatment of an animal.

Sadly, the protocols outlined in the certification don’t provide the natural and free existence the label would lead consumers to believe that it does. While animals with this certification are not subjected to factory farming conditions, they are still only required four hours of exercise per day and none of it necessarily needs to take place outside. The certification only stipulates that the animals must be able to perform natural behaviors in the amount of space it would take to move freely while requiring no continuous access to a pasture.

In a nutshell, while this certification ensures that the cattle it covers don’t suffer the same atrocities that factory farmed cattle do, they can still live their entire lives crammed on top of each other indoors or at a feedlot in order to be labeled “Certified Humane.” 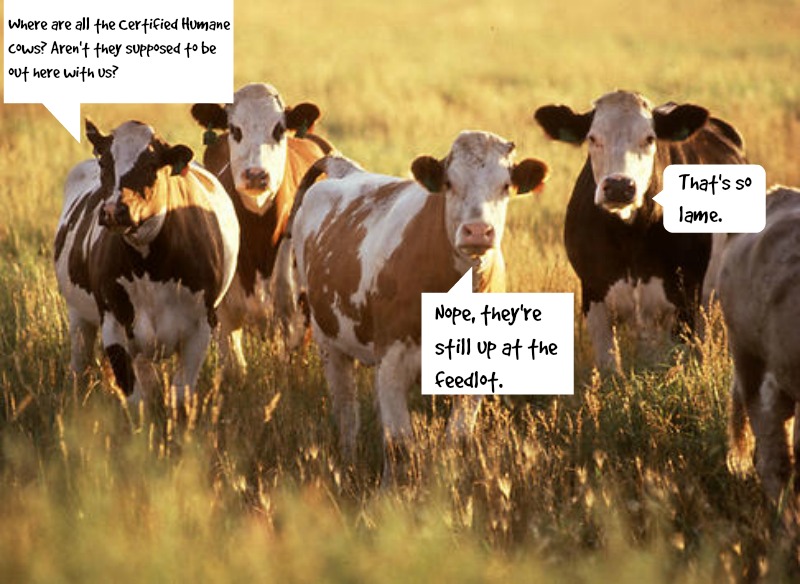 This certification is overseen by the USDA and requires that cattle be fed 100 percent organic feed. The designation can be given for grass-fed or grain-fed, so long as the feed of choice is organic only. This means that no fillers such as animal byproducts like manure or poultry litter, genetically modified feed, plastic pellets for roughage or growth hormones may be used like they are in many conventional settings.

Producers are required to keep detailed records of the cow from birth to market in order to prove that they’ve complied with the protocols for the certification, which leads many people to believe that the animals are monitored more closely and thusly treated better. The truth is, the Certified Organic designation only requires that records be kept regarding the animal’s diet. There are no stipulations regarding treatment in this certification at all. That means the animal could be subjected to much the same horrors a factory farmed animal faces prior to being slaughtered for consumption, so long as the feed it was given was organic. 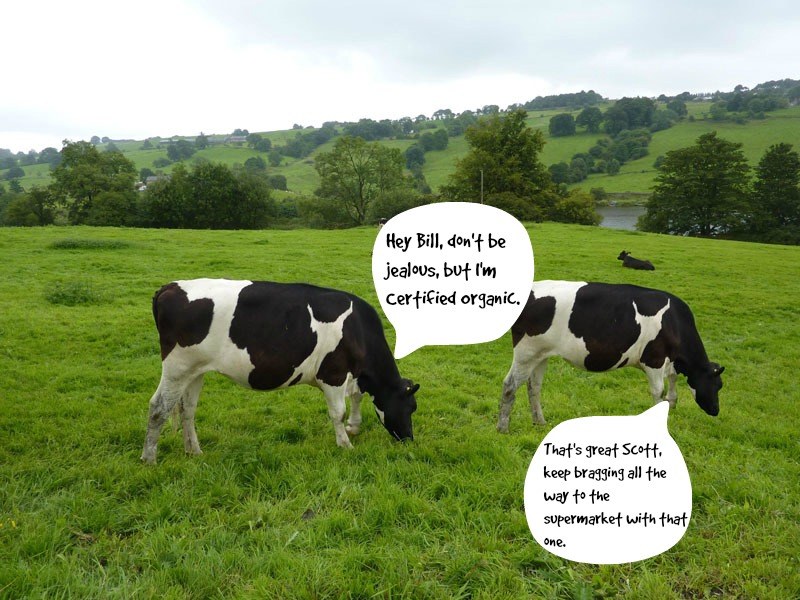 This program deals with animal welfare during the process of raising an animal up to its slaughter. The program puts the treatment of animals raised for consumption on a scale, from one to five and over, in regards to its treatment which they label as steps. Merely seeing the GAP label is in no way an assurance that the animal lived a happy life frolicking in a field however. Understanding each step is the first hurdle to understanding this complicated label, given that the lower steps provide barely any higher standards than one would find in a conventional cattle production. 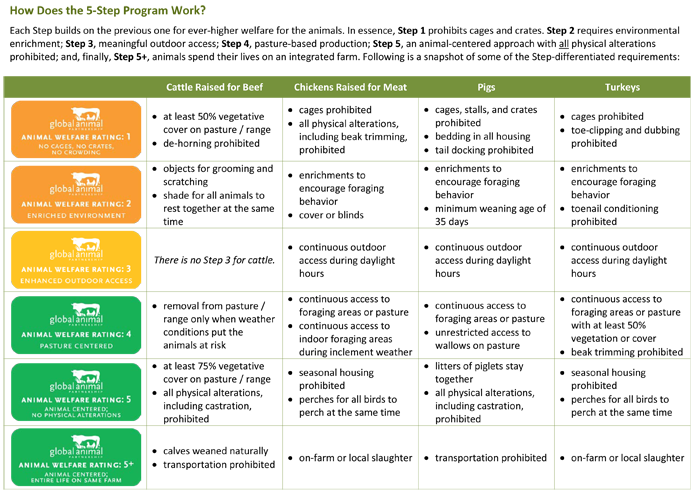 In a nutshell, step 1 makes living conditions slightly better than industry standard by eliminating cages and that’s basically it. It’s also the only step a producer is required to meet in order to qualify for the program so if they implement just the requirements for step 1, they can use the GAP label. They can then optionally implement the requirements for the additional steps should they decide to.

Things like castration without pain relief are still allowed all the way up to level four, as is the use of feedlots. While the higher steps make strides to ensure that the animals are treated as humanely as possible, there are no stipulations put forth on means of slaughter, which means that the animals are covered up to the point in which they’re killed and then all bets are off. 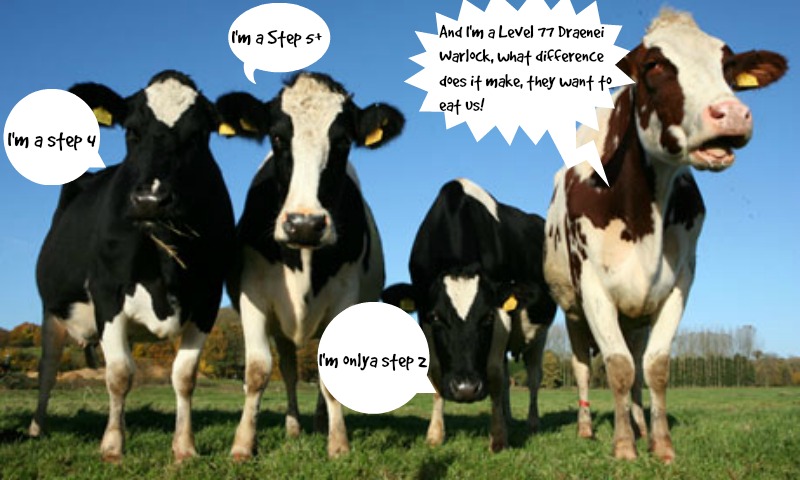 Yet again, here’ s another one that has no real definition by the USDA. A producer can decide what they define a pasture as and put the label on their product. The only way that this designation has any meaning if it’s in the company of an outside certification, such as one of the Grass-Fed certifications. Without that a producer could theoretically call anything a “pasture” and have no legal repercussions to worry about. Likewise, they could give cattle access for a limited amount of time to a pasture, then transport the cattle to a feedlot for the duration of its production life. 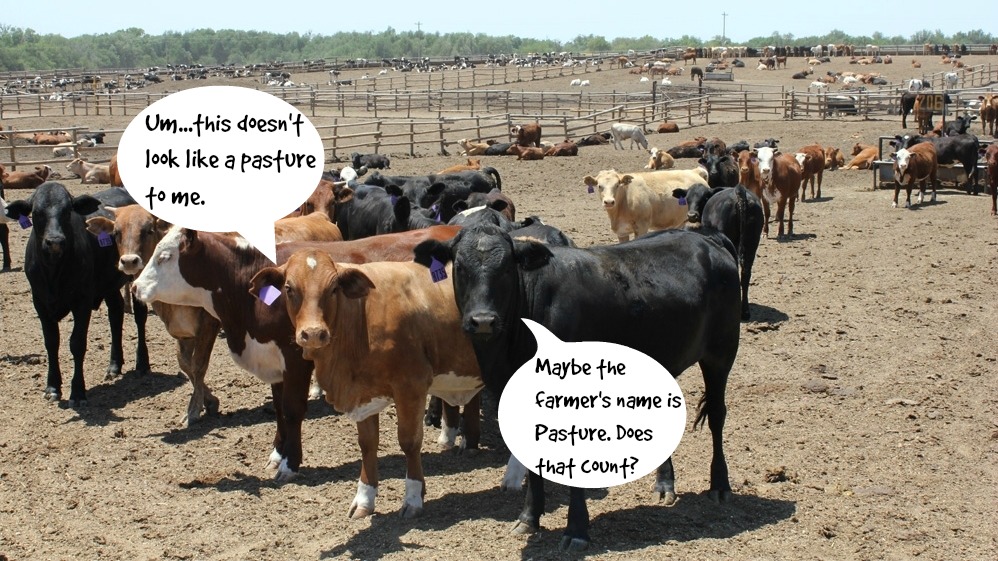 The mother of all food labeling misleads, the term “Natural” or “All Natural” has virtually no meaning whatsoever. In the case of meat, the USDA defines natural as being minimally processed without the addition of preservatives or artificial ingredients. This refers only to the finished product mind you. The cattle can eat any drugs, hormones, antibiotics, fillers or GMO laden foods out there as well as being subjected to the worst animal welfare atrocities imaginable but still be called “Natural.” 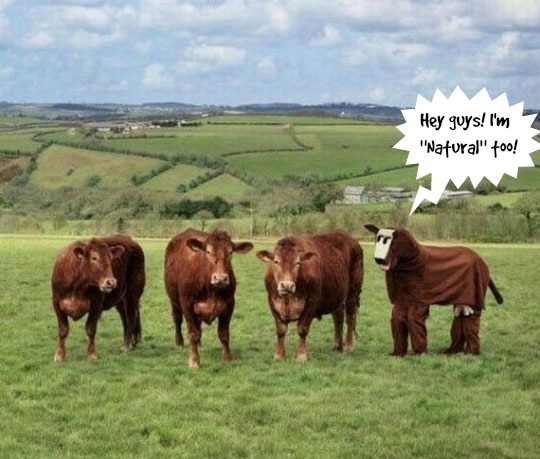 This one means literally what it says. In the course of raising the cattle for food, producers must be able to show sufficient documentation that there were no hormones or antibiotics used while the cattle were being raised. While this is a good thing on many health and environmental levels, it extends to no other substances than hormones or antibiotics. Drugs such as ractopamine and Zilmax are still permitted as well as any types of feed that the producer wants to use. 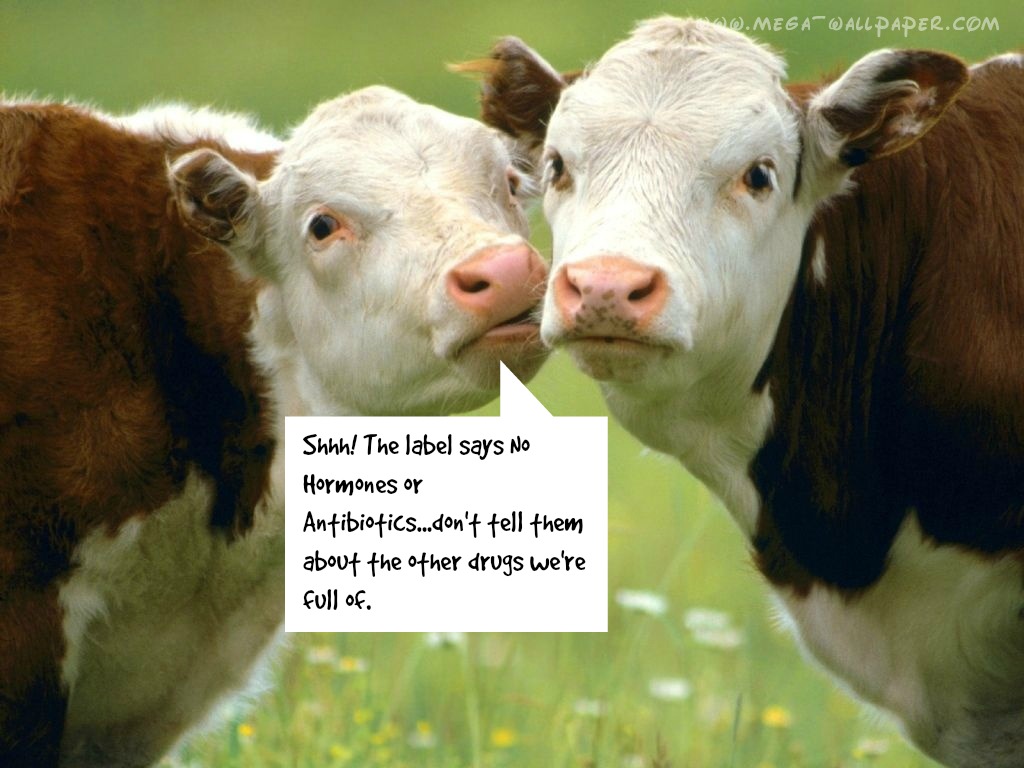