What Does the ‘Natural’ Food Label Really Mean? 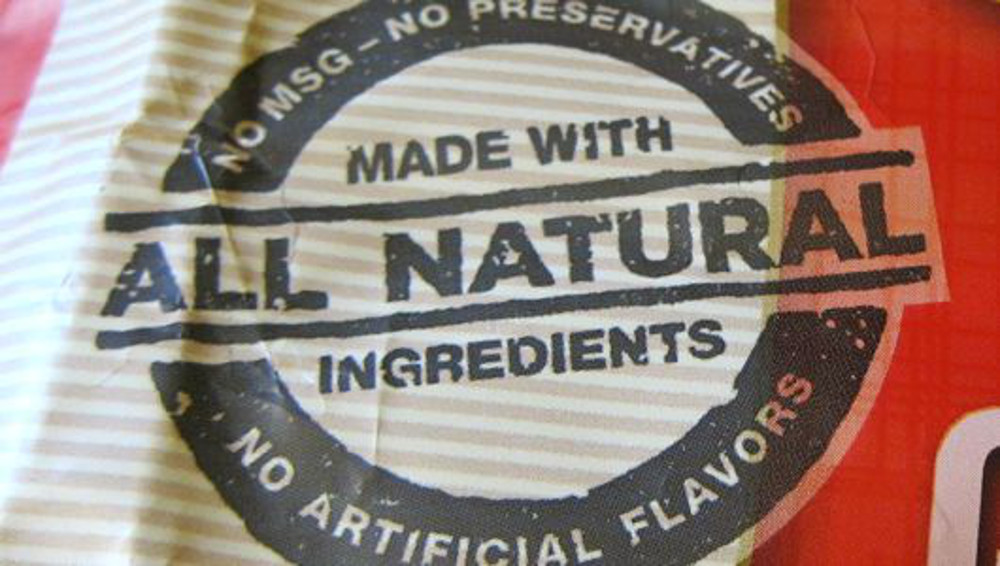 Food labels do a lot of things – they are home to standardized, regulated information like the Nutrition Facts section and marketing ploys such as unregulated claims, product promotions, or celebrity endorsements. But, with labels seemingly only getting more complicated with more colors (read: green washing techniques) and more terminology, what phrases and words found on U.S. food labels are actually based on science, and what stuff is simply plastered on the label to get you to buy?

In this series, we’ll explore some of the most common label terms found on products in the U.S. We’ll determine whether or not they’re actually regulated by the Food and Drug Administration (FDA) – or if the terminology is little more than fancy words and phrases meant to play to your emotions and get you to load up your grocery cart.

Today, we’ll look at “natural” and all its iterations: from “made with natural ingredients” to “100 percent  natural” to “all natural,” what the heck does this really mean? Does it actually say anything about the product you’re considering taking home with you?

If you haven’t been to a grocery store lately: the “natural” claims are everywhere. According to a recent Grist report, “In 2008, Mintel’s Global New Products Database found that ‘all-natural’ was the second most used claim on new American food products. And a recent study by the Shelton Group, an advertising company focusing on sustainability, found that it’s also the most popular. When asked, ‘Which is the best description to read on a food label?,’ 25 percent of consumers answered, ‘100 percent natural.’” In other words, this claim is being used a whole lot, people – and some people are buying it (literally).

But, like picking up a bum dressed up in a fancy suit, bring a product with this label home with you and you might be in for a whole lot of surprises. The FDA does little to regulate this term, meaning companies have fairly open reign when using it on a package. Here’s what the FDA has to say about “natural”: “From a food science perspective, it is difficult to define a food product that is ‘natural’ because the food has probably been processed and is no longer the product of the earth. That said, FDA has not developed a definition for use of the term natural or its derivatives. However, the agency has not objected to the use of the term if the food does not contain added color, artificial flavors, or synthetic substances.”

But when we examine what constitutes “synthetic” or “artificial,” we run into a whole other slew of problems, considering that many products labeled as “natural” are made up of some seemingly not-so-natural things, as evidenced by recent lawsuits. Daniel Engber of Slate reported in 2012 on the contentious nature of these claims: “Last summer, lawyers sued General Mills over the nature of its Nature Valley granola bars. In December, a lawsuit pointed out that Frito-Lay’s Tostitos and SunChips are not in fact ‘made with ALL NATURAL ingredients,’ unless you think that genetically modified grains are natural. Last year, plaintiffs also targeted the GMOs in Kashi breakfast cereals and the genetically modified ‘all-natural corn’ in Kix. ConAgra was accused of making dubious ‘natural’ claims on four varieties of Wesson cooking oil, all of which derive from genetically modified crops.” And what about “all natural” high fructose corn syrup? (The FDA says products containing HFCS are definitely not natural). And GMO “all natural” Naked Juice drinks?

Then again, if we look at that FDA wording once more, the organization simply states it does not “object” – with a stance this passive, it’s really no wonder that a food producer could make “natural” into anything it really wants to.

Some say we can’t trust the natural phrase at all: “When it comes to processed foods, if it says it’s natural, ignore the claim,” says Organic Lifestyle Magazine.

“Maybe you didn’t read the ingredient list on your ‘natural’ product until you got home, only to notice some very UN-natural looking ingredients listed there, and wondered how there could be such an enormous difference between the front of the bag and the back,” says Dr. Joseph Mercola.  “As it turns out, most of what’s on the label is marketing hype and splashy design work, made only to seduce you into believing the product is good for you. And as you’ll see, you have to be very market-savvy to find the truth, because labels have fooled even the smartest shoppers.”

So, if there is so much confusion surrounding “natural,” what does the FDA plan to do about regulating it further? As of right now, nothing. Yep, you read that right. Because the FDA is “not sure how high of an issue it is for consumers (um, did they not see all the lawsuits in the last two years?), they’re tabling the “natural” issue to tackle other priorities.

But then again, there is perhaps some hope. In September, it was announced that “The Food Labeling Modernization Act of 2013” was unveiled by three state representatives, which included information about an overhaul of “natural,” asserting that “natural” products should not have undergone any “chemical changes”: this would include corn syrups, chemically modified starches, and many other processed products labeled as natural.

While the future of this act is unclear, there is one thing you can do in the meantime: read beyond the “natural” claims on the front of packages. Look at the ingredients list, and scrutinize that much more than you did that front-of-package stuff: those ingredients are the things you’ll be putting into your body – and you may find that it’s not at all as natural as the marketing would have you think.

A great rule of thumb: If you can’t pronounce an ingredient, steer clear.  An even better rule of thumb: Avoid processed foods with the “natural” claim altogether, until you can be sure there is more stringent guidelines being put on these products before it lands in the hands (and the bodies) of you and your family.