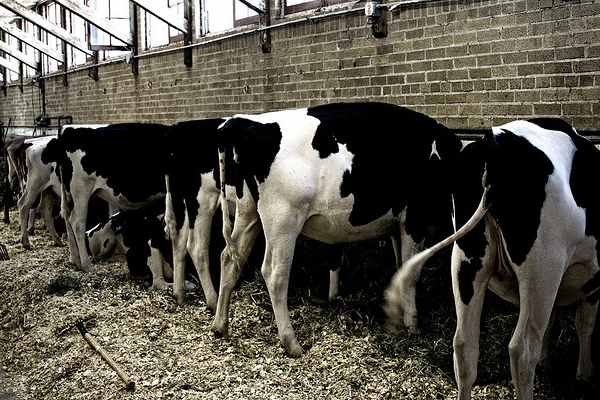 According to a new study from the Illinois Sustainable Technology Center, wastewater near dairy farms contains significant concentrations of estrogenic hormones that can persist for months or even years. The study was just published in the Environmental Science & Technology journal.

Lactating cows generate estrogenic hormones that are excreted in their urine and feces. This is normal. What’s unnatural and problematic is the number of animals packed into confined animal feeding operations (CAFOs), and thus the concentration of hormones in the wastewater generated by the operations.

This wastewater is often stored in large lagoons, and even used to fertilize crops.

Research has shown that hormone concentrations in livestock wastes are 100 to 1,000 times higher than those emitted from human sewage treatment plants, and that large dairy farms are a primary source of estrogens in the environment. Studies have also detected estrogenic hormones in soil and nearby watersheds after dairy wastewater was used to fertilize crops.

Lead researcher Wei Zheng explained: “These estrogens are present at levels that can affect the (reproductive functions of) aquatic animals.” He also noted that these estrogens can “feminize” aquatic animals, causing male fish to have low sperm counts or to develop female characteristics, thus undermining their ability to reproduce.

If unchecked, hormones in surface or groundwater could also begin contaminating our food and water supply. Zheng noted that these estrogens could easily be taken up by plants, thus entering the food chain.

When exposed to the air, estrogenic hormones in animal waste break down into harmless byproducts over a predictable period of time. But in anoxic conditions, degradation rates are extremely slow.

In the study, after 52 days at an ideal temperature for hormone degradation, less than 30 percent of the hormones in the solution had broken down. In the absence of oxygen, the hormones also exhibited the unusual behavior of rapidly converting from one form to another, making them difficult to detect.

First and foremost, Ditch the Dairy! There are now TONS of plant-based milks on the market. Sweetened or unsweetened, flavored or plain. From soy to almond to flax, there’s an alternative for everyone (check out our ULTIMATE guide!)

Not a fan of the packaged stuff? You can make your own nut or seed milk in just a few simple steps!

Plant-based milks are better for the animals, for the environment, and for your health!