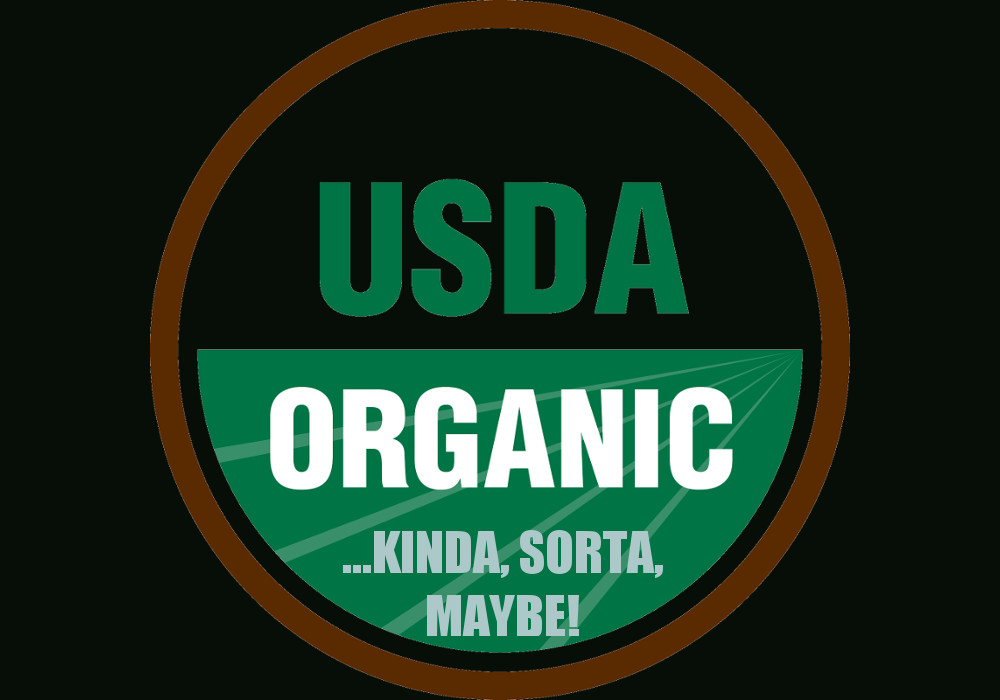 At One Green Planet, we’re of the mindset that sometimes all you really can do is do your best. That means that, in a perfect world, we’d all have unlimited clean, genetic-modification-free foods at our disposal at reasonable costs – but, in the real world of hectic schedules and limited resources and time, that’s simply not always what we have available to us, and we have to do the best we can with the information we do have for ourselves and our families.  Short of starting up your own farm so you can be in complete control of every piece of food you eat, sometimes you just have to rely on store-bought stuff to feed yourself on a busy day!

For many of us, this means that we choose the “best” choice out there – foods certified organic by the USDA through the National Organic Program.

As we noted in a recent overview of “organic” labels and all their variations, foods labeled as organic do face an extra layer of regulation and monitoring not present for conventional foods, so that’s the good news. In most cases, you can be sure that foods bearing the green (or black)-and-white USDA organic label are made up of at least 95 percent organically produced ingredients (excluding salt and water).

But then again, considering this “95 percent” number, some of us who rely on the organic system for the “best” store-bought food options available to us might question: wait, what’s that other five percent made up of? What the heck else could be put in the foods I consume on a daily basis? And why is even five percent wiggle-room allowed?

Well, Green Monsters, the answers to some of these questions might astound you.

To begin with, here’s a summarized list of non-organic ingredients you might find in your organic foods. Depending on the individual ingredient, it may be allowed as an actual part of the food or just used as part of the processing of the product, but you can be sure of one thing: if it’s listed here, there could be traces of it in your organic food. The list includes a) non-organic agricultural products such as “casings from processed intestines,” gelatins, starches, fruit and vegetable colorings, lecithins, and gums like guar gum or locust bean gums, b) non-synthetics like calcium chloride, carrageenan, dairy cultures, enzymes, and non-synthetic waxes and C) synthetics (yikes!!!), including calcium phosphates, ascorbic acid, chlorine materials, ethylene, and xanthan gum. If you want to see the full “National List of Allowed and Prohibited Substances in the National Organic Program’s words, check it out here.

Now, if the lists themselves don’t look scary enough, here’s a primer on what’s being said about some of these permitted ingredients:

And that’s just a start on the potential issues and side effects with many of the ingredients the USDA allows to be part of many organic food products, Green Monsters. In other words, Why are these ingredients allowed? According to Vani Hari, an investigative reporter and food activist for Foodbabe.com, writes “A majority of the foods were allowed because no other substitute from an organic supplier was widely available or for economic reasons. [A] majority of the foods were allowed only after companies submitted specific petitions to the USDA to include them.”

Other natural food advocates and independent companies claim many of these ingredients may be allowed because of Big Food’s influences on the people who regulate our food system.  Nina Planck, a food writer and small farmer advocate, writes: “the Organic Trade Association – a food-industry group whose members include such giants as Kraft, Dean Foods and General Mills, which own national organic brands – is seeking to dilute the organic standards.” (For more information on possible corporate influence on the National Organic Program, check out The Cornucopia Institute’s “Organic Watergate” White Paper.)

Ok, so all of this adds up yet another major case for buying more whole, unprocessed foods. But, as noted earlier, however, we know it’s not realistic to make every single thing from scratch, day in and day out. So, until we can all own our own farms and/or avoid store-bought foods altogether and/or have unlimited time and resources to cook from scratch, read on:

While we can’t yet fully be sure of the real reasons some of these inexplicably allowable ingredients are allowed to be part of what should be the U.S. consumer’s “best” option, one thing is for sure: we need to read every single ingredient on the label, even if the USDA organic label is emblazoned on a product. If even one ingredient is synthetic, non-organic, or plain old toxic, put that food product back on the shelf. Then, get home and write the company that makes the product to tell them: I want 100 percent organic food, no exceptions. Better yet, write the USDA and ask them why the given ingredient(s) is permitted! Tell them you demand food labeled as organic to be 100 percent chemical-free, 100 percent clean, 100 percent real food for yourself and your family.