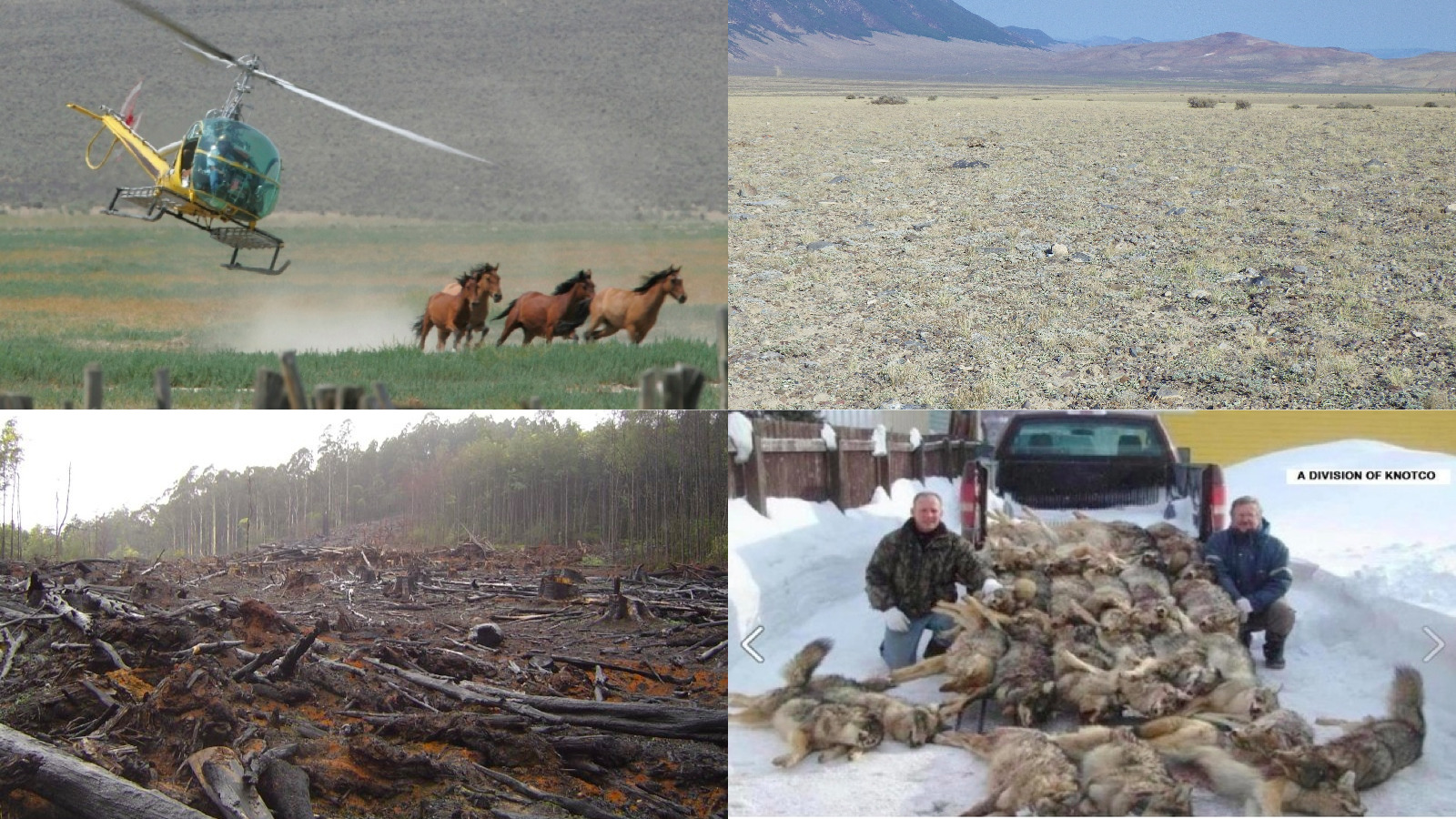 Grazing has its place in just about every agricultural system that involves livestock. This includes cows bred to produce “organic” dairy products, or those set to become “grass-fed beef,” who will graze for two to three years before slaughter, or cows bred for their flesh or milk in the factory farming system who will graze for up to one year before being transported to feedlots.

However the particular breeding, feeding and killing operation is conducted, humans are introducing large numbers of grazing cattle into areas where cows were not previously found. This has an enormous impact on native ecosystems – so much so that grazing cattle now have the character of an invasive species.

After habitat loss, which is caused by clearing and consuming natural resources for human use, invasive species are listed as the second largest threat to biodiversity in North America. In the continental United States, 41 percent of all land is currently grazed by livestock.

Operations that seek to protect the interests of the cattle industry are responsible for the mass extermination of wolves, the roundup of wild horses, deforestation, and shocking loss of biodiversity, while the act of grazing itself contributes to desertification and erosion of soil and land. Let’s take a look for a moment at the many ways the introduction and proliferation of grazing cattle has earned them the title of “invasive species.”

The Mass Extermination of Wolves

Wolves are often portrayed as the “invasive” species, a predator that is capable of wiping out entire populations of prey when introduced to a new region. However, in their current state wolves don’t fit this criteria.

The Center for Biological Diversity notes that some populations of grizzly bears and wolves have already been driven extinct by the livestock industry, while an additional 175 species are currently threatened or endangered. The Mexican Grey Wolf has already gone extinct in southwestern ecosystems due to “predator control systems” crafted to protect livestock.

So what threat do wild wolves and other large carnivores pose to livestock? For one, they compete for scarce resources made more scarce by overgrazing. Second, they threaten livestock directly, in large part because their natural prey has been eliminated.

Despite the widely held belief that wolves pose a significant threat to animal agriculture’s bottom line, critics suggest that wolves pose a relatively low risk to livestock. Nevertheless, they’ve been targeted in a mass extermination campaign sponsored by the U.S. Fish and Wildlife Service in order to make way for cattle interests.

Hunters were hired to kill wolves en masse prior to 1930, leading some populations to become extinct. It wasn’t until the Endangered Species Act of 1973 that conservationists began working hard toward rehabilitation. But these efforts were met with a changed landscape, degraded by decades of grazing. The imposition of huge numbers of cattle resulted in the destruction of watersheds and vegetation; grasslands were turned into eroded deserts.

This remains the situation today, where the conflict continues to take place on 270 million acres of public land, where grazing rights have been cheaply purchased by the industry. These rights are granted by the Bureau of Land Management (BLM) and the U.S. Forest Service and, despite being for-profit operations, are subsidized by taxpayers. 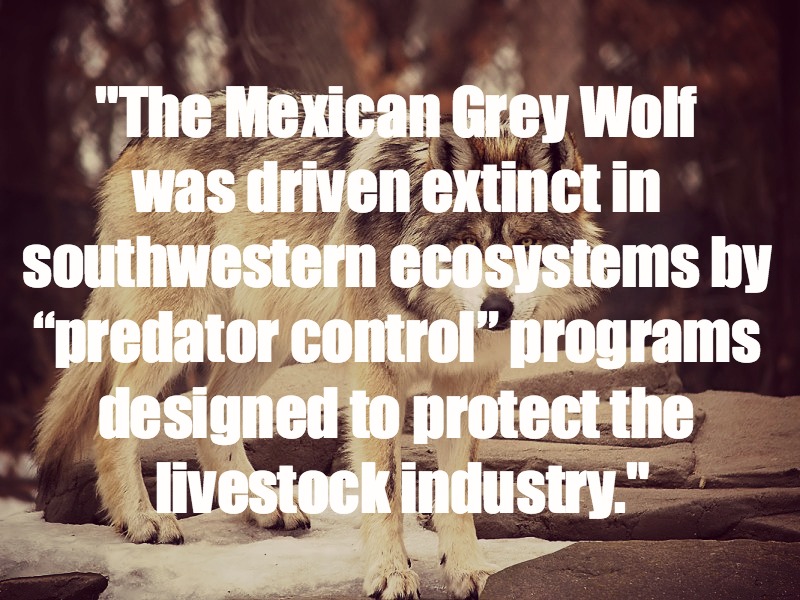 The Roundup of Wild Horses

The wild horse is another alleged grazing livestock competitor being devastated in the name of industry. The wild horse population (despite being only tens of thousands relative to millions of cattle) had been decimated so heavily by the cattle industry that the Wild Free-Roaming Horses and Burros Act (WFRHBA) was established in 1971 an attempt to protect them from impending extinction. However, despite this relative “protection,” wild horse numbers have dwindled down to 40,000. Their situation is so dire that advocates are petitioning the U.S. Fish and Wildlife Service to protect wild horses under the Endangered Species Act.

Notwithstanding the act’s attempt to protect horses from capture and slaughter, and the fact that cattle outnumber horses fifty to one, the BLM continues to perform roundups of wild horses. Cattle ranchers argue that this ostensible “maintenance” of the wild horse population is needed to keep their population in check. Meanwhile, the BLM doesn’t want to miss out on the livestock grazing tax it collects from cattle ranchers. Wild grazing horses just aren’t profitable. 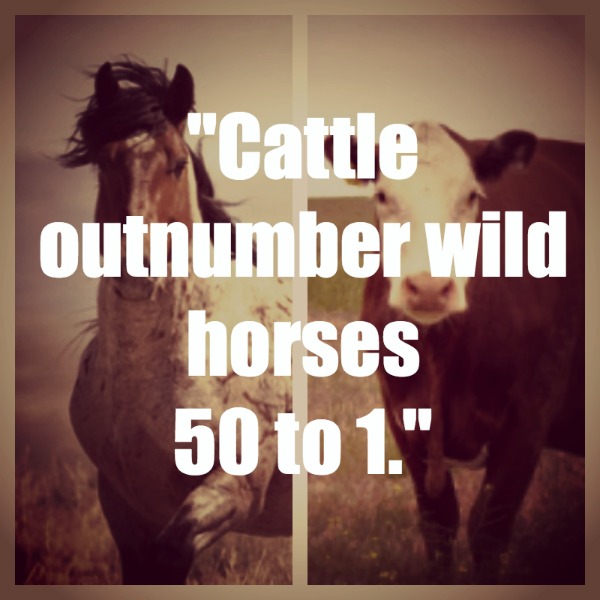 Outside of the United States, the world’s biodiversity takes another hit dealt by the cattle industry in the form of rainforest deforestation. Cattle ranching is responsible for 80 percent of deforestation in the Amazon, and Latin America’s other rainforests are also under siege. In a double-hitter, the cattle industry is responsible for deforestation in these areas to make room for grazing cattle and to make room to grow crops that will be turned to animal feed. Between 40 and 60 acres of rainforest are clear-cut every minute to graze cattle and grow monocropped soybeans to be used in animal feed.

This staggering amount of clear cutting, which destroys the oxygen-producing, carbon-storing giants of the planet, results in one football field of tropical rainforest being destroyed every six seconds to produce the equivalent of 257 hamburgers.

This means that eating just one hamburger has the same carbon footprint as driving a car everyday for a month. In just 24 hours, deforestation releases as much carbon dioxide into the atmosphere as eight million people flying from London to New York.

The total negative cost of deforestation includes the loss of biodiversity; the loss of carbon-storing trees, which contributes to global warming; water depletion and pollution; and soil degradation and erosion. 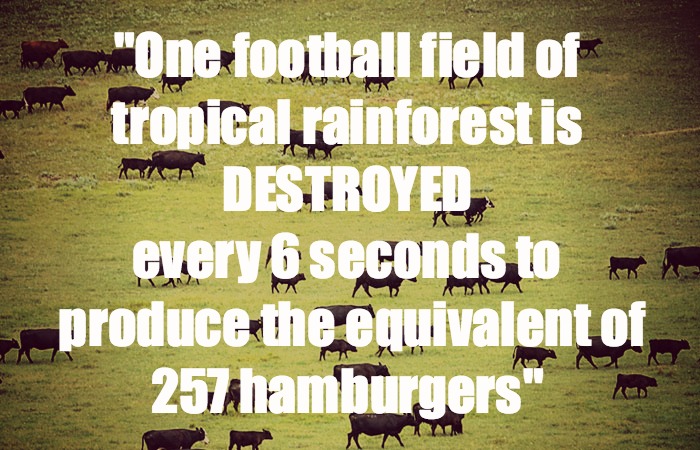 In an article published in Environment, Development and Sustainability, David Pimental establishes soil erosion as one of the most serious environmental and public health problems facing human beings today. This is because soil is being degenerated 10 to 40 times faster than the rate of renewal, “imperiling future human food security and environmental quality.”

Approximately half of the earth’s land surface is used for agriculture. Twenty-six percent of this is devoted to grazing livestock, while 33 percent is devoted to growing crops used to feed to livestock. Of all grazing land in the U.S., more than half is now overgrazed and subject to high erosion rates.

Erosion significantly impacts biodiversity. When the organic matter in soil is diminished, the overall biomass decreases, as does its potential to produce more life. This impact is felt on plants, animals, and microbes or, in short, on the entire ecosystem.

These erosion rates also affect world food production. The Food and Agricultural Organization of the United Nations reports that food availability per capita has been declining for two decades, measured in cereal grains that comprise 80 percent of the world’s food. Although some would like to believe this is not an issue since productivity yields per hectare are increasing, the fact is that while some areas of productivity increase, the soil is eroding, causing irreparable damage alongside a growing human population that is placing higher demands on a finite and diminishing amount of arable land. 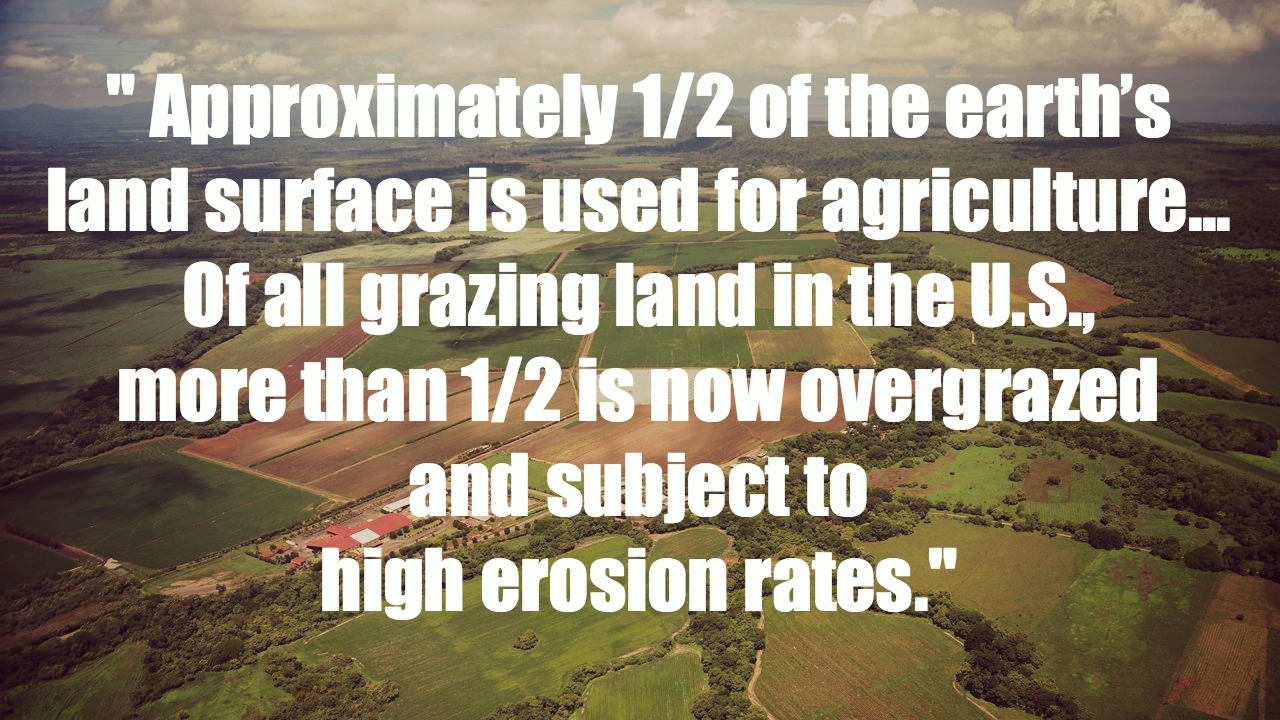 So, Which is the Invasive Species?

According to the Center for Biological Diversity, the ecological costs of grazing livestock are greater than any other form of land use in the West. In the arid Southwestern United States, livestock grazing is the leading cause of species endangerment, while also contributing to desertification and soil erosion.

While the industry tries to paint an idyllic picture of pastures of ranchers raising livestock in a traditional and sustainable manner, while merely protecting their livelihood by “maintaining” other invasive species, further investigation reveals that it is in fact the grazers who are the invasive species. It turns out that the purported threats are not ecologically invasive, but financially invasive for the pockets of the BLM and the cattle industry.