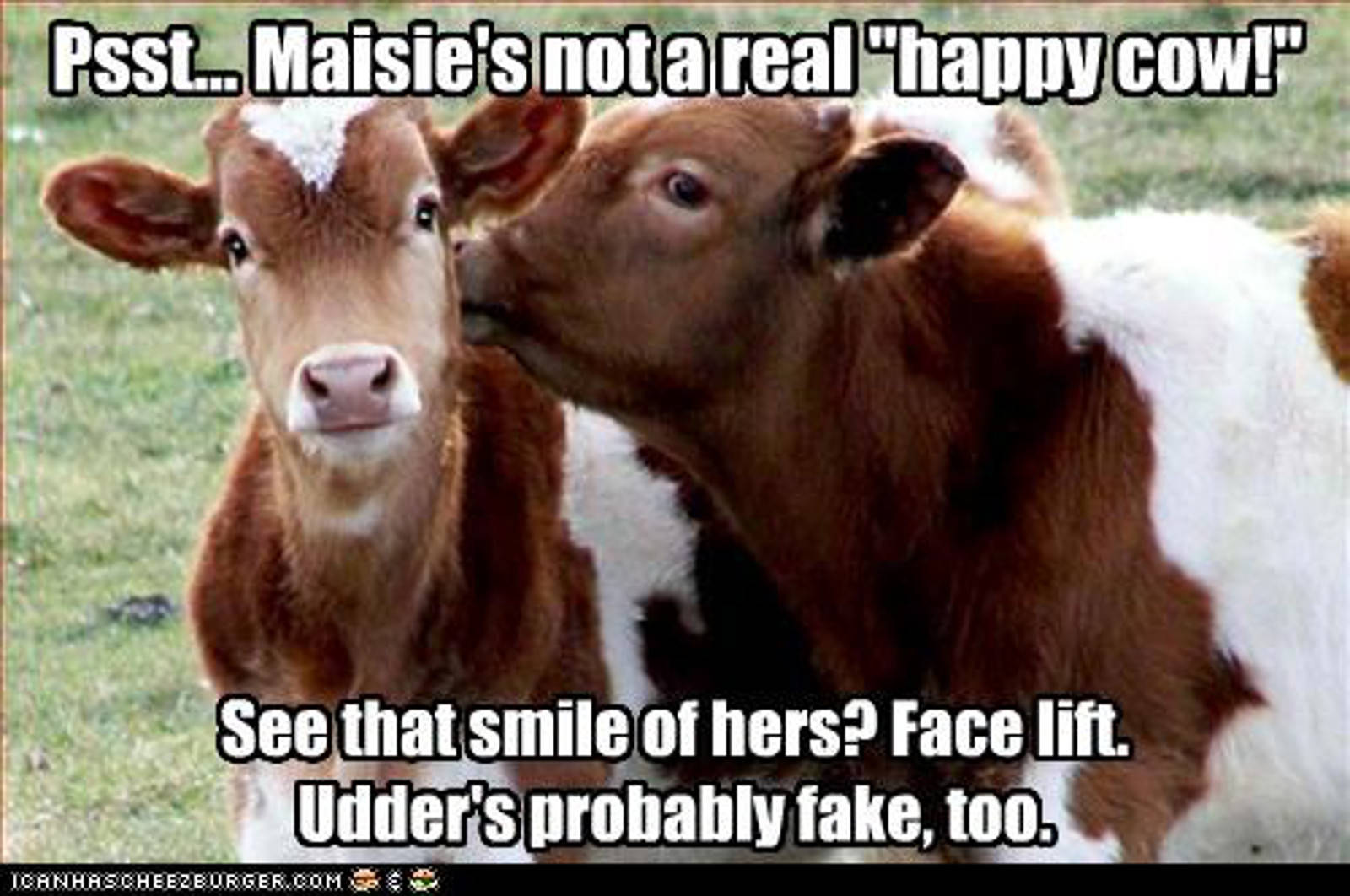 Lead Image Source : I Can Has Cheezburger

With the growing awareness being brought to the cruel treatment of animals raised on factory farms (thanks to undercover investigations!), more consumers are looking for “organic” and “free-range labels” on their meat and dairy products. The assumption being that animals raised on an organic farm are not raised under the same unsanitary and inhumane conditions. The illustrious organic farm is a place that calls to mind idyllic images of happy farmers and happy cows that take pride in producing milk and cheese for the American masses. While this is a lovely image and I truly do wish this is what life was actually like for farm animals, the real-life organic farm is more factory than fairy-tale.

In most cases, the “organic” label that is plastered to milk, yogurt, and cheese packaging is just a fancy sticker that only ensures that the cows who produced these products were fed strictly “organic” feed (i.e. organic corn that’s really not good for cows anyway). Some of the other regulations organic farmers must comply with include: allowing cows unrestricted access to pasture and no antibiotics or hormones are allowed, unless an animal is sick in which case it is treated and removed from the herd. You will note there aren’t any restrictions that would protect organic cows from cruel treatment or other inhumane practices typical of dairy production.

In a similar manner to the “small farm” appeal that entices animal lovers to give in and eat meat, the organic label on dairy is another cheap marketing ploy designed to make us feel better about our bad decisions.

1. Udder Infections Not Treated with Antibiotics

Organic dairy cows are mechanically milked 3 times a day and are expected to produce 10 times more milk than they would naturally. This intense burden on the cow’s metabolism make them highly susceptible to infection, especially when udders become raw from constant milking. This endless string of milk production frequently results in painful udder infections, called mastisis (the second leading cause of dairy cow death). Most commonly, these infections result from a strain of staph, which is actually made worse if treated with Iodine, an alternative to antibiotics. In some instances, an antibiotic is necessary to relieve the intense pain wrought from these infections, yet farmers refuse to utilize antibiotics and risk having to remove the cow from production.

Not only is mastitis extremely painful for cows, but milk from a sick cow will contain pus. Yum.

Like factory-farm cows, organic-farm cows are forced to experience the emotional distress of losing a child continuously until they are brought to slaughter. An organic dairy cow is seen as having one purpose in life: to produce milk  – not milk to feed her babies, but milk to sell to millions of Americans. How fulfilling! Because of this, dairy cows are artificially inseminated every year, only going a couple months in between pregnancies during their entire lifespan. Once the cow gives birth, her calf is immediately taken away from her so it doesn’t drink ANY of her precious money…sorry, I meant milk.

3. Cows Experience Stress when Isolated or Separated from Friends

Following the above point, when mother cows are separated from their calves, they become notably depressed, bellowing for extended periods of time, hiding in dark corners, and refusing to eat or drink. There has been a ton of research done into the emotional capacity of cows and all findings show that cows experience the same complex feelings we do. Cows exhibited heightened levels of cortisol (a stress hormone) and rapid heart rates when they are separated from family and friends. In fact, stressed cows produce less milk, compounding the pressure put on the animal to produce high-yields.

Not only does the organic mother cow experience distress in this process, but separation upon birth is incredibly traumatic to the calf. Female calves are raised as dairy cows, bound to the same sad fate as their mothers, but male calves have it worse. Minutes after birth, male calves are forced into “veal crates,” tight enclosures where their necks are chained to prevent any sort of motion and fed a diet of iron-filled fluids. They are slaughtered at 16 weeks old. Next time you see a label that boasts “milk-fed veal,” all that means is the calf was actually allowed to drink the milk it was intended to during its short life.

There is a common misunderstanding that just because organic cows are allowed unrestricted access to pasture, that that means they have lots of space to roam free. This is not the case. Cows on organic farms are usually confined in filthy sheds, where they live in their filth, so farmers can keep track of cows for frequent milking.

5. Feedlots and Fear Prior to Inhuman Slaughter

After a short four years of constant pregnancies and milking, organic dairy cows are shipped off to feedlots to be fattened up before they are slaughtered. Commonly, feedlots are factory farms, where organic cows are simply fed organic feed, while the other thousands of cows are given regular feed.

When organic dairy cows reach slaughter weight, they are brought to the same USDA regulated facilities as factory farm cows. These facilities are notorious for their cruel, inhumane treatment of animals. Being shoved into a metal floored room with thousands of other cows, the final moments of life for an organic cow is just as terrifying as it is for a factory farm cow. While it is required that cows be rendered unconscious before slaughter, the method of electrocuting animals until they pass out can hardly be considered a kind practice.

Less Bad Does NOT Mean Good

As you can see, while organic may be a better alternative to dairy that is filled with hormones and antibiotics, it is not a cruelty-free solution. If you really want to make a cow happy, ditch dairy all together and stop paying for the mistreatment of these sensitive animals. They might not be able to thank you themselves, so I will do it for them.

Image Source: I Can Has Cheezburger