Bizarre Ways Ads Convince Us Animal Exploitation is Fashionable, and Even Empowering 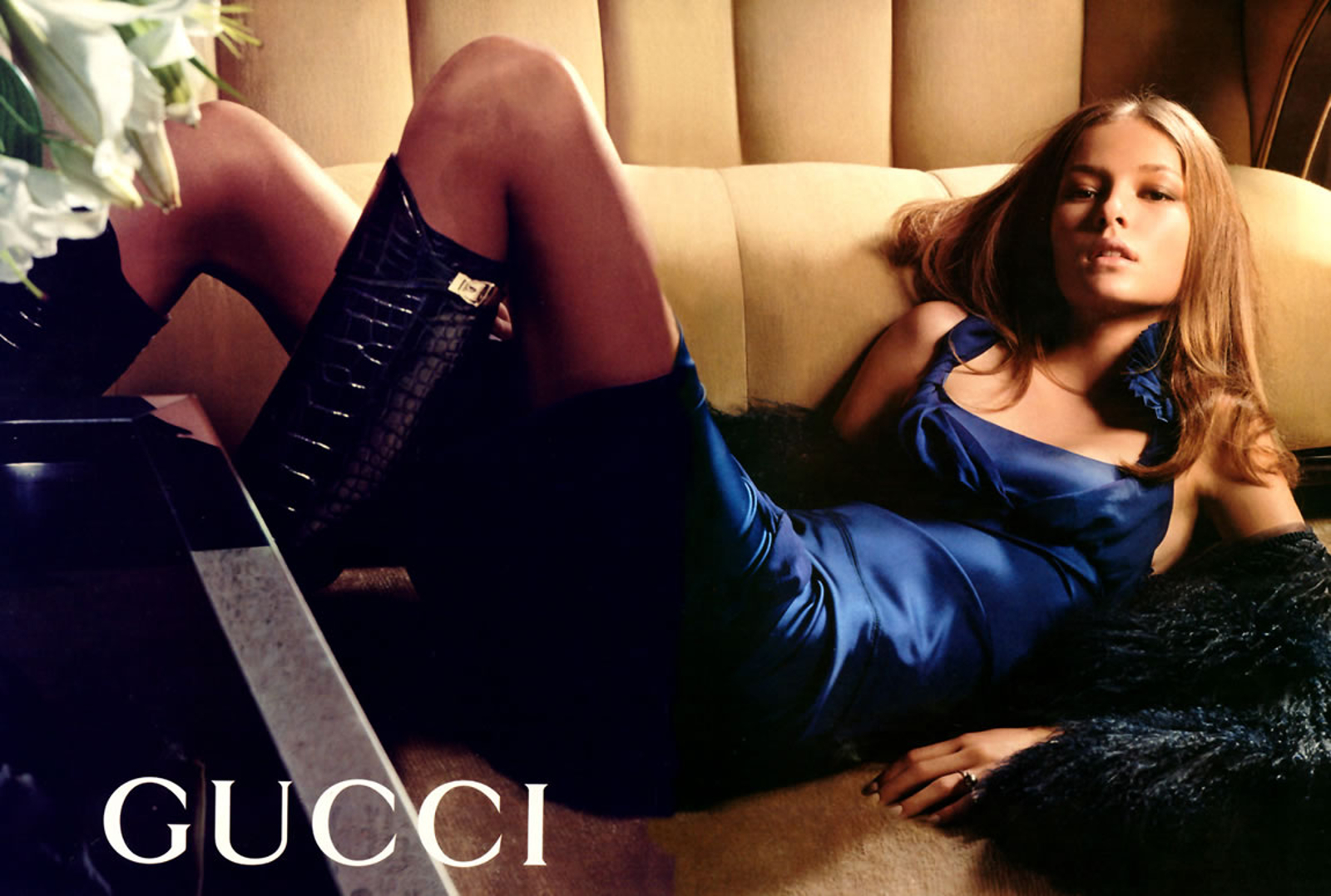 Advertising: it’s everywhere! Even if you’re not watching television, advertising has its means of working its way into your life. Watching a funny video on YouTube? Reading an article or doing some online shopping on a web page with adsense? Getting away from the computer and going out for a drive, passing by the roadside billboards? Flipping through the local newspaper?

Let’s face it: advertisements are almost as much a part of our everyday lives as air is. Now, just because advertising is everywhere you look, doesn’t mean that are advertisements are the devil. However, with the ever-increasing ubiquity of ads, it’s becoming more and more important to stop, think, and ask ourselves what these ads are selling us.

An Advertisement Isn’t Just About What, But Who

An advertisement tells you more than just about the product they want you to buy – they sell you an idea of how much better your life could be with their product. If you’ve seen advertisements for beer, the commercials aren’t often about describing the particular flavour of the beer. Beer commercials don’t tell you, “If you liked this drink, you should try our drink!”

What you’re more likely to see is the commercial selling you the idea of the ideal beer drinker. What is their life like? What do they spend their time doing? How do people react to them? In the case of these alcoholic ads, the life of the individual is the life of the party: sunny beaches, expensive club scenes, lavish vacation spots. They’re young, happy, and spending their youthfulness in bliss. And everyone, be it the well-dressed pool boy to the cute girl ordering a drink at the bar, is completely smitten with our consumer.

What makes this individual different from you? You have nice hair. You’ve been to parties. What gives? Why don’t people hang off your every word and make you feel like the center of attention? The only difference, as the commercial explains, is that they’ve got this product in hand, ready to show the world their good tastes, and you don’t.

And it’s a good marketing plan. Make the viewer feel as if there’s a whole new life, a better life, waiting out there for them that’s just hiding from them in that chilled alcoholic drink, or that new pair of pants, or that low-calorie cereal. All the company needs to know is that people on average want a better life, a happier life, and they’ve got their campaign. And hey, why not? A few responsible drinks with friends, some berry cereal and a pair of fresh low-cut jeans never hurt anyone. Except for…

When an Advertisement Portrays a Who as a What

What does the following advertisement want you to buy? 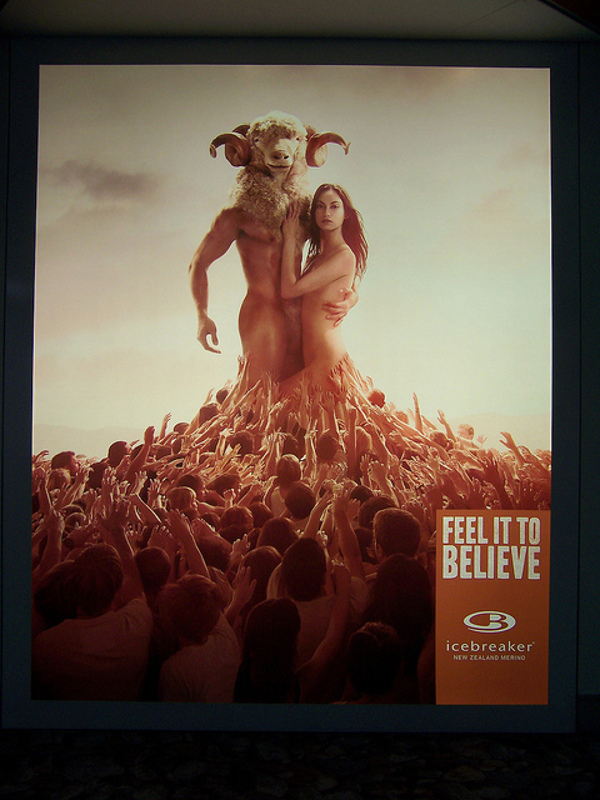 Even without showing the actual product in the advertisement, you get the idea of what’s being sold: you’ve got to “feel it to believe,” the “it” in question being fur. And why do they want you to buy it? (The answer is surprisingly not “Because you’ve always wanted to have the head of a ram”)

Look at that naked woman clinging to our main subject: she knows her real furs from her fake furs. She’s felt it and believed in the genuineness of the product. Crowds of less-muscular, less-naked peons crowd around to cop a feel of our strong, glistening male’s 100 percent real fur. No one dares stop to ask whether or not it is a man, or the non-human animal itself, who the fur belongs to. Because everyone in the media knows: once you pay for something, it’s yours. And if you’re not paying for someone else to die in the making of what’s yours, why pay for it at all? Men, our adsenses tell us, only spend their money wisely, on “the real deal.”

But what about our female consumers? The media surely wants us to know that even if a man would kill an animal to look “good and strong,” us delicate, pink-laced, good-mannered, submissive women would never do that, would we? 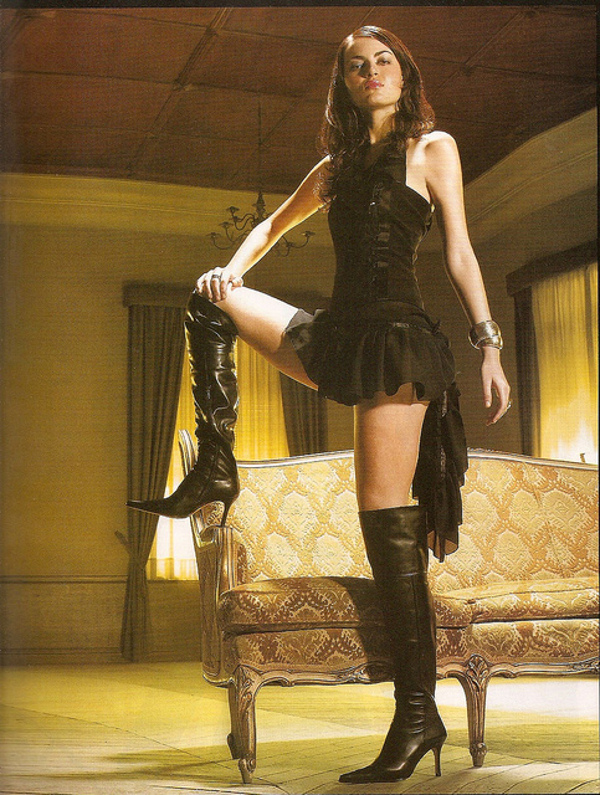 This advertisement from a Spanish leather shoemaker begs to differ! See, empowerment out of consumerism and exploitation isn’t just for men: women get a shot at it too. This advertisement knows you and many other women are fed up with looking weak and submissive, it’s time for you to dominate. And what better way to dominate than to wear the skin of a creature so mercilessly beaten into submission, forced into confinement, stripped of their flesh and deprived of even the most basic of rights? What’s more, what better says “strength, domination, power” than paying someone else to do this all for you?

For decades, women seeking ways to display sexual strength and power have been told that they can find what their looking for only in a product genuinely made out of suffering and sadness. Leather has been time and time again advertised as the one true way to show who’s the boss. And the boss doesn’t think about what – or who – they crush on their way to the top. Leather, fur, and wool ads will more often than not opt out of mentioning the names and faces of animals behind the product. Instead, companies choose to tell consumers that animal products are the only “top-quality” products by identifying them with different titles: suede, antique grain, top grain. Why say “the skin of unborn calves” when you can call it “slink”?

Where the Ads Fall Short

Advertisements can only use so many words, so many expressions. In the end of the day, most can only show you an image and say, “This is what will make you look cool and in control.” Even if you agree with their aesthetic judgement, an ad can sell you that image, but they can’t make sure you’ll buy their specific product.

Advertising sells you an idea of what sexy, strong, fun, and on top of the world looks like, but they can’t commit you to creating your own image out of the exploitation of other animals.

Try as hard as they might to sell the idea that only death can bring beauty, faux furs and leathers, as well as cruelty-free cosmetics or vegan recipes for classic foods are an easy one-way ticket out of animal cruelty without sacrificing the look you want, the taste you want, or the life you want. Advertisements can try to sell us a new life all they want, but we can make sure it doesn’t come at the cost of billions of other lives.

Be a Green Monster, don’t be programmed by what you see in advertisements. Choose vegan food, stay informed about the businesses you support, purchase eco-friendly and ethically produced products and show the world you’re not affected by these bad ads!