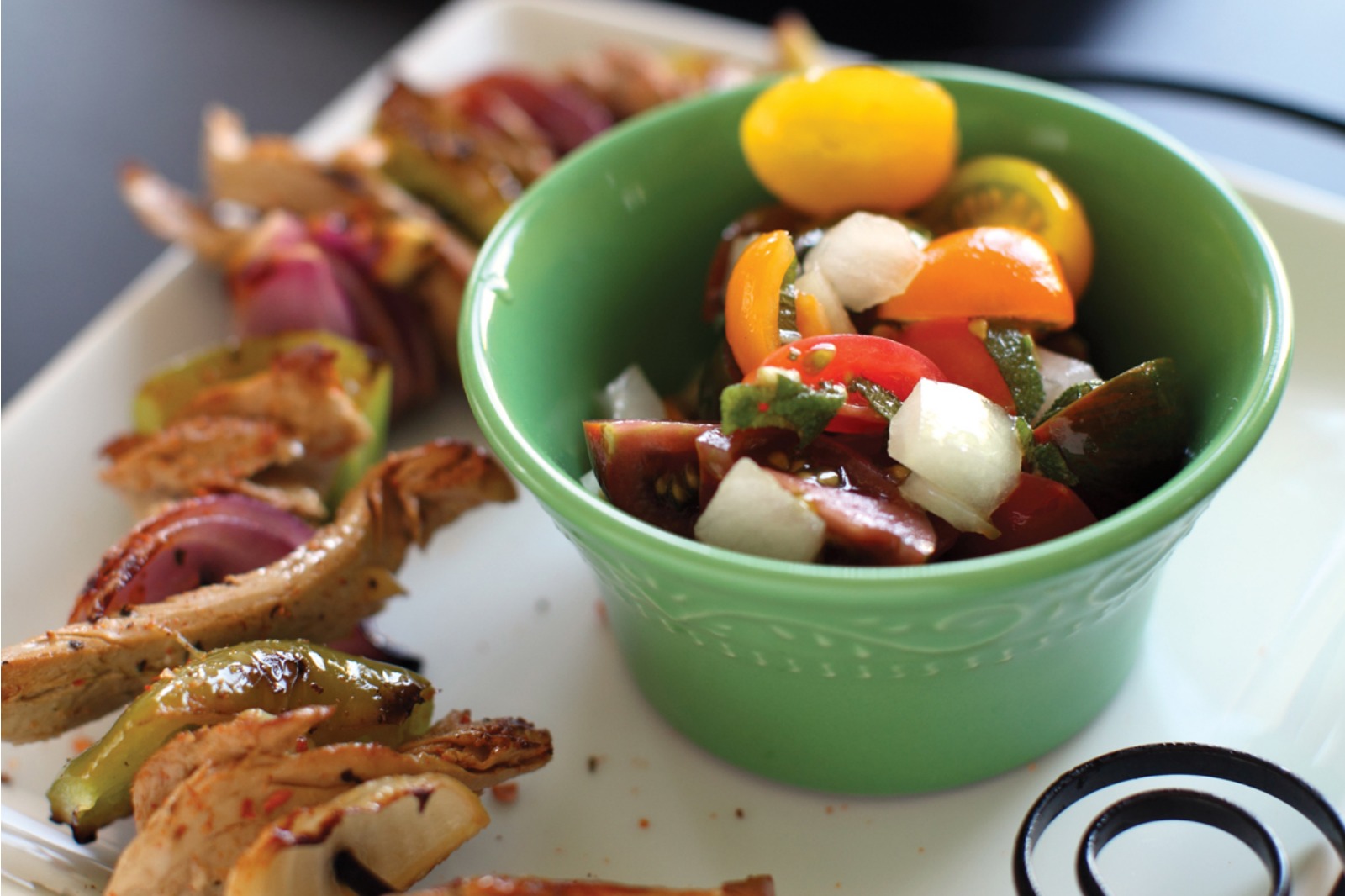 Marinades are often used to flavor and tenderize meat, but plant-based proteins need love too. Whether you’re cooking indoors or outdoors, on a grill or on the stove, you should consider using a flavorful marinade on your proteins. Any food tastes better after it’s had a long soak in a flavorful combination of aromatics, seasonings, and other ingredients. Most food absorbs liquid which means all that flavor gets inside and can amp up the volume on any dish.

But before you head out to buy one of those pre-mixed marinades in a bottle, consider making your own. Not only is it quick and easy to make your own, it’s less expensive than store-bought brands. Most importantly, when you make your own, you get to choose the ingredients including the amount of salt and sugar. You don’t need any fancy recipes – just throw together your favorite herbs, spices, and other ingredients. Be creative. You can’t go wrong. Here are some tips for using marinades to help make the most flavor-packed vegan dishes. 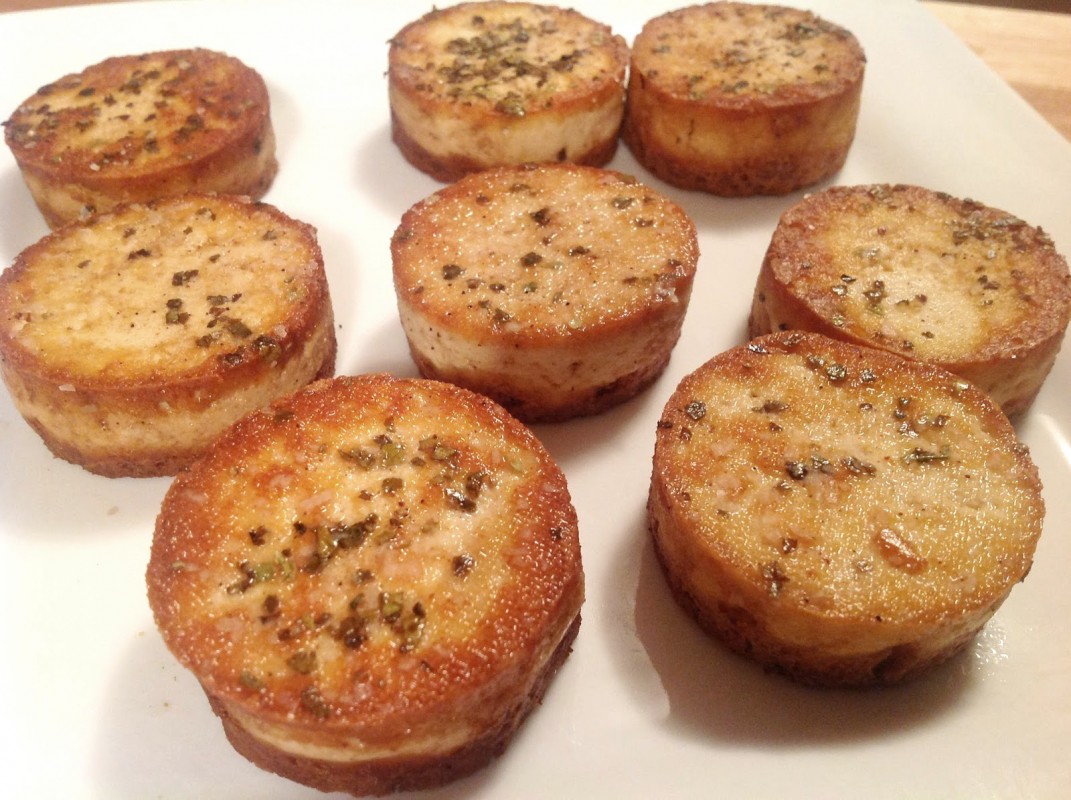 There are no strict rules about marinades, but there are guidelines. Marinades need to have liquids and at least one of those liquids should be acidic or enzymatic such as vinegar, citrus juice, pineapple or papaya juice, beer, vegan buttermilk or wine.

Other liquids that are added for flavor may include soy sauce or tamari, vegan Worcestershire sauce, fruit juices, vegetable broth, oils and water. Some kind of fat such as oil or non-dairy yogurt can add succulence to the flavors. Combine liquids and taste the marinade. It should taste like salad dressing but lighter. My Tofu Scallops have the simplest marinade of just tamari and water.

Add aromatics such as chili peppers and fresh grated ginger and garlic. Even if you put these items into the marinade whole, they will impart flavor and you can just remove them later. Add roughly chopped fresh herbs such as basil, parsley, cilantro, mint, or thyme. If you don’t have fresh herbs, you can use dried herbs. If you want heat, add red pepper flakes, hot sauce, harissa, chili oil, mustard or Sriracha. If you want sweet, add brown sugar, agave, molasses, or maple syrup.

Add salt according to your own tastes. If you are using a salty liquid like soy sauce, you most likely don’t need to add any other salt. Saltiness can also be added in the form of capers or olives, tamarind or miso paste. Keep tasting to make sure the flavors of the marinade are balanced. If you’re trying to cut back on salt, see Trying to Skip Salt? Here’s What to Use Instead for alternatives.

2. Everybody in the Pool 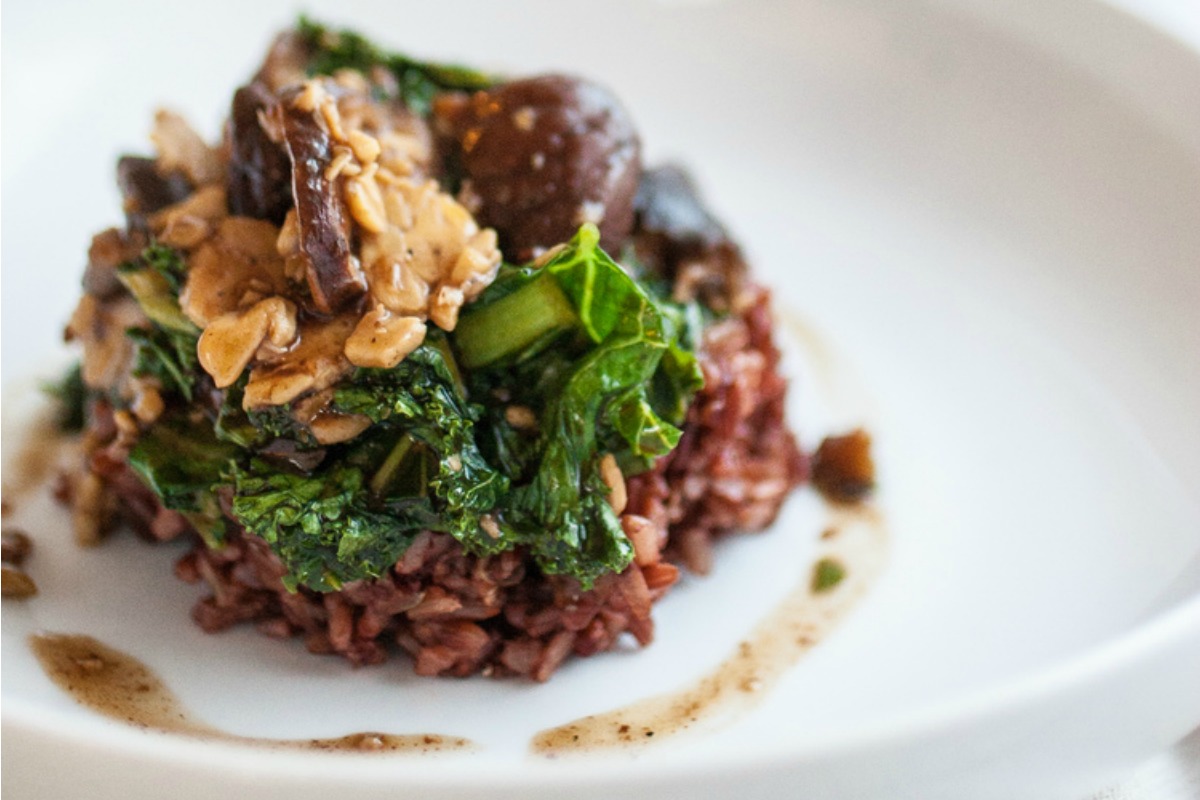 Most foods sitting in marinades should be placed in the fridge, especially if you are going to marinate them for a long time. Be sure to bring the food back to room temperature before cooking. If a food only needs to marinate 10 or 15 minutes, you can leave it on the counter so long as it’s not too hot in the kitchen. 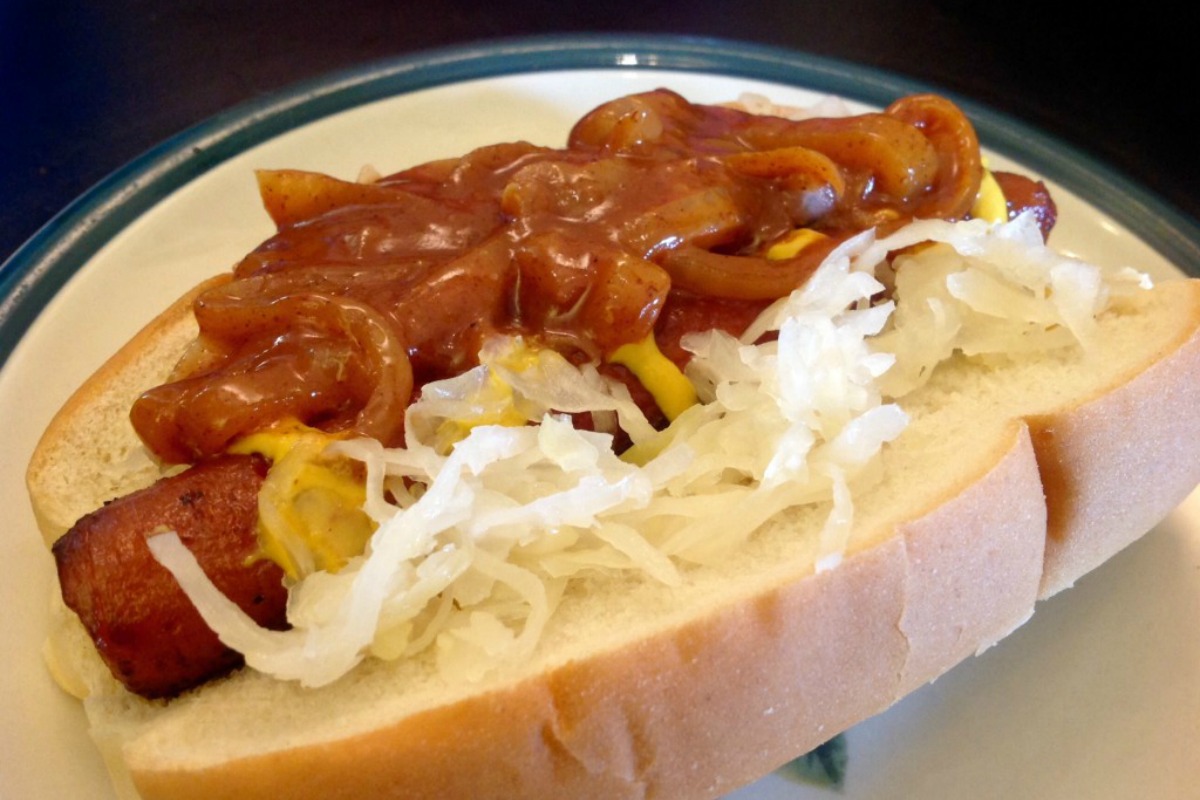 Depending upon the ingredient, recipe and the amount of time you have available, food can be marinated anywhere from 15 minutes to overnight. Soft vegetables like zucchini or eggplant should only be marinated for about 15 minutes or they will become too soggy. Harder veggies like potatoes and carrots can be marinated for half an hour though my Carrot Dogs take 24 hours for the savory flavors to really penetrate. Tofu, tempeh, and seitan can be marinated for longer periods, even overnight, but if you’re in a rush, 15 minutes in a marinade will make a big difference. A good example of a fast marinade is this Raw Lasagna With Cilantro Pesto, Sun-Dried Tomatoes, and Marinated Veggies.

Be careful, however, not to over-marinate foods. Too long sitting in the acid can turn foods mushy. As a rule, the stronger the acid in a marinade, the less time the food needs to marinate.

4. Everybody Out of the Pool 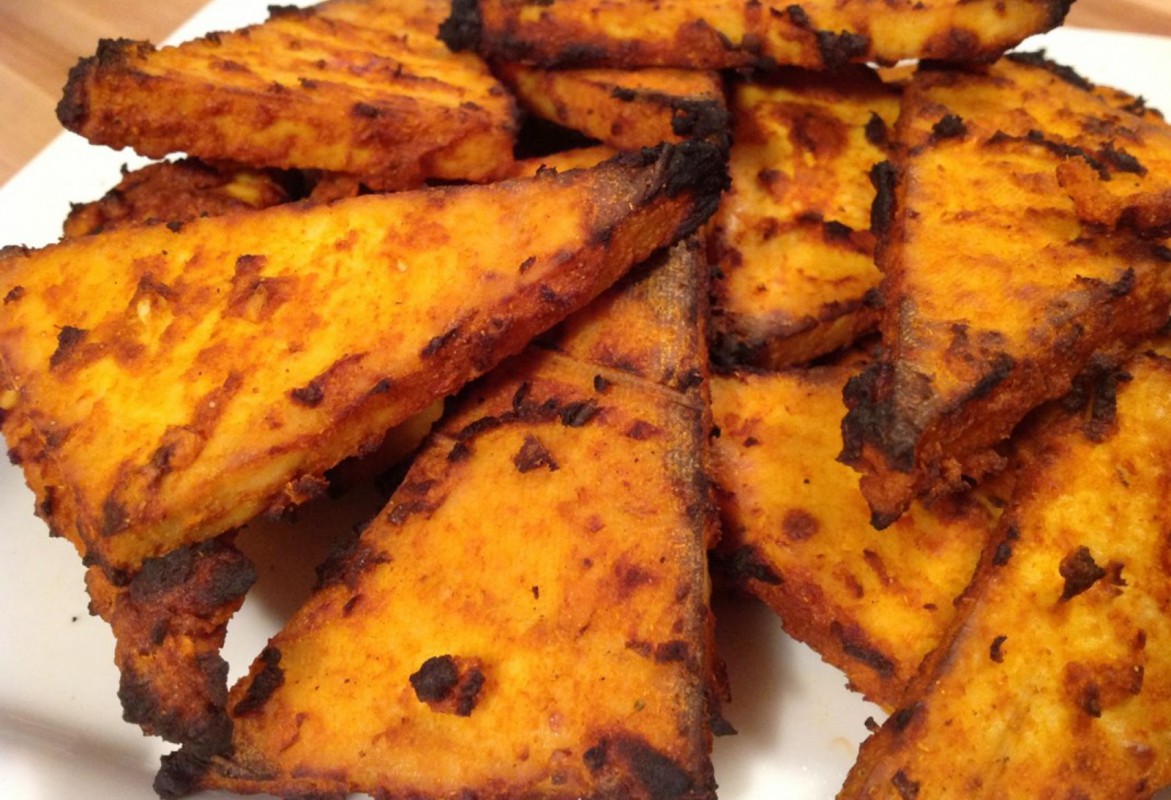 After the food has marinated, remove it from the liquid and pat it totally dry before cooking. If the food is still wet, it will not get a crispy crust and will just boil and be mushy.

Unlike with meat, marinades used for plant-based food can be reused if desired. Keep the remaining marinade in the fridge for two or three days if you plan to use it again.

Marinades are useful even once the cooking has begun. I often reserve the marinade and then use it near the end of cooking to create a sauce for my dish. When grilling, it is good practice to brush the marinade onto the food at intervals during the cooking and at the end. I do this with my Tandoori Tofu.

If a marinade contains sweeteners like sugar, agave, or molasses, it will burn quicker so you have to watch the food more closely to prevent it from burning. This can be seen in the recipe for Chicken-Free Satay with Peanut Dipping Sauce. 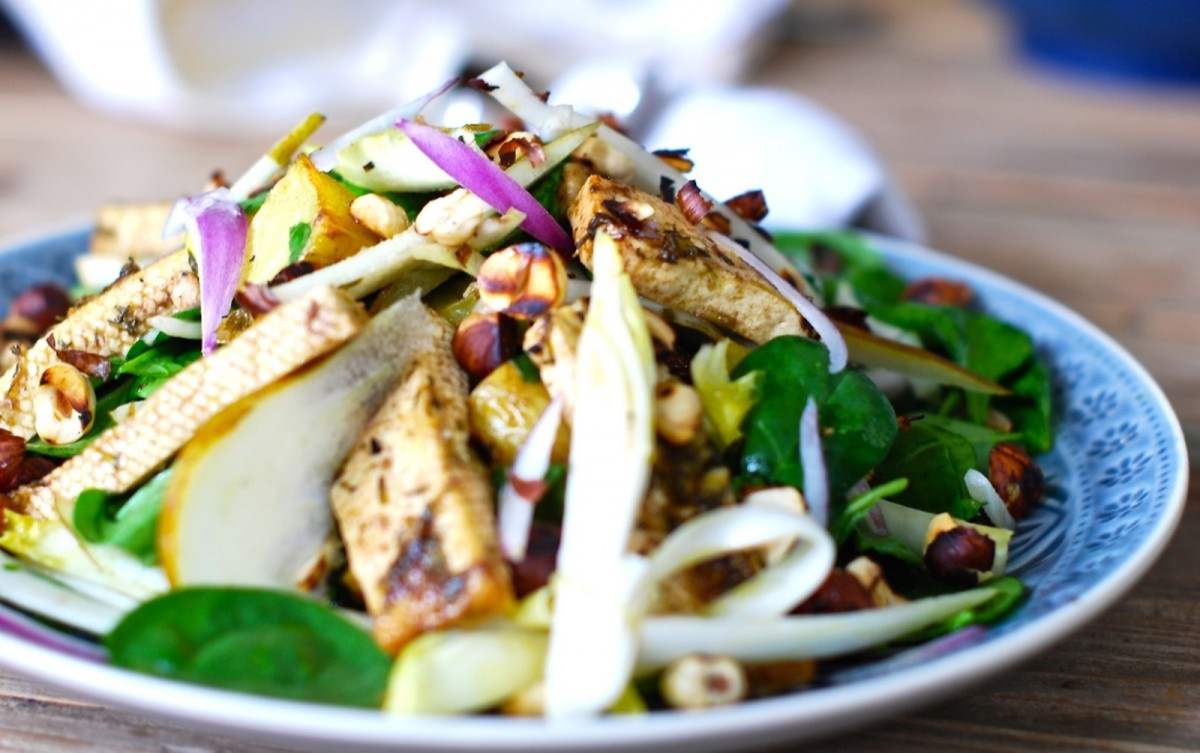 Technically, you can marinate any foods you like, but those that can absorb liquids are at the top of the list. Tofu should be marinated after it’s been pressed and drained. You need to get all the water out so the marinade can go in. Tofu can be marinated whole or cut up in slices or cubes as in my Sesame Tofu. Check out these 6 Fantastic Marinades for Tofu That Will Make Your Taste Buds Dance and then try it out in this Warm Salad With Marinated Tofu, Potatoes, and Hazelnuts.

Tempeh absorbs marinades well, again whole or in slices. Try this Soy Maple Tempeh Bowl which has a quick marinade and this flavorful Shiitake Tempeh and Kale Stir-Fry. Seitan usually gets its flavors from the liquids and spices used when making it, but sliced seitan can also be marinated for more flavor and/or specific recipes. These Seitan Kebabs With Sangria Tomato Salad is a delicious example of using a flavorful marinade. 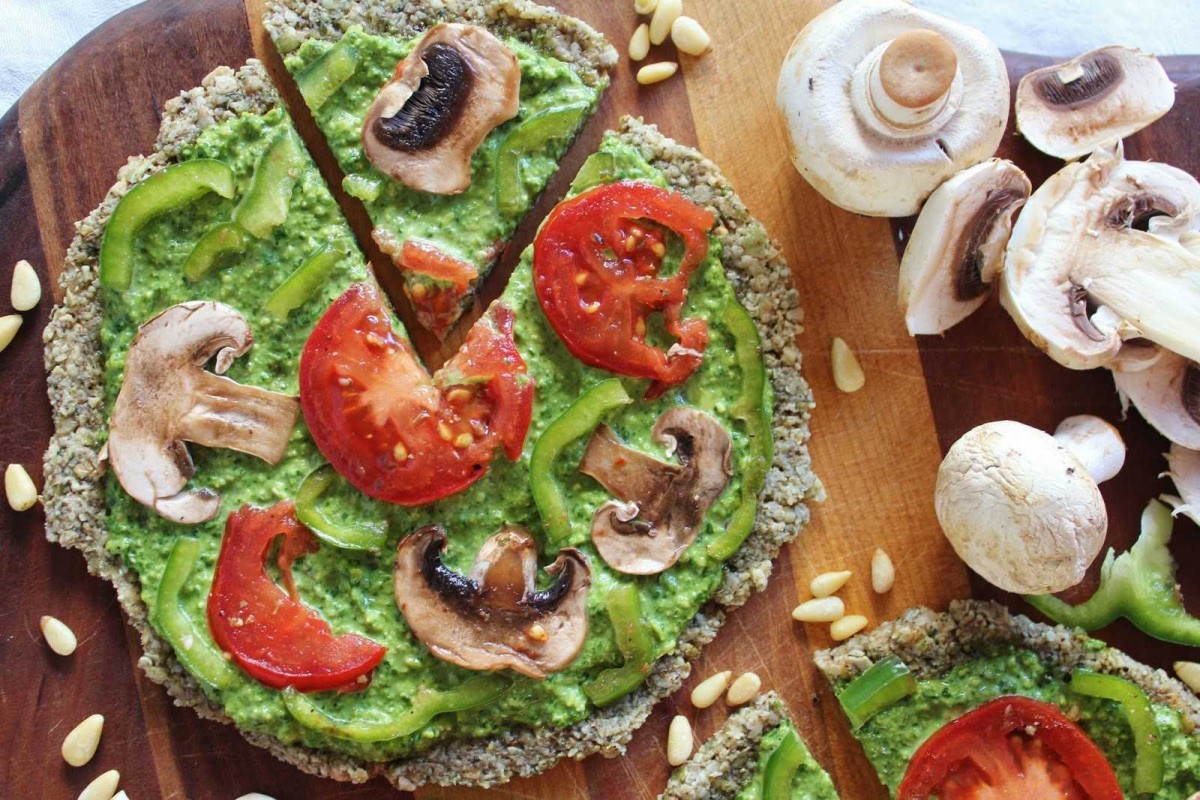 All vegetables can be marinated. Those with mild flavors such as zucchini, cauliflower and potatoes take especially well to being marinated. My Carrot Dogs are made to taste like hot dogs by sitting in a savory marinade for 24 hours. Marinades are also a great way to get flavor into raw dishes. Try this Raw Vegan Curry With Marinated Mushrooms and Onions, Raw Lasagna With Cilantro Pesto, Sun-Dried Tomatoes, and Marinated Veggies and Raw Vegan Pizza with Spinach, Pesto, and Marinated Vegetables. Fruits can also be marinated which is especially good if you are going to grill them like these Grilled Fruit Kebabs.

Food can never get enough flavor, and marinades are an easy and inexpensive way to accomplish that. Even if you only have 15 minutes, try a quick marinade and see the difference it makes. For more marinade recipes, see The Ultimate Guide to Making Flavor-Packed Marinades for Plant-Based Dishes.