What is Lemongrass and How Do You Use It? 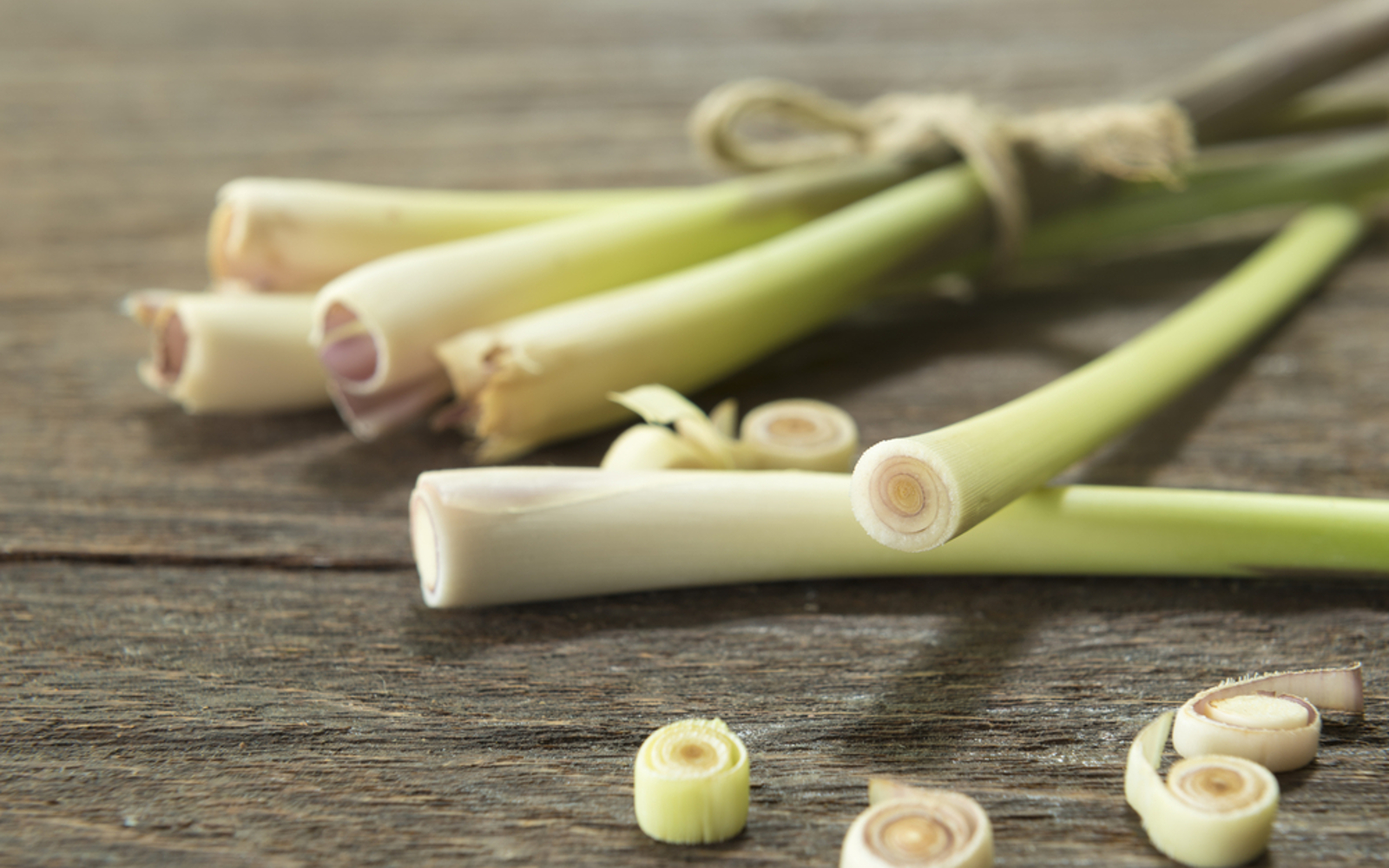 If you’re a big tea-drinker, you’ve probably tried lemongrass tea at some point. Bright and citrusy, lemongrass herbal tea has long been a part of certain traditional medicines. But, did you know that you can also use it in cooking? Here’s why you should try using lemongrass, especially if you are a fan of Thai or Vietnamese cooking.

Lemongrass, also known as lemon grass and citronella grass, is a perennial grass that grows in tropical climates. The stalks grow in clusters, similar to spider plants, and can reach anywhere between six to ten feet in height. A stalk of lemongrass consists of a pink base, a few tough green husks, and a white core, which is what is used in cooking. The flavor of lemongrass is characterized by mild citrus notes. It is especially popular in Thai and Vietnamese cuisine, where it is a common ingredient in soups, meat, and seafood dishes. It is also popular in Africa, where it is brewed as tea and India, where it is used as a medicinal herb. Today, India is the world’s top commercial producer of lemongrass, growing over two million pounds per year.

When choosing lemongrass in the store, look for firm, not rubbery stalks, that transition from pale yellow at the base to bright green in the husks. If it can be avoided, do not choose lemongrass where the leaves are starting to brown. If you don’t plan to use lemongrass immediately, the stalk should be tightly wrapped and stored in the refrigerator, where it will keep for up to two weeks. It can also be frozen, though it may lose some of its flavor. It can also be cut into small pieces and dried. Once your cut lemongrass has dried out, store it in a mason jar or airtight container. Finally, if your lemongrass has dried out before you’ve gotten the chance to cook with it, plant it in a pot of moist, rich soil. Within ten days, new green leaves should grow.

Nutritional and Medicinal Properties of Lemongrass 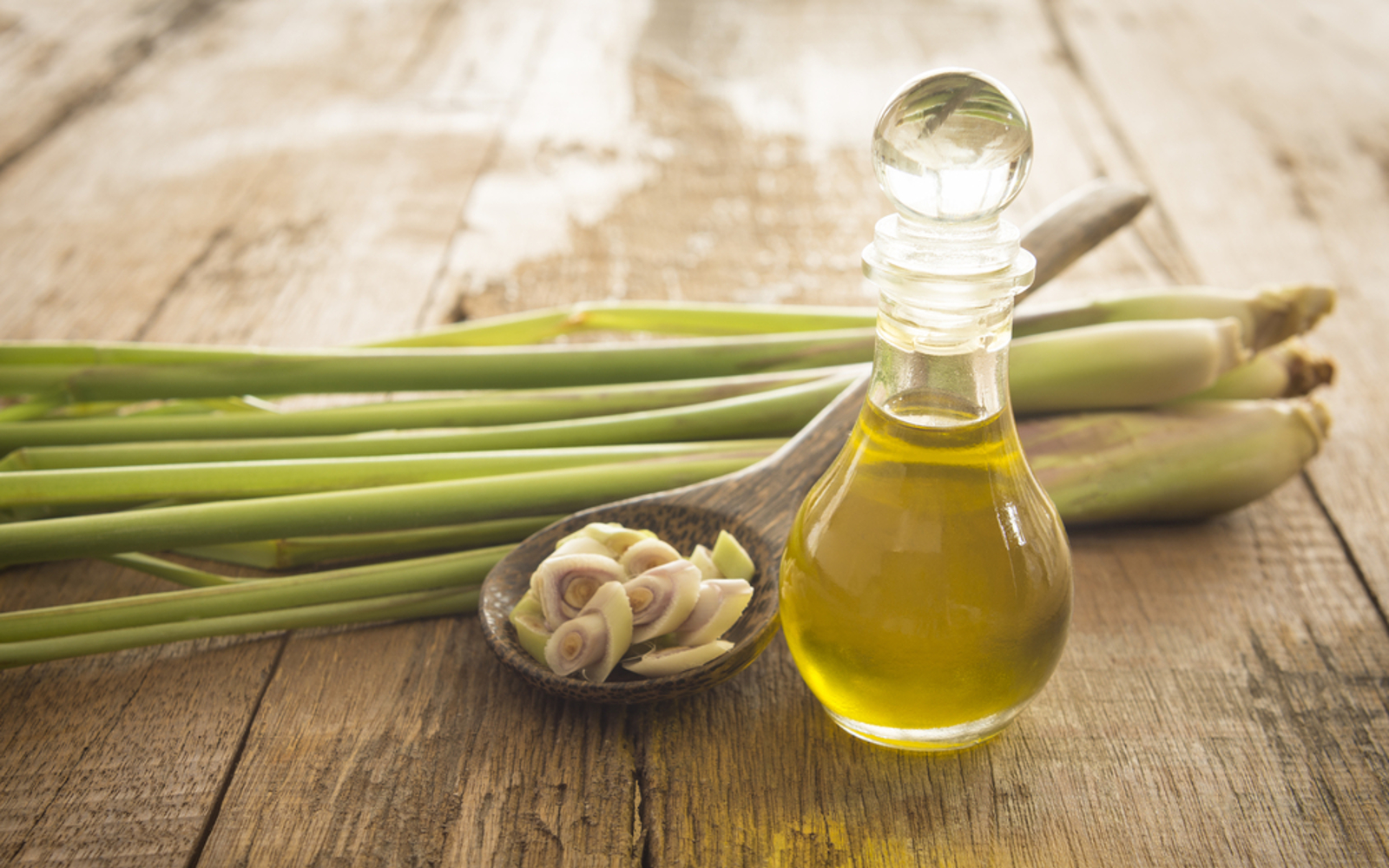 Just one tablespoon of lemongrass contains .4 milligrams of iron, or five percent of the recommended daily intake (RDI) for men and two percent for women. One tablespoon also contains 1one percent the RDI of folate, potassium, magnesium, zinc, and phosphorus. Studies have connected the regular consumption of lemongrass to a lower level of LDL cholesterol. Lemongrass is high in several antioxidants and one of the main components of lemongrass, citral, is also known to have anti-microbial and anti-fungal properties.

In addition to adding citrus-y notes to many East Asian dishes, lemongrass has long been used as a treatment for a number of ailments and diseases in Ayurvedic medicine. Lemongrass tea is used as a diuretic for flushing toxins out of the body, to shed water weight, and to provide a sense of calm and tranquility. In Ayurveda, lemongrass is believed to be a cooling herb that calms and revitalizes both body and mind. In aromatherapy, lemongrass oil is also believed to bring a sense of calm and is also used to treat symptoms of headaches, body-aches, nervous exhaustion, and stress-related conditions.

How to Use Lemongrass 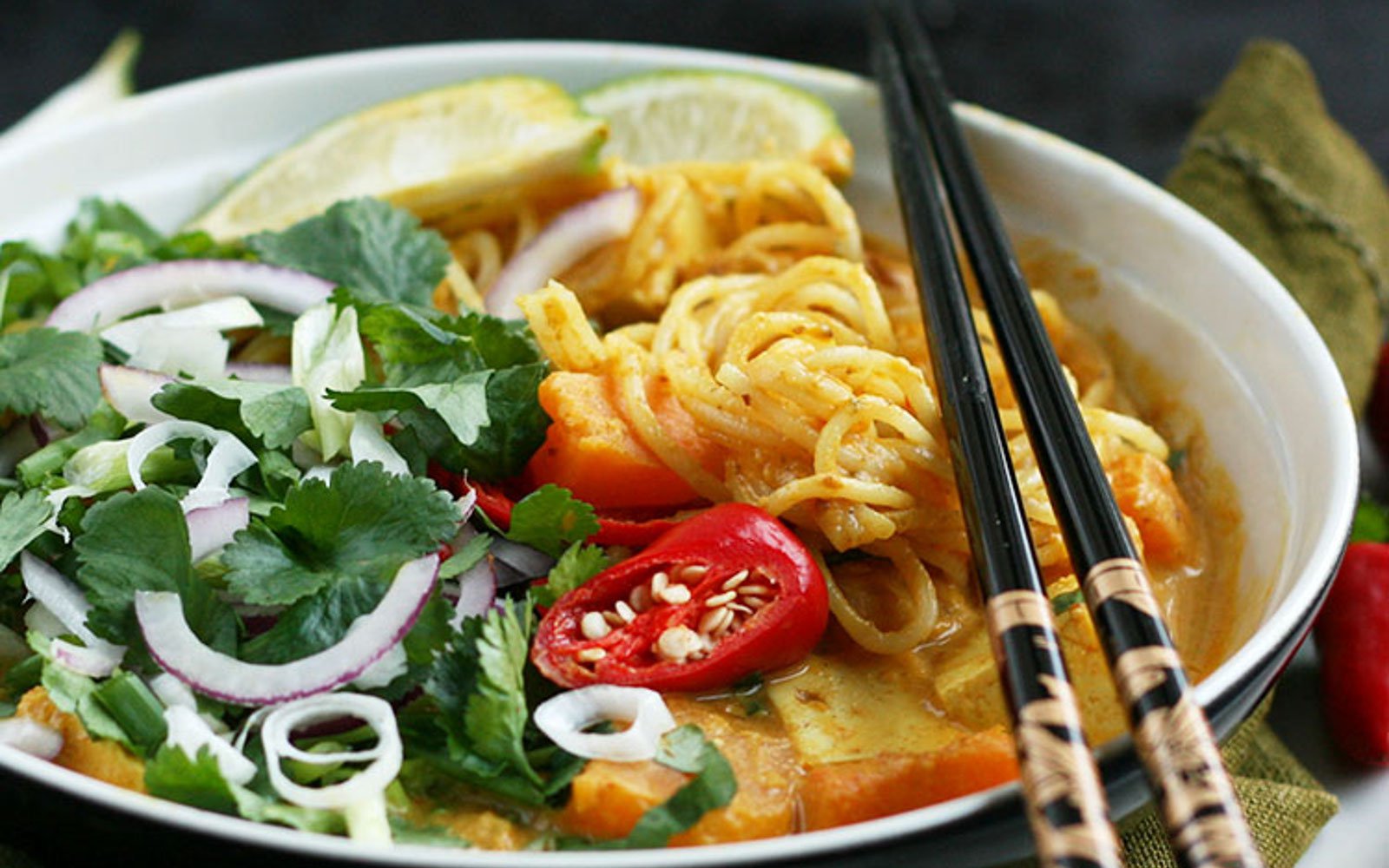 Lemongrass is widely used in Asian cooking to add citrus flavor to soups, curry, and to flavor meat and seafood. But how do you use it? The best way to prepare a dish with lemongrass is to bruise the stalk in order to release the essential oils, which makes the flavor stronger. To do that, trim the spiky top and base, remove the husks, then crush the stalk using a pestle or the flat side of a kitchen knife. You can then add lemongrass to the soup or curry that you are cooking. Like bay leaf, lemongrass should be removed from the dish after it has been sautéed to release essential oils.

Cook bruised and knotted lemongrass at the start of the dish, the same way you would use aromatics such as shallots, onion, ginger, and garlic. You can also peel back the husks and chop the stalk using a sharp knife, as in this Coconut Lemongrass Soup, this Malaysian Laksa, or this Lemongrass Green Coconut Curry Soup. The citrus notes would taste even stronger if you were to use bruised lemongrass, as in this Tom Yum Soup.

Lemongrass can also be chopped and ground into an aromatic paste for soup, as in this Thai Cut Rice Noodle Soup or this Spicy Curry Laksa or used to flavor meaty dishes, such as this Indonesian Stir-Fried Tempeh or these fusion Lemongrass Tofu Burgers. 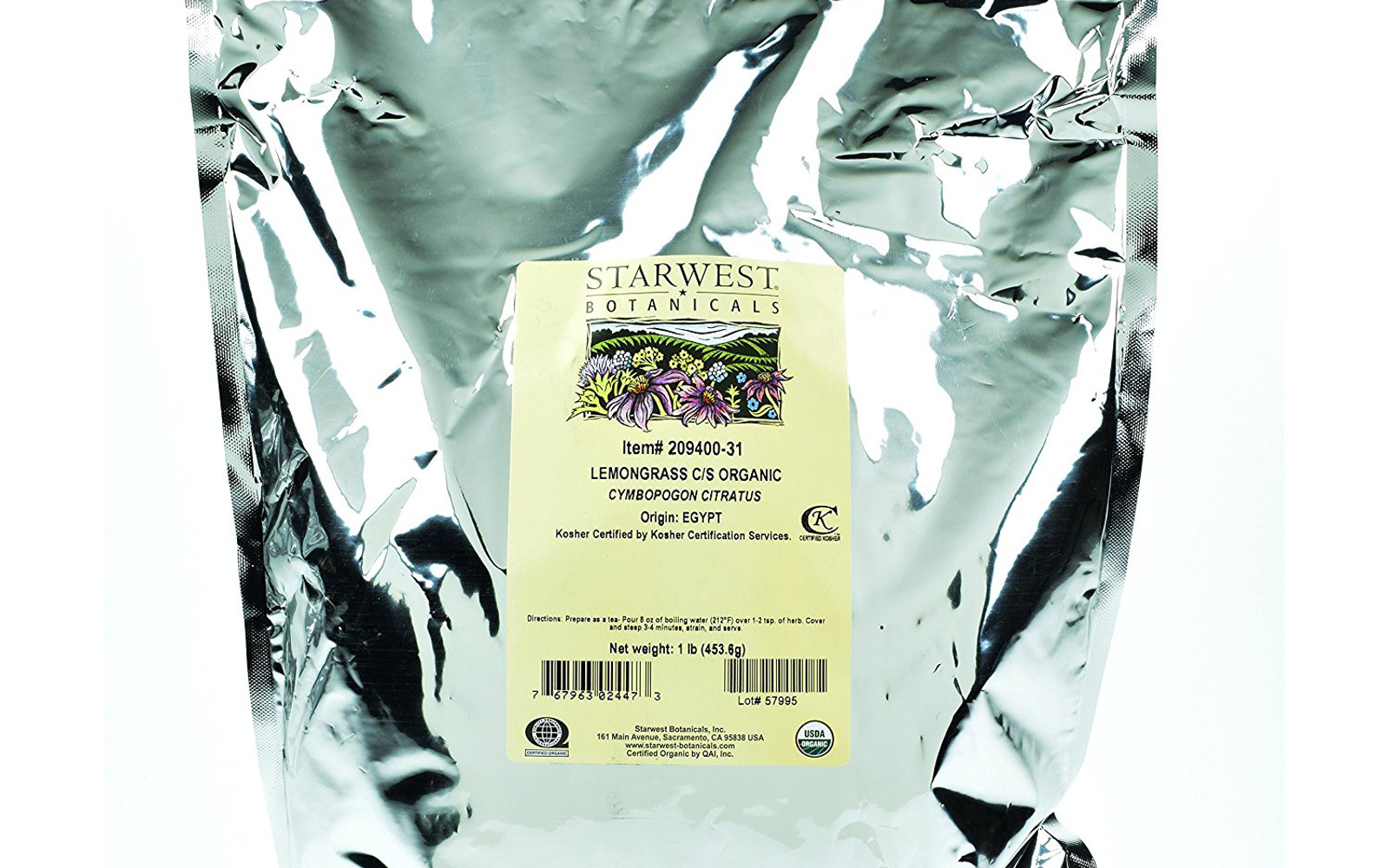 Unless you live near an Asian grocery store, it’s not likely that you will come across lemongrass, but it can never hurt to check where the fresh herbs are, especially in grocery stores like Whole Foods. Otherwise, you can buy lemongrass online — yes, even fresh lemongrass, like these Fresh Lemongrass Stalks by TastePadThai. One bundle of 12 stalks costs $13.50. Or, pick up dry lemongrass, like this Starwest Botanicals Organic Lemongrass. A one-pound bag costs $14. And during the summer, you can try growing your own lemongrass. Just pick up a packet of these Lemongrass Seeds by Nuts n’ Cones. A pack of 500 seeds costs $2.45. 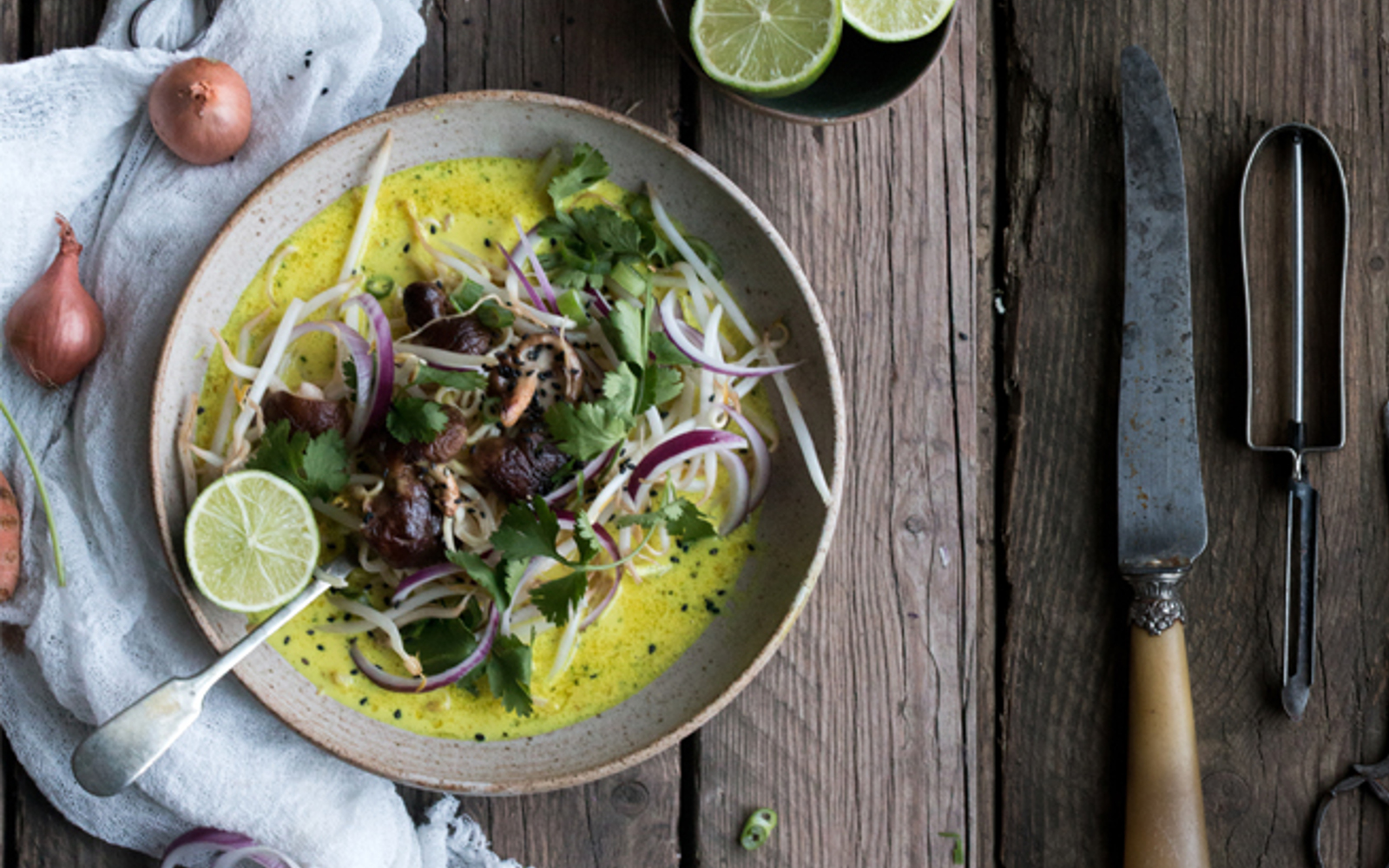