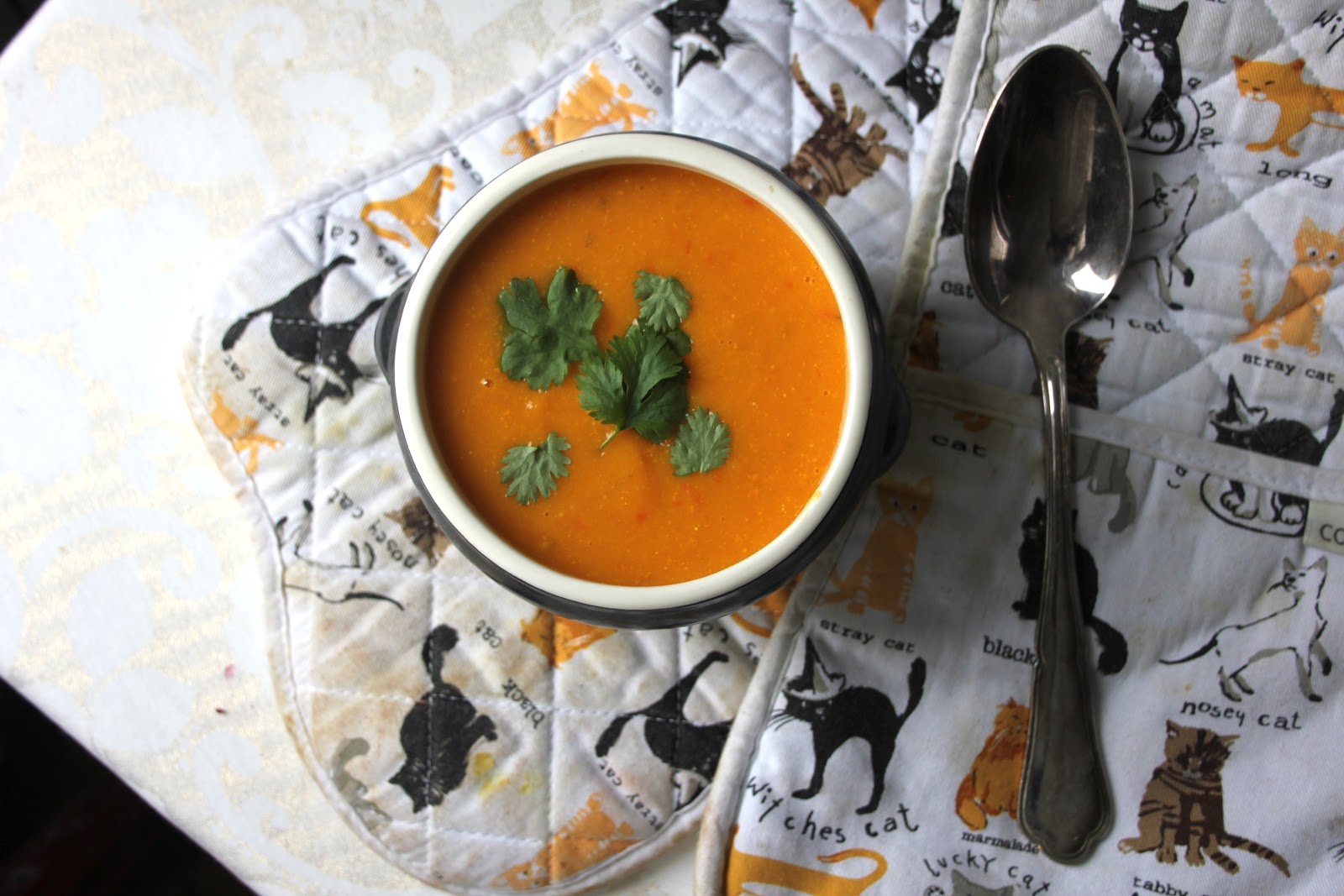 When the weather gets colder, I want soup, but it can get boring making the same five or six soups all the time. That’s when it’s time to break out the herbs and spices and go international. When you know the flavor profiles of all the different ethnic cuisines, you can make soups that will make you feel like you’re eating in another part of the world with every bowl. Of course, I can’t hit every single country and their representative soups, but I can share 10 of my favorite cuisines and lots of delicious soup recipes from the Food Monster App that have international appeal. Get ready to be warmed up and well-fed with these global soups.

This is the soup I always want when I feel a cold coming on. I believe that eating ginger and garlic in large doses will help me fight off whatever ills may be brewing. To make my Garlic and Ginger Soup with Noodles: in a large saucepan, combine 2 vegetable bouillon cubes and 6-8 cups water or add 6-8 cups of vegetable broth over medium-high heat. Add ½ of a chopped onion, 3 sliced carrots, 3 chopped celery stalks and 4 oz. sliced mushrooms to the broth. Mix in 4 cloves of minced garlic, 1 Tbs. fresh minced ginger, 1 tsp. dried oregano, 1 tsp. kosher salt, 1 tsp. kelp or dulce flakes, ½ tsp. celery seed, ½ tsp. dried dill, ½ tsp. ground turmeric, and ½ tsp. black pepper. Bring soup to a boil and then reduce the heat to low and cover the pot. Let the soup simmer about 15-20 minutes to develop its flavor. Right before eating, return the soup to a boil and add 8 oz. noodles to the pot. Let cook according to the package directions or until the noodles are al dente. Taste the soup for seasoning adjustments and serve while hot. Give any of your favorite soups Asian flavors by using Chinese herbs and spices.

My grandfather was my favorite person in the world. He used to love eating borscht or beet soup. When I learned to cook, I made my own borscht to honor him. I call it My Papa’s Borscht and it’s easy to make: Boil 6 red beets that have been peeled and chopped in 3 cups of salted water for 20 minutes or until fork-tender. Strain the beets and reserve the liquid. Let the beets cool and then cut them into chunks. In the same pot, heat 1 Tbs. oil and saute 1 minced red onion, 1 finely diced stalk of celery, 1 finely diced carrot and 1 minced garlic clove until tender, about 6-8 minutes. Add the beet cooking liquid, 3 cups low-sodium vegetable broth and 2 Tbs. apple cider vinegar. Simmer for about 30 minutes. Add 1 Tbs. fresh dill and kosher salt and black pepper to taste. For a smooth soup, strain the veggies out or keep them in for a chunkier soup. Serve hot or cold with a dollop of vegan sour cream. Use the beet greens to make a salad to go on the side of your borscht.

My mother often made Pasta e Fagioli which was pronounced “pasta fazool.” It’s an Italian soup made with beans and pasta. It is famously mentioned in the 1953 (no, I wasn’t alive yet) Oscar-nominated Dean Martin song, “That’s Amore.” Everyone knows the first line, “When the moon hits your eye like a big pizza pie, that’s amore.” The soup shows up in the second line, “When the stars make you drool just like pasta fazool, that’s amore.” Well, as a kid, I had no “amore” for beans at all but now that I’m all grown up and more schooled in the art of cooking, I have lots of “amore” for soups filled with beans and pasta. And because I love dark, leafy greens to everything I make, my pasta fazool has that too.

To make my Pasta e Fagioli: in a large stockpot, heat 1 Tbs. oil over medium heat. Saute 1 diced onion for about 4 minutes until softened. Add 3 thinly sliced scallions, 1 large diced carrot, 2 ribs of diced celery, and 2 cloves minced garlic to the pot. Let cook for 4 minutes until the vegetables soften. Mix in 1 tsp. dried rosemary and ¼ tsp. red pepper flakes. Stir in 6-8 cups vegetable broth and/or water and 2 cups chopped tomatoes. Bring the soup to a boil. Reduce the heat, cover and simmer for 10 minutes. Add 1 ½ cups cooked pinto beans and 3 cups cooked fusilli or other small pasta. Season the soup with salt and black pepper to taste. Add 1 large bunch of chopped chard, kale or other greens to the pot. Do not stir. Cover the pot and let the greens steam until they are a verdant, bright green. Uncover the pot and stir in the greens. Serve while hot. Sprinkle with vegan grated parmesan, if desired. For other favorite Italian soups, try this Minestrone Soup and this Escarole and White Bean Soup.  Give your soups an Italian spin with 10 Italian Spices that Will Spike Up Your Meals.

The Mediterranean includes countries with some of the most amazing food in the world including France, Italy, Greece, Spain, and Portugal. One of my favorite soups is Caldo Verde or Portuguese Kale Soup. Caldo Verde is Portuguese for “green broth” and is often served at Portuguese celebrations. Caldo Verde typically contains potatoes, onions and kale. In my interpretation of this soup, I used all these ingredients plus cannellini beans and vegan sausage for added heartiness and yumminess. To make my Caldo Verde: In a large pot, heat 1 Tbs. of oil over medium-high heat. Cut 4 links of vegan sausages into coins and add them to the pot. Cook them until they are just browned on both sides, about 5 minutes. Remove the sausage from the pot. Do not eat them. Ok, you can taste one piece but just one. Yeah, good luck with that. If the pot is dry, a 2nd Tbs. of oil. Add 8 halved Yukon gold potatoes and 1 large chopped onion. Cover the pot and let cook for 5 minutes, stirring occasionally. Add 4 cloves minced garlic, 2 fresh bay leaves and 6 cups chopped kale to the pot. Cover and let cook for 2 minutes or until the kale starts wilting. Add 1 ½ cups cannellini beans, 2 cups diced tomatoes and 6 cups vegetable broth. Add salt and black pepper to taste. Bring the soup to a boil. Reduce the heat to low, add the sausage back in (whatever’s left of it), cover the pot and let simmer about 15 minutes or until the potatoes are fork-tender. Taste for seasoning. Serve hot, preferably with crunchy bread for dunking.

When the weather gets cold, I want to make soup that is hot – both temperature hot and spicy hot.  That’s when I make my Spicy Black Bean Soup. It’s really quick and easy to make, though the longer you let it cook, the more the flavors intensify. To make my Spicy Black Bean Soup: Heat 1 Tbs. oil in a large soup pot over medium-high heat. Add 1 large diced onion and let cook for 5 minutes until softened. Add 1 large diced carrot, 1 diced Yukon gold potato and 6 cloves minced garlic and let cook another 5 minutes. Add 4 oz. diced green chiles and 2 cups diced tomatoes and stir to combine. Mix in 1 tsp. each ground cumin, ground coriander, dried oregano, and smoked paprika, ½ tsp. black pepper and a fresh bay leaf. Don’t add any salt now since the flavors will intensify as the soup cooks. Add it at the end. Add 3 cups cooked black beans to the soup and then 6 cups low-sodium vegetable broth. Cover the pot and bring the soup to a boil.  Then remove the lid, lower the heat and let simmer for at least 45 minutes. The longer it cooks, the more the flavors will intensify. Before serving, taste the soup to see if it needs salt. Add 2 Tbs. fresh chopped cilantro and remove the bay leaf. Serve in bowls topped with vegan sour cream, avocados or tortilla chips.

For more Mexican flavor in a bowl, try this Magical Roasted Corn and Lime Tortilla Soup.

Growing up, I loved split pea soup that was thick, comforting and simple. As a twist from ordinary split pea soup, sometimes I like to kick mine up with some Moroccan spices guaranteed to warm me up, not to mention reap the added health benefits of the ginger, curry, turmeric, cinnamon and red pepper flakes. To make my Moroccan Split Pea Soup: Heat 1 Tbs. vegetable oil in a large pot over medium-high heat. Add 1 large chopped onion and let cook for 4 minutes until softened. Add 2 chopped celery stalks, 2 small diced potatoes, 1 large diced carrot, and 3 minced cloves garlic. Stir and cook for 5 minutes. Add 1 Tbs. fresh grated ginger, 1 tsp. black pepper, 1 tsp. ground cumin, 1 tsp. ground paprika, 1 tsp. ground coriander, ½ tsp. dried oregano and salt to taste. Stir to incorporate the spices. Saute for about 6 minutes until the vegetables are softened. Add 1 ½ Tbs. curry powder, 1 tsp. ground cinnamon, ½ tsp. ground turmeric, ¼ tsp. red pepper flakes, and 1 fresh bay leaf. Stir for 30 seconds until fragrant. Add 1 lb. split peas that have been soaked for at least half an hour. Stir in 6-8 cups vegetable broth or water and bring to a boil over high heat. Reduce heat to low and let simmer uncovered about 90 minutes, until it is at the desired consistency. If you want, you can use a potato masher to mash up some of the split peas and stir well to mix and thicken the soup. If you want it really smooth, you can always put parts of the soup into a blender or use an immersion blender but I like my soup chunky. Top with croutons or vegan sour cream, if desired. Serve while hot.

The most well-known soup of Spain is gazpacho. Gazpacho is filled with tomatoes, cucumbers, peppers and other vegetables.  Learn how to make your own healthy gazpacho and savor this refreshing soup. There are also variations of gazpacho that are quite different than the tomato-based soup one usually thinks of. This Watermelon Gazpacho with Beet Noodles is pretty in pink. Also try this Watermelon Gazpacho and this Raw White Gazpacho Soup.

My love of Thai food only developed recently, but I know I love the flavors you get when lemongrass, garlic, ginger, scallions, curry paste, hot peppers and coconut milk get together. Fresh corn, bell pepper, baby spinach, curry powder and coconut milk make this Thai Corn Soup rich, creamy and delicious. It only takes a little coconut milk and warm, fragrant spices to make this Thai Carrot Soup comforting and full of flavor.

If you have enjoyed this travelogue of soups, there are even more to discover all over the world. For a few more delicious soup ideas, check out “35 Bold and Beautiful Soups for National Homemade Soup Day.” What’s your favorite international soup? Let us know in the comments. Also, make sure to check out Our Ultimate Guide to Vegan Soup Recipes! for all of our favorite soup recipes! For more delicious recipes, download the Food Monster App, where you’ll find over 15,000 vegan and allergy-friendly recipes.