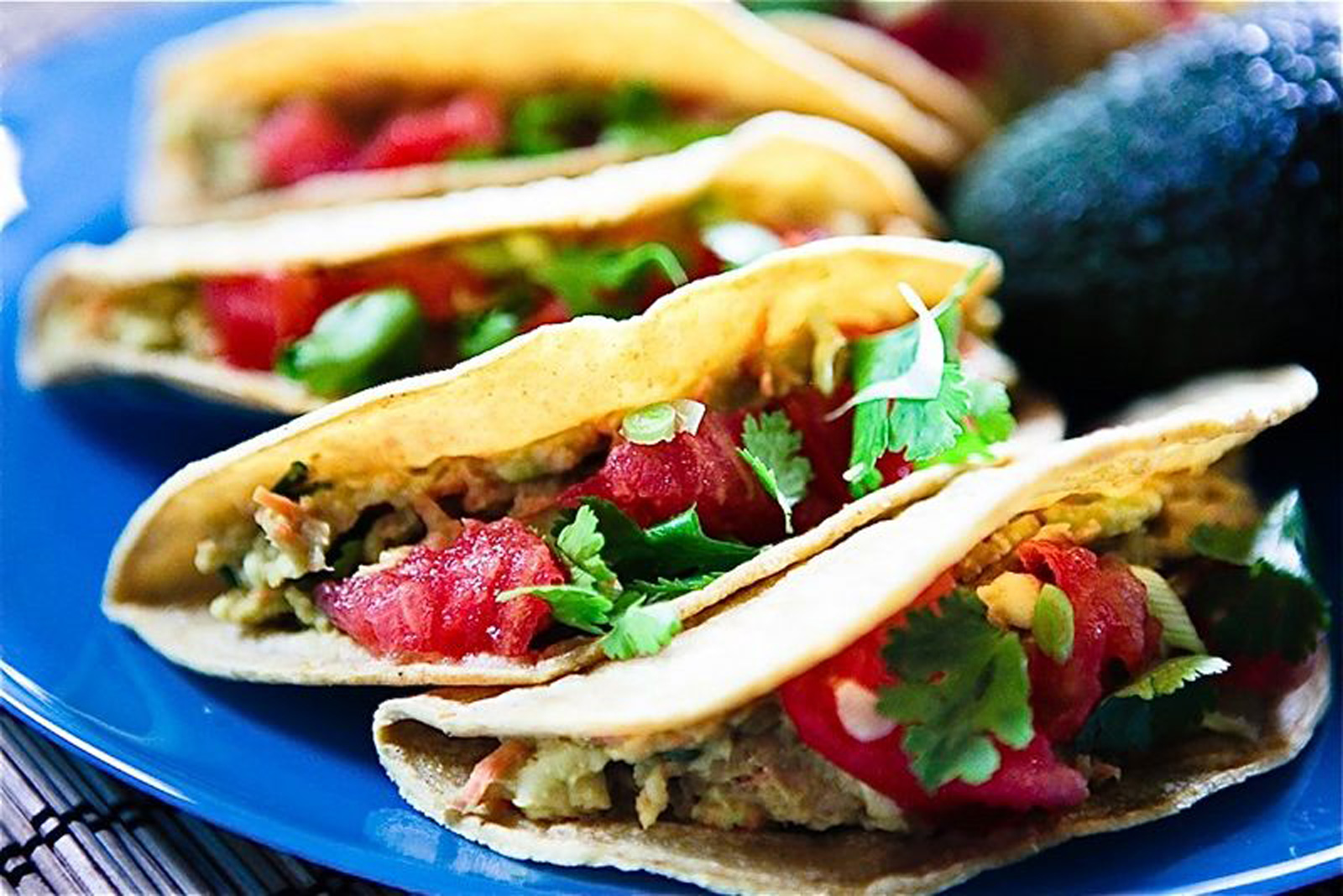 Everyone loves tacos. The traditional Mexican dish is versatile and delicious. Classic tacos are made with meat, fish, vegetables and cheese with garnishes that may include salsa, guacamole, tomatoes, onions, lettuce and cilantro. The taco shell can be hard or soft. They can be made with corn or wheat tortillas, they can be folded or rolled around the filling and those fillings can be anything you want it to be. Tacos are a great dish you exercise your creativity with.

Sure, you can make Mexican-flavored tacos, but you can also make Indian tacos, Italian tacos or any ethnic cuisine you like. Tacos are perfect for breakfast, lunch and dinner. Tacos not only taste amazing, but they are fun to make and eat. Set up a bar with taco shells, different filling ingredients and lots of garnishes to choose from, and let everyone make their own individual taco. Kids will really enjoy getting to decide what goes into their taco and of course, any food you can eat with your fingers is automatically a winner.

To heat up hard taco shells: bake at 350 degrees for 5 minutes. To heat up soft tortillas: heat in a dry skillet for 30 seconds per side. Here are some of my favorite taco fillings to inspire your own creations.

My Mexican Tofu Scramble Tacos are filled with Mexican Tofu Scramble – tofu, black beans, green chiles, fresh cilantro and lots of spices. To make them, brown corn or flour tortillas in a dry skillet or char them directly on the burner. Spread some guacamole down the center. Add a large spoon of the Mexican Tofu Scramble and top with fresh salsa or pico de gallo. Add other toppings such as vegan sour cream, sliced black olives and lime. Fold and eat. Serve with rice, sauteed garlicky greens or hash browns. 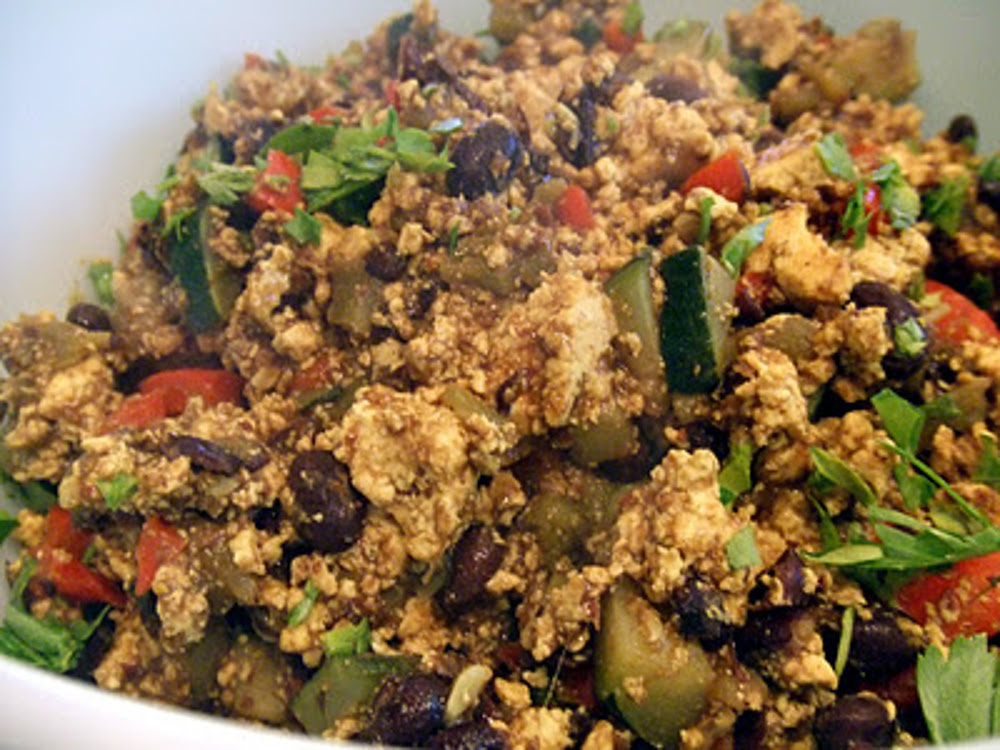 I love making vegan “fish” tacos with strips of my Tempeh “Fish” Fillets. The tempeh is pan-fried in a chickpea batter that is flavored with Old Bay, lemon zest and kelp flakes. On top of the tempeh, make a tangy slaw made from shredded red cabbage, thinly sliced red onion, chopped cilantro and lime. In lieu of tartar sauce, I make a dill remoulade by mixing vegan mayo, vegan sour cream, Dijon mustard, dill relish, scallions, dill, garlic and the zest and juice of a lemon or try this Lemon Dill Remoulade instead. Put all this in flour tortillas charred on the oven burners for delicious and healthy tacos. 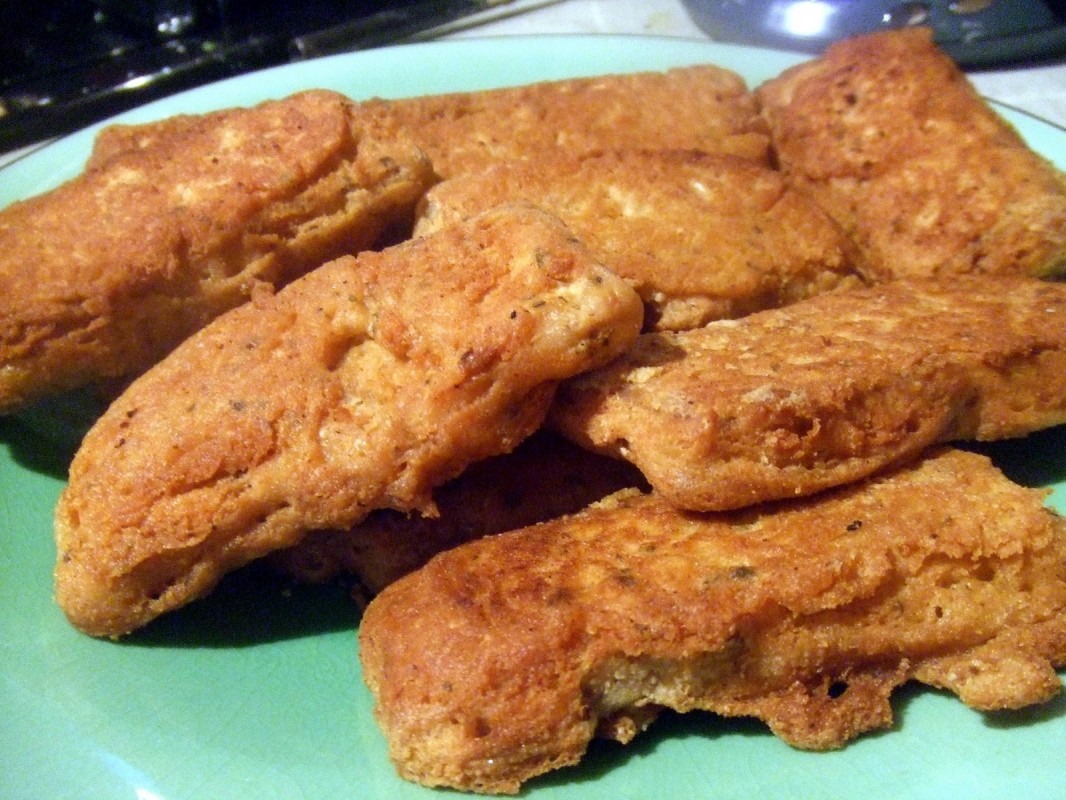 This filling is very simple, but it’s also very tasty. I figured I should include it because I’m actually eating this as I type. I use a wide vegetable peeler to make long, thin matchsticks of carrots, celery and zucchini and then cut those long strips into smaller pieces. I heat up flour tortillas in a dry skillet until they brown on both sides. Spread a bit of vegan mayo onto the tortilla and top with some of the veggie strips. Sprinkle some hot sauce on top and roll up the tortilla. It has crunch, creaminess and spiciness in one healthy taco. Use whatever veggies make you happy.

Lately, I’ve been into sweet potato sandwiches, so why not sweet potato tacos? Peel and dice 2 or 3 sweet potatoes and toss them with 2 Tbs. olive oil and ½ tsp. each chile powder, cumin, coriander and salt. Roast at 425 degrees for 30 – 40 minutes. Transfer the cubes to a skillet that has 2 tsp. oil heated in it. Add 2 cups cooked black beans, mix and cook until the beans are warmed through. Season with salt and pepper to taste. Serve in tortillas with vegan sour cream and vegan cheese shreds.

One of my favorite entrees is my Portobello Mushrooms with Artichoke Hearts and Sundried Tomatoes. Sometimes I like it as is on a dish, while other times I put it on a toasted hero as a sandwich. Chop the veggies extra-small and you have a savory, delicious filling for tacos. Heat a large, deep sauté pan with 1 Tbs. olive oil on medium heat. Add 4 chopped Portobello mushroom caps and let them cook until they get dark and well-done, about 5 minutes. After the mushrooms have shrunken and look dark and juicy, add 1 diced onion and a diced bell pepper to the pan and let cook until onions are slightly browned and the pepper is softened, about 4 minutes. Add 6 minced sun-dried tomatoes and 1 ½ cups chopped artichoke hearts to the pan. Season with 1 tsp. each ground cumin, dried thyme and paprika, ½ tsp. black pepper and kosher salt to taste. Mix well and let cook about 3 minutes. There should be juices in the pan from the mushrooms and vegetables. If the pan is dry, add more oil. Stir in 2 tsp. vegan Worcestershire sauce and 1 Tbs. flour. Stir to mix the flour in and let cook for 1 minute. Spoon the mixture into a taco shell. Add fresh baby spinach. Garnish with fresh chopped parsley and vegan feta cheese.

Philly cheesesteaks were one of my favorite sandwiches before I was vegan and continue to top my list now. Jackfruit is a fruit, but it makes a perfect stand-in for meat. It takes on the flavor of whatever you do with it, keeping only its slightly sweet taste. I cook the jackfruit in lots of savory spices, add caramelized onions and make gravy with vegan Worcestershire sauce and balsamic vinegar. Layer the jackfruit on the tortilla with a spread of vegan mayo and top with vegan cheddar cheese for a decadent taco. Check out my recipe for Jackfruit Philly Cheesesteaks.

An awesome combination of flavors is sauteed potatoes cooked with poblano peppers and spicy vegan chorizo. In a large skillet, heat 1 Tbs. oil and add 4 links of vegan chorizo. Cook until the chorizo is browned and crispy and remove from the pan. Add 4 diced russet potatoes to the pan and cook until they brown and become fork-tender. Add in 1 diced onion and 1 diced Poblano pepper. Stir and cook until the veggies soften. Season with 2 minced garlic cloves, ½ tsp. ground cumin, salt and pepper. Fill a corn or flour tortilla with the mixture and garnish with chopped scallions, vegan cheese and vegan sour cream.

One of my favorite ways to cook cauliflower is to stew it in tomato sauce with spinach. Saute 1 chopped onion and 1 chopped bell pepper in a large saute pan that has a lid over medium heat. Cook until softened, about 5 minutes. Mix in 2 cloves of minced garlic and cook about 1 minute. Add chopped cauliflower florets and let cook until they start to brown, about 10 minutes. Add 1 tsp. each of ground turmeric, dried thyme and dried oregano and ¼ tsp. red pepper flakes and mix well. Stir in 1 ½ cups diced tomatoes. Cover the pan and let cook until the cauliflower has softened, about 20-30 minutes. You want the cauliflower to be tender but still have some bite. If the pan gets dry, add water in small increments. When the cauliflower is about ready, add in 12 oz. of baby spinach and a pinch of nutmeg and heat through. Heat up flour tortillas and fill with the cauliflower mixture. Top with vegan sour cream, if desired.

Lentils are a perfect stand-in for meat. Add Mexican spices and you have my Sloppy Joses. In a large saucepan with a lid, heat the oil over medium-high heat. Add 2 cups mashed cooked lentils and saute until browned and starting to crisp. Add 1 diced onion, 1 diced bell pepper, 3 minced garlic cloves, 3 chopped scallions, 1 minced jalapeno and 10 sliced green olives to the pan. Add 2 Tbs.  tomato paste and toss to coat everything in it. Let the paste cook for a minute or two until it is fragrant. Mix in 2 Tbs. vegan Worcestershire sauce, 1 tsp. each ground cumin, ground coriander, paprika, chile powder and kosher salt, and ½ tsp. black pepper. Cook the mixture for a few minutes, stirring often. Add 1 ½ cups diced tomato along with a half-cup of water. Stir the mixture. You want it to be saucy but not too loose. Cover the pan and let cook for at least 10 minutes so the flavors marry and intensify. Mix in 2 Tbs. fresh chopped cilantro and taste for any seasoning adjustments. Ladle the Sloppy Jose mixture onto flour tortillas and top with vegan cheddar cheese, vegan sour cream, avocado slices or whatever garnishes you like. Squeeze some fresh lime juice on top.

I love the taste of roasted veggies. Their flavors get so intense, their natural sugars develop and they taste rich and decadent. Cut onions, bell peppers, mushrooms and zucchini into similar size shapes. Toss them with a bit of olive oil and then season them with salt, pepper and for me, always garlic. Roast them in a 425 degree oven for about 15-20 minutes until they are tender and browned. Roll the roasted veggies in a tortilla with some vegan pepper jack cheese and a spoonful of quinoa. Add some fresh diced tomato and fresh basil leaves for added flavor. 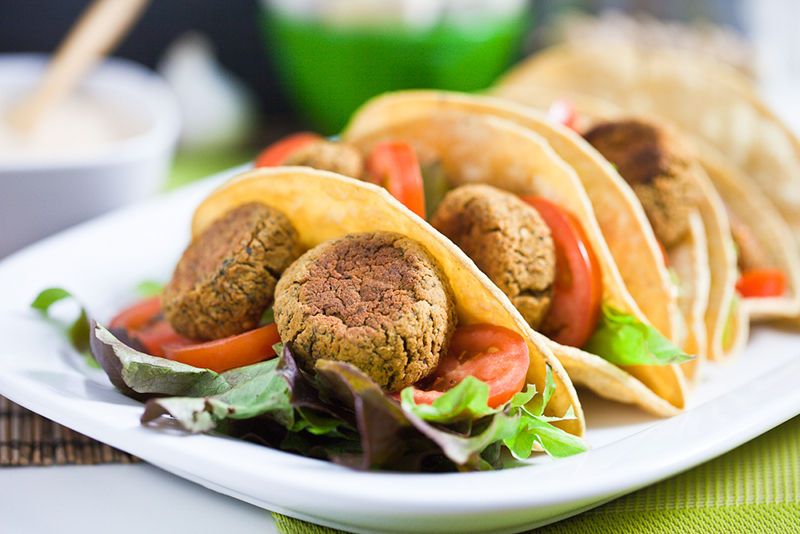 When it comes to amazing taco fillings, the possibilities are endless. What are your favorite taco fillings? Give us some ideas in the comments section.