People Are Stealing the Blood of Horseshoe Crabs to Do WHAT?! 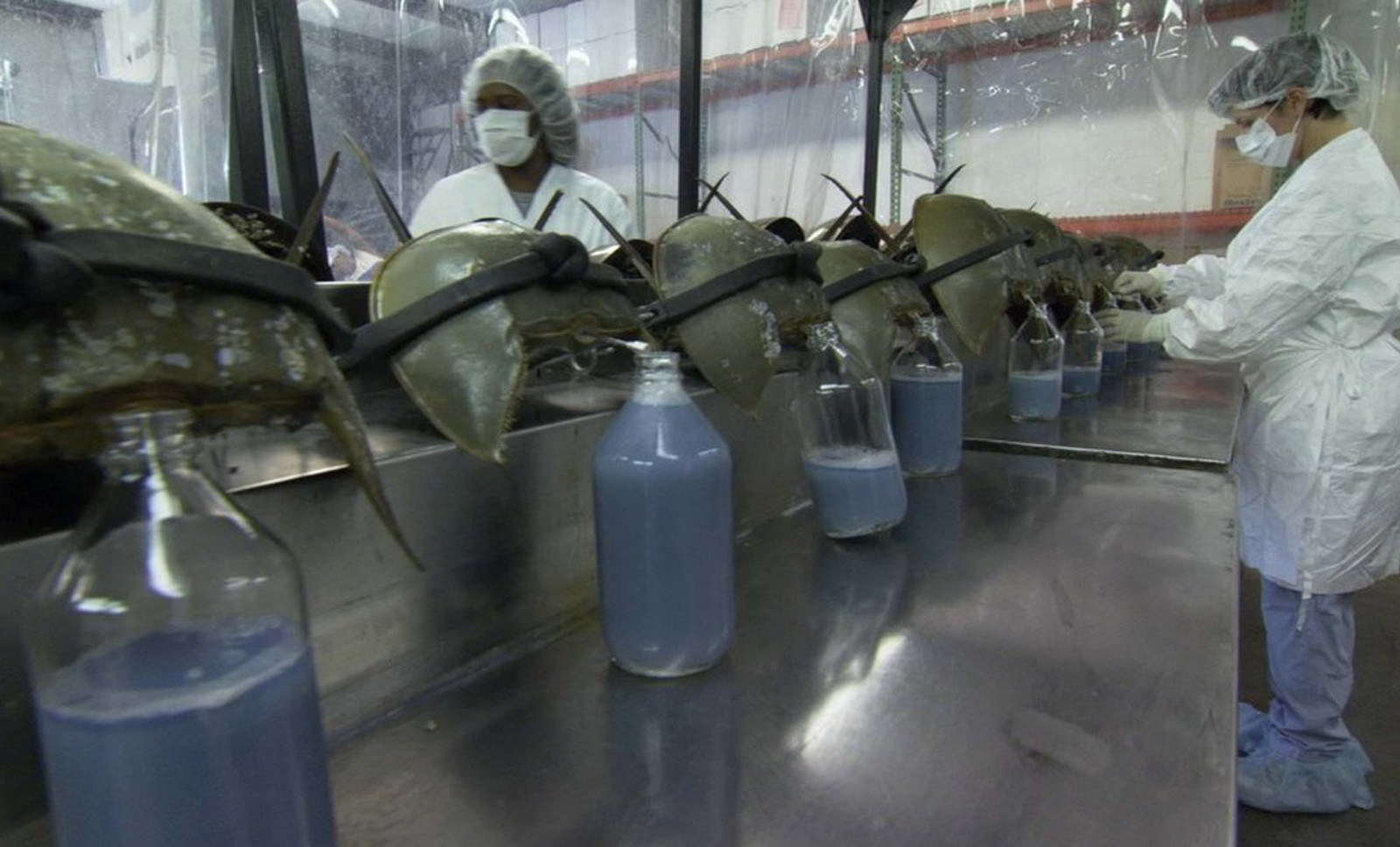 Throughout history, researchers have found many wacky ways of exploiting animals for the “benefit of science” from dropping toxic chemicals onto the shaved skin of rabbits for cosmetics testing to sending chimpanzees and dogs to outer space.

Many examples of animal manipulation might seem rather unnecessary and quite frankly, ridiculous. Buy hey, it’s in the name of science! Right? In regards to the use of animals for cosmetics – sure! Hot new brands of lipstick and eye liner are totally worth sacrificing millions of non-human lives every year (…or are they). In 2011, researchers at Albany Medical College decided to spice up music preferences in mice by giving them cocaine (we’re sure that will save lives some day!). And sending very confused animals out to space to make sure space life is safe makes total sense (see where we’re going with this…). But have you heard the news about harvesting horseshoe crab blood…for human medicine?!?

What’s This All About?!

Thousands of horseshoe crabs (~500,000) are collected by medical industries every year to have their blood drained while the animals are still fully conscious and alive. Whoa, how creepy is that? And yet we thought these marine arthropods with fierce-looking shells would be more likely to be featured in a fictional horror flick than a real one.

So, why did medical facilities believe acting as horseshoe crab vampires would be a good idea? The blood of these arthropods (horseshoe crabs) does not contain hemoglobin –the stuff responsible for transporting oxygen within red blood cells of vertebrates like us humans. Instead, horseshoe crabs use copper-containing hemocyanin for oxygen transport and thus, their unique blood has a beautiful blue color. But wait, there’s more… medical industries aren’t only interested in the aesthetics of these creatures’ vital fluids.

In the 1960’s, John Hopkins University researcher Dr. Frederik Bang observed that massive clotting occurred when common marine bacteria were injected into the bloodstream of the North American horseshoe crab. Because of the specie’s impressive evolutionary history and relatively subtle changes in appearance and physiology, horseshoe crabs have a compound in their blood called Limulus Amebocyte Lysate (LAL) to rapidly attack infections in lieu of an immune system. LAL clots around the “bad germs” such as bacterial endotoxins, viruses, and fungi. In other words, the blood turns into a jelly-like substance. Due to this discovery, LAL was used to medical advantage, since it could act as an international standard screening test for bacterial contamination and toxins in biomedical applications.

U.S. Food and Drug Administration certified drugs are required to be tested for human safety using a horseshoe crab’s milky blue blood. Next time your doctor recommends a flu shot, will you remember to thank a horseshoe crab?

Using horseshoe crab LAL has protected humans from being exposed to lethal gram-negative bacteria. A quart of the blue blood is valued at approximately $10,000 to $15,000! Clearly, harvesting horseshoe crabs for medicine has become a lucrative global industry. Fortunately for us humans, but sadly for our arthropod friends, researchers have also found evidence that other substances in horseshoe crabs may have antibiotic, antiviral, and anti-cancer characteristics.

Unlike human blood bank systems, horseshoe crabs don’t willingly “donate” 30 percent of their body’s precious fluids. Although the animals are released back to their wild habitat after blood is extracted through injecting needles into their hearts, we wouldn’t involuntarily give up our blood to save other species, so why would they? It takes an estimated 30 days for a horseshoe crab to recover her/his blood after release.

Horseshoe crabs have been in existence for over 450 million years and have even survived through three of Earth’s major mass extinctions. This puts dinosaurs to shame! Horseshoe crabs might be one of the world’s most historically successful animals – but will this species survive one of the planet’s current greatest threats: humans?

Since harvesting more horseshoe crabs leads to greater profits, you can imagine how medical and pharmaceutical industries might get a bit greedy. While in the past, collecting and releasing horseshoe crabs was considered safe and sustainable, this may no longer be the case. Along with burdensome pressures such as climate change, habitat destruction, and overfishing, demand for horseshoe crab blood is causing concerning decline in their populations.

Recent research has revealed evidence of significant changes in horseshoe crab behavior and psychology after being bled. Since 20 to 30 percent do not survive the blood extractions, was it really a surprise that those who do live through the process might suffer from negative effects? Current methods of capturing horseshoe crabs are to conveniently collect them when they beach themselves to breed. Since they can no longer breed without fearing vampires (humans), their reproduction success might be affected. Roughly handling aquatic beings out of the water is also very stressful and could increase mortality rates. 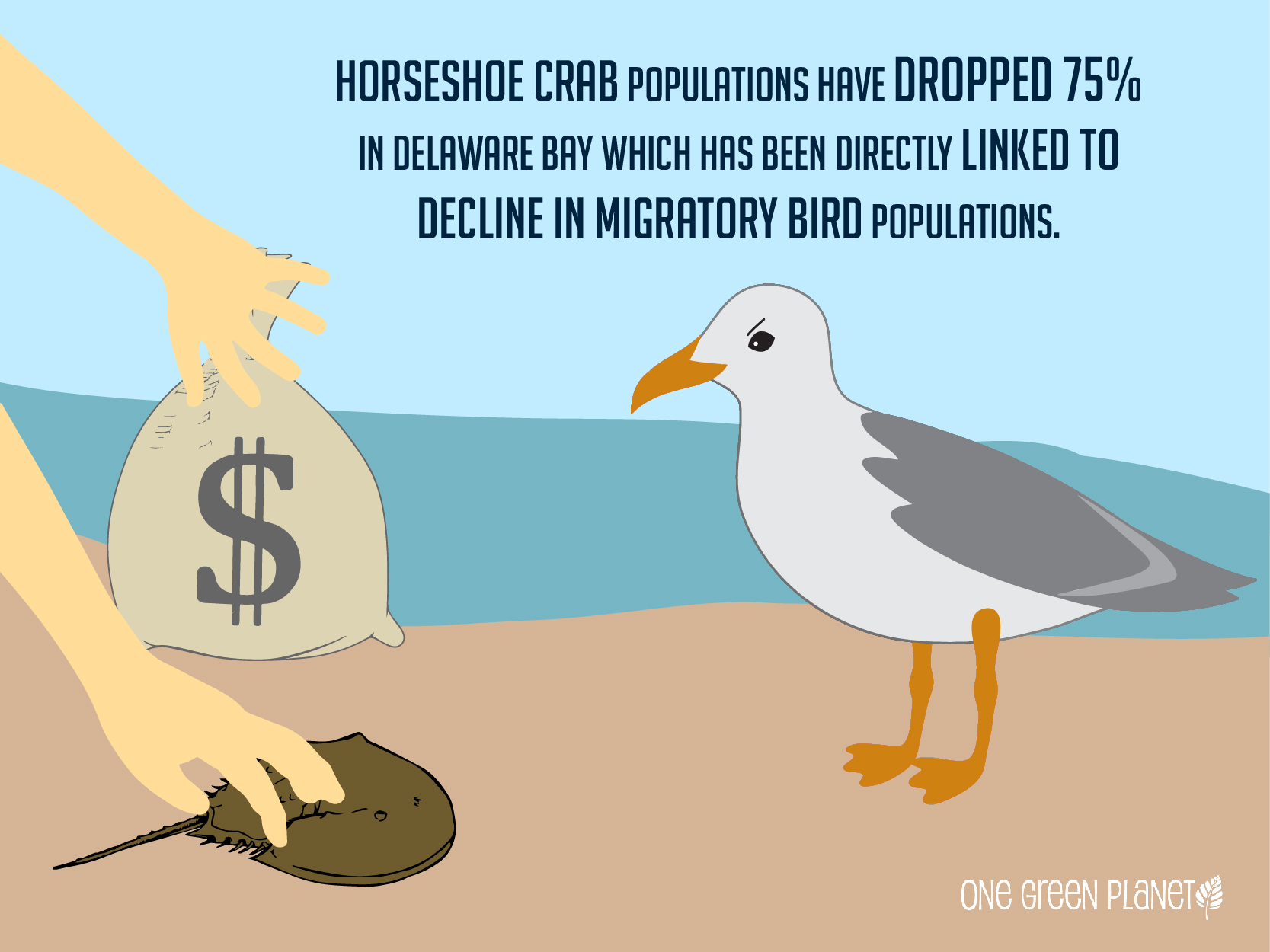 Horseshoe crabs are considered critical to human health protection and to the biomedical industry. Without use of their blood, medical personnel would not be able to test for gram-negative bacteria, responsible for spinal meningitis, typhoid, Legionnaires disease, and other nasty life-threatening diseases. Unfortunately, no effective synthetic alternative to horseshoe crab LAL has been put into practice.

Though humans are benefiting from use of these organisms, ecosystems are not and the horseshoe crabs certainly don’t appreciate being used. Thus, the issue is a major ethical controversy. Plus, if horseshoe crabs become endangered, we risk returning to the medical dark ages of unsterilized drugs anyway. Fortunately, legislators have begun putting limits on how many horseshoe crabs can be harvested or fished.

There is more good news. Many research facilities are working toward finding a viable substitute to the blue blood. For example, researchers at the Department of Chemical and Biological Engineering believe they may have discovered a substance that reacts similarly to endotoxins as LAL.

Research continues to be underway for a realistic solution to save the horseshoe crabs, but for now, it’s a bloody complicated dilemma! Let’s do what we can to help their survival by learning about/sharing news on consequences of overfishing,  finding out how you can help protect oceans, researching new ways to prevent climate change, and investigating how eating our oceans affects all species, including horseshoe crabs (who are often used as fish bait).

Let us know what you think of this gory topic, Green Monsters, and post your solutionary ideas in the comments section below!