According to Sarah Palin’s Logic, These Animals Need to ‘Take One for the Team’ and Die Already 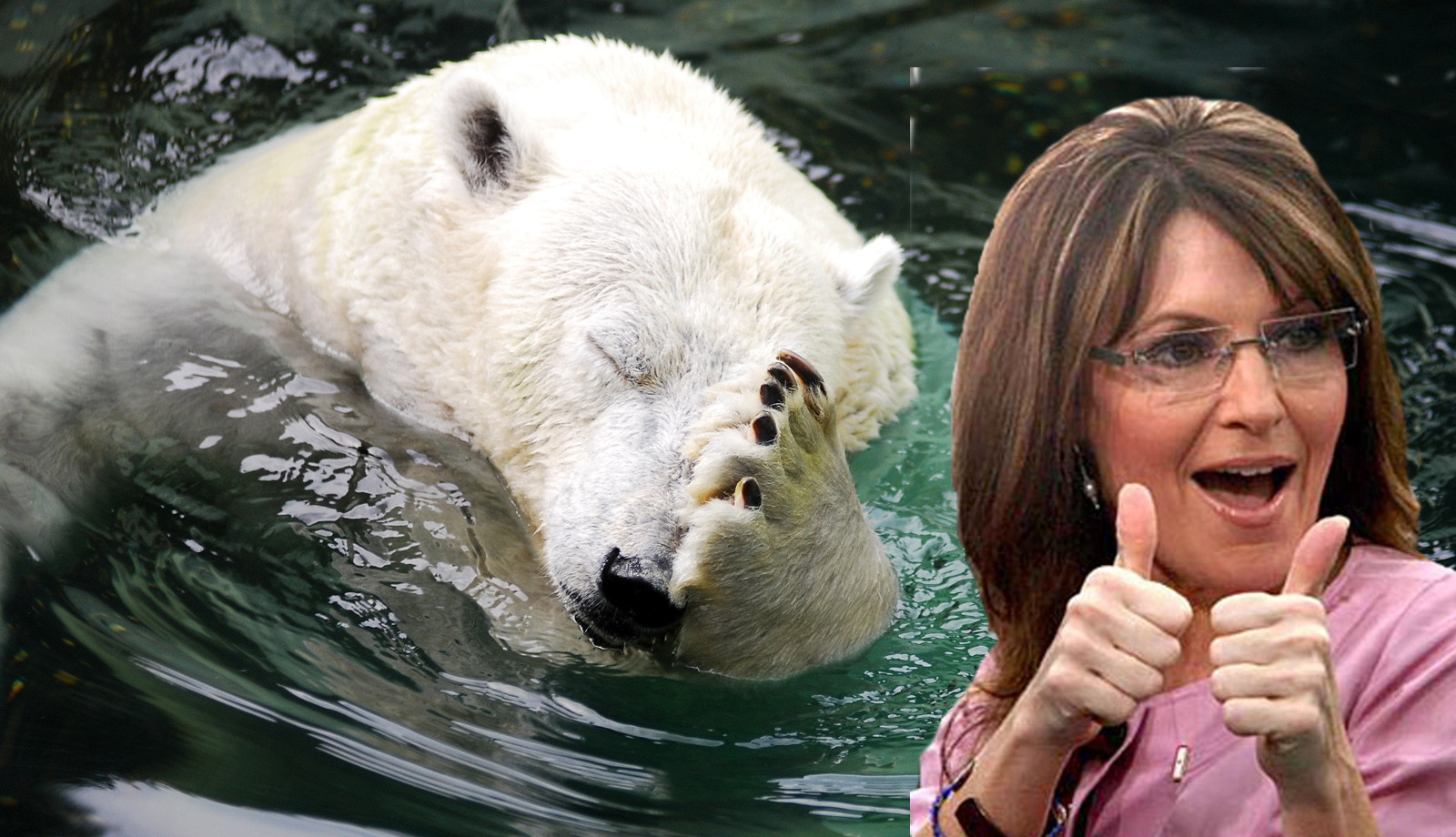 Though Former Alaska Gov. Sarah Palin is known for her anti-witticisms and politically-unsound commentary, she said something particularly eye-roll worthy during a recent speech at the North American Prospect Expo in Texas.

According to Forbes, Palin said that President Barack Obama isn’t for American energy independence because he refused to expand oil drilling in the Alaska National Wildlife Refuge (ANWR). She said concerns from both environmental and animal activists about drilling having negative impacts on caribou and moose populations are overblown. Trigger Warning: These comments may induce facepalming. Side effects of reading them also include needing to lie one’s head down on the desk for a few moments. Proceed with caution.

“The animals mate under the pipeline,” the former Republican vice presidential candidate said, clarifying, “I haven’t actually seen it.”

Oh, just to clarify, she hasn’t seen it. ‘Cause Sarah Palin is also an Alaska wilderness explorer.

Sorry, but it only gets worse:

“[I]f it is to hurt one caribou, then that one caribou should take one for the team and allow the rest of the country to benefit,” Palin ACTUALLY said.

Hey, we want to make more money, so take one for the team by DYING.

Unfortunately, Palin is just wrong. Animals don’t get all hot and bothered by oil drilling or pipelines. There are a few reasons 34 of 43 major caribou populations are in decline: Rapidly rising Arctic temperatures are throwing caribou out of sync with the environment in which they evolved, and oil and gas development, mining, logging, and hydropower projects in the Far North are impinging on the caribou’s range.

But, y’know, maybe the caribou will understand. Oil and cars are, like, really important. Actually, maybe it would be better for them to die off, so we wouldn’t have to worry about destroying healthy forests, or improving bad ones. We say this because caribou populations are a major indicator of forest health. And a recent census showed that Alaska’s caribou population is in decline anyway. Caribou and moose, which are also in decline, would totally understand. They watched the show: they are the weakest link.

And the other species that our industries have hurt are cool with it too. Don’t worry, Sarah. These five animals, and the more than 30 currently on the endangered list just for mammals, understand that desks, and new apartments, and fancy boats off the coast of Florida — these are totally worth their lives. They’re ready to take one, or hey, millions, for the team.

For the girl who loved to kiss frogs when she was little, because she desperately hoped at least one would turn into a prince, the Mississippi gopher frog is a real charmer. And, no, just to clarify we definitely didn’t do that.

But really, isn’t he majestic? 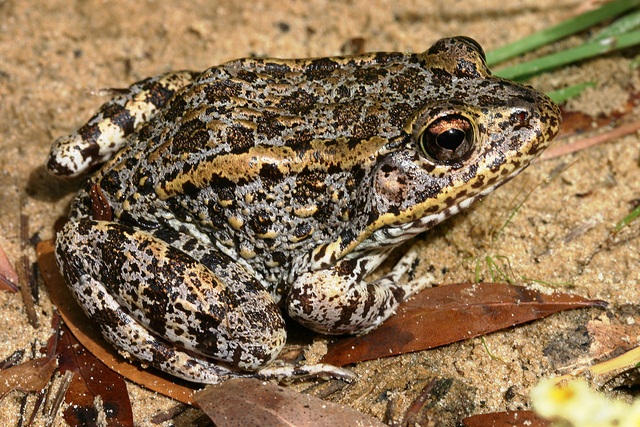 Well, according to the U.S. Fish and Wildlife Service, the Mississippi gopher frog used to live in nine counties in Louisiana’s lower coastal plain, east of the Mississippi, to the Mobile River delta in Alabama. Imagine the strange and soothing sounds they make. So beautiful that you just want to kiss them!

Anyways, the frogs haven’t been seen in Louisiana since 1967 or Alabama since 1922, but that’s just because they’re way too cool for people. They don’t like those hip, new residential communities. Too much racket. That’s why residential development over time forced the entire Gopher frog population into one area. Yeah, that’s right, they only breed in one pond in Harrison County, Mississippi. Talk about a lack of privacy.

The ’70s and free love — that was all cool, but it’s not the ’70s anymore! Especially not for frogs.

And now a new residential development and some highways and important stuff like that are planned on the frog’s last pond. But hey, it’s totally cool, ’cause people need, like, apartments too, right? So, the frogs understand. The population of Mississippi is 2.9 million, so people obviously need more space than the 100 Gopher frogs that are left. Don’t worry about them. They’re totally ready for their species to croak for us.

According to the Center for Biological Diversity, the bowhead whale lives in the coldest and remotest reaches of the ocean. So, we already know they aren’t people-whales. They’re so badass that their only known predators are us and killer whales. The killer whales are the badass part. We cheated with high-powered rifles and all that testosterone-filled jazz.

You, whale, think you can defeat me, man!? *Beats on chest*

But, dude, it’s all good now, because the whales’ population is up to like 10,000 since the commercial whaling ban. So bring on the oil drilling! Obviously, if the whales really were THAT badass, they could survive some drilling-into-the-crust-of-the-earth noise, and some occasional oil spills, and collisions with freight ships. That’s just the meaning of Darwinism, right? The whales understand. I mean, if oil drilling doesn’t kill them off, rising sea temperatures from our dependence on oil will, right? Might as well say goodbye to the majestic creatures now.

3. The Delta Smelt Are Crazy About Vegetables Grown With Pesticides

The delta smelt are small fish who live in the San Francisco Bay Delta, and their populations are experiencing a catastrophic smeltdown. The smelt are mad cool, too. They are mind readers, but for the water in the delta — they can tell how it’s feeling and whether it’s clean. But they just get so emotional. They’re too empathetic, like women and vegans, amirite? (I’m not.)

They just … they just want to hug all of the water ecosystem! Is that too much to ask?

So, it’s no surprise the smelt started crying their eyes out and dying off from the crazy amount of pesticides and herbicides discharged into waters from California’s Central Valley.

In 2006, extinction analysis said the delta smelt population could die out within 20 years, unless the Environmental Protection Agency enforces stricter regulations on the 46 toxic pesticides in and upstream of endangered species habitats, including the home of delta smelt. But the delta smelt are chill. They understand that pesticide- and herbicide-ridden veggies are more important than silly, overly sensitive fish. They understand that Nemo was destined for Darla, because humans’ birthdays are SO important.

Darla from ‘Finding Nemo’: “I’m a piranha. I live in the Amazon!” *Almost bites off dentist’s finger.*

4. The Alexander Archipelago Wolf Goes Insane for Anything Wooden

These super cool wolves own the islands of the Alexander Archipelago. Well, they don’t own them, people do. But they practically run the Tongass National Forest, which is the largest national forest in North America! Wait, I mean, they get to run through them, as long as they stay away from the areas where the U.S. Forest Service is planning big timber sales.

Wolf mom: “Time to get up! The truck is coming and we will be killed or shot if we don’t get a move on. People need their chairs!”

So, they have it pretty great. They just have to get up early on the days the loggers and those scary machines are coming in, but it’s really not that big of a deal. I mean, I guess the Forest Service is slowly encroaching upon more and more of their habitat in the Tongass forest, which is 80 percent of their total habitat, but that’s totally fine. The ENDANGERED wolves understand that you need their homes for really important things like paper. Oh, and desks! Desks totally > wolves’ lives.

5. The Florida Manatee is On a Boat — Take a Look at Him

Take a picture, trick! I’m on a boat!

Bro on a boat: “Dude, did we just hit an animal? Nah, I must just be really drunk.”

The Florida manatee literally cannot stop singing about boats, because he loves them so much and definitely doesn’t mind that 87 of his friends are killed by them every year. They’re so damn cool, and the shoes associated with them make you look so cool that he understands why he doesn’t have a protected habitat. Even though that 87 number is seven times the number of manatees that the Fish and Wildlife Service estimates can be killed without impairing the species recovery, it’s all good ’cause the motors are music to their ears. Oh, and climate change creating cold snaps in the water and killing more manatees — that doesn’t bother them either. It’s actually nice for them to have some versatility in temperatures. What doesn’t kill you makes you stronger…? But, FYI, they’ll get you back.

All is fair in love and eco-war, right?

Really, don’t protect their habitats. Seeing people party on boats and kill their food supplies by dumping things off of them is totally understandable to the manatees. #PartyinParytinYeah #Blessed