Orcas (sometimes referred to as killer whales) are one of the most incredible species on our planet. These animals, who are renowned for their great intelligence and sensitivity. They naturally live in closely bonded matriarchal pods and stay with their immediate family members all their lives. They are one of the most widely ranging mammals on the planet, traveling up to 100 miles a day. The typical life expectancy of a wild orca is thirty years for males, and fifty years for females … though they can be significantly older than that. “Granny,” the matriarch of J-Pod, was believed to be 103 years of age after being spotted off the coast of Canada in 2014!

The brain of an orca is over four times larger than that of a human, while the brain lobes that deal with the processing of complex emotions are also a great deal more sizeable. Orcas have been evolving for millions of years, while modern-day humans only emerged about 200,000 years ago. When you take that into account, doesn’t it seem absurd that we could ever imagine that we have the right to imprison these animals in small tanks and force them to perform tricks for our entertainment?

Sadly, this is exactly what we have done to one of the most complex, cognitively sophisticated creatures on this planet. An entire industry has been built around the enforced confinement of orcas and other marine animals … all for the sake of human amusement. Marine parks such as SeaWorld and Miami Seaquarium in the U.S., as well as Loro Parque in Spain (to name a few), have come under fire in recent years for their treatment of captive orcas. This outrage has largely been fuelled by the 2013 documentary “Blackfish,” which explored the death of SeaWorld Orlando trainer Dawn Brancheau at the hands of an orca named Tilikum. With audience numbers and profit margins rapidly dropping, there are signs that the orca captivity model could be falling apart at the seams, but the industry is by no means giving up without a fight just yet. 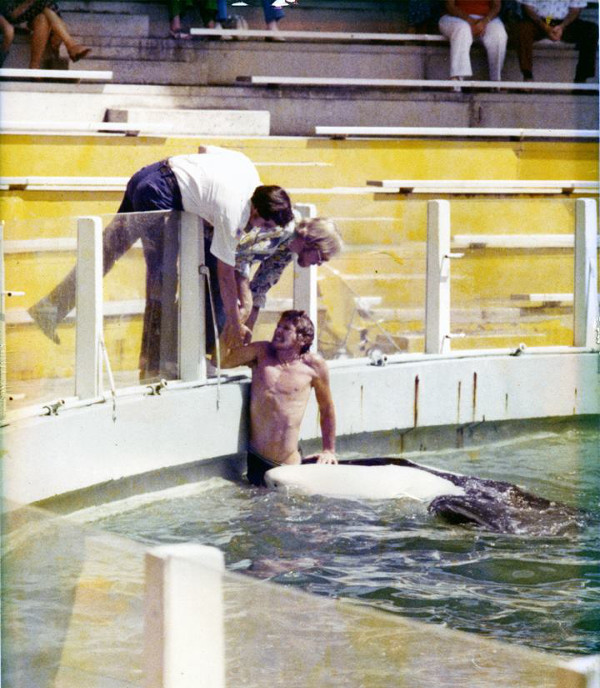 The image shows a man who had become trapped in Hugo’s pool being helped out by a couple of trainers, including Scott Amsel (the man on the right). Simka said, “Scott (and his wife Kathy, who was a dolphin trainer) left Miami Seaquarium shortly after this incident, realizing quickly that the relationships between these captives and their human oppressors is not all happiness and roses.” Sadly, Hugo had become so traumatized by his time in captivity that he was attempting to pull the man to the bottom of the pool … just as the famed SeaWorld orca Tilikum did to his trainer Dawn Brancheau many years later, on Feb. 24, 2010.

Simka explained, “This is the true nature of my childhood friend, Hugo the killer whale. What I did not know about Hugo, at the time, was that he was at one point a wild animal (a gentle southern resident), captured, taken from the Salish sea and coincidentally, turned psychotic.”

Mental health issues are rife among captive orca populations, as are unusual bacterial and fungal infections, unpredictable bouts of aggression, dental problems, collapsed dorsal fins (in males), and a significantly shorter life expectancy than they could expect to have in the wild.

Sadly, Hugo’s story came to a tragic end in 1980, when he committed suicide by ramming his head repeatedly into the wall of his tank. Since then, his old tank mate Lolita has been held in solitary confinement in the smallest orca tank in North America. Astoundingly, however, she still remembers the calls and vocalizations that were made by her family, referred to as L25 subpod by whale watchers. Animal rights activists have long argued that Lolita should be permitted to return to the ocean and reunite with her family members, and have even prepared a detailed retirement plan that would enable her to become re-acquainted with life in the wild. However, Miami Seaquarium is unwilling to consider releasing its “star performer.”

The tide has been turning against the orca captivity business for quite some time now, but it is vital that this momentum is maintained until all the tanks have been emptied at last, and we can rest assured that no other orca will ever have to suffer a fate as tragic as Hugo’s. To learn more about the truth behind orca captivity – and why you should never buy a ticket to a facility that presents these animals as a form of entertainment – read the articles below.