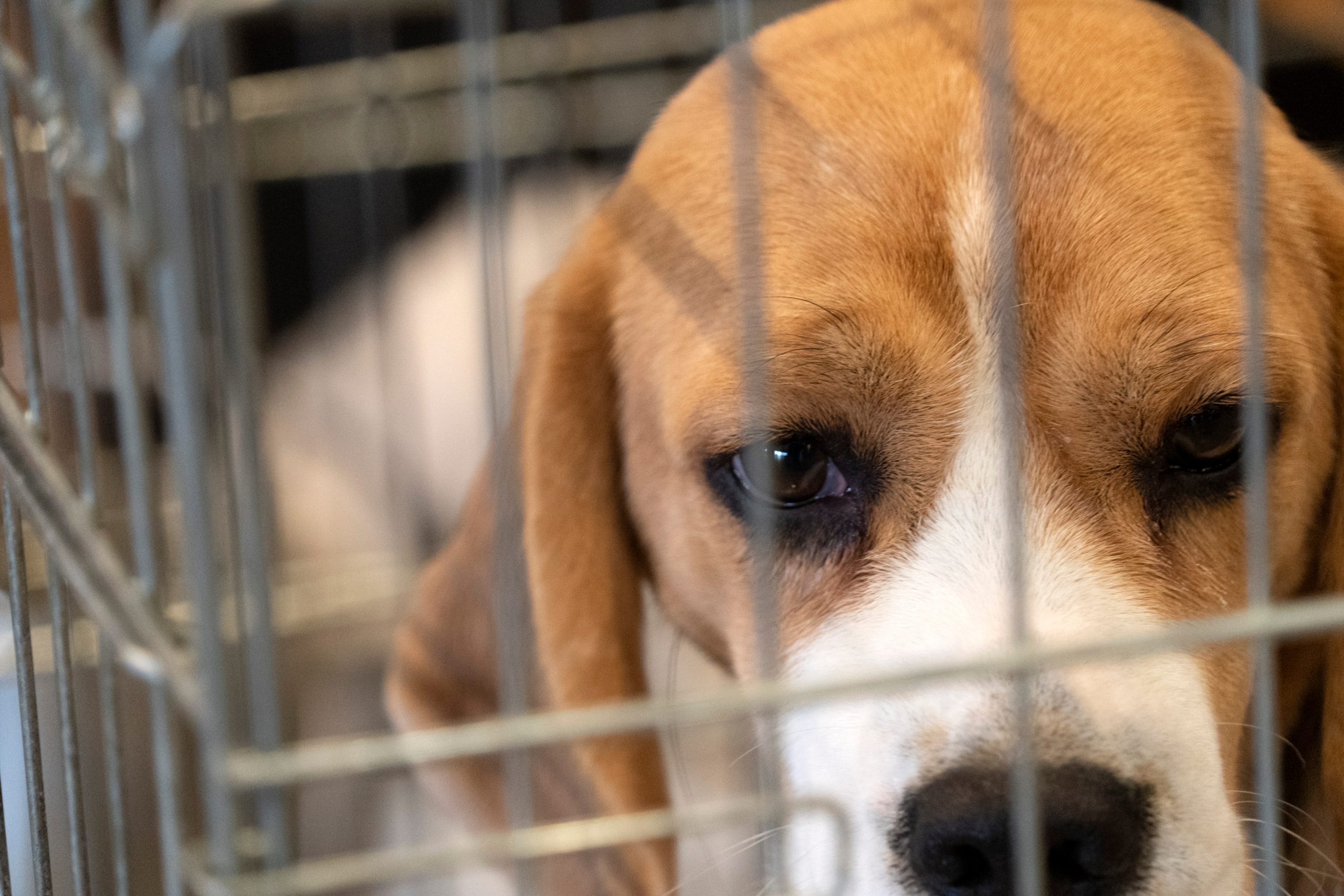 Puppies as young as one week old were poisoned with drug overdoses and some had their mouths taped shut to prevent them from expelling them. It may sound like a backyard animal cruelty case, but it’s what the U.S. Food and Drug Administration is forcing pharmaceutical companies to do to dogs in order to get approval for new drugs. It has to end.

Our new report “Broken Bureaucracy” chronicles how the FDA makes companies conduct expensive, misleading, and wasteful tests on as many as 20,000 dogs annually—potentially a third of all dogs experimented on in the U.S.—as part of the drug approval process stuck in the 1930s. Our first-of-its-kind analysis reviewed nearly 200 recent drug applications to document in companies’ own words what they did to dogs to get FDA approval.

The documents detail how puppies were forced to inhale experimental drugs by having masks strapped to their faces, or made to ingest drugs by having tubes forced down their throats. Many dogs suffered adverse effects like foaming at the mouth, becoming comatose or paralyzed, blindness, convulsions, “beagle pain syndrome,” and more. They “vocalize” and “struggle” during dosings, because they’re in so much pain. They’re all killed at the end, but some die unexpectedly early because of trauma during force-feedings, and for other reasons.

We found that 99 percent of the studies that listed the dogs’ breeds used beagles. A federal government website explains that “beagles have become the breed of choice, due to their useful size and docile temperament.” That means they’re easy to cage and easy to abuse.

As Dr. Lawrence Hansen, MD—a Professor of Pathology and Neurosciences at the University of California-San Diego and one of the world’s top Alzheimer’s disease researchers—stated following the report’s release, “According to the government, every drug that fails in human trials after passing animal tests represents 14 years and $2 billion wasted.  Yet, the FDA continues to force drugmakers to invest time and money in cruel and outdated dog testing that’s doomed to fail. Experiments on dogs are a massive waste of resources, especially when companies would rather use superior research technologies like human organs-on-chips to model diseases and test drugs.”

Dr. Hansen continued, “From a scientific perspective, the problem is that dogs are not simplified versions of humans. This is why the NIH reports that 95 percent of drugs that pass animal tests—almost always including beagles—fail in humans because they don’t work or are dangerous. This vast disconnect between scientific evidence and archaic FDA drug testing regulations reliably wastes billions of dollars every year, sets back medical progress, and prolongs the suffering of those desperate for relief.”

Companies Punished For Trying to Do the Right Thing

These government-mandated dog tests are stunningly expensive (up to $900,000 each), unreliable (they fail over 90 percent of the time), and shareholders don’t like them (even according to the Government Accountability Office), while more efficient, effective, and dog-friendly test methods exist. Studies show that modern technologies like organs-on-chips are more accurate and modeling human diseases and testing drugs than crudely poisoning puppies and other animals.

And it’s not just that the FDA often won’t allow drugmakers to use more accurate 21st-century testing methods. The government actually punishes those who challenge its outdated and counterproductive regulations.

One publicly-traded company, Vanda Pharmaceuticals, lost tens of millions of dollars on Wall Street for its brave and scientifically sound decision to challenge the FDA over its dog testing demands. The impasse with FDA also halted human trials of a promising drug that’s shown to be effective for treating COVID symptoms.

“The animal studies the FDA demands…have been considered routine in the pharmaceutical industry for decades, despite the growing body of evidence discrediting such studies’ scientific value,” said Vanda’s CEO Mihael Polymeropolous, MD,  in an open letter to the FDA. “For this reason, drug companies typically conduct the studies reflexively, without challenging the FDA. The FDA has relied on industry complacency for too long.”

Fortunately, bipartisan help from Capitol Hill is on the way. In March, U.S. Congressmembers Brendan Boyle (D-PA), Rep. Madeleine Dean (D-PA), and Brian Fitzpatrick (R-PA) introduced the bipartisan Alternatives to Animals for Regulatory Fairness Act— H.R. 1905, known as the AARF Act. This WCW-backed bill would update woefully outdated federal law to explicitly allow drug makers to use high-tech alternatives to painful and deadly testing on puppies and other animals to demonstrate the safety and effectiveness of new drugs.

As Rep. Boyle told reporters, “Science has come a long way and there are now better ways to assess the safety of drugs than conducting deadly experiments on puppies that are detailed in White Coat Waste Project’s troubling new report….Especially when animal tests often poorly predict human outcomes, there is no reason we need to require them.”

Join the chorus of scientists, lawmakers, companies, and advocates working together to cut the FDA’s deadly dog testing red tape. Urge your lawmakers to cosponsor the AARF Act today.