Clarabelle the Former Dairy Cow Finally Gets to Keep One of Her Babies! (PHOTOS) 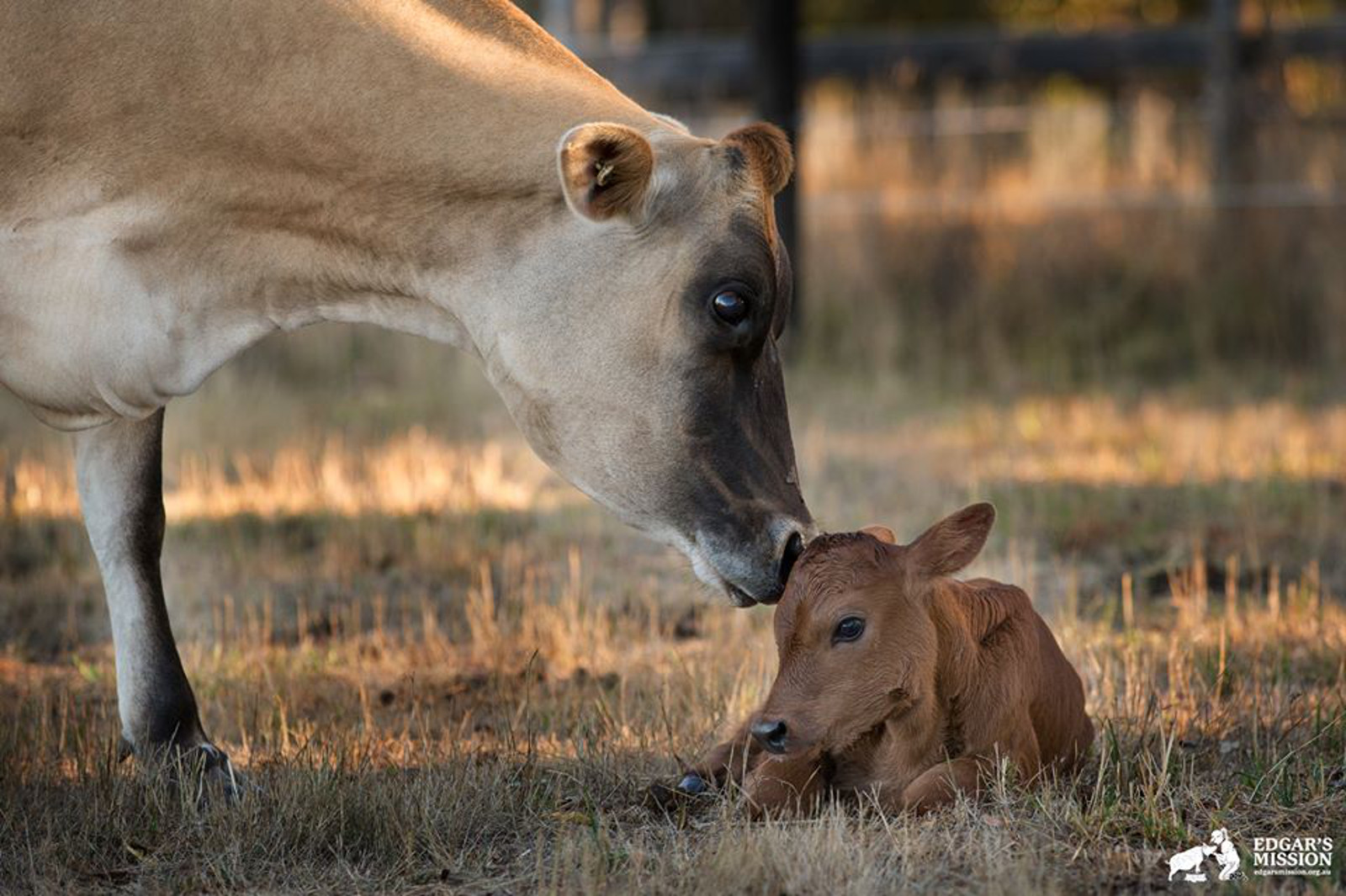 Edgar’s Mission Farm Animal Sanctuary  has rescued over 300 animals. In addition to providing a loving and respectful home for these animals to happily live out their days, they provide the public with the opportunity to meet and interact with farm animals. By showing visitors that the animals they might typically think of as “food” are actually dynamic, social and emotional beings, Edgar’s hopes to change the public perception of farm animals for the better.

The stories and photos they share of the animals who reside at their sanctuary are undoubtedly adorable, but they serve a much larger purpose in conveying a message of kindness. Operating under the slogan, “If we could live happy and healthy without harming others … why wouldn’t we?” Edgar’s is on a mission to make us all fall in love to the world’s most abused animals.

One of these lucky residents is Clarabelle, a rescued cow who is a former victim of the dairy industry. Since coming to Edgar’s Mission, Clarabelle’s life has completely changed for the better. This is her story.

Milk Life is No Life At All

Similar to the U.S., Australian residents consume about 23 gallons of milk and 28 pounds of cheese each year. While many people think that the dairy industry is somehow less cruel than the meat industry, because the cows don’t have to die to produce milk, this is hardly the case. 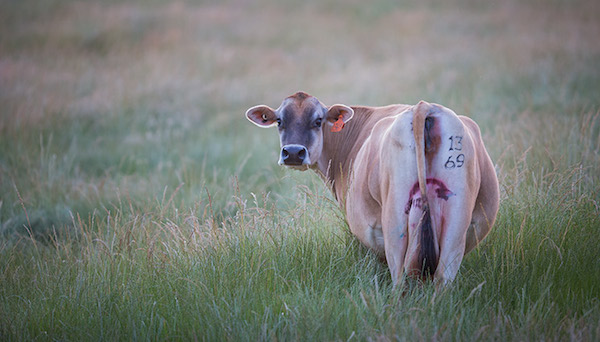 Like all mammals, cows only produce milk to feed their young. To keep dairy cows producing the milk, they are forcibly impregnanted multiple times during their lives. With the arrival of each calf, the cow will begin to lactate, providing the milk desperately sought by the dairy industry. This milk would be “wasted” fulfilling its actual purpose of feeding the calf, so these babies are immediately taken from their mothers. Males are put into small, restrictive crates and sold for veal, and females are funneled into the meat industry or destined to become dairy calves like their mothers.

Without being given ample time to mourn the loss of their precious babies, mother cows are hooked up to milking machines where they will be expected to give around 10 times more milk that they would naturally. The drain that constant milking puts on a cow’s metabolism also makes them prone to painful teat and udder infections.

This is nothing like the “happy cow” myth the dairy industry would have us believe.

As a dairy cow, Clarabelle had numerous calves stolen from her, she also suffered through tail docking and branding. However, once she set foot at Edgar’s Mission, everything changed. Clarabelle was pregnant at the time of her rescue and little did she know, this time, she would actually be able to keep her baby.

“Little did she know,” is the key phrase here. There was no way to communicate to Clarabelle that this go around would be different, and about a week before her calf was expected to arrive, the staff at Edgar’s mission sensed something was off.

Clarabelle, normally first in line for food, was hanging back, nervously glancing over her shoulder. Her swollen udders gave her away. She had given birth, but was hiding her beloved calf to protect it from the men who had come to take her other calves away. 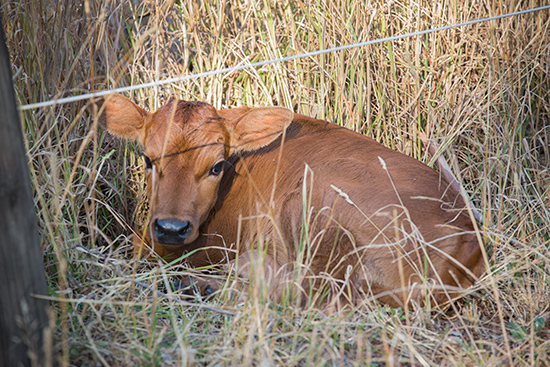 The staff went out to find the calf and it didn’t take them long to see the little brown creature hidden in a tiny patch of woods at the far end of the sanctuary. Clarabelle had given birth and cleaned her baby girl. She was determined to keep this calf a secret to protect her from the fate she was sure would come. Cows have great memories, and the pain of losing calf after calf was enough to force Clarabelle into action. 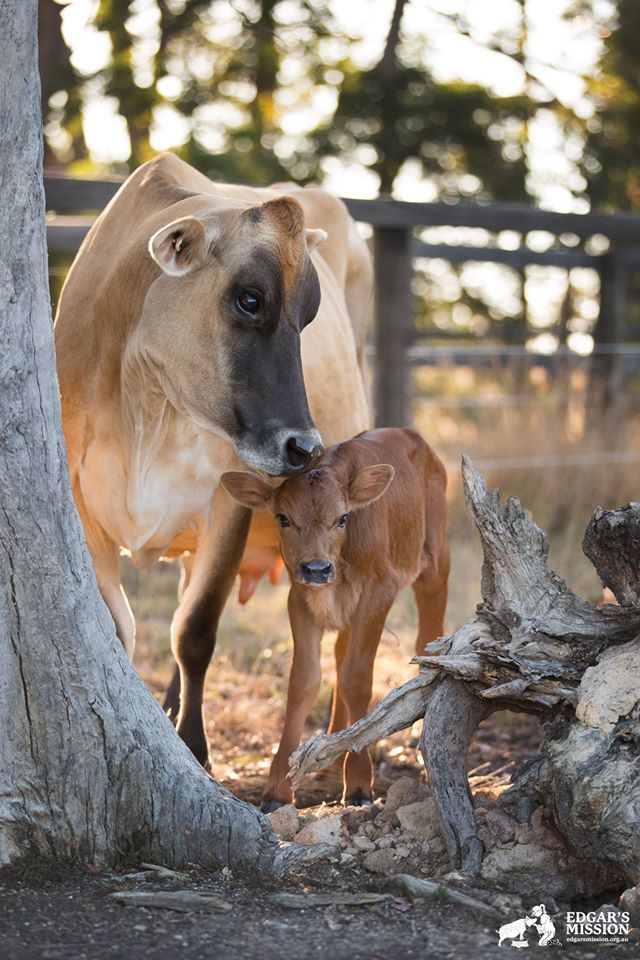 Discovered on Valentine’s Day, the little calf was aptly named Valentine and was born into a life where she would live happily with her mom. They would be able to graze together and Valentine would be well cared for just as this little family would have done all along if it weren’t for the cruelty of factory farming. 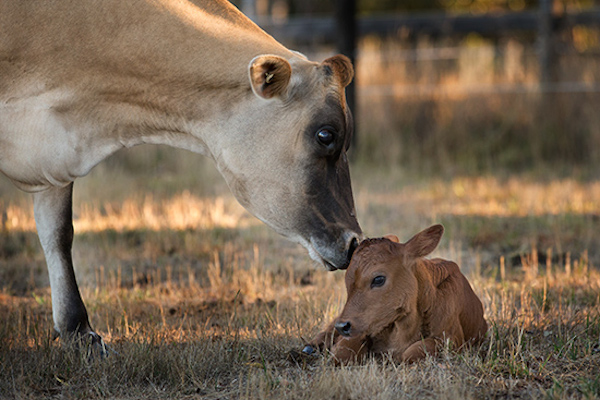 Thanks to Edgar’s Mission, Clarabelle and her adorable calf will be able to live their lives happily, teaching the public about the cruelty of the dairy industry. There are millions of other cows currently suffering in the dairy industry to provide us with milk and cheese, two product that we don’t even need!

Please, consider Edgar’s Mission motto and consider picking a dairy alternative. We can all lead happy, healthy lives without causing harm to others, so let’s get started! 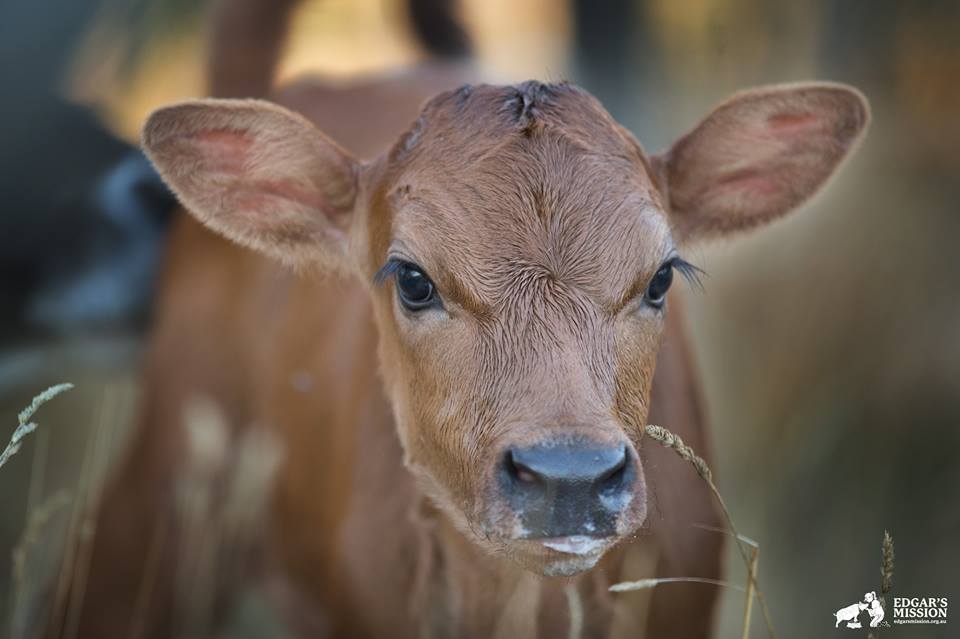 If you would like to learn more about this mother-daughter duo or Edgar’s Mission, you can visit their website here.