Raw desserts are something we all can enjoy — especially when those desserts are made with all the flavors of fall. Pumpkin, maple, warm spices, caramel, apples … mmm! First thing is first, though. Canned pumpkin purée is the gold standard when it comes to making pumpkin desserts, but when you are making raw desserts (and especially if you are strictly raw), it’s off the table. Don’t worry, though — you just have to make your own. All you need is a high-speed blender. Due to their natural sweetness, sugar pumpkins are a brilliant choice for making your raw pumpkin purée. To learn how to do this, see the pumpkin desserts listed below.

We can imagine that you’re ready to move onto the desserts, so without further ado, here are 15 fabulous fall desserts that capture the essence of the season. 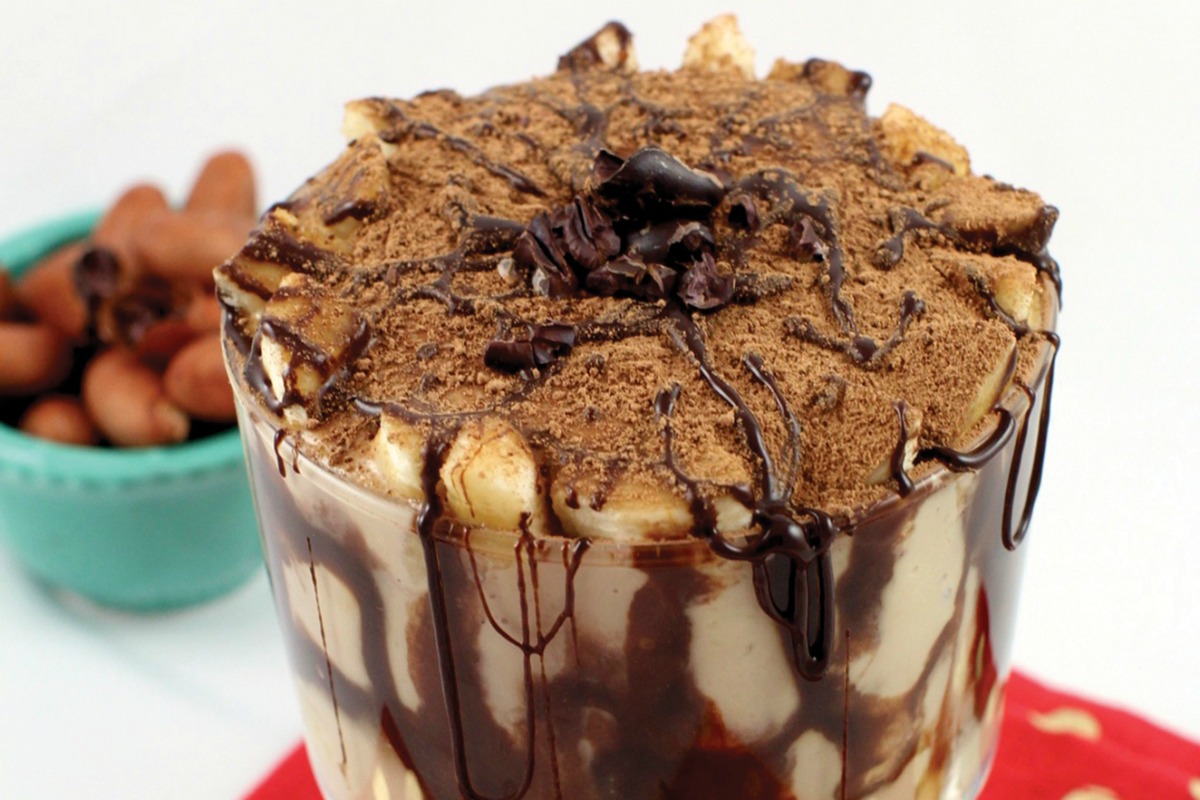 This raw Maple Banana Tiramisu Trifle is a mash-up of two favorite European desserts: English trifle and Italian tiramisu. It starts with a thick, decadent maple and coffee-flavored cashew cream that melts in your mouth and is then combined with a raw chocolate drizzle, followed by a topping of bananas. The result is a sophisticated dessert-for-two that is worthy of any special occasion — or anytime at all because it’s so easy to make. 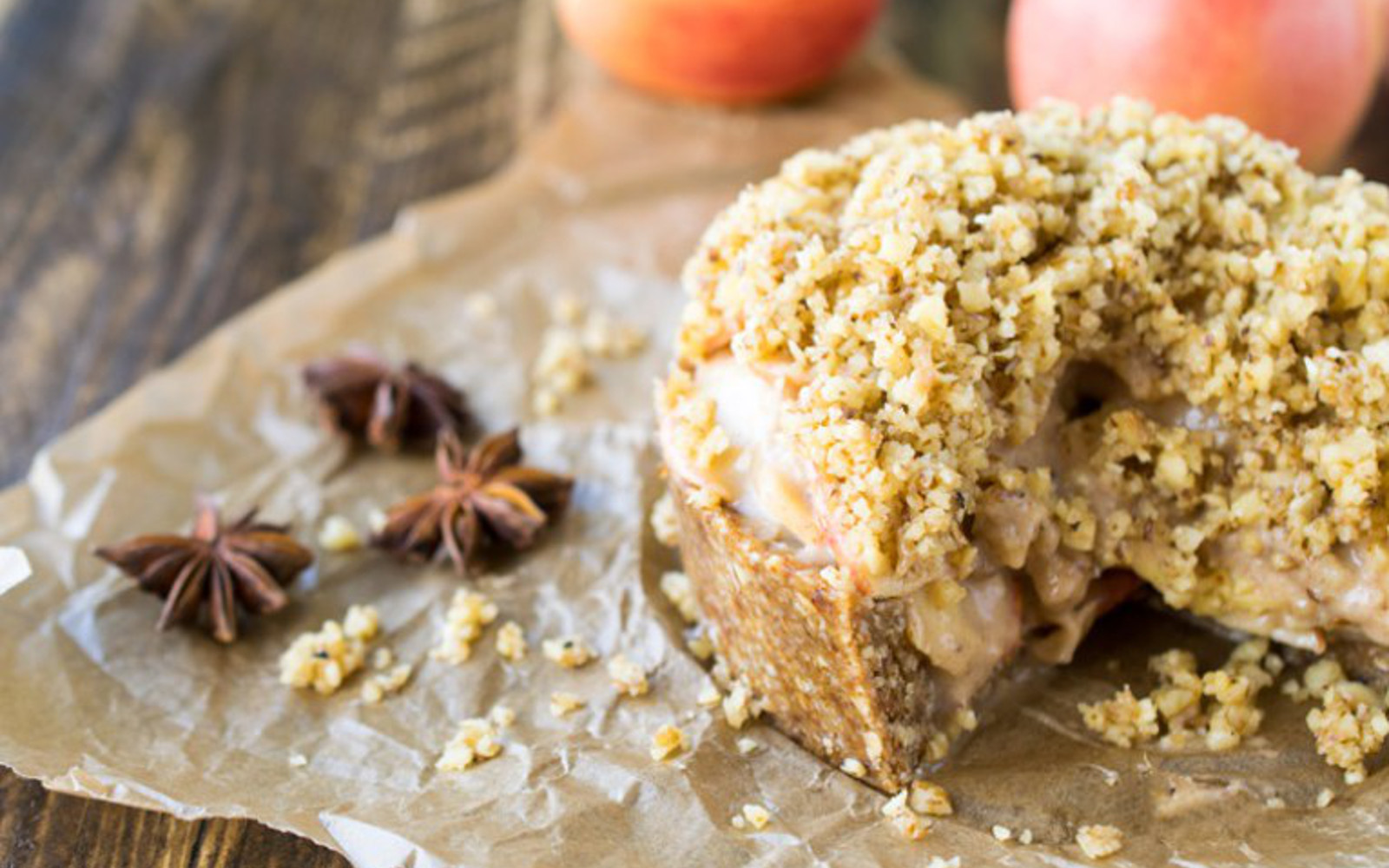 Eating apples raw is delicious, so you can only imagine how amazing this Raw Deep Dish Apple Torte With Walnut Crumble tastes! Made with sliced gala apples, sticky dates, oats, shredded coconut, and plenty of cinnamon, this little pie will fill your house with the scents of fall and fill your tummy with happiness. Serve with some coconut whipped cream on the side for added decadence. 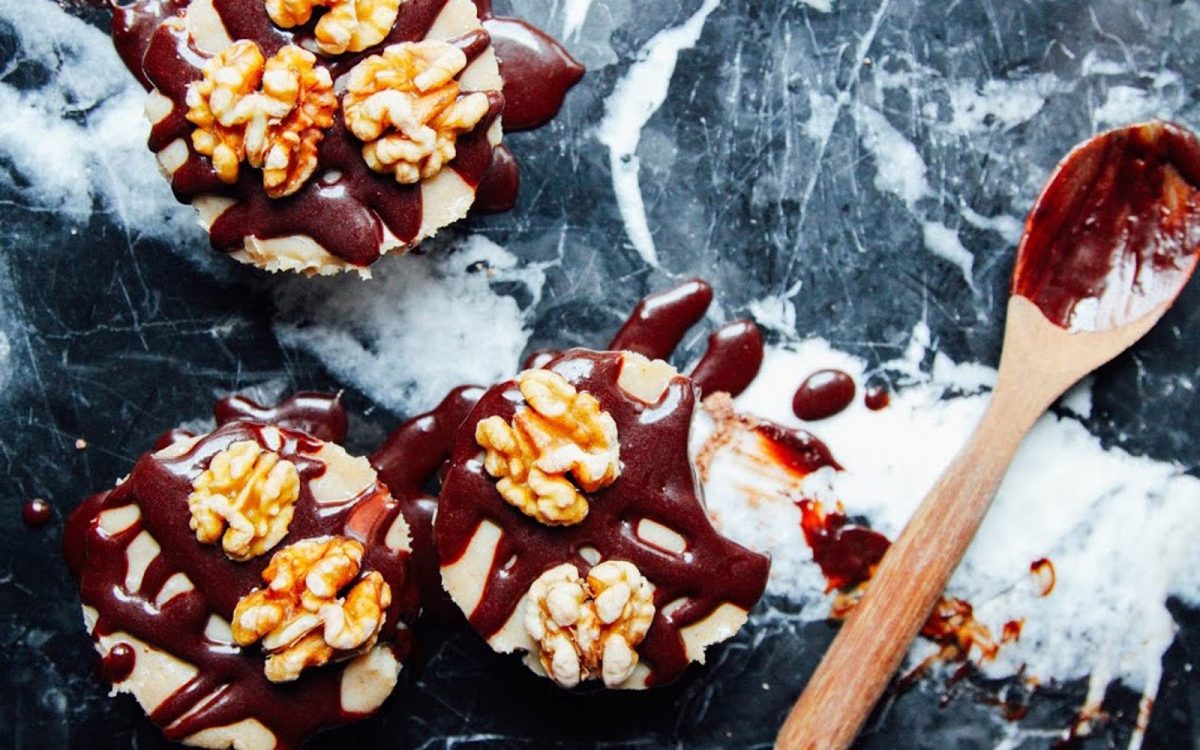 These mini Raw Chai Cheesecakes With Chocolate Drizzle are everything you want in a cheesecake and more because they’re full of wholesome ingredients, grain-free, and free from refined sugar! They have a sweet, creamy, and decadent cashew filling made better from a blend of warm chai-inspired spices that sits on a base of coconut flour and almond flour. The finishing touch is a drizzle of easy-peasy chocolate syrup and a sprinkle of walnuts. 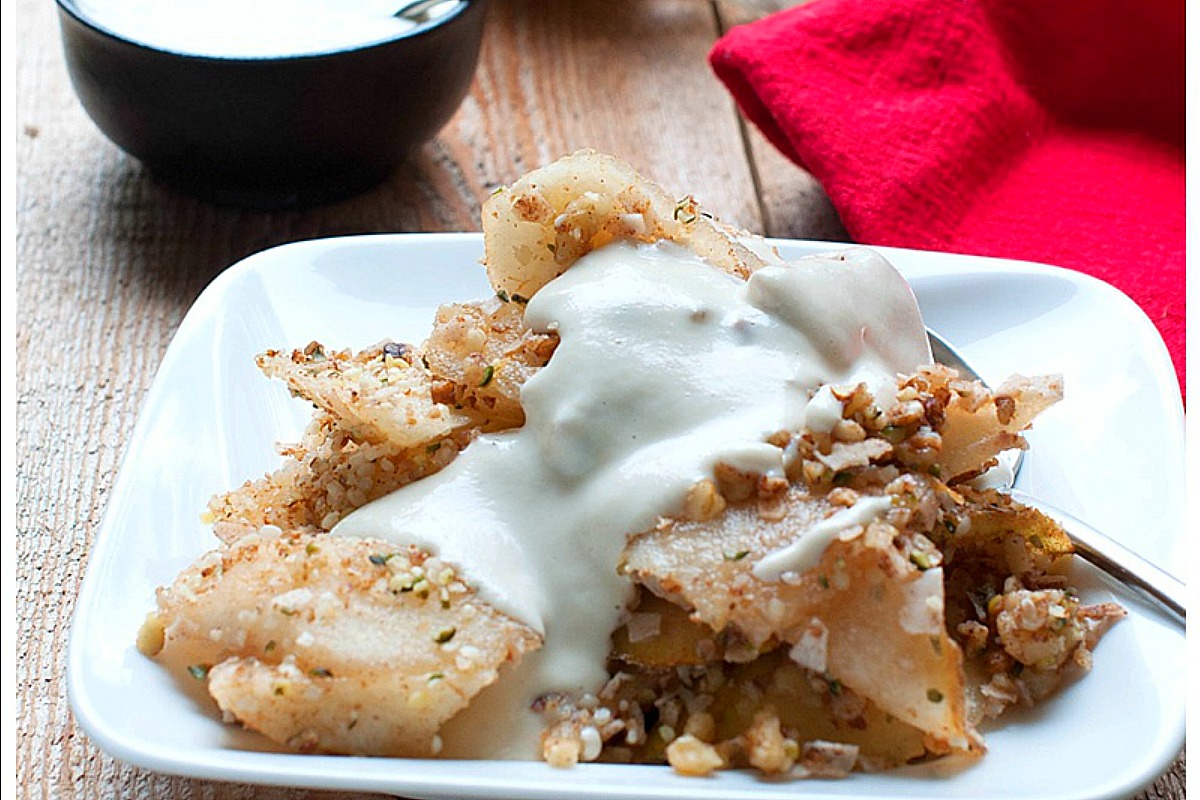 If you love spicy, fall-inspired fruit crisps, then you will love this raw Spiced Pear Crisp. While apples are usually the go-to for fall crisps, the pears in this recipe taste amazing tossed with a blend of warm spices. Instead of oats, the crumble is made from nuts and because it’s raw, you don’t have to bake a thing. Just toss everything together and you are good to go! 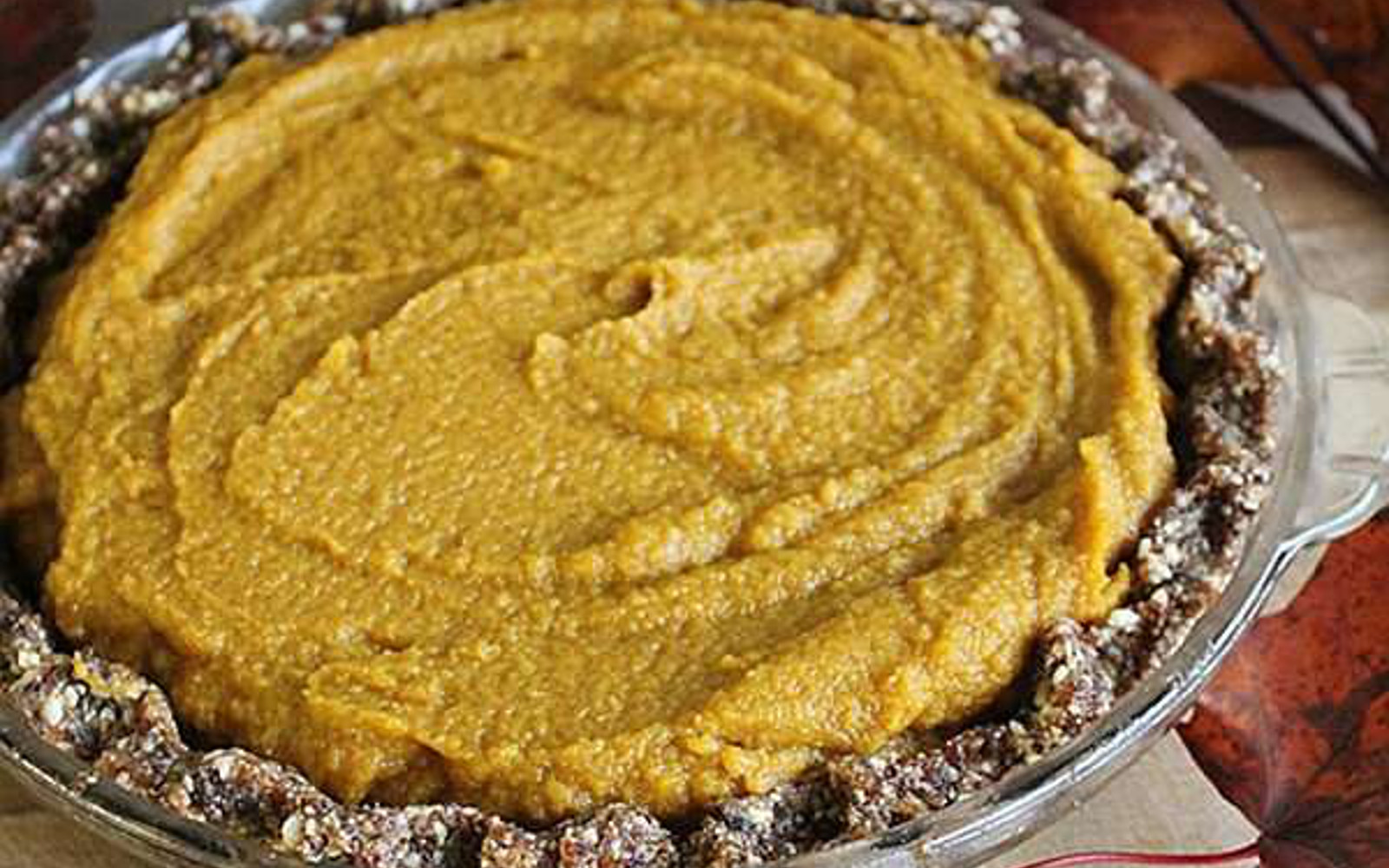 If you thought raw pumpkin desserts could not be done, then take a look at this beautiful Raw Pumpkin Pie! The slightly chewy crust is made from nuts and dried fruits and for the filling, all you need to do is blend cubed sugar pumpkin with dates, coconut oil, and pumpkin pie spice (of course). The result is a delicious pie that captures the spirit of the cooked version. This would be delicious served with a big scoop of raw vanilla ice cream. 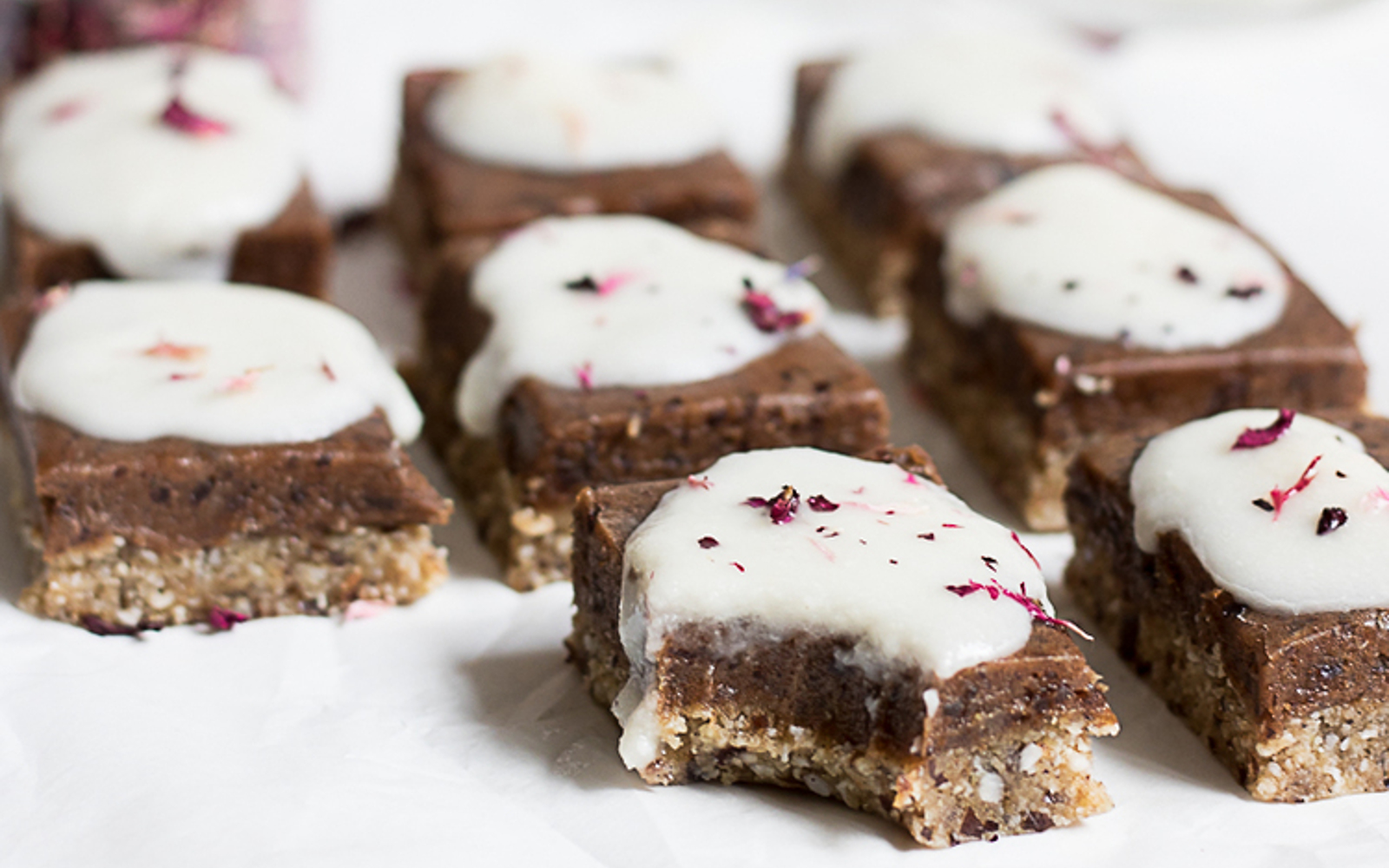 Nothing beats sticky buns hot out of the oven, except for maybe these Raw Cinnamon Bun Squares! It starts with a dense cashew-date-cardamom crust, then a sticky date-cinnamon layer, and finally a topping of sweet coconut cream frosting. Ooey-gooey, sweet, and tender, just like a warm cinnamon bun! 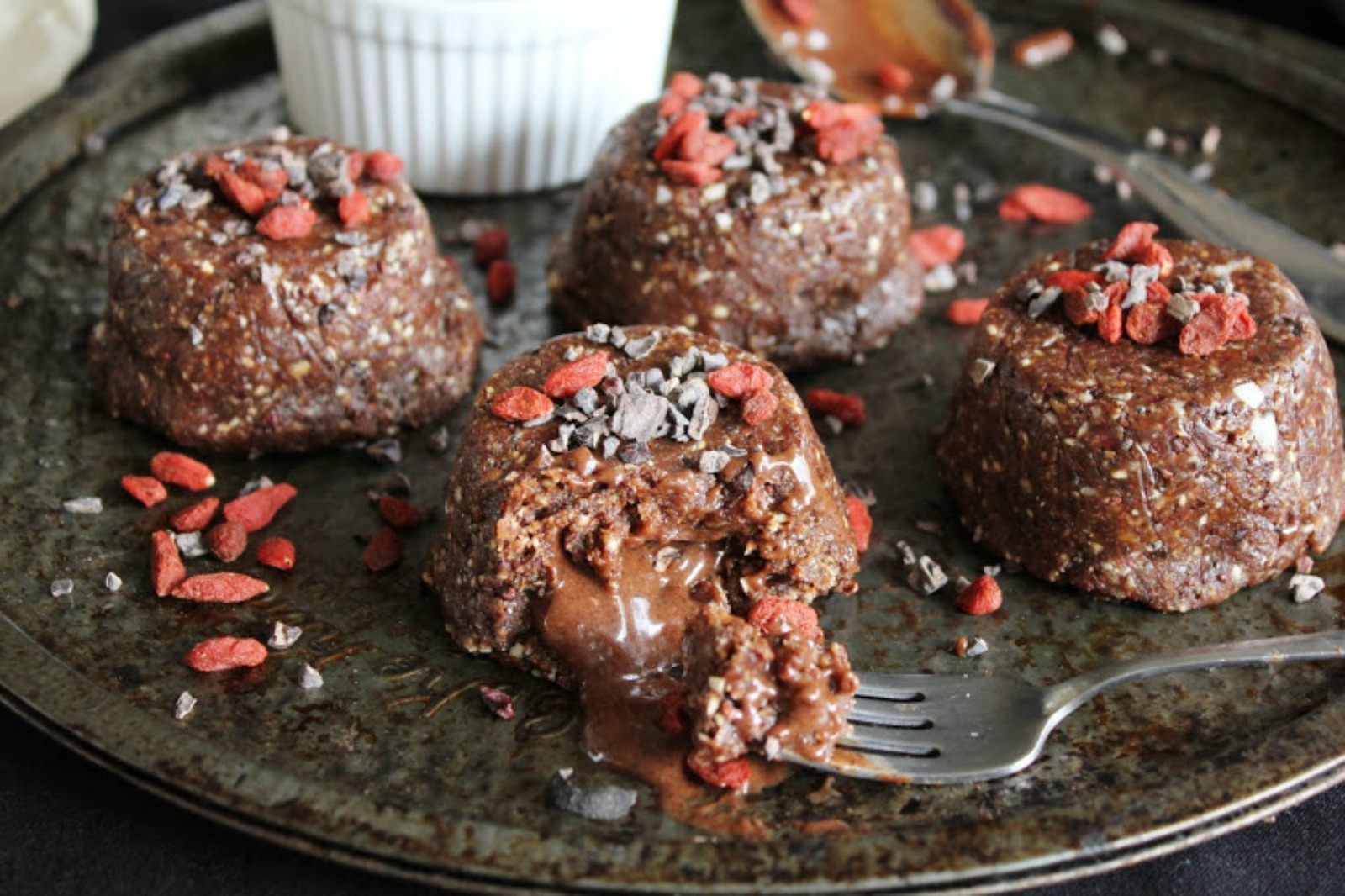 If you like chocolate, you’ll love these Raw Chocolate Molten Lava Cakes. It may not be hot, but if you’re a raw foodie, then nothing else will come closer to that experience that the thick, chocolatey center of these dark chocolate buckwheat-based cakes. Eating one is like a mega awesome super chocolate party in your mouth which results in an excellent, ethereal sense of well-being. 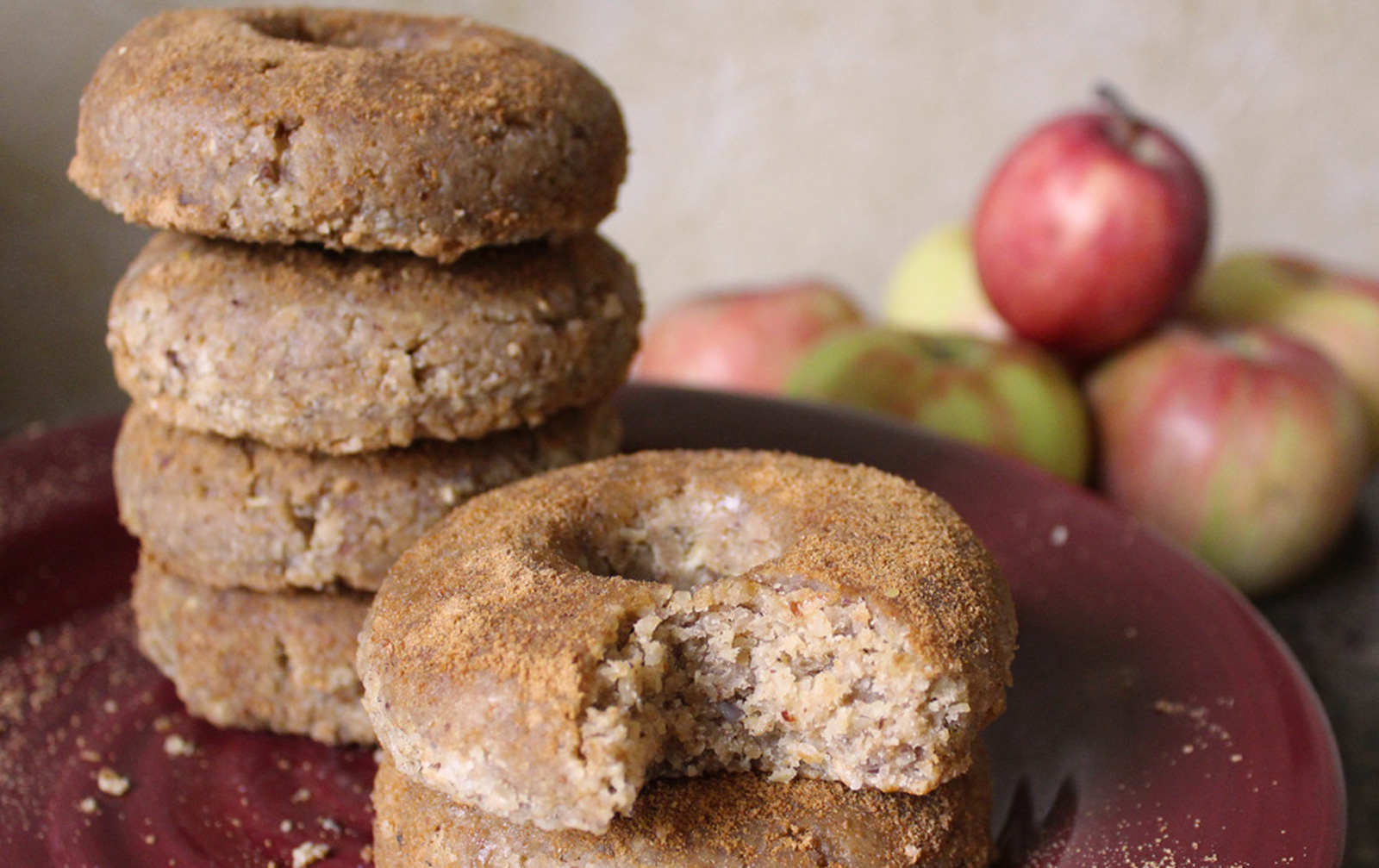 These Raw Apple Cider Doughnuts are dense, crusty on the outside, and soft in the middle – a perfectly lovely and healthful version of the traditionally fried treats. They’re also surprisingly easy to make. They’re made primarily from oats, nuts, and almond flour that are perfectly spiced with a blend of warm cinnamon and nutmeg. And don’t forget the finishing touch: a generous coating of cinnamon sugar! If you don’t have a dehydrator, don’t worry, because these can also be made at the lowest temperature setting in your oven. 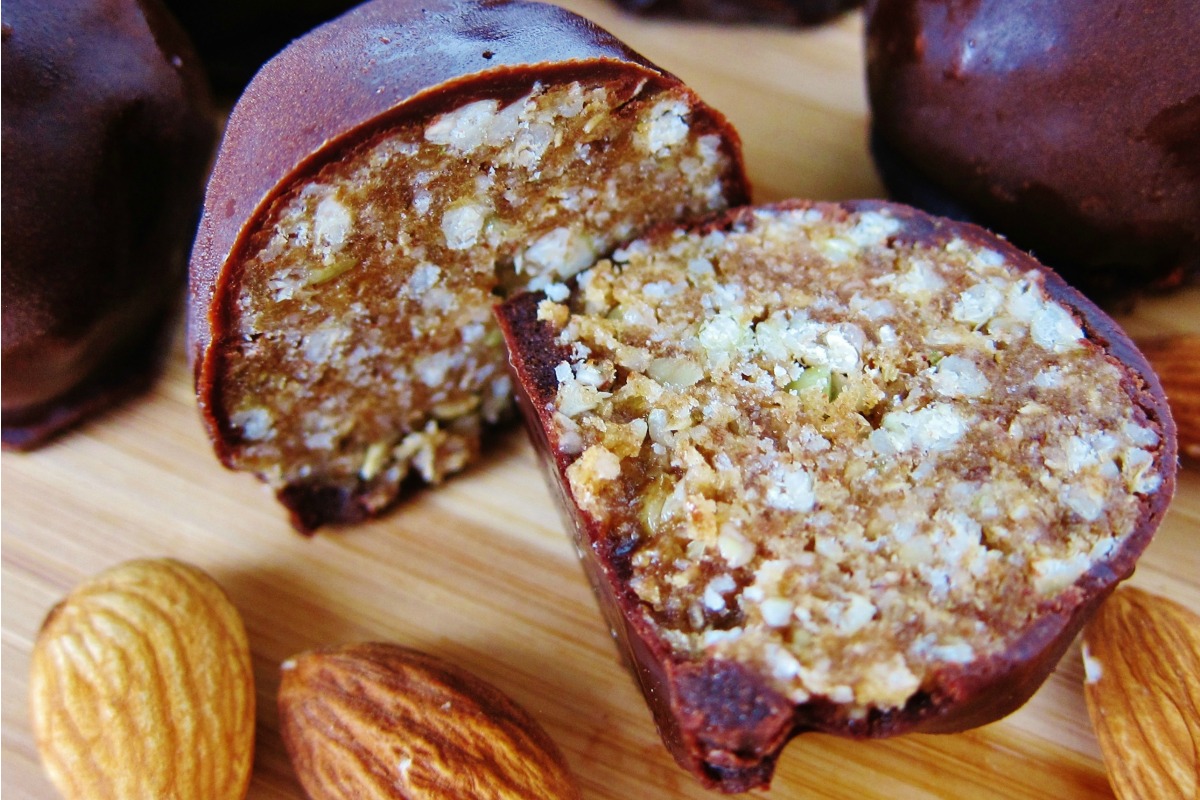 These delicious, addictive Almond Maple Crunch Truffles are made with a raw almond butter base, sweetened by dates and maple, with crunchy buckwheat groat center. As you take the first bite, it’s likely that they will remind you of rice crispy treats, only better. To make them even more amazing, they are bathed in a crave-worthy dark chocolate coating. Just try and stop at only one. 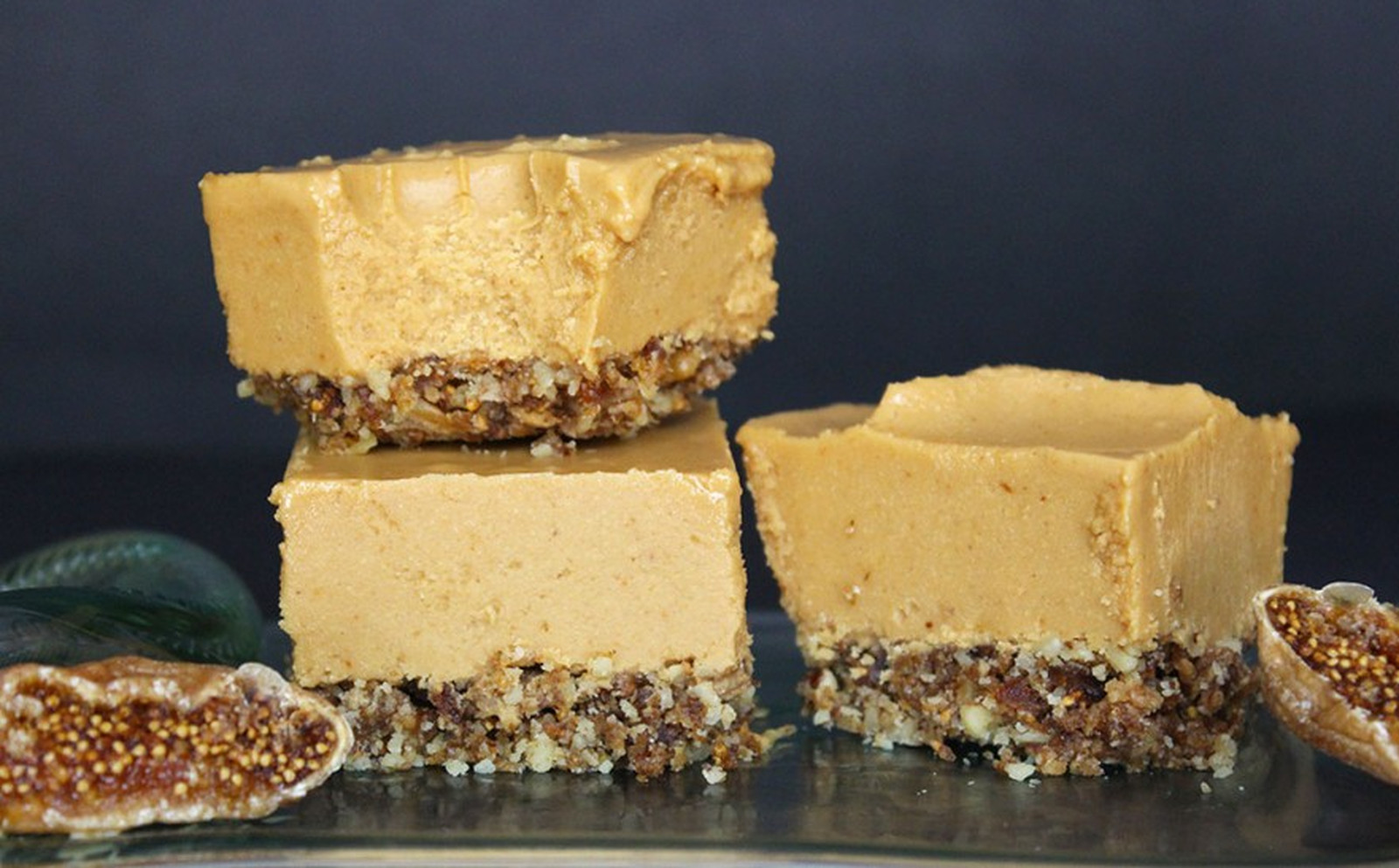 Figs are in season and one of the best ways to use them is to make these raw Peanut Butter Fig Bars. Their rich fudge-like texture will melt in your mouth and remind you just how well peanut butter and jelly get along. The fig in the crust is reminiscent of the sweetness of grape jelly, and those crispy fig seeds create an interesting and unique texture. 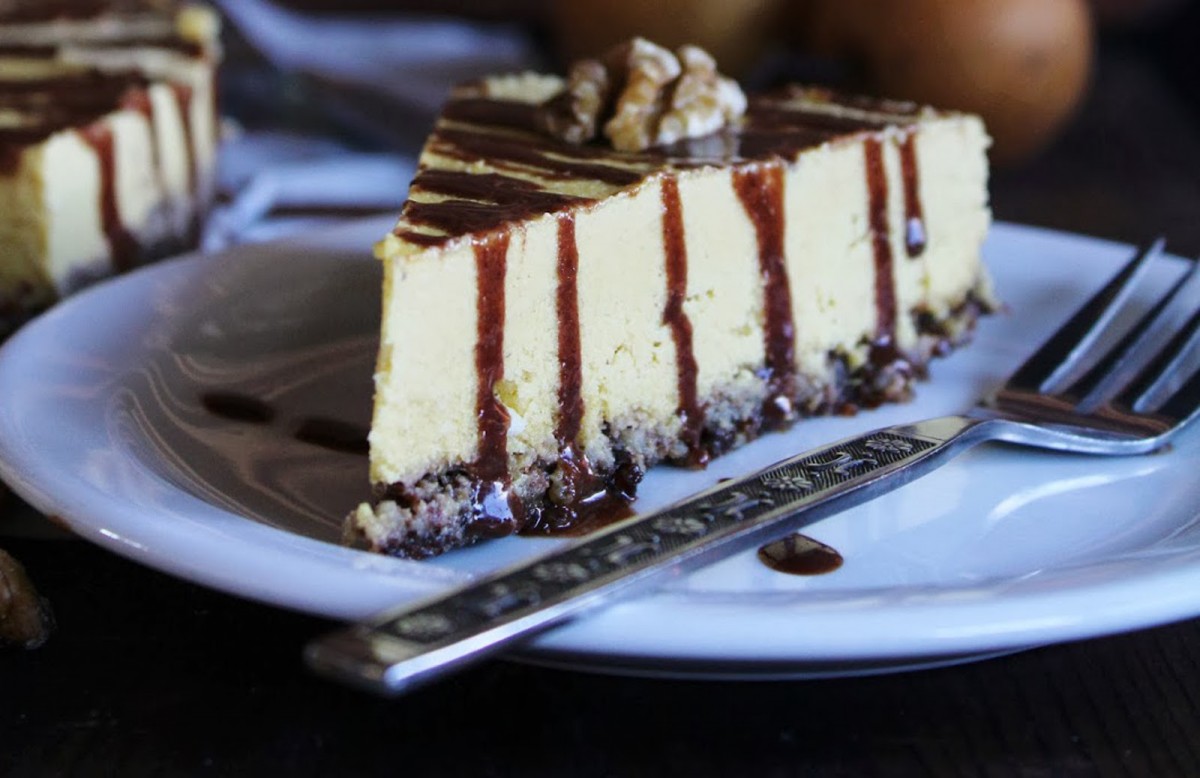 Biting into a forkful of this Pumpkin Cashew Cream Cake is an experience that has to happen. The cashew and sugar pumpkin-based filling is a creamy, sweet, slightly tangy slice of heaven while the simple crust can be made two different ways, depending on what you have in your pantry. Top this beauty with walnut pieces and a drizzle of raw chocolate sauce. 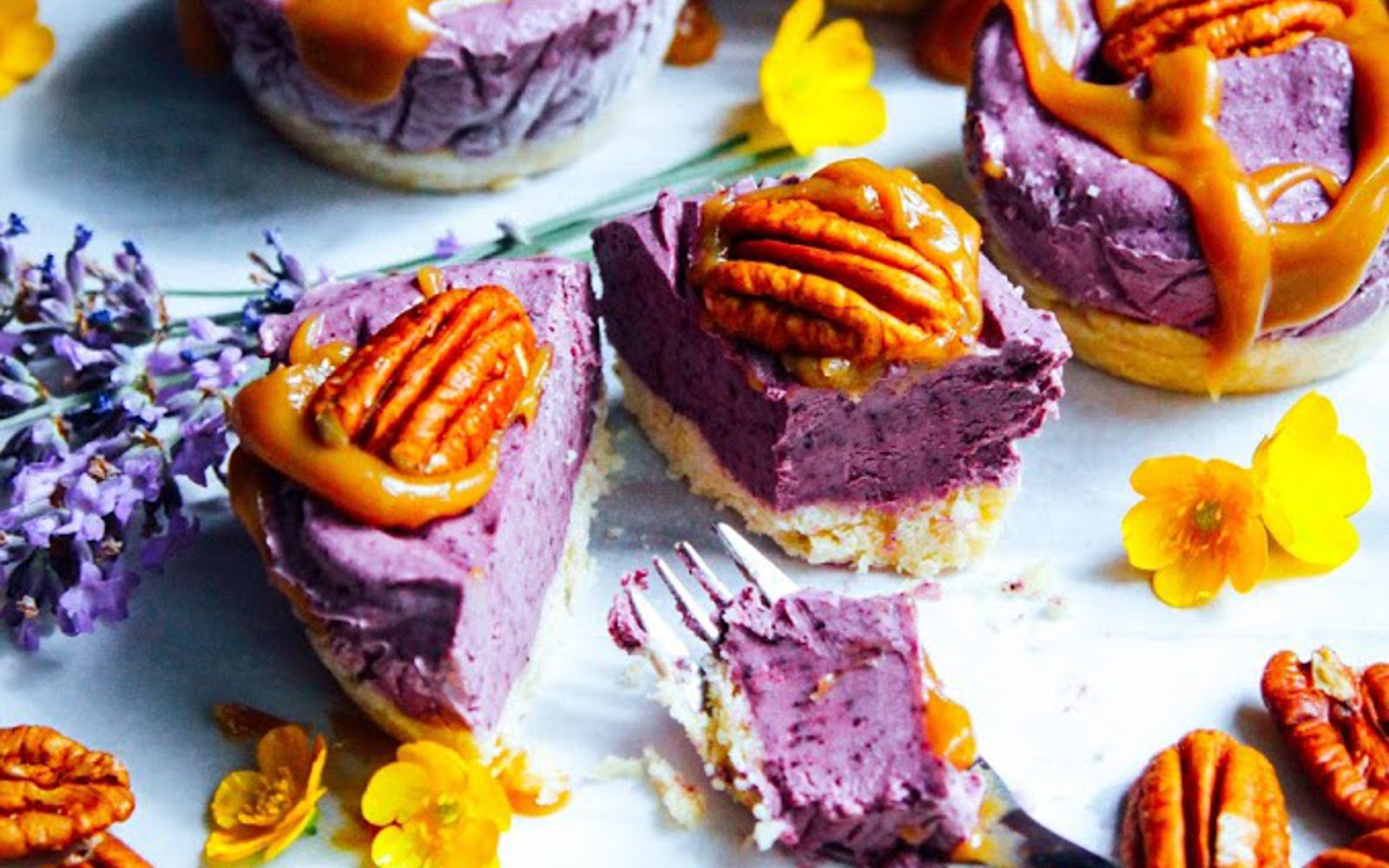 These Raw Pecan Blueberry Spiced Cheesecakes are creamy, sweet, fruity, nutty, and perfect for anytime. They have a light coconut and almond flour crust topped with thick blueberry pecan cheesecake batter, all drizzled in the quickest almond butter caramel you’ll ever whip up. You can make this recipe into a normal-size cheesecake, or keep them mini for convenience. 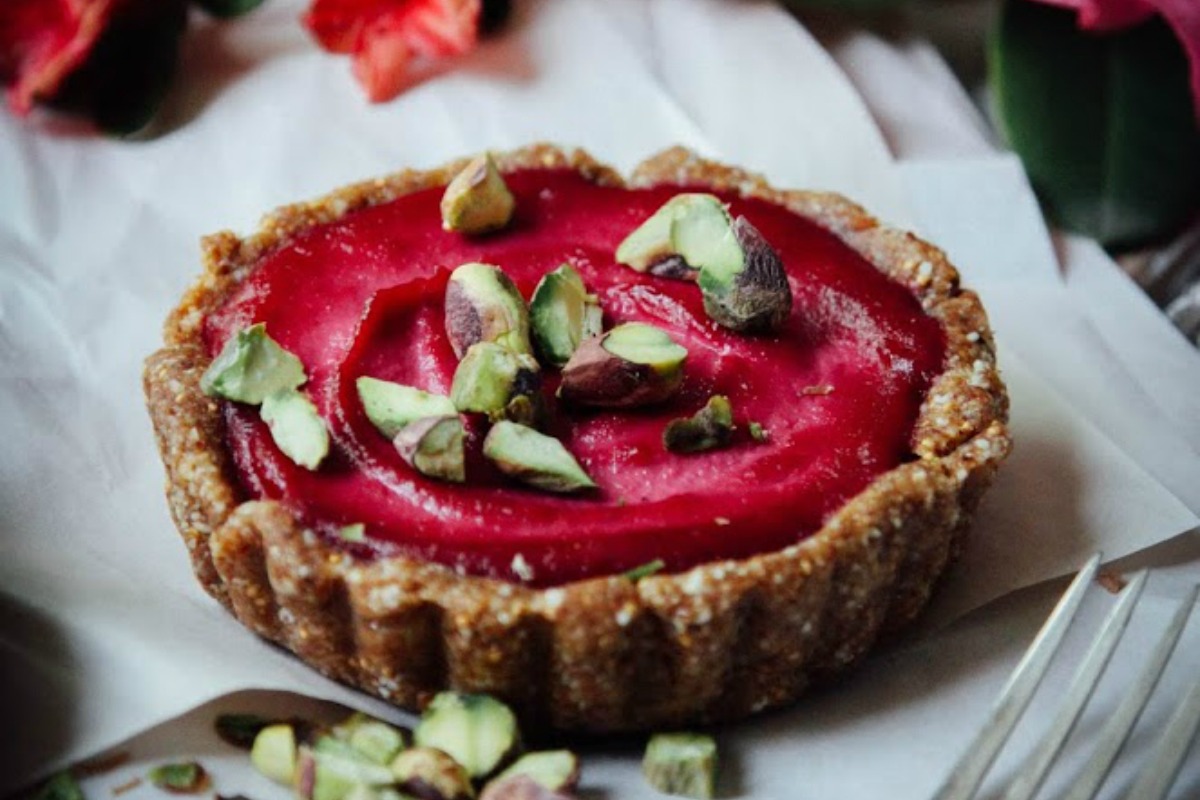 These Orange Beet Tartlets With Almond Fig Crust will make your belly rumble even if you just ate — after all, there’s always room for dessert. They are raw, vegan, gluten-free because the crust is made from almond flour, and soooo good for your body … and your taste buds. Let’s eat! 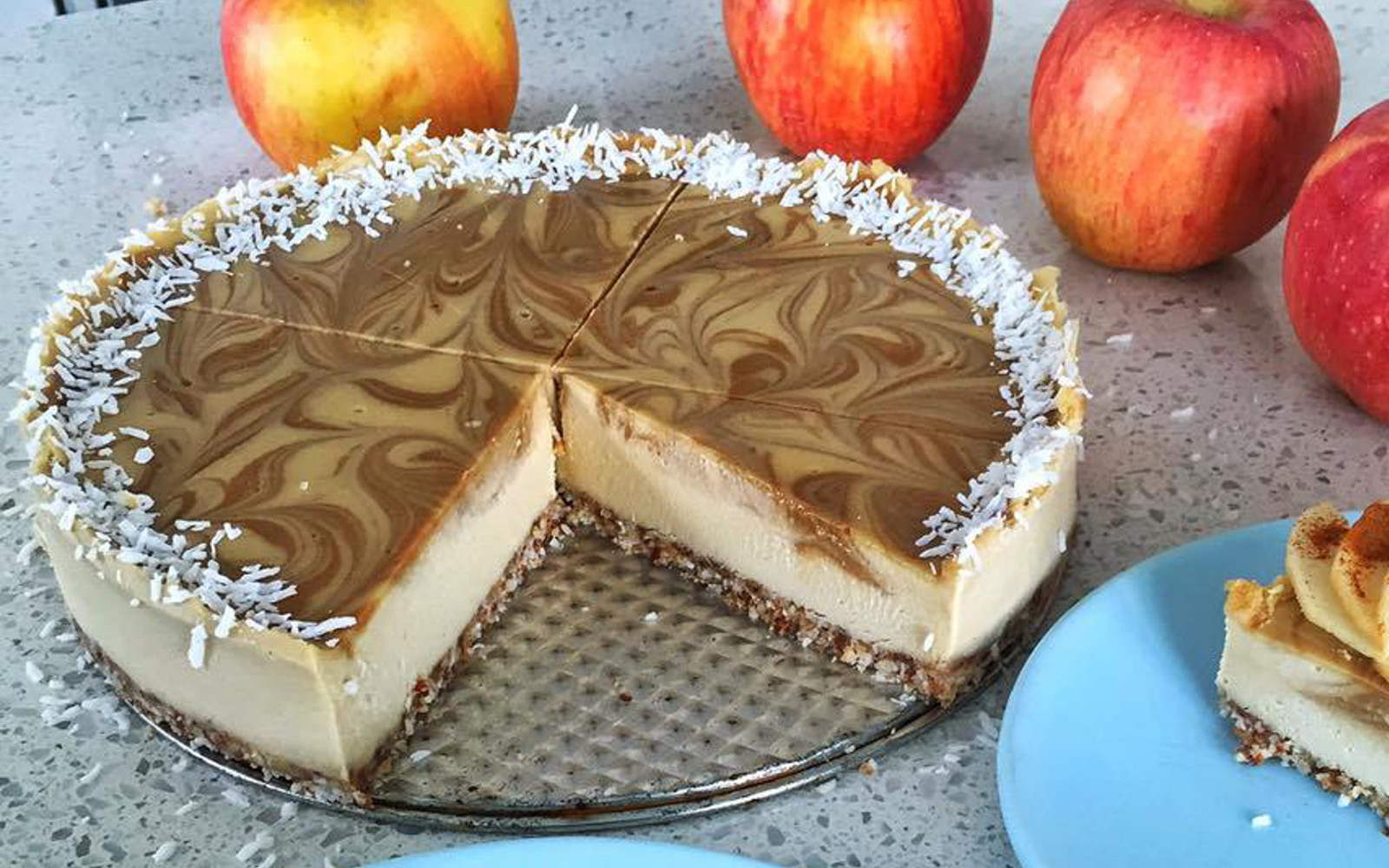 Embrace the fall season with this Raw Caramel Apple Cheesecake! It’s so creamy, with a subtle taste of apples, cinnamon, and that dreamy caramel sauce on top. The base is made from coconut and cashews, the creamy filling is made from cashews and apples, and an easy almond butter-based caramel is swirled on top. This is the perfect cake to bring to a fall party or to make just because. 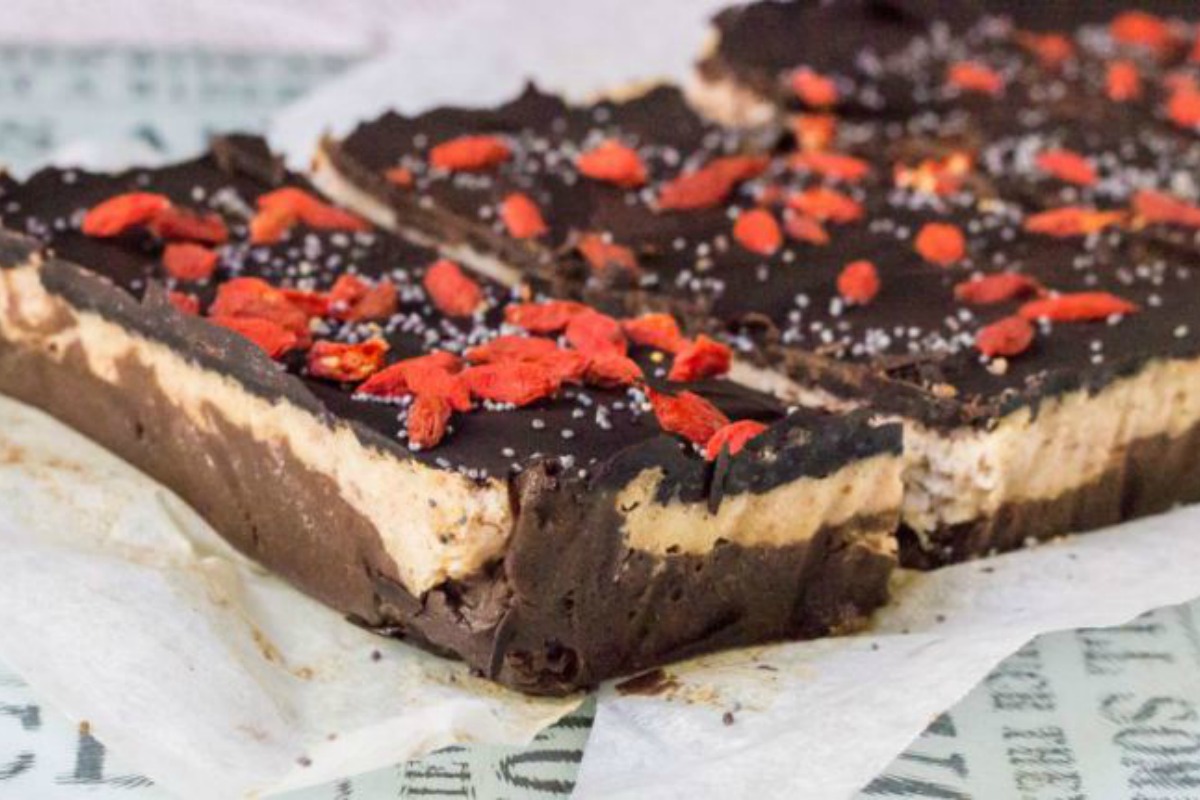 We love these Raw Stuffed Apple Brownies! A layer of cinnamon apple pie filling made from dehydrated apples sits between a chocolatey buckwheat and date base and a rich chocolate orange brownie top. The blackstrap molasses in the base just increases the level of nom to happy proportions, and the buckwheat chocolate base is so nice and silky compared to the slightly more chunky apple pie filling under the smooth and totally awesome homemade chocolate.

If you’re looking for more fall desserts, then we’ve got you covered — check out our raw vegan desserts page for more ideas and inspiration.