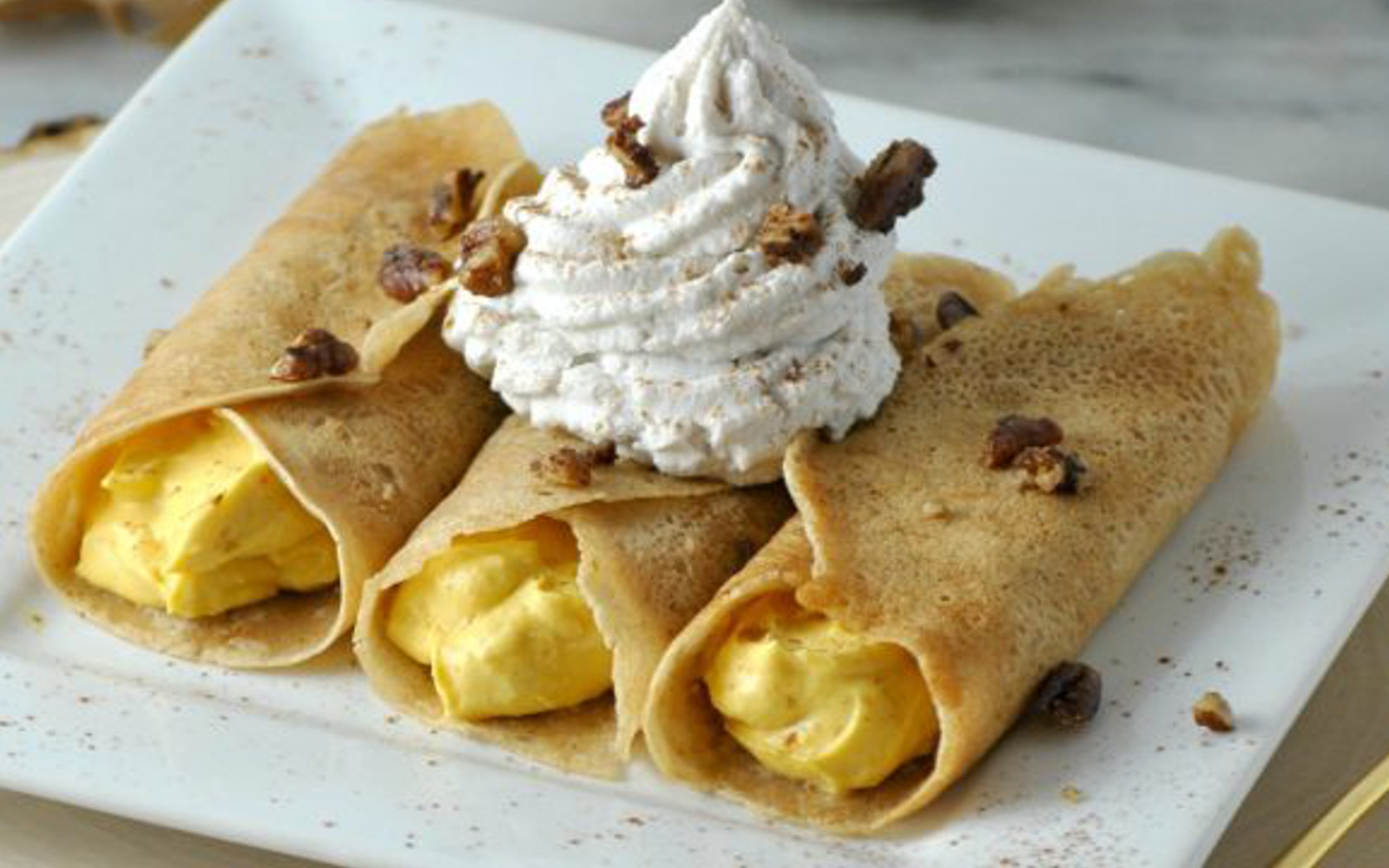 No, they aren’t just pancakes.  There is something more elegant and decadent about a crêpe.  Usually sweet, sometimes savory, it doesn’t matter.  Crêpes make a great meal within themselves. They can also be a cheeky snack, or, if you dress them up just right, they can be a pretty impressive dessert.

As autumn rolls in so does the smell of pumpkin spice, the abundance of sweet potato, the crunch of pecans, and the blending of apples and cinnamon.

These OGP recipes take all of those autumnal delights to create beautiful crêpe dishes that will keep you warm and cozy this fall. 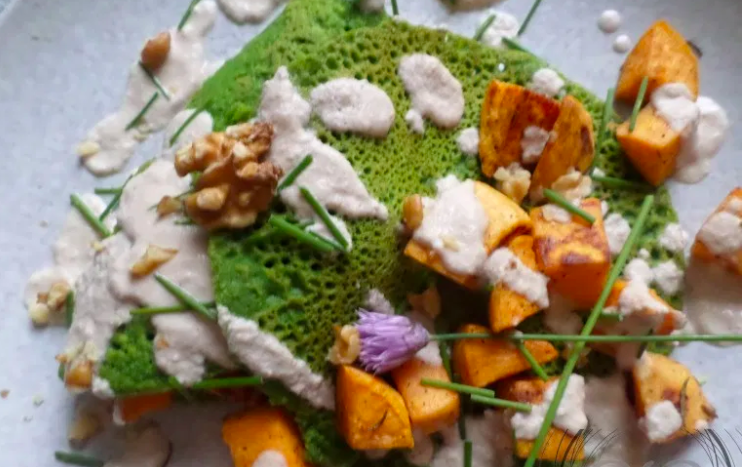 Let’s start with a savory dish.  These Spinach Crepes with Thyme Roasted Sweet Potatoes and Walnut Sauce by Anna Sue are made with all the colors of the rainbow.  This hearty recipe makes a wonderful lunch or dinner.  Sweet potatoes give you that taste of fall and a chickpea- and spinach-based crêpe make for a highly nutritious and protein-filled meal. 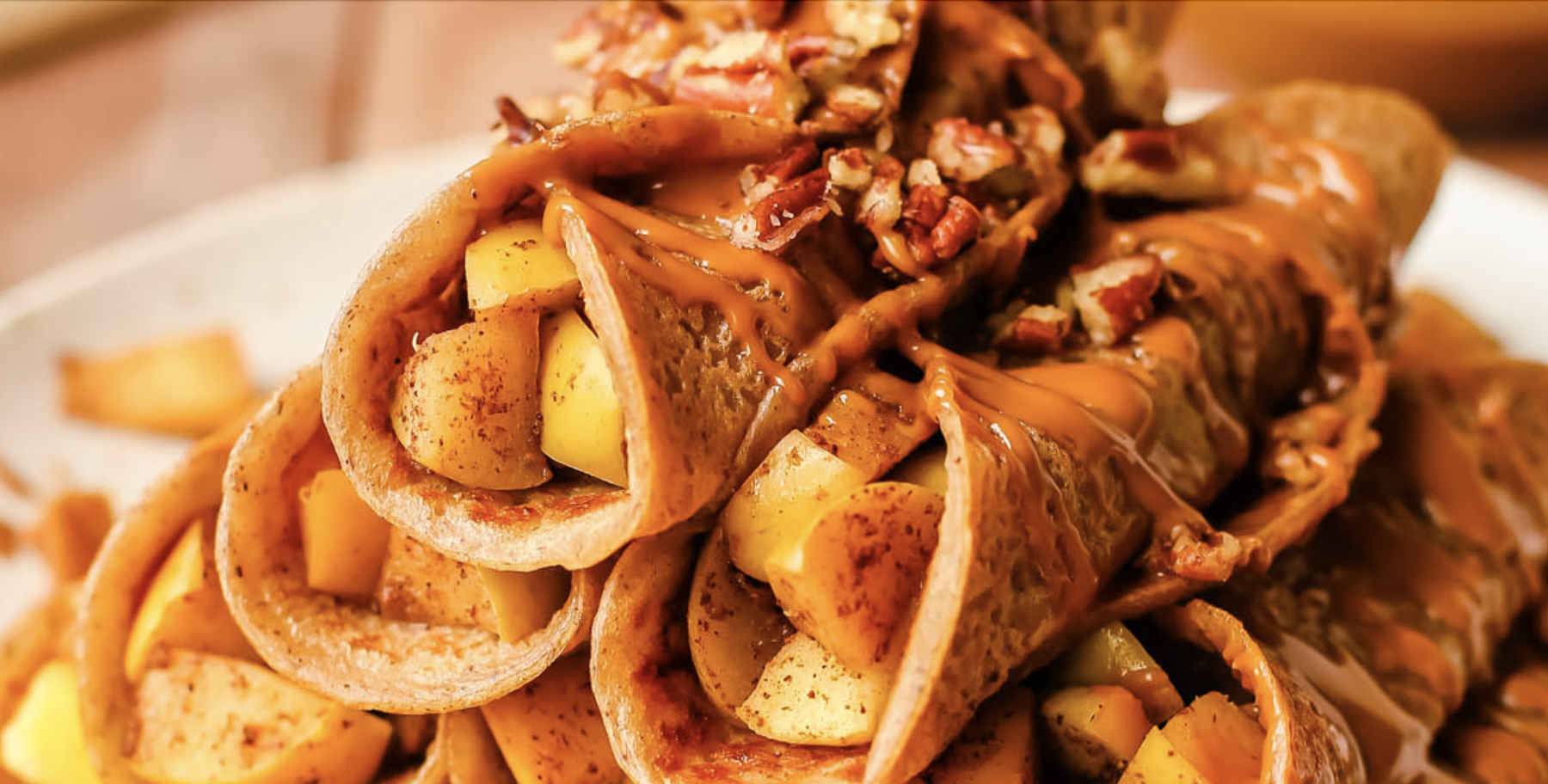 You can hardly get more of an autumnal aroma than apple and cinnamon.  These Cinnamon Apple Crêpes by Harriet Porterfield are actually mini cinnamon crêpes that have been filled with a yummy apple pie-stye filling.  Still want more?  How about a sprinkling of chopped pecans and a drizzle of maple syrup. 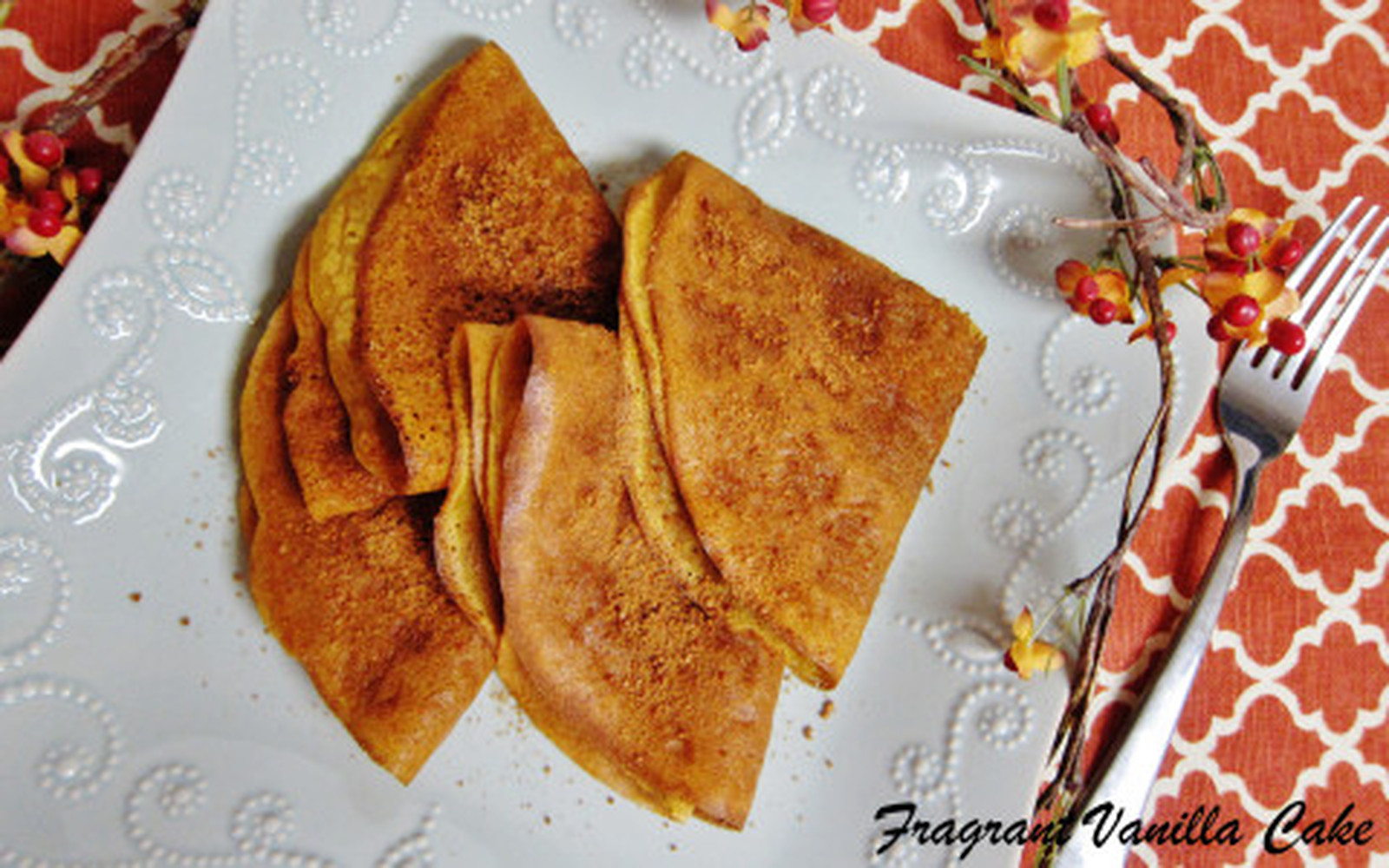 Okay, so pumpkin spice screams fall, too.  You can have yourself a pretty fancy breakfast, or an elegant dessert with this recipe for Pumpkin Spice Crêpes by Amy Lyons.  For extra love, how about serving your crêpes with a sprinkling of cinnamon sugar or a big scoop of your favorite vegan ice cream. 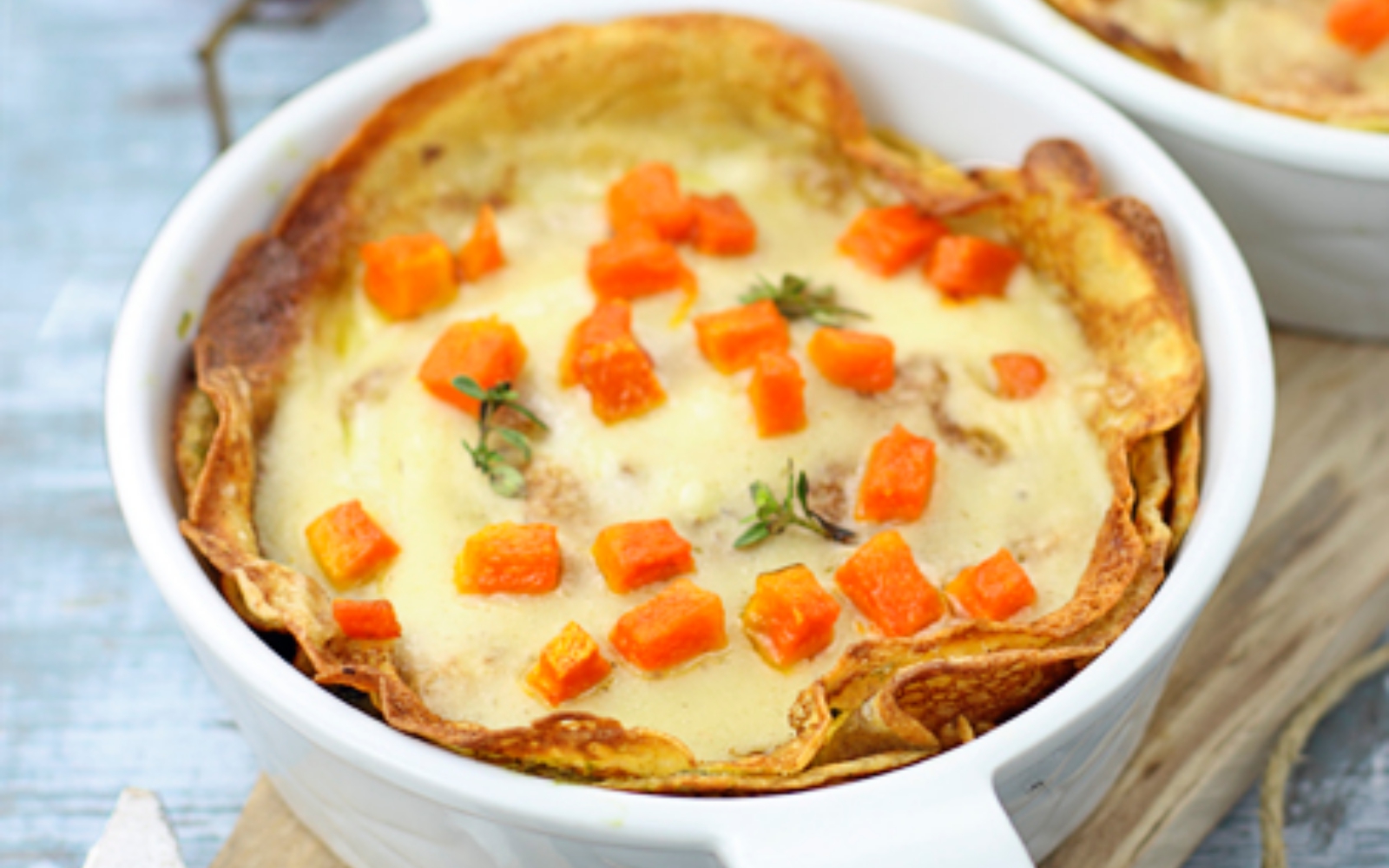 Here is another savory crêpe to try.  Simona Malerba‘s Lacinato Kale and Pumpkin Crepes are hearty and satisfying and can easily make a full meal. This is assembled almost lasagne-like, with vegan bechamel sauce and vegetables layered between chickpea-based crêpes. 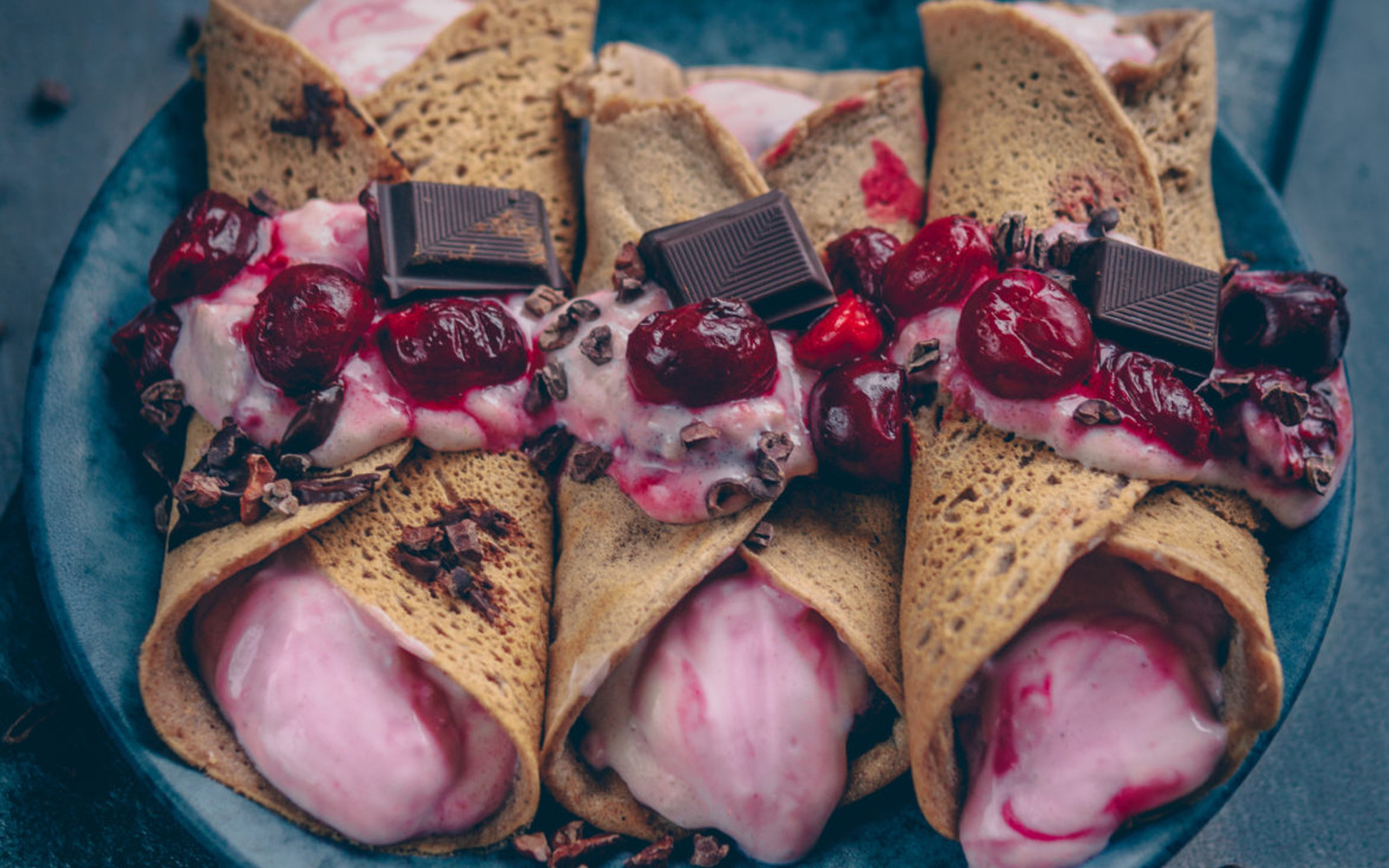 These crêpes look stunning and definitely a little naughty pilled onto a plate.  This recipe for Peanut Cinnamon Crepes With Cherry Yogurt Filling by Laura Grosch is a lot healthier than first appears and even works as a breakfast.  The crêpes are made with buckwheat and peanut flour, and the filling is a combination of vegan yogurt and frozen cherries. Cacao nibs and dark chocolate finish everything off. 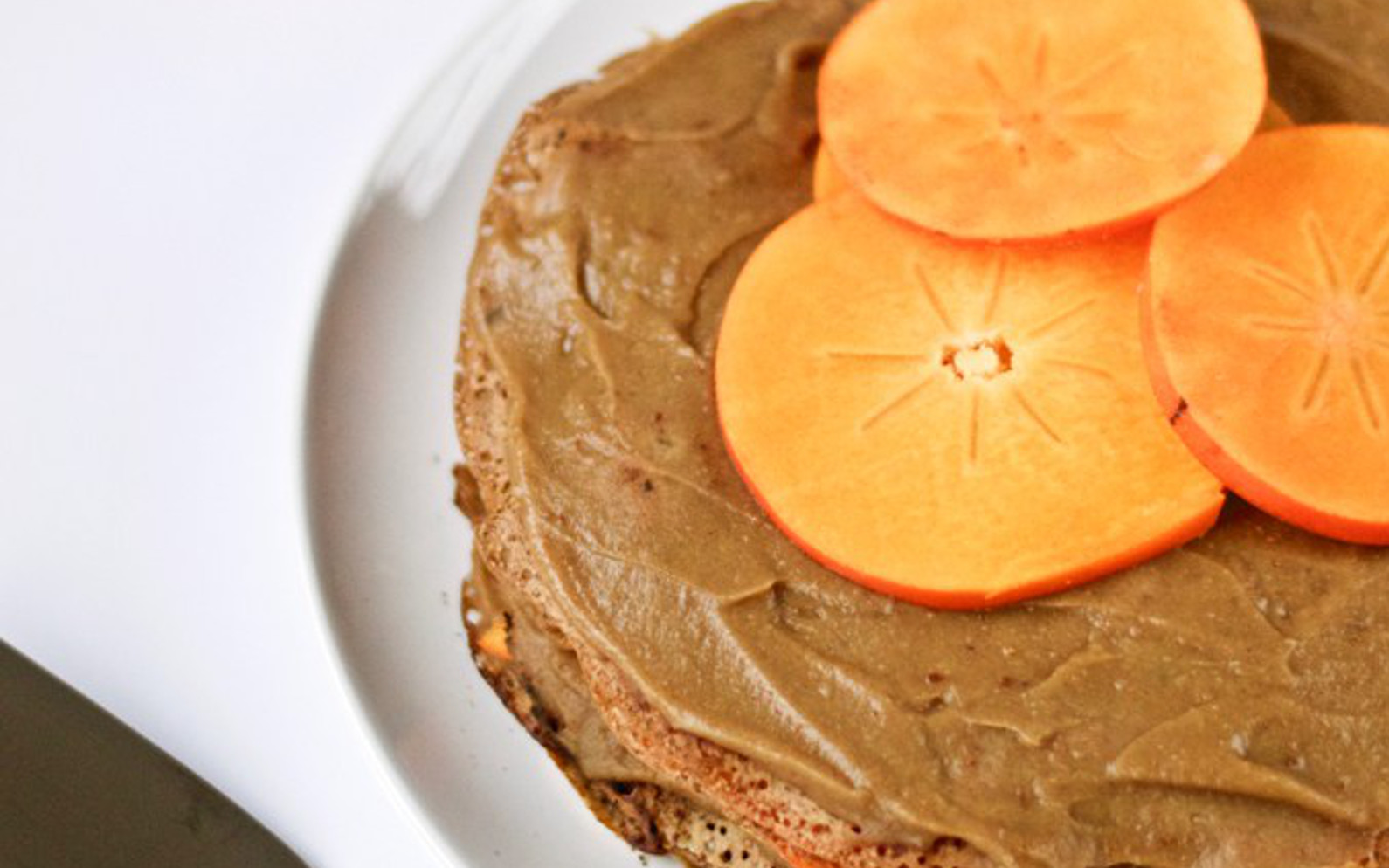 Chestnuts and Persimmon certainly say fall! This Chestnut Persimmon Crêpe Cake by Lucie Javorska looks decadent and indulgent but is secretly quite healthy.  Chestnut purée, which is sweetened with dates, and slices of fresh persimmon are layered between wheat flour-based crêpes to make a cake that works as a hearty breakfast or a delicious dessert. 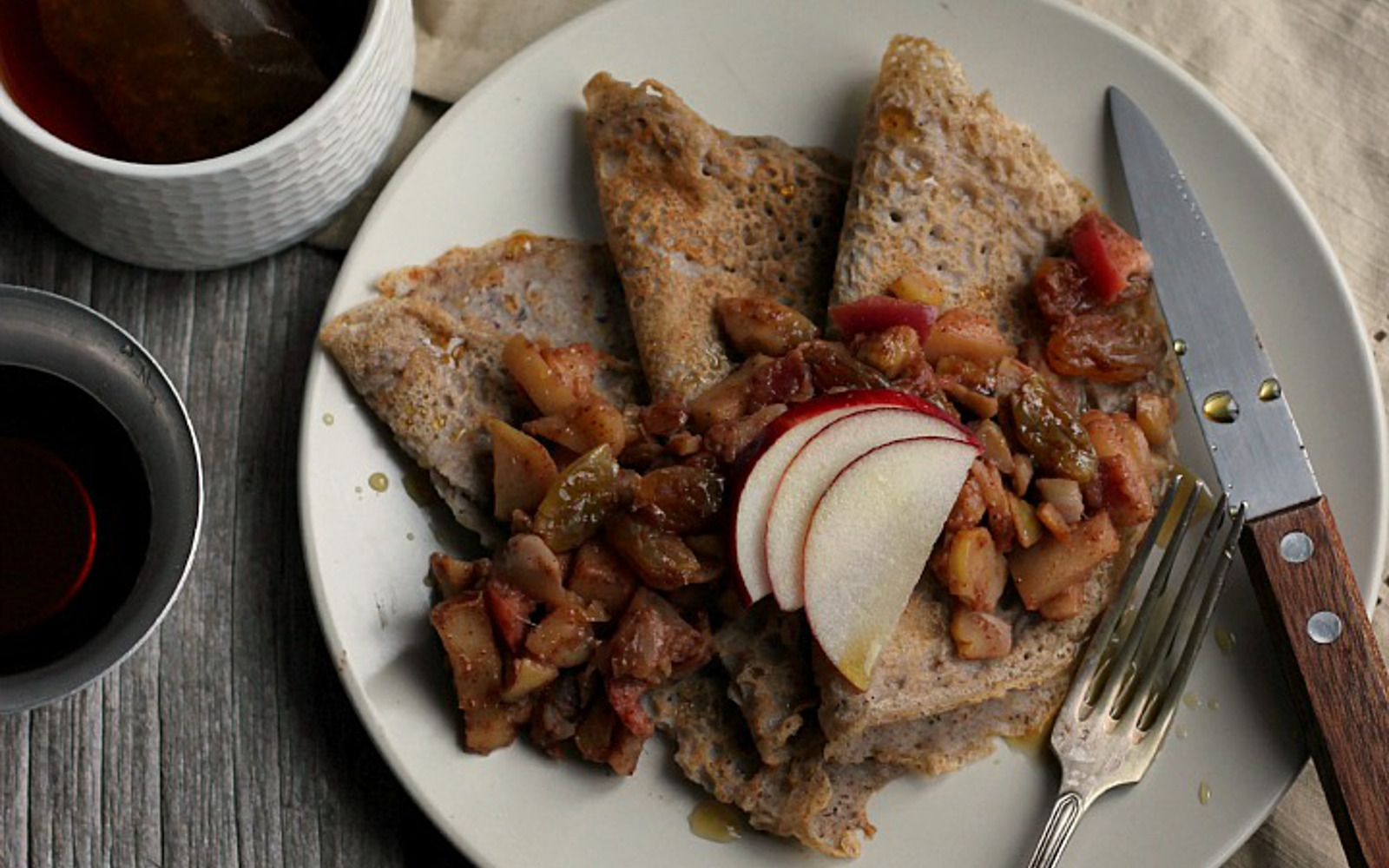 Here’s another recipe for a healthy breakfast crêpe.  These Maple Buckwheat Crêpes With Spiced Apple Chestnut Relish by Jodi Kay make a perfect autumn dish that fills you with all the fall flavors of apples, chestnuts, cinnamon, and nutmeg. 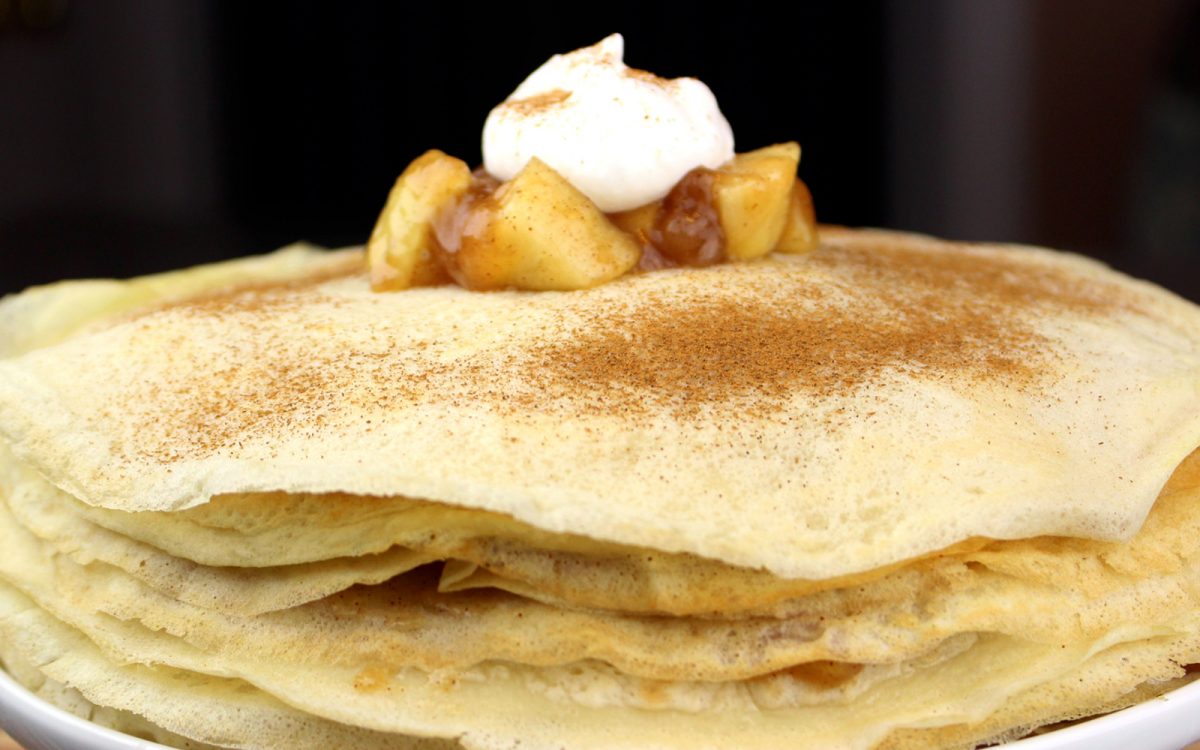 Get yourself a generous slice of this Apple Crêpe Cake by Gretchen Price.  A delicious apple pie filling is blended into a compote and layered between wafer-thin crêpes. Here, you can choose from an OGP list of amazing apple pie filling recipes. Serve your crêpe cake with more apple pie filling and a scoop of vegan ice cream.

With pumpkins in the batter and in the filling, you can’t ask for much more with these Pumpkin Crêpes With Cinnamon Coconut Whipped Cream and Candied Pecans by Gabrielle St. Claire.  Roll these crêpes around a pumpkin and vegan cream cheese filling, and serve them with a big dollop of cinnamon whipped cream and candied pecans. 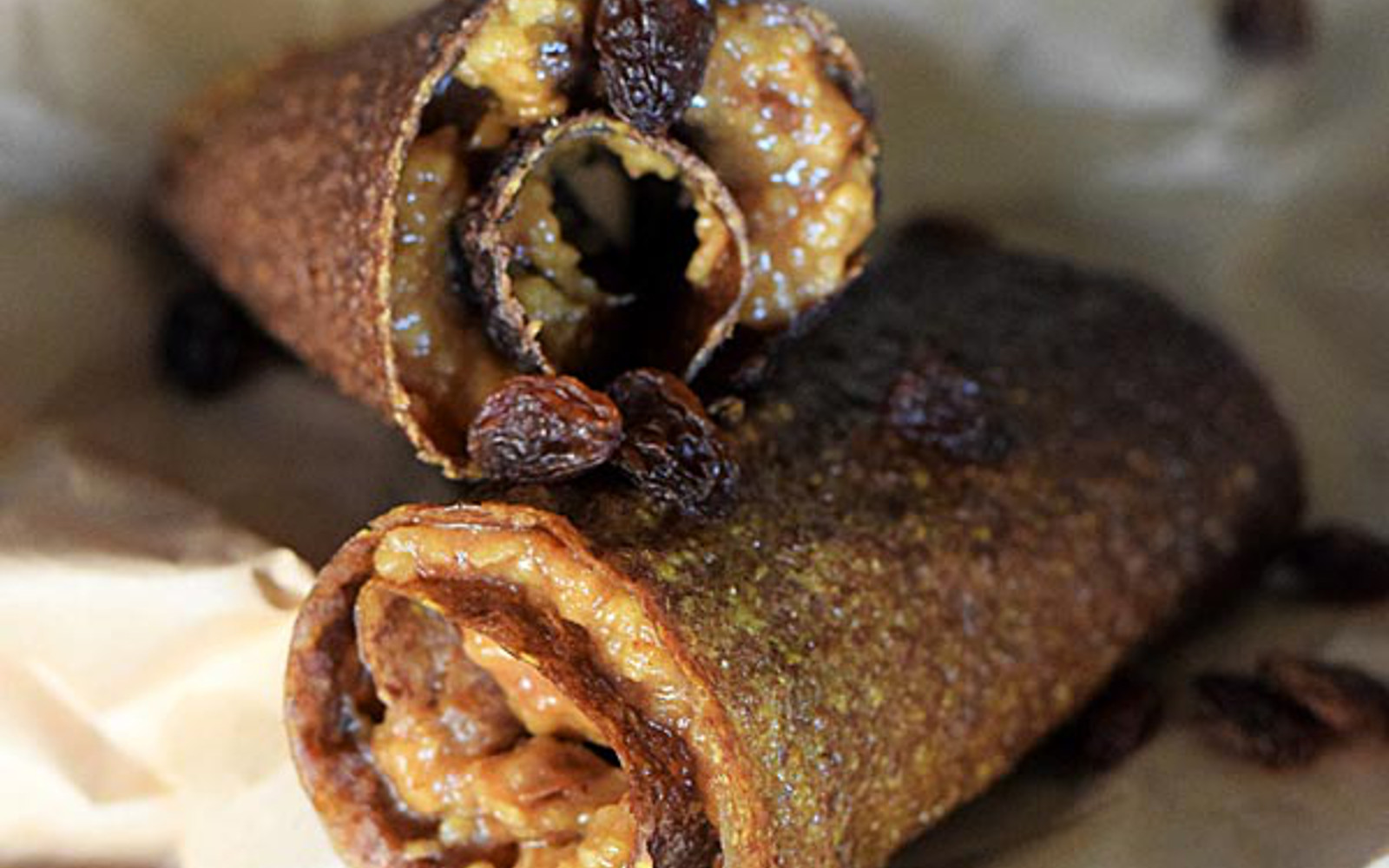 And finally, for those of you on a raw diet, there is no reason to miss out on an autumnal treat.  This recipe for Raw Crepes with Caramel Apple Filling by Heidi Turunen uses bananas, flax meal, and vanilla to make the crêpes. They are then filled with a raw apple pie filling made from apples, dates, nut butter, cinnamon, and raisins. 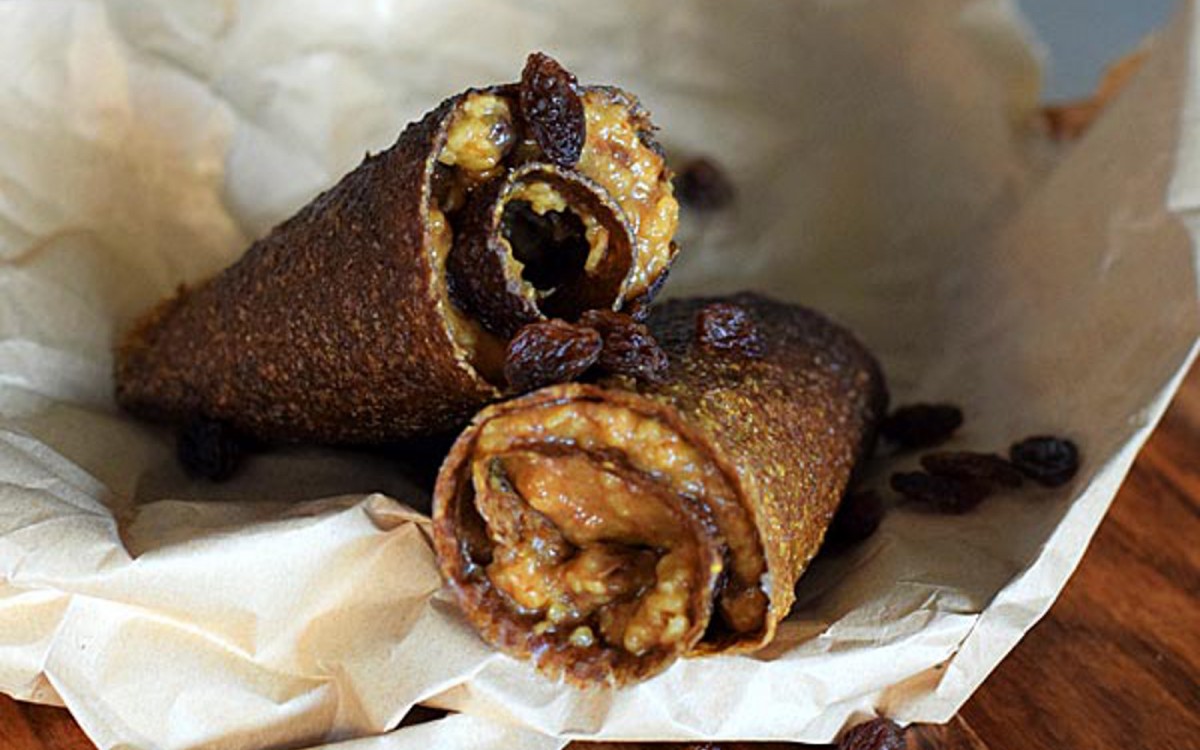