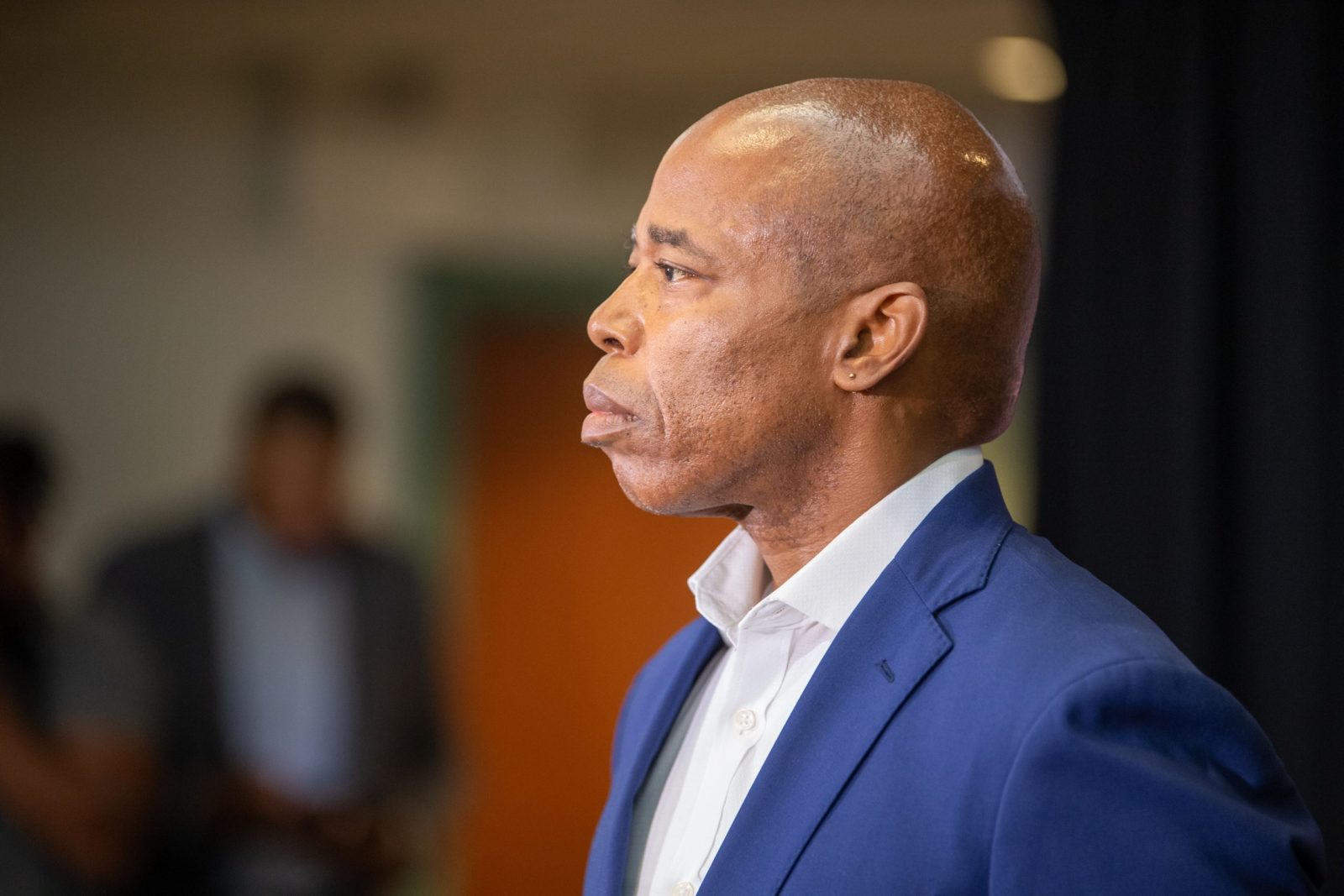 Eric Adams has been serving as the 110th mayor of New York City since January 1st, 2022. Adams is lauded for his plant-based food policies, animal welfare rallies, and environmental pledges. How has the new mayor been doing so far?

Immediate Strides in Boosting Public Health Through a Plant-Based Lifestyle

With a fervor that can only be rivaled Michael Bloomberg’s 2006 ban on most trans fats in NY restaurants, it only took Eric Adams a month after his appointment as mayor to implement the Vegan Fridays program for all public schools in New York. The Vegan Friday Program is an extension of Adams’ Meatless Mondays initiative and his ban on all processed meats in New York’s schools. With the additional announcement of city-wide food policies, Adams is working hard to honor his reputation as a plant-based champion. But his first acts as mayor have been received with mixed enthusiasm.

As a New York State senator, Adams had already set up plant-based initiatives in the interest of public health and disease prevention. Together with the NYC Health + Hospitals/Bellevue and Brooklyn Borough, Adams established a 400,000 USD program back in 2018 to support patients in their transition to a healthier lifestyle based on a plant-based diet and whole foods. A plant-based diet has been shown to alleviate the symptoms of chronic diseases such as cholesterol, cardiovascular disease, and Type 2 diabetes. The mayor has been open about his battle with Type 2 diabetes and how a plant-based diet has helped him reclaim his health and maintain a healthy weight.

Adams has also voiced his support for Michelle McMacken, the vegan doctor who was announced as the new Executive Director of Nutrition and Lifestyle Medicine for NYC Health + Hospitals in January this year.

“Dr. McMacken is a trailblazer who knows how to get stuff done. She knows the power of lifestyle medicine to reverse chronic diseases, transform lives, and combat generations-long health inequities. I am proud about the innovative work she has been doing at Bellevue, and it is truly exciting to see her expand her mission to all our NYC Health + Hospitals facilities in this new role.” McMacken’s program Bellevue Plant-Based Lifestyle Medicine Program helps people experience the benefits of a whole foods plant-based diet.

But Adams’ Vegan Fridays programs for New York’s public schools have the public divided. While some welcomed the dietary shift and applauded the mayor’s initiative, others noted that the meals were not entirely vegan and were skeptical about the quality of the meals.

“I would love for the conversation to actually be much more about where the food is sourced from,” State Senator Jessica Ramos told the New York Times. “A lot of these vegan lunches that we saw were these burritos that come in a plastic wrap and are clearly processed.”

The new mayor has vowed to implement more substantial programs “to reduce diet-related health inequities and to prevent nutrition-related illnesses.” This includes measures to phase out unhealthy meals in jails and shelters, the MeatOut initiative, and financial incentives such as the Supplemental Nutrition Assistance Program.

During his campaign, Eric Adams had made bold environmental promises and stated that “New York City should globally lead by example in the face of climate adversity.” Next to revolutionizing the food policies, Adams has ambitions to turn New York City into a “wind power hub” and “promote a green energy economy.” And it looks like the mayor has already taken some action to fulfill these promises.

In January of this year, Adams announced the appointment of a new climate leadership team that will focus on environmental justice and environmental protection across New York City. He said about the team, “This past year alone, we have experienced extreme weather anomalies and rising sea levels, which have endangered New Yorkers’ lives, their homes, and their livelihoods. The remnants of these different calamities are still being repaired to this day, but my administration is committed to transforming the city’s quality of life and fighting for environmental justice for all New Yorkers, and this team is exactly who will get the job done for New Yorkers.”

At this year’s New York fashion week, Eric Adams revealed that hundreds of jobs will be created sustainably, stating, “Slow Factory’s opening at the garment hub in Sunset Park will help create hundreds of fashion jobs onsite and bring tens of millions of dollars of direct economic output to New York City. Additionally, in New York, we are leading the way and showing that prioritizing sustainability can go hand-in-hand with the fashion industry.”

Curbing the environmental impact of the fast fashion industry should be the highest priority of any elected official. “The fashion industry is currently responsible for more annual carbon emissions than all international flights and maritime shipping combined,” a 2020 report by Princeton university explains. “If the industry maintains its course, an increase of 50% in greenhouse gas emissions is expected within a decade.”

Will the Animals Get the Attention they Deserve?

In light of Adams’ passionate vegan reforms, animal welfare is receiving a boost under the new mayor. So far, no direct measures toward animal welfare have been announced beyond food policies. And while his past campaigns and rallies are certainly promising, animal rights groups have observed some of his actions to be paradoxical.

also, in the animal rights section we speak of controversies but can we also add positive things he may have championed?

Eric Adams is a fervent advocate for pet adoption and has supported a 100 USD tax credit for any New Yorker who’d adopt a pet. In 2017, he’d hosted the first Brooklyn Animal Rescue Summit and announced that wild and exotic animals had been banned from circuses in New York City.

It's official. Wild and exotic animals will be banned from circuses in New York City. pic.twitter.com/Ha85wZAxGI

In 2010, he led a rally against the infamous adult and baby geese slaughter in Prospect Park, stating that “the relationship between a mother and child is not unique to human beings. These are babies, no matter what term we use for them.”

Despite his efforts in furthering the cause for animal welfare, Adams’ actions toward certain types of animals have been questioned. In 2019, he caused outrage among animal rights activists when he set up rat traps in Brooklyn’s black communities that lured and drowned the creatures and subsequently posed for photos with the rats’ corpses.

He defended his actions stating that the lives of children are more valuable than those of rats, explaining that “there are people who don’t want to go into their homes. There are rats coming through our stoves, coming through our toilets. Families are traumatized.” Matt Dominguez, political adviser at Voters for Animal Rights, did not believe the ends justified the means and quipped, “Don’t torture animals and don’t sadistically carry their bodies out to the press and display them as trophies.”

In 2021, animal rights groups sought a carriage ban in New York after a horse had been forced to work despite its injuries and poor physical condition. Eric Adams, who was a mayoral candidate at the time and had secured the endorsement of the Transportation Workers Union, did not support the carriage ban, although he did mention he was prepared to discuss the issue.

Earlier this year, Adams, a self-proclaimed vegan, had been called out for eating fish. He has since replied that he accepts that he is “perfectly imperfect,” which media platforms such as Vox Media have leveraged as a call for more “nuanced food politics.” While a “less perfect vegan” could lower the threshold for some skeptics into taking some steps toward a more ethical diet, consuming sentient beings such as fish does go against a statement Adams had made in December of 2021,

“I started to see that when you’re eating the soul of a living being, you are also internalizing all the trauma. I just knew I didn’t want to be part of that traumatization.”

“In his early days as mayor, Eric Adams has already shown resolve in maintaining his public health, food, and environmental policies,” says Preeta Sinha, Founder of One Green Planet. And while no direct actions have been taken for animals in these past few months, “Adams’ record of animal rights advocacy, despite the occasional controversy, is cause for optimism,” she added, confidently.

Sign this petition to keep plant-based federal dietary guidelines, for our health and the Earth’s