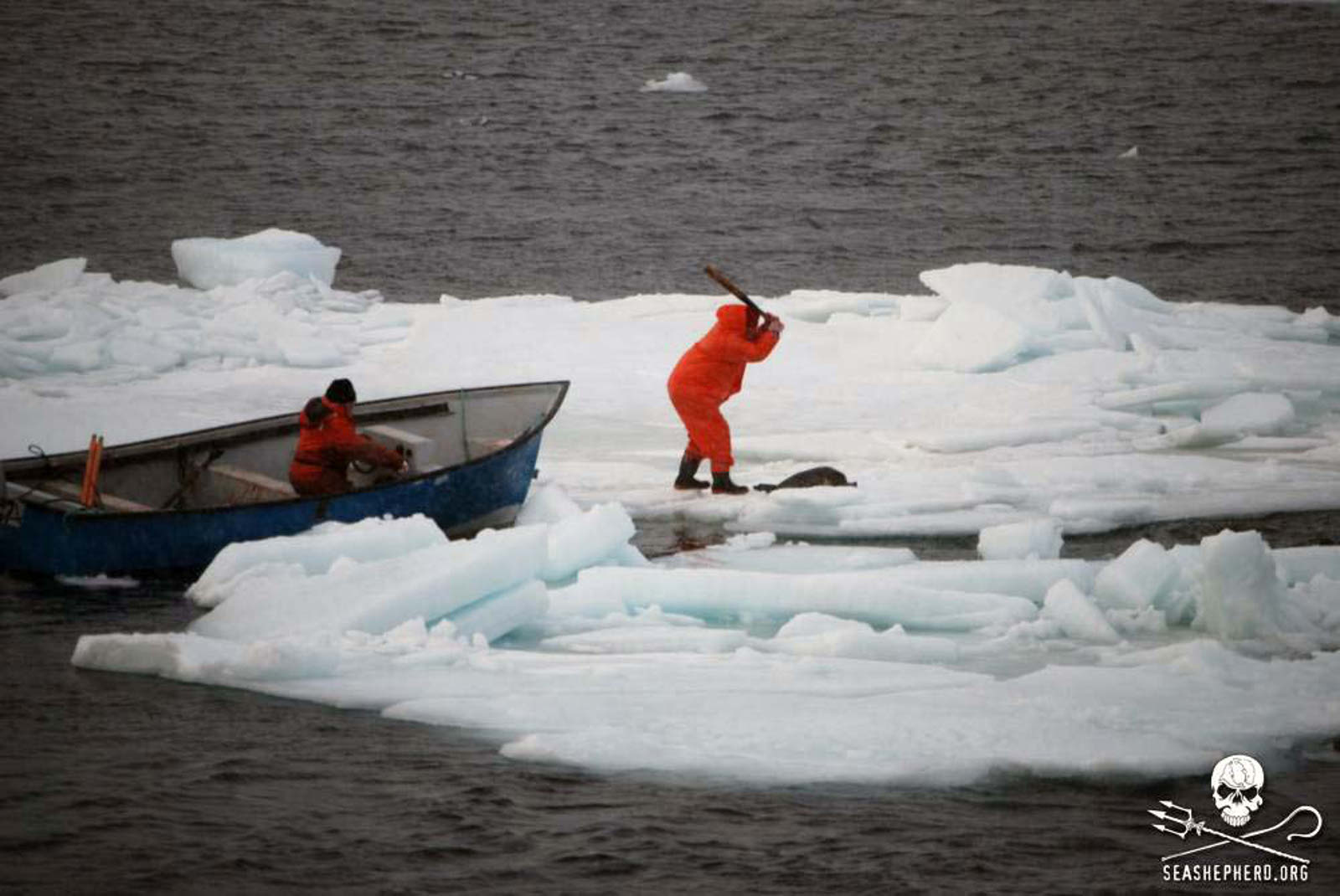 For many years, I have been annoyed at some of the terminology used in our societies in reference to our brutal treatment of animals. We need to put an end to the utilitarian, consumeristic jargon that is employed to justify ecological exploitation and the infliction of cruelty upon nonhuman species.

The first word that needs to go is the word “harvest,” when used in reference to the killing of animals.

You don’t “harvest” seals, pigs, dolphins, deer, fish or any other animal. That use of the word is senseless. You harvest corn, oranges, or apples but not seals or fish. I notice that even farmers don’t use the term for the killing of cows or pigs; they slaughter cows and pigs, they don’t harvest them. So, why the use of this word to refer to the killing of seals and dolphins? It’s just another attempt by those who kill them to remove the ugliness of their actions from the language and to justify their crimes with denial.

The Canadian government has even tried to label baby seals as adults by defining an adult as any seal over three weeks of age. It seems to me that any seal that can’t swim, can’t escape, and is helpless on an ice floe at three weeks of age qualifies as a baby seal.

And it is not a seal hunt. Clubbing helpless baby seals in a seal nursery is not hunting; it’s a cruel and horrific massacre of helpless and innocent creatures.

The word “sustainable.” This gem was dreamed up by the whale-killing former Prime Minister of Norway, Gro Harlem Bruntland. She was all for conservation, as long as it took place outside the borders of Norway and did not involve Norwegian fishing vessels.

This word “sustainable” popped up around the time of the U.N. Conference on the Environment and Development in 1992.

What does it mean? After you strip away the spin and the green-washing, it simply means “business as usual.”

For example, there is a great deal of talk about the value of “sustainable fisheries.” I can’t think of many fisheries that are actually “sustainable.” Practically every commercial fishery in the world is in a state of commercial collapse, yet you can still find “sustainably fished” cod or tuna (at least it says so on the label).

In a world of seven and a half billion people, words like “sustainable” mean very little. Just think, if every person on Earth ate one fish per week, it would add up to seven and a half billion fish per week or 390 billion fish per year. The oceans would not endure this. So what is happening is that fish are becoming more expensive, and only wealthy nations can afford to eat fish. Giant factory ships are sent from Europe and Japan to the coasts of Africa and India to plunder fish that Africans and Indians need for survival. There are more than one million fishing vessels operating every day on the world’s oceans, taking tens of millions of tons of fish each week. How does the word “sustainable” even remotely fit into the reality of worldwide industrial fishing?

The ecological reality is that all industrialized fishing should be prohibited immediately if we are to protect oceanic ecosystems. There are simply not enough fish in all the world’s oceans to meet the demand of expanding human populations. When demand far outweighs supply, the word “sustainable” is meaningless.

Another word used these days is “stocks.” This word makes it sound like the ocean is our private warehouse. We use terms in fisheries like “managing the stocks,” or the “stocks have been reduced,” or the “stocks are healthy.”

It makes it sound like it’s all neat and handy, and like the fish is already on the grocery shelf. The correct term should be “populations.”

When you put the three above-mentioned words together, you get the “sustainable harvesting of stocks” of fish. Talk about separating ourselves from nature.

Sometimes the word “fish” is replaced by the word “product.”

“Yes sir, we caught a million cans of product this season, all canned up and ready to go to market, sustainably, and humanely harvested, of course.”

Which bring us to the term “humane,” as in “humane killing.”

The word “humane” is always used in the context of justifying the slaughter of an animal. It is the ethically correct substitute word for “cruel.”

Humans wipe out 90 million sharks a year, many times slicing off their fins and tossing them back alive into the sea. This is described as “humane,” just as the killing of any animal is always described as humane.

We humans really believe we are a kind species. We justify our cruelty and declare ourselves humane. For example, if men with clubs go walking through the streets kicking and clubbing kittens, the media and the public would be outraged. In fact we are angered beyond measure, and rightfully so, when the Chinese authorities conduct mass seizures and slaughters of dogs; yet many of these same outraged people seem to think it is perfectly alright to kick, club and skin baby seals alive or to cut the throats of sheep and goats.

When marketing we use the term “free-range chickens.” The image created is of chickens happily walking around and pecking for insects on the ground. The reality is that the chickens get to leave their cage at some point before they are beheaded and turned into “wings.”

“Homo Hypocriticus” or “Hypocritical Primate” are names that would best describe our human species. We call ourselves “Homo sapien,” which means “intelligent man,” but just simply calling ourselves this does not make it so.

Thus, we have the absurd description of the Canadian seal hunt or the Japanese dolphin slaughter as “humane and sustainable harvesting of stocks of seals/dolphins.”

By simply using the word “humane,” we can accept that an animal being bludgeoned on the head with a spiked club is kind of okay because it is described as “humane.”

Imagine the outrage if animal shelters put down dogs and cats using a club instead of a lethal injection. Of course, we avoid the word “kill” in the shelters too, by saying we put the poor animals to “sleep.” It sounds much nicer. Lethal injection is considered more humane than clubbing, yet the end result is still death.

We always hear that Faroese whale killers “humanely saw through the neck of a pilot whale to sever the spinal cord.” It takes a few minutes but the Danish government has said that the slaughter of pilot whales is a humane, sustainable harvest of wild pilot whale stocks.

And the poor little Minke whale has been insulted with the moniker of a notorious Norwegian whaler by the name of Captain Meincke, a sadistic character who liked to kill whales. I would prefer to have the whale named after someone who likes whales or defends whales instead of some serial murderer of whales. I call this whale the “Piked whale.”

And why is it that you can’t describe an animal killer as a “murderer?”

Webster’s dictionary defines “murder” as the killing of another human being, but it also says that to kill or slaughter inhumanely or barbarously is murder too.

In the Faroe Islands they call the killing of the pilot whales the “Grindadráp.” The word “grind” means whale and the word “drap” is Nordic for murder.

I think that “murder” is an acceptable term for describing the barbarous slaughter of a seal or the inhumane killing of a dolphin, a whale or an elephant.

Humans just like to pretty things up to deny responsibility in the willful taking of life.

Dr. Walter Palmer claims that his “take” of Cecil the lion was legal and humane. “Take” is another word used in place of the word “kill.” It sounds nicer.

I also find it interesting how some people who eat meat like to describe themselves as “meat eaters.” Some even say they are “carnivores.” A real carnivore would have a laugh over this self-aggrandizing description. Human beings are not meat eaters. Carnivores hunt down, pounce upon, and rip the flesh from the body of their living prey, with veins in their teeth, blood on their face and the stench of slaughter in their nostrils.

Now, I admit there are a few strange, perverse people who eat live monkey brains and living, squirming eels, but the average human does not eat living flesh. In fact, the average non-vegetarian human is a carrion eater; they eat dead flesh. The correct term is not “carnivore” but “necrivore.”

Sometimes the flesh they eat has been dead for weeks or even years, but it looks red and fresh thanks to chemicals, bleach, and dyes.

Humans are closer to vultures, hyenas, and jackals than to the lions, tigers, and wolves they try to emulate.

We don’t have a logging industry anymore; they now call it “silviculture.” It goes along with the Healthy Forest Initiative, where a “healthy” forest is a forest that is harvested – humanely, and sustainably, of course. The loggers are now “forest nurturers” who farm and harvest the forests for the benefit of future generations.

And finally, the word “conservative.”

As a conservationist, I’ve always viewed myself as a “conservative,” but now I find that the right-wing, radical, wacko anti-conservationists who destroy forests, overfish the oceans, and pollute our rivers are now calling themselves “conservative” and accusing me of being a radical for working to conserve nature and endangered species.

I think it is clear that we have a serious language pollution problem.