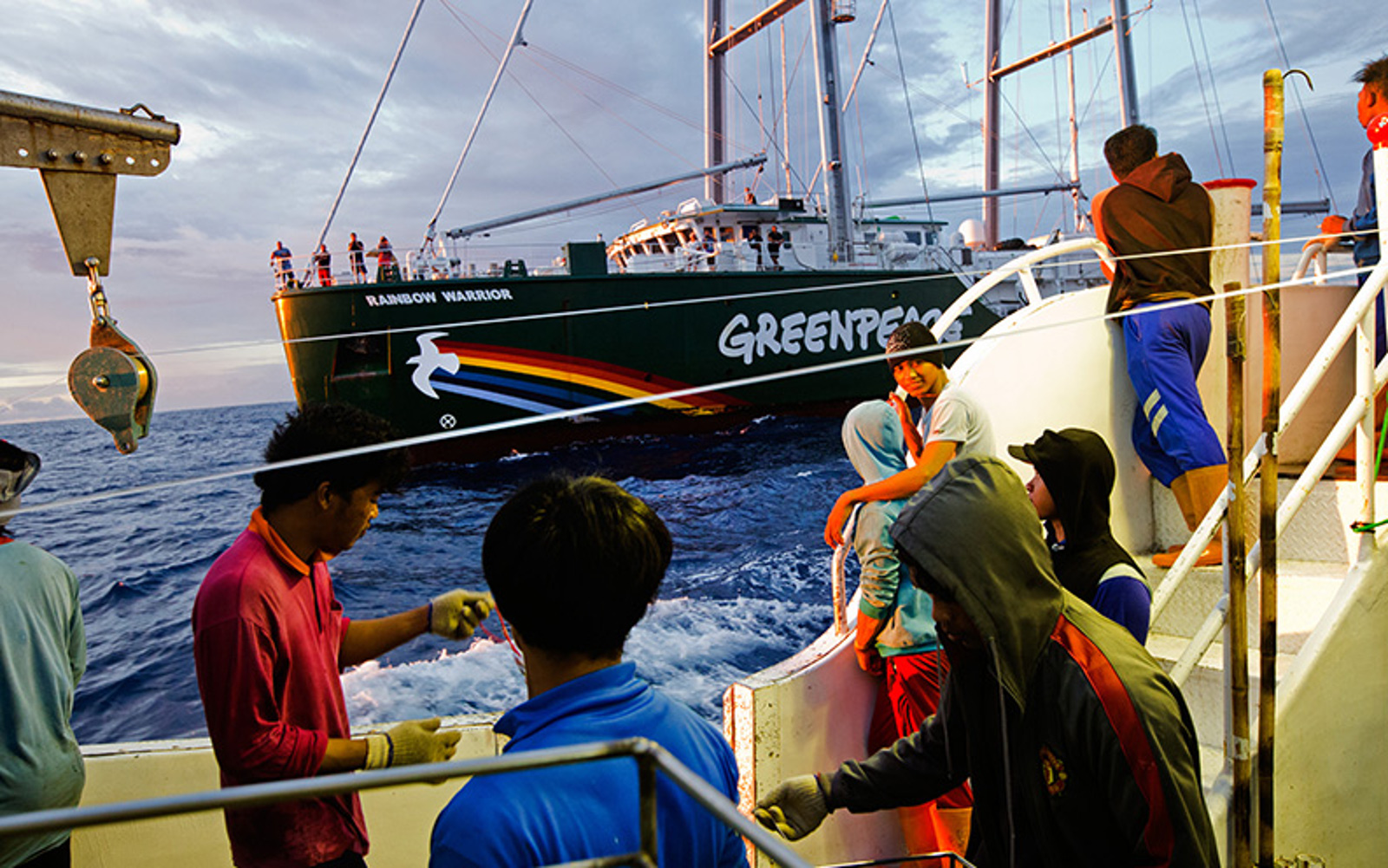 We were in the high seas of the Pacific, at least two days away, but when our checks came back from the Western and Central Pacific Fisheries Commission (WCPFC) and the Pacific Islands Forum Fisheries Agency confirming nothing matching the ship’s name or radio call sign was on their list of vessels authorized to fish in these water, we made a beeline for it.

By the time we got close, it had already deployed 50 miles of line weighed down by 2,000 hooks, and was ready to start hauling in tuna and any other sea creature caught up in the process. The boat Shuen De Ching No. 888 is a brand new 24-metre longline vessel on its maiden voyage in the Pacific. It has a crew of 15 – hard to fathom for such a tiny boat – but it’s clean and tidy. At least on the face of it.

Dig a little deeper, and this boat represents everything we’re out here for on our voyage around the Pacific tropical tuna grounds to investigate and expose out of control fishing practices.

As we pull alongside the longliner, we decide there’s nothing to lose in asking permission to board it, even if it’s unlikely to be granted given that it doesn’t have a fishing license in these waters. But, to everyone’s surprise, the captain agrees.

Ten minutes later and we’ve got two inflatables out in the choppy seas, heading straight for Shuen De Ching No. 888. 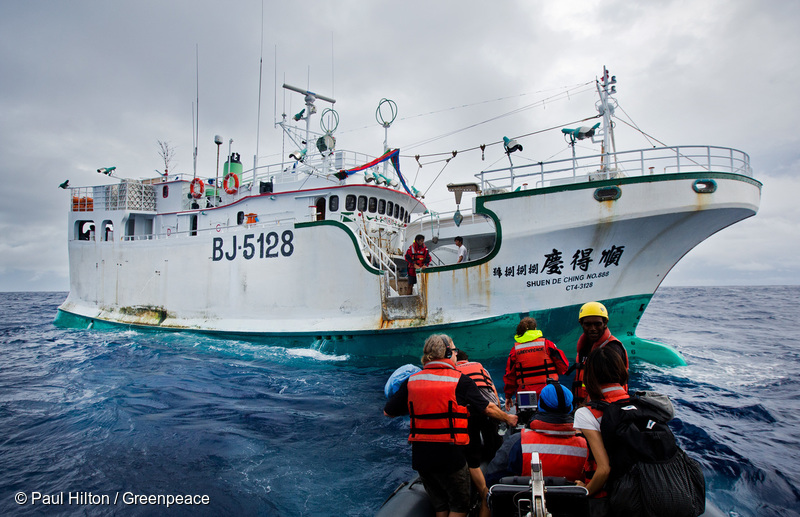 The nine people in our boarding team are helped onto the boat by the longliner crew, and three of them head for the bridge to speak to the captain.

“It was all a bit strange really,” recounts Ric Carlson. “He acted like he didn’t have a clue about fishing – where to fish, how to fish, how many fish they had on board, how many freezers they had to keep the fish in. It was suspicious straight away.”

The first red flag is raised after an analysis of the captain’s log book. This is the official book he’s required to fill in daily and to present to fishing authorities when required.

The log claims the boat has only caught three tonnes of fish over a two month period, a highly unlikely scenario. As our Taiwanese oceans campaigner Yen Ning puts it: “Even a fisherman with no experience would still pull up at least half a tonne of catch every time they set these sorts of lines. And longliners set them out daily.”

When grilled about such a low catch rate, the captain’s nonchalant response is that he’s not a very good fisherman, and he’s had particularly bad luck out here in the Pacific.

It’s definitely fishy, so we head down to the boat’s freezers under the bridge to find out what the real deal is. 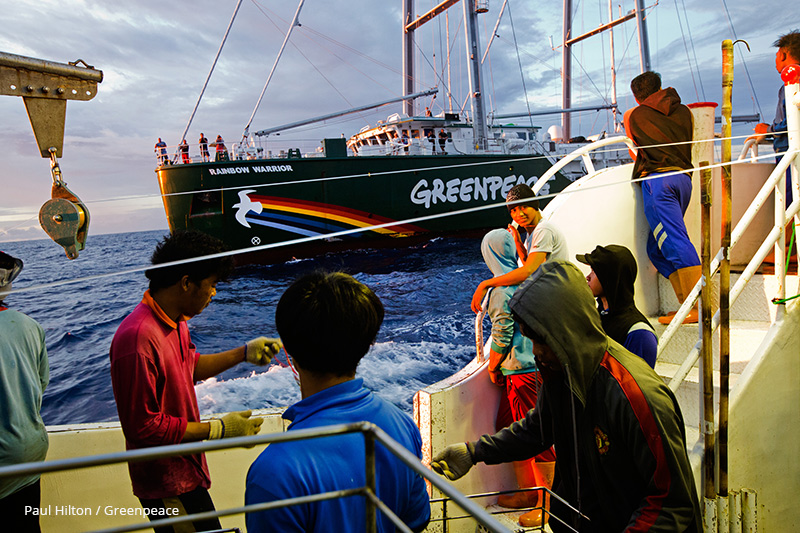 It’s methodical work. We take the frozen fish out piece-by-piece, placing them on the scales and carefully recording their weight to see if it matches up to the log book.

The diversity of species found on board includes marlin, mahi mahi, sailfish, sharks, and tuna. It becomes immediately clear that the amount of fish reported in the log book is drastically different to the reality – there is far more catch than the “official” record would have you believe.

But things are about to get even dirtier. After close to two hours inspecting the freezers, there is only one door left to open. 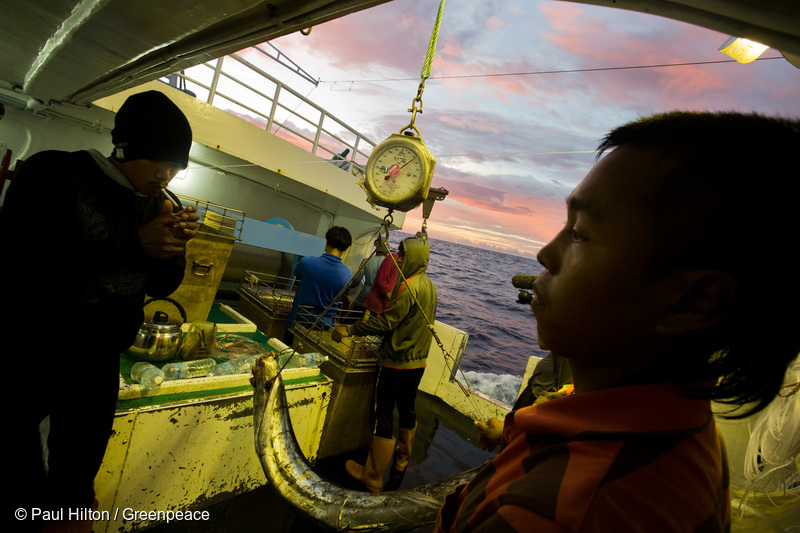 “They voluntarily opened all the doors for us apart from one they’d just kind of avoided and blocked it with a hatch cover as if we wouldn’t notice it,” says Ric. “So of course, that makes us even keener to check out what’s in there.”

And out it comes, sack by sack, the boat’s dirty little secret: Shark fins. More than 75 kilograms in total, sliced from the bodies of at least 42 sharks.

Under Taiwanese law and Pacific fishing rules, shark fins may not exceed five percent of the weight of the shark catch, and with only nine shark carcasses found on board and only three reported in the log book, Shuen De Ching No. 888 is in big trouble.

In many past cases we’ve seen from illegal shark finning activities, the poor creatures are actually still alive when their fins are cut, before they are thrown back overboard to die painfully.

The shark fin trade is a large driver behind the slaughter of over 100 million sharks every year. 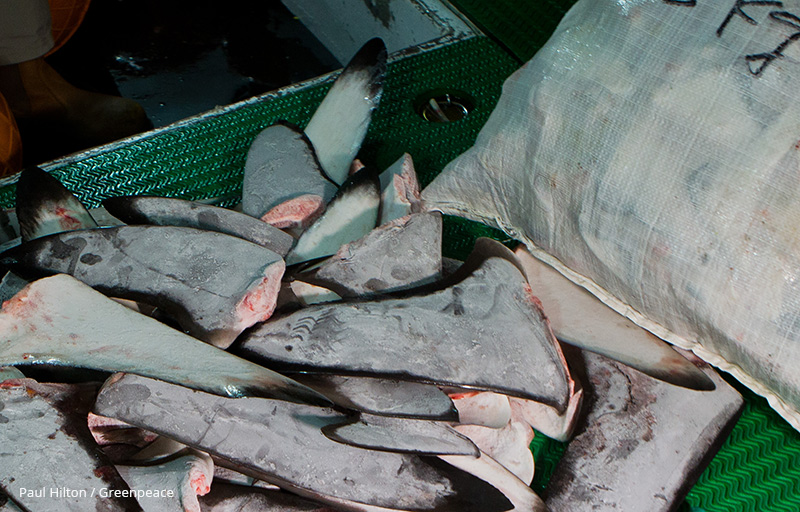 As the Greenpeace team prepares to disembark the longliner, it advises the captain of what he should expect to happen next.

The fact that the boat doesn’t have a license to be fishing here has already been reported to the Western and Central Pacific Fisheries Commission and to countries neighboring the high seas pocket, and investigations are underway.

When we reported the boat to the Western and Central Pacific Fisheries Commission, we were initially informed that is was not on the list of authorised fishing vessels in the region, which makes it illegal under international law. So we reported it to Taiwan’s Fisheries Agency, who are now working with the WCPFC to resolve the problem after uncovering administrative errors that meant their registration had not been confirmed and it had been fishing for months without proper monitoring.

Authorization aside, authorities should now act on the strong evidence Greenpeace provided, that the vessel’s log book was inconsistent with the catch in its holds, that there was evidence of illegal shark finning, and that the captain admitted he had transshipped part of the catch, which is illegal without first notifying the WCPFC.

We will now pressure on the Taiwanese Government to order the vessel to stop fishing and return to port immediately for a full and transparent inquiry.

Prosecutions could be imminent. The captain of Shuen De Ching No. 888 looks resigned to what he’s been told. He promises to try and improve his fishing practices.

We still don’t quite understand why he allowed us to board the boat. Perhaps he thought we wouldn’t be as thorough as we were, or that it was just easier to let us on than to deny us.

But it’s too late for all the ocean creatures, and we’ll never know their exact numbers, that have been killed by his pirate operation.

The Shuen De Ching No. 888 is just the tip of the iceberg. The true extent of the Pacific tuna plunder remains hidden by vessels like this one, operating hundreds of miles from shore.

We wish the Fisheries Agency a swift and successful investigation. One thing that should be watched is whether the Shuen De Ching No.888 will attempt to rendezvous with another ship and secretly transfer shark fins.