Why Obstruction Is Justice in the Australian Shark Cull

I once joined a team in Mexico to assist in the unhooking of blue sharks from long lines. It was there I witnessed protected species, even dolphins, being chopped up and used to bait for sharks. The beaches where the fishermen lived in tents with no water and no power acted as their processing factory with shark meat and fins on display. Covering the beach, spilling from the large sharks that were cut open, were hundreds of shark pups, a tragic and unnecessary end to the next generation.

This is the kind of cruelty and insanity towards fishing practices you expect in a place like Mexico, but it seems I was too harsh on that country, because what I have witnessed in our very own Australia is different in only one way, we call it legal, and our government stands behind it.

The Roots of the Shark Cull

My name is Madison Stewart, I’m an underwater cinematographer. I’ve been diving with sharks since I was 12 years old, an unusual hobby forged by unusual parents. 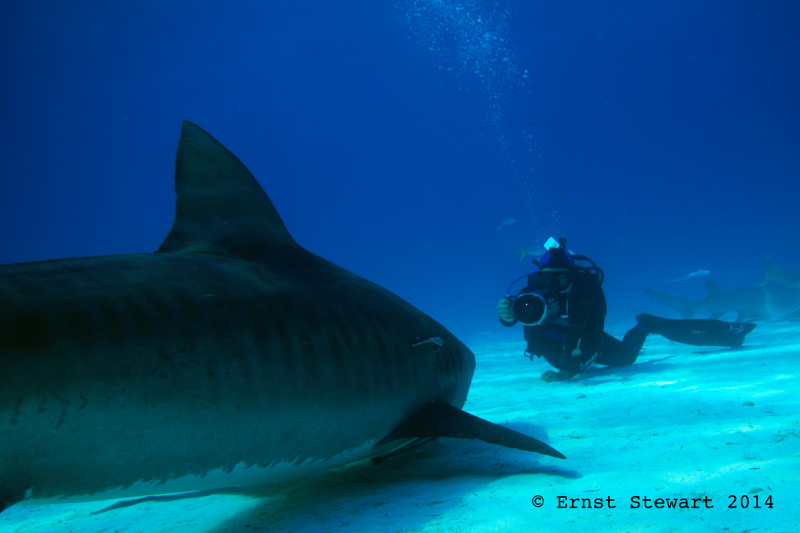 Based in Brisbane, I went to Western Australia to assist in documenting the sharks caught and killed in the shark cull. A $6.85 million plan to see lifesavers kitted out with more PWCs, more choppers, and a tag and release function, so sharks posing a potential threat can be tracked, caught, and destroyed has been established in Western Australia. It comes after an influx of shark attacks in a small period of time.

Cold upwellings of water along our coast, dead whales, the cleaning and dumping practices of live export ships — all potential factors of shark attacks in a small period of time, all ignored by both government and people, as fear speaks louder than fact.

To this day, they have captured over 100 sharks: they are targeting great whites, bull sharks, and tigers – most of the sharks caught are tigers, tigers have not been responsible for an attack in these areas for more than 80 years. On more then one occasion, great whites have been spotted in the vicinity of swimmers by fisheries, no attacks occurred on all these occasions.

In one case, government officials set five drum lines at random to catch a group of great whites, the closest one was less than 100 meters offshore where people were swimming at the time. On all occasions, the great whites swam past the drum lines. The kind of action and negligence you do not expect to witness in our waters.

Fisheries are merely puppets playing out the government plans. Being the department that handles the drum lines and sharks off Perth’s main beaches, they too are now faced with the consequences of the cull. It is safe to say they did not join fisheries to kill beautiful fish, that is now their focus. 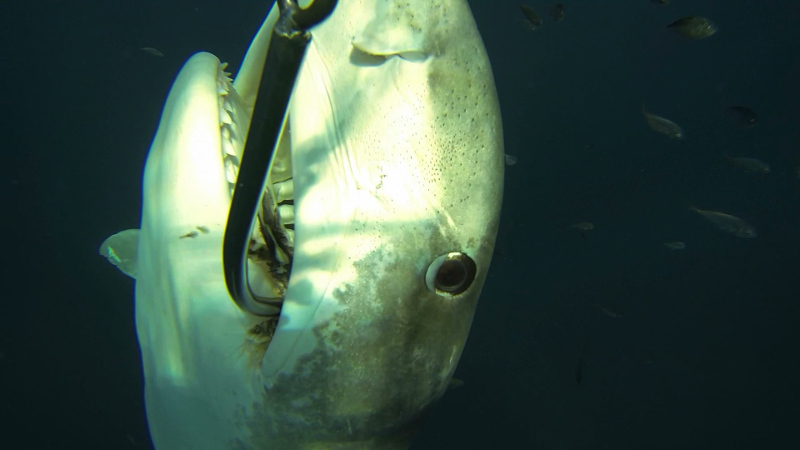 An Inside Look at the Matter

My job, as one of the few people to have previous experience in the water with tiger sharks, was to get in and film the victims. The first one I filmed looked dead, but when taken out of the water, she started to move, that’s when I witnessed a fisherman, paid close to seven thousand dollars a day by fisheries, shoot her in the head with a 22 rifle.

I spent weeks over there, with many other amazing individuals on boats funded by an alliance of conservation organizations. We follow fisheries, we document mistakes, we photograph their every move, and in return, they photograph us. No one made plans with the intention to break the law, but one day in a split second, we pushed the boundaries and quickly learnt that our place on the water with fisheries was not a peaceful one.

It was March 20th and the daily operation of observation and documenting continued. Fisheries took a large female tiger shark off a hook and went to dump her carcass at sea, the usual practice. Following them as we always do, we jumped in the water to film her fall. 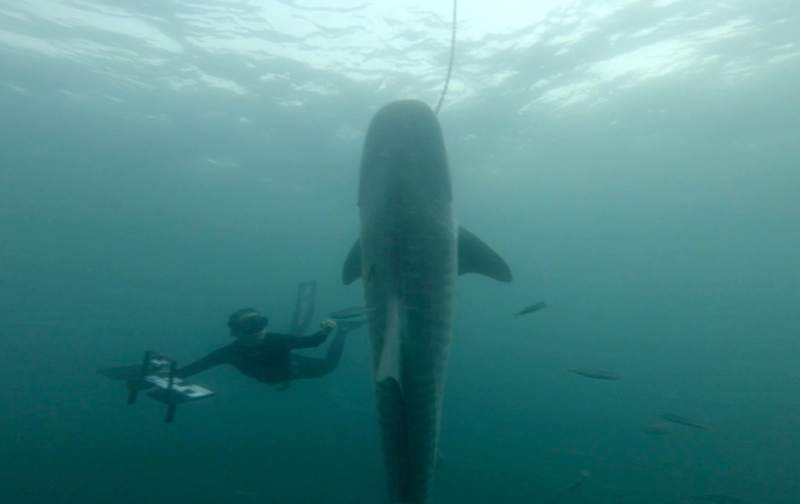 Unknown to us, a member of the other boat with us on the water that day had a rope in his hand, he caught the shark, and brought it back to his boat. After less than 5 minutes, he let the shark go and it sank to the ocean floor, but in that time, we all acted as a tight team to document her from in and out of the water. 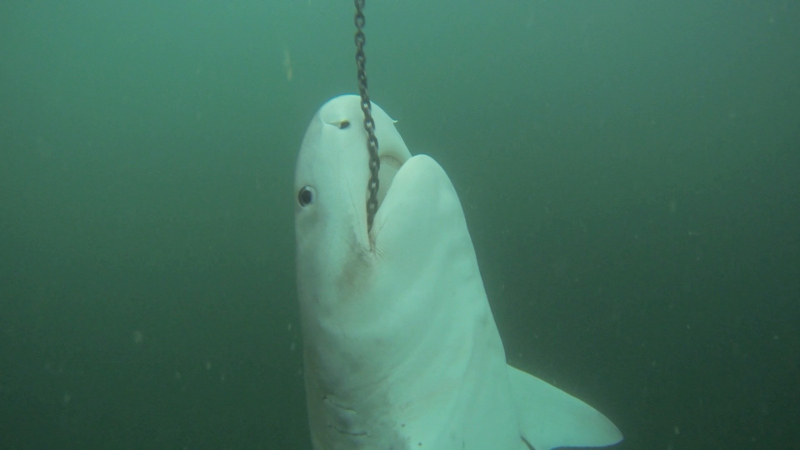 I was less than a meter away from a huge, dead tiger shark, her eyes still open, a chain still lodged in her mouth. While the shark was next to our boat, fisheries saw what we did, and turned around and charged us. In a scene similar to the whaling fleet attacking Sea Shepherd vessels in Antarctica, their huge boat dwarfed our small rib.

They came towards us with great speed. We had two divers in the water (myself included) and an idle engine, nevertheless they came within meters of us. This is against maritime law. 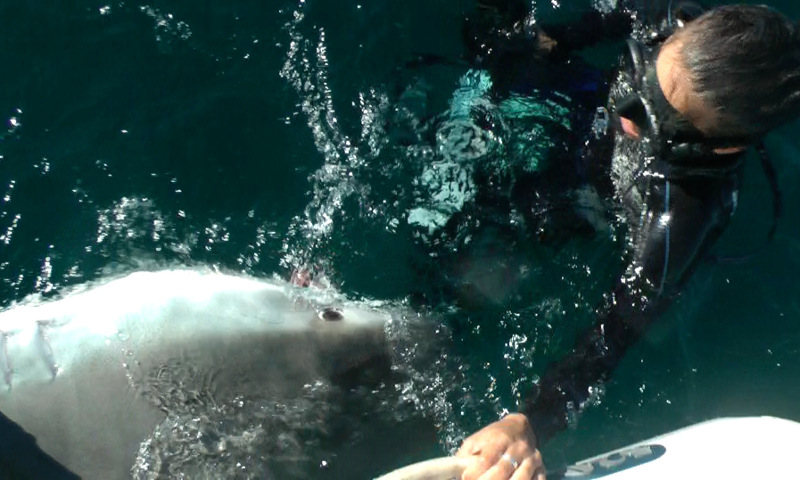 They yelled at us to “release the shark,” telling us we were “interfering with their fishing operations.” I could hear yelling between the boats, followed by the fisheries officer saying “get the cameras” – this is when they started taking photos of us. We were too focused on the shark to heed their instructions.

When we got back to shore, fisheries officers were waiting for us, they attempted to seize our memory cards and obtain and destroy all our footage. Our memory cards were long gone and we didn’t know where, safe with another member of our operation onshore, a standard practice.

They wanted to charge us with “possession of a protected species,”– they were referring to the shark they had just killed. Tiger sharks are in fact not a protected species, only members of their species after a certain size are protected. They also made very sure I understood, that if I was to release any of my footage from that day, I would be going to court for obstruction of justice.

I’ve never had anyone, let alone authorities, come after me on a criminal level for what I am known for, my underwater footage of sharks.

What the Future Holds for Sharks

Australia is home to some of the last wild oceans on this planet, our government will happily see that come to an end. This is my take on the Western Australian shark cull, and the archaic revenge theme that sets its foundation.

The motto of Western Australian fisheries is ‘fish for the future,’ something they will ensure is not possible for tiger sharks, with many of the large females being killed at breeding size.

This cull started without first going through parliament, and had somehow made its way into our oceans for three months, ending April 30, when the drum lines were set to be removed. The government however is now attempting to extend that time and have the drum lines in place for many more months of the year.

It must be embarrassing to them that they have not yet caught a single shark species implicated with those attacks, and even if they did, it would be unlikely to be that particular member of this migratory species.

We are living in the presence of great injustice, where a mere separation of knowledge from the public towards sharks is allowing their decimation in our waters – in ways that would be illegal on animal cruelty grounds if happening to any other animal. Snakes kill more people each year than sharks do, yet snakes, are fully protected. We learn at school the procedures for deadly snakes, why do we not learn the simple procedures for sharing the oceans with sharks?

Because there is a skill to it, and there is nothing wrong with wanting to protect ourselves in the water, we cannot ignore that this is something the public wants, nor can we ignore that a shark cull, is not the way to do it.

You can help see the Western Australia shark cull end for good by signing this petition.