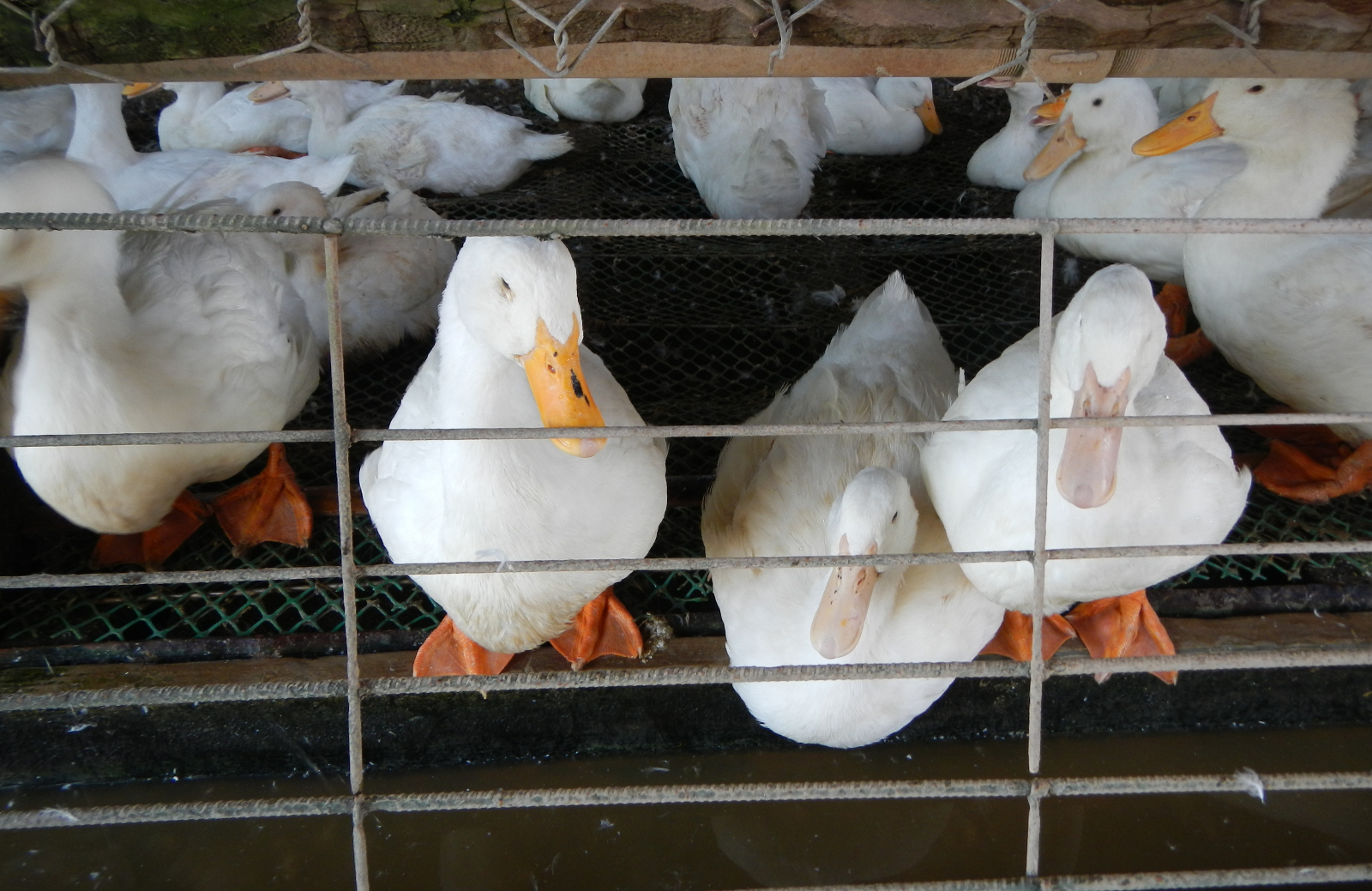 The vast majority of animal products consumed in the United States come from animals raised in factory farms. While food labels and packaging would have us believe otherwise, boasting terms like “free-range” and “all-natural,” the reality is that 99 percent of chicken, 95 percent of pigs and 78 percent of cows come from factory farms. Known as Concentrated Animal Feeding Operations, these facilities are about as animal friendly as they sound. In order to produce the most meat, eggs, or dairy as possible from the billions of animals who sadly find themselves in this industry, factory farms cram thousands of animals into a single facility with horrible conditions.

Lucky for consumers, there are some brave individuals who have made it their life’s mission to expose the fraud of the animal agriculture industry and show people where their food really comes from. Yes, we’re talking about whistleblowers.

Mercy for Animals (MFA) is an organization known for their undercover work at factory farms. Many investigations carried out by MFA have lead to arrests and reforms at factory farms. Being an undercover investigator is certainly not a job for the faint of heart. But in the end, being able to show the world what goes on behind the closed doors of a factory farm, and save thousands of animals in the process makes it all worth it

Recently, One Green Planet was given insight into what the experience of going undercover at a factory farm is like by one of Mercy for Animal’s investigators. For the sake of anonymity, the investigator’s identity will not be revealed. For this particular assignment, the investigator went undercover at Reichardt Duck Farm in Petaluma, California, the largest duck farm in the United States. After being hired as a barn cleaner, the investigator was wired with a pinhole hidden camera and sent to work.

“I did my job exactly as instructed by my supervisor, and then simply used a hidden camera to document the horrific conditions I witnessed while there.“

While this might sound like a rather easy task to accomplish, the scene that the investigator witnessed at Reichardt’s is not easily forgotten.

“[While working at the farm I] documented a disturbing pattern of animal abuse and cruel neglect, including baby ducklings having the tips of their beaks burned with red-hot metal and birds painfully trapped in the wire cage flooring left to slowly suffer and die,” begins the investigator, “From the day they hatch until they are violently killed at the slaughterhouse, the short lives of these ducks are filled with misery and deprivation.”

The investigator describes the experience of being inside the duck barns like living in a horror movie. The barns were old and decrepit with holes in the walls, corroding wood everywhere, and cobwebs from wall to ceiling. It is readily apparent that this facility is neither sufficient nor sanitary for producing ducks at such a large scale.

“There were tens of thousands of ducks under one roof, running around on barren wire flooring, all squawking loudly, and flapping their wings … the stench of concentrated duck manure was gag-inducing at times.”

To produce the maximum yield from the lowest number of animals possible, the ducks are pumped with feed and grow to a size unimaginable in a regular duck. Because of their rapid growth rates, the ducks were unstable and if one fell over in the midst of stampede, there’s little chance they would be righted again. The investigator explains that when they would walk through the barn, the ducks would get startled in their pens and scurry away as fast as they could. Associating humans with their suffering, it is no wonder they were eager to avoid contact.

The floors that the ducks lived on were make completely of wire, with wooden 2×4 beams for support.

“Walking through the barn was challenging, stepping only on the wooden 2×4 beams that held up the wire flooring, slippery from duck manure, being careful not to step on the wire as one could easily fall through into the manure pit, a 4 – 5 foot drop in some places.”

Ducks would easily become stuck in the wire grates, leaving them without access to food or water.

“There were ducks with their wings jammed so tightly in the wire flooring that it took me several minutes to pry them free … I found numerous ducks whose webbed feet had been impaled by the sharp, jagged edges sticking up from the damaged floor. “

On one particularly appalling occasion, the investigator came across a duck who had gotten stuck in the wire and was eaten by a raccoon, right inside the barn. Another time they witnessed a trapped duck who’s wing had been brutally broken. Despite the fact that the worker reported this injury to the supervisor, the duck was given no care and was found dead the next day. 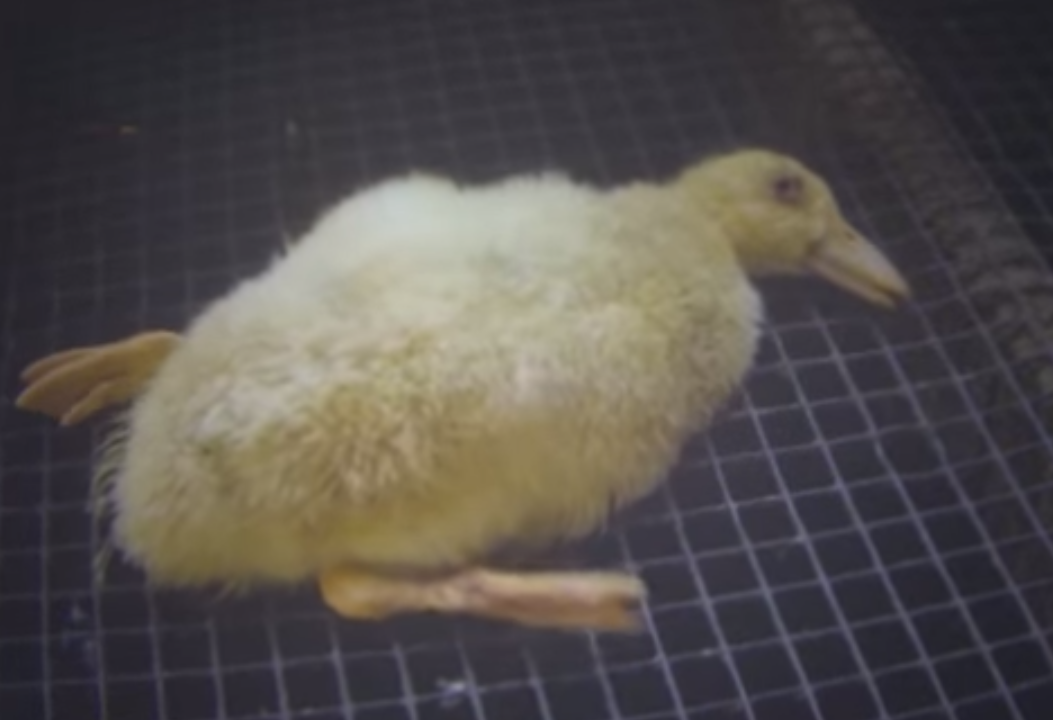 “More than 50 percent of the ducks in some barns had serious injuries or illnesses,” explains the investigator, “Most of them had wounds under their wings that would be dripping blood down their bodies. It was sickening to see just how much these ducks were suffering every day of their lives. “

But as they point out, this is not how it has to be. “Ducks are as intelligent and friendly as the dogs and cats we all know and love. Yet factory farmers are allowed to literally torture thousands ducks in ways that could warrant felony-level cruelty to animals charges in most states.”

By showing the public what goes on behind the closed doors of the “family-owned” aka “factory” farms that supply their food, we can hold these companies accountable for their gross misconduct. When companies and their workers view the animals in their possession as commodities, they are able to completely dissociate from the cruel, inhumane work that they do and carry out horrible actions against sentient beings. These industries are inherently inhumane and exploitative, but the abuse witnessed at Reichardt Duck Farm goes above and beyond any semblance of acceptable business practices.

Factory farms are exempt from many animal cruelty laws because their special brand of animal abuse is called an “industry standard.” Allowing the public to see what these standards really are empower them to decide if they really want their money to contribute to these actions. Knowing how powerful the consumer’s opinion can be, the animal agriculture industry is trying to criminalize whistleblowing rather than change their ways. A number of states in the U.S. have had “ag-gag” bills introduced to stop investigations like the one carried out at Reichardt’s. Seeing the heinous conditions that tens of thousands of ducks were allowed to live in, it is clear that the animal agriculture industry has little interest in anything but their own profits.

While these corporations might be hesitant to change their ways, that doesn’t mean that you have to be. “The most powerful choice compassionate consumers can make to protect ducks and other farmed animals from egregious cruelty is to simply stop eating them. “

Sharing the truth about factory farms and eliminating your patronage of their products is the most powerful action you can take as a consumer. At the end of the day this industry operates with the sole interest of profit, so when that runs out, things will have to change.

To watch the footage captured during this investigation, click here. We warn that the images depicted are a bit graphic.