Elephants are incredibly intelligent and emotional creatures. In the wild, they have dynamic lives and play an integral role in forming their ecosystems. Few species have the cognitive ability to recognize themselves in the mirror, but elephants have passed the test. This self-recognition demonstrates that they are able to see themselves as separate, one of the main traits underlying empathy and complex sociality.

What’s more, ever tender to their young, elephants are immensely social beings who can go for years without seeing a loved one and then immediately recognize them upon meeting again. They mourn dead members of their herds and help family members and friends survive in times of drought or crisis.

The more we learn about these self-aware animals, the harder it becomes to justify keeping them in captivity. Many are starting to learn how elephants come into captivity — whether they are captured in the wild, or bred in captivity, and in the past few years, we’ve seen how greatly the public’s perception of captivity has changed. One of the biggest changes, and potentially most influential, came from an announcement by Ringling Bros. and Barnum and Bailey Circus. For over a century the exploitation of elephants has played a crucial role in their acts but in March of this year, the circus announced it would be closing.

But while there has been some positive progress for captive elephants in recent years, there is still a long way to go. Elephants are still exploited to perform meaningless tricks for humans, and many in ways unsuspecting tourists don’t know of the immense cruelty behind the scenes. “Cute” elephants on social media can be seen painting, swaying to music, frolicking at the beach, or in unexpected places behaving in unexpected ways. Don’t ignore the “elephant in the room!” Chances are very high that this imagery was obtained because elephants were under duress, in a state of great depression, or shown purely for the amusement of tourists to earn the trainer money. This is NOT about the elephant’s “joy.”

So what are some of the unsuspecting tricks and behaviors that should you look out for? Let’s break it down.

Each year, millions of tourists flock to Thailand in the hopes of interacting with Asian elephants. Popular tourist encounters include everything from taking selfies with calves to riding on an elephant in the jungle. Tragically, these “entertaining” endeavors often lead tourists to believe that these excursions are normal and somehow acceptable. Most tourists are unaware of the abuse elephants face when in captivity but considering how endangered Asian elephants are, the facade needs to end now. Between poaching, the tourism industry, and habitat loss, both African and Asian elephants are in danger of becoming extinct within our lifetimes. 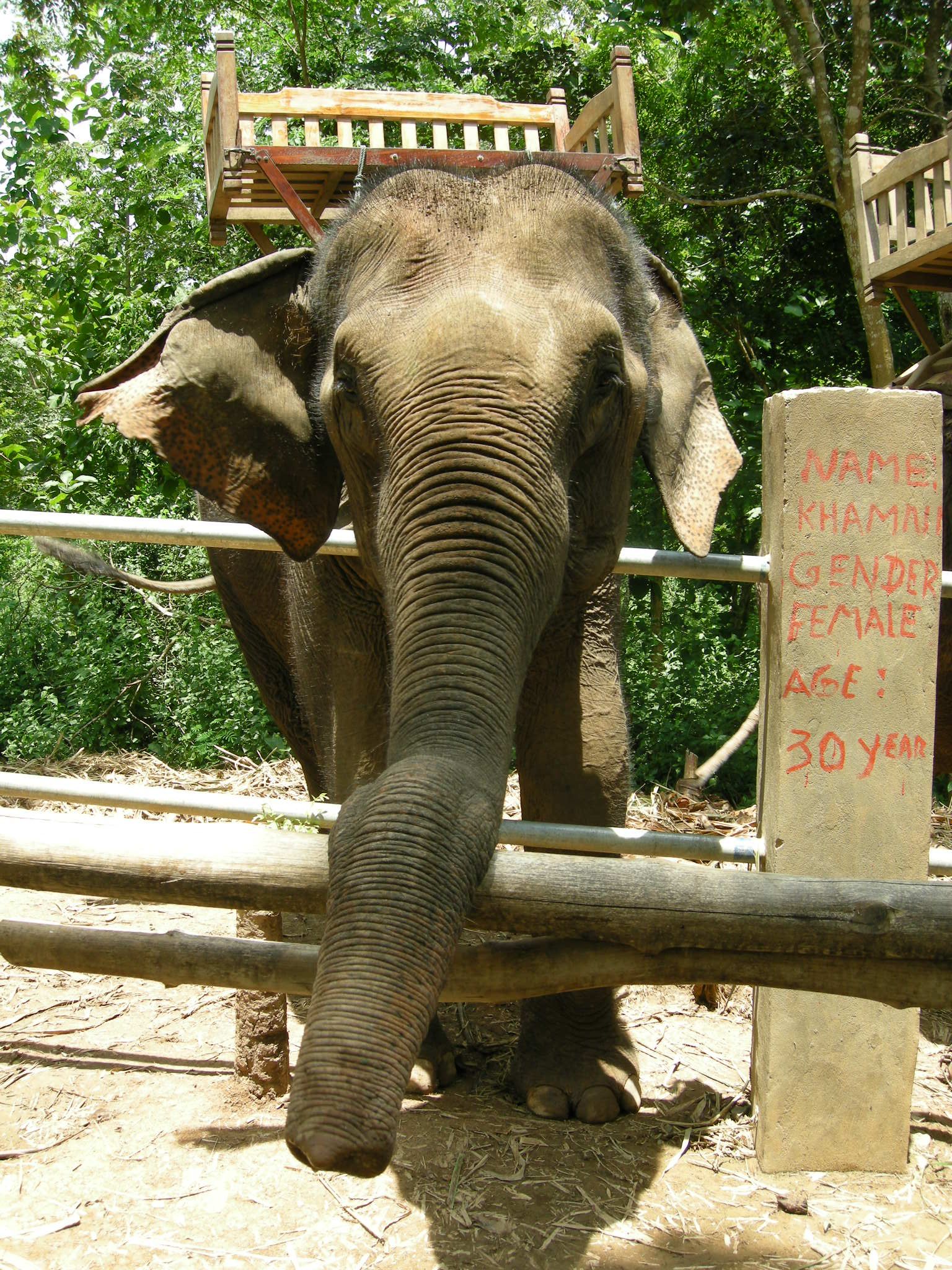 According to the National Geographic, the median lifespan of a zoo-born female is just 17 years with Asian elephants living up to 19 years in captivity and 42 in the wild. If that’s not telling, we don’t know what is – but it comes as little surprise as wild elephants form close relationships with other family members. Calves will stay with their mothers for around 16 years, but the elephant tourism business shatters this bond at the ripe age of six months. The fulfilling life these animals lead in the wild makes any captive scenario seem unbearable.

Even if the elephant seems to be performing out of their own free will, if they are doing something that they wouldn’t do in nature: fact check the behavior.

The Maesa Elephant Camp , located just outside Chiang Mai, Thailand, a Thai tourism hotspot is credited with pioneering the concept of the “artist” elephant. There are seventy-eight elephants currently “enrolled” in the camp, all of whom were purchased by the camp’s founder, Choochart Kalmapijit’s over the past thirty years. 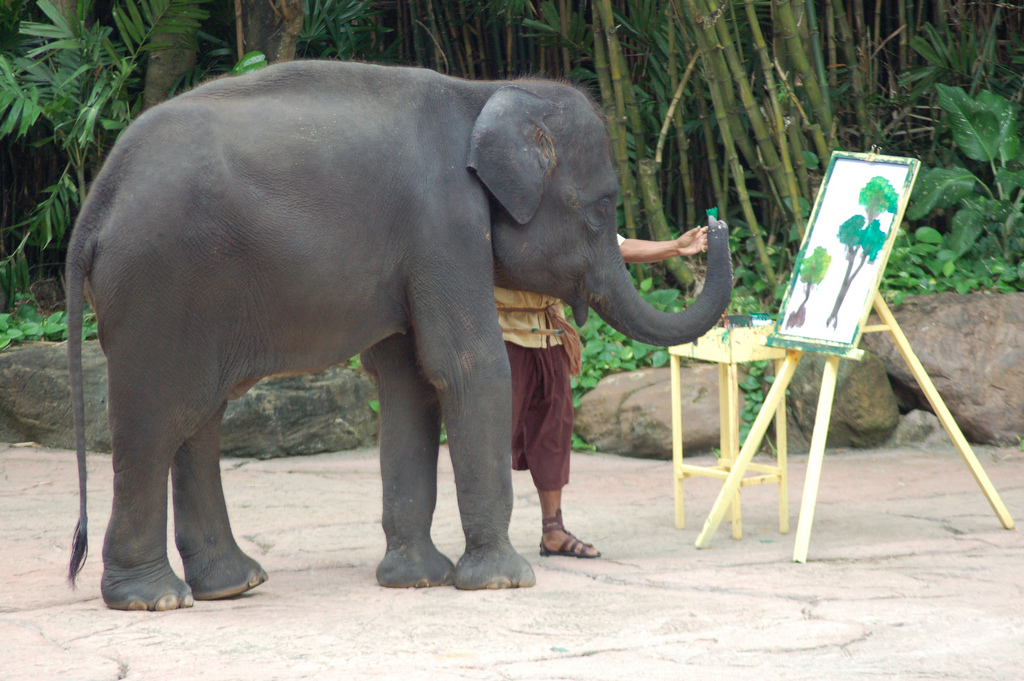 The high intelligence of elephants is often credited with their ability to learn how to paint so effortlessly. However, just as an elephant in the wild would not choose to jump into a handstand, it is not likely they ever aspired to be a Pachyderm Picasso either. One of the “skills” lauded by the elephants at Maesa Elephant Camp, of course, is the uncanny ability to paint. 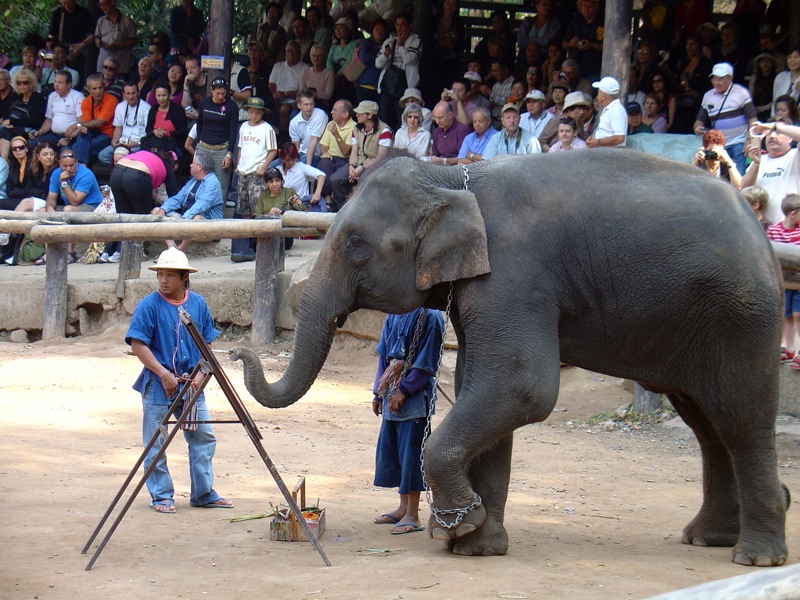 To train the elephant to move the brush to create stroke patterns that we recognize as flowers, trees, or even an elephant, the mahouts use these painful prods to guide the elephant’s movements. Further, if an elephant paints incorrectly, they are beaten, either with a bull hook or physically hit on their head or trunk.

If you see an elephant perform a behavior it would never in the wild  (i.e. twirling a hulu hoop on its nose, or bowing to an audience), that’s a red flag.

Earlier this year, at Wildlife Safari in Winston, Oregon, elephants were being forced to wash visitors cars. The safari was making the elephants fill their trunks with soapy water, spray the cars, and then sponge the cars down. This experience costs $25 per wash, but the real cost is the elephant’s freedom. We have certainly never seen an elephant wash a car in the wild, so it’s safe to say this is not a natural act for them to do. 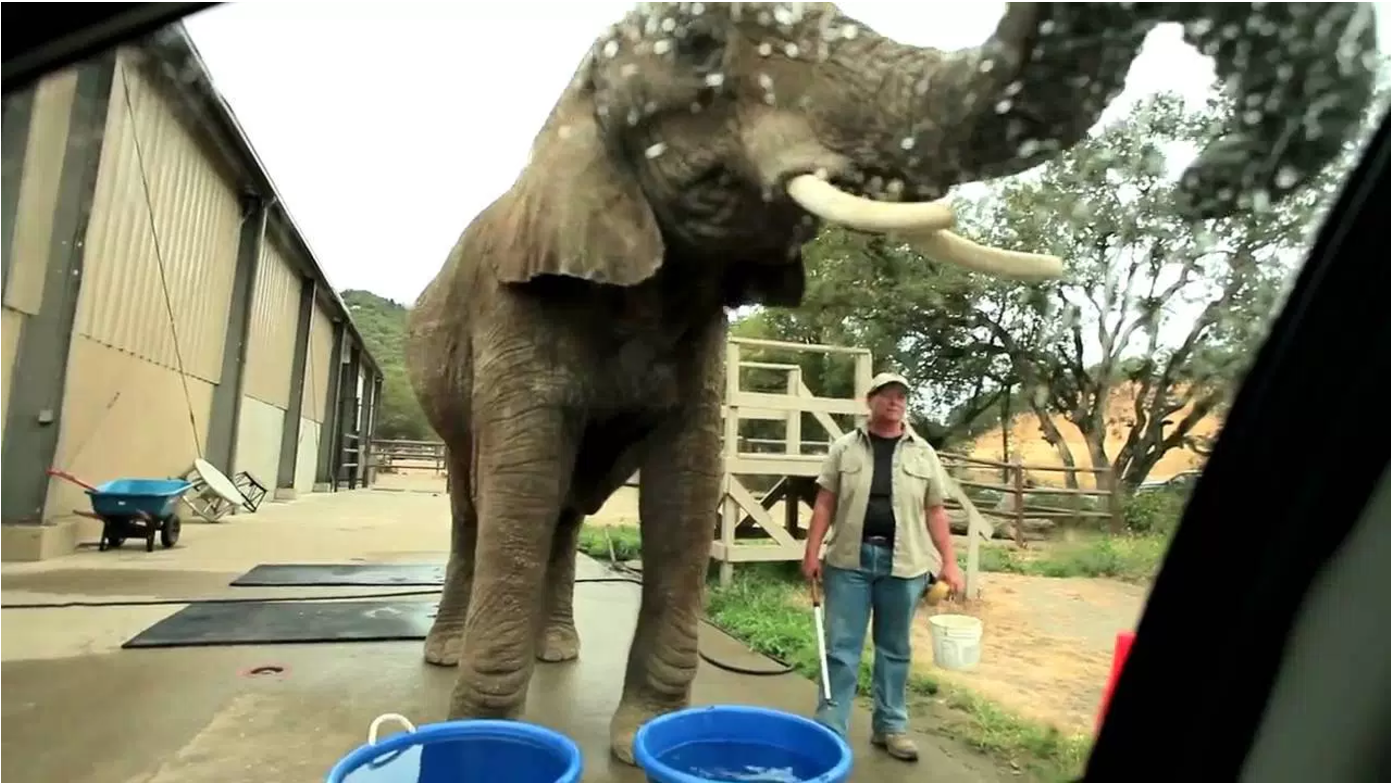 The elephants would not be washing cars if they weren’t being threatened with bull hooks. According to a petition on Care2, you can see in pictures and videos taken by visitors that the elephants are the car wash are monitored by park employees carrying bull hooks. These cruel devices (which have been banned in many states) are long rods with sharp hooks that are typically dug into the elephant’s soft skull or behind their ear. The elephants fear the pain of these hooks and therefore remain docile while interacting in totally unnatural situations.

It goes without saying that circus elephants live in an environment that is far from natural. Bound by chains and shipped from location to location via train prevents them from engaging in their most basic behaviors.

In order to control the elephants and limit their ability to move, workers tie heavy chains around the elephants’ ankles. Not only does this keep them in line while they are training, but it also prevents them from lying down or having normal social interactions with their fellow elephants.

According to the Wild Life Advocacy Project, “More often than not the elephants are chained on hard surfaces like cement instead of the soil their feet and joints are designed for. As a result, elephants suffer painful foot problems, arthritis, and other painful physical ailments.”

And just like all of the above seemingly innocent “tricks”, elephants forced to perform in the circus are “broken” with the use of a bullhook. Former circus employees have reported that in addition to being beaten, circus elephants are often denied food and water, “all to force them to learn their routines.” They learn quickly that if they want to eat or drink, then they must perform.

No animals deserve to suffer for the sake of our trivial entertainment. Not only are elephants extraordinarily complex animals, elephants are highly endangered in the wild due to ivory poaching. Knowing this, we need to do everything in our power to protect elephants in their wild habitat – and stop abusing them for our own personal greed and interests.

Your knowledge allows you to be the elephant’s voice, alerting others that this is not normal elephant behavior and the posted imagery was made possible because the elephant was forced to behave in unnatural ways. Be polite, and be accurate. This is a teaching opportunity: everyone can learn something important about elephants in captivity. It is likely they had absolutely no idea of the pain inflicted to obtain the “happy elephant” image. The goal is to increase numbers of captive elephant advocates, not shaming people into silence when their only crime is ignorance.

Elephants have many friends on social media, so don’t forget to share this post within your network to help educate others!