Old MacDonald’s Factory Farm: A Look Into Who’s Behind the World of Big Ag

The animal agriculture industry goes to great lengths to convince the public that farmed animals are raised on lush green pastures owned and operated by family farmers. From their deceptive product packaging to the hundreds of television advertisements they run every year, the animal agriculture industry desperately wants to perpetuate the myth of a benevolent Old MacDonald and his small farm of happy and healthy animals.

The reality is that a handful of extraordinarily powerful corporations own and control the entire industry, and often team up with influential trade and lobby organizations and even government agencies to shape the market to their benefit. Their tool of choice is the efficient but cruel factory farm, a far cry from familiar Old MacDonald’s farm.

Here’s a look at the major players that give “Big Ag” its well-deserved name.

Contrary to what Big Ag wants us to think, the entire animal agriculture industry is actually owned by a few massive corporations. For example, Tyson Foods, the largest meat-processing company in the world, controls 22 percent of all meat and poultry sales in the United States. Around 85 percent of beef sold in the United States is produced by Tyson, JBS, Cargill, or Smithfield Foods. Tyson is a publicly held corporation that boasts over $34 billion dollars in sales every year, and yet more than 70 percent of the company’s voting stock belongs to one person – the son of founder John Tyson.

Other animal agriculture industries reveal a similar story. Dean Foods, the leading producer of milk and other dairy products in the United States, controls 35 percent of the nation’s milk market, and markets its products under 50 different brand names. Cal-Maine Foods, the country’s largest producer of eggs, controls 23 percent of the egg market and owns over 35 million laying hens.

Despite what Big Ag wants us to think about where our food comes from, the truth is that it very likely comes from one of Big Ag’s powerhouse corporations, which have succeeded in pushing most family farms out of business by raising animals in cruelly efficient factory farms. 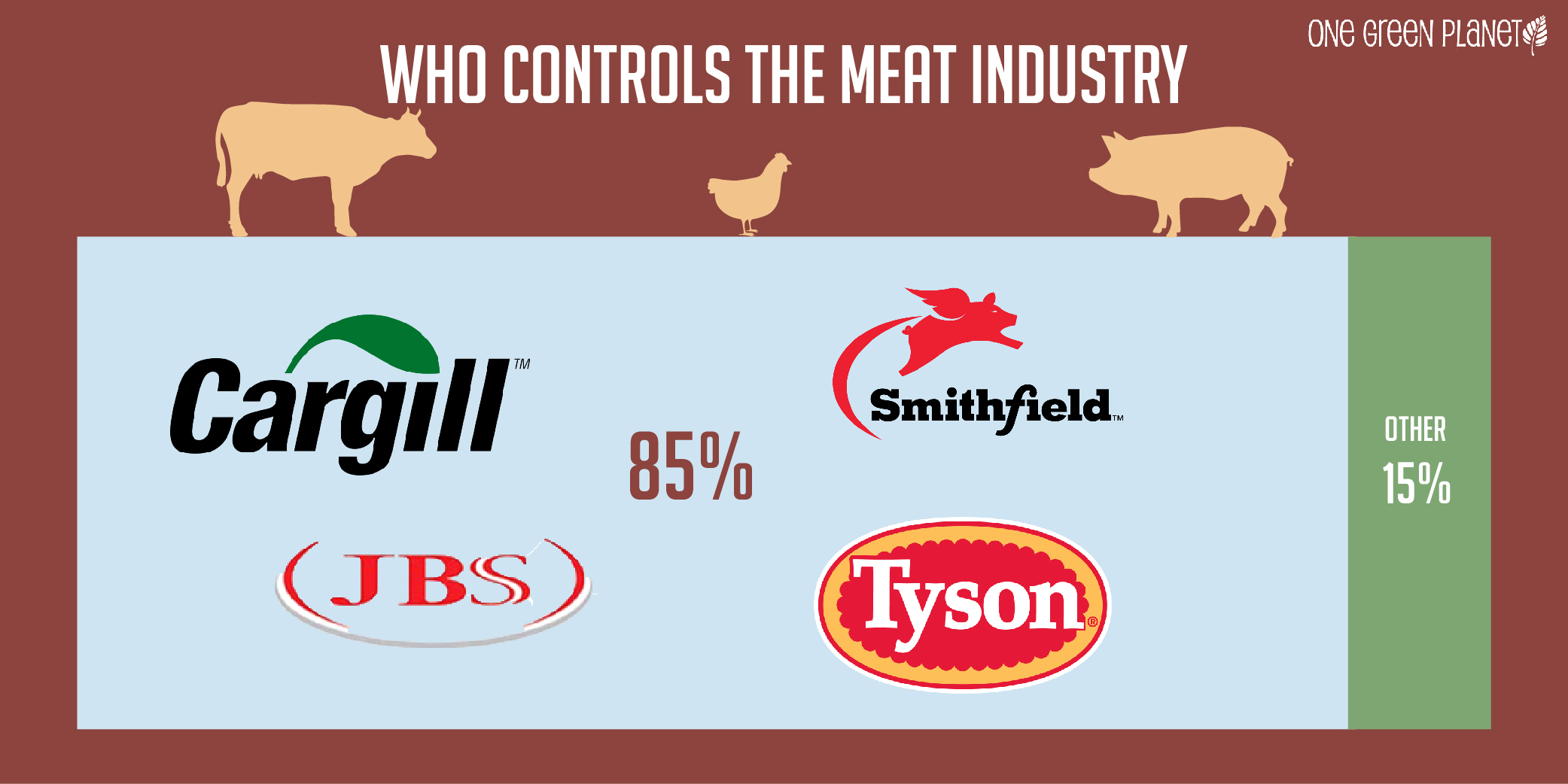 The Trade and Lobby Organizations

While the top animal agriculture corporations wield an extraordinary amount of power by themselves, they’ve teamed up with multiple trade and lobby organizations to expand their power, particularly in Washington, D.C. These organizations exist solely to increase industry profit and pass industry-friendly legislation. The National Milk Producers Federation’s motto is “Connecting Cows, Cooperatives, Capitol Hill, and Consumers,” and the United Egg Producers count as a goal establishing strong relationships with the USDA and FDA.

These organizations work their way into every aspect of our food market. For example, the International Dairy Foods Association recently lobbied heavily to ensure that chocolate milk was included as an option under the National School Lunch Program. When someone challenges industry practices, these organizations are standing by to shut dissenters down. The Texas Beef Group famously sued Oprah Winfrey after she dared question the industry practice of feeding rendered cows back to other cows (how dare she!). The Group lost the lawsuit, but succeeded in scaring other news and media sources from speaking out against the industry, illustrating the enormous power of these organizations and their role in sustaining Big Ag.

While not technically a part of Big Ag, certain U.S. government agencies are so instrumental to the success of the industry that they must be mentioned. In particular, the USDA is notorious for its tendency to cater to the interests of huge corporations such as Tyson. Currently headed by former Iowa governor and staunch Monsanto supporter Tom Vilsack, the USDA has repeatedly refused to require the industry to adhere to basic welfare standards and has consistently appointed industry-connected and funded individuals to the U.S. Dietary Guidelines Advisory Committee, the body charged with creating the government’s Dietary Guidelines.

Government-created and funded research and promotion boards have been established to increase demand for animal products, despite growing evidence of the negative health effects of these products. The American Egg Board seeks to “communicate the value of the incredible edible egg,” and the Milk Processor Education Board devoted millions of dollars to the “Got Milk?” campaign. No other industry receives this degree of preference and deference, illustrating the enormous power of Big Ag.

In the span of about 50 years, Big Ag has managed to get a stranglehold around the entire animal agriculture industry, shutting out small, family farms that can’t compete with economically efficient factory farms. Amazingly, the industry has managed to hide behind the ‘Old MacDonald’s farm’ myth for years, having cleverly convinced consumers that animals are still raised on the idyllic family farms that Big Ag has driven out of business. Working with trade and lobby organizations and government agencies, Big Ag has cemented its domination of the industry.

The easiest way to take a stand against Big Ag and the empire these huge corporations have managed to build is to stop buying their products. By eliminating animal products from your diet, or even minimizing your consumption of animal products you can help drive down consumer demand. Here are a few great recipes to get you started and help you say “No” to Big Ag!