How Animal Agriculture Is Draining the World of Biodiversity

There could be up to 100 million different species on Earth. Ranging from humans to algae and phytoplankton, the planet is filled with a broad array of extremely diverse organisms. While we might not always notice it, these millions of different beings play a unique and very important role in the symbiosis of the world’s ecosystems.

This biodiversity is what allows life to continue in balance despite changes in environment or influx of disease. Let’s think about this for a minute. Say a virus specific to the chestnut tree was to sweep through a forest. While the disease might wipe out these specific trees, the forest would not collapse completely because it is likely there are many other types of trees and plants present. The animals who called the chestnut tree home might need to find a new home, but transitioning to life in another tree would not be so bad.

Biodiversity enables resilience and helps to cushion the impact of the many variables life can through at us. However, more and more, the world’s biodiversity is being decreased because of human actions. Scientists have confirmed that human activities have brought about the sixth mass extinction of species on the planet – it is estimated that species are going extinct at a rate about 1,000 times faster than normal. As these species disappear, the planet’s biodiversity drops.

While habitat destruction could be listed as a uniquely human “specialty,” and it seems everything we do causes some form of damage – we can identify one of the major causes of biodiversity loss: animal agriculture.

Animal agriculture could be considered one of today’s modern conveniences. Looking for something to eat for dinner? Just head to the grocery store and you’ll find shelves and shelves of food ready for you to cook up and eat. There’s no need to worry about catching your dinner, some large corporation has already done that for you! What could be the problem with that?

Well, the problem is that out of convenience and trends in diet, meat production has grown to a scale that is highly unsustainable. The average American will consume 58 pounds of beef a year, when multiplied by the 319 million other Americans, that adds up to a huge demand for beef.

When you consider the fact that it takes up to 160 times more land resources to produce beef than any other food, the role that animal agriculture plays in biodiversity loss becomes much clearer.

Livestock take up space … we mean a LOT of space. In fact, they occupy about 45 percent of land worldwide. And these animals are not native to many of these regions (if any); they were brought there by humans. So, for these animals to be on this land, something else needed to go.

To protect lands designated for cattle grazing, the American wild horse has been subject to countless round-ups, and native wolf and coyotes have been hunted into oblivion. When these species disappear, biodiversity drops and the fundamental function of native ecosystems are altered (usually for the worse). 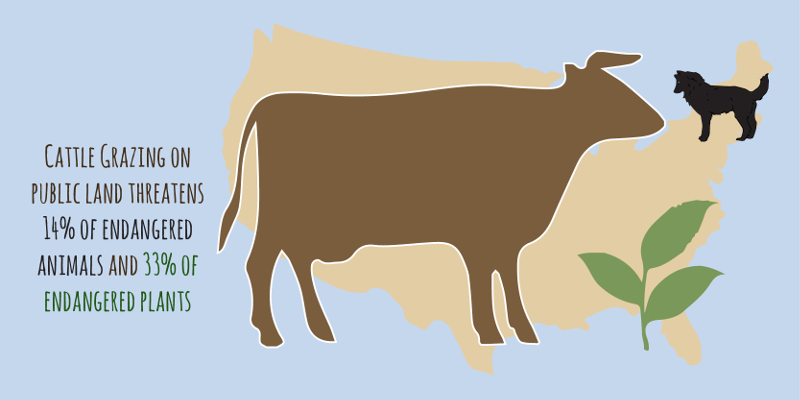 Another major player in the disappearance of the world’s biodiversity is the production of livestock feed. Yes, the crops that are grown to feed the animals that are pushing other species out of their native habitats are causing problems too.

Around 99 percent of chickens, 99 percent of turkeys, 78 percent of cattle, and 98 percent of pigs in the United States are raised in factory farms. Efficiency is the goal in raising these animals, so there are fed a diet predominantly composed of wheat, corn, and soy (with some antibiotics and hormones) to make these animals reach market weight more quickly.

Seeing as there are 42 million cows raised in factory farms every year, and 100 calories of grain are needed to produce just three calories of beef – the demand for feed is pretty high.

Because corn and soy are grown at such a large scale, with very little variation, these crops are at high risk of disease. To combat potential insect infestations or the spread of fungus, companies like Monsanto have developed not only special strains of corn and soy that are “naturally” resistant to disease, they have also created chemical pesticides for “extra” protection (we won’t get into the host of damage this is doing to the world’s species). 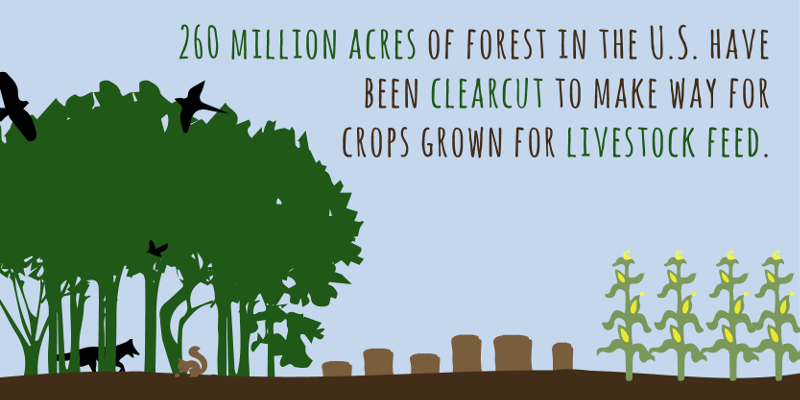 So, What Can YOU Do About This?

It can seem like all of the cards are stacked against you on this one, but this is hardly the case. Humans have shown we have the power to inflict damage on the world, but in turn, we also have the power to heal that damage. Now that you know how animal agriculture is causing the world to loss it’s precious biodiversity, you can help to repair the damage done by removing your personal diet from the equation.

As Nil Zacharias, Editor-in-Chief and Co-founder of One Green Planet says,”When we draw the parallels between species conservation and our food choices to demonstrate how by lowering our demand for destructive food products, we can start to heal our broken food system and give species a fighting chance for survival.”

We can all make a difference right now, by choosing plant-based foods when we eat. To learn more about how you can use your next meal to protect species, join One Green Planet’s #EatForThePlanet movement, here.