8 Tasty Fall Veggies and Their Health Benefits (with Plant-Based Recipes!) 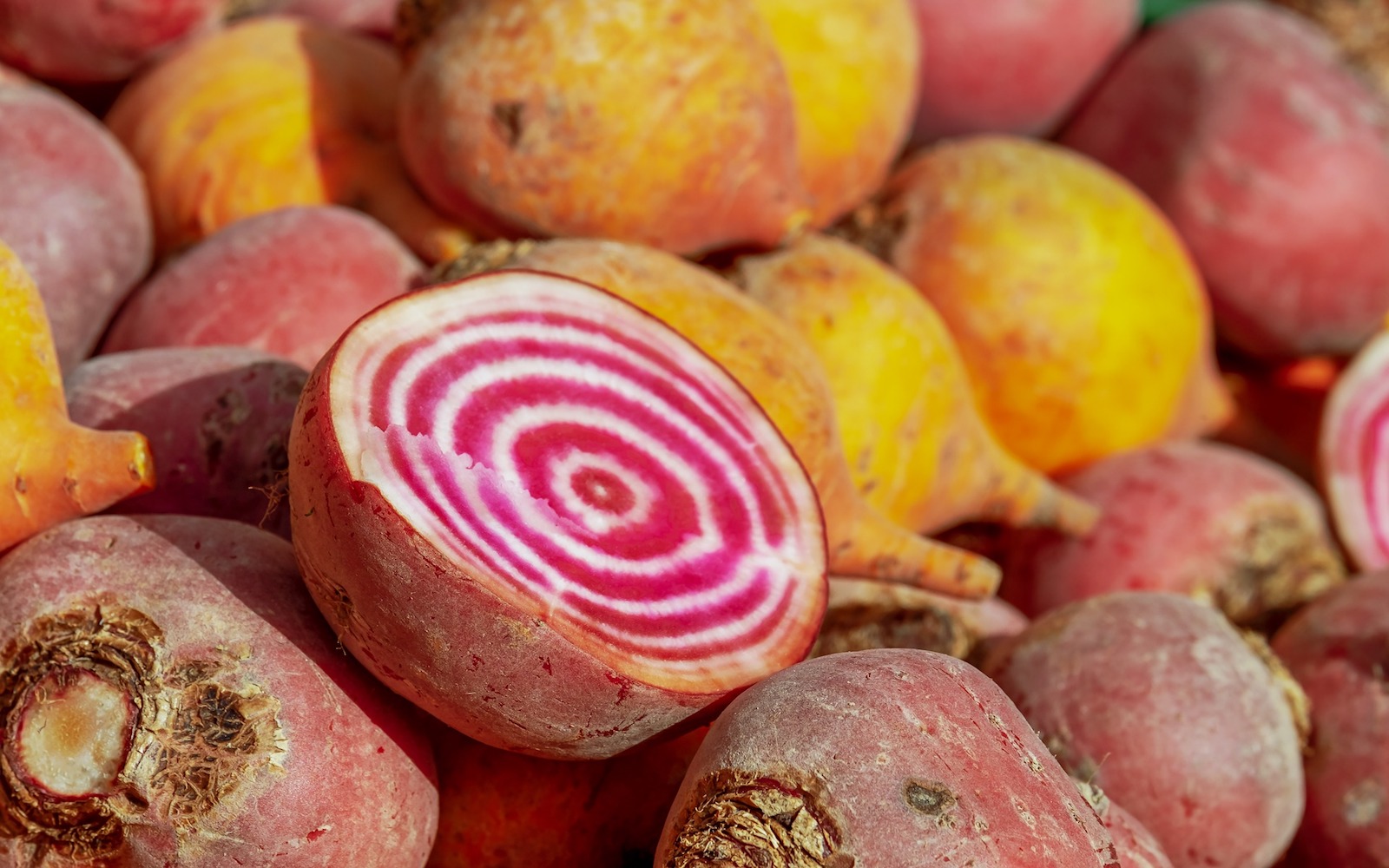 As the days grow shorter and the air cooler, a colorful array of fresh veggies comes into season–and with it, a multitude of health benefits! From beets to squash to Brussels sprouts, here are 8 nutritious and delicious fall veggies to try out this season, along with information on health benefits and some delicious recipes from the Food Monster App to give you a colorful dose of inspiration as the leaves change color.

With its sweet orange flesh, soft and smooth in texture, butternut squash is a delicious fall staple to add to your kitchen. The word “squash” comes from the Narragansett Native American word “askutasquash,” which translates roughly to “eaten raw or uncooked.” Butternut squash belongs to the Cucurbita moschata species, and was the result of a farmer in the mid-1940s crossing a gooseneck squash with other squashes, resulting in this exceptionally sweet and soft variety. Butternut squash is jam-packed with vitamin A, and one cup of cooked squash contains a whopping 457% of the RDA. It is also rich in antioxidants and a good source of both soluble and insoluble fiber, making it beneficial for digestion. It is a versatile and nourishing fall veggie that can be used in both savory and sweet ways!

Here’s an interesting fact about these humble root veggies–in the times of Ancient Rome, they were frequently used as makeshift weapons to hurl at unpopular political figures, partially because they were considered to be a “common” vegetable typically eaten by poor country dwellers. Turnips are part of the cabbage family, Brassicaceae, and eventually became an important crop for both humans and animals to consume, with the leaves, roots, and seeds all being utilized in some way. They come in several different colors, ranging from white to purple to orange. Turnips are an excellent source of vitamin K, with one cup containing 662% of the RDA. They are also a good source of fiber and are high in glucosinolate compounds, which may help slow the growth of cancerous cells.

For recipe ideas, try out these stir-fried Turnips With Caramelized Onions and Toasted Lentils, or whip up a batch of gluten-free Chickpea Turnip Meatballs.

These long green veggies originated in Central and South America thousands of years ago, and by the 17th century, they were popular in Greece, Turkey, and Italy. They have also been known as “string beans” due to a long fibrous string that ran through the middle of the bean, and that was removed before cooking. However, most modern varieties of green beans have been specifically bred to develop without this string. Green beans are an excellent source of vitamin K, and also contain significant amounts of the mineral silicon, which supports strong bones and connective tissue. In addition, they are a good source of fiber, making them beneficial for digestion, and contain other phytonutrients such as carotenoids and flavonoids.

For recipe ideas, sink your teeth into these Green Beans and Potatoes in Creamy Peanut Sauce, or try some Chinese Homestyle Stir-Fried Eggplant and Green Beans.

These sweet root veggies have been around for thousands of years, and originated in Central and South America, though scientists have also found evidence that the Polynesians traveled to this continent as far back as 1000 A.D. and brought the sweet potato to their home country to cultivate. Sweet potatoes come in multiple varieties and colors ranging from white to orange to red. Contrary to what some grocery stores might have you believe, sweet potatoes and yams are not the same things! True yams have bumpy brown skin, and their flesh is starchy, not sweet. So read the labels carefully, and remember that if it’s labeled a “yam,” it is most likely just an orange sweet potato. In terms of nutrition, sweet potatoes are an excellent source of vitamin A, with roughly 200% of the RDA per cup, and are also a good source of fiber and potassium. They are also high in antioxidants, especially purple-fleshed sweet potatoes.

For recipe ideas, try making these hearty Curried Lentil Stuffed Sweet Potatoes, or whip up a delicious fall dessert with these Baked Sweet Potatoes and Cranberries With Cinnamon Oat Crumble.

These vibrantly colored root veggies, usually either loved or hated for their rich and earthy flavor, are native to the Mediterranean region, and although beet leaves have been consumed since before history began to be written down, the root was only used medicinally until the time of the Ancient Romans. The Romans considered beets to be an aphrodisiac, and given that beets contain a high amount of tryptophan, a substance that “promotes a feeling of well-being,” they may not have been far off the mark! Beets are rich in phytonutrients called betalains, which have antioxidant and anti-inflammatory benefits, and also may reduce the risk of certain types of cancer. They are also a good source of manganese and folate (one of the B vitamins), and contain a high amount of fiber, which promotes a healthy digestive system.

For recipe ideas, try out this antioxidant-loaded Turmeric Polenta with Roasted Beets and Greens, or make some tasty Beet Borani: Azerbaijan Yogurt Dip With Beets and Herbs.

The humble carrot, despite being well-known for its orange hue, was originally yellow, white, and purple in color–it was only in the 17th century that Dutch growers began to cultivate orange carrots as a tribute to William the Orange, who helped lead the fight for independence against the Spaniards. Carrots originated in the 10th century in Persia and Asia Minor, though again, they looked very different from the carrot of today. In addition to their delicious flavor, carrots are rich in vitamin A, mostly in the form of of beta-carotene, an antioxidant that the body converts into vitamin A, which contributes to better eye health and vision. They may also reduce the risk for cardiovascular disease, and are a good source of fiber.

For recipe ideas, try out this rich and comforting Buckwheat With Roasted Heirloom Carrots and Miso Mushroom Gravy, or make some simple Skillet-Roasted Chili Carrots.

This often misunderstood and maligned cruciferous veggie is closely related to cabbage, and though its exact origin is unknown, it was named after the city of Brussels, Belgium, where they were first widely cultivated in the 16th century. They are sometimes sold in stores still attached to the long stalk on which they grow, and in the U.S. are mostly grown on Long Island in New York. Nutritionally speaking, Brussels sprouts are an excellent source of vitamin K (137% of the RDA per half-cup), which is beneficial for both blood clotting and bone health. They also contain phytonutrients called organosulfur compounds, which have powerful antioxidant properties and can “protect your cells from oxidative stress, a type of damage that can harm your DNA.” Though some may have bad memories of Brussels sprouts, when properly cooked (not boiled to a mush!) they are delicious and flavorful.

This leafy green vegetable, despite being a recent trend in the 21st century, has been around for thousands of years, and is a descendent of wild cabbage, which originated in Europe and Asia Minor. Kale was grown by the Ancient Greeks and Romans, later spreading to other parts of Europe, and grows best in cooler conditions, making it a hardy crop that thrives on frost and (mild) winter weather. Kale is an incredibly good source of vitamin K (over 600% of the RDA per cup!), which is beneficial for bone health, and can also help detoxify the body due to its potassium content. Kale also has anti-inflammatory properties and, per calorie, contains more iron than beef. Talk about a nutritional powerhouse!

For recipe ideas, try out this rich and spicy Sweet Potato Kale Curry, or, for a tasty snack, make some Cheesy Pizza Kale Chips.

If you’re seeking out related articles, check out 10 Rocking Fall Recipes with Root Vegetables, or take a step to look Beyond Pumpkin: Other Seasonal Fall Vegetables You Should Be Using and How To Use Them.